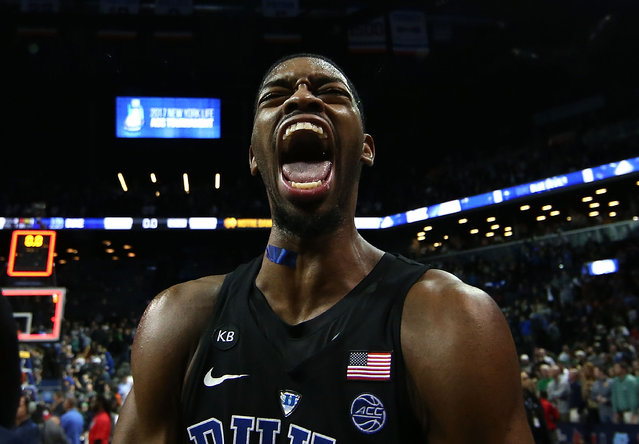 Amile Jefferson #21 of the Duke Blue Devils celebrates their 75-69 win over the Notre Dame Fighting Irish in the championship game of the 2017 Men's ACC Basketball Tournament at the Barclays Center on March 11, 2017 in New York City. (Photo by Al Bello/Getty Images) 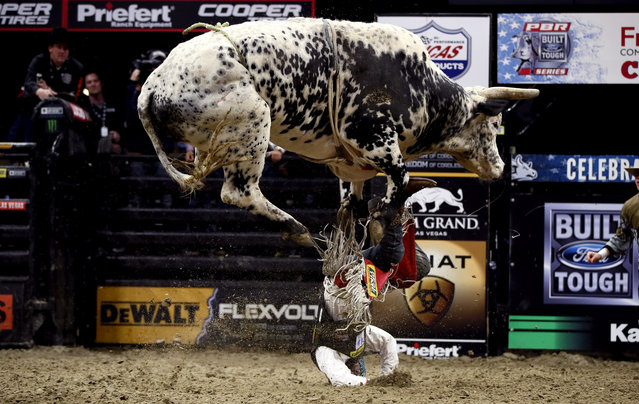 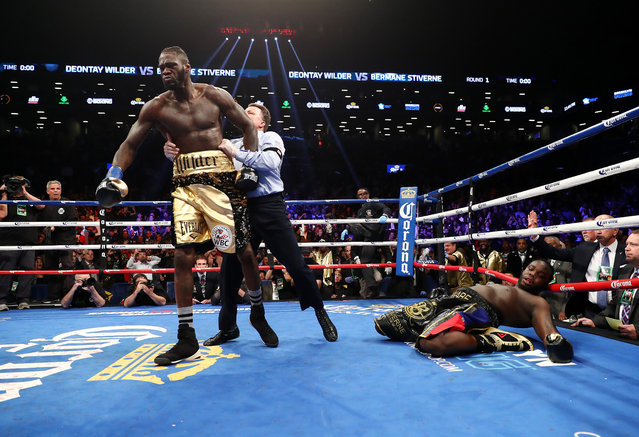 Deontay Wilder knocks out Bermane Stiverne in the first round during their rematch for Wilder's WBC heavyweight title at the Barclays Center on November 4, 2017 in the Brooklyn Borough of New York City. (Photo by Al Bello/Getty Images) 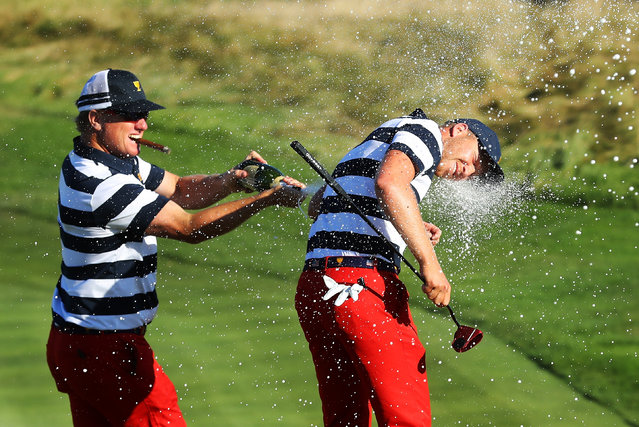 Charlie Hoffman sprays Daniel Berger of the U.S. Team with champagne after Berger defeated Si Woo Kim of South Korea and the International Team on the 17th hole 2&1 to give the U.S. Team the clinching point to win the Presidents Cup during Sunday singles matches at Liberty National Golf Club on October 1, 2017 in Jersey City, New Jersey. (Photo by Sam Greenwood/Getty Images) 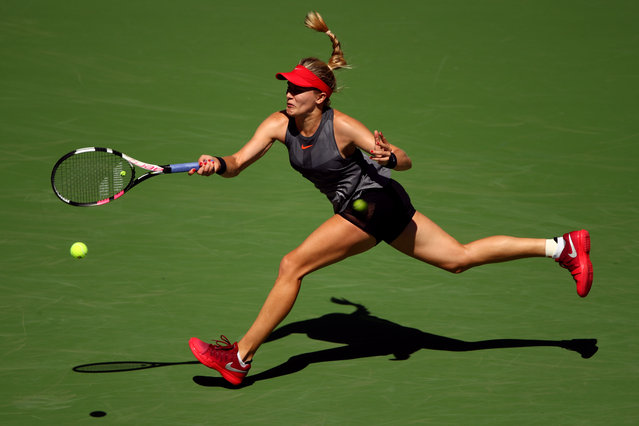 Eugenie Bouchard of Canada returns a shot to Evgeniya Rodina of Russia during their first round Women's Singles match on Day Three of the 2017 US Open at the USTA Billie Jean King National Tennis Center on August 30, 2017 in the Flushing neighborhood of the Queens borough of New York City. (Photo by Clive Brunskill/Getty Images) 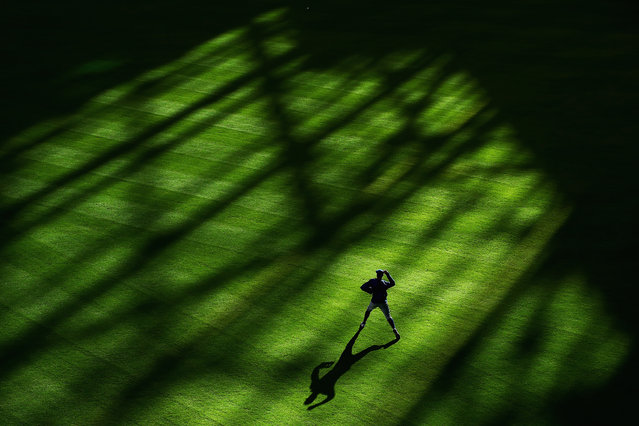 The Los Angeles Dodgers warm up before game five of the 2017 World Series against the Houston Astros at Minute Maid Park on October 29, 2017 in Houston, Texas. (Photo by Ezra Shaw/Getty Images) 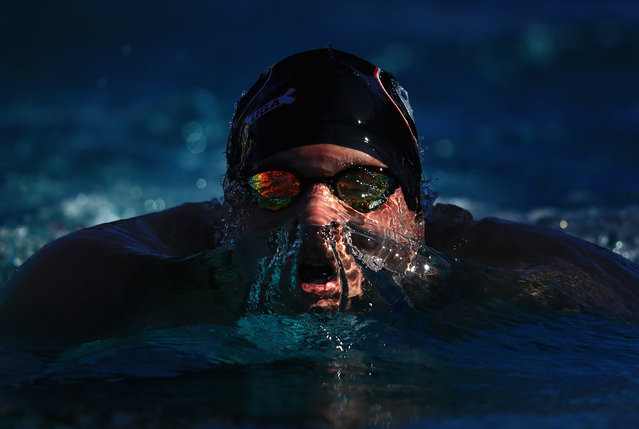 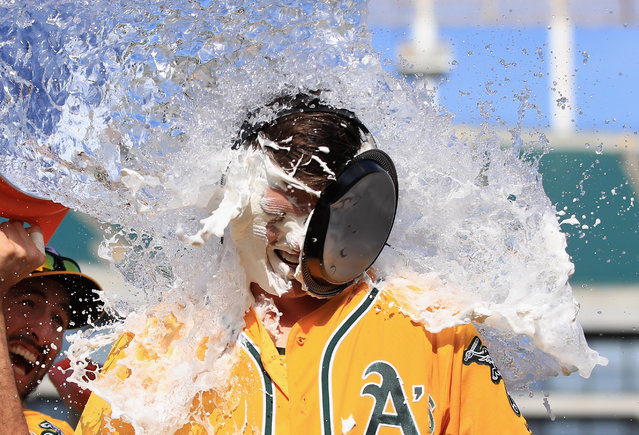 Ryon Healy #25 of the Oakland Athletics is covered in water by Adam Rosales #16 after he hit a walk-off home run in the ninth inning against the Detroit Tigers at Oakland Alameda Coliseum on May 7, 2017 in Oakland, California. (Photo by Ezra Shaw/Getty Images) 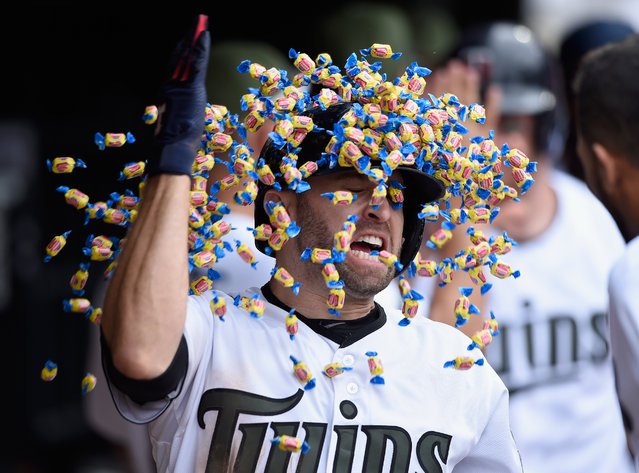 Brian Dozier #2 of the Minnesota Twins celebrates hitting a two-run home run against the Tampa Bay Rays during the eighth inning of the game on May 27, 2017 at Target Field in Minneapolis, Minnesota. The Twins defeated the Rays 5-3. (Photo by Hannah Foslien/Getty Images) 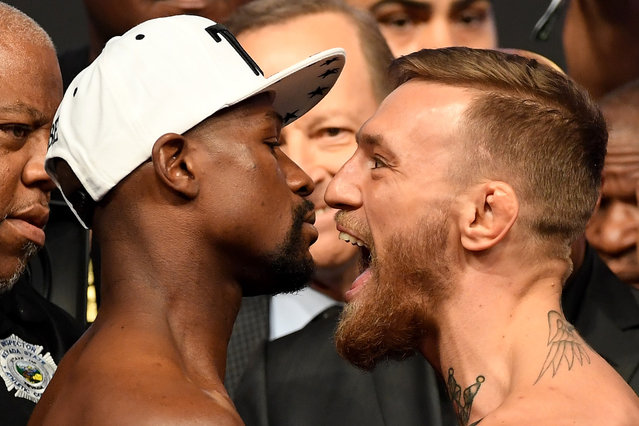 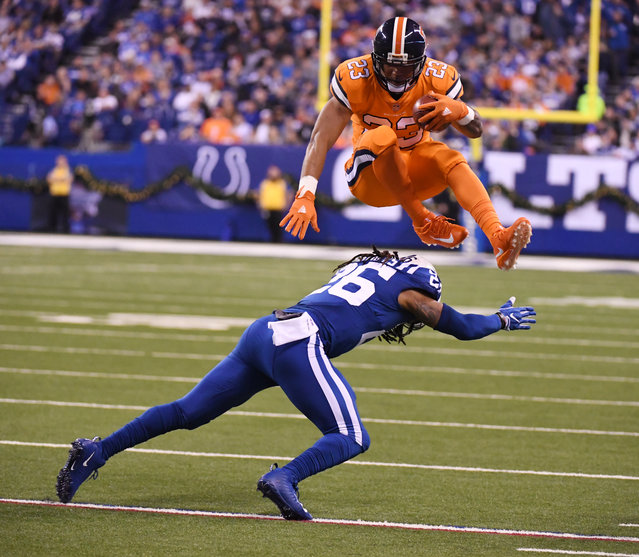 Denver Broncos running back Devontae Booker (23) leaps over Indianapolis Colts free safety Clayton Geathers (26) to avoid the tackle during the second quarter on December 14, 2017 in Indianapolis, Indiana at Lucas Oil Stadium. Booker ran it in for the touchdown but was called back due to a penalty on the play. (Photo by John Leyba/The Denver Post) 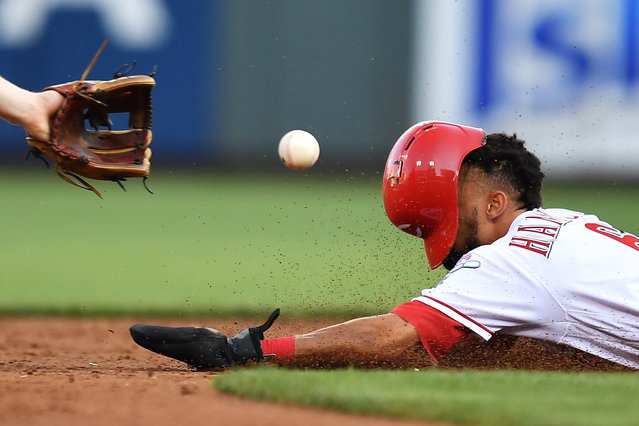 Billy Hamilton #6 of the Cincinnati Reds steals second base in the second inning against the Washington Nationals at Great American Ball Park on July 15, 2017 in Cincinnati, Ohio. (Photo by Jamie Sabau/Getty Images) 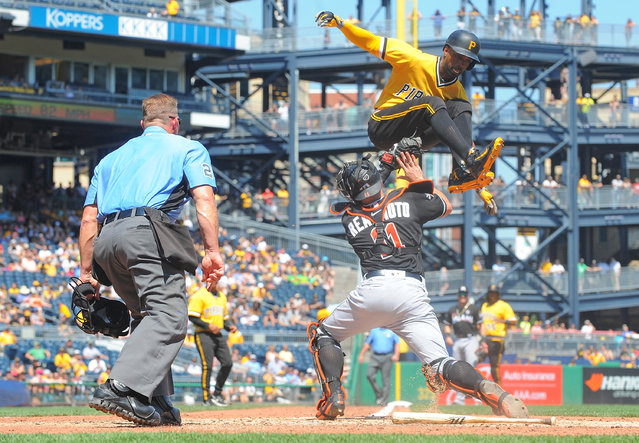 Andrew McCutchen #22 of the Pittsburgh Pirates is tagged out at home plate by J.T. Realmuto #11 of the Miami Marlins as part of a double play in the sixth inning during the game PNC Park on June 11, 2017 in Pittsburgh, Pennsylvania. (Photo by Justin Berl/Getty Images) 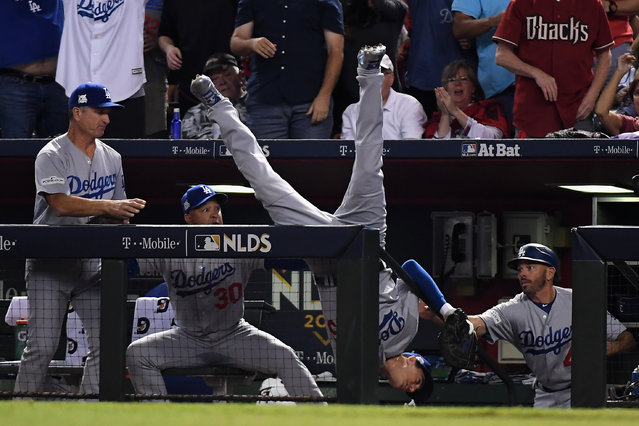 Cody Bellinger #35 of the Los Angeles Dodgers tumbles into the dugout after catching a foul ball during the fifth inning of the National League Divisional Series game three against the Arizona Diamondbacks at Chase Field on October 9, 2017 in Phoenix, Arizona. (Photo by Norm Hall/Getty Images) 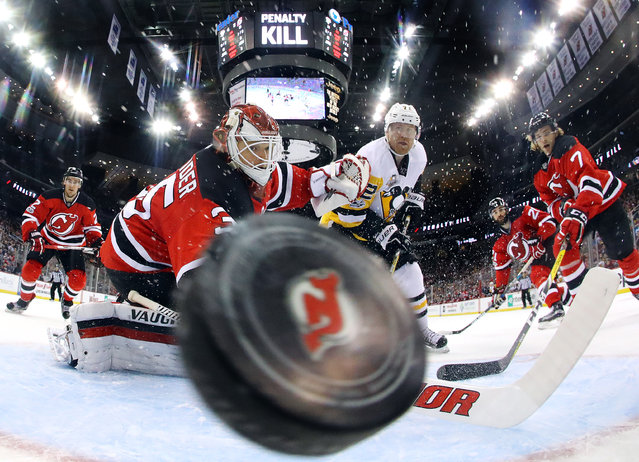 Patric Hornqvist #72 of the Pittsburgh Penguins scores on the powerplay at 7:45 of the second period against Cory Schneider #35 of the New Jersey Devils at the Prudential Center on April 6, 2017 in Newark, New Jersey. (Photo by Bruce Bennett/Getty Images) 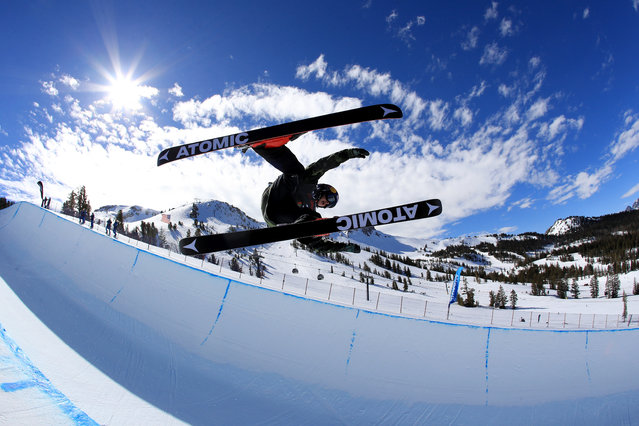 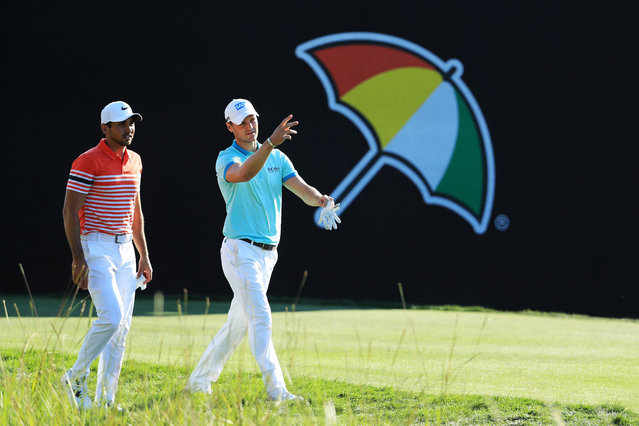 Jason Day of Australia and Martin Kaymer of Germany walk on the 18th hole during the second round of the Arnold Palmer Invitational Presented By MasterCard at Bay Hill Club and Lodge on March 17, 2017 in Orlando, Florida. (Photo by Richard Heathcote/Getty Images) 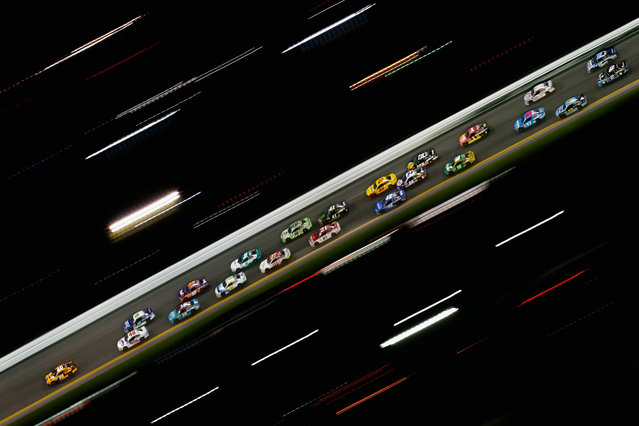 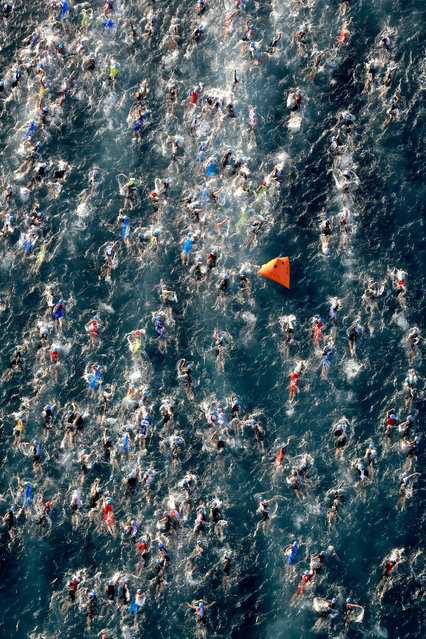 An aeriel view of the IRONMAN World Championship on October 14, 2017 in Kailua Kona, Hawaii. (Photo by Sean M. Haffey/Getty Images for IRONMAN) 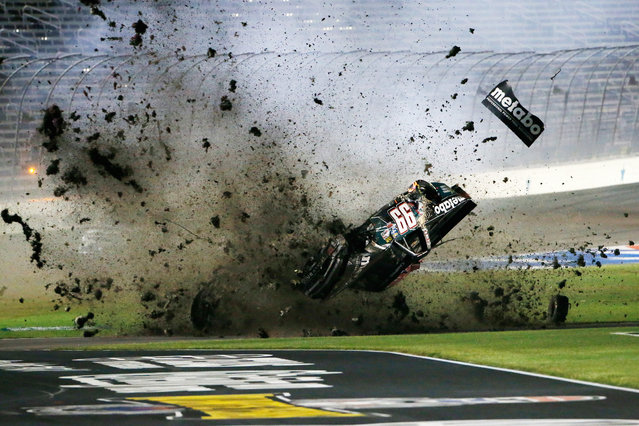