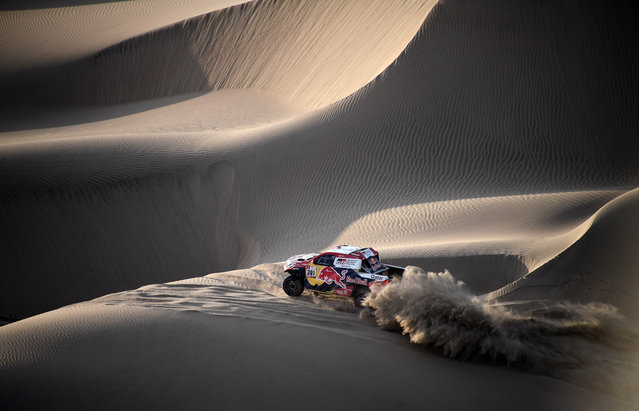 Toyota's Qatari driver Nasser Al-Attiyah and French co-driver Mathieu Baumel ride through the dunes of Tanaca during the 2018 Dakar Rally Stage 5 between San Juan De Marcona and Arequipa in Peru, on January 10, 2018. (Photo by Franck Fife/AFP Photo via Getty Images) 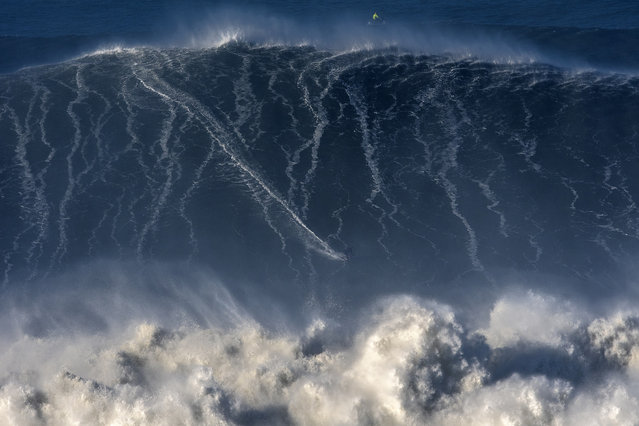 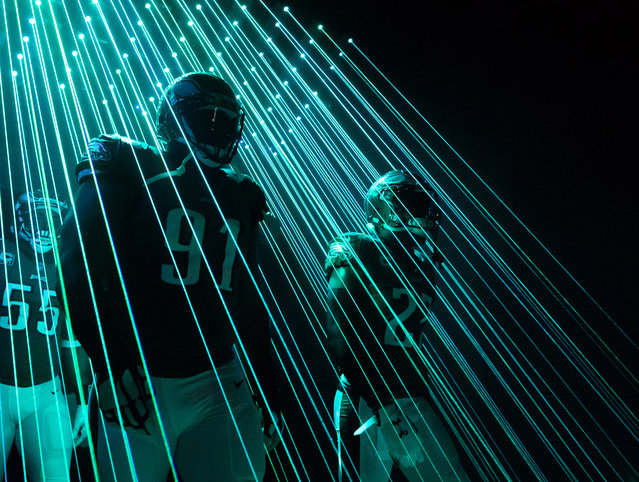 Fletcher Cox #91 and Malcolm Jenkins #27 of the Philadelphia Eagles walks out on to the field prior to the NFC Championship game against the Minnesota Vikings at Lincoln Financial Field on January 21, 2018 in Philadelphia, Pennsylvania. (Photo by Al Bello/Getty Images) 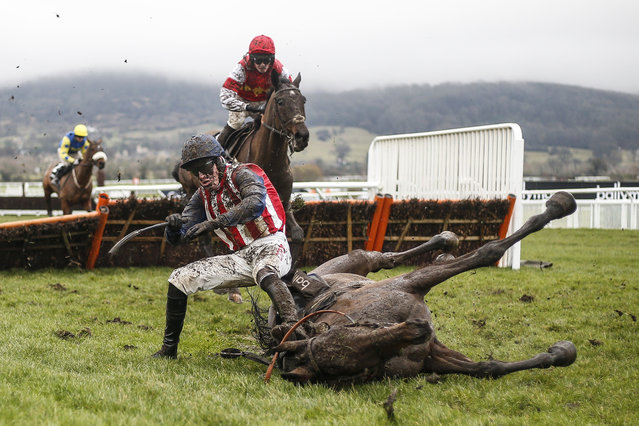 Nick Scholfield falls from De Rasher Counter at the last in The Ballymore Classic Novices' Hurdle Race at Cheltenham racecourse on January 27, 2018 in Cheltenham, England. (Photo by Alan Crowhurst/Getty Images) 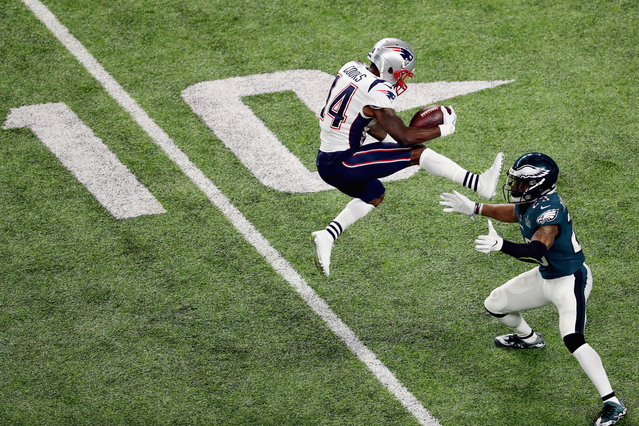 Brandin Cooks #14 of the New England Patriots is stopped by Rodney McLeod #23 of the Philadelphia Eagles as he attempts to leap over the tackle try during the second quarter of Super Bowl LII at U.S. Bank Stadium on February 4, 2018 in Minneapolis, Minnesota. (Photo by Christian Petersen/Getty Images) 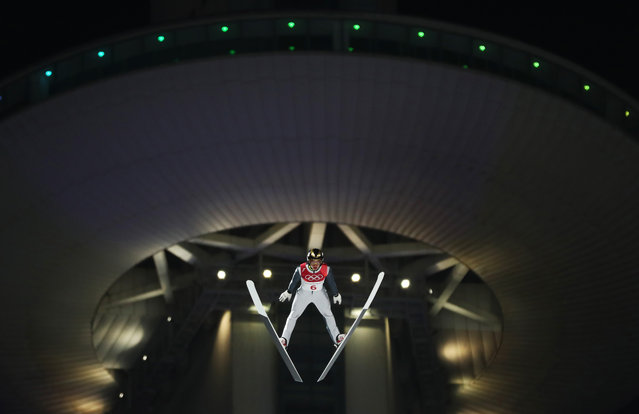 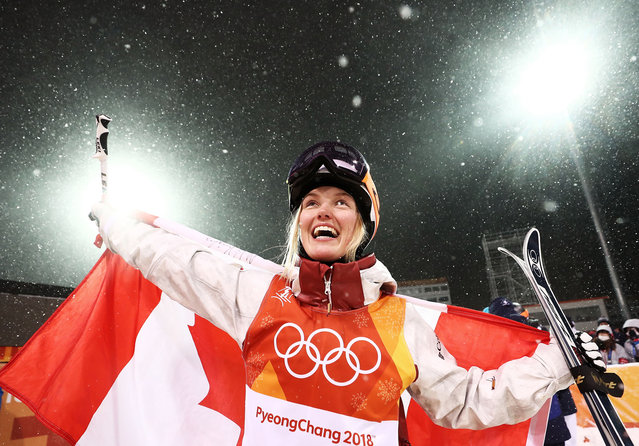 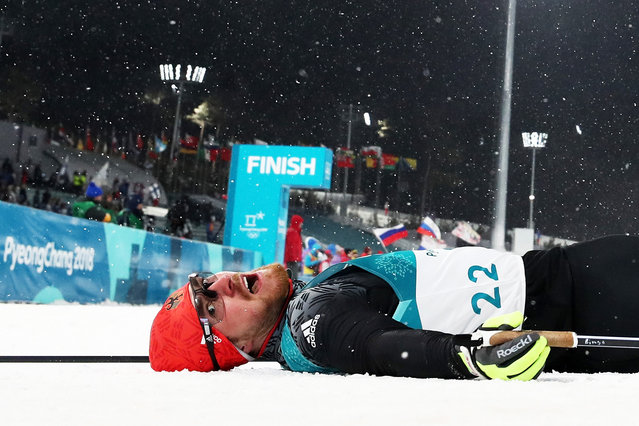 Thomas Bing of Germany lays on the snow during the Cross-Country Men's Sprint Classic Quarterfinal on day four of the PyeongChang 2018 Winter Olympic Games at Alpensia Cross-Country Centre on February 13, 2018 in Pyeongchang-gun, South Korea. (Photo by Al Bello/Getty Images) 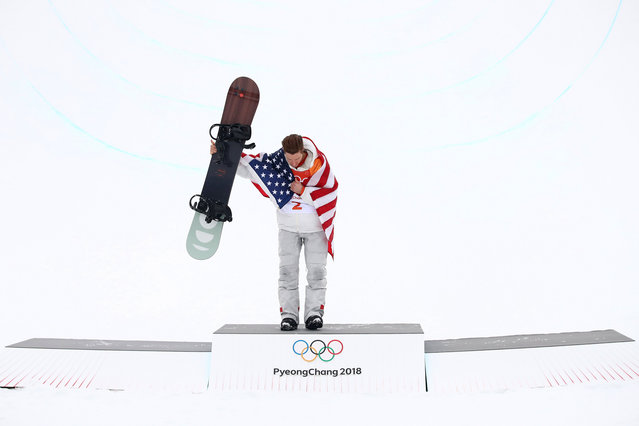 Gold medalist Shaun White of the United States poses during the victory ceremony for the Snowboard Men's Halfpipe Final on day five of the PyeongChang 2018 Winter Olympics at Phoenix Snow Park on February 14, 2018 in Pyeongchang-gun, South Korea. (Photo by Cameron Spencer/Getty Images) 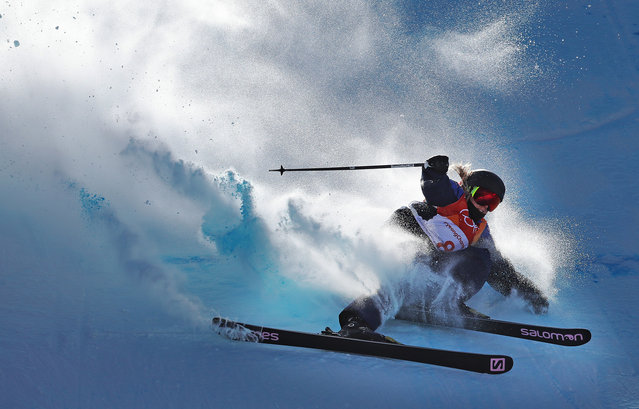 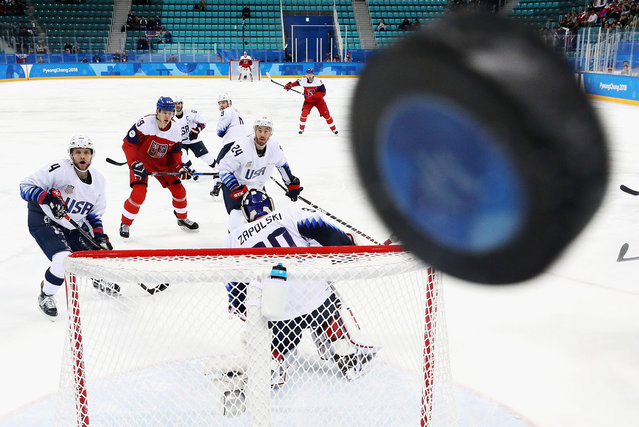 Players watch as the puck hits the glass in the first period of the Men's Play-offs Quarterfinals between the Czech Republic and the United States on day twelve of the PyeongChang 2018 Winter Olympic Games at Gangneung Hockey Centre on February 21, 2018 in Gangneung, South Korea. (Photo by Ronald Martinez/Getty Images) 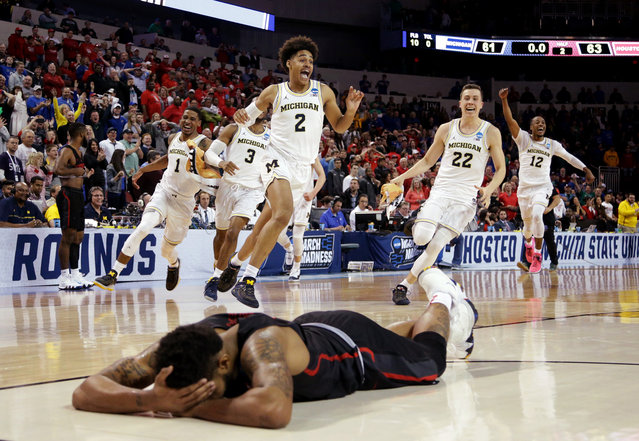 Jordan Poole #2 and teammates of the Michigan Wolverines celebrate Poole's 3-point buzzer beater for a 64-63 win as Devin Davis #15 of the Houston Cougars is seen on the ground during the second round of the 2018 NCAA Men's Basketball Tournament at INTRUST Bank Arena on March 17, 2018 in Wichita, Kansas. (Photo by Jeff Gross/Getty Images) 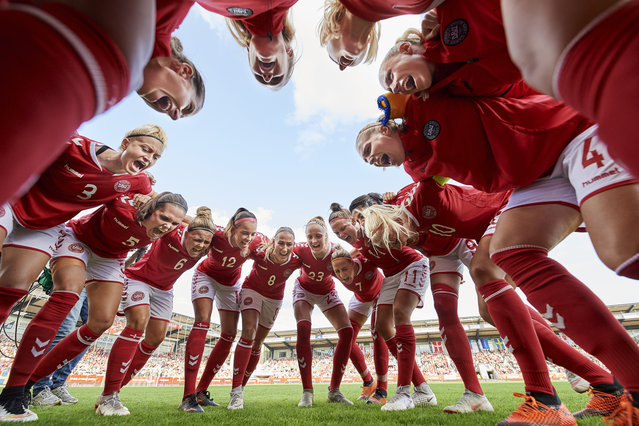 The players of Denmark huddle prior to the FIFA Women's World Cup qualifier match between Denmark and Sweden at Viborg Stadion on September 4, 2018 in Viborg, Denmark. (Photo by Lars Ronbog/FrontZoneSport via Getty Images) 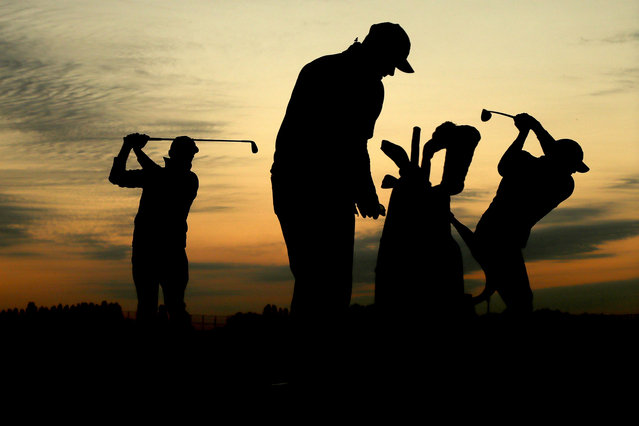 Rickie Fowler and Brooks Koepka of the United States practice on the range prior to the morning fourball matches of the 2018 Ryder Cup at Le Golf National on September 28, 2018 in Paris, France. (Photo by Jamie Squire/Getty Images) 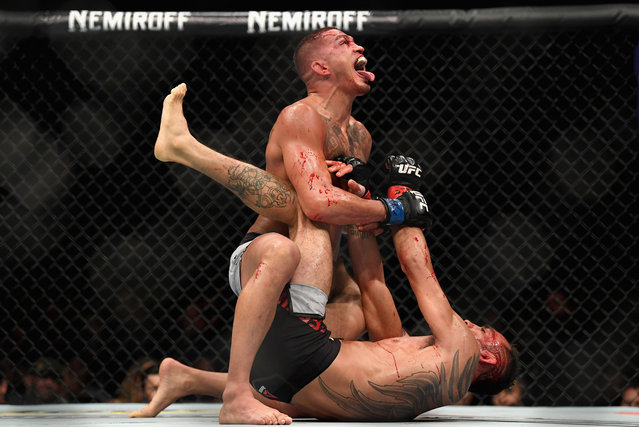 Anthony Pettis reacts as he has Tony Ferguson down on the mat in their lightweight bout during the UFC 229 event inside T-Mobile Arena on October 6, 2018 in Las Vegas, Nevada. (Photo by Harry How/Getty Images) 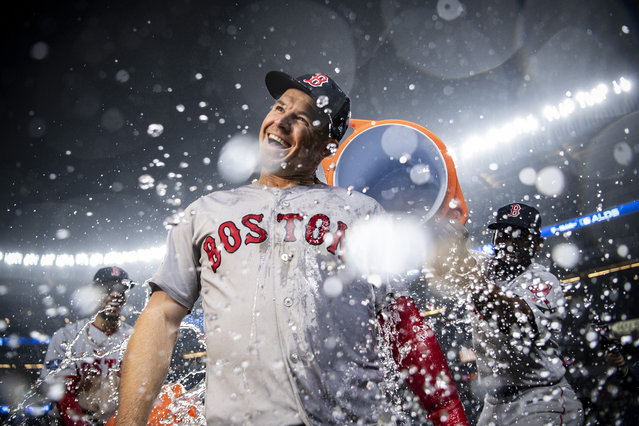 Brock Holt #12 of the Boston Red Sox is doused with Gatorade after hitting for the cycle after game three of the American League Division Series against the New York Yankees on October 8, 2018 at Yankee Stadium in the Bronx borough of New York City. (Photo by Billie Weiss/Boston Red Sox/Getty Images) 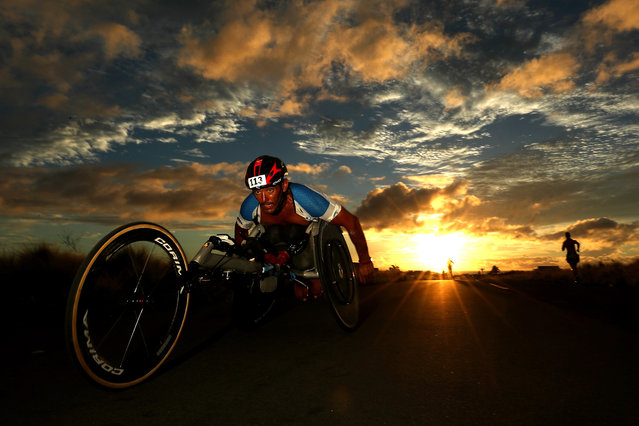 Andaloussi Ahmed competes during the IRONMAN World Championships brought to you by Amazon on October 13, 2018 in Kailua Kona, Hawaii. (Photo by Al Bello/Getty Images for IRONMAN) 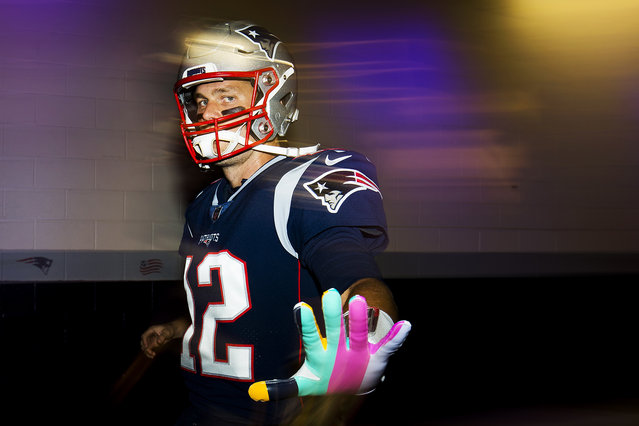 Tom Brady #12 of the New England Patriots walks through the tunnel towards the field before a game against the Kansas City Chiefs at Gillette Stadium on October 14, 2018 in Foxborough, Massachusetts. (Photo by Adam Glanzman/Getty Images) 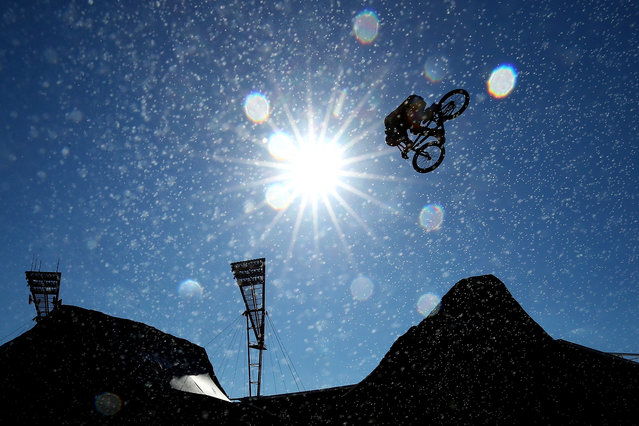 Alex Nikulin of Russia competes in the BMX Dirt qualifying during the X Games Sydney 2018 at Sydney Olympic Park on October 19, 2018 in Sydney, Australia. (Photo by Cameron Spencer/Getty Images) 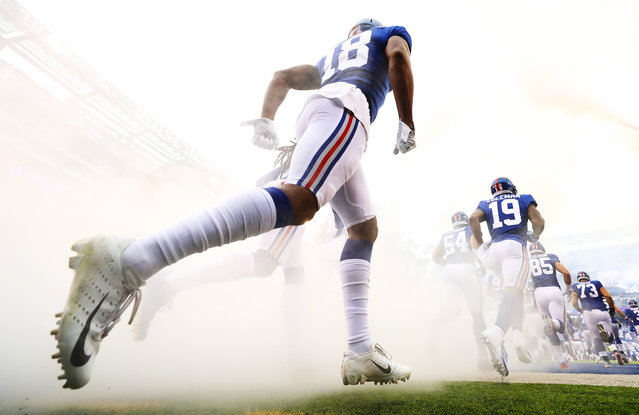 Bennie Fowler #18 of the New York Giants takes the field with the rest of his team against the Washington Redskins during their game at MetLife Stadium on October 28, 2018 in East Rutherford, New Jersey. (Photo by Al Bello/Getty Images)
Edit Del
24 Dec 2018 05:14:00, post received 0 comments
Publication archive:
←   →
Popular tags:
All tags
Last searches: