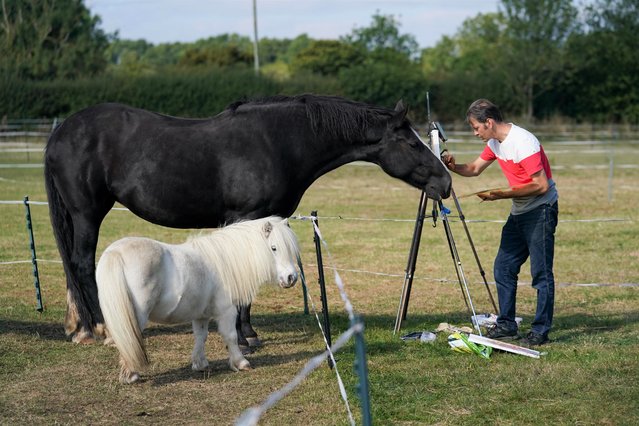 A local artist paints a horse at specialist trauma charity The Way of The Horse, in Lutterworth, Leicestershire on Wednesday, September 22, 2021. (Photo by Jacob King/PA Images via Getty Images) 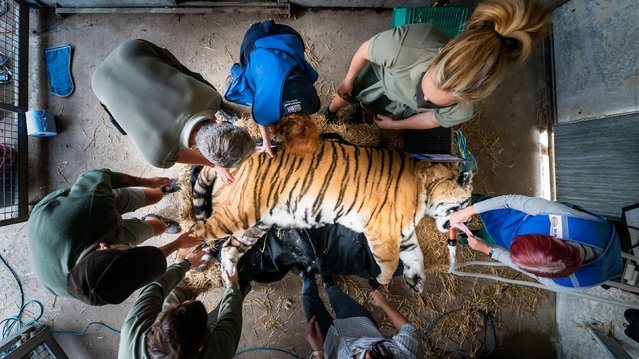 Vladimir, an Amur tiger, lies sedated during a procedure at Yorkshire Wildlife Park on Wednesday, September 15, 2021 where vets and specialists x-rayed his spine. (Photo by Danny Lawson/PA Images via Getty Images) 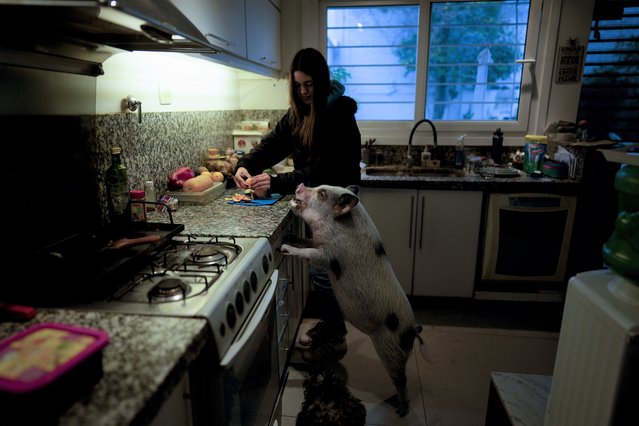 Luciana Benetti, 16, feeds her pet pig Chanchi, given to her for a birthday present the previous year in Buenos Aires, Argentina, Saturday, September 4, 2021. As the new coronavirus began to circulate last year, Benetti found her plans for a big traditional 15th birthday party scrapped. In its place, her parents gave her a pig. (Photo by Natacha Pisarenko/AP Photo) 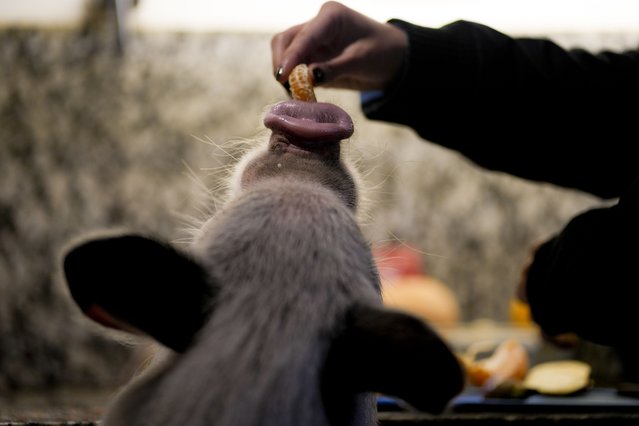 Luciana Benetti, 16, feeds her pet pig Chanchi, which was given to her as a birthday gift the previous year during the COVID-19 lockdown, in Buenos Aires, Argentina, Saturday, September 4, 2021. Without Chanchi, “I wouldn't be me”, said Benetti, who often sleeps alongside the 20-kilo (45-pound) Juliana pig that greets her with a squeal of delight when she arrives at her house. (Photo by Natacha Pisarenko/AP Photo) 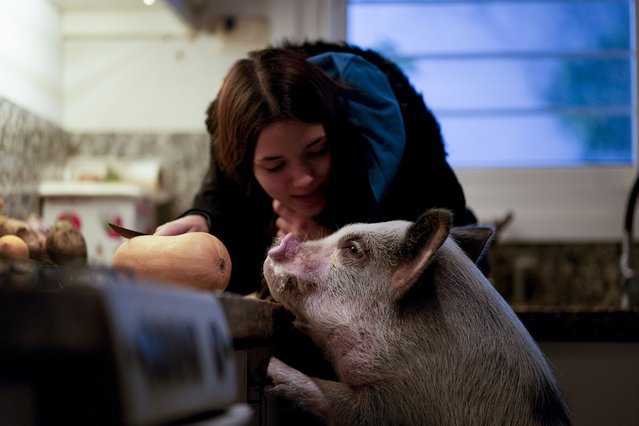 Luciana Benetti, 16, feeds her pet pig Chanchi, given to her as a birthday gift the previous year amid the COVID-19 pandemic in Buenos Aires, Argentina, Saturday, September 4, 2021. “One day my legs gave way and he came running. He grabbed my hair and raised my head”, she said. She had been taking online classes at home, unable to see friends or schoolmates. “I didn't feel well. I was dizzy because I couldn't leave”. (Photo by Natacha Pisarenko/AP Photo) 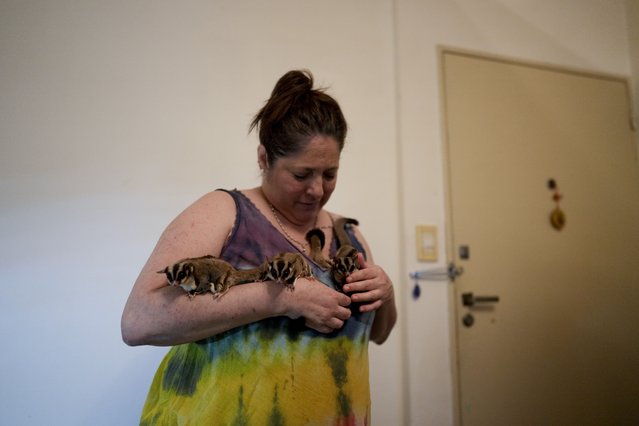 Lorena Alvarez holds some of her 28 pet “petauros”, or sugar gliders, for which she has a permit, at her home in Buenos Aires, Argentina, Wednesday, September 1, 2021. “I get up and I live for them. They are my engine of struggle and of life”, she said of the animals that scamper over her looking to be petted, or leap and glide down to the floor. (Photo by Natacha Pisarenko/AP Photo) 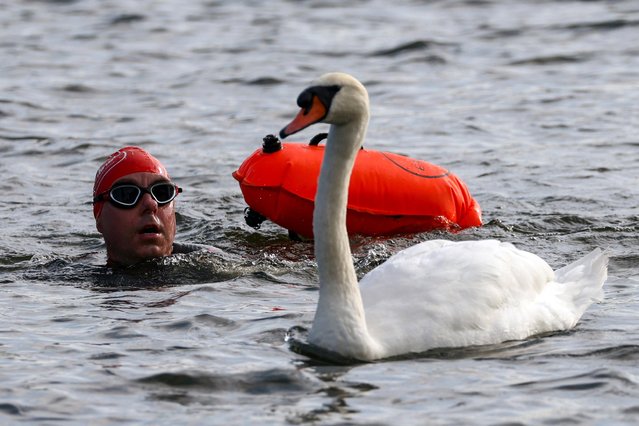 A participant swims next to a swan during “The 2021 Children with Cancer UK Swim Serpentine” in the Serpentine, London, Britain on September 18, 2021. (Photo by Tom Nicholson/Reuters) 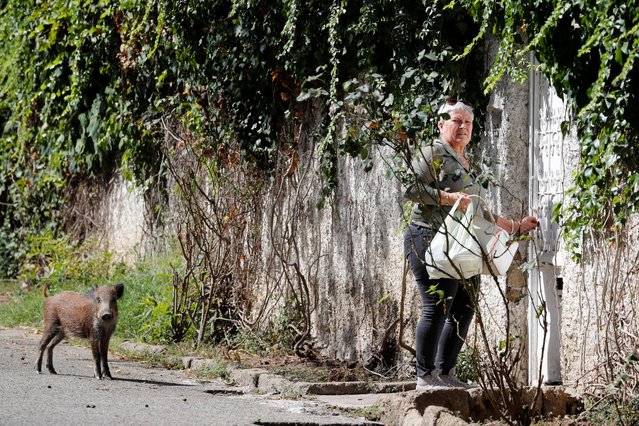 A young wild boar roams a street foraging for food in Rome, Italy on September 23, 2021. (Photo by Remo Casilli/Reuters) 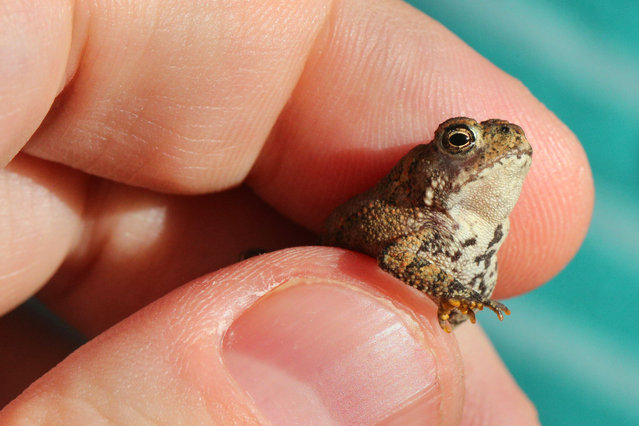 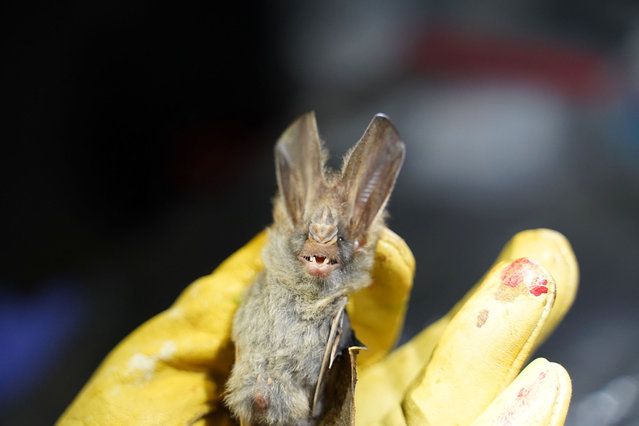 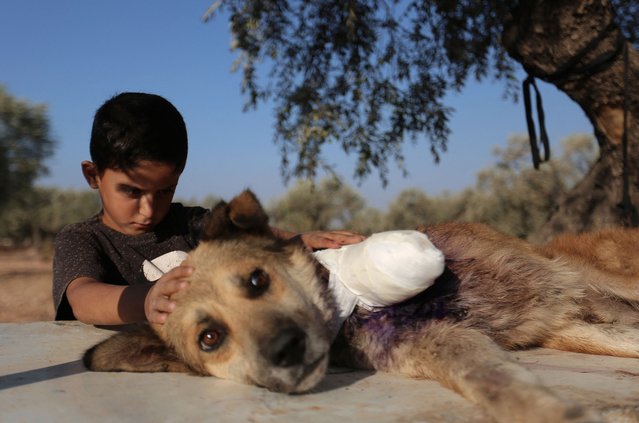 A Syrian boy stands next to a dog whose leg was treated by a veterinary after it was hit by shrapnel during a bombardment and was now amputated and cauterised, in the southern outskirts of the city of Idlib, on September 16, 2021. (Photo by Aaref Watad/AFP Photo) 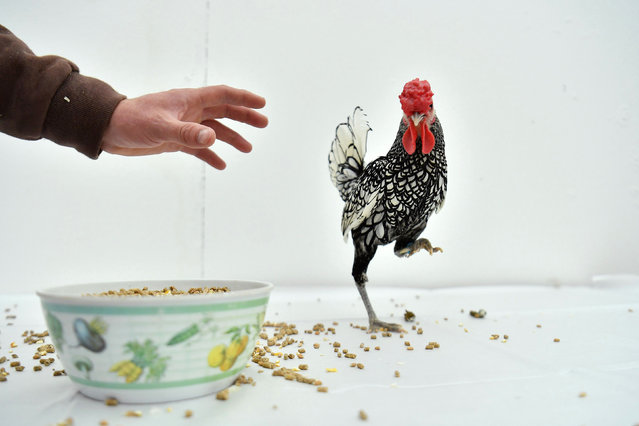 A handler attempts to help pose a Seabright silver cockerel for a portrait at the annual Balmoral Show held by the Royal Ulster Agricultural Society, which has returned after being cancelled last year due to coronavirus disease (COVID-19), in Lisburn, Northern Ireland, September 23, 2021. (Photo by Clodagh Kilcoyne/Reuters) 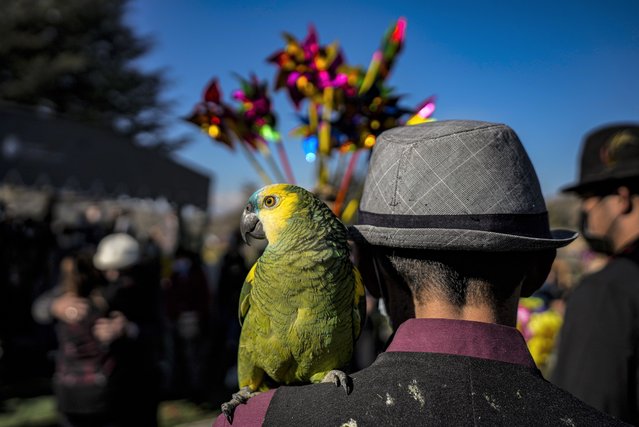 An organ grinder and his parrot named Americo attend the funeral of fellow organ grinder and Chinchinero Hector Lizana, 93, who died of COVID-19, three weeks after his son Manuel also died from COVID-19, in Santiago, Chile, Wednesday, September 15, 2021. (Photo by Esteban Felix/AP Photo) 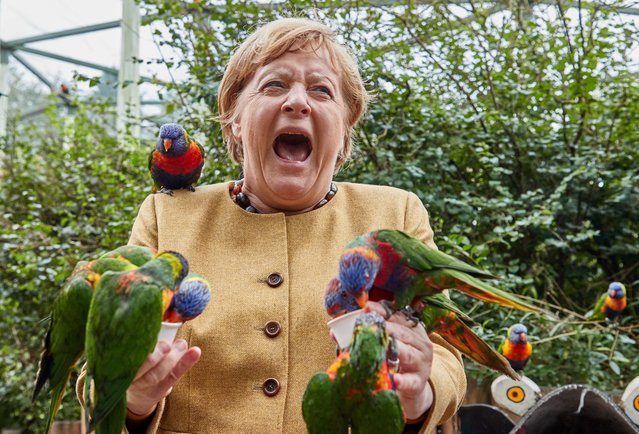 German Chancellor Angela Merkel reacts as she gets bitten while feeding Australian lorises at Marlow Bird Park in Marlow, Germany on September 23, 2021. (Photo by Georg Wendt/dpa) 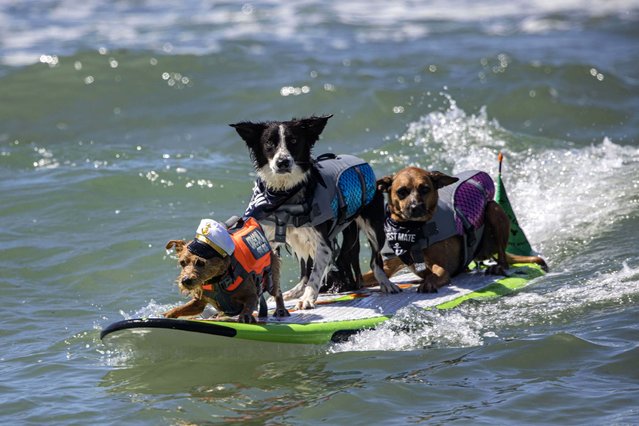