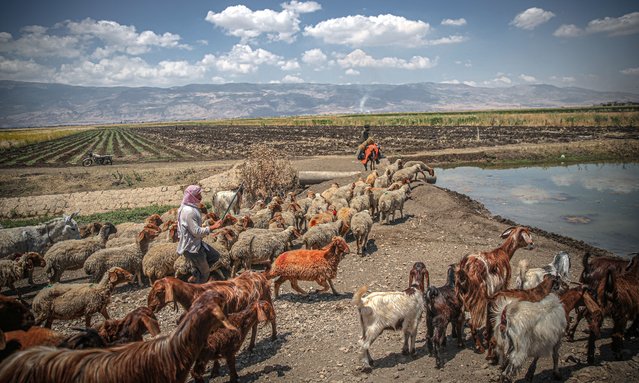 A view of planted field as farmers herd their sheep flocks in Idlib, Syria on May 30, 2021. Assad regime forces target the cultivated fields, planted by civilians in the countryside, and prevent farmers from harvesting their crops by burning them with artillery and mortar attacks using a method called “hunger bomb”. (Photo by Muhammed Said/Anadolu Agency via Getty Images) 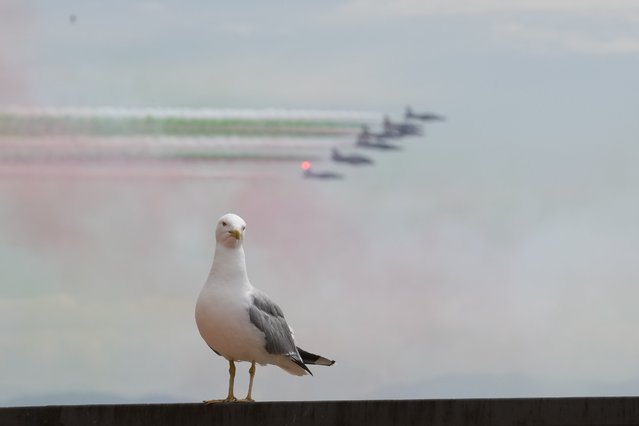 A seagull looks on as the Italian three-color special air force acrobatic team “Frecce Tricolori” flies over Rome and the Vatican Wednesday, June 2, 2021, as Italy celebrates the anniversary of its unification. (Photo by Andrew Medichini/AP Photo) 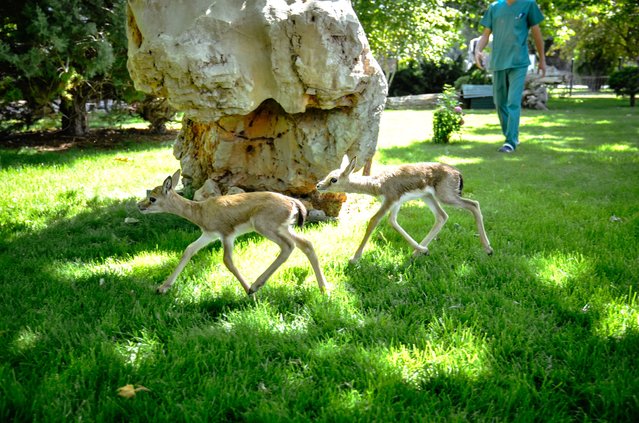 Two endangered gazelle babies seized in a car during a police search, are put under protection at the rehabilitation center of Karatay Municipality Zoo in Konya, Turkey on May 27, 2021. (Photo by Serhat Cetinkaya/Anadolu Agency via Getty Images) 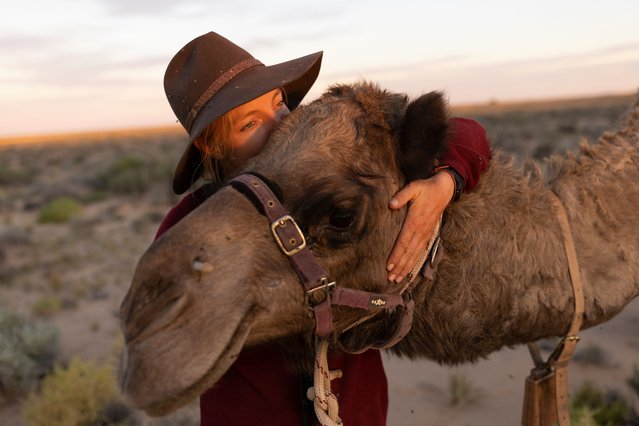 Sophie Matterson interacts with her lead camel Jude near a small clearing at Anna Creek on May 21, 2021 in Oodnadatta, Australia. Sophie Matterson, 32, is on a 5,000km journey – walking with five camels coast to coast from Australia's western-most point in Shark Bay, Western Australia, to its eastern-most point in Byron Bay, New South Wales. Sophie left her life in Brisbane working in film and television to embark on the trek in March 2020. (Photo by Brook Mitchell/Getty Images) 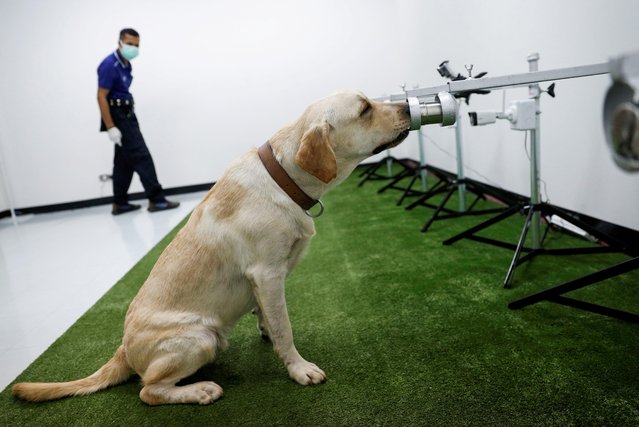 A dog that has been trained to sniff out the coronavirus disease (COVID-19), screens a sweat sample at Chulalongkorn University, in Bangkok, Thailand on May 21, 2021. (Photo by Jorge Silva/Reuters) 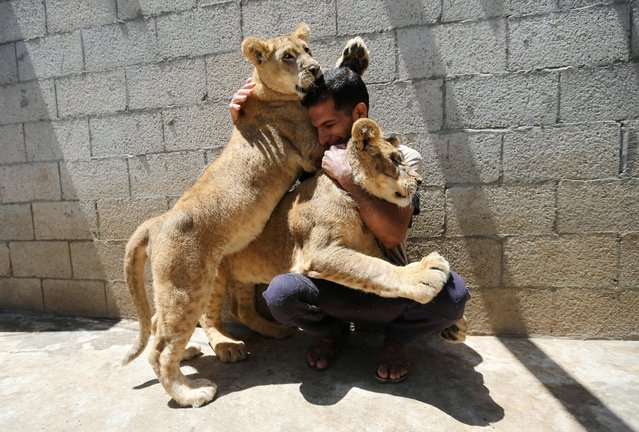 A Palestinian man plays with pet lion cubs on a house rooftop in Khan Younis, in the southern Gaza Strip on May 23, 2021. (Photo by Ibraheem Abu Mustafa/Reuters) 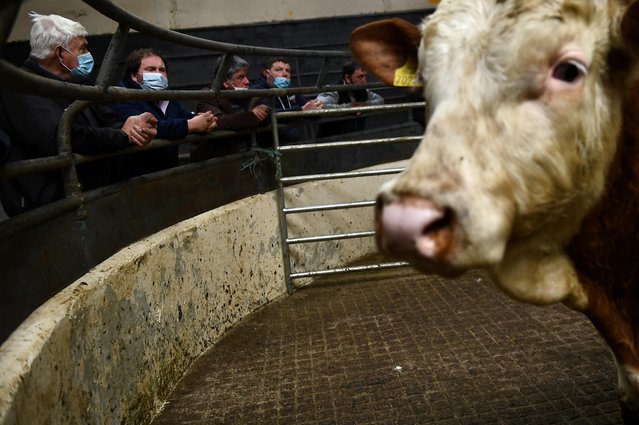 Farmers wearing a protective face masks view a cow from ringside at the Carrigallen Mart cattle auction as the coronavirus disease (COVID-19) restrictions continue to ease in Carrigallen, Ireland, May 22, 2021. (Photo by Clodagh Kilcoyne/Reuters) 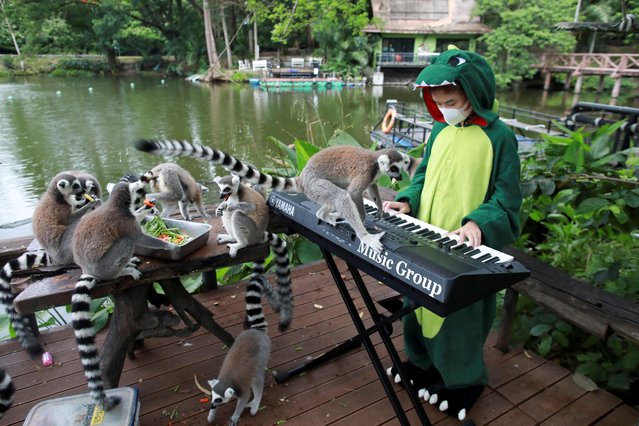 Lemurs are seen as Seenlada Supat, 11, plays keyboard for animals amid the coronavirus disease (COVID-19) outbreak, at a zoo in Chonburi, Thailand on May 26, 2021. (Photo by Soe Zeya Tun/Reuters) 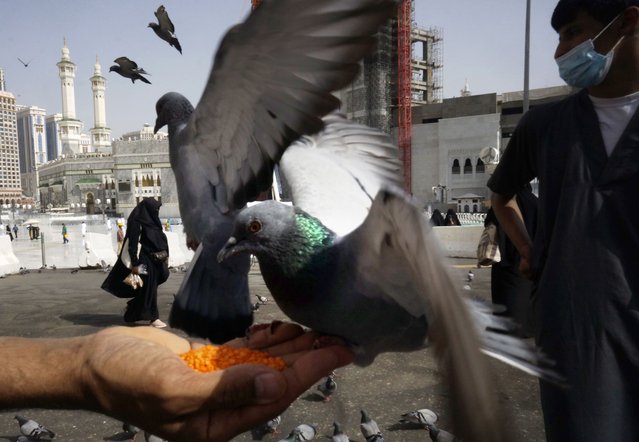 A Muslim pilgrim feeds pigeons outside the Grand Mosque during the minor pilgrimage, known as Umrah, in the Muslim holy city of Mecca, Saudi Arabia, Sunday, May 30, 2021. (Photo by Amr Nabil/AP Photo) 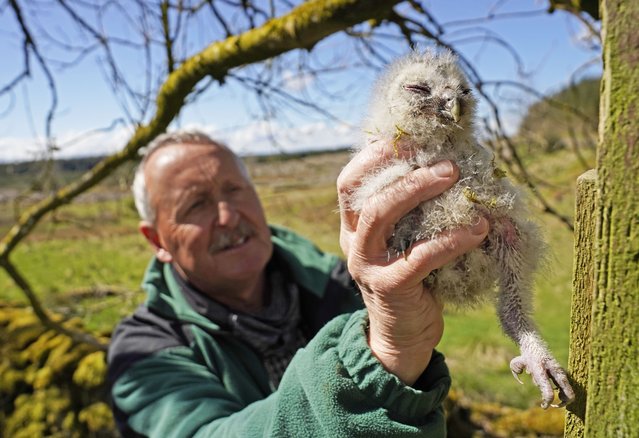 Martin Davison, ornithologist for Forestry England, rings a baby tawny owl chick in Kielder Forest, Northumberland on Wednesday, May 19, 2021, where wildlife experts are continuing to work on the UK's longest running study of the birds. (Photo by Owen Humphreys/PA Images via Getty Images) 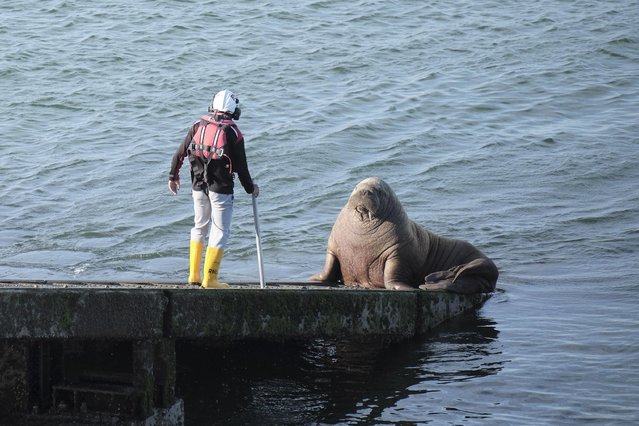 Wally the walrus received a hose-down by lifeboat volunteers attempting to shoo him off an emergency slipway on May 17, 2021 in Tenby, Wales. Lifeboat crews tried different ways to remove the 600kg Arctic walrus in the event of a rescue mission, but he refused to move, meaning that for 20 minutes the lifeboat could not be launched. (Photo by Paul Deverson/Wales News Service) 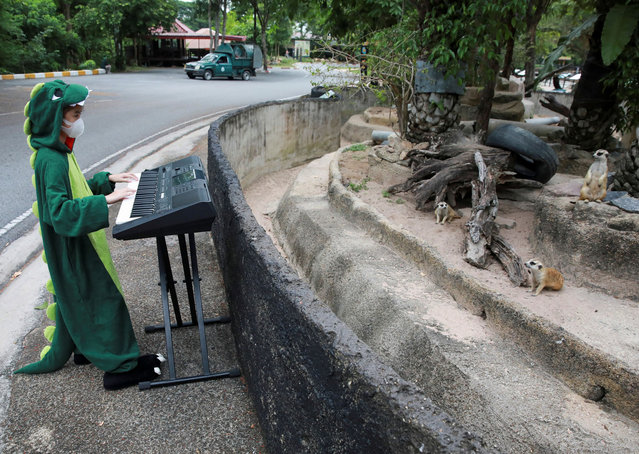 Meerkats are seen as Seenlada Supat, 11, plays keyboard for animals amid the coronavirus disease (COVID-19) outbreak, at a zoo in Chonburi, Thailand on May 26, 2021. (Photo by Soe Zeya Tun/Reuters) 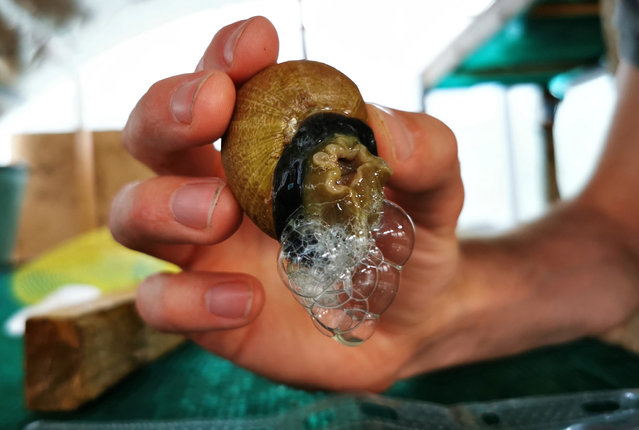 French snail grower and soap maker Damien Desrocher holds a snail as he extracts slime that he used to make soap bars in his snail enclosure in Wahagnies, near Lille, France, May 11, 2021. (Photo by Ardee Napolitano/Reuters) 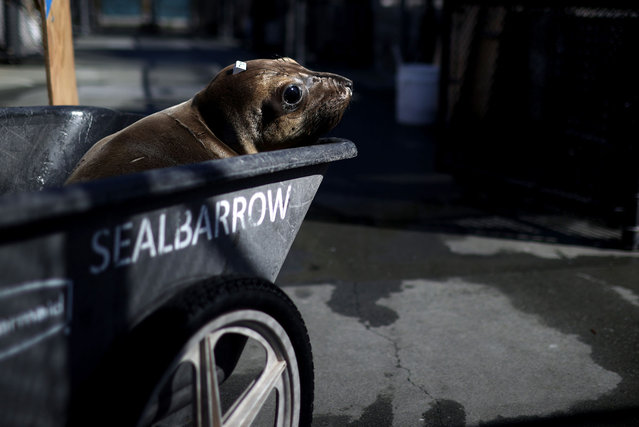 An Elephant Seal pup rides in a cart at The Marine Mammal Center on May 08, 2021 in Sausalito, California. Sea lions in California are facing a surge in cancer cases that are potentially linked to thousands of barrels of DDT that were dumped in the Pacific Ocean off the Southern California coast decades ago. A research vessel from Scripps Institution of Oceanography at University of California San Diego recently discovered and photographed over 27,000 barrels possibly containing the toxic substance DDT (dichloro-diphenyl-trichloroethane) on the seafloor between Santa Catalina Island and the Los Angeles coast. The Marine Mammal Center has found that approximately one in four California adult sea lions have died from cancer. (Photo by Justin Sullivan/Getty Images) 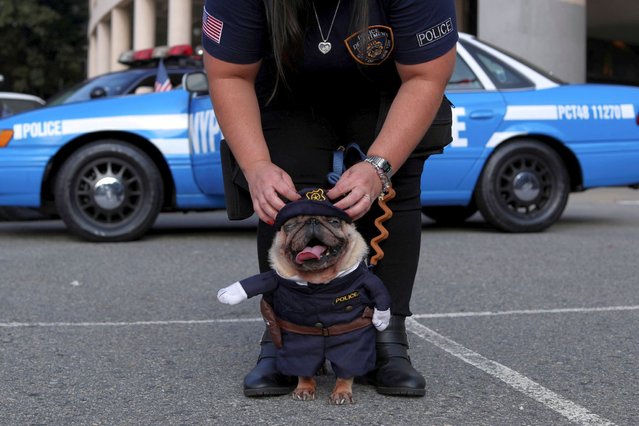 Mariani Morandi, a member of a group of Brazilian fans of New York Police Department (NYPD), whose hobby is to recreate NYPD's cars and motorbikes, adjusts her dog's police costume in front of Pacaembu Stadium in Sao Paulo, Brazil on May 16, 2021. (Photo by Amanda Perobelli/Reuters) 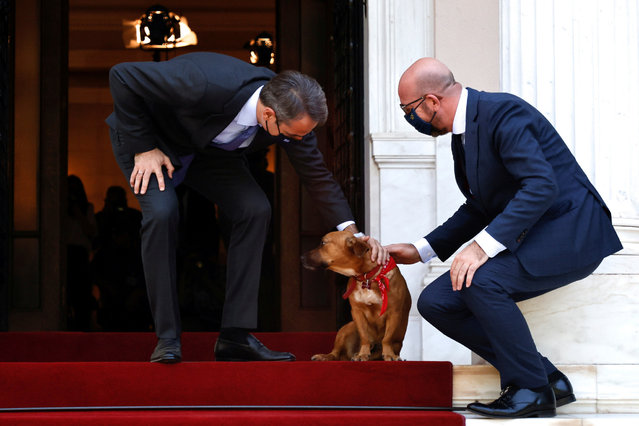 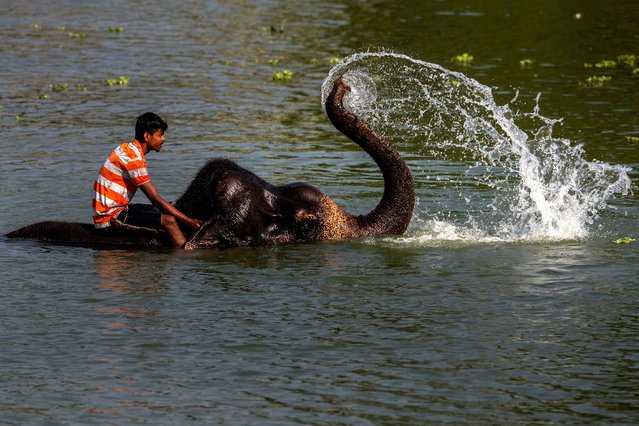 An Indian mahout bathes an elephant in a pond on the outskirts of Gauhati, India, Friday, May 28, 2021. (Photo by Anupam Nath/AP Photo) 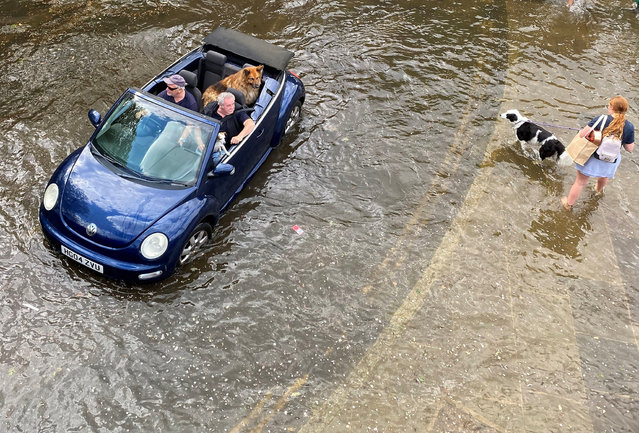 A car with dogs onboard is driven through floodwater as the River Thames bursts its banks at high tide, Richmond, London, Britain on May 27, 2021. (Photo by Toby Melville/Reuters) 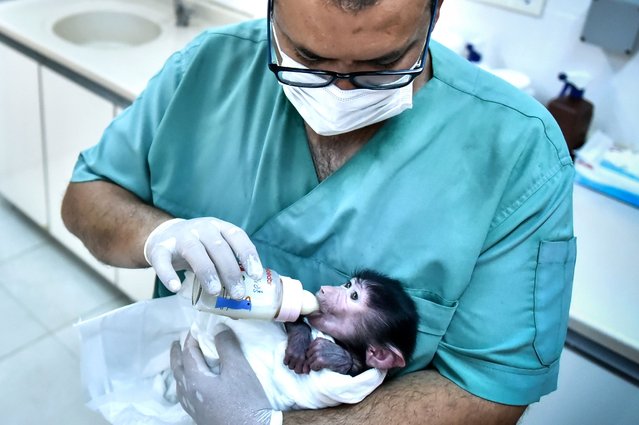 Baby baboon named “Nisan”, who was born last month and taken under protection as it was not wanted by its mother, is seen as it is fed by a veterinary at Tarsus Nature Park in Mersin, Turkey on May 30, 2021. A special living space has been created for the baboon and it is fed with bottle. (Photo by Serkan Avci/Anadolu Agency via Getty Images)
Edit Del
06 Jun 2021 07:47:00, post received 0 comments
Publication archive:
←   →
Popular tags:
All tags
Last searches: