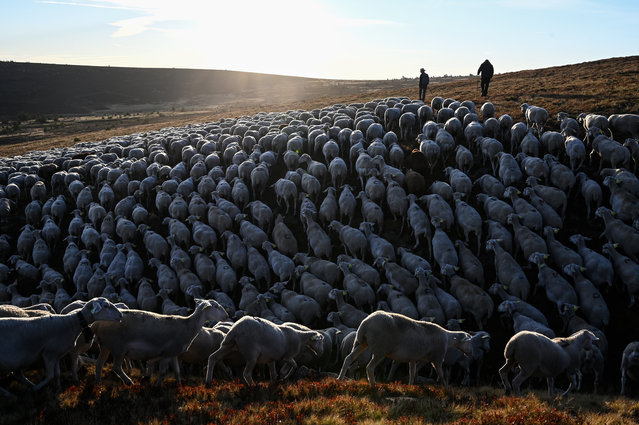 Shepherds stand on a hill with sheep on August 27, 2020 in Prevencheres, southern France, as shepherds and sheep breeders of the pastoral group of Finiels descend one of the largest herds of the Massif Central (2,500 ewes) to Prevencheres after two months of summer pasture on Mont Lozere. (Photo by Pascal Guyot/AFP Photo) 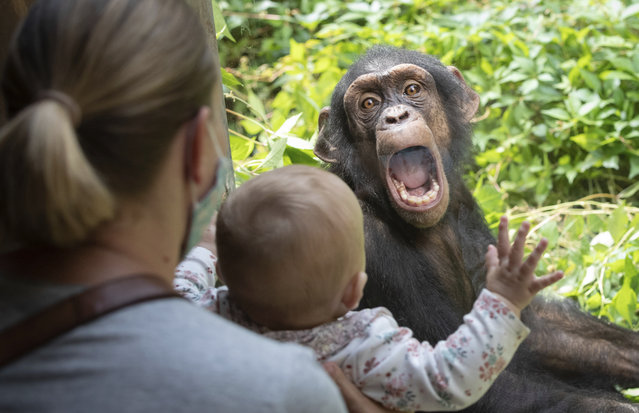 A chimpanzee in the Osnabrück Zoo in Lower Saxony makes contact with a small zoo visitor sitting in front of a pane on September 1, 2020. The two males Lobo and Lome moved from Leipzig Zoo to Osnabrück Zoo to strengthen the social structure of the existing group. (Photo by Friso Gentsch/dpa) 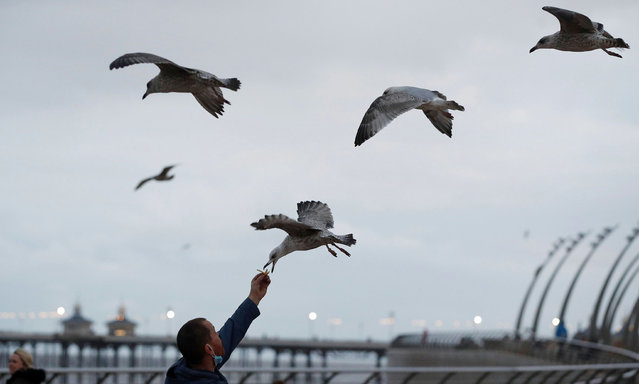 A man feeds chips to gulls as they fly over the promenade in Blackpool, Britain, September 5, 2020. (Photo by Phil Noble/Reuters) 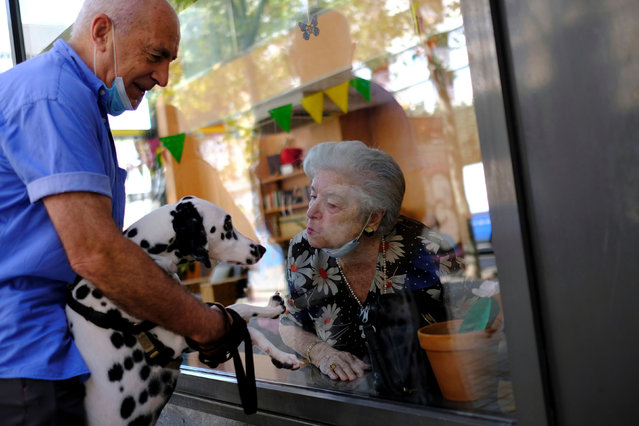 Maria de Concepcion Illa, 89, who lives in a care home, blows a kiss to Menta, the dog of her neighbour Antoni (L), 70, as they talk through a glass front at the Centre Parc nursing home after Catalonia's regional authorities announced restrictions to contain the spread of the coronavirus disease (COVID-19), in Barcelona, Spain on August 27, 2020. (Photo by Nacho Doce/Reuters) 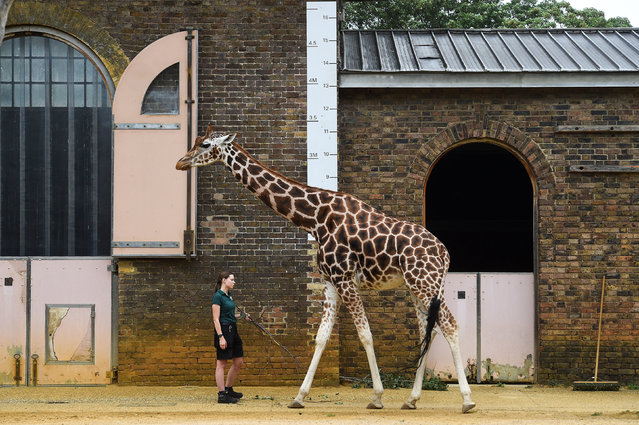 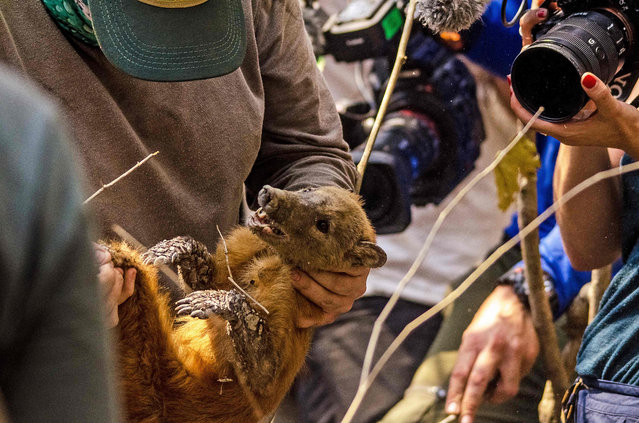 A raccoon is rescued from a burning area of wetlands by a group of biologists in the Pantanal wetlands, Mato Grosso state, Brazil on August 26, 2020. The Pantanal, a huge tropical wetland spread over Brazil’s border with Bolivia and Paraguay, is currently suffering its worst fires in more than 20 years, with nearly 12% of its vegetation reportedly already lost along with many deaths of animals caught in the fire and smoke. (Photo by Joao Paulo Guimaraes/AFP Photo) 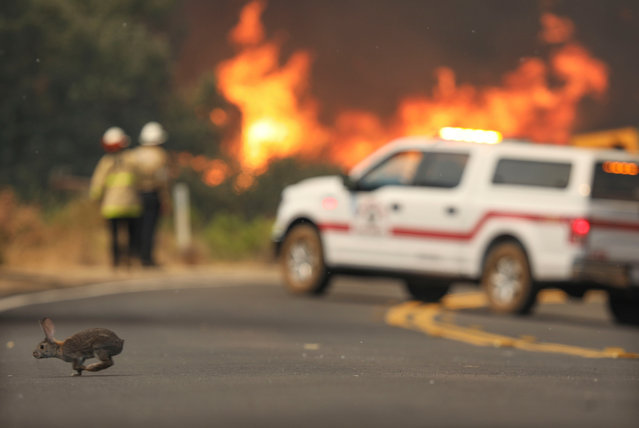 A rabbit crosses the road with flames from a brush fire along Japatul Road during the Valley Fire in Jamul, California on September 6, 2020. The Valley Fire in the Japatul Valley burned 4,000 acres overnight with no containment and 10 structures destroyed, Cal Fire San Diego said. (Photo by Sandy Huffaker/AFP Photo) 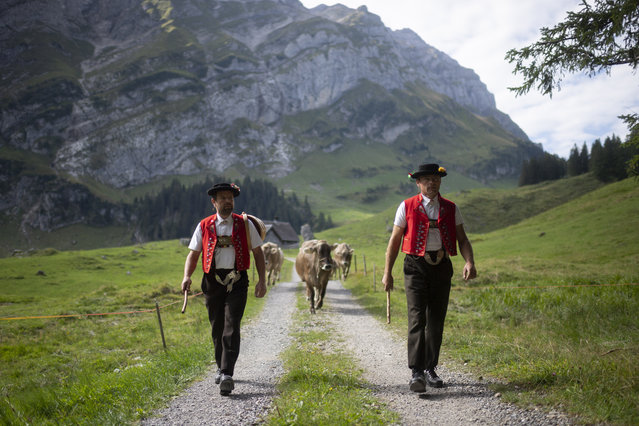 Alpine dairymen on the downhill run of the Faessler family from the Dunkelberndli Alp in Schwende, Switzerland, Saturday, September 5, 2020. The Faessler family spent the summer from May to September on the alp and is now returning to the valley with 16 cows, 18 head of cattle and 8 calves. (Photo by Gian Ehrenzeller/Keystone via AP Photo) 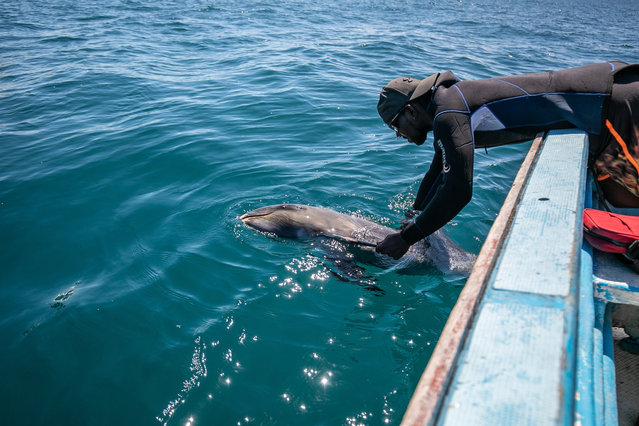 A fisherman picks up a dead dolphin from the Indian Ocean off Grand Sable, Mauritius, 28 August 2020. Its estimated 39 dolphins and whales have washed up dead on the beaches of Mauritius in the past three days. According to Greenpeace Africa the carcasses have been taken for post mortem analysis to establish cause of death and if there is a connection with the oil spill from the MV Wakashio, a Japanese owned Panama-flagged bulk carrier after it ran aground off the southeast coast of Mauritius spilling more than 1000 tons of fuel. (Photo by Laura Morosoli/EPA/EFE) 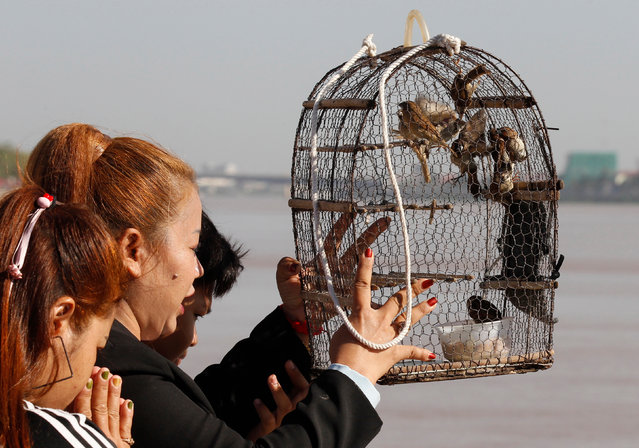 Cambodian woman releases birds at a park in front of the Royal Palace in Phnom Penh, Cambodia, 26 August 2020. According to local? media reports, the number of foreign tourists visiting Cambodia has dropped sharply due to the COVID-19 pandemic. Tourism is a main sector supporting Cambodia's economy. (Photo by Mak Remissa/EPA/EFE) 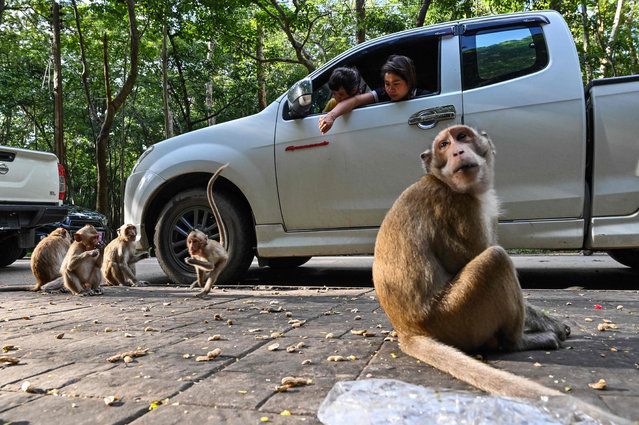 In this photo taken September 5, 2020, visitors feed monkeys at the Buddhist cave temple on Khao Chakan mountain in the eastern Thai province of Sa Kaeo. (Photo by Romeo Gacad/AFP Photo) 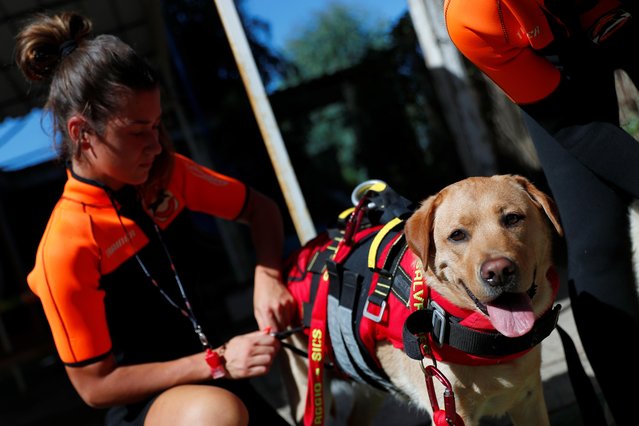 A member of an all-female group of canine rescuers from the Italian School of Rescue Dogs (La Scuola Italiana Cani Salvataggio) gets ready to attend a training session with her dog before patrolling the beach to ensure swimmers can enjoy their time at the sea in safety, in Riva dei Tarquini, near Rome, Italy, August 25, 2020. (Photo by Guglielmo Mangiapane/Reuters) 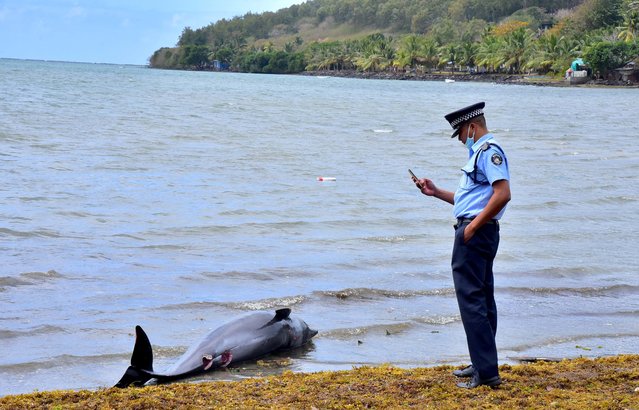 A policeman takes a photograph of a carcass of a dolphin that died and was washed up on shore near the site of an oil spill caused by a Japanese ship that struck a coral reef, at the Grand Sable, Mauritius, August 26, 2020. The full impact of the spill is still unfolding, but scientists have warned to brace for a major ecological disaster in the area, which could impact Mauritius and its tourism-dependent economy for decades. (Photo by Beekash Roopun/L'Express Maurice via Reuters) 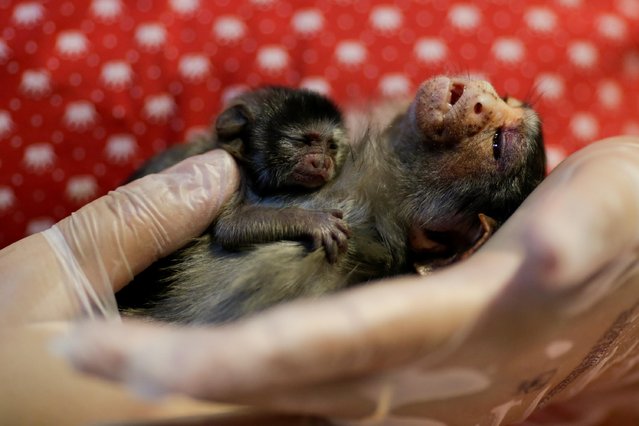 Veterinarian Carine Hanna takes care of Xita, a Rondon's marmoset, who was rescued by the state environmental police after giving birth, at the Clinidog veterinary clinic, in Porto Velho, Rondonia State, Brazil, August 24, 2020. Vets at the clinic believe the mother and baby were run over by a car as they fled the fires raging across the Amazon. “She arrived stressed, screaming and smeared with blood”, said Carlos Henrique Tiburcio, the owner of the clinic. The team diagnosed Xita with a traumatic brain injury. She is wrapped and fed, and her condition slowly improves. But her baby doesn't make it. (Photo by Ueslei Marcelino/Reuters) 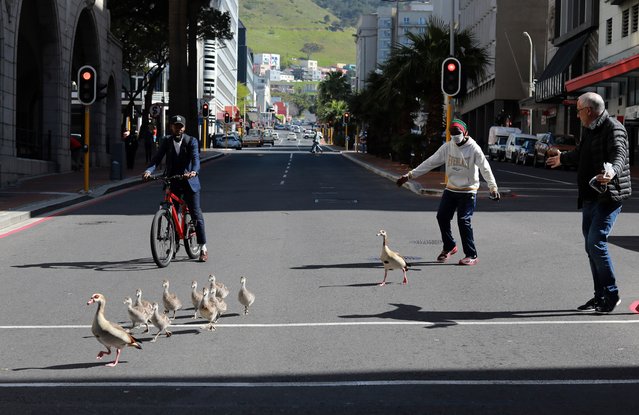 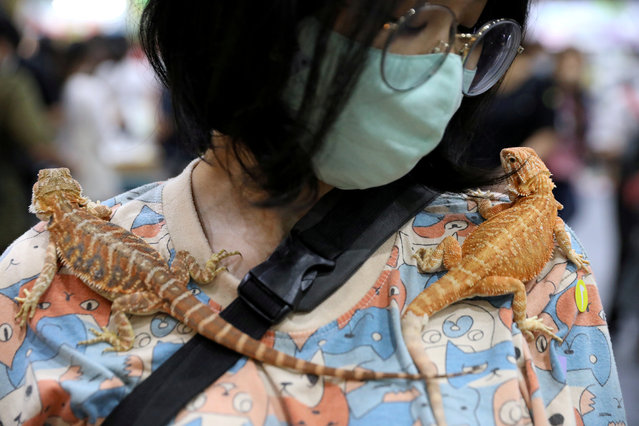 A woman carries two geckos on her shoulders at the Pet Expo Thailand in Bangkok, Thailand, September 6, 2020. (Photo by Soe Zeya Tun/Reuters) 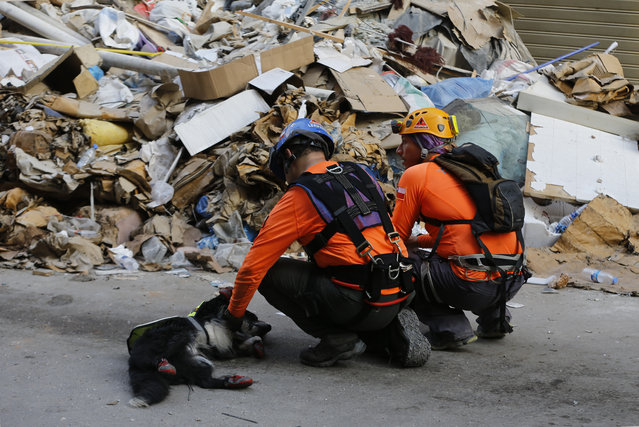 Chilean rescuers pat their rescue dog, after searching in the rubble of a building that was collapsed in last month's massive explosion, after getting signals there may be a survivor under the rubble, in Beirut, Lebanon, Thursday, September 3, 2020. Hopes were raised after the dog of a Chilean search and rescue team touring Gemmayzeh street, one of the hardest-hit in Beirut, ran toward the collapsed building. (Photo by Bilal Hussein/AP Photo) 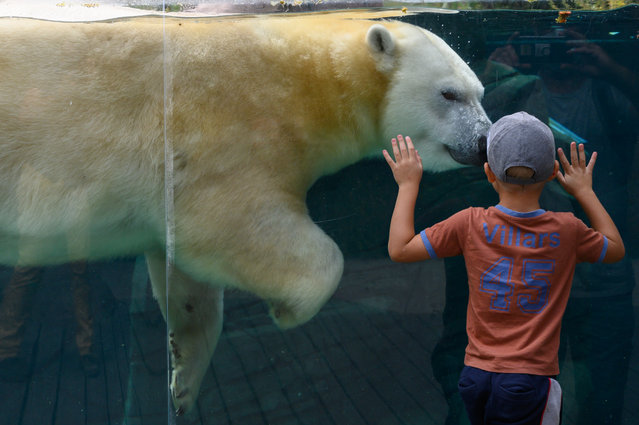