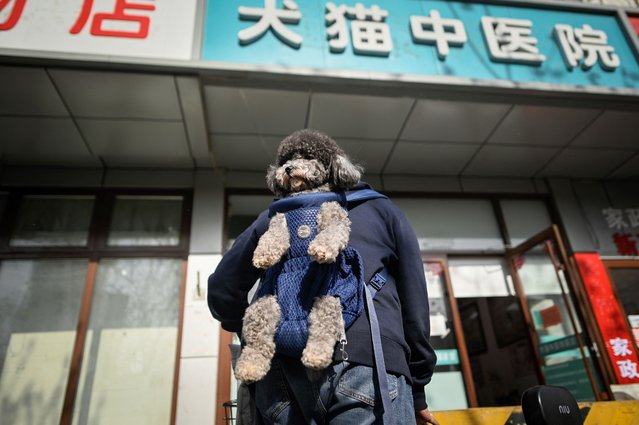 This picture taken on April 12, 2022 shows a man carrying his dog leaving after receiving acupuncture and infrared therapy at an animal clinic in Beijing. A growing number of animals are being signed up for traditional medicine in China – care their masters say is less invasive and comes with fewer side effects than conventional treatments. (Photo by Wang Zhao/AFP Photo) 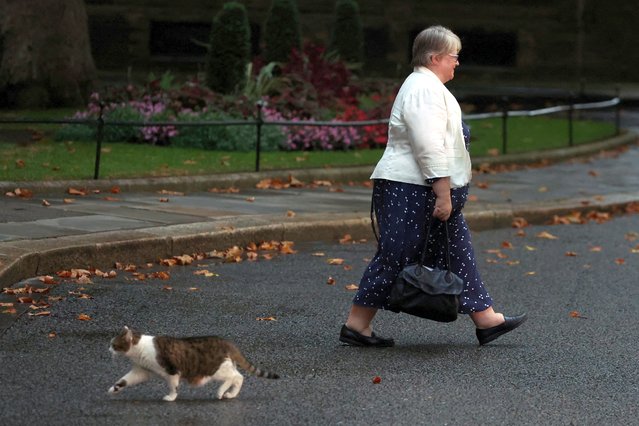 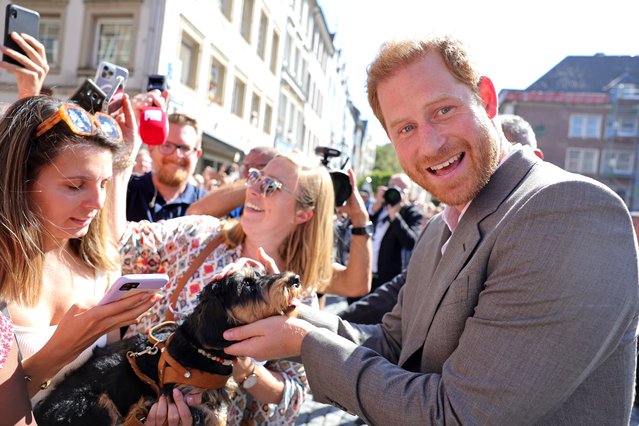 Prince Harry, Duke of Sussex is greeted by well-wishers and pets a dog outside the town hall during the Invictus Games Dusseldorf 2023 – One Year To Go events, on September 06, 2022 in Dusseldorf, Germany. The Invictus Games is an international multi-sport event first held in 2014, for wounded, injured and sick servicemen and women, both serving and veterans. The Games were founded by Prince Harry, Duke of Sussex who's inspiration came from his visit to the Warrior Games in the United States, where he witnessed the ability of sport to help both psychologically and physically. (Photo by Chris Jackson/Getty Images for Invictus Games Dusseldorf 2023) 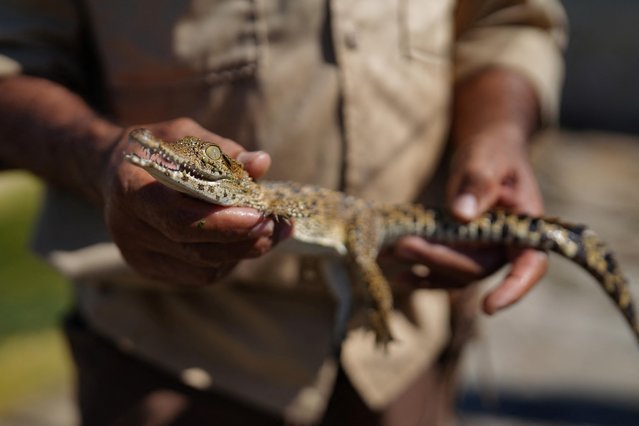 A worker holds a Cuban crocodile (Crocodylus rhombifer) at a hatchery at Zapata Swamp, Cienaga de Zapata, Cuba, August 24, 2022. Cuban crocodiles, an endemic species found only here and in a swamp on Cuba's Isle of Youth, are critically endangered and have the smallest natural habitat left of any living crocodile species, scientists say. (Photo by Alexandre Meneghini/Reuters) 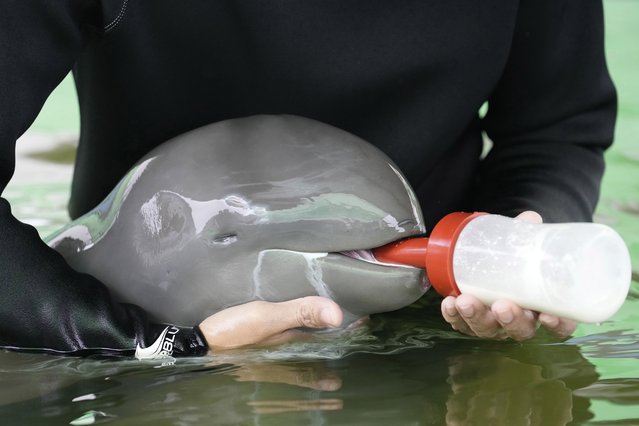 Volunteer Tosapol Prayoonsuk feeds a baby dolphin nicknamed Paradon with milk at the Marine and Coastal Resources Research and Development Center in Rayong province in eastern Thailand, Friday, August 26, 2022. The Irrawaddy dolphin calf was drowning in a tidal pool on Thailand’s shore when fishermen found him last month. The calf was nicknamed Paradon, roughly translated as “brotherly burden”, because those involved knew from day one that saving his life would be no easy task. But the baby seems to be on the road to recovery. (Photo by Sakchai Lalit/AP Photo) 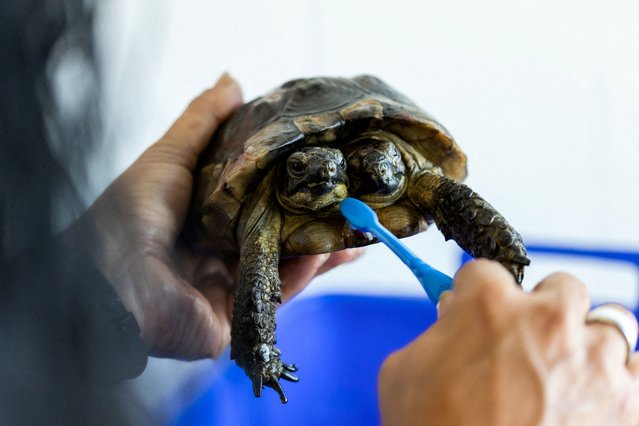 Janus, a two-headed Greek tortoise named after the Roman god with two heads, is washed with a toothbrush one day ahead of his 25th birthday at the Natural History Museum in Geneva, Switzerland on September 2, 2022. (Photo by Pierre Albouy/Reuters) 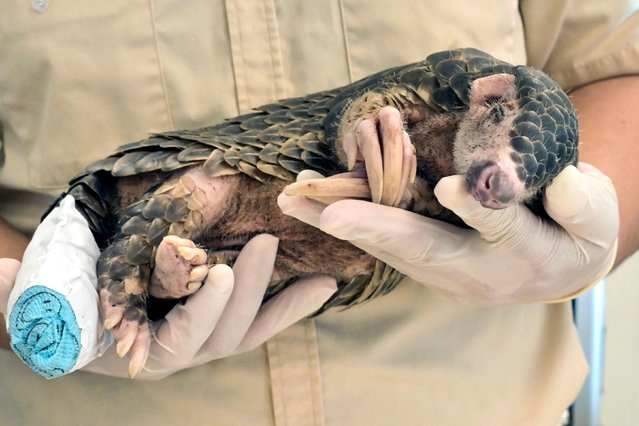 A young pangolin is carried after receiving medical treatment on its tail, believed to have been injured during an attack by dogs, at the Leofoo Village Zoo in Hsinchu, northern Taiwan on August 31, 2022. (Photo by Sam Yeh/AFP Photo) 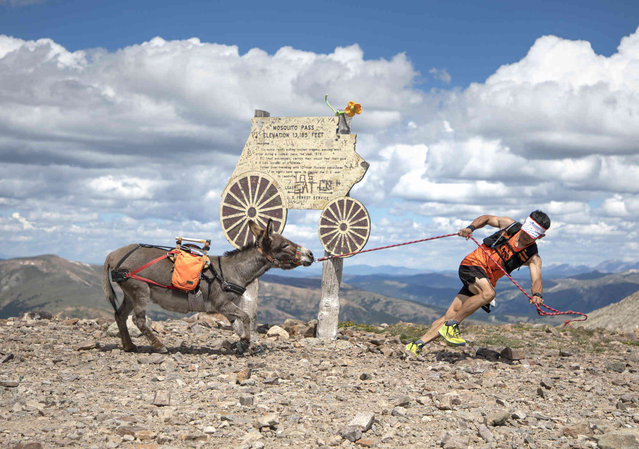 Racer Marvin Sandoval of Leadville, Colo., struggles with his burro, Buttercup, as they pass the sign on the top of Mosquito Pass as the pair follow the route of the Leadville Burro Race Sunday, August 7, 2022, near Leadville, Colo. (Photo byHugh Carey/The Colorado Sun via AP Photo) 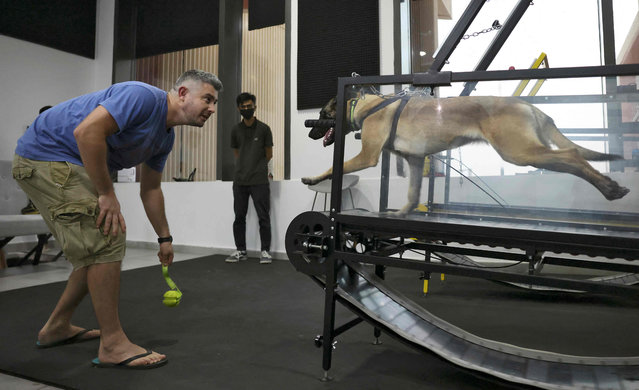 A dog runs on a treadmill at the “Posh Pets” boutique and spa in Abu Dhabi on August 16, 2022. As the Gulf's increasingly fierce temperatures becomes dangerous to health amid fears over the pace of climate change, those who can afford not to work outside in the blazing sun stay inside in air-conditioning. And for owners of pampered pets able to splash the cash, an air-conditioned gym for dogs has become an attractive option. (Photo by Karim Sahib/AFP Photo) 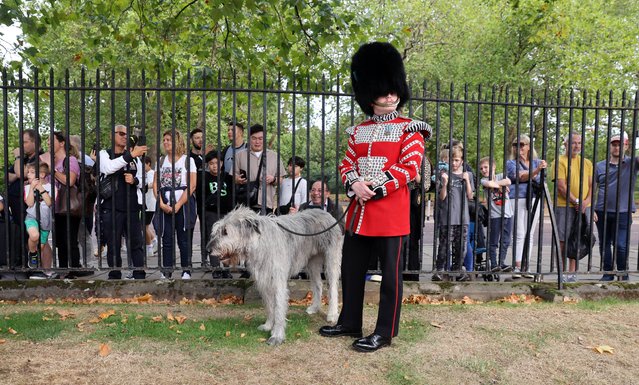 Tourists look through the railings of Wellington barracks on September 2, 2022 to see the mascot of the Irish Guards ,wolfhound “Turlogh Mor”, as two new Irish guards Public Duties Companies are forming up on the parade square to take part in their first guard duty at Buckingham Palace. (Photo by Richard Pohle/The Times) 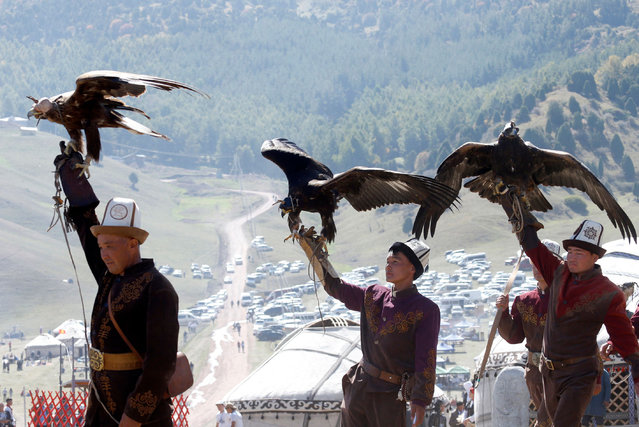 Falcons are seen during the celebration for the 31st anniversary of the independence of Kyrgyzstan in outskirts of Bishkek, Kyrgyzstan, August 31, 2022. (Photo by Xinhua News Agency/Rex Features/Shutterstock) 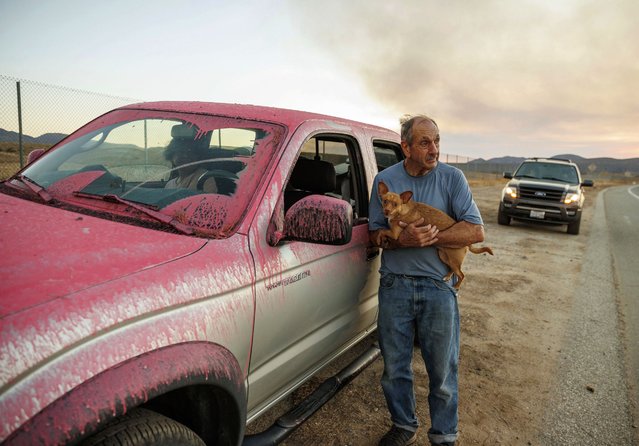 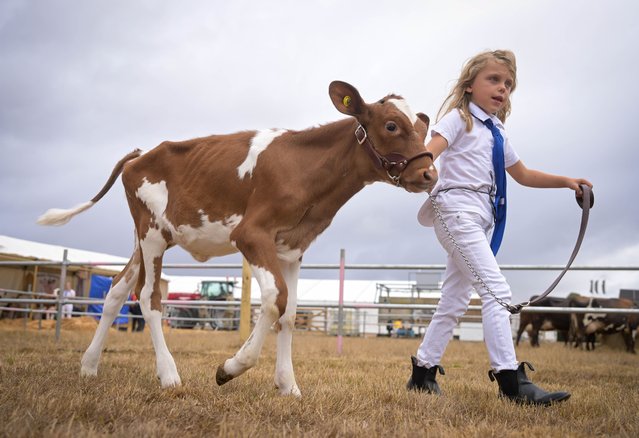 Zara Norman and her young Guernsey cow are judged in the Young Handlers competition at the Dorset County Show, on September 04, 2022 in Dorchester, England. The Dorset County Show's programme of events and attractions showcases excellence in local agriculture and rural life, including artisans, farmers and local producers. Organised by the Dorchester Agricultural Society (DAS) the show has been running for more than 180 years and attracts around 60,000 visitors. (Photo by Finnbarr Webster/Getty Images) 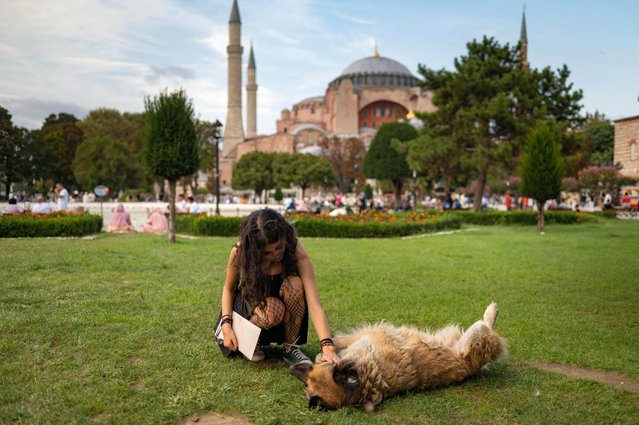 A woman strokes a stray dog in front of Hagia Sophia mosque in Istanbul, on August 23, 2022. As indelible to Istanbul as its mosques, street dogs have been swept up in a political storm involving President Recep Tayyip Erdogan and an app that helped get them killed. The sheer number of stray animals – dogs and cats both – darting between people and lounging on public squares jumps out at most visitors to Turkey's ancient cultural capital. (Photo by Yasin Akgul/AFP Photo) 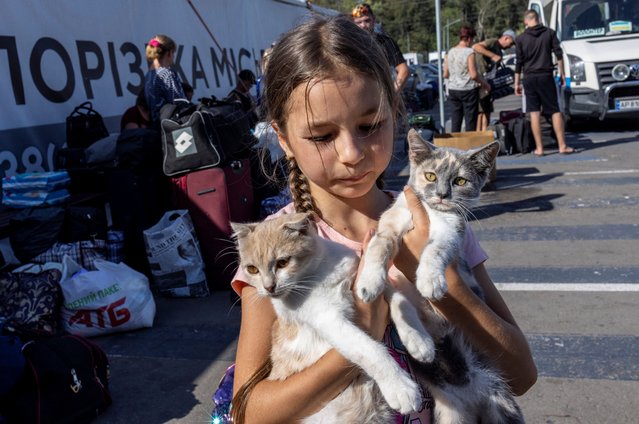 9-year Anastasija Maksimova holds her cats as she waits with her family at the relief centre, where volunteers provide food and transportation for those who are not travelling on their own, to be transferred to other parts of the country, amid Russia's invasion of Ukraine, in Zaporizhzhia, Ukraine on August 29, 2022. (Photo by Umit Bektas/Reuters) 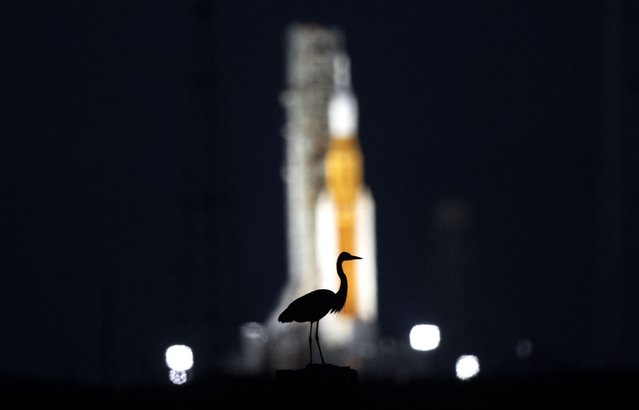 A Florida Marsh Bird sits atop a piling as the Artemis I Orion capsule sits atop the Space Launch System (SLS) rocket on Launch Pad 39B as they prepare for their mission to circle the moon on August 27, 2022. (Photo by Jonathan Newton/The Washington Post) 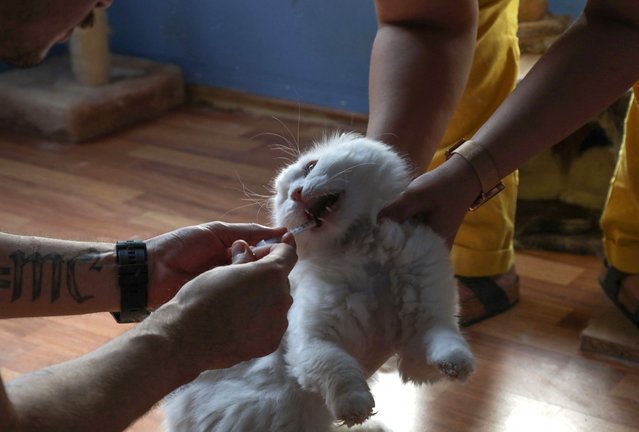 Amal Amro, the Palestinian-Syrian owner, and an employee give a cat medicine at 'Amal Pets Hotel' in Arbil, the capital of Iraq's northern Kurdish autonomous region, on August 24, 2022. (Photo by Safin Hamed/AFP Photo) 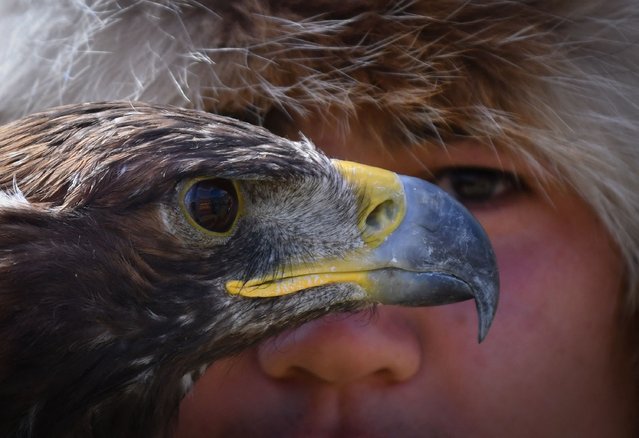 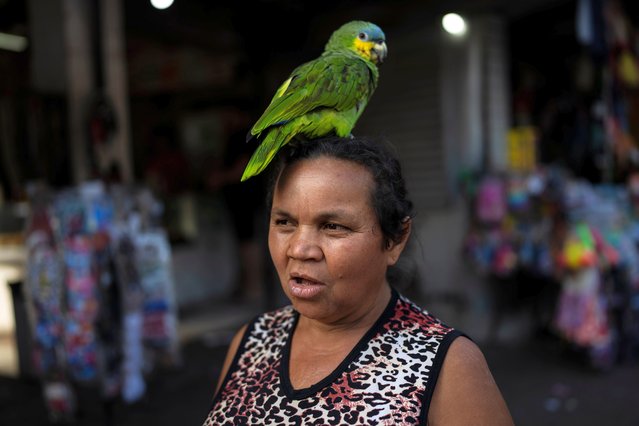 Teresa Dominguez, 58, walks towards her stand carrying her parrot Nonino on her head, in the Rocihna neighborhood of Rio de Janeiro, Brazil, Tuesday, September 6, 2022. “I am going to vote for Lula in the Oct. 2 elections, I hope life gets better with him, when he was president we could buy everything, food, televisions, and now everything is very expensive”, said Dominguez when asked for whom she would vote for in upcoming elections. (Photo by Rodrigo Abd/AP Photo)
Edit Del
11 Sep 2022 04:32:00, post received 0 comments
Publication archive:
←   →
Popular tags:
All tags
Last searches: