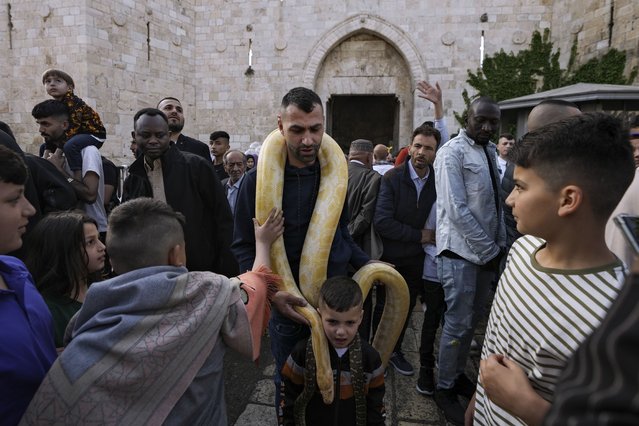 A Palestinian man carries a snake during Eid al-Fitr celebrations in the Old City of Jerusalem, Monday, May 2, 2022. Eid al-Fitr, festival of breaking of the fast, marks the end of the holy month of Ramadan. (Photo by Mahmoud Illean/AP Photo) 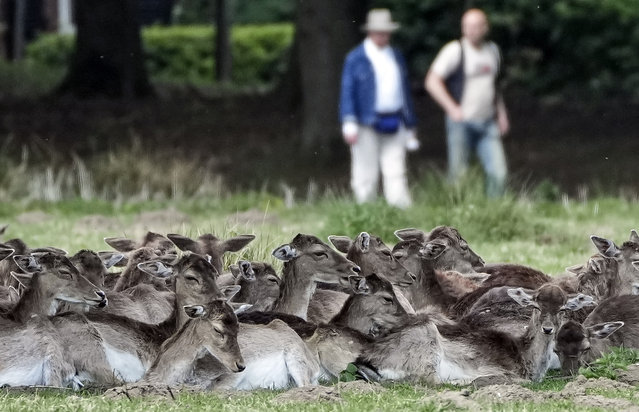 Deer rest under a tree on a sunny day at a park in Duelmen, Germany, Tuesday, May 3, 2022. (Photo by Martin Meissner/AP Photo) 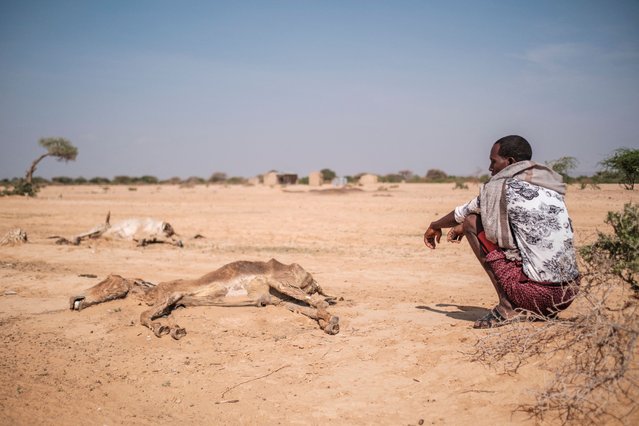 A man sits next to dead cattle in the village of Hargududo, 80 kilometers from the city of Gode, Ethiopia, on April 07, 2022. There has hardly been a drop of rain in Hargududo in 18 months. Dried-up carcasses of goats, cows and donkeys litter the ground near the modest thatched huts in this small village in the Somali region of southeastern Ethiopia. The worst drought to hit the Horn of Africa for 40 years is pushing 20 million people towards starvation, according to the UN, destroying an age-old way of life and leaving many children suffering from severe malnutrition as it rips families apart. (Photo by Eduardo Soteras/AFP Photo) 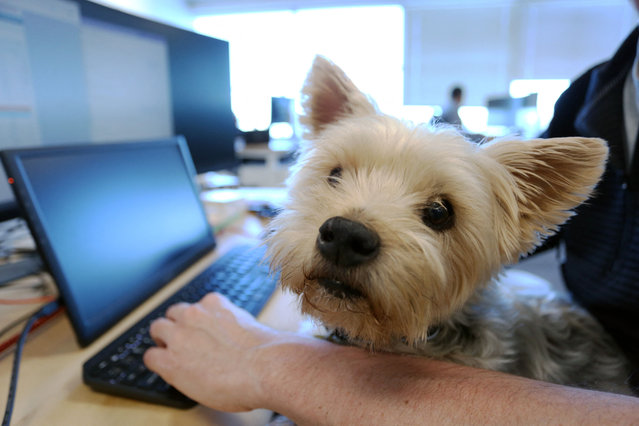 Samson, a Yorkshire Terrier sits on the lap of Trevor Watt, project controls manager at the office of Chandos Bird joint venture May 4, 2022 in Ottawa, Canada. According to a recent Leger survey for PetSafe, 51 percent of Canadians support bringing dogs to the office Younger workers were the most supportive, with 18 percent of those aged 18 to 24 years saying they would change jobs if their employer refused to allow them to bring their pet to work With an estimated 200,000 Canadians adopting a dog or cat since the start of the pandemic in 2020, bringing the nationwide total to 3.25 million, it could force employers now pressing staff to return to the office to consider this option. (Photo by Dave Chan/AFP Photo) 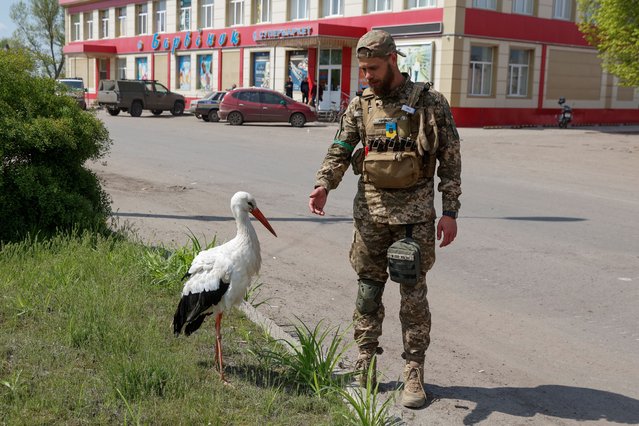 Ukrainian serviceman tries to pet a stork, as Russia's attack on Ukraine continues, in the town of Barvinkove, Kharkiv region, Ukraine on May 1, 2022. (Photo by Serhii Nuzhnenko/Reuters) 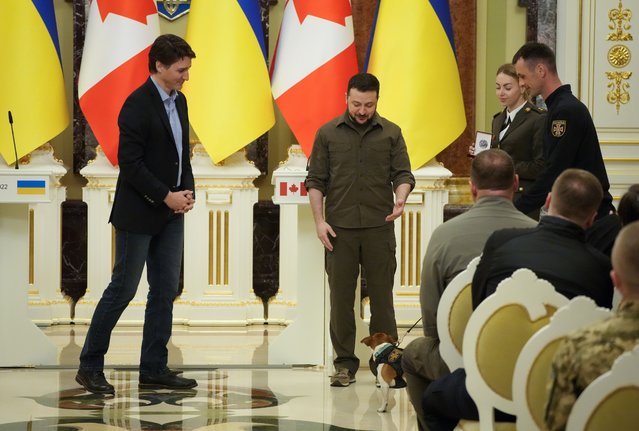 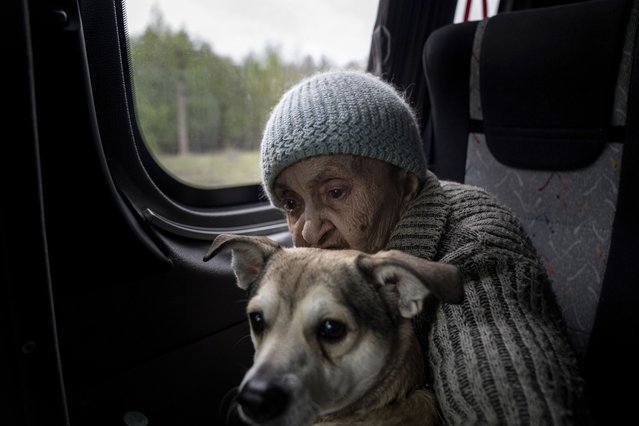 An elderly woman sits on a bus with her dog during evacuation from Lyman, Donetsk region, eastern Ukraine, Saturday, April 30, 2022. (Photo by Evgeniy Maloletka/AP Photo) 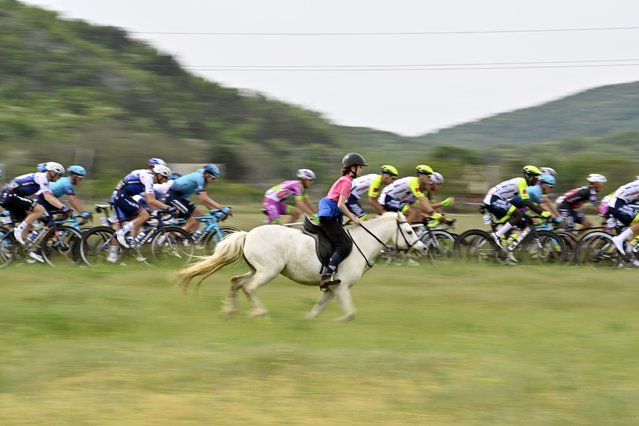 A rider manages to keep pace with the pack of cyclists competing in the Giro d’Italia on May 6, 2022, which began yesterday in Budapest. There are 20 stages in the cycling race and it will end in Verona. (Photo by Fabio Ferrari/AP Photo) 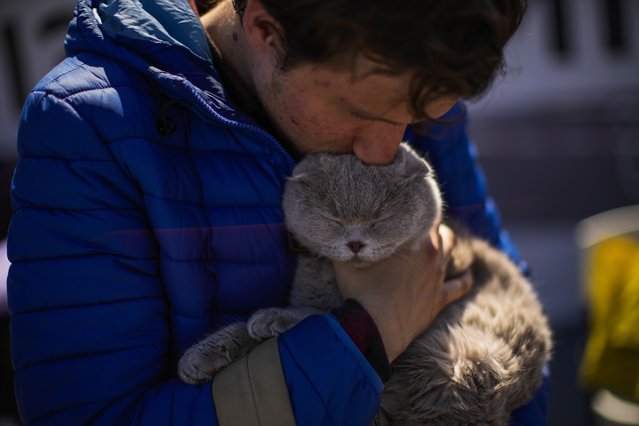 Ivan Andreiev who fled from Mariupol with his family kisses his cat Leonardo upon his arrival to a reception center for displaced people in Zaporizhzhia, Ukraine, Sunday, May 8, 2022. Thousands of Ukrainian continue to leave Russian occupied areas. (Photo by Francisco Seco/AP Photo) 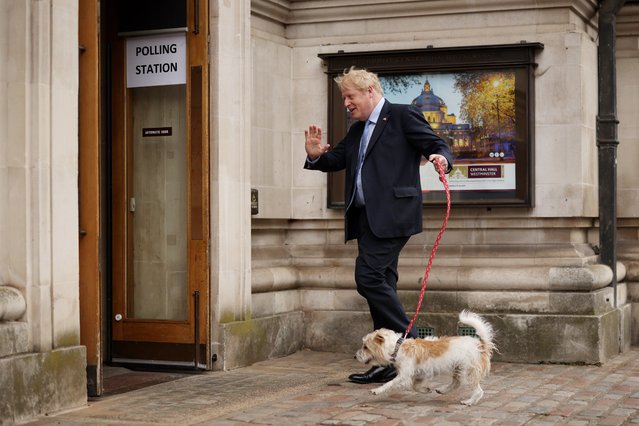 British Prime Minister and Conservative Party Leader Boris Johnson arrives to cast his vote at a polling station on May 5, 2022 in London, United Kingdom. Voters go to the polls in the local elections today to decide seats on 146 unitary, metropolitan, district and London councils in England, 32 councils in Scotland, 22 councils in Wales and for seven directly elected mayors in England. (Photo by Dan Kitwood/Getty Images) 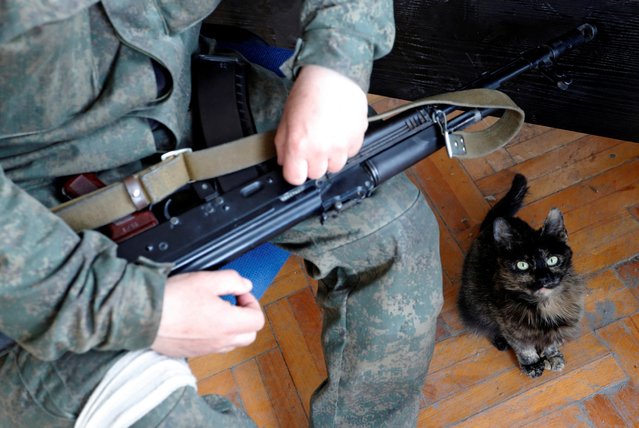 A cat sits next to a service member of pro-Russian troops at a fighting position near the Azovstal steel plant during Ukraine-Russia conflict in the southern port city of Mariupol, Ukraine on May 5, 2022. (Photo by Alexander Ermochenko/Reuters) 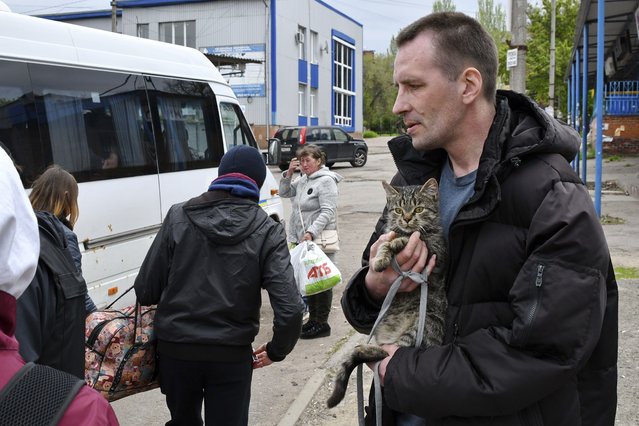 A man holds a cat as people board transport during an evacuation of civilians in Kramatorsk, Ukraine, Saturday, April 30, 2022. (Photo by Andriy Andriyenko/AP Photo) 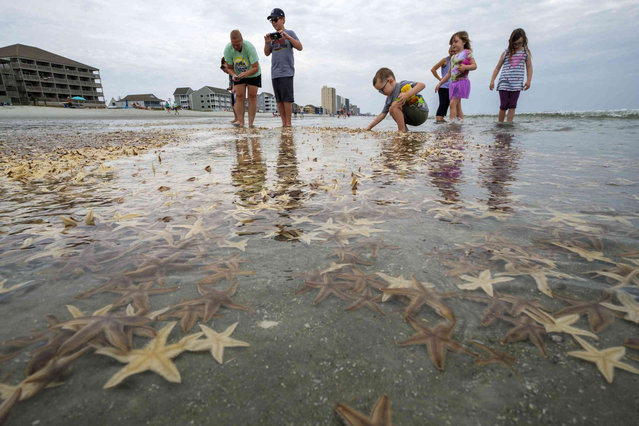 People play with starfishes as thousands of them washed ashore during low tide on Garden City Beach, S.C., June 29, 2020. Large quantities of starfish have been seen scattered along Hilton Head Island beaches recently. Although it may look alarming, this is actually a natural event that’s fairly common in the Lowcountry. (Photo by Jason Lee/The Sun News via AP Photo) 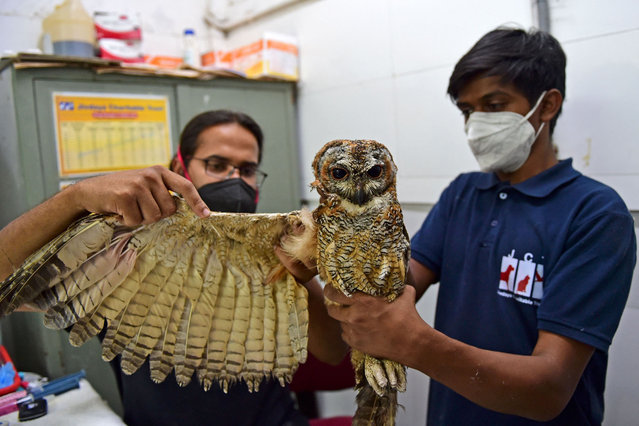 A physiotherapist (L) treats a mottled wood owl recovering from dehydration on a hot summer day at Jivdaya Charitable Trust in Ahmedabad on April 28, 2022. (Photo by Sam Panthaky/AFP Photo) 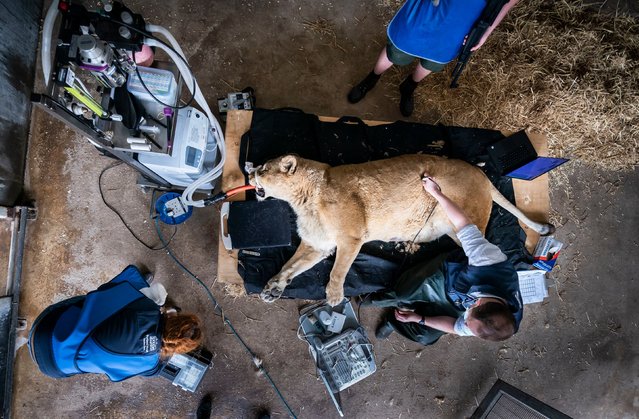 Veterinary Surgeons Oana Radu (left) and Michael Rothwell (right) with Julie the 15-year-old lioness as she is given an “MOT” at Yorkshire Wildlife Park in Doncaster on Tuesday, May 3, 2022. (Photo by Danny Lawson/PA Images via Getty Images) 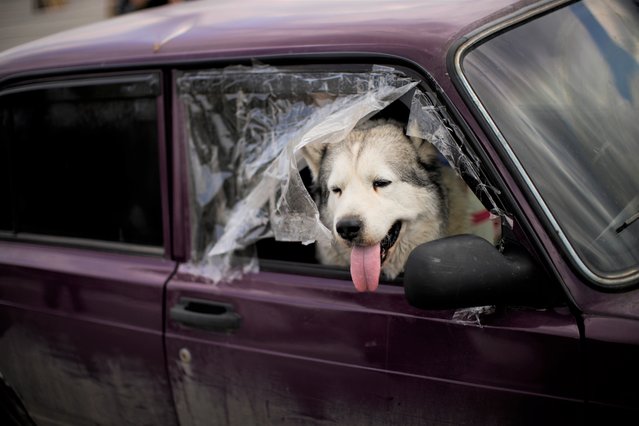 A dog peers from a car with people arriving to a reception center for displaced people in Zaporizhzhia, Ukraine, Monday, May 2, 2022. Thousands of Ukrainian continue to leave Russian occupied areas. (Photo by Francisco Seco/AP Photo) 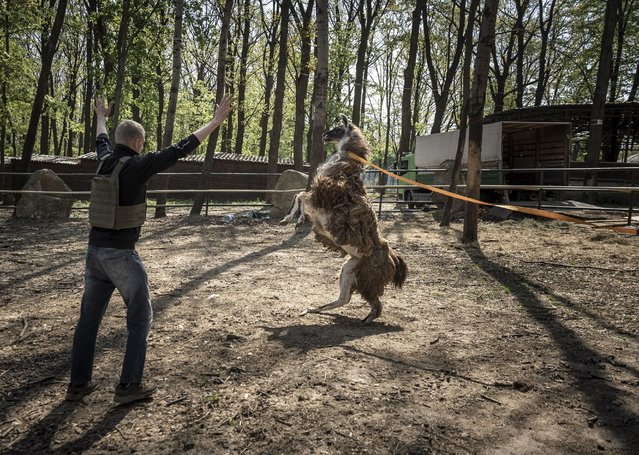 Eco-Park employees rescue animals from the Park to be brought to the town Poltava for safety after Russians shelled the area, killing dozens of animals outside of Kharkiv, Ukraine, Wednesday, May 4, 2022. Russia fired incendiary rockets into Ukraine's second-largest city on Wednesday – which ignited a large fire in a civilian neighborhood of Kharkiv – after ramping up missile attacks across the battle-scarred country. (Photo by Ken Cedeno/UPI/Rex Features/Shutterstock) 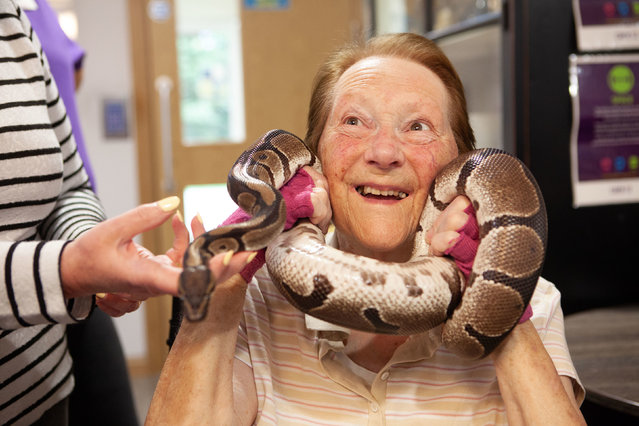 Undated handout photo issued by Care UK of Pauline Wooliams (holding a reticulated phython), who lives at Care UK's Millers Grange in Witney, Oxfordshire, got to grips with stroking and feeding a three-year-old tomistoma crocodile after telling the home's team she wanted to see one up close. The reptile-loving 85-year-old has had her “unique wish” answered after her care home welcomed three scaly visitors, a bearded dragon and a reticulated python (pictured) which joined the crocodile. Issue date: Friday May 6, 2022. (Photo by Mark Bassett/Care UK/PA Wire Press Association) 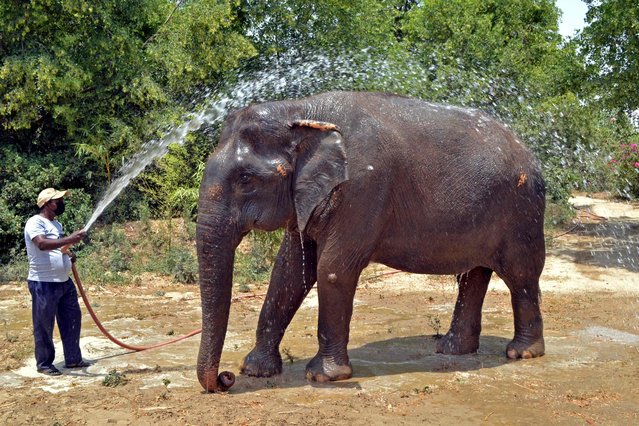 A caretaker bathes an elephant on a hot summer day inside the facility of Wildlife Conservation Organization in Farah in India's Uttar Pradesh state on May 1, 2022. (Photo by Pawan Sharma/AFP Photo) 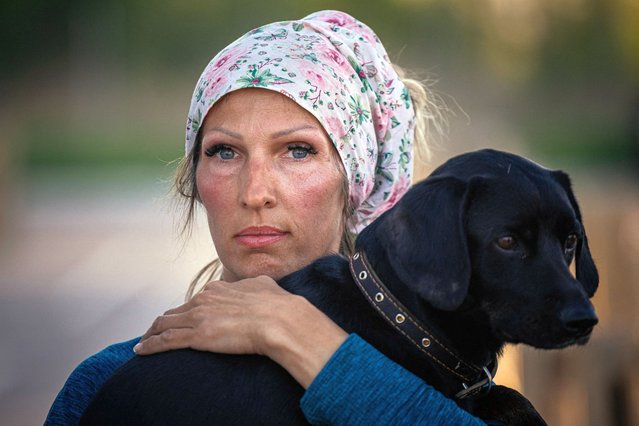 A woman holds her dog after arriving from Russian-occupied territory at a registration and processing area for internally displaced people in Zaporizhzhia, in Ukraine, on May 8, 2022. (Photo by Dimitar Dilkoff/AFP Photo)
Edit Del
16 May 2022 04:58:00, post received 0 comments
Publication archive:
←   →
Popular tags:
All tags
Last searches: