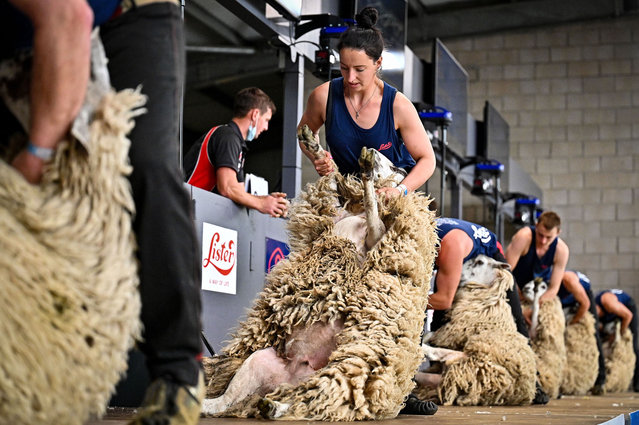 Penny Bell competes in the senior sheep shearers at Royal Highland Showcase at Ingliston on July 19, 2021 in Edinburgh,Scotland. Thousands of people have logged on to watch live streaming of the Royal Highland Show, which is being held behind closed doors this year, usually up to 190,000 people would visit the agricultural show which is held over four days. (Photo by Jeff J. Mitchell/Getty Images) 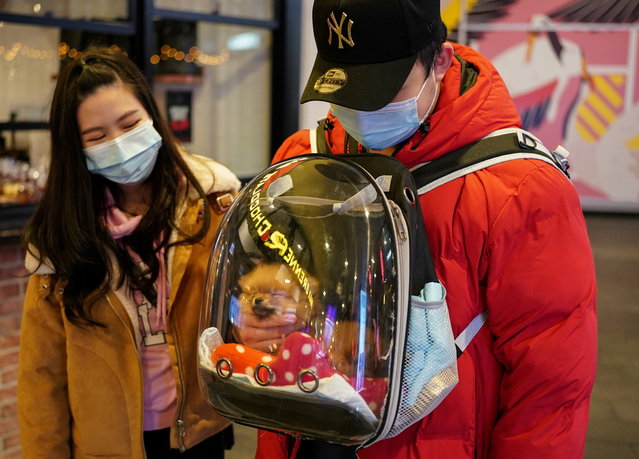 A man wearing a protective face mask pets his puppy inside a backpack while walking through the city centre during a lockdown to curb the spread of a coronavirus disease (COVID-19) outbreak in Sydney, Australia, July 6, 2021. (Photo by Loren Elliott/Reuters) 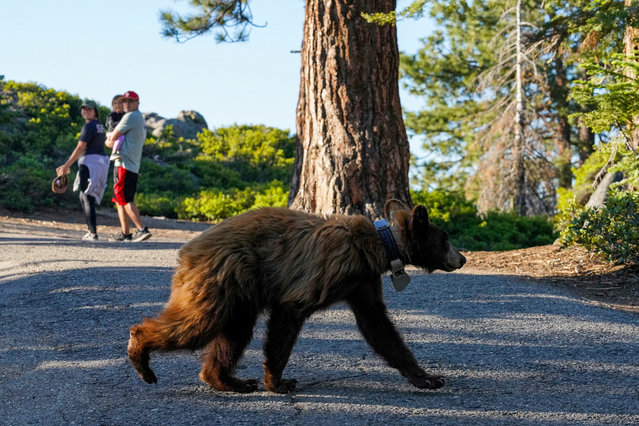 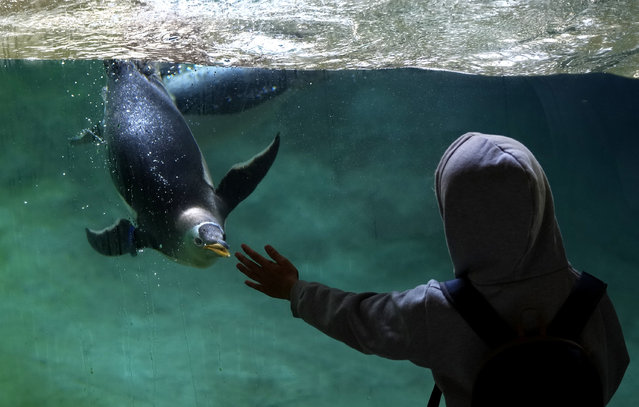 A young child reaches out to a Gentoo penguin as it swims in its enclosure at Pairi Daiza Park in Cambron-Casteau, Belgium, Monday, July 5, 2021. Pairi Daiza, one of the biggest zoos in Europe, has recently added ten Gentoo penguins to their animal population. (Photo by Virginia Mayo/AP Photo) 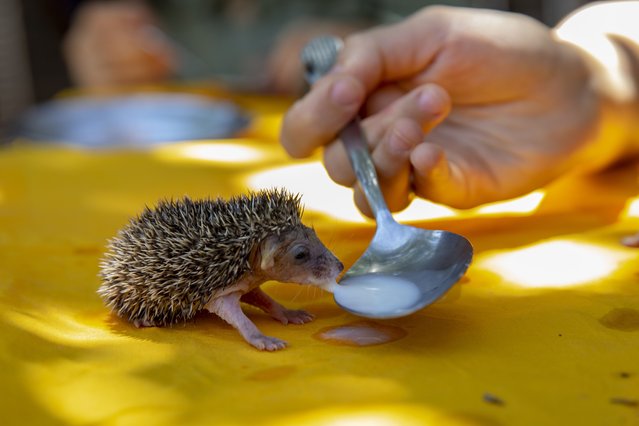 A kid feeds a hedgehog as Suer family looks after the 7 hedgehogs they adopted after their mother died in Cinar district of Diyarbakir, Turkey on July 07, 2021. (Photo by Bestami Bodruk/Anadolu Agency via Getty Images) 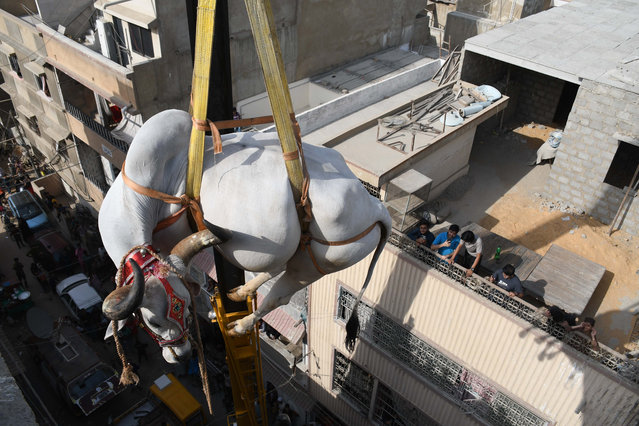 A Pakistani breeder uses crane to carry his animals down from the roof for transporting them to the livestock market for the Muslim's Eid al-Adha in Karachi, Pakistan on July 11, 2021. Due to the crowded population, agricultural land scarcity and irregular urbanization in Karachi, people sometimes keep their animals on their roofs. (Photo by Sabir Mazhar/Anadolu Agency via Getty Images) 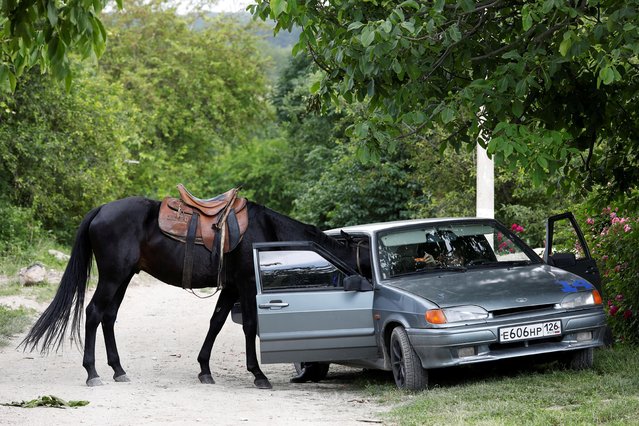 A horse puts its head into the car to eat a carrot near the Cossack cultural complex in the village of Borgustanskaya in Stavropol region, Russia on June 24, 2021. (Photo by Eduard Korniyenko/Reuters) 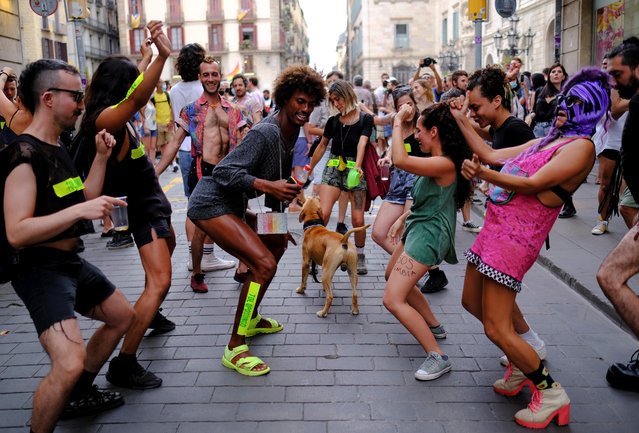 People dance at the end of a protest in support of sexual and gender liberation during Gay Pride month in Barcelona, Spain, June 26, 2021. (Photo by Nacho Doce/Reuters) 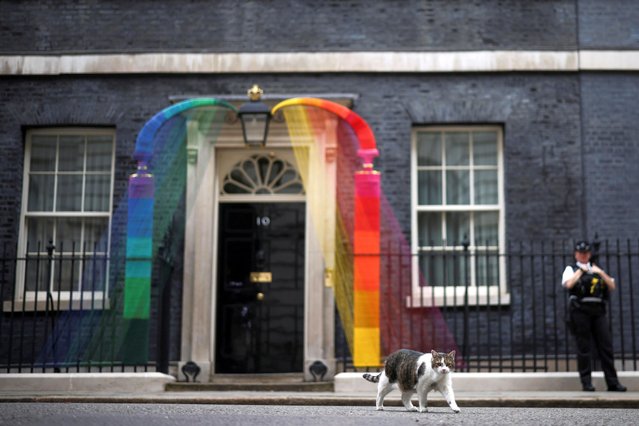 Larry the cat is seen next to a rainbow arch by Artists Louisa Loizeau and Hattie Newman that has been installed over the door at Number 10 Downing Street to mark Pride month, in London, Britain, June 29, 2021. (Photo by Henry Nicholls/Reuters) 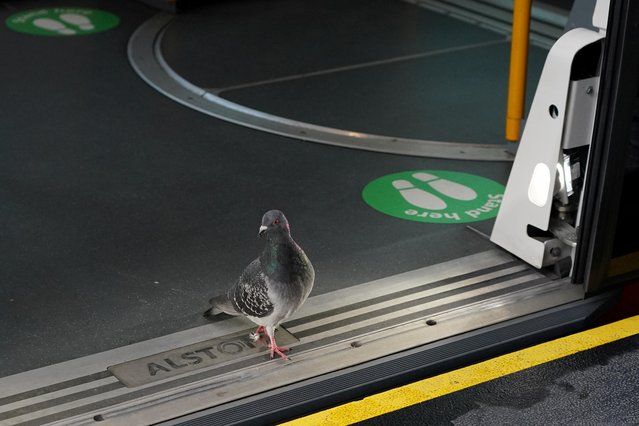 A pigeon walks past social distancing markers in an empty light rail car at Circular Quay during a coronavirus lockdown in Sydney, Australia, July 1, 2021. (Photo by Loren Elliott/Reuters) 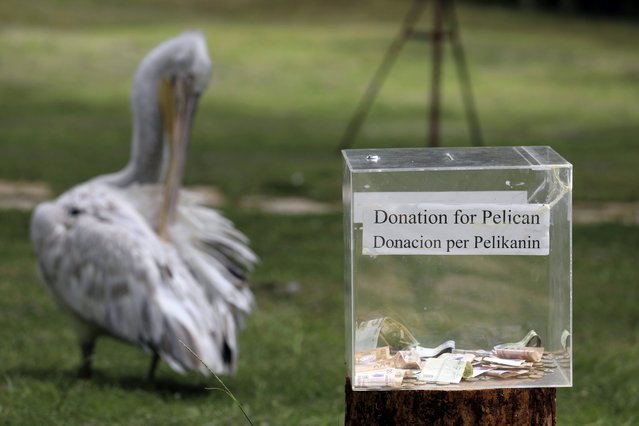 A donation box for pelicans is placed in Divjaka-Karavasta Lagoon, western Albania, Tuesday, June 22, 2021.The pandemic has brought one good thing to the Divjaka-Karavasta Lagoon in western Albania – calmness for the pelicans and increase of their numbers. Officials of the Regional Agency of Protected Areas say number of the pelicans' reproductive couples has increased by one-fifth in the last two years, from 68 in 2019 to 85 in 2020 and the same this year. (Photo by Hektor Pustina/AP Photo) 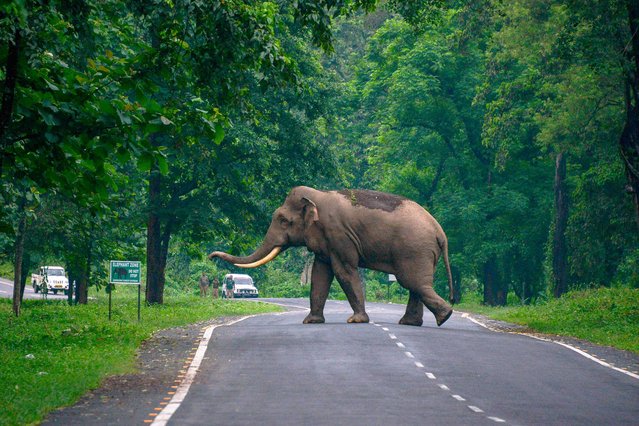 A wild male elephant crosses a road at the Mahananda Wildlife Sanctuary on the outskirts of Siliguri on July 1, 2021. (Photo by Diptendu Dutta/AFP Photo) 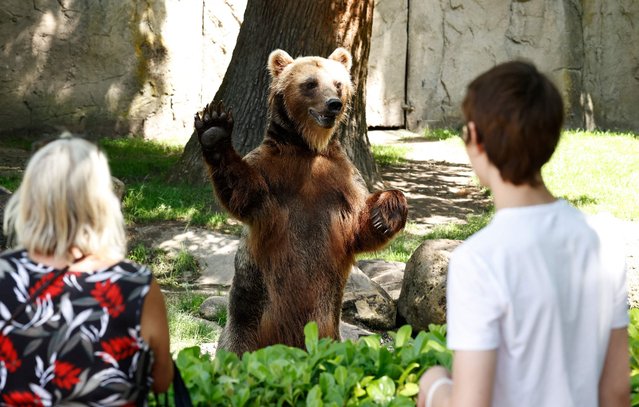 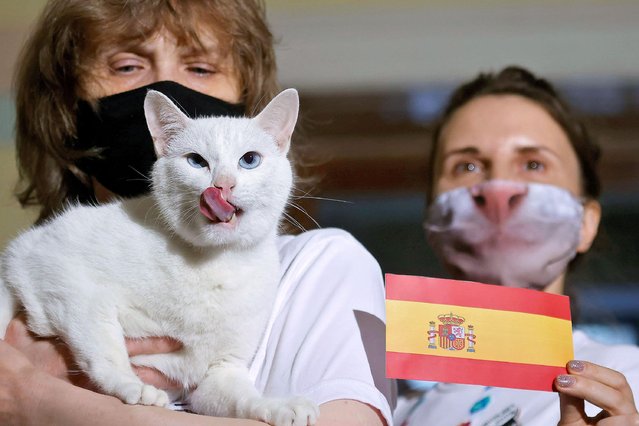 Achilles the cat, that lives in St. Petersburg's Hermitage museum, chooses Spain while attempting to predict the result of the UEFA Euro 2020 quarter final match between Switzerland and Spain during an event in Saint Petersburg, Russia on July 2, 2021. (Photo by Maxim Shemetov/Reuters) 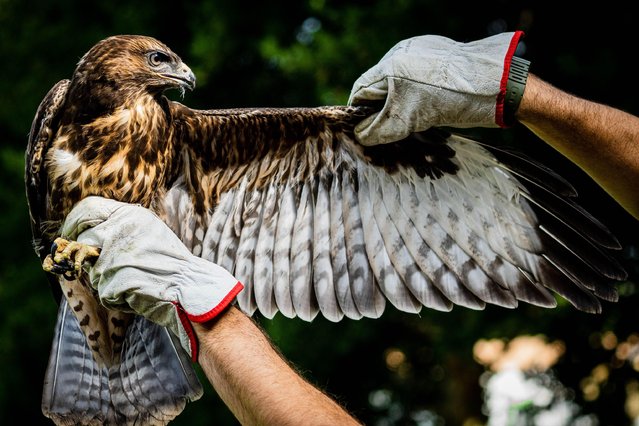 Some volunteers free the specimens of Tawny Owl (Strix aluco), a specimen of Barn Owl (Tito alba), a Long-eared Owl (Asio otus), a specimen of Kestrel (Falco tinnuculus) after being found in difficult conditions in the months of May and June, as immature, in the Capodimonte Park in Naples, Italy, 08 July 2021. (Photo by Cesare Abbate/EPA/EFE)
Edit Del
18 Jul 2021 06:04:00, post received 0 comments
Publication archive:
←   →
Popular tags:
All tags
Last searches: