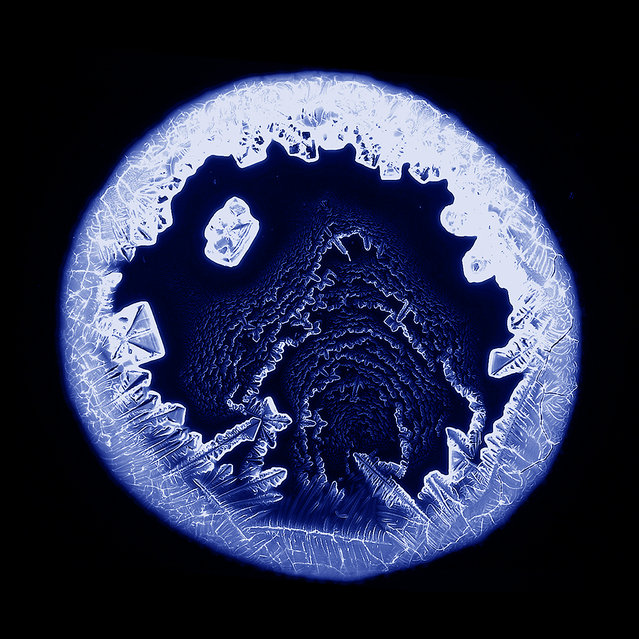 You know those marks left when a droplet of water evaporates off the table and leaves a splotch? This photo, called “Cave Of Crystals”, is of one of those, but left by a protein from cow's blood instead. (Photo by Hyoungsoo Kim/François Boulogne/Howard A. Stone) 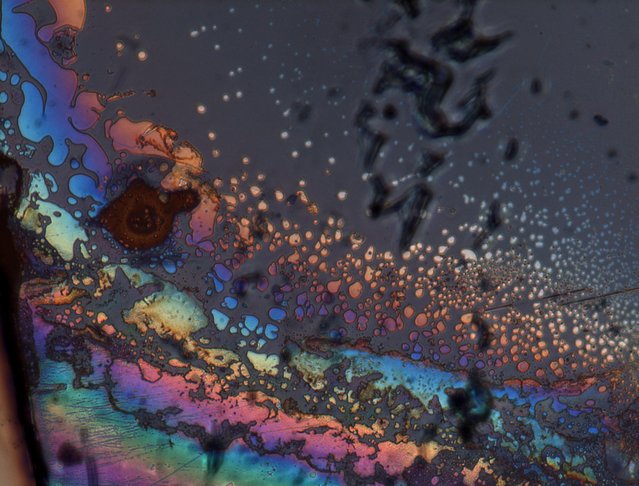 “Failed Bond” is actually a photo of a failed attempt to bond silicon and glass. When the bond is successful, the two materials form the smooth grey surface in the upper right. When it isn't, they create the beautiful colours on the lower left. (Photo by Andrew Sharo) 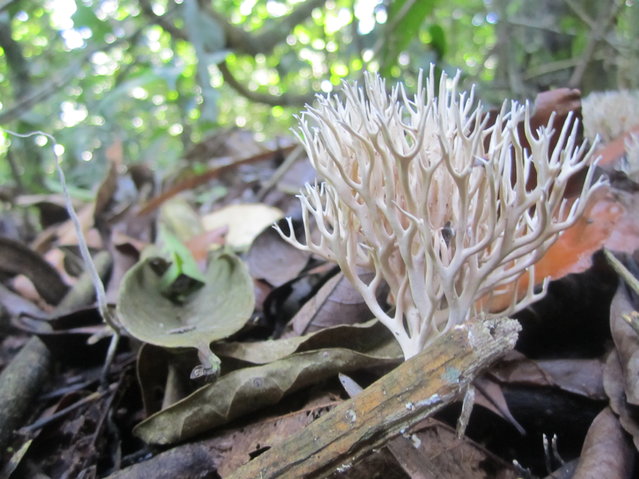 This strange coral-looking specimen is actually a mushroom. The photo, “Beautiful Destroyer”, was taken in the Panamanian tropical rainforest where the mushroom produces nitrogen, an element vital to soil health. (Photo by Sarah A. Batterman) 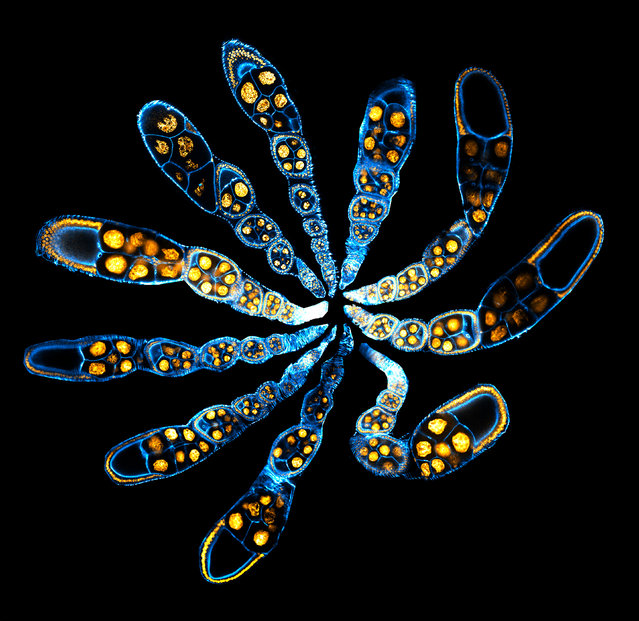 “Fruit Fly Factory” shows cross sections of ten ovaries from a female fruit fly. Each ovary acts as an “assembly line”, with each egg (yellow circles) being formed as it works its way to the larger end of the ovary. (Photo by Yogesh Goyal/Bomyi Lim/Miriam Osterfield/Stas Shvartsman) 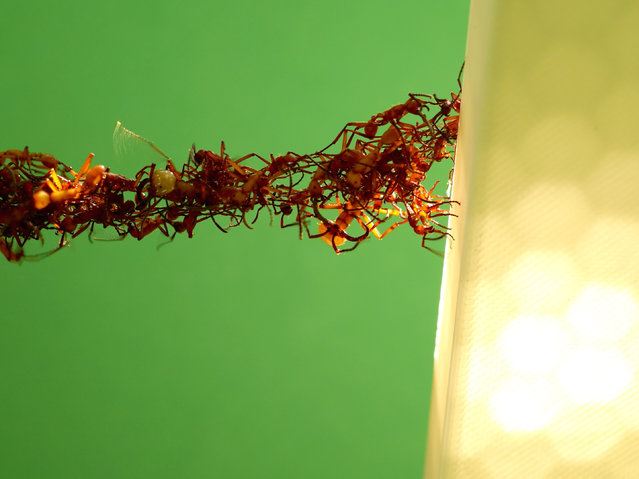 Army ants are nomadic, but when they do make a home, they make it of their own bodies. In “Living Architecture”, these army ants are forming a bridge which could act as a wall in their new home. (Photo by Matthew Lutz/Chris Reid) 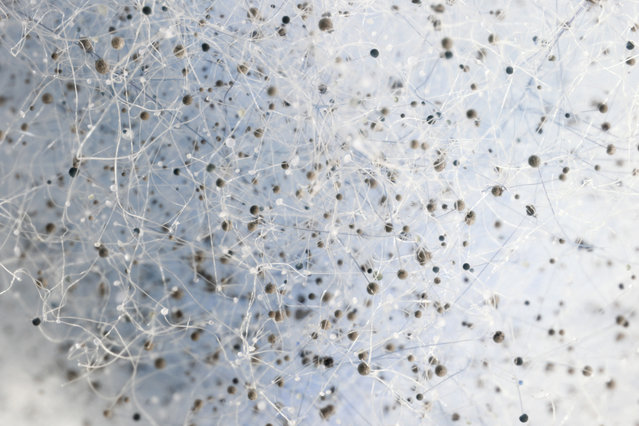 “Fungus Among Us” shows a microscopic view of a fungus growing on debris within an ant colony. The white strands transport nutrients between the reproductive spores (brown). (Photo by James S. Waters) 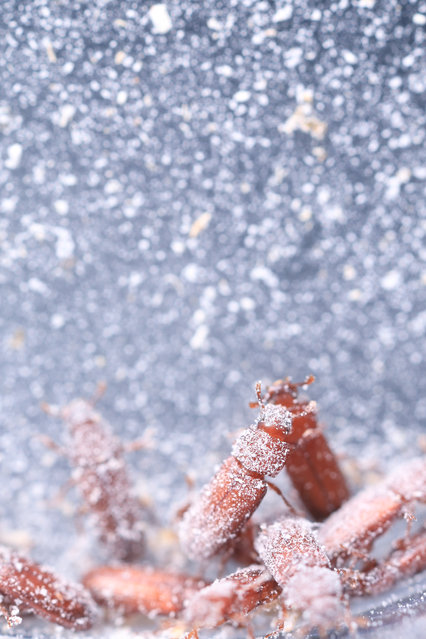 In “Let It Snow”, a group of beetles play in a shower of flour as scientists investigate how tiny parasites, which infect the beetles, change their metabolic rate. (Photo by James S. Waters/Ann T. Tate) 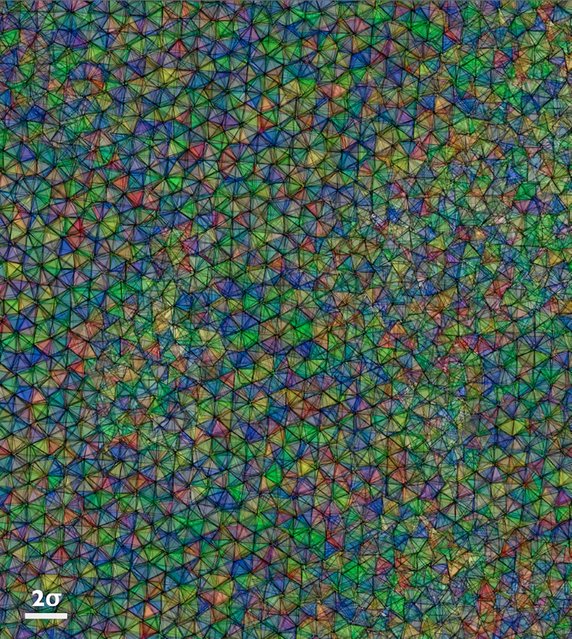 A Tetrahedron is a pyramid with four faces, and unlike cubes, there is no neat way to pack them together. In “Dodecagonal Quasicrystal”, researchers show the “close-packed ideal” with 21,932 tertrahedra. (Photo by Amir Haji-Akbari Balou) 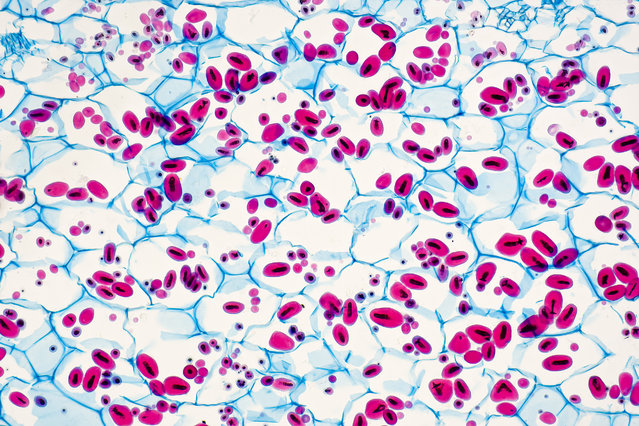 The starch-producers that make your potato chips crunchy are pictured here in pink. These pink “gems” may have actually evolved from a bacteria that creeped its way inside the potato plant. (Photo by Nathan P. Myhrvold) 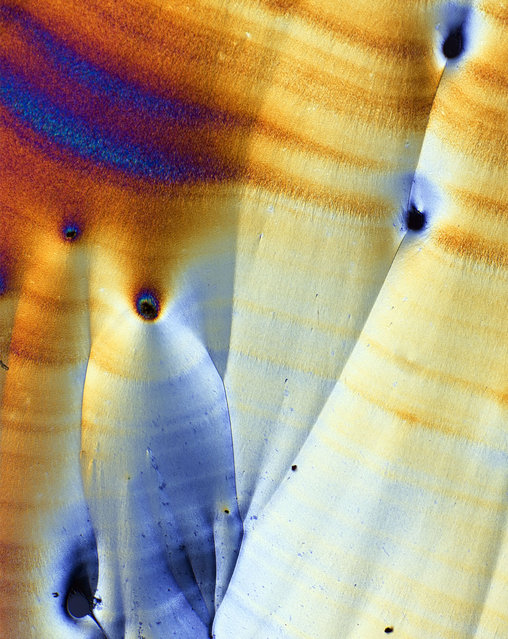 When water spiked with a heavy dose of vitamin C dries, the vitamin begins to crystallize, leaving the tiny structures you see in the photo. The crystals gain their colour by the way they bend light under certain conditions. (Photo by Nathan P. Myhrvold)
Edit Del
13 Aug 2014 09:49:00, post received 0 comments
Publication archive:
←   →
Popular tags:
All tags
Last searches: