Fact In the Fog 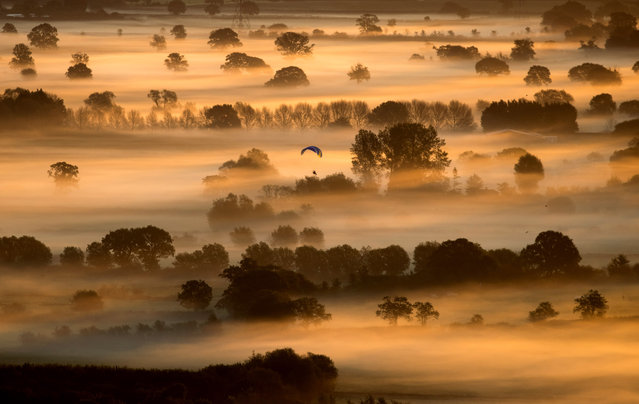 Early morning mist lingers in fields as the autumn sun rises over the Somerset Levels as viewed from Glastonbury Tor near Glastonbury on September 22, 2017 in Somerset, England. Today marks the start of the astronomical autumn, which is defined by the Earth's axis and orbit around the sun. The transition from summer to autumn is defined by the autumn equinox, when day and night are of roughly equal length, but also signals that the nights will become increasingly longer than the days until the spring equinox, when the pattern is reversed. (Photo by Matt Cardy/Getty Images) 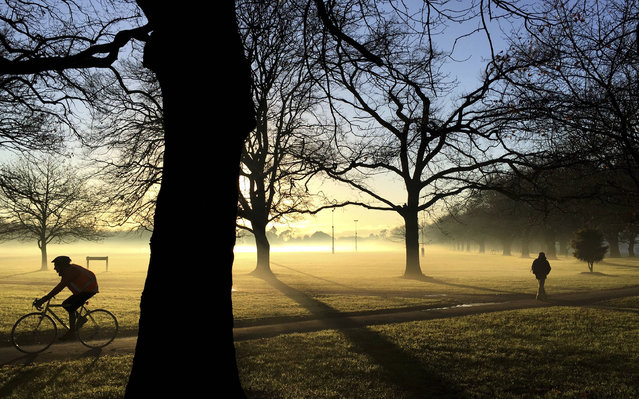 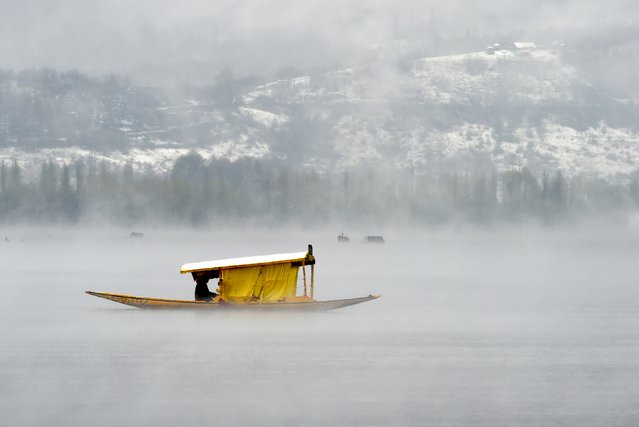 Kashmiri boatmen paddle a shikara across Dal Lake amid dense fog following rainfall in Srinagar on April 6, 2017. The Srinagar-Jammu National Highway was closed after landslides on April 6, and schools in the Kashmir Valley have been closed until April 9, following rain and fresh snowfall. (Photo by /AFP Photo)Tauseef Mustafa 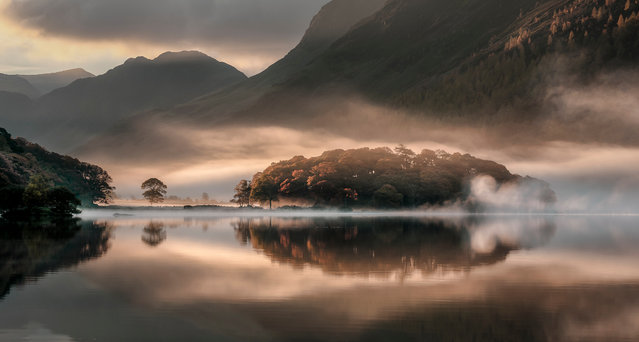 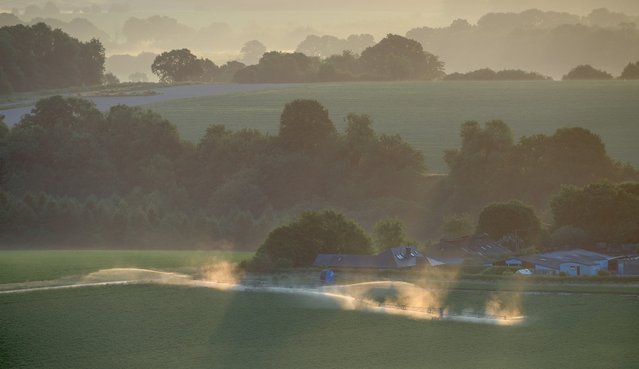 A picturesque view captured from Harting Down, overlooking the River Rother Valley during the dawn on June 18, 2017 in West Sussex, England. (Photo by Benjamin Graham/Barcroft Images) 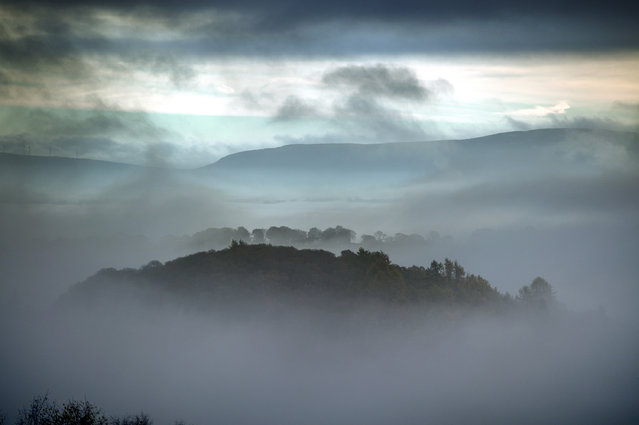 A temperature inversion over Aberfoyle looking towards the Fintry Hills on November 8, 2017 in Aberfoyle, Scotland. Temperatures across the UK have started to fall this week with many places experiencing frost, and a minus 6C recorded in Braemar in Aberdeenshire. (Photo by Jeff J Mitchell/Getty Images) 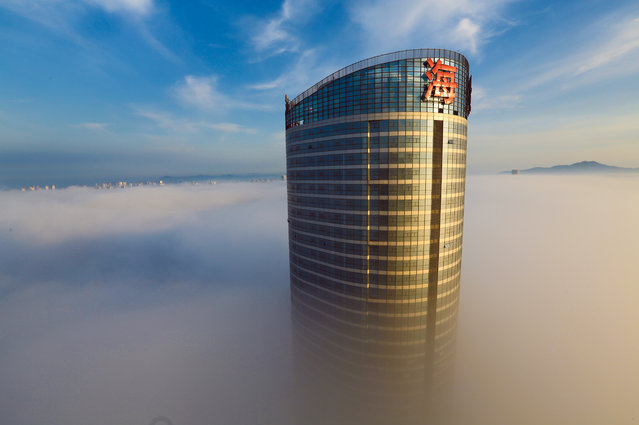 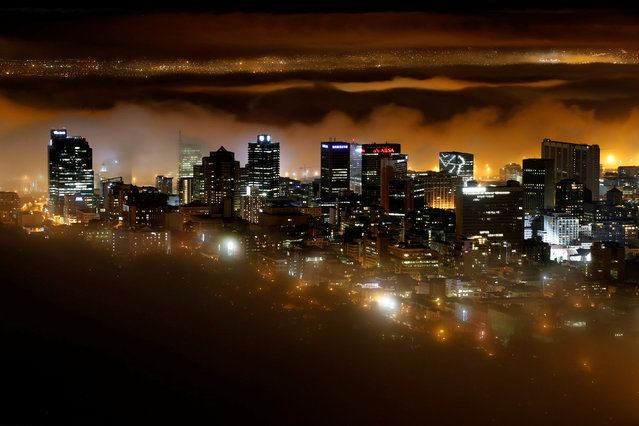 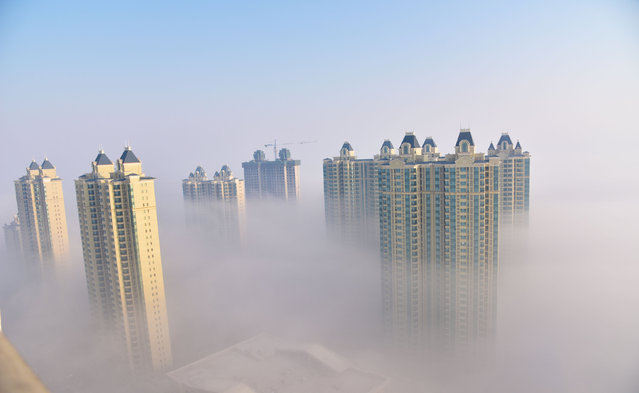 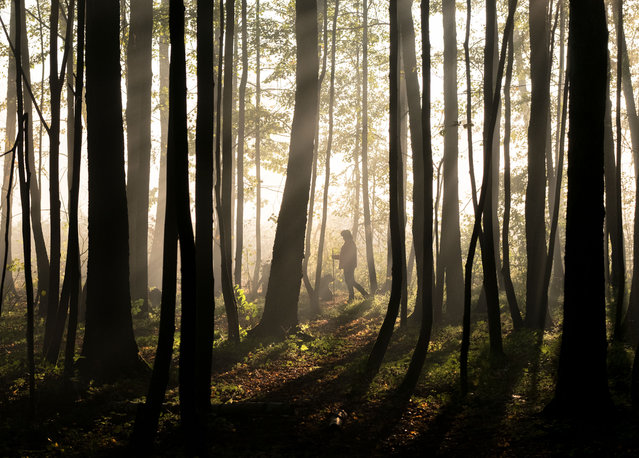 A woman walks her dog on a foggy morning near the village of Meshcherskoye, outside Moscow, early on September 24, 2017. (Photo by Yuri Kadobnov/AFP Photo) 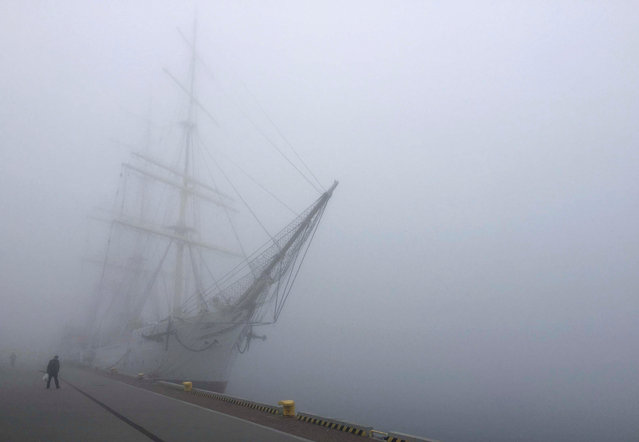 A man walks past Dar Pomorza (Gift of Pomerania), a full-rigged sailing ship, now a museum, as thick fog covers the Port of Gdynia, Poland April 4, 2017. (Photo by Radu Sigheti/Reuters) 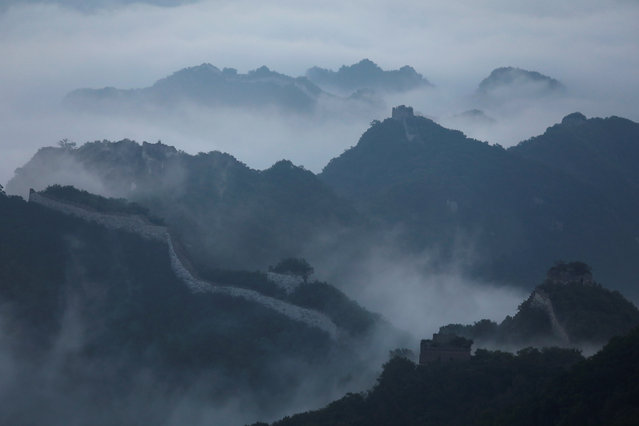 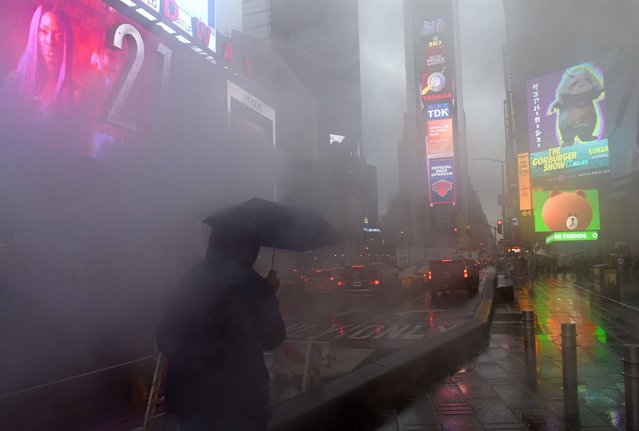 A person walks through Times Square in the early morning rain, as heavy storms are expected to hit the area on April 6, 2017 in New York. (Photo by Timothy A. Clary/AFP Photo) 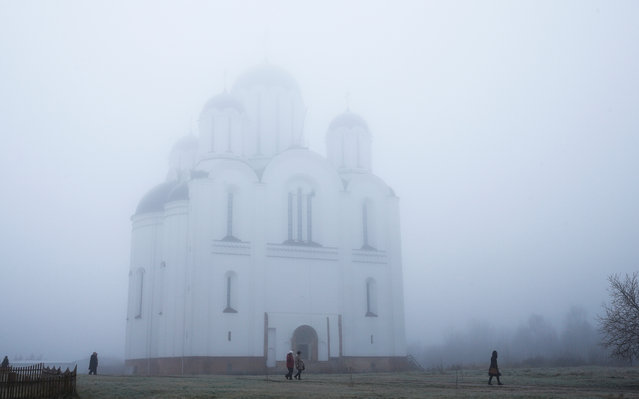 People walk past an Orthodox church after a service marking the first day of the Nativity Fast, in Minsk, Belarus on November 28, 2017. (Photo by Vasily Fedosenko/Reuters) 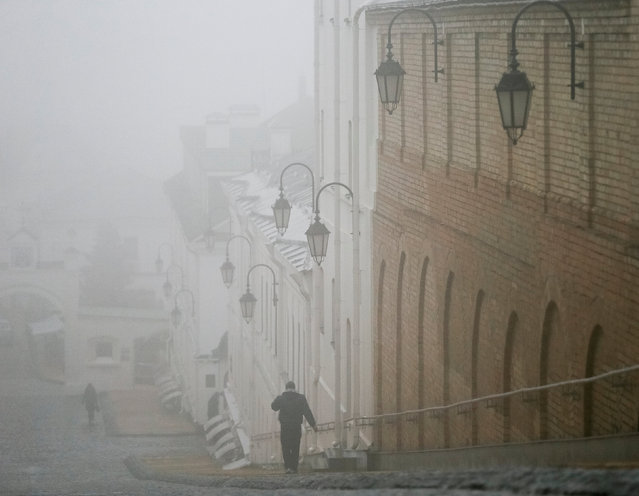 A man walks in fog in the territory of the Kiev Pechersk Lavra monastery in Kiev, Ukraine, December 1, 2017. (Photo by Gleb Garanich/Reuters) 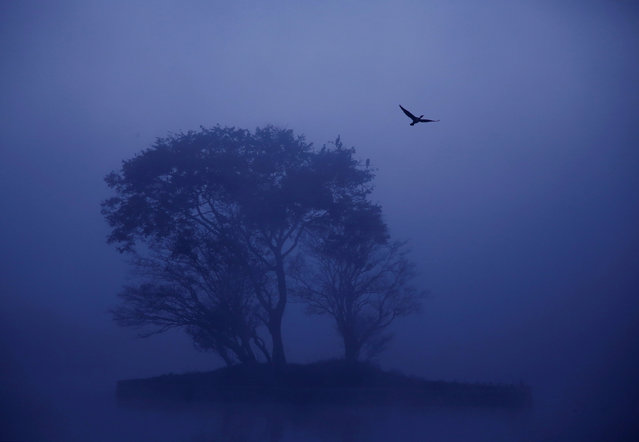 A cormorant takes flight from a tree during a foggy winter morning at Taudaha wetlands in Kathmandu, Nepal December 11, 2017. (Photo by Navesh Chitrakar/Reuters) 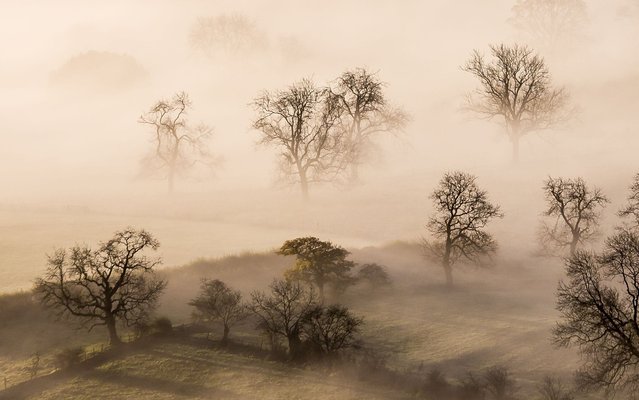 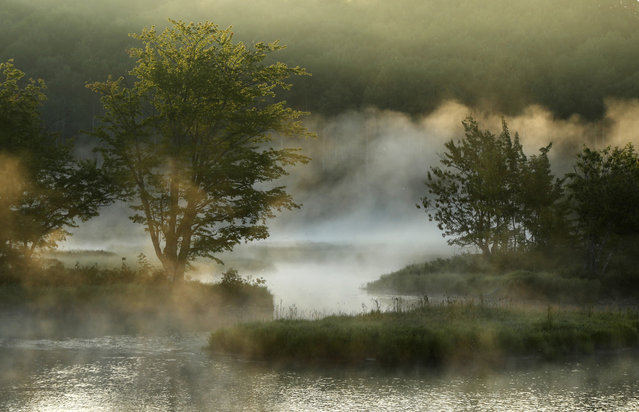 In this Thursday, August 10, 2017 photo, fog rises from the Penobscot River's East Branch in the Katahdin Woods and Waters National Monument near Patten, Maine. Interior Secretary Ryan Zinke said he’s recommending that none of 27 national monuments carved from wilderness and ocean and under review by the Trump administration be eliminated, including Katahdin Woods and Waters National Monument. (Photo by Robert F. Bukaty/AP Photo) 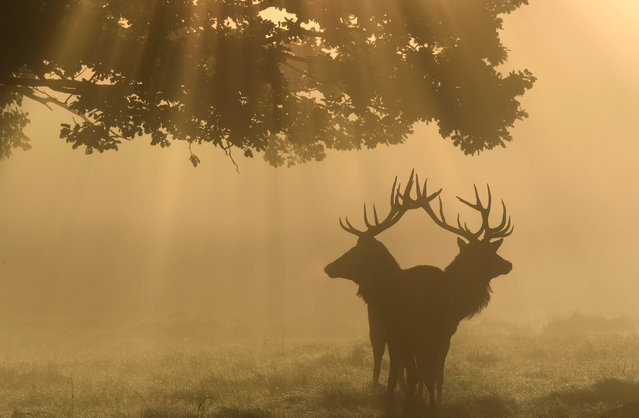 Two stag deer are seen through the mist at dawn during the annual rutting season in Richmond Park in London Britain September 22, 2017. (Photo by Toby Melville/Reuters) 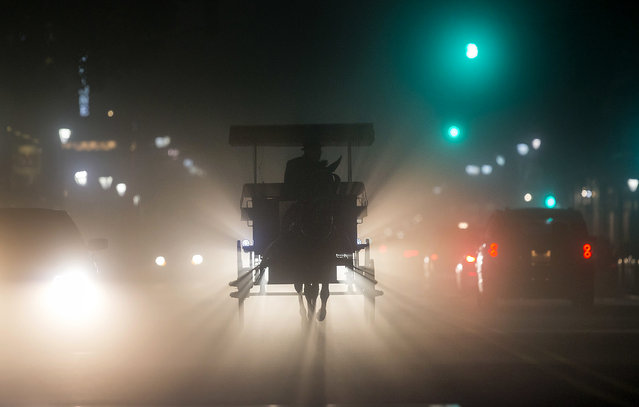