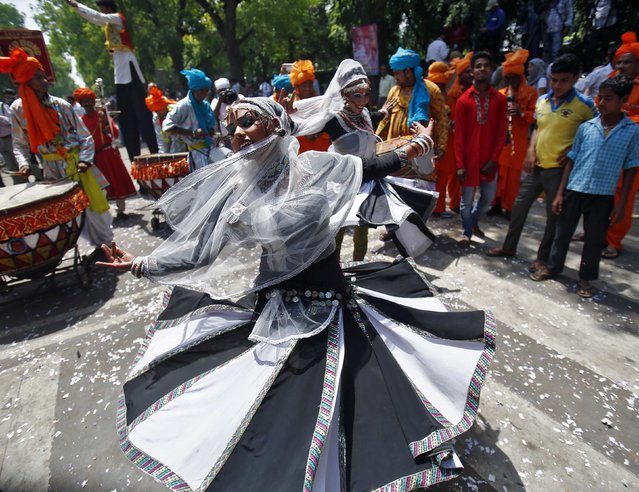 A supporter of BJP dances during celebrations after learning of initial poll results outside the party headquarters in New Delhi, on May 16, 2014. (Photo by Anindito Mukherjee/Reuters) 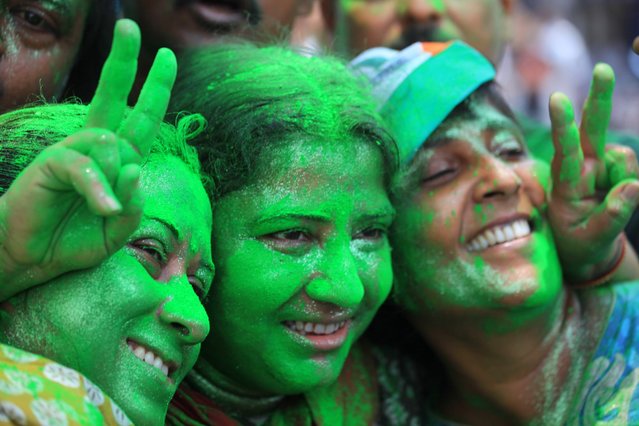 Trinamool Congress Party (TMC) supporters with green faces celebrate the election results near a counting station in Calcutta, India, on May 16, 2014. (Photo by Piyal Adhikary/EPA) 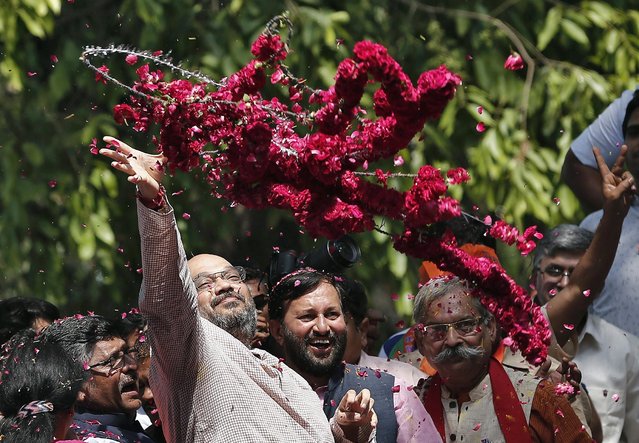 Amit Shah, a leader of BJP, throws a garland toward supporters during celebrations after learning of poll results outside the party headquarters in New Delhi, on May 16, 2014. Opposition candidate Narendra Modi will be the next prime minister of India, with early election results showing the pro-business Hindu nationalist and his party headed for the biggest victory the country has seen in 30 years. (Photo by Adnan Abidi/Reuters) 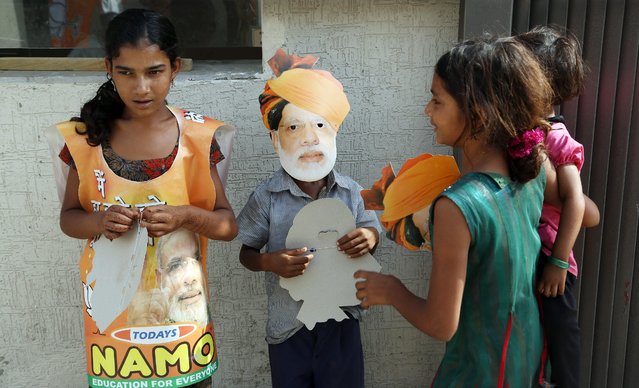 A child wears a mask of Bharatiya Janata Party's prime ministerial candidate Narendra Modi at the BJP’s state headquarters in Gandhinagar, on May 16, 2014. (Photo by Divyakant Solanki/EPA) 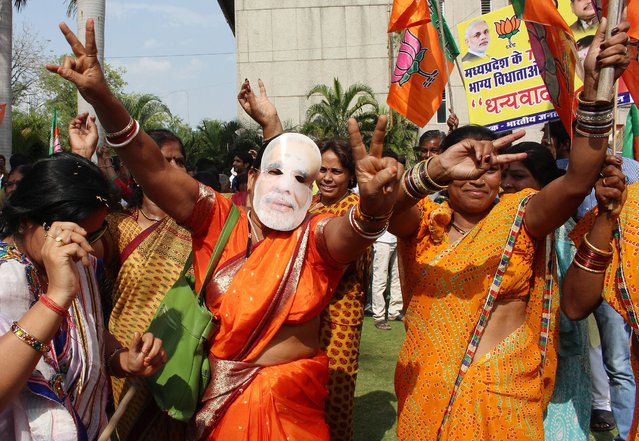 Bharatiya Janata Party supporters celebrate their party's victory in Bhopal, on May 16, 2014. (Photo by Sanjeev Gupta/EPA) 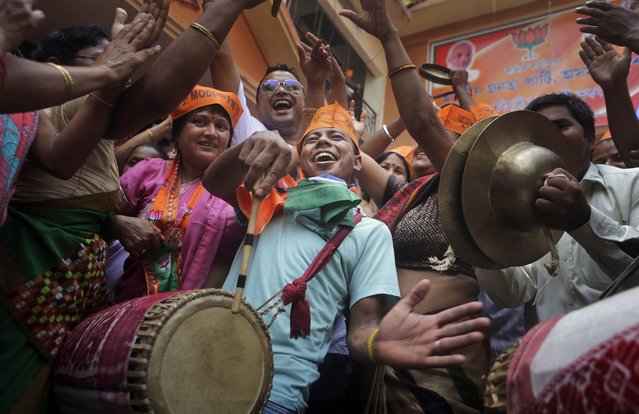 Bharatiya Janata Party (BJP) supporters celebrate the party's winning preliminary result outside their office in Gauhati, India, Friday, May 16, 2014. India's opposition leader Narendra Modi and his party won national elections in a landslide Friday, preliminary results showed, driving the long-dominant Congress party out of power in the most commanding victory India has seen in more than a quarter century. (Photo by Anupam Nath/AP Photo) 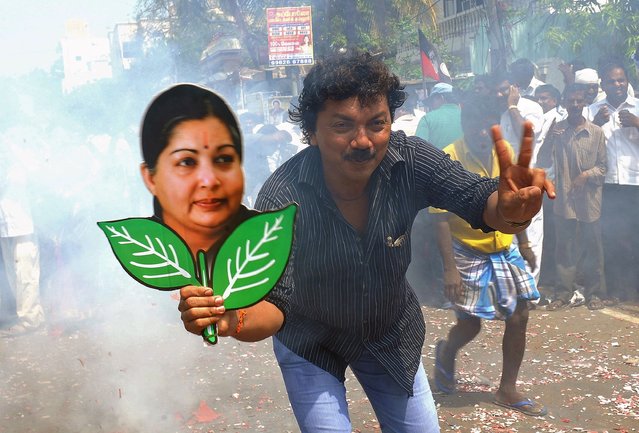 A supporter holds up a placard bearing the portrait of southern Indian state of Tamil Nadu Chief Minister and General Secretary of The All India Anna Dravida Munnetra Kazhagam (AIADMK) Party J. Jayalalithaa during celebrations in Chennai on May 16, 2014. (Photo by AFP Photo/STR) 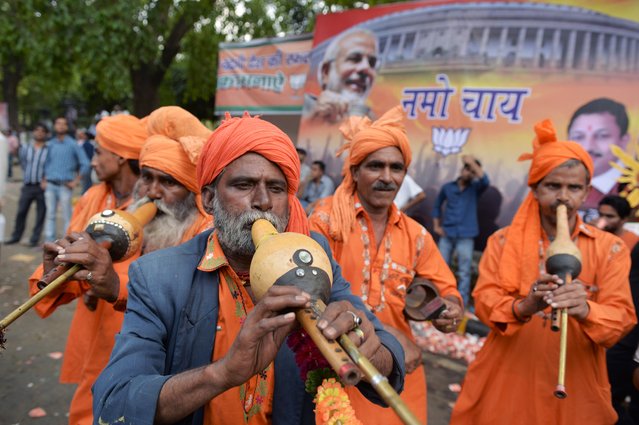 A band of Indian musicians plays music for a group of paying customers who wanted to dance as they celebrate at the Bharatiya Janata Party (BJP) headquarters in New Delhi on May 16, 2014. India's triumphant Hindu nationalists declared “the start of a new era” in the world's biggest democracy after hardline BJP leader Narendra Modi propelled them to a stunning win on a platform of revitalizing the sickly economy. (Photo by Roberto Schmidt/AFP Photo) 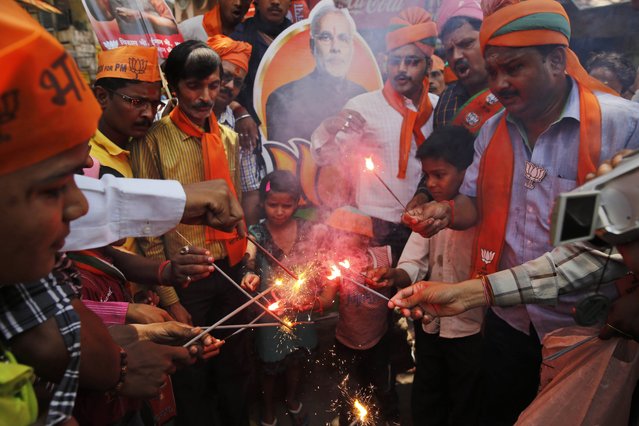