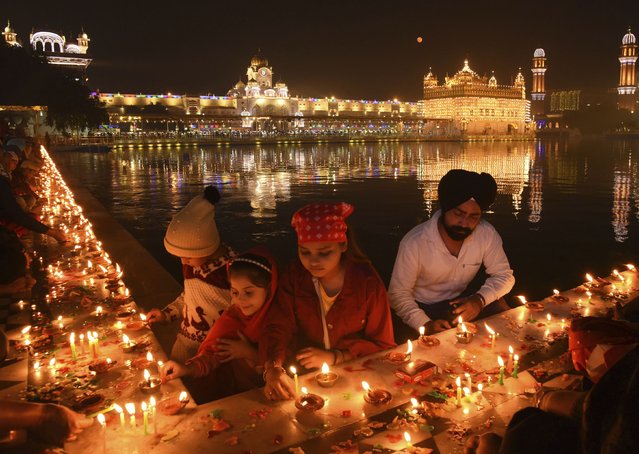 Sikh devotees Light candles at the illuminated Golden Temple on the occasion of the birth anniversary of Guru Nanak, the first Sikh Guru and the founder of Sikhism, in Amritsar, India, Friday, November 19, 2021. (Photo by Prabhjot Gill/AP Photo) 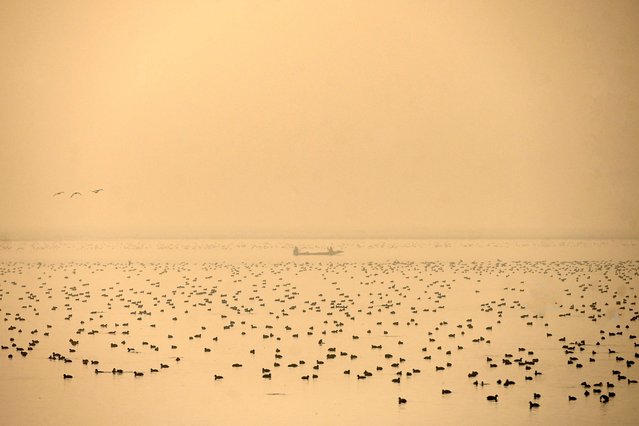 Men row a boat amid foggy conditions in Dal lake in Srinagar on November 22, 2021. (Photo by Tauseef Mustafa/AFP Photo) 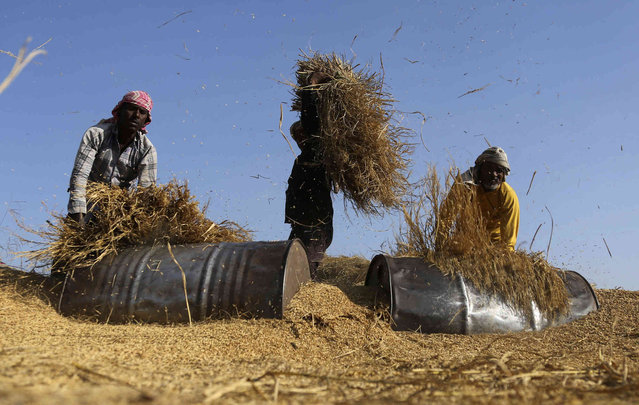 Indian farmers thresh paddy in a field on the outskirts of Jammu, India, Saturday, November 20, 2021. In a major reversal, Indian Prime Minister Narendra Modi announced Friday that he would repeal the controversial agriculture laws that sparked yearlong protests from tens of thousands of farmers and posed a significant challenge to his administration. (Photo by Channi Anand/AP Photo) Jagdishbhai Himmatbhai Solanki, with a breathing problem, is wheeled inside a COVID-19 hospital for treatment during the ongoing coronavirus disease (COVID-19) outbreak in Ahmedabad, India, November 23, 2021. (Photo by Amit Dave/Reuters) 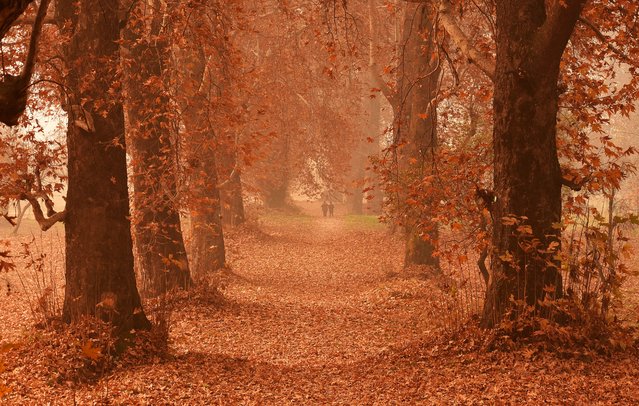 A view of the Mughal garden covered with fallen leaves of mighty Chinar trees on a cold morning in Nishat Srinagar, Kashmir on November 22, 2021. Autumn colors are reaching their peak with trees particularly Chinar changing their colors as the days are becoming shorter showcasing the approach of winter in Kashmir (Photo by Faisal Khan/Anadolu Agency via Getty Images) 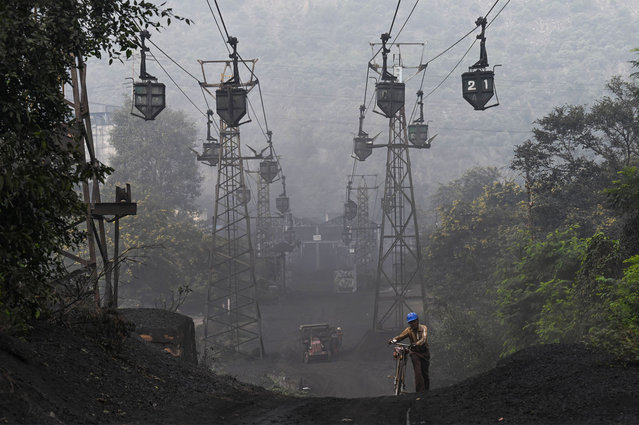 A worker pushes his bicycle under a line of cable trolleys transporting coal in Sonbhadra, Uttar Pradesh, on November 19, 2021. (Photo by Money Sharma/AFP Photo) 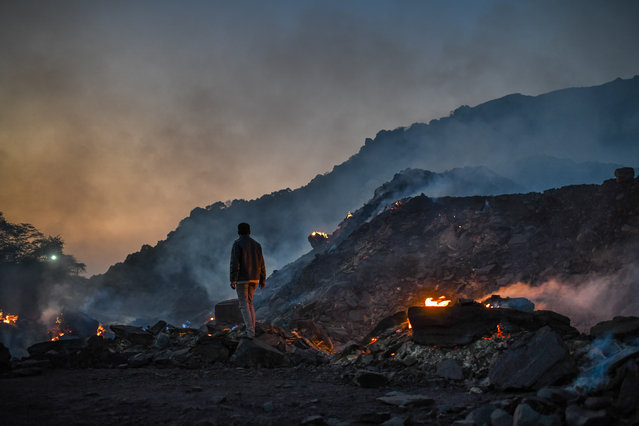 A man stands near burning coal waste inside a coal mine on November 22, 2021 in Sonbhadra, Uttar Pradesh, India. India is rapidly transitioning to renewables, investing in widespread solar and wind installations, though it still remains reliant on coal for about 70% of its energy needs, media reports said. India's heavy reliance on coal was a key issue at the recent Cop26 conference. Many coal-producing regions within the country remain essential for the functioning of the economy, employing many thousands of laborers, though they have been criticized for what activists say is their contribution to air and groundwater pollution, as well as for the detrimental effects coal-related pollution is said to have on respiratory diseases. (Photo by Ritesh Shukla/Getty Images) 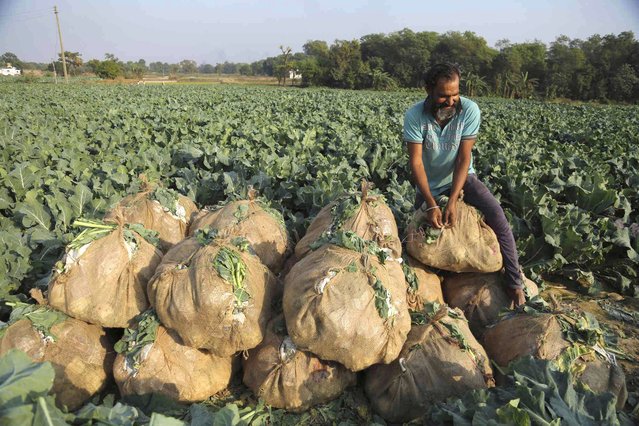 A farmer harvests cauliflower from a field on the outskirts of Jammu, India, Wednesday, November 24, 2021. (Photo by Channi Anand/AP Photo) 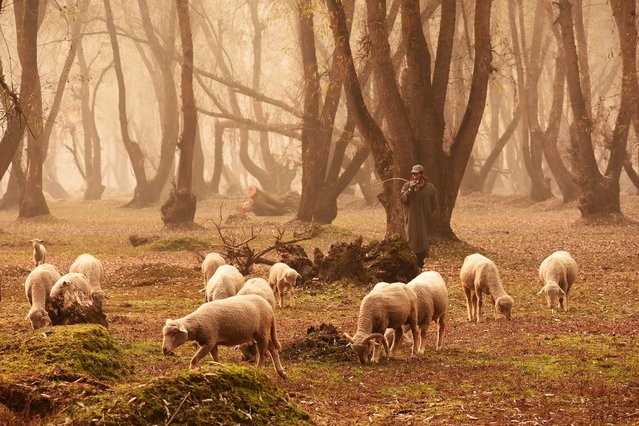 Lambs and sheep graze on a foggy autumn morning in central Kashmir on November 24, 2021.Preparations for winter is in full swing across the Kashmir valley as autumn colors are reaching their peak with trees changing their colors as the days are becoming shorter showcasing the approach of winter in Kashmir. (Photo by Faisal Khan/Anadolu Agency via Getty Images) 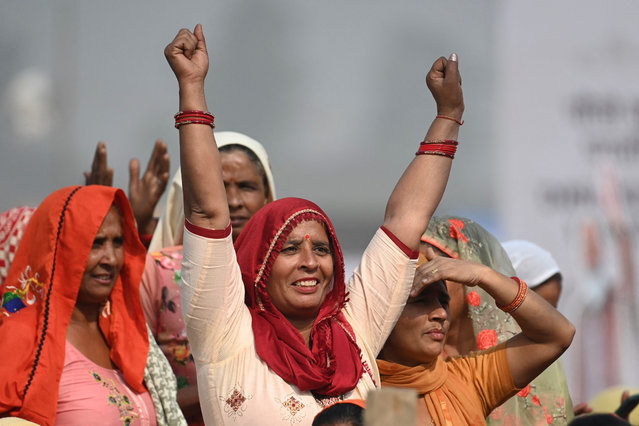 A woman reacts during an event to lay the foundation stone of the Noida International Airport in Jewar on November 25, 2021. (Photo by Money Sharma/AFP Photo) 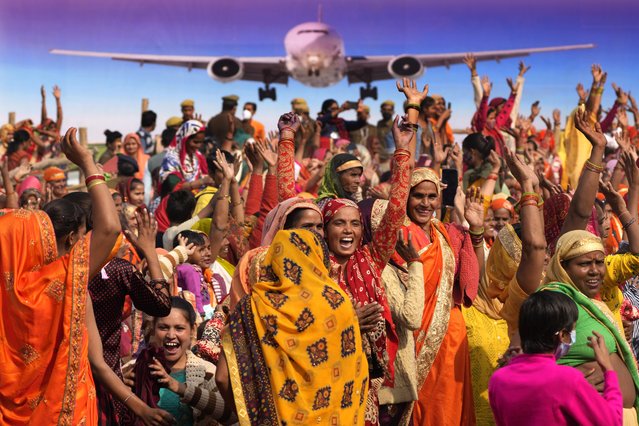 Women dance and shout slogans as they wait for the arrival of Indian prime minister Narendra Modi for the foundation laying ceremony of an international airport in Jewar, about 100 kilometers (62 miles) from New Delhi, India, Thursday, November 25, 2021. (Photo by Manish Swarup/AP Photo) 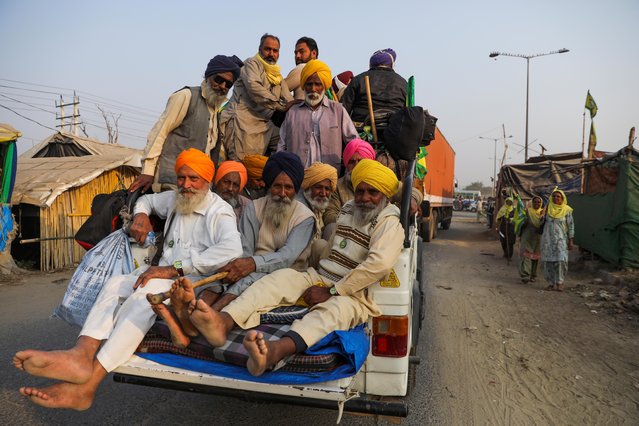 Farmers travel in a vehicle as they return back from Punjab state to attend the first anniversary of farmers' protests, on the outskirts of Delhi at Pakora Chowk near Tikri border, India, November 25, 2021. (Photo by Anushree Fadnavis/Reuters) 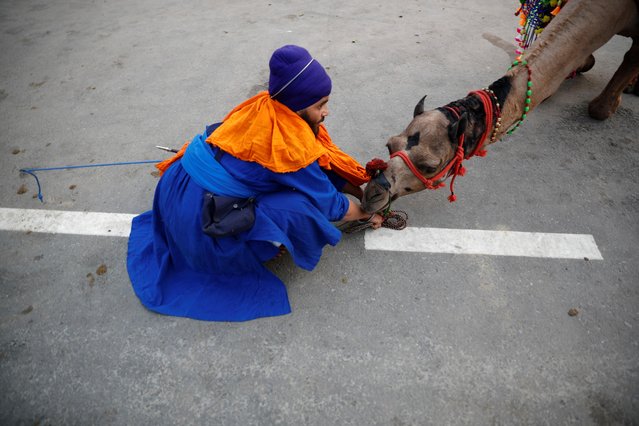 A Nihang, or a Sikh warrior, sits with his camel as farmers gather to mark the first anniversary of their protests at Ghazipur site near Delhi-UP border, India, November 26, 2021. (Photo by Adnan Abidi/Reuters) 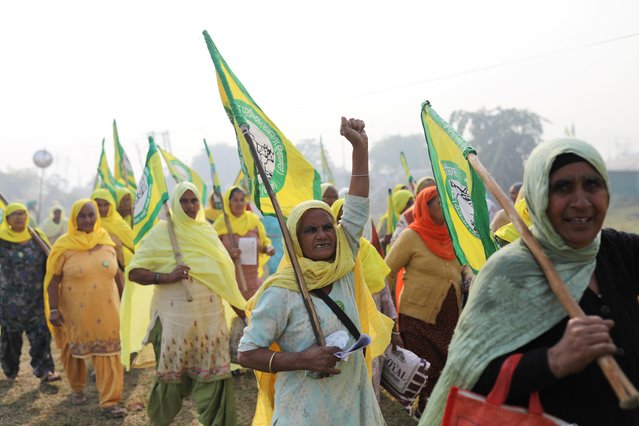 Farmers gather to mark the first anniversary of their protests on the outskirts of Delhi at Pakora Chowk near Tikri border, India, November 26, 2021. (Photo by Anushree Fadnavis/Reuters) 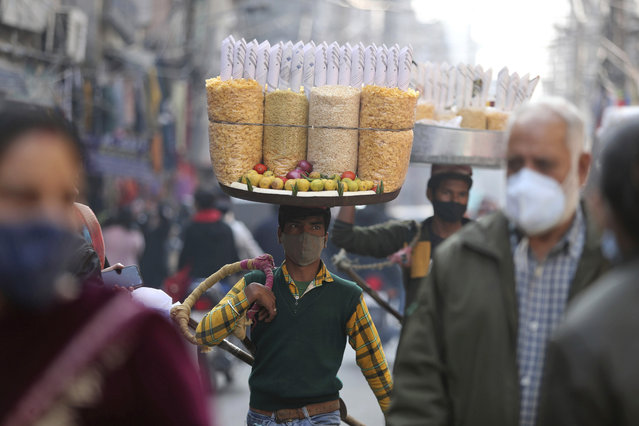 A snacks vendor wears a face mask as a precaution against COVID-19 and walks in a market area in Jammu, India, Saturday, November 27, 2021. (Photo by Channi Anand/AP Photo) 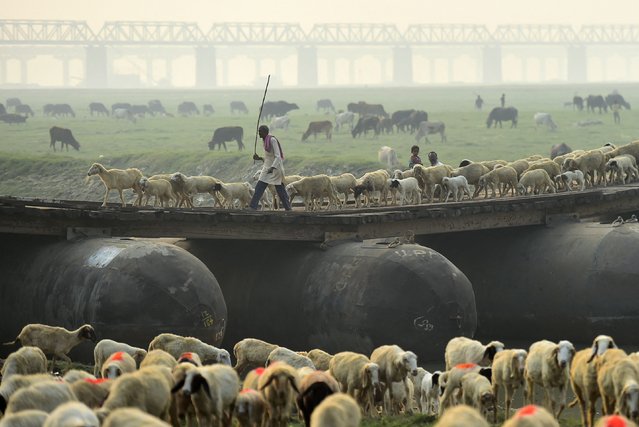 A shepherd leads a flock of sheep over a pontoon bridge in Allahabad on November 27, 2021. (Photo by Sanjay Kanojia/AFP Photo) 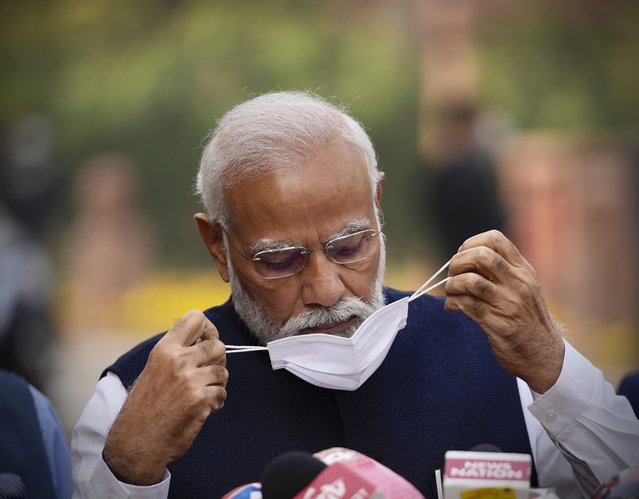 Indian Prime Minister Narendra Modi, removes his mask before addressing the media on the opening day of the winter session of Parliament in New Delhi, India, Monday, November 29, 2021. India’s parliament on Monday repealed a set of controversial agriculture laws that inflamed tens of thousands of farmers, whose year-long protest has posed one of the biggest challenges to Prime Minister Narendra Modi’s administration. (Photo by Manish Swarup/AP Photo) 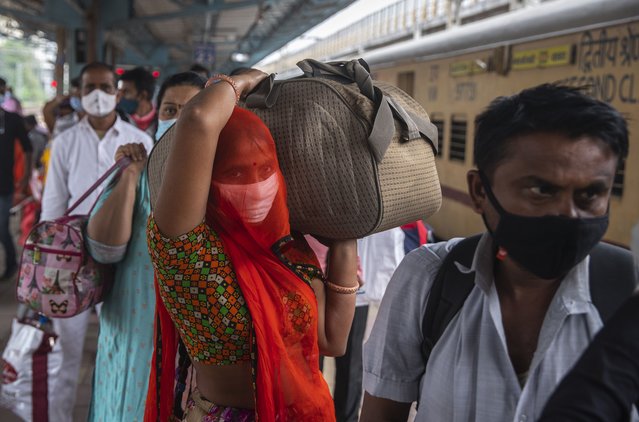 Travellers wait in queue to test for COVID-19 at a train station in Mumbai, India, Tuesday, November 30, 2021. (Photo by Rafiq Maqbool/AP Photo) 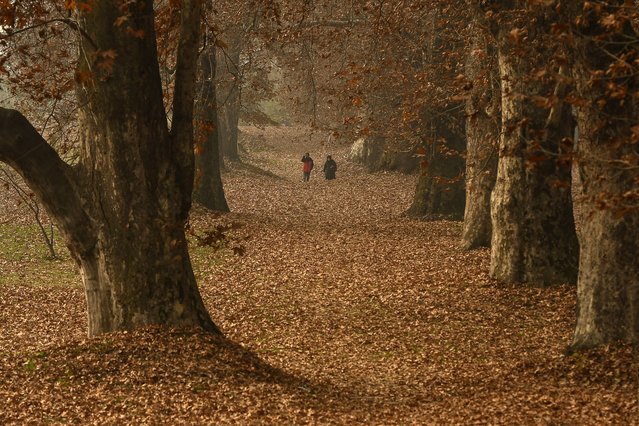