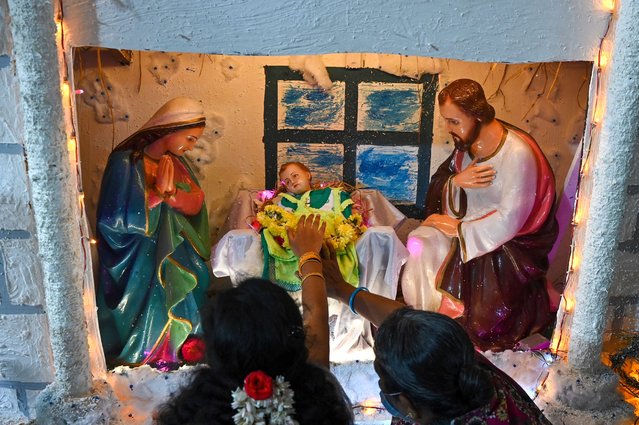 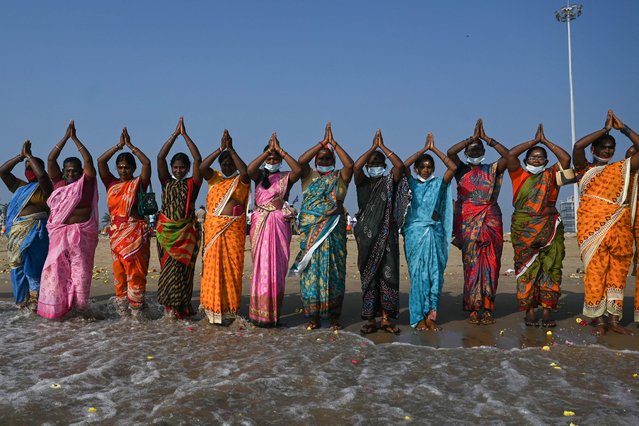 Women perform rituals during a ceremony for the victims of the 2004 tsunami at Pattinapakkam Beach in Chennai on December 26, 2021. (Photo by Arun Sankar/AFP Photo) 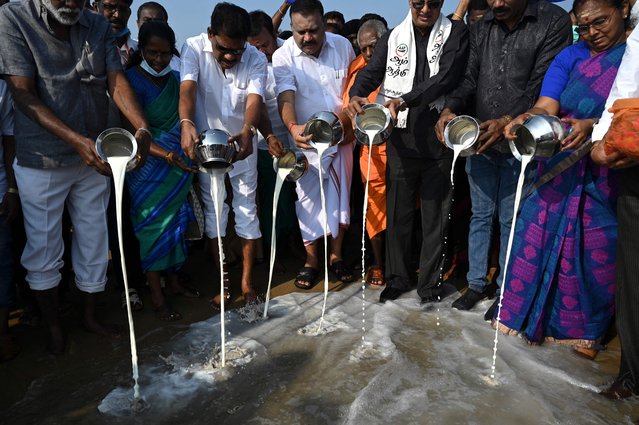 People pour milk in to seas as they perform rituals during a ceremony for the victims of the 2004 tsunami at Pattinapakkam Beach in Chennai on December 26, 2021. (Photo by Arun Sankar/AFP Photo) 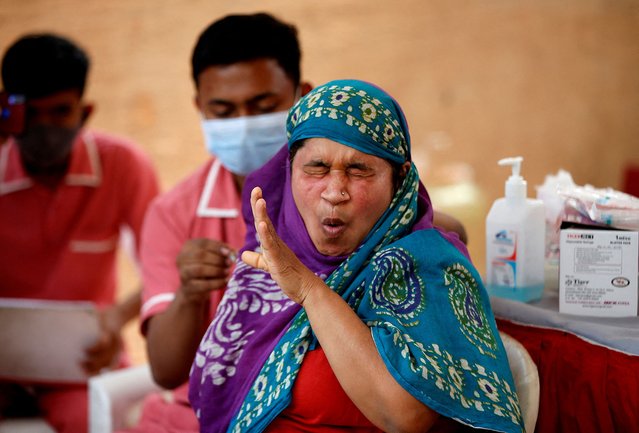 A woman reacts as she receives a dose of the COVISHIELD vaccine against the coronavirus disease (COVID-19), manufactured by Serum Institute of India, at a vaccination centre in Ahmedabad, India, December 27, 2021. (Photo by Amit Dave/Reuters)

A Kashmiri vegetable vendor washes sacks of turnip before taking them to the market for sale on a cold day in Srinagar, Indian controlled Kashmir, Sunday, December 26, 2021. (Photo by Mukhtar Khan/AP Photo) 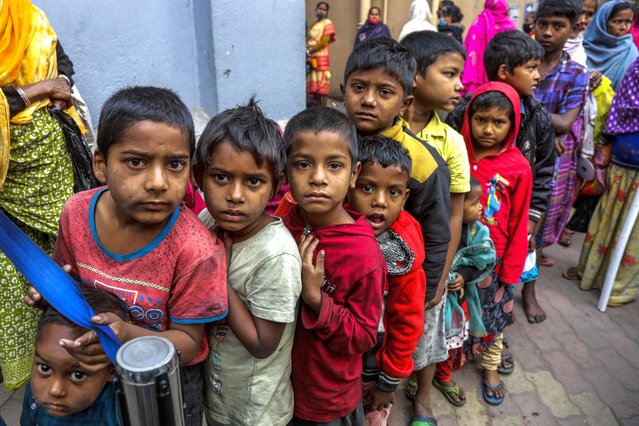 Homeless children stand in a queue to receive morning meal from Missionaries of Charity, the order founded by Saint Teresa, at its headquarter in Kolkata, India, Tuesday, December 28, 2021. India‚ government has blocked Mother Teresa, charity from receiving foreign funds, saying the Catholic organization did not meet conditions under local laws, dealing a blow to one of the most prominent groups running shelters for the poor. (Photo by Bikas Das/AP Photo) 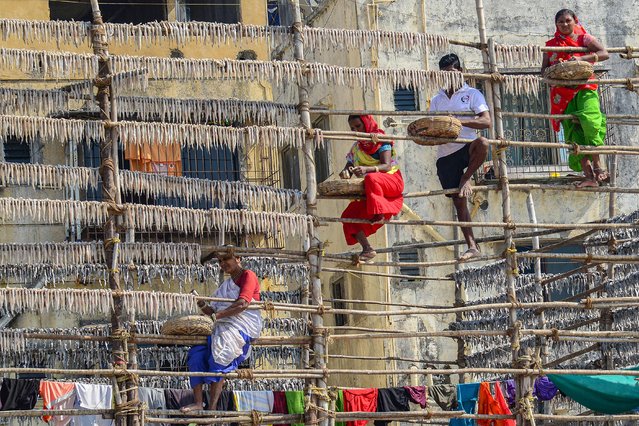 Fisher-women climb up on a scaffolding to hang Bombay duck fish to dry in the sun at the Versova beach in Mumbai on December 29, 2021. (Photo by Sujit Jaiswal/AFP Photo) 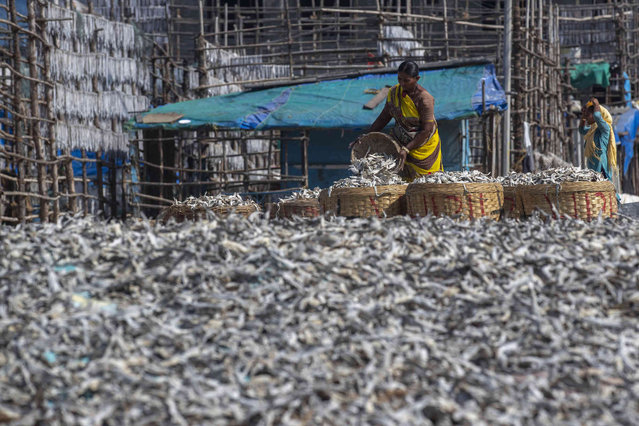 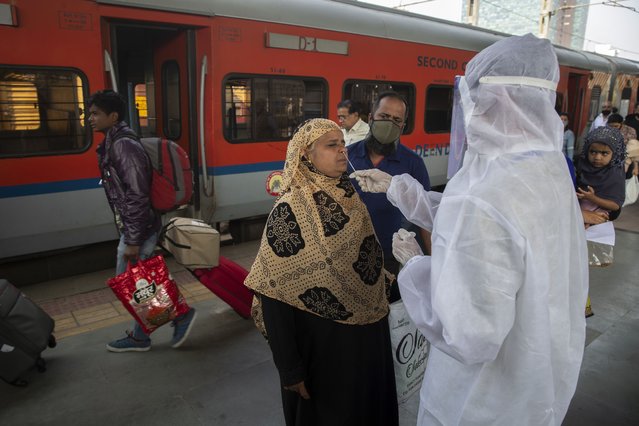 A health worker takes a swab sample of a traveler to test for COVID-19 at a train station in Mumbai, India, Thursday, December 30, 2021. (Photo by Rafiq Maqbool/AP Photo) 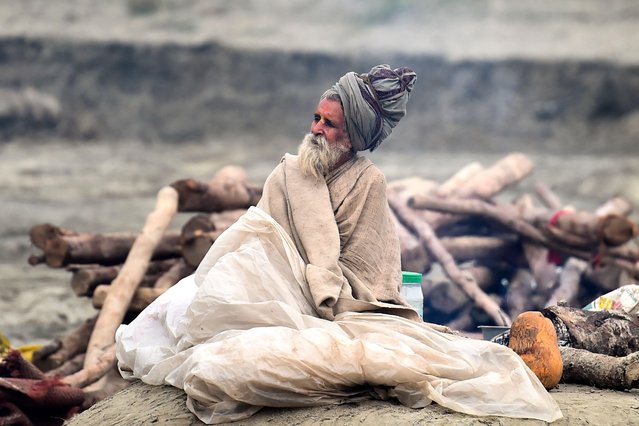 A Sadhu (holy man) sits as he arrives on the banks of the Sangam area, the confluence of rivers Ganges, Yamuna, and the mythical Saraswati, ahead of the upcoming Magh Mela festival, in Allahabad on December 29, 2021. (Photo by Sanjay Kanojia/AFP Photo) 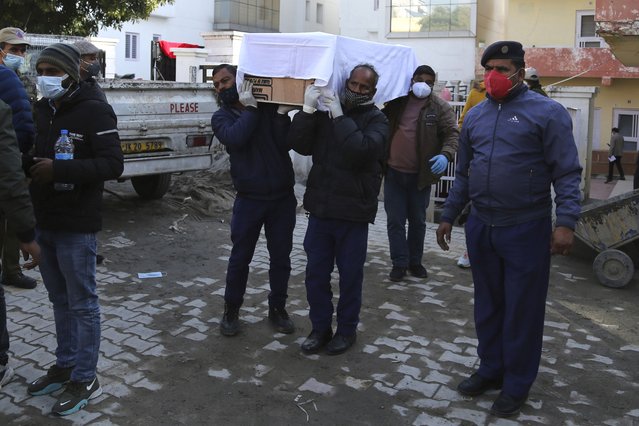 Health workers carry the coffin of a victim, who died in a stampede at the Mata Vaishnav Devi shrine, at a hospital in Katra, India, Saturday, January 1, 2022. A stampede at a popular Hindu shrine in Indian-controlled Kashmir killed at least 12 people and injured 13 others on New Year’s Day, officials said. (Photo by Channi Anand/AP Photo)

A Kashmiri man looks through the broken glass of a parked vehicle near the site of a shootout on the outskirts of Srinagar, Indian controlled Kashmir, Friday, December 31, 2021. Three suspected rebels were killed and four government forces wounded in a shootout early Friday, officials said, as violence increased in recent weeks. (Photo by Dar Yasin/AP Photo) 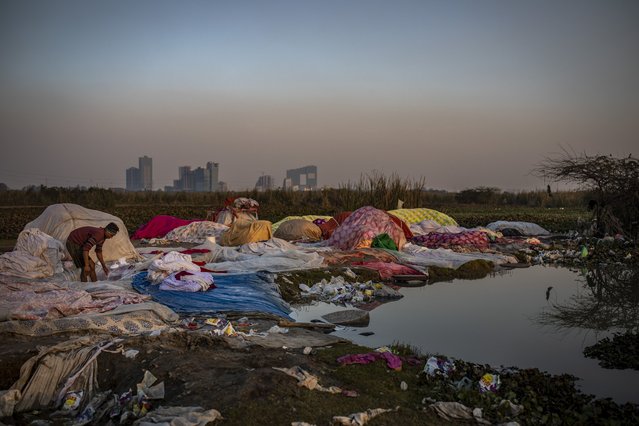 A Dhobi, or washerman, washes bedclothes on the floodplain of Yamuna River in New Delhi, India, Thursday, December 30, 2021. Dhobis are traditional laundry workers who wash clothes by hand and dry them in the sun, an occupation which has been in existence for generations. Most cities in India have Dhobi Ghat, or washermen's area, where the city's pile of clothes is laundered. This practice is still popular in India despite modern technology. (Photo by Altaf Qadri/AP Photo) 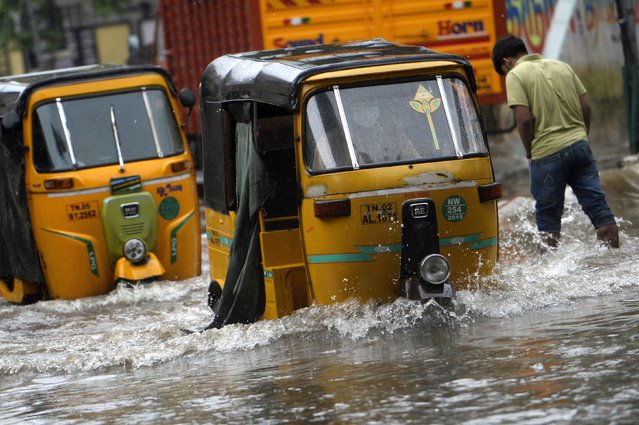 Auto-rickshaws make their way along a waterlogged street after a heavy rainfall in Chennai on December 31, 2021. (Photo by Arun Sankar/AFP Photo) 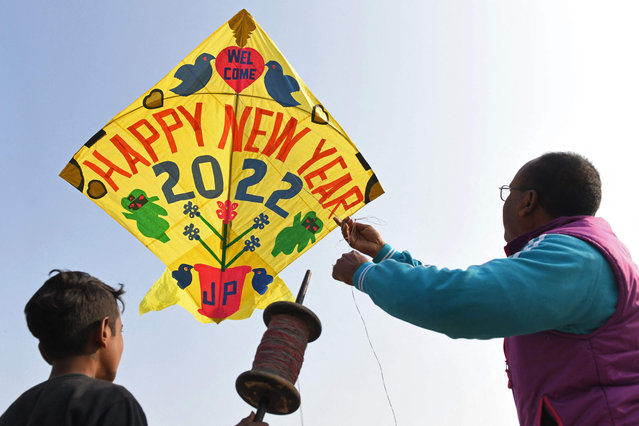 A kitemaker flies a kite ahead of the New Year celebrations on the outskirts of Amritsar on December 31, 2021. (Photo by Narinder Nanu/AFP Photo) 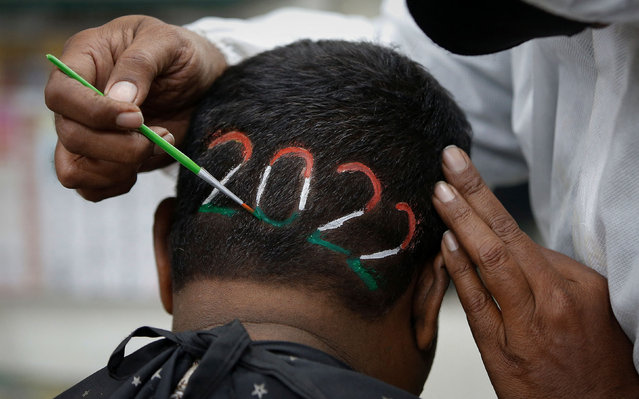 A barber colours the digits of the number 2022 after cutting a man's hair to welcome the upcoming new year, at a barbershop in Ahmedabad, India, December 31, 2021. (Photo by Amit Dave/Reuters)

Light decorations can be seen in Kolkata, India, 31 December, 2021. (Photo by Indranil Aditya/NurPhoto via Getty Images) 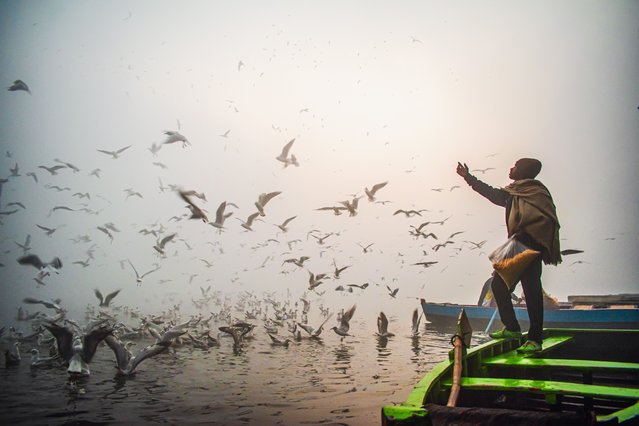 People arrive early in the morning on the bank of Yamuna River to see the migratory seagulls which comes from Siberia in winters on the first day of the 2022 year amid dense fog as Delhi plunged to minimum temperature dips to 4 degrees Celsius on the first day of New Year. (Photo by Mohsin Javed/Pacific Press/Rex Features/Shutterstock) 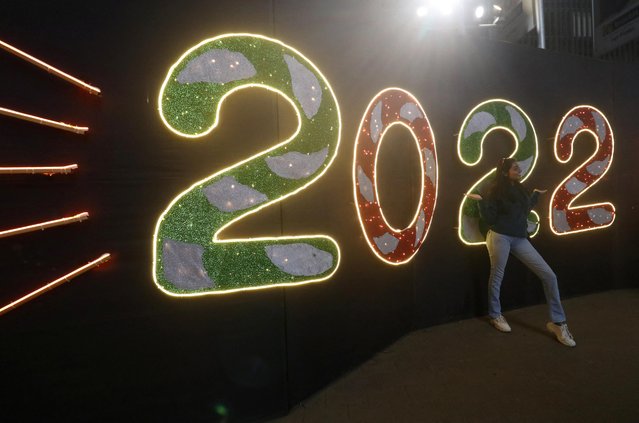 A girl poses for a picture next to an installation at a mall on New Year's Eve, amid the spread of the coronavirus disease (COVID-19) in Mumbai, India, December 31, 2021. (Photo by Niharika Kulkarni/Reuters)
Edit Del
04 Jan 2022 07:50:00, post received 0 comments
Publication archive:
←   →
Popular tags:
All tags
Last searches: