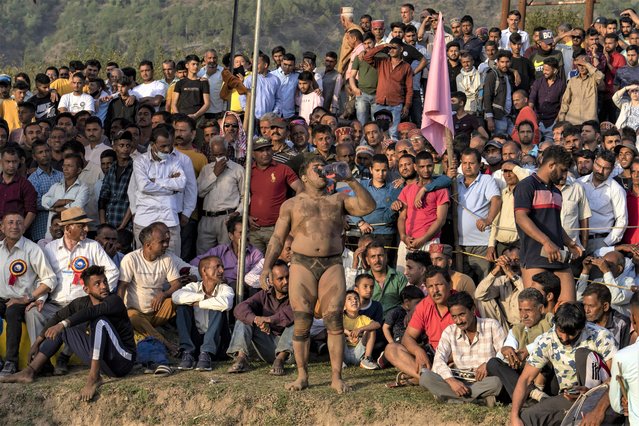 A wrestler drinks water standing among spectators as he gets ready for his next match at a local fair in Dharmsala, India, Tuesday, March 29, 2022. These local fairs, once an annual feature, are slowly returning after being cancelled during the COVID-19 pandemic. (Photo by Ashwini Bhatia/AP Photo) 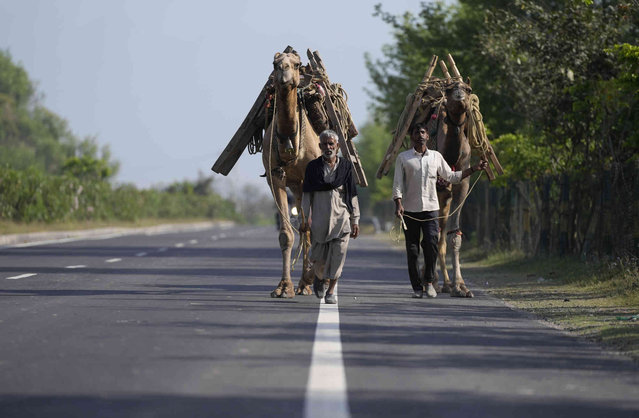 Farmers walk with their camels along the outskirts of Jammu, India, Thursday, March 31, 2022. (Photo by Channi Anand/AP Photo) 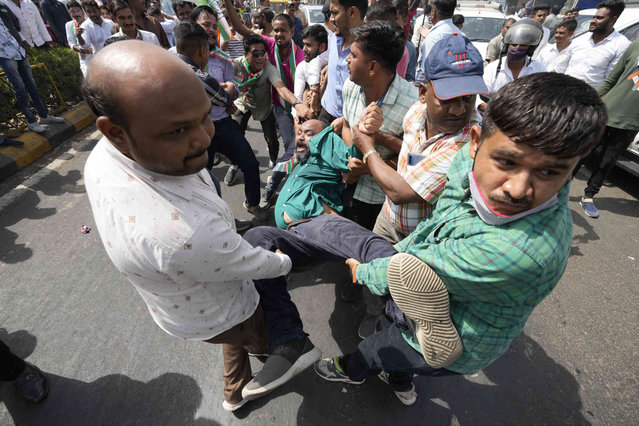 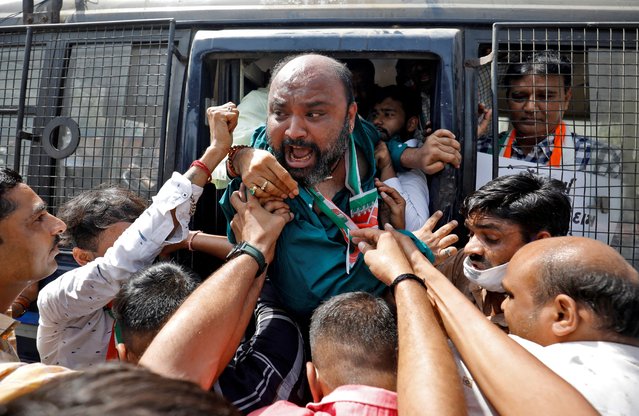 A supporter of India's main opposition Congress party shouts from a police vehicle as he is detained during a protest against the rise in fuel prices, in Ahmedabad, India, April 1, 2022. (Photo by Amit Dave/Reuters) 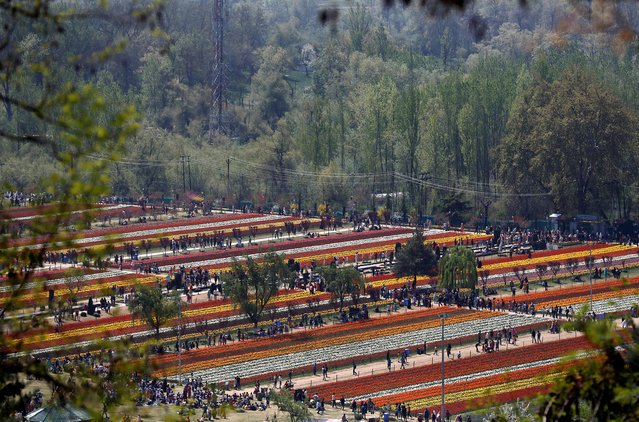 Visitors walk inside Kashmir's tulip garden on the foothills of the Zabarwan mountain range in Srinagar, April 1, 2022. (Photo by Danish Ismail/Reuters) 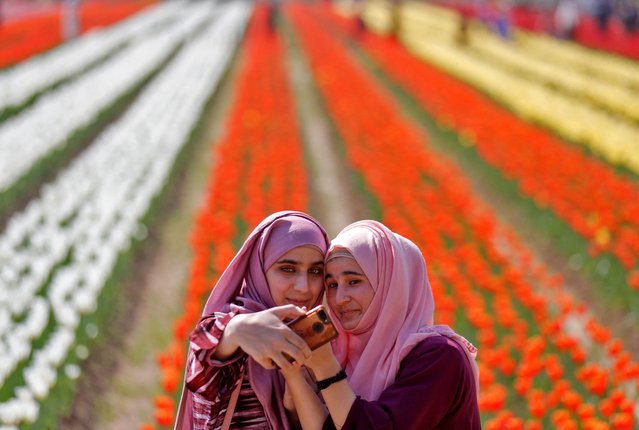 Girls take a selfie inside Kashmir's tulip garden on the foothills of the Zabarwan mountain range in Srinagar, April 1, 2022. (Photo by Danish Ismail/Reuters) 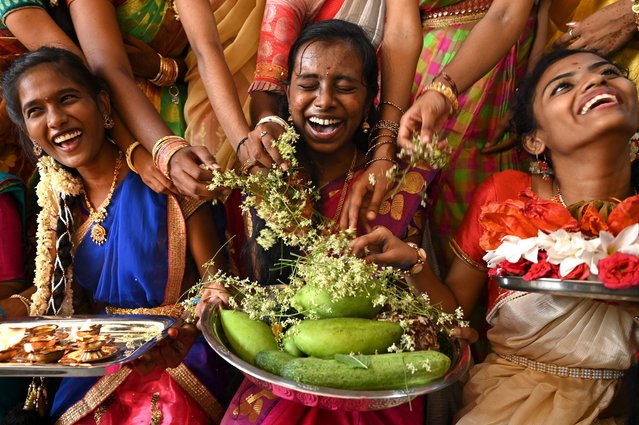 Students wearing traditional costumes celebrate on the eve of “Ugadi” festival, or new year's day as per the Hindu lunisolar calendar, in Chennai on April 1, 2022. (Photo by Arun Sankar/AFP Photo) 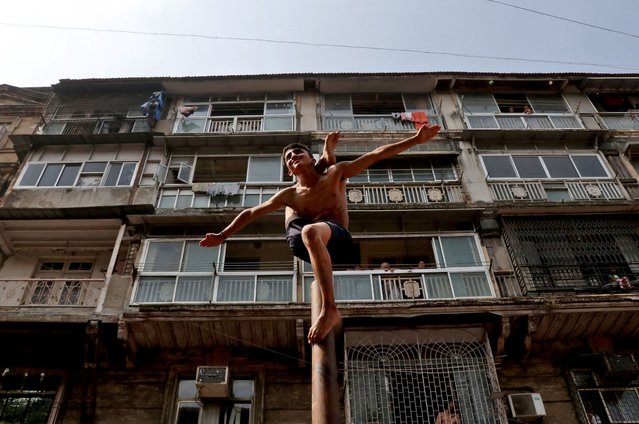 A boy performs “Malkhamb” (traditional Indian gymnastics) during celebrations to mark the Gudi Padwa festival, the beginning of the New Year for Maharashtrians, in Mumbai, India, April 2, 2022. (Photo by Niharika Kulkarni/Reuters) 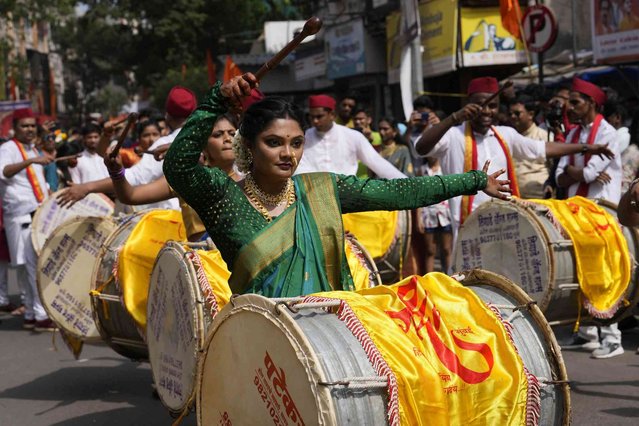 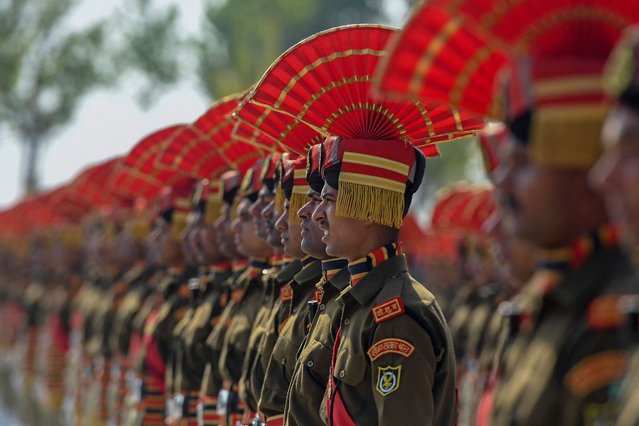 Indian Border Security Force (BSF) new recruits take part in a passing out parade in Humhama on the outskirts of Srinagar on April 4,2022. (Photo by Tauseef Mustafa/AFP Photo) 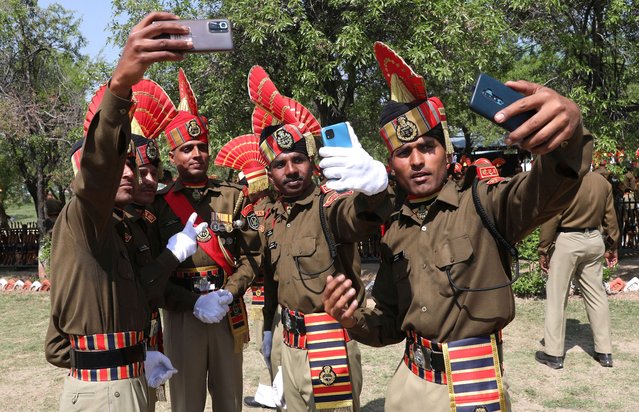 New recruits of the Indian Border Security Force (BSF) take selfie after passing out parade in Humhama, on the outskirts of Srinagar, the summer capital of Indian Kashmir, 04 April 2022. In total 242 recruits were formally inducted into the BSF after completing their training. Now they perform their duty in various parts of India. (Photo by Farooq Khan/EPA/EFE) 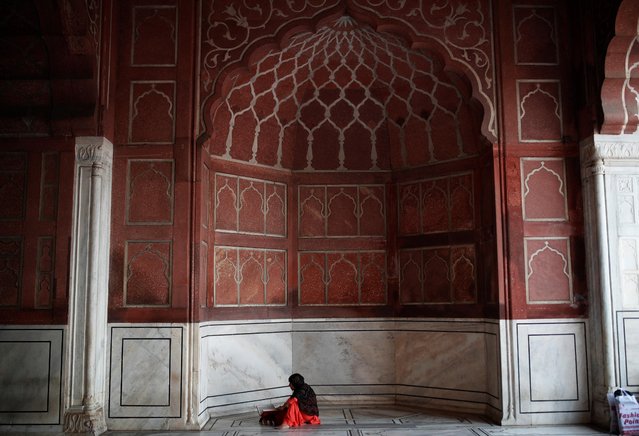 A Muslim woman reads Koran before breaking fast on the second day of holy month of Ramadan at the Jama Masjid (Grand Mosque) in the old quarters of Delhi, India, April 4, 2022. (Photo by Adnan Abidi/Reuters) 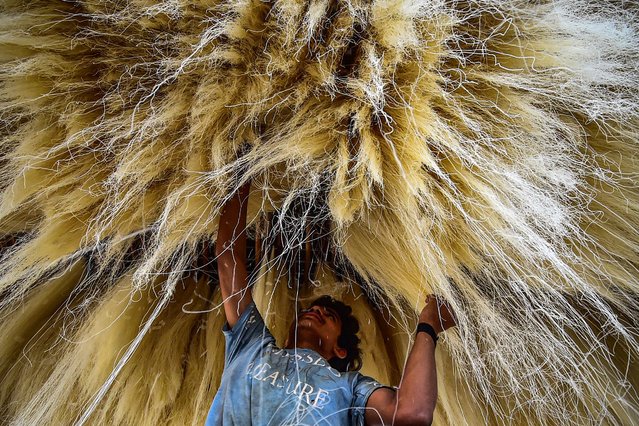 A worker stacks vermicelli which is used in making traditional sweet dishes popularly consumed during the holy month of Ramadan, at a factory in Allahabad on April 5, 2022. (Photo by Sanjay Kanojia/AFP Photo) 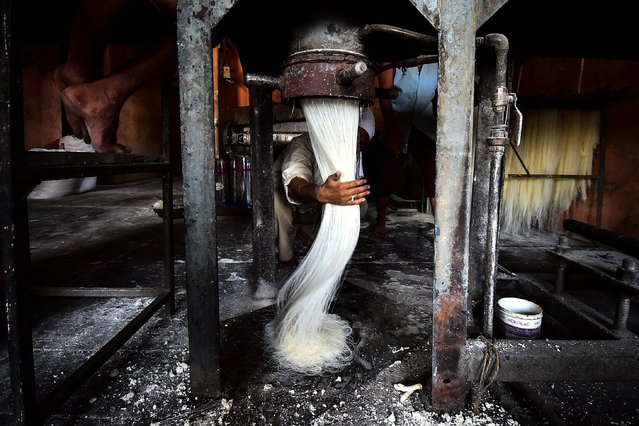 A worker prepares vermicelli which is used in making traditional sweet dishes popularly consumed during the holy month of Ramadan, at a factory in Allahabad on April 5, 2022. (Photo by Sanjay Kanojia/AFP Photo) 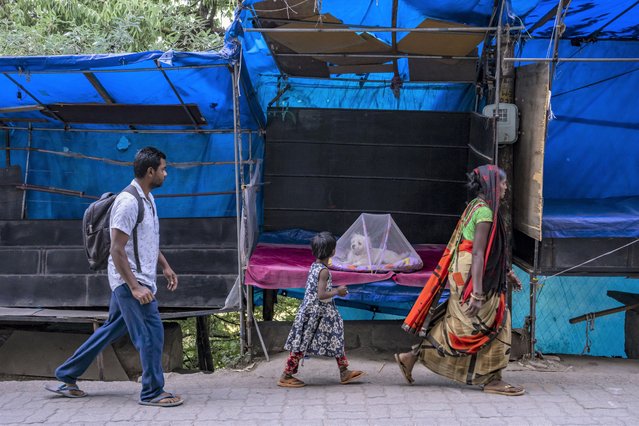 A dog belonging to a roadside shopkeeper is kept under a baby mosquito net as commuters walk past in Dharmsala, India, Tuesday, April 5, 2022. (Photo by Ashwini Bhatia/AP Photo) 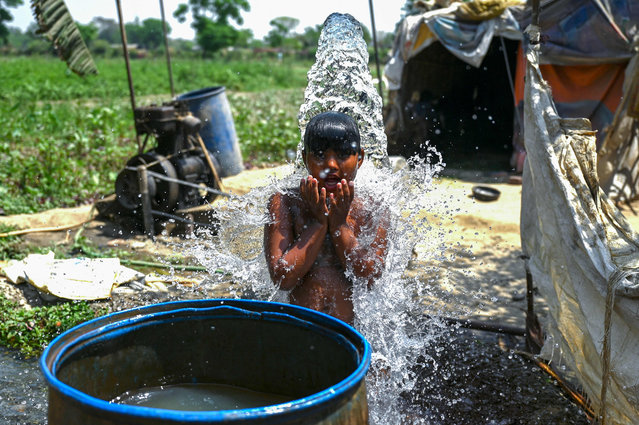 A boy cools himself off at a tubewell near a field amid rising temperatures in New Delhi on April 6, 2022. (Photo by Money Sharma/AFP Photo) 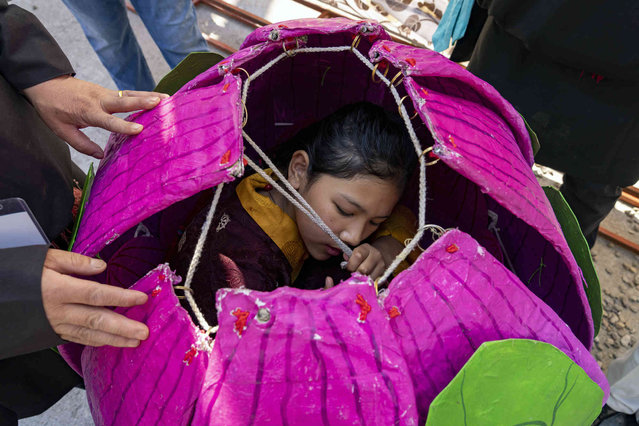 An exile Tibetan girl practices backstage inside a mechanically opening flower during a cultural dance and opera festival called “shoton” at the Tibetan Institute of Performing Arts in Dharmsala, India, Wednesday, April 6, 2022. The one-week festival has its origins in Tibet where people went on a picnic and enjoyed fresh yoghurt during the festival. (Photo by Ashwini Bhatia/AP Photo) 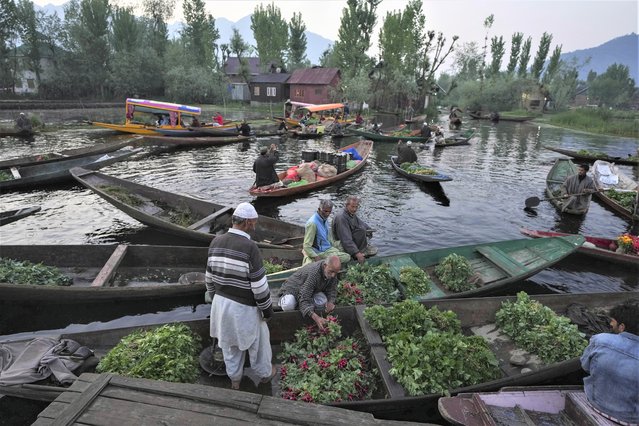 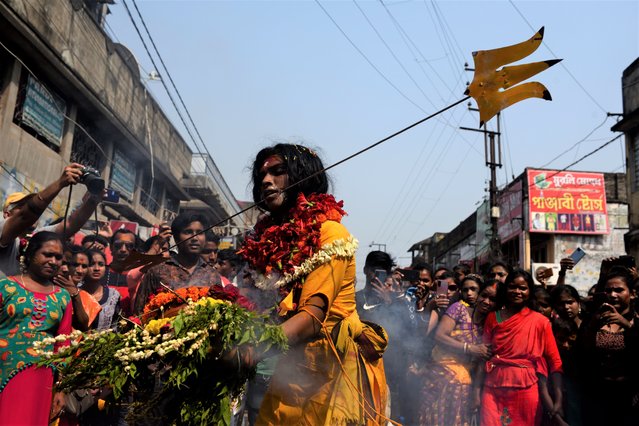 A devotee is seen with their mouth pierced by a vel spear (also known as a divine javelin) during the Vel Vel religious festival in West Bengal, India, on April 6, 2022. The spear is associated with the Hindu war god Murugan. (Photo credit should read Sukhomoy Sen/Eyepix Group/Future Publishing via Getty Images) 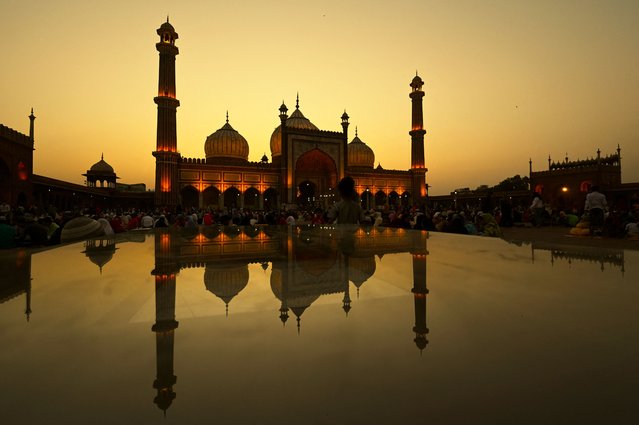 The illuminated Jama Masjid mosque is reflected on the glass of a sundial during the holy fasting month of Ramadan in the old quarters of Delhi on April 7, 2022. (Photo by Money Sharma/AFP Photo)
Edit Del
12 Apr 2022 05:53:00, post received 0 comments
Publication archive:
←   →
Popular tags:
All tags
Last searches: