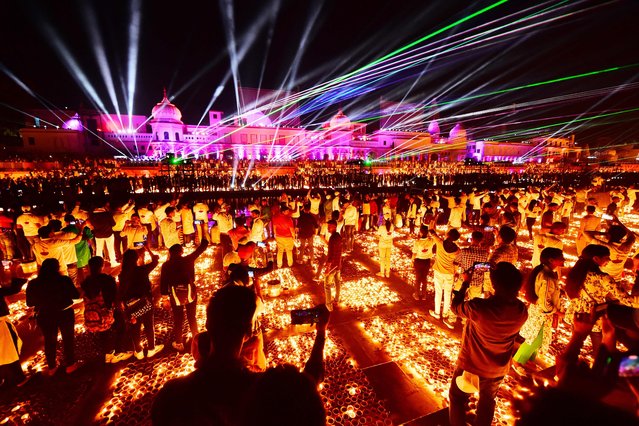 People watch a laser show on the banks of the river Sarayu during Deepotsav celebrations on the eve of the Hindu festival of Diwali in Ayodhya on November 3, 2021. (Photo by Sanjay Kanojia/AFP Photo) 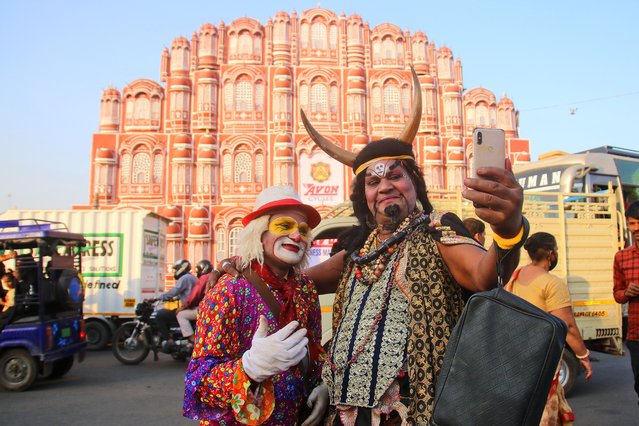 Artists take a selfie in front of the replica of Hawa Mahal, installed in the city on the occasion of Diwali Festival at Choti Chaupar, in Jaipur, Rajasthan, India on Wednesday, November 03, 2021.(Photo by Vishal Bhatnagar/NurPhoto via Getty Images) 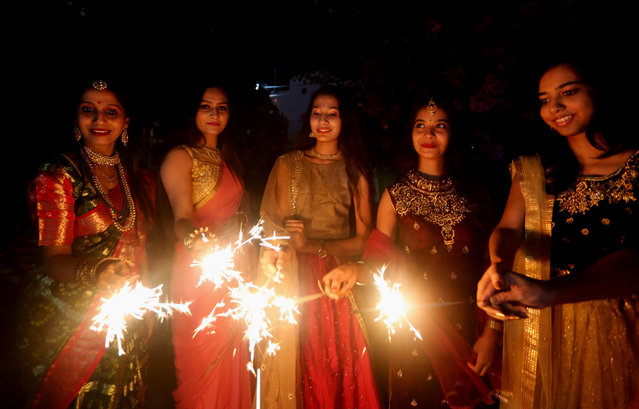 Indian women hold sparklers on the occasion of Diwali, the festival of Lights, in Bhopal, capital of India's Madhya Pradesh, November 3, 2021. The festival of Diwali falls on Nov. 4. (Photo by Xinhua News Agency/Rex Features/Shutterstock) 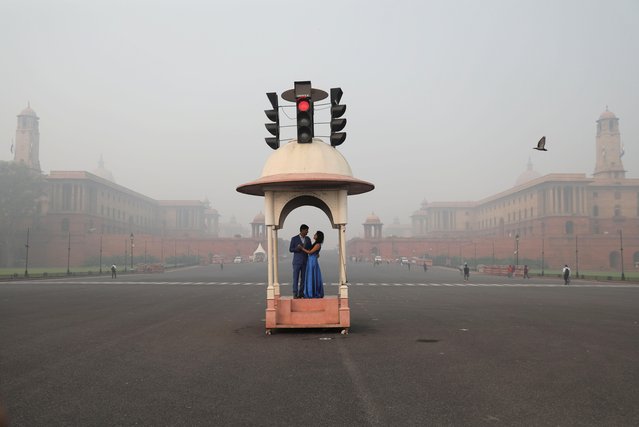 A couple poses during a pre-wedding photo shoot near India's Presidential Palace which is shrouded in smog, in New Delhi, India, November 5, 2021. (Photo by Anushree Fadnavis/Reuters) 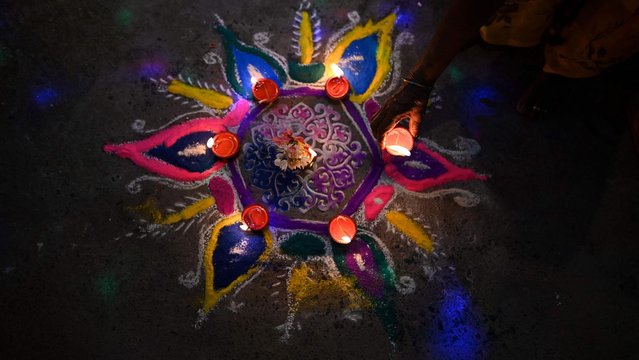 A woman places an oil lamp or “diya” on a rangoli during celebrations for the Hindu festival Diwali or the Festival of Lights in New Delhi on November 4, 2021. (Photo by Sajjad Hussain/AFP Photo) 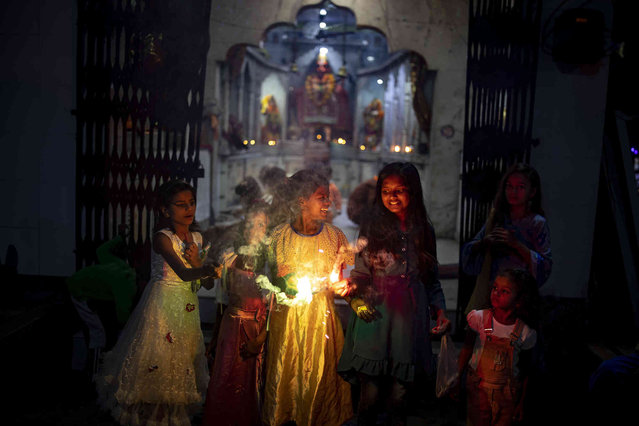 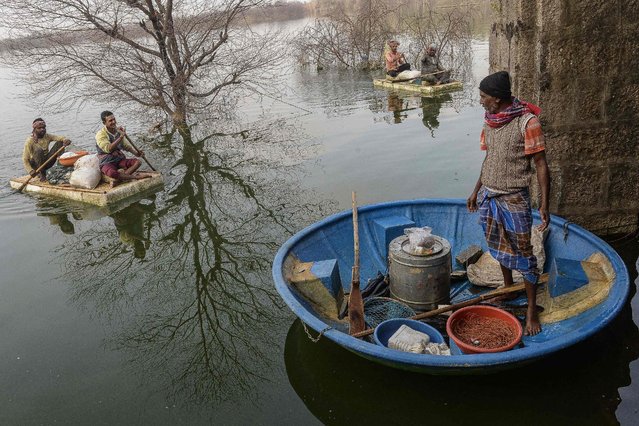 Fishermen return to the shore after catching fish at Turkayamjal lake on the outskirts of Hyderabad, on November 5, 2021. (Photo by Noah Seelam/AFP Photo) 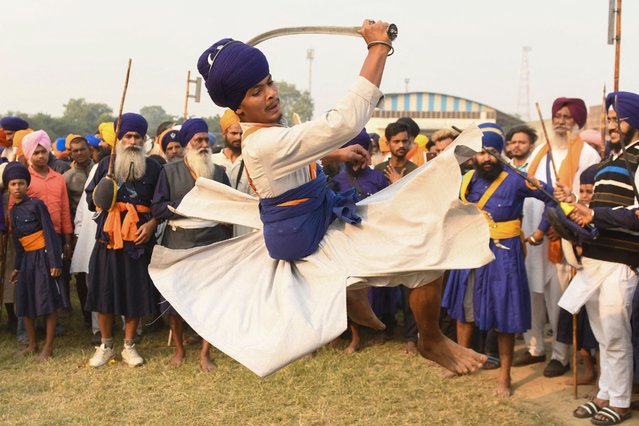 A Nihang' or Sikh warrior performs “Gatka”, an ancient form of Sikh martial arts, during a Fateh Divas celebration a day after the Hindu festival Diwali, in Amritsar on November 5, 2021. (Photo by Narinder Nanu/AFP Photo) 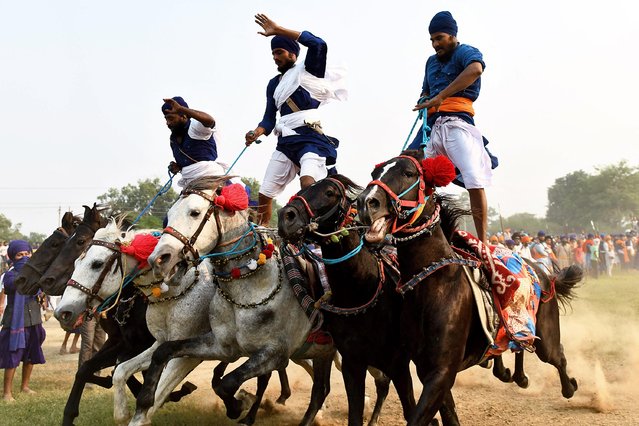 Nihang or Sikh warriors ride horses standing on their backs during a Fateh Divas celebration a day after the Hindu festival Diwali, in Amritsar on November 5, 2021. (Photo by Narinder Nanu/AFP Photo) 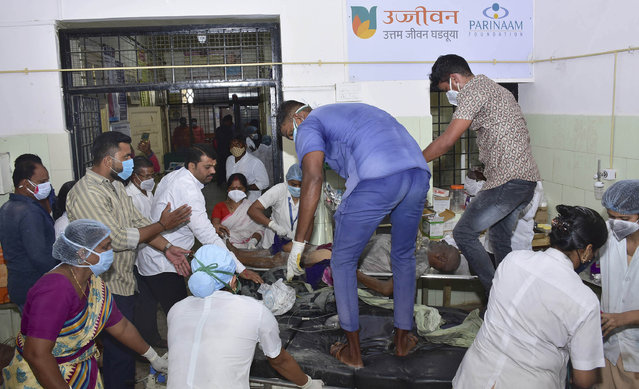 A man is carried for treatment after a fire in a hospital's COVID-19 ward that caught fire in Ahmednagar, in the western Indian state of Maharashtra, Saturday, November 6, 2021. Ten patients died in the fire, officials said. Such incidents are not uncommon in India. In May, when the country was battling a devastating surge in coronavirus cases, a fire in a COVID-19 ward in western India killed at least 18 patients. (Photo by AP Photo/Stringer) 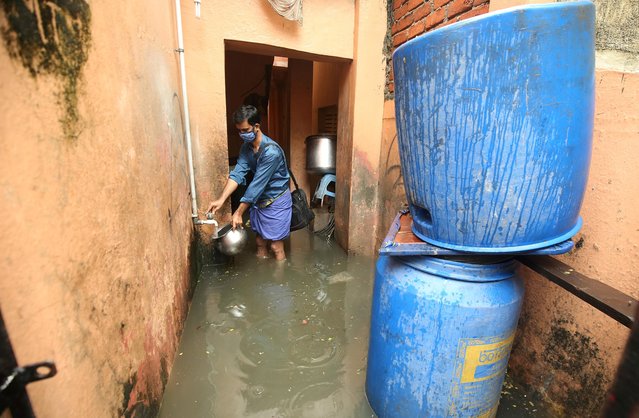 A man collects drinking water from a tap inside his flooded house after heavy rainfall in Chennai, India, November 8, 2021. (Photo by P. Ravikumar/Reuters) 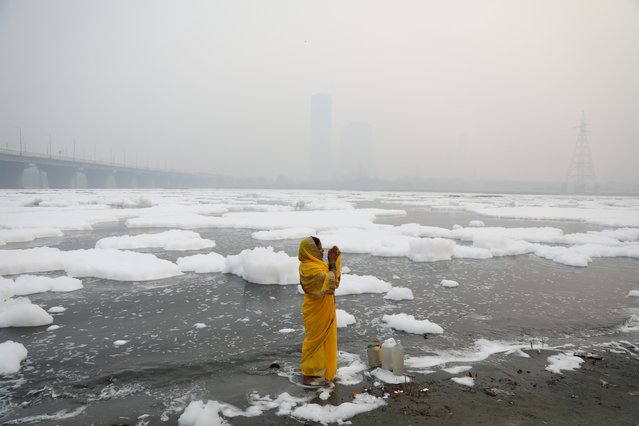 A woman prays on the banks of the river Yamuna on a smoggy morning in New Delhi, November 8, 2021. (Photo by Anushree Fadnavis/Reuters) 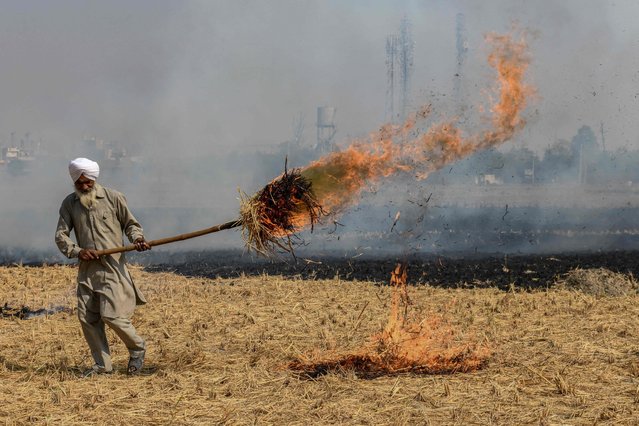 A farmer burns straw stubble after harvesting a paddy crop in a field on the outskirts Amritsar on November 8, 2021. (Photo by Narinder Nanu/AFP Photo) 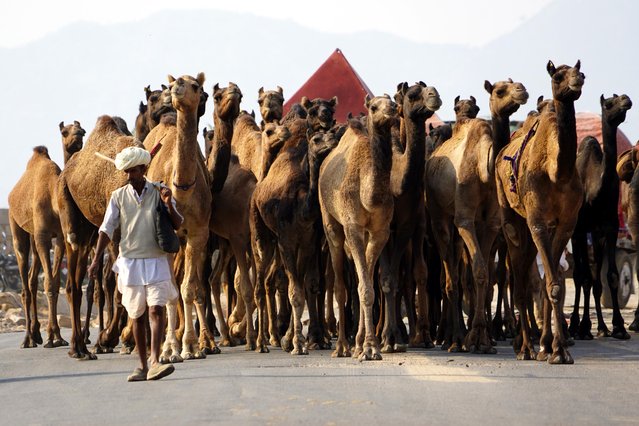 Indian camel traders arrive to attend annual Pushkar Camel Fair in Pushkar, Rajasthan, India on November 6, 2021. Thousands of livestock traders from the region come to the traditional camel fair where livestock, mainly camels, are traded. the annual camel and livestock fair is one of the world's largest camel fairs. (Photo by Himanshu Sharma/Anadolu Agency via Getty Images) 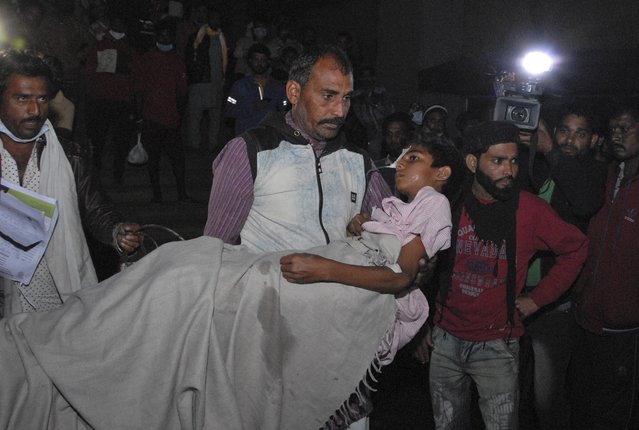 A man carries a child out from the Kamla Nehru Children’s Hospital after a fire in the newborn care unit of the hospital killed four infants, in Bhopal, India, Monday, November 8, 2021. There were 40 children in total in the unit, out of which 36 have been rescued, said Medical Education Minister Vishwas Sarang. (Photo by AP Photo/Stringer) 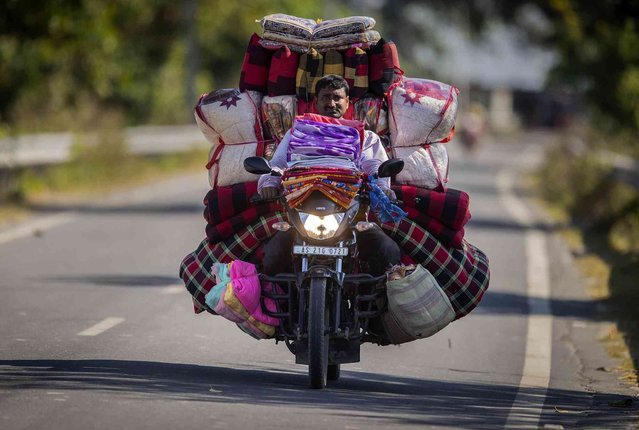 A vendor carries mattresses and cushions for sale on a motorbike in Gauhati, India, Tuesday, November 9, 2021. (Photo by Anupam Nath/AP Photo) 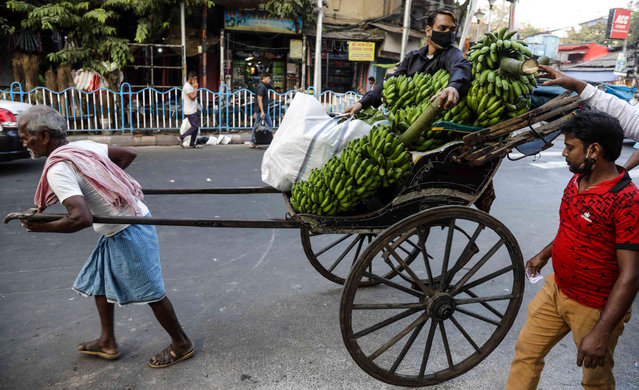 A man sits on a hand-pulled rickshaw carrying bananas and other materials for worship ahead of the Hindu festival of Chhat, in Kolkata, India, Tuesday, November 9, 2021. During Chhath, an ancient Hindu festival popular amongst the working class, rituals are performed to thank the Sun God for sustaining life on earth. (Photo by Bikas Das/AP Photo) 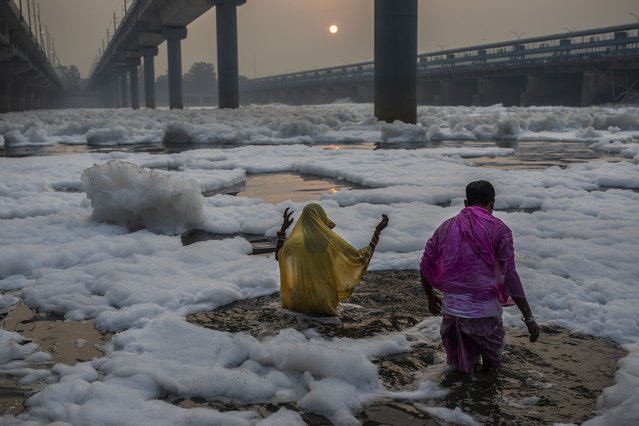 Indian Hindu devotees perform rituals in Yamuna river, covered by chemical foam caused due to industrial and domestic pollution, during Chhath Puja festival in New Delhi, India, Wednesday, November 10, 2021. A vast stretch of one of India's most sacred rivers, the Yamuna, is covered with toxic foam, caused partly by high pollutants discharged from industries ringing the capital New Delhi. Still, hundreds of Hindu devotees Wednesday stood knee-deep in its frothy, toxic waters, sometimes even immersing themselves in the river for a holy dip, to mark the festival of Chhath Puja. (Photo by Altaf Qadri/AP Photo) 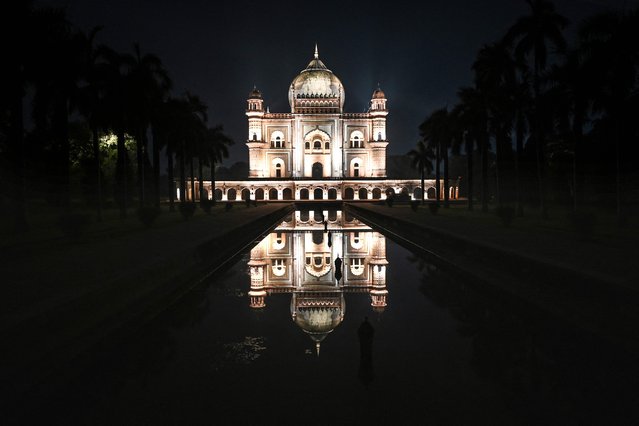