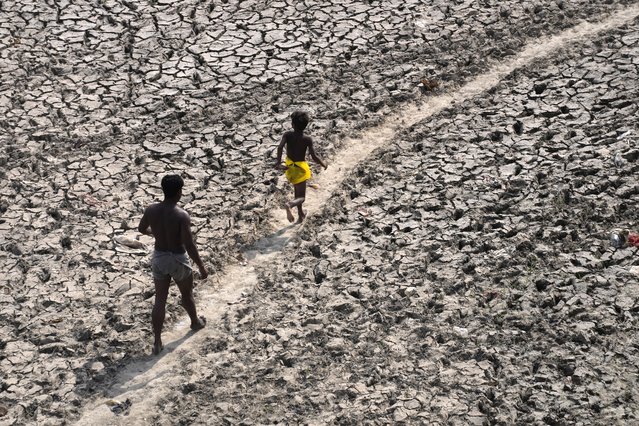 A man and a boy walk across an almost dried up bed of river Yamuna following hot weather in New Delhi, India, Monday, May 2, 2022. An unusually early and brutal heat wave is scorching parts of India, where acute power shortages are affecting millions as demand for electricity surges to record levels. (Photo by Manish Swarup/AP Photo) 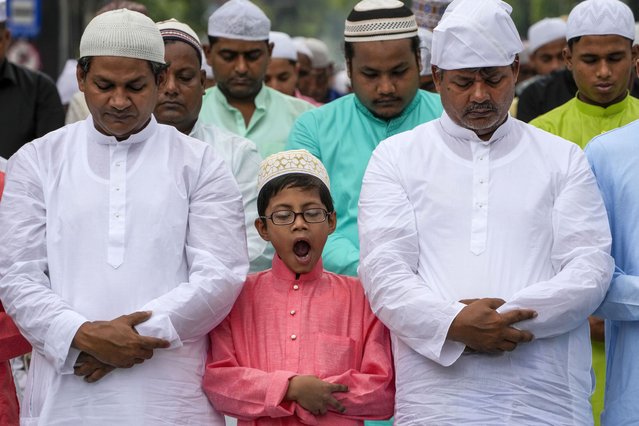 A Muslim boy yawns as he offers prayers with others on Eid al-fitr in Kolkata, India, Tuesday, May 3, 2022. Muslims make 14 percent of India's 1.4 billion population and are the largest minority group in the Hindu-majority nation. (Photo by Bikas Das/AP Photo) 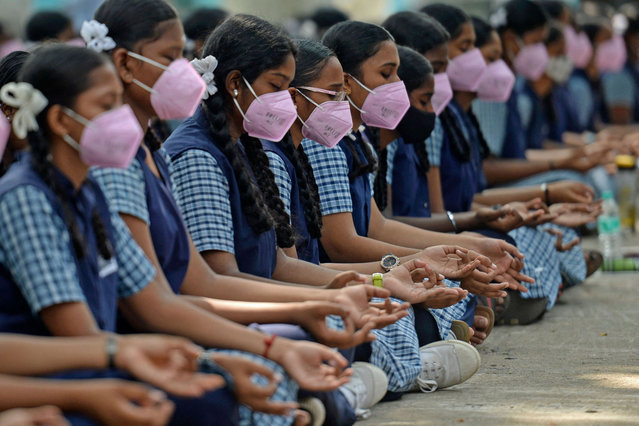 Students meditate before appearing for their 12th standard board examination at a school in Chennai on May 5, 2022. (Photo by Arun Sankar/AFP Photo) 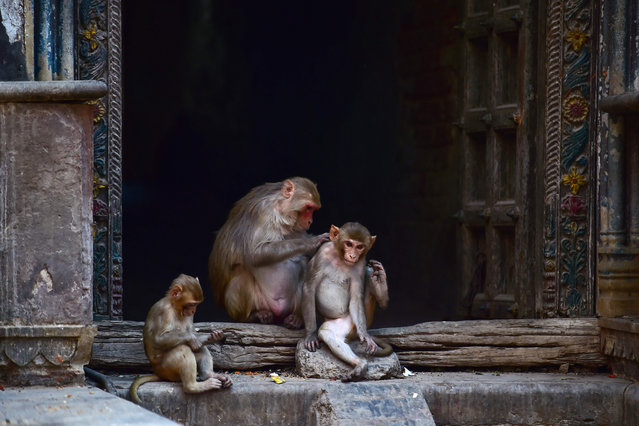 Monkeys sit in shade inside a temple on a hot summer day in Allahabad on May 6, 2022. (Photo by Sanjay Kanojia/AFP Photo) 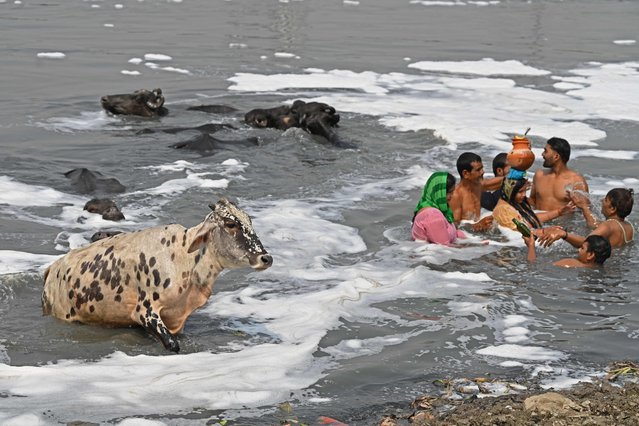 Hindu devotees pray in the polluted waters of river Yamuna laden with foam, on a hot summer day in New Delhi on May 7, 2022. (Photo by Sajjad Hussain/AFP Photo) 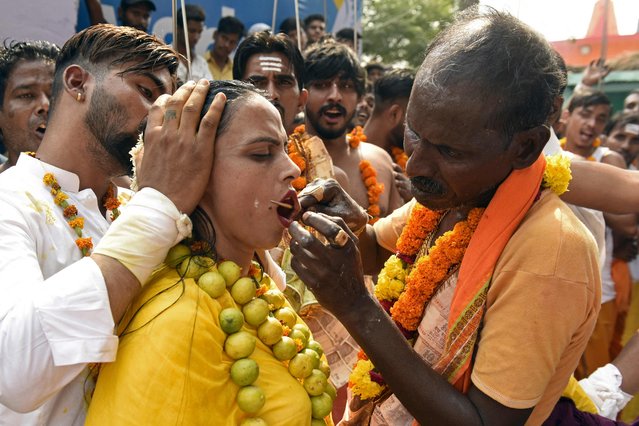 A devotee gets her cheeks pierced with a metal rod by a priest while taking part in a procession to honour the Hindu goddess Mariamman in Amritsar on May 8, 2022. (Photo by Narinder Nanu/AFP Photo) 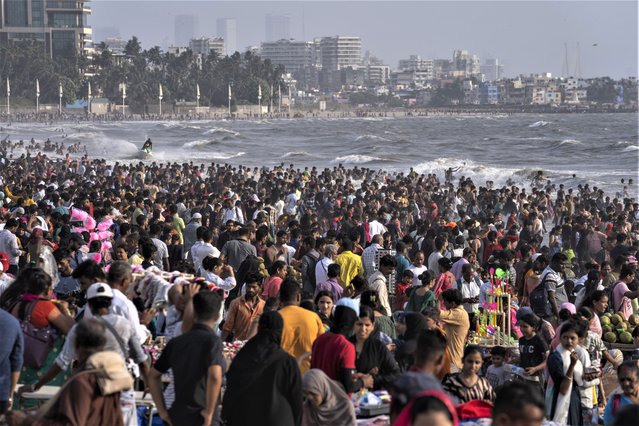 People crowd the Juhu beach on the Arabian Sea coast on a hot and humid day in Mumbai, India, Sunday, May 8, 2022. (Photo by Rafiq Maqbool/AP Photo) 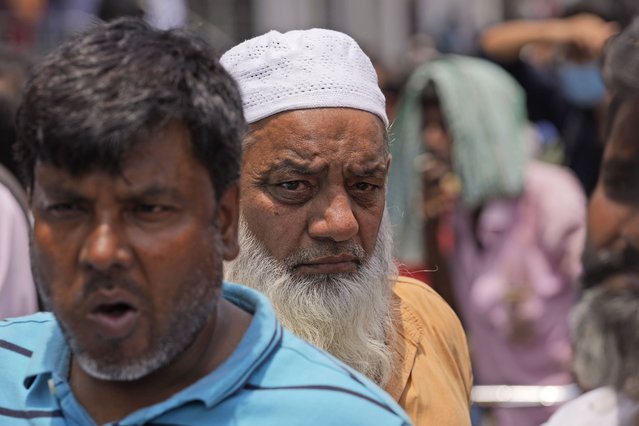 Residents of Shaheen Bagh watch as officials and policemen arrive for a demolition drive in New Delhi, Monday, May 9, 2022. Authorities in New Delhi stopped a demolition drive in a Muslim-dominated neighborhood after hundreds of residents and a number of opposition party workers gathered in protest Monday. No buildings were razed down before the bulldozers retreated. (Photo by Manish Swarup/AP Photo) 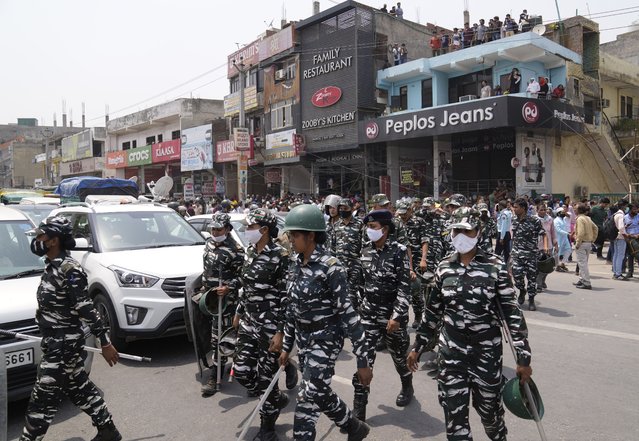 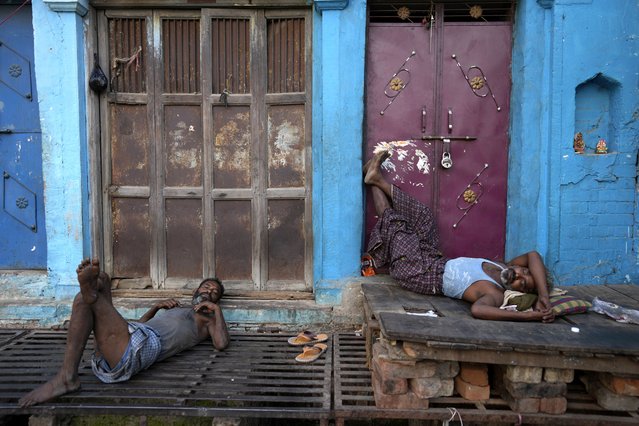 Indian laborers sleep in front of the closed shops in Prayagraj, India, Tuesday, May 10, 2022. A daily wage laborer if hired for a day earns about INR 500 (US$ 7). (Photo by Rajesh Kumar Singh/AP Photo) 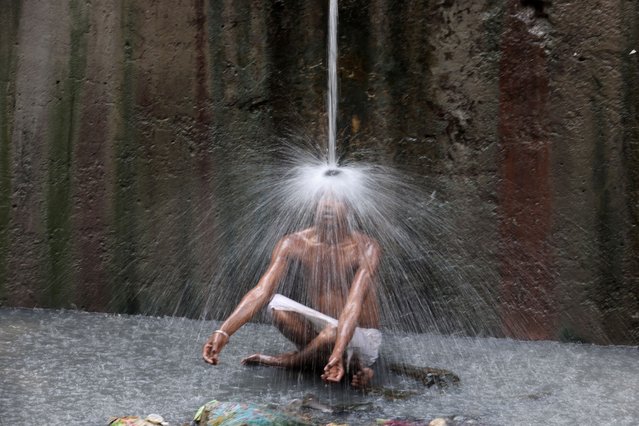 A man cools off under a pipe of flowing water on a hot summer day in New Delhi, India, May 11, 2022. (Photo by Anushree Fadnavis/Reuters) 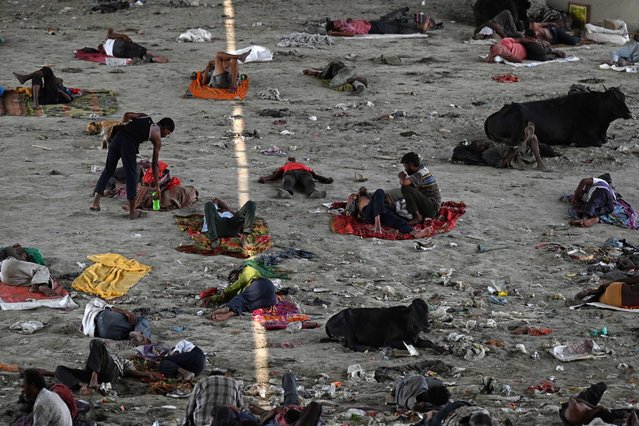 Homeless people take rest under a bridge to get respite from the heat on a hot summer afternoon in New Delhi on May 11, 2022. (Photo by Sajjad Hussain/AFP Photo) 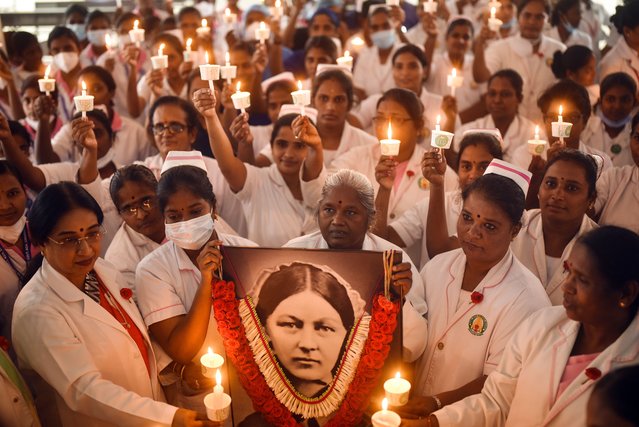 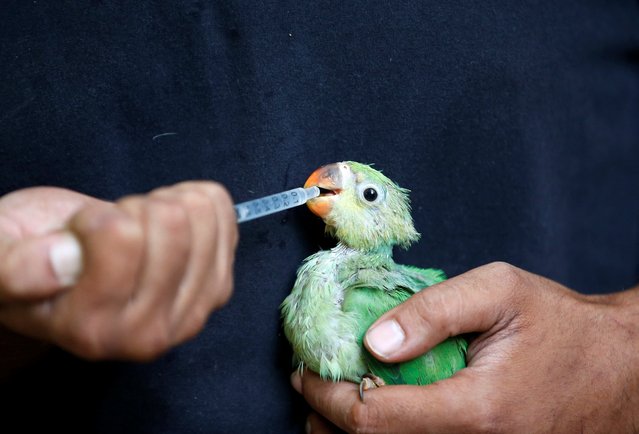 A caretaker feeds water mixed with multivitamins to a parakeet after it was dehydrated due to heat at Jivdaya Charitable Trust, a non-governmental rehabilitation centre for birds and animals, during hot weather in Ahmedabad, India, May 11, 2022. (Photo by Amit Dave/Reuters) 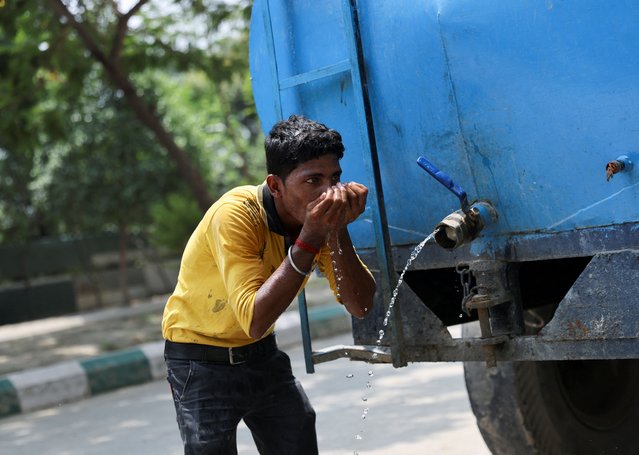 A labourer drinks water from a tanker at a construction site on a hot summer day, in Noida, India, May 12, 2022. (Photo by Anushree Fadnavis/Reuters) 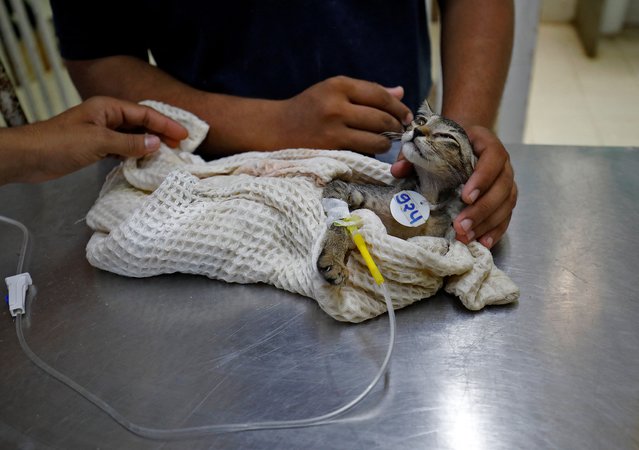 Vets administer saline drip to a cat that is covered by a wet cloth after it was dehydrated due to heat at Jivdaya Charitable Trust, a non-governmental rehabilitation centre for birds and animals, during hot weather in Ahmedabad, India, May 11, 2022. (Photo by Amit Dave/Reuters) 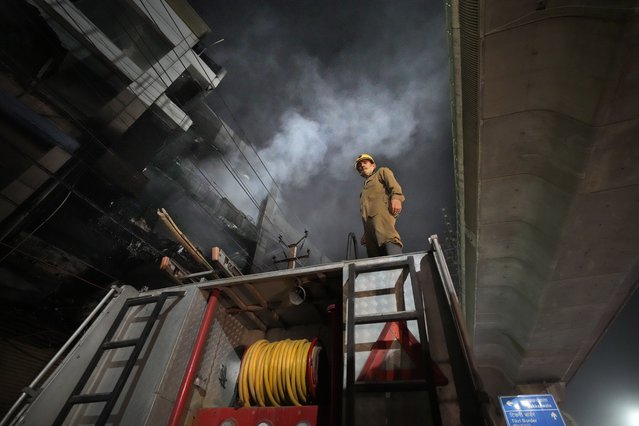 A fire official stands on a fire brigade truck to help his colleagues douse a fire in a four storied building, in New Delhi, India, Saturday, May 14, 2022. A massive fire erupted in a four-storied building in the Indian capital on Friday, killing at least 19 people and leaving several injured, the fire control room said. Dozens of people have been rescued from the commercial building, mainly shops, in the Mundka area in the western part of New Delhi. (Photo by Manish Swarup/AP Photo) 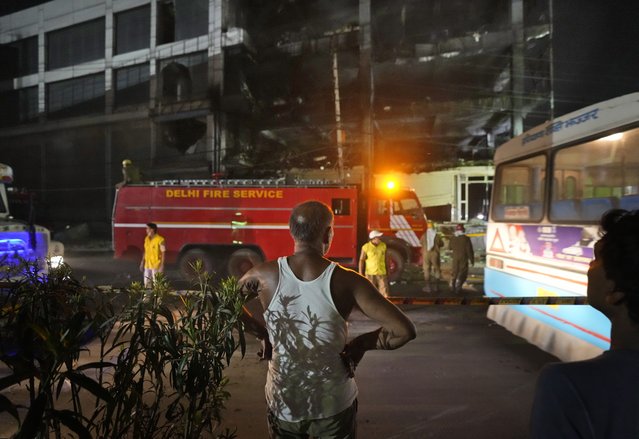 A person watches as fire officials douse a fire in a four storied building, in New Delhi, India, Saturday, May 14, 2022. (Photo by Manish Swarup/AP Photo) 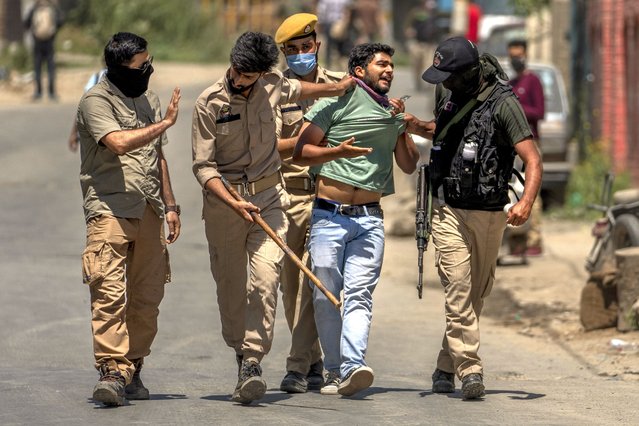 Policemen detain a minority Hindus, locally known as Pandits, during a protest march against the killing of Rahul Bhat, also a Pandit, on the outskirts of Srinagar, Indian controlled Kashmir, Friday, May 13, 2022. Hindus in Indian-controlled Kashmir staged protests on Friday a day after assailants shot and killed the government employee from the minority community. It was the first time that Pandits, an estimated 200,000 of whom fled Kashmir after an anti-India rebellion erupted in 1989, simultaneously organized street protests at several places in the Muslim-majority region. (Photo by Dar Yasin/AP Photo) 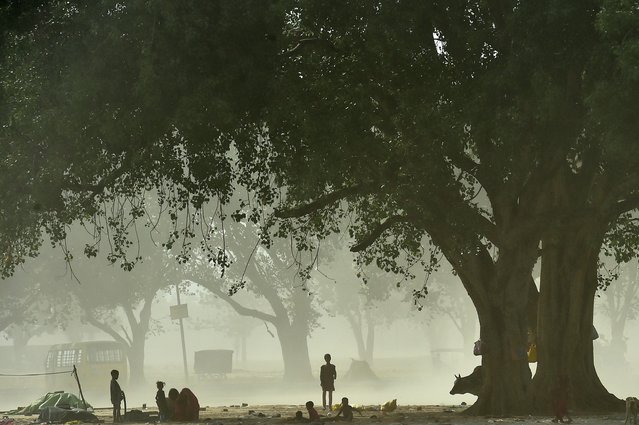 Homeless people rest under a tree on a hot summer afternoon during a duststorm in Allahabad on May 13, 2022. (Photo by Sanjay Kanojia/AFP Photo)
Edit Del
17 May 2022 05:42:00, post received 0 comments
Publication archive:
←   →
Popular tags:
All tags
Last searches: