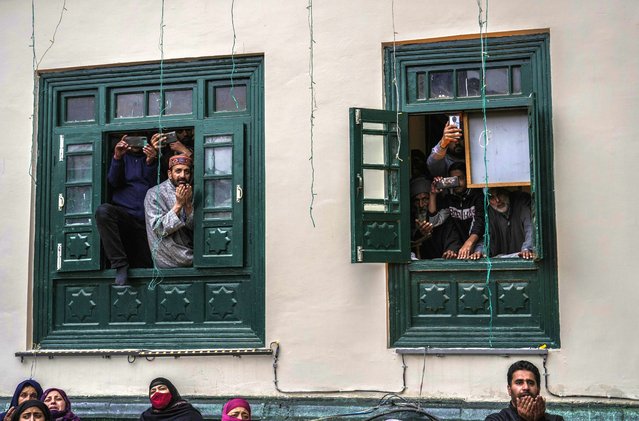 Kashmiri Muslim devotees pray from the windows of a mosque as a priest displays a relic of Sufi saint Sheikh Syed Abdul Qadir Jeelani outside his shrine in Srinagar, Indian controlled Kashmir, Monday, November 7, 2022. Hundreds of devotees have gathered at the shrine for the 11-day festival that marks the death anniversary of the Sufi saint. (Photo by Mukhtar Khan/AP Photo) 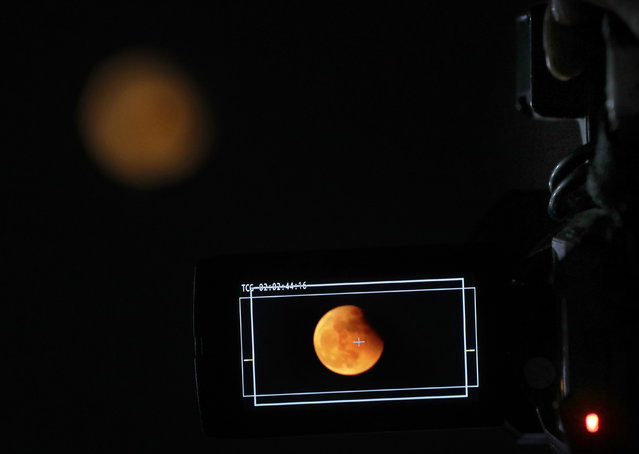 A videographer shoots a Luner full eclipse in Kolkata, India, 08 November 2022. A full moon at its closest distance to the earth with the moon appearing larger than usual. (Photo by Piyal Adhikary/EPA/EFE) 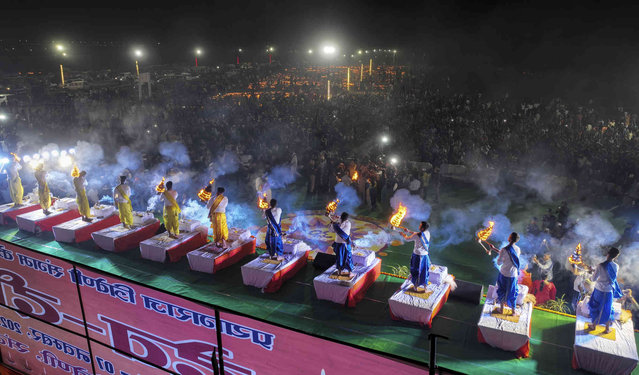 Indian priests perform rituals during a prayer ceremony dedicated to the Ganges River during “Dev Deepawali” festival on the banks of the river in Prayagraj, in the northern state of Uttar Pradesh, India, Monday, November 7, 2022. (Photo by Rajesh Kumar Singh/AP Photo) 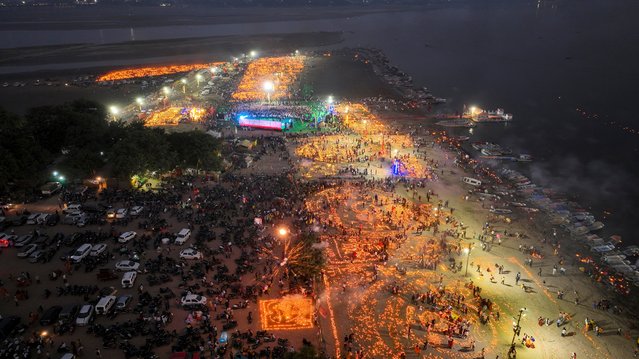 Hindu devotees light lamps during “Dev Deepawali” festival on the banks of the Ganges river in Prayagraj, in the northern state of Uttar Pradesh, India, Monday, November 7, 2022. (Photo by Rajesh Kumar Singh/AP Photo) 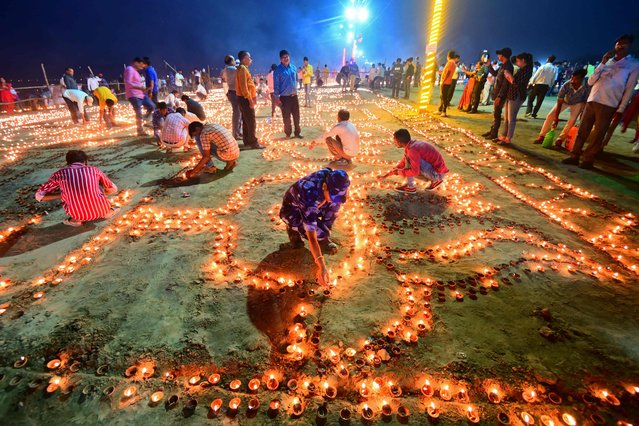 Devotees light traditional oil lamps as they celebrate the Hindu festival of “Dev Deepawali” at Sangam, the confluence of the rivers Ganges, Yamuna and mythical Saraswati in Prayagraj on November 7, 2022. (Photo by Sanjay Kanojia/AFP Photo) Nihangs or Sikh warriors pose for a photo while holding swords ahead of the birthday celebration of Guru Nanak Dev Ji in Mumbai on November 7, 2022. Gatka is a Punjabi word that translates to wooden sticks, which are used instead of swords. it uses a sword as the main weapon, amongst others. person's spiritual and physical aspect is developed during the learning phase of this ancient art. Gatka was extensively used by Sikh warriors to defend themselves from the atrocities of the Mughals and the British rulers. (Photo by Ashish Vaishnav/SOPA Images/Rex Features/Shutterstock) 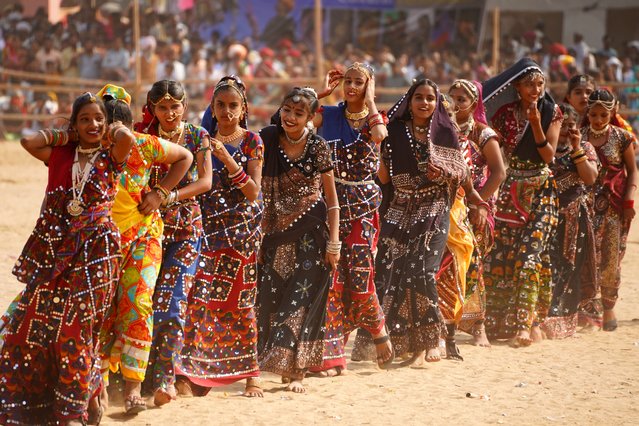 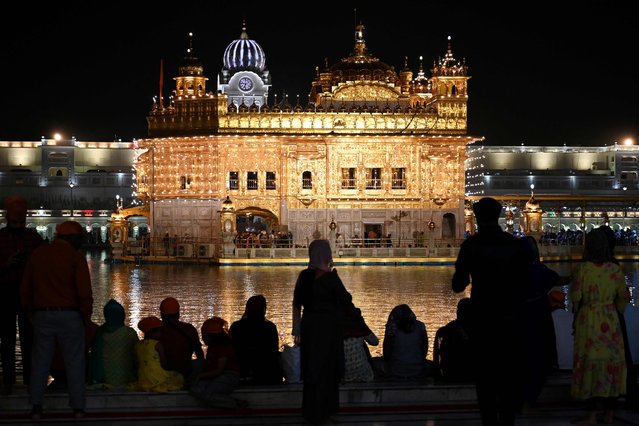 Devotees visit the illuminated Golden Temple on the eve of the birth anniversary of Guru Nanak Dev, the founder of Sikhism, in Amritsar on November 7, 2022. (Photo by Narinder Nanu/AFP Photo) 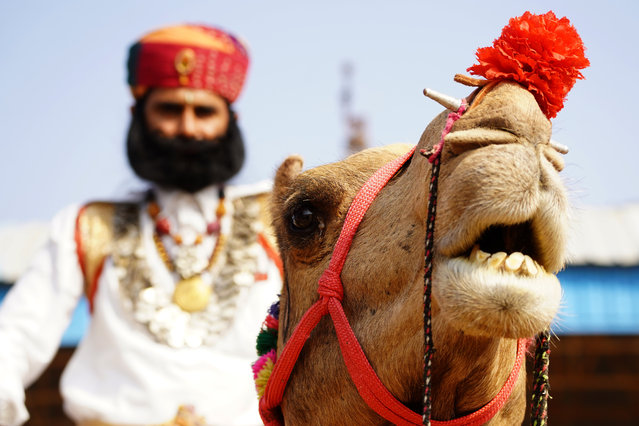 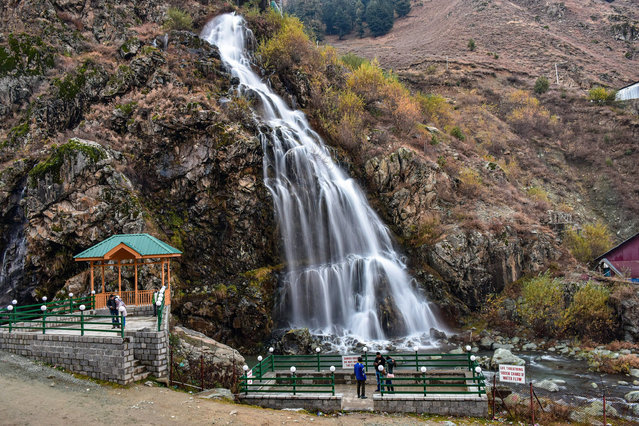 Visitors explore the waterfall during a cold autumn day in Drang about 40kms from Srinagar, the summer capital of Jammu and Kashmir on November 10, 2022. (Photo by Saqib Majeed/SOPA ImagesE/Rex Features/Shutterstock) 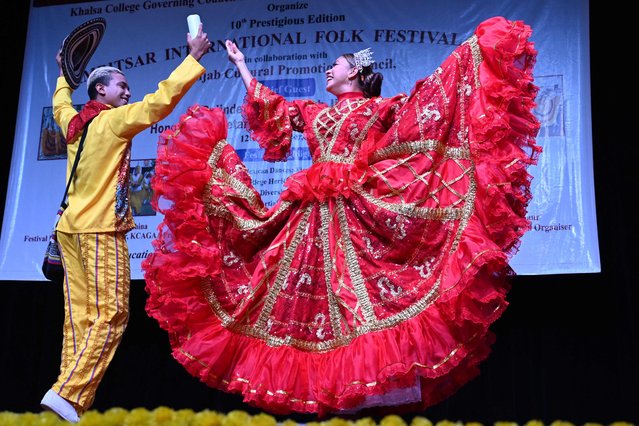 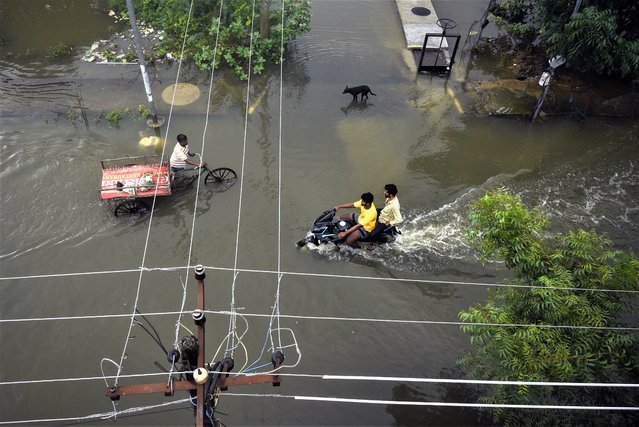 People wade through a flooded residential area following heavy rainfall, in Chennai, India, 12 November 2022. The Indian Meteorological Department (IMD) issued a red alert for four districts in the state of Tamil Nadu on 12 November and predicted heavy to very heavy rainfall in Chennai and other districts in the coming days. Educational institutes continue to shut down in several districts due to heavy downpours. (Photo by Idrees Mohammed/EPA/EFE) 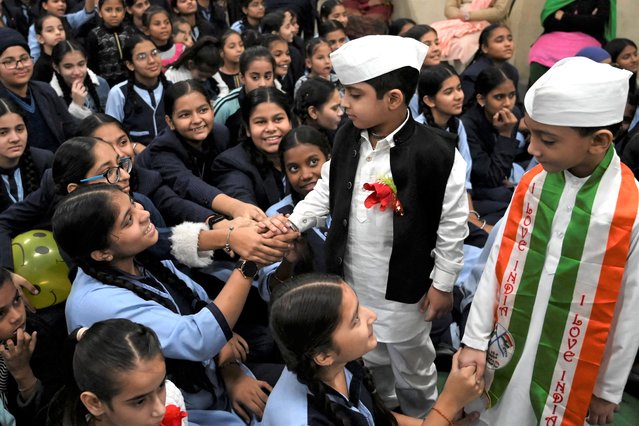 Boys dressed as India's first prime minister Jawaharlal Nehru, gesture during a celebration of Children's day on the occasion of Nehru's 133rd birth anniversary, at a school in Amritsar on November 14, 2022. (Photo by Narinder Nanu/AFP Phoot) 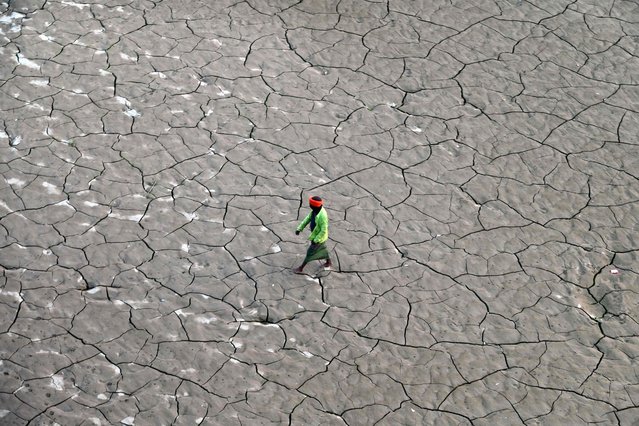 A man walks along a dry river bed on the banks of the river Ganges, in Prayagraj, on November 14, 2022. (Photo by Sanjay Kanojia/AFP Photo) 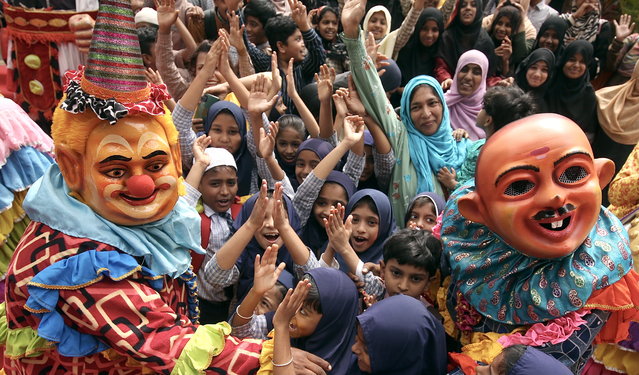 Indian school children participate in a Children's Day program at Bal Bhavan in Bangalore, India, 14 November 2022. Children's day in India is celebrated on 14 November every year to commemorate the birthday of first Prime Minister Jawaharlal Nehru and raise awareness about the rights, education and welfare of children. (Photo by Jagadeesh N.V./EPA/EFE) 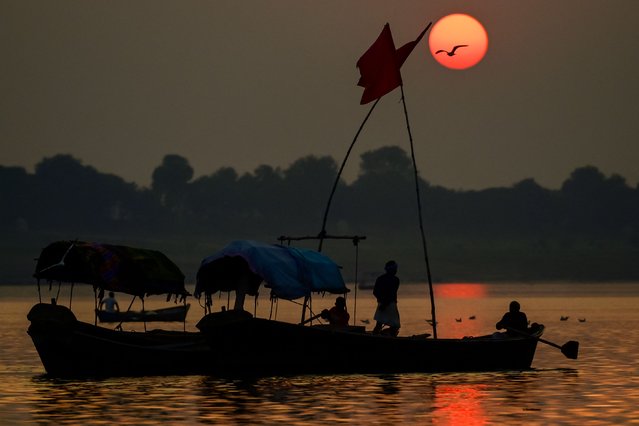 Boatmen are silhouetted against the setting sun at Sangam, the confluence of the rivers Ganges, Yamuna, and mythical Saraswati, in Prayagraj on November 16, 2022. (Photo by Sanjay Kanojia/AFP Photo) 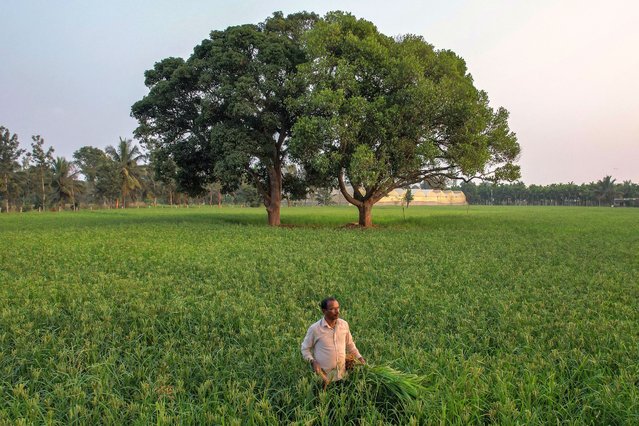 A farmer tends to a crop of finger millet growing in a field, on the outskirts of Bengaluru on November 16, 2022. (Photo by Manjunath Kiran/AFP Photo) 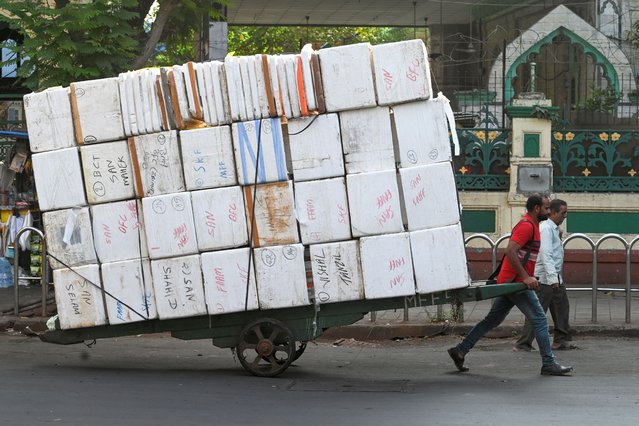 A man pulls a handcart loaded with polystyrene boxes to load fish from a market in Mumbai on November 16, 2022 (Photo by Indranil Mukherjee/AFP Photo) 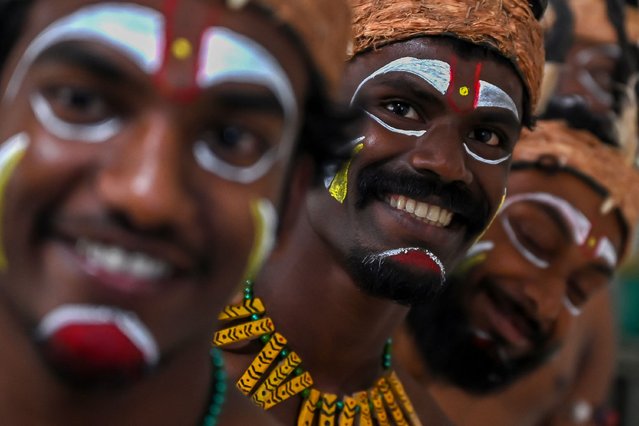 Tribals of Velliankani paramparas community gesture during an event in Chennai on November 17, 2022. (Photo by Arun Sankar/AFP Photo) 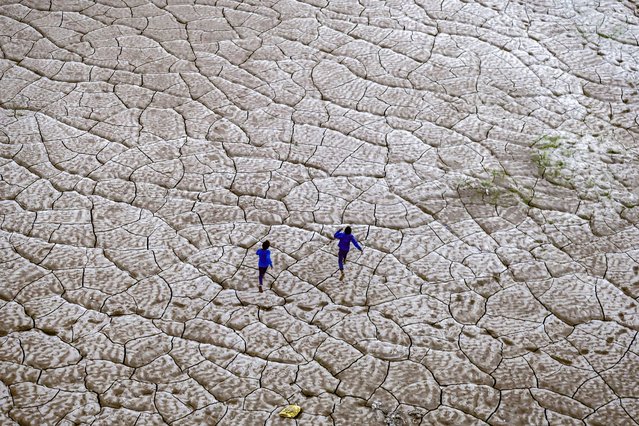