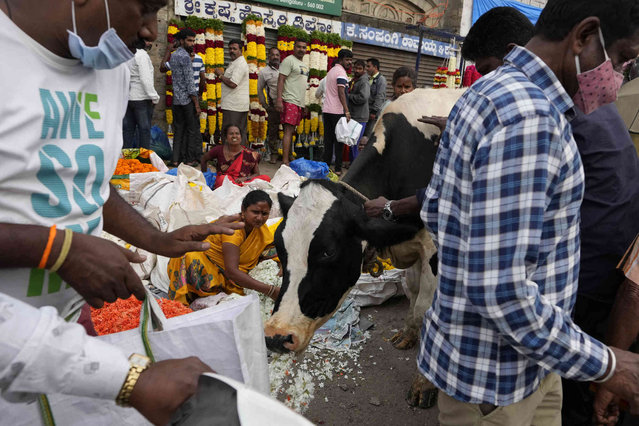 People react as a cow takes away a bunch of flowers from a vendor at a wholesale market in Bengaluru, India, Wednesday, April 13, 2022. People have resumed normal activities after authorities lifted COVID-19 restrictions including wearing of face masks in public places. (Photo by Aijaz Rahi/AP Photo) 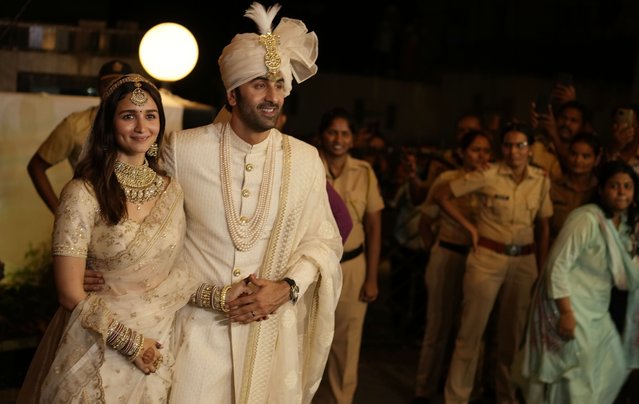 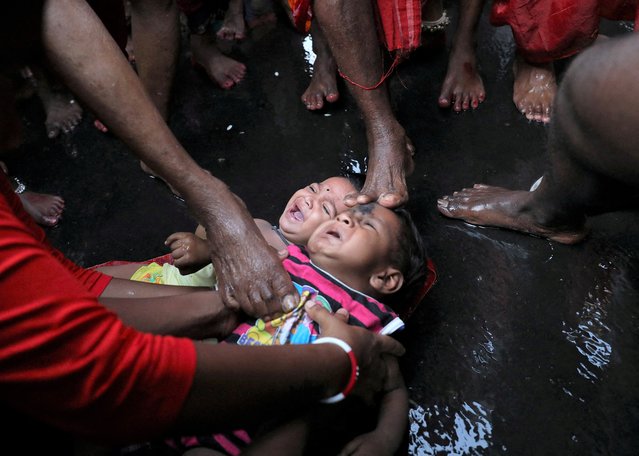 Hindu devotees touch infants with their feet as part of a ritual to bless them during a religious procession held to mark the Gajan festival in Kolkata, India, April 13, 2022. (Photo by Rupak De Chowdhuri/Reuters) 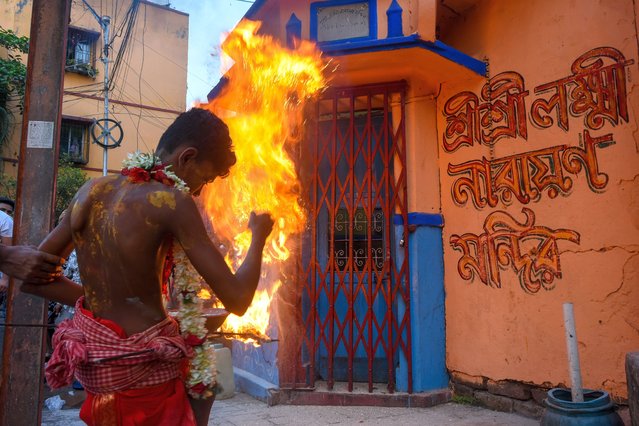 Devotees are seen throwing fire from a cauldron as part of prayer offering ritual during Gajon celebration in Kolkata, West Bengal on April 13, 2022. Gajon is a Hindu festival celebrated on the last day of Bengali month of Chaitra and is observed in Honor of Lord Shiva. (Photo by Debarchan Chatterjee/ZUMA Press Wire/Rex Features/Shutterstock) 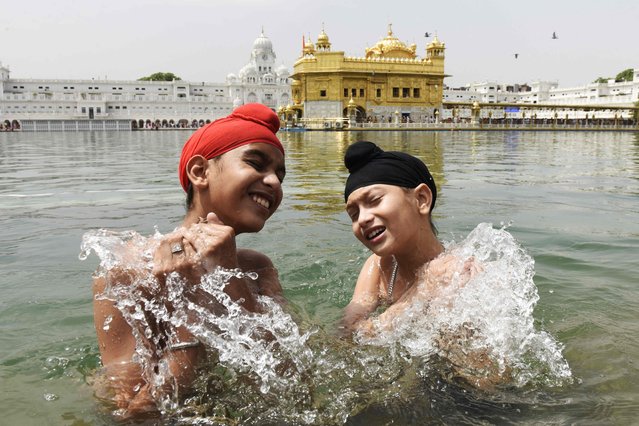 Sikh devotees take a bath in the sacred pond on the occasion of “Baisakhi”, a spring harvest festival for Sikhs and Hindus, at the Golden Temple in Amritsar on April 14, 2022. (Photo by Narinder Nanu/AFP Photo) 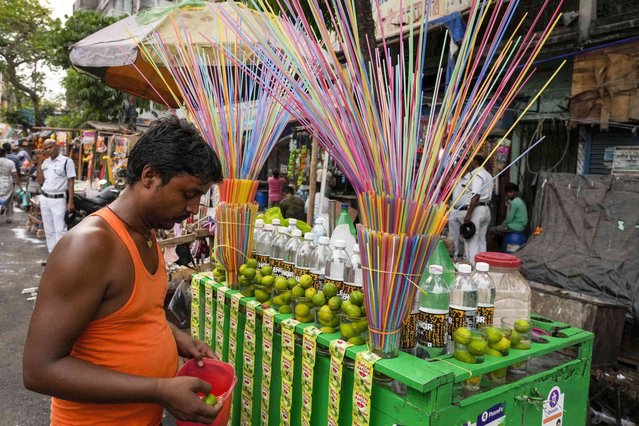 A lemon water seller arranges his cart at a roadside in Kolkata, India, Thursday, April 14, 2022. (Photo by Bikas Das/AP Photo) 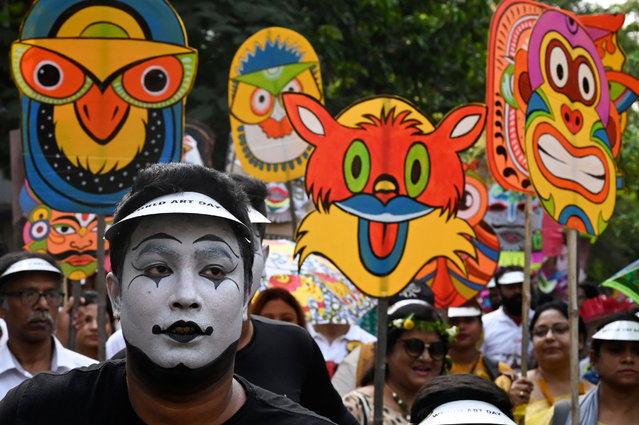 Artists and art lovers march along a street during a rally marking World Art Day in Kolkata on April 15, 2022. (Photo by Dibyangshu Sarkar/AFP Photo) 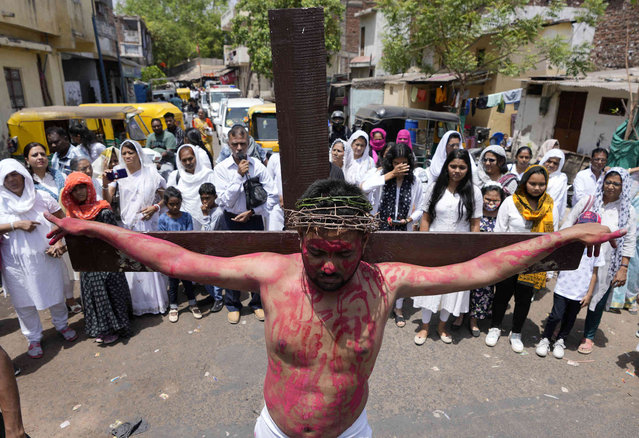 A man reenacts the crucifixion of Jesus Christ to mark Good Friday in Ahmedabad, India, Friday, April 15, 2022. Christians all over the world attend mock crucifixions and passion plays that mark the day Jesus was crucified, known to Christians as Good Friday. (Photo by Ajit Solanki/AP Photo) 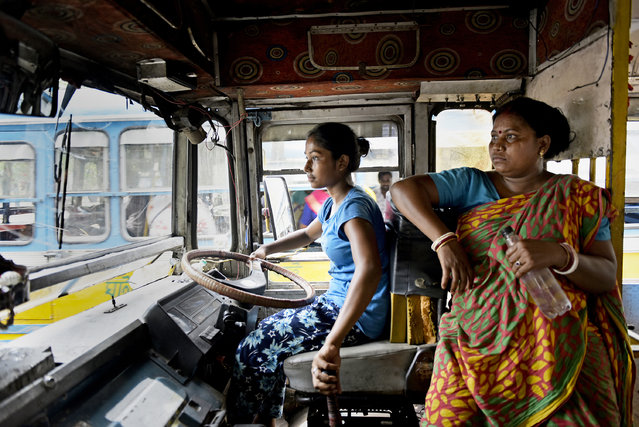 A teenage girl, Kalpana Mondal, age 19, drives a private route bus in Kolkata, West Bengal on April 15, 2022. She took the responsibility after her father had an accident while driving the bus four years ago. (Photo by Indranil Aditya/ZUMA Press Wire/Rex Features/Shutterstock) 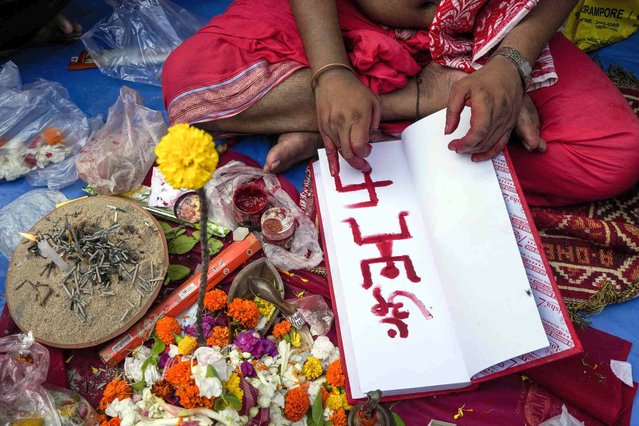 A Hindu priest marks a trader's account book with holy symbols on Bengali New Year's day in Kolkata, India, Friday, April 15, 2022. Traders in West Bengal open their new account books for the year on Bengali New Year after offering prayers to Lakshmi and Ganesha to bring them prosperity. (Photo by Bikas Das/AP Photo) 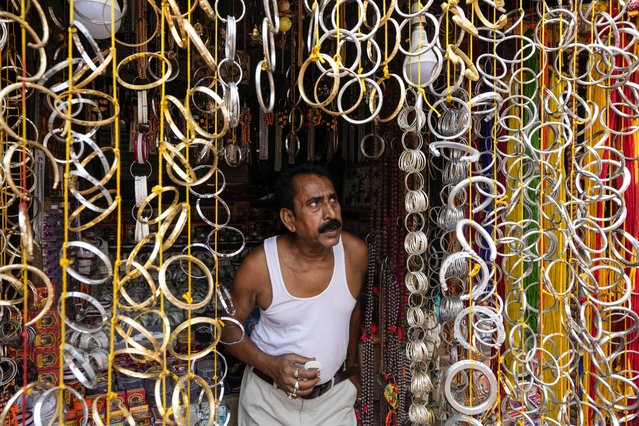 A shopkeeper waits for customers for bangles on sale at his shop on Bengali New Year's day in Kolkata, India, Friday, April 15, 2022. Traders in West Bengal open their new account books for the year on Bengali New Year after offering prayers to Lakshmi and Ganesha to bring them prosperity. (Photo by Bikas Das/AP Photo) 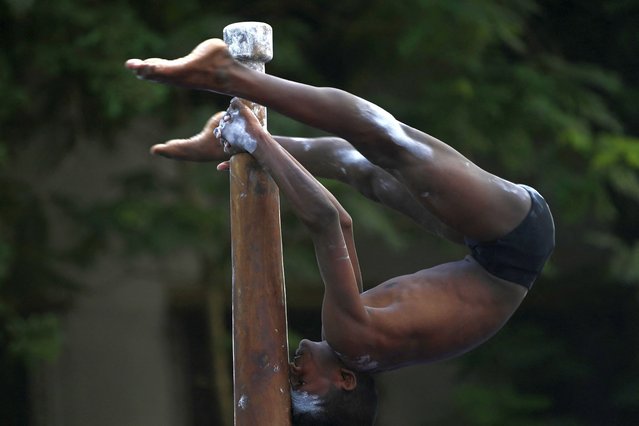 A gymnast takes part in a Mallakhamb competition in Mumbai on April 17, 2022. (Photo by Indranil Mukherjee/AFP Photo) 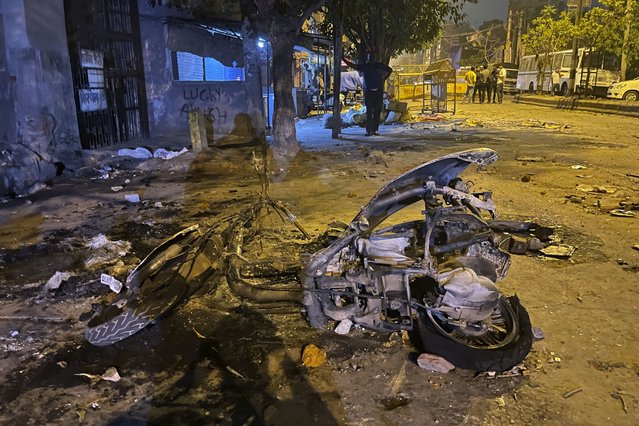 Burnt remains of a motorcycle lie in a street after communal violence in New Delhi, India, Sunday, April 17, 2022. Police in India's capital have arrested 14 people after communal violence broke out during a Hindu religious procession, leaving several injured. The suspects were arrested on charges of rioting and criminal conspiracy, among others, according to local media reports Sunday. (Photo by Arbab Ali/AP Photo) 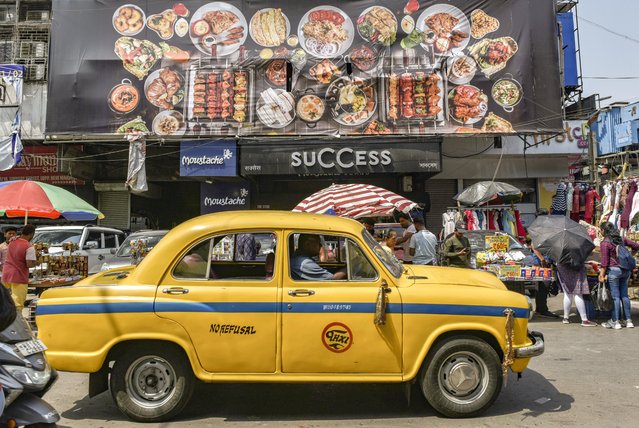 A yellow ambassador taxi passes by a bill board of variety of foods of an upcoming restaurant branch in Kolkata, India, 17 April, 2022. (Photo by Indranil Aditya/NurPhoto via Getty Images) 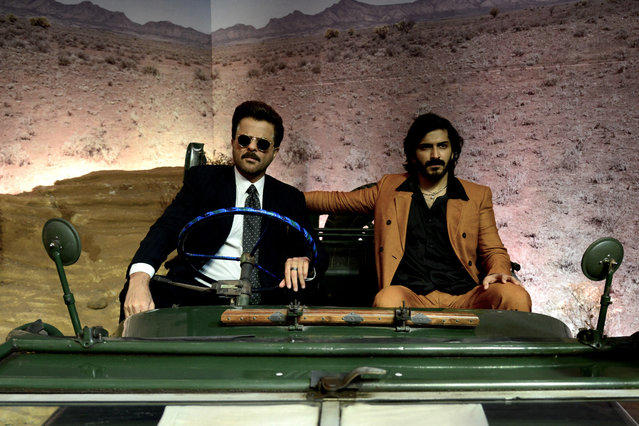 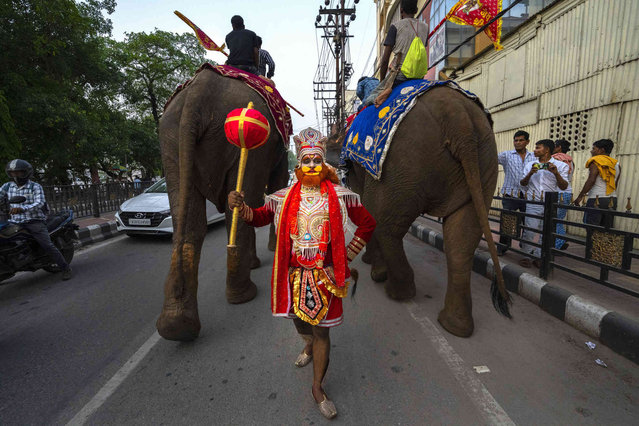 A man dressed as hanuman walks in a religious procession to mark Hanuman Jayanti, a day that celebrates the birth of the monkey-god, in Gauhati, India, Saturday, April 16, 2022. Hanuman is one of the most popular gods in the crowded pantheon of Hindu deities, and devout Hindus ascribe great strength and valor to him. (Photo by Anupam Nath/AP Photo) 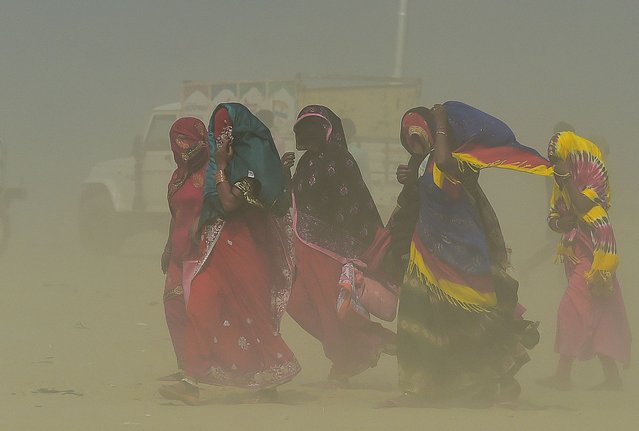 People walk through a sand storm at the Sangam, the confluence of the rivers Ganges, Yamuna and mythical Saraswati in Allahabad on April 19, 2022. (Photo by Sanjay Kanojia/AFP Photo) 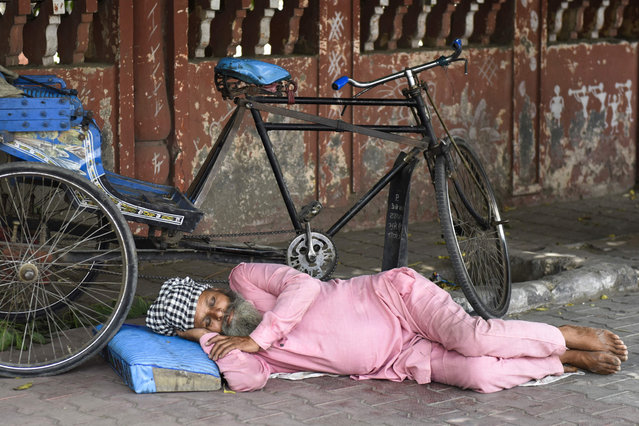 A cycle-rickshaw puller takes a nap during a hot afternoon along a street in Amritsar on April 19, 2022. (Photo by Narinder Nanu/AFP Photo) 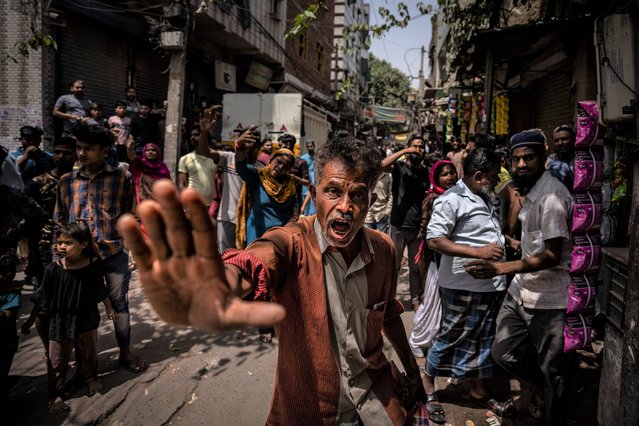 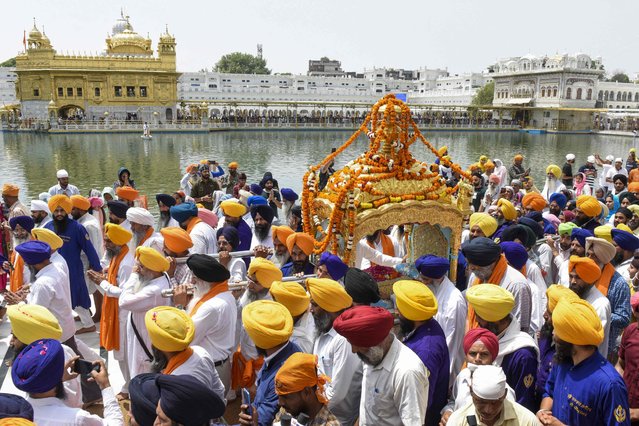