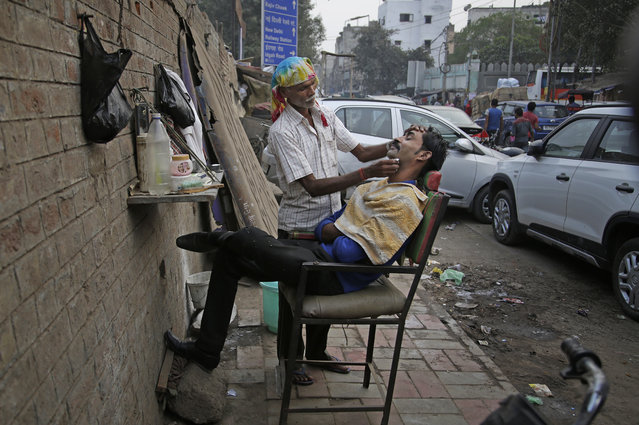 In this November 15, 2017, photo, Dinesh, 55, who has been working for the last 20 years as a roadside barber attends to a customer in New Delhi, India. Dinesh, who uses only one name, sets up a mirror and chair on the sidewalk and typically earns about 100 rupees ($1.50) a day cutting men’s hair and shaving them. He said he often thinks about returning to his family farm in the northeastern state of Bihar.“I’m a poor man who is doing my work”, he said. “I have to feed my kids”. He said if he had any spare money he would think about buying a pollution mask. What he does earn, he said, he spends on basics like salt and chapatti, a type of Indian bread. “I’m old now. I will go to my home and do some farming, plow my field”, he said. “What else can I do?”. (Photo by Altaf Qadri/AP Photo) 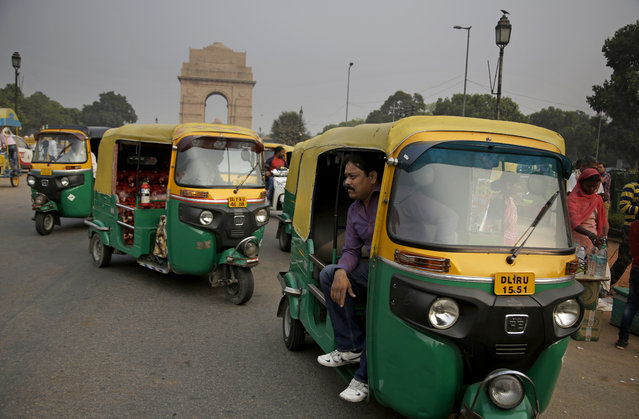 In this November 16, 2017, photo, Sarwan Singh, an auto-rickshaw driver waits for passengers near the India Gate monument, in New Delhi, India. Singh has been ferrying passengers in his three-wheeled motorized rickshaw for 20 years, working 10 to 12 hour days. He said he thinks pollution is a problem for New Delhi but not for him personally because of his health regimen. “I exercise every day for one hour”, he said. “That’s why I’m strong”. Singh said he goes for walks in the park, does yoga, drinks a lot of water and avoids oily foods. Still, he said, when the pollution gets bad, he encourages the rest of his family to stay indoors with the windows shut. “My family is good because all the time they are at home and they don’t come outside”, he said. (Photo by Altaf Qadri/AP Photo) 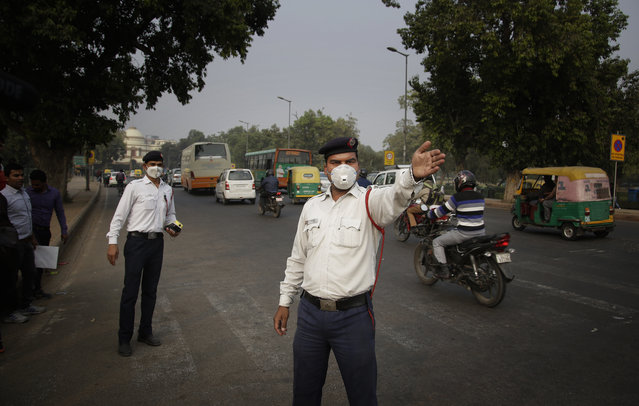 In this November 16, 2017, photo, Ram Sharan, 28, right, a traffic police officer manages traffic in New Delhi, India. Sharan has spent the last three years working eight-hour shifts amid the capital’s chaotic traffic. He said the Delhi police force has issued him and other officers with pollution masks.“We face a lot of difficulties and problems. Our bodies get weak and we lose our immunity”, he said. “But duty is duty. I have to do it”. Sharan said he feels like the public is not focusing on the problem. “We live in nature but we don’t support it”, he said. “Take cars. One house has four cars and all four people use different cars. Something should be done so they all leave in one car”. (Photo by Altaf Qadri/AP Photo) 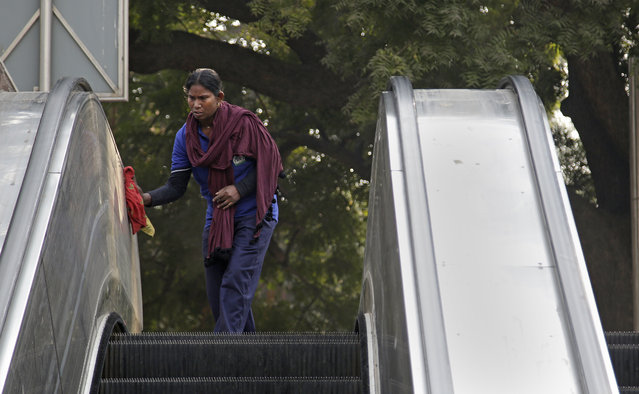 In this Wednesday, November 22, 2017, photo, Jamila Begum, 35, who works with Delhi municipality on contractual basis, cleans the railing of a subway escalator in New Delhi, India. “This year the smog was really bad. I could feel it”, she said. “It was always dark.” Begum said she stopped sitting outside during breaks because the smog was so bad. But she got sick anyway and had to stay home for three days”. (Photo by Altaf Qadri/AP Photo) 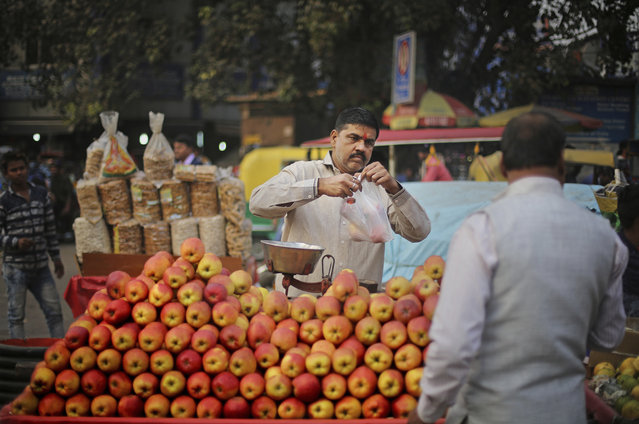 In this November 15, 2017, photo, Ajay Kumar, 46, a fruit vendor sells apples outside a railway station in New Delhi, India. Kumar has been doing this job for more than 30 years, supporting his wife and four children. He said on days this month when the pollution has been bad he’s covered his face and worn goggles. And the smog made him ill. “I had a fever and a cough. My eyes hurt, my throat hurt and it was difficult to walk”, he said. “But I still had to muster the courage to work for my children, to feed them. Work has to be done. Work is important”. (Photo by Altaf Qadri/AP Photo) 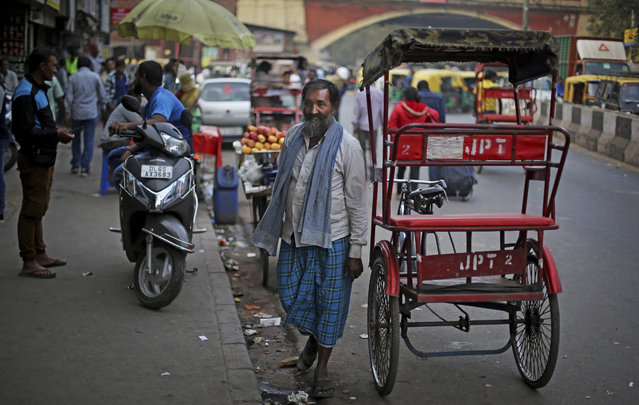 In this November 15, 2017, photo, Mohammed Anwar, 60, a cycle rickshaw puller waits for passengers outside a railway station in New Delhi, India. Anwar, has been transporting passengers through the capital’s congested streets for 35 years to support his wife and four children. Pedaling forces him to take deep breaths. “My mouth burns while I’m working”, he said. “It feels like chilies in my nose”. He said that when he washes his face each evening it is filthy. “My eyes hurt and my nose is full of dirt”. (Photo by Altaf Qadri/AP Photo) 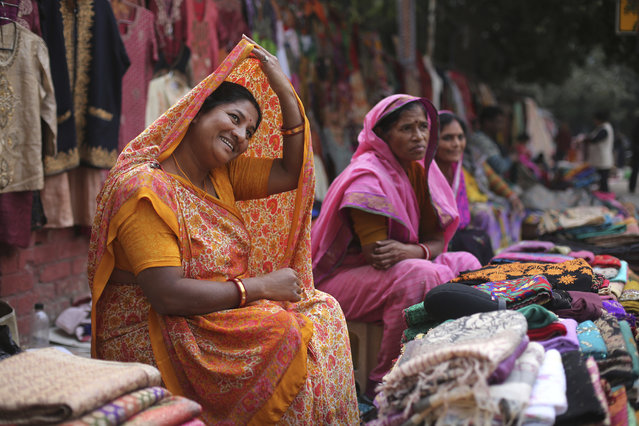 In this November 16, 2017, photo, Ratan, who has been selling traditional Indian clothes at a sidewalk stall for more than 25 years, adjusts her saree while she waits for customers in New Delhi, India. Ratan, who uses only one name, said the pollution has affected her business, with sales down by about 50 percent this month.“It’s difficult for us,” she said. “There used to be lots of tourists but now there are fewer. We want foreigners, they’re good for our business”. She said by the time she gets home each evening, her eyes and throat burn and she feels a little ill. “I don’t pay it much attention, as I have to take care of business”, she said. (Photo by Altaf Qadri/AP Photo) 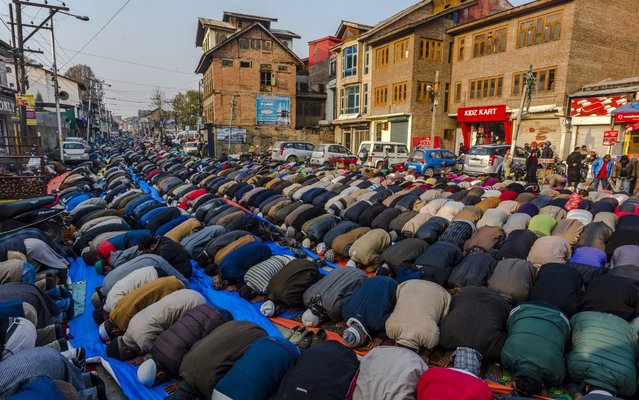 Kashmiri Muslims offer prayers outside the shrine of Khwaja Naqshband on November 22, 2017 in Srinagar, the summer capital of Indian administered Kashmir, India. Thousands of devotees from across Kashmir converge at the shrine of Khwaja Naqshband Sahib in downtown Srinagar to participate in annual congregational prayers called “Khoja Digar” on the 3rd of Rabi-ul-Awal, the third month of the Islamic calendar. (Photo by Yawar Nazir/Getty Images) 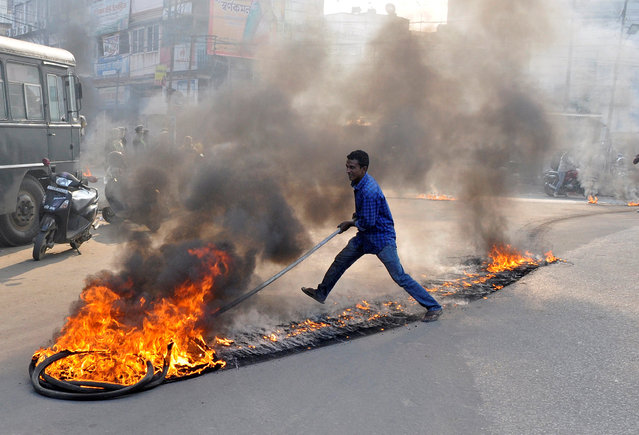 A demonstrator drags burning tires during a day-long strike to protest against the killing of Sudip Datta Bhowmik, a local journalist, who according to local media was shot dead by a Tripura State Rifles trooper on Tuesday, in Agartala, India on November 23, 2017. (Photo by Jayanta Dey/Reuters) 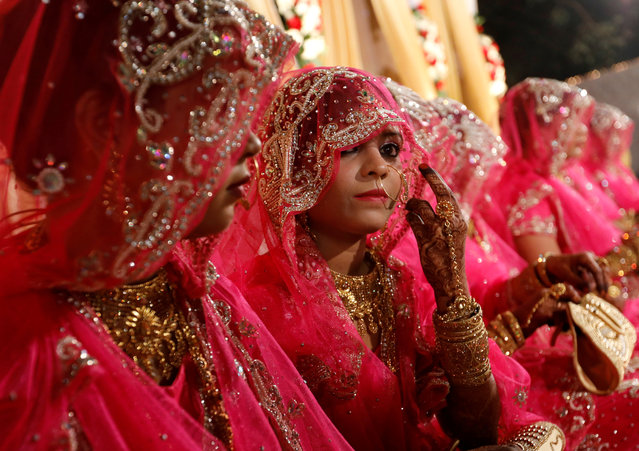 Muslim brides wait for the start of a mass marriage ceremony in Mumbai, India, November 20, 2017. (Photo by Danish Siddiqui/Reuters) 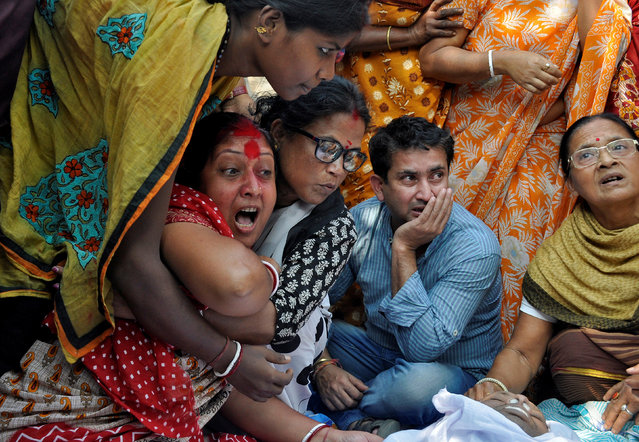 Shima (in red) mourns next to the body of her husband Sudip Datta Bhowmik, a local journalist, who according to local media was shot dead by a Tripura State Rifles trooper on Tuesday, in Agartala, India, November 22, 2017. (Photo by Jayanta Dey/Reuters) 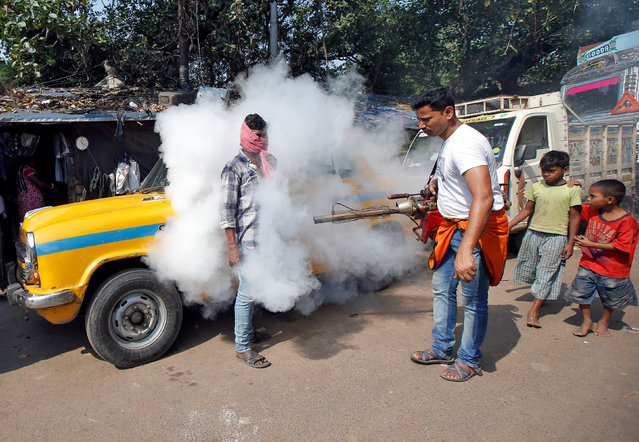 A taxi driver covers his face as a municipal worker fumigates a market to prevent the spread of dengue fever and other mosquito-borne diseases in Kolkata, India, November 20, 2017. (Photo by Rupak De Chowdhuri/Reuters) 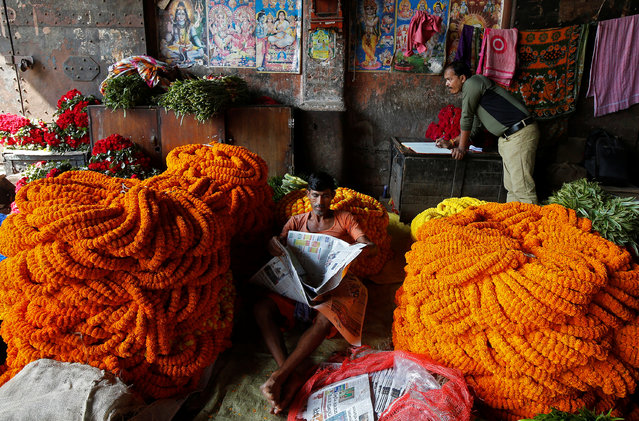 A man reads a newspaper next to marigold garlands, which are used to decorate temples and homes, at a wholesale flower market in Kolkata, India, November 21, 2017. (Photo by Rupak De Chowdhuri/Reuters) 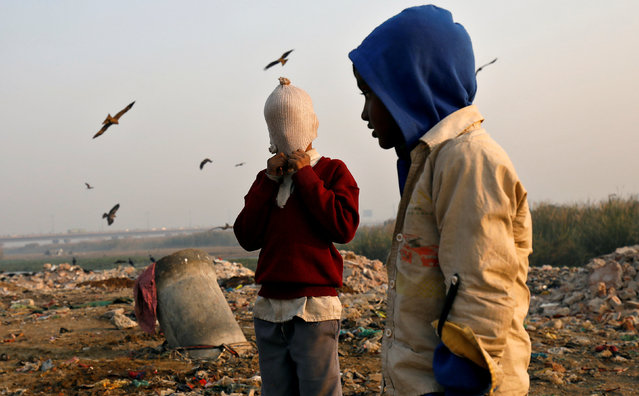 A boy covers his face with a woollen hat on the banks of the Yamuna river in Delhi, India, November 24, 2017. (Photo by Saumya Khandelwal/Reuters) 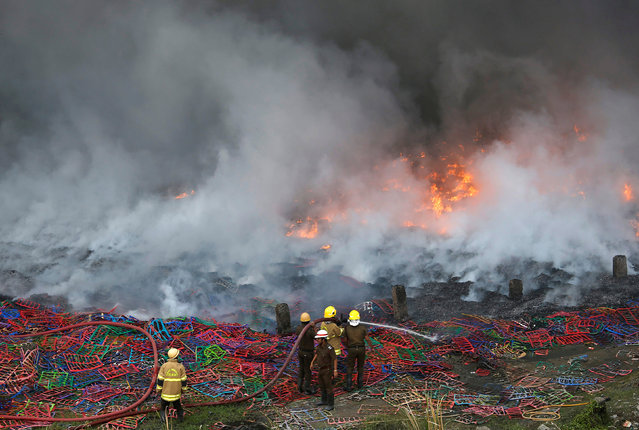 Firefighters try to douse a fire that broke out in a footwear factory at a residential area in Kolkata, India, November 24, 2017. (Photo by Rupak De Chowdhuri/Reuters) 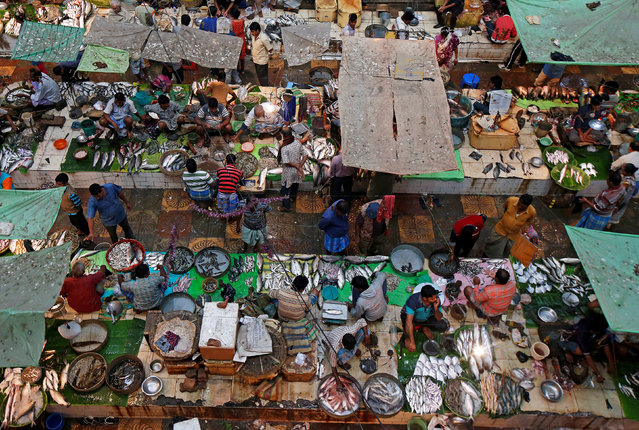 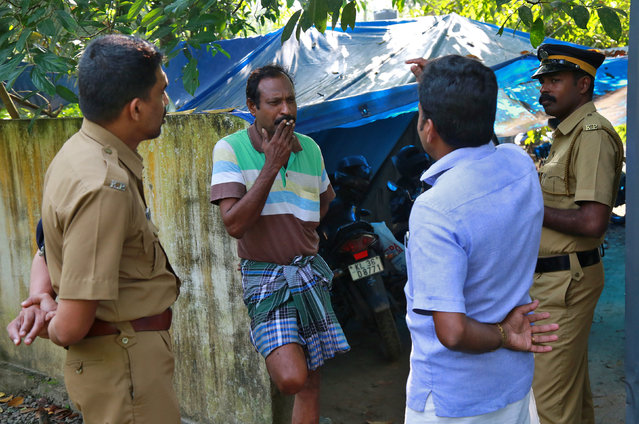 K M Ashokan (2-L), father of 24-year-old Akhila, who converted to Islam in 2016 and took a new name, Hadiya, smokes while speaking with a friend, as police officers stand guard outside his house at Vaikom in the Kottayam district of the southern state of Kerala, India November 23, 2017. (Photo by Sivaram V/Reuters) 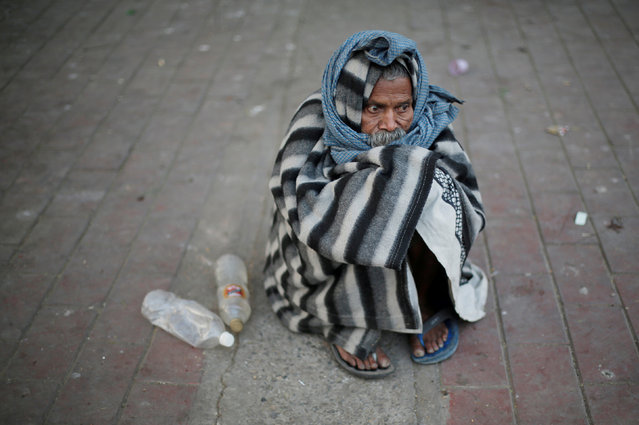 A man is covered in a quilt to keep himself warm as he sits on a pavement on a cold winter morning in New Delhi, India November 22, 2017. (Photo by Adnan Abidi/Reuters) 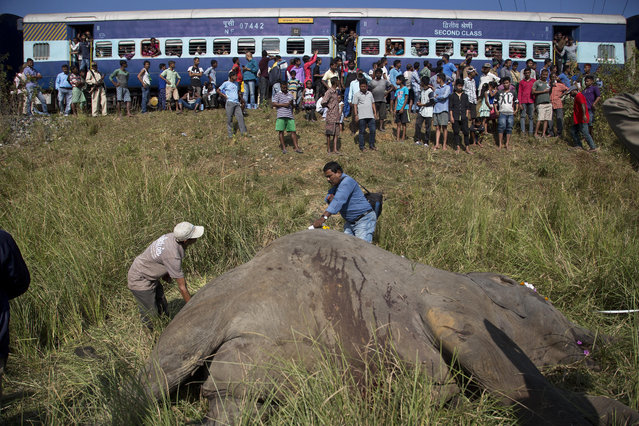 In this November 19, 2017, file photo, a passenger train passes as Indian vets measure the carcass of two endangered Asian elephants that were hit and killed by a passenger train near a railway track in Thakur Kuchi village on the outskirts of Gauhati, Assam state, India. Wildlife warden Prodipta Baruah says the elephants were part of a herd of about 15 that had ventured into the area in search of food before dawn Sunday. (Photo by Anupam Nath/AP Photo) 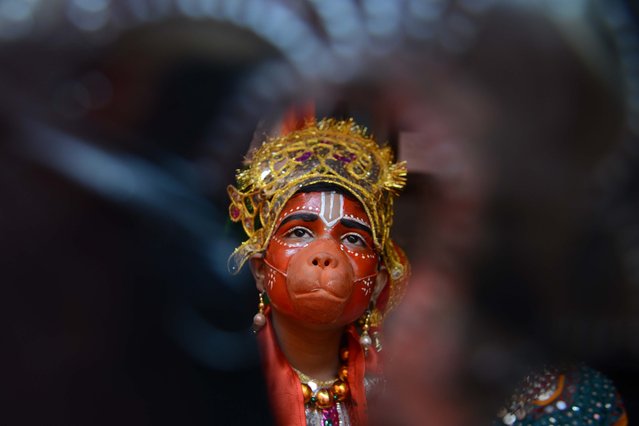 An Indian hild dressed as Hindu god Lord Hanuman waits to perform during a fancy dress competition at a school in Amritsar on November 26, 2017. (Photo by Narinder Nanu/AFP Photo) 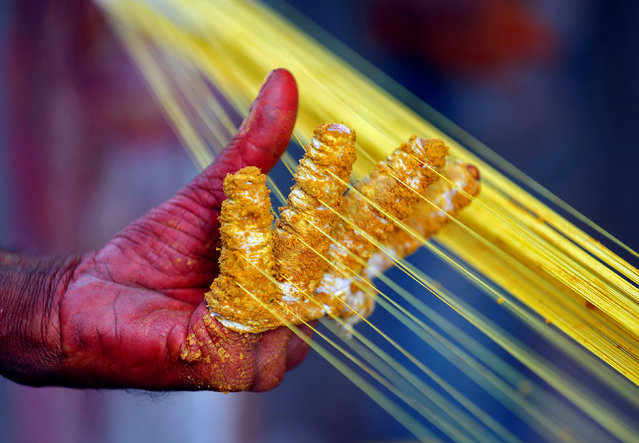