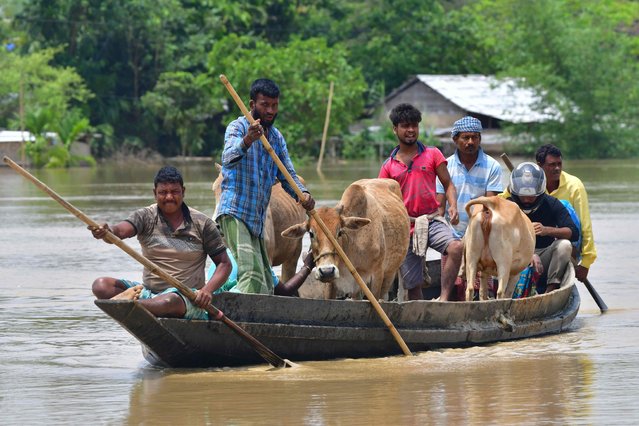 Villagers travel with their cattle on a boat through a flooded area after heavy rains in Nagaon district, Assam state, on May 19, 2022. At least 10 people, including a four-year-old child have died in floods and landslides this week after unusually heavy rains pummelled several parts of India, as forecasters warned on May 18 of more deluges. (Photo by Biju Boro/AFP Photo) 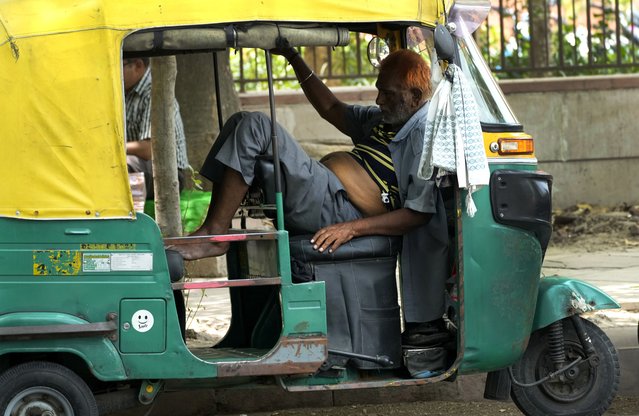 An auto rickshaw driver exhausted from intense heat rests in his vehicle, in New Delhi, Thursday, May 19, 2022. The intense heat wave sweeping through South Asia was made more likely due to climate change and it is a sign of things to come. An analysis by international scientists said that this heat wave was made 30-times more likely because of climate change, and future warming would make heat waves more common and hotter in the future. (Photo by Manish Swarup/AP Photo) 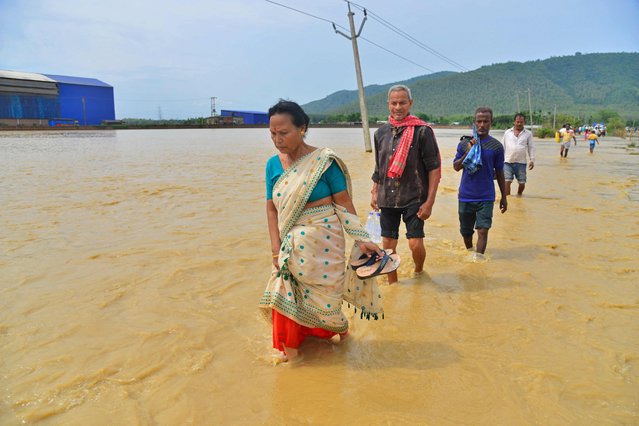 Villagers wade through a flooded road after heavy rains in Hojai district of India's Assam state on May 19, 2022. (Photo by Biju Boro/AFP Photo) 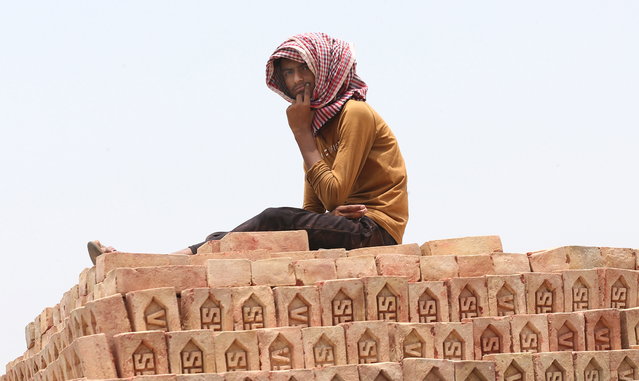 An Indian man with his face covered to avoid the heatwave as he sits on bricks during a hot afternoon on the outskirts of New Delhi, India, 19 May 2022. According to the India Meteorological Department (IMD), Delhi and National Capital Region's temperature is expected to exceed 43 degrees Celsius amid a heat wave which is continuing with its fresh spell. (Photo by Harish Tyagi/EPA/EFE) 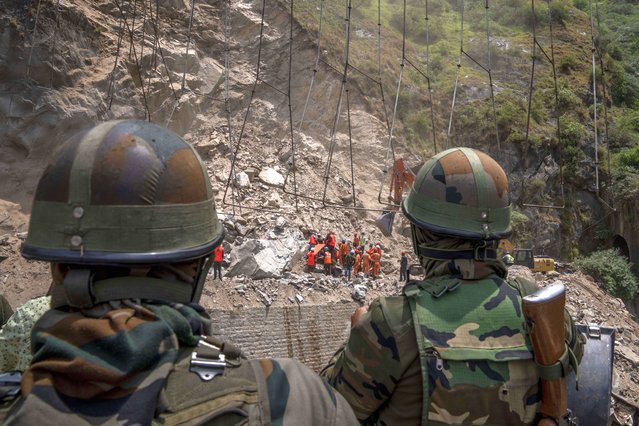 Indian army soldiers watch from a distance as earth movers dig through the rubble of a collapsed tunnel in Ramban district, south of Srinagar, Indian controlled Kashmir, Friday, May 20, 2022. An official in Indian-controlled Kashmir said Friday that 10 workers were trapped after part of a road tunnel collapsed in the Himalayan region. (Photo by Dar Yasin/AP Photo) 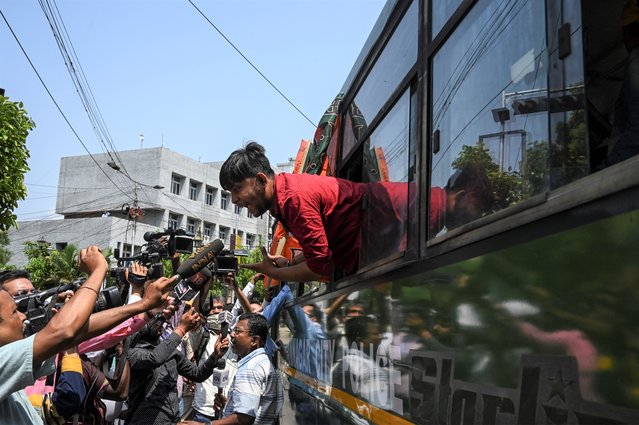 A Bharatiya Janata Party (BJP) activist (R) speaks to members of the press from a police vehicle after being detained during a protest against West Bengal's state government over alleged irregularities in the School Service Commission (SSC) recruitment process, in Kolkata on May 20, 2022. (Photo by Dibyangshu Sarkar/AFP Photo) 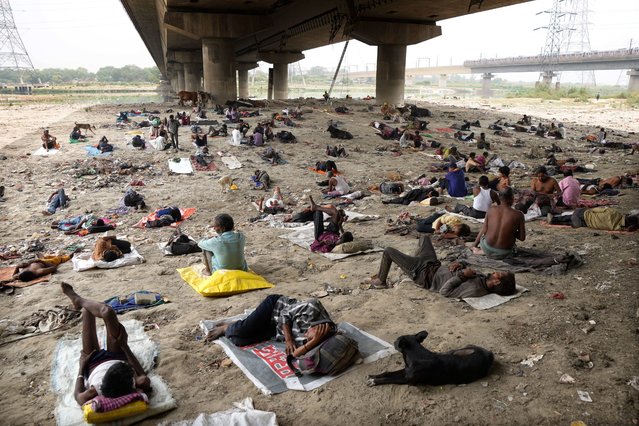 Homeless people sleep in the shade of an overbridge on a hot day in New Delhi, Friday, May 20, 2022. The Indian capital and surrounding areas are facing extreme heat wave conditions. (Photo by Manish Swarup/AP Photo) 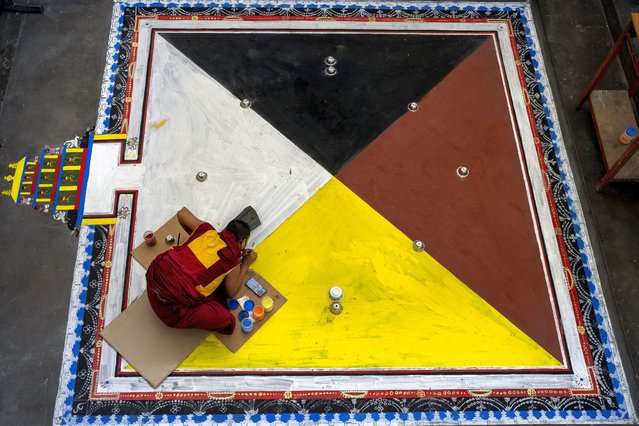 An exile Tibetan Buddhist monk creates a traditional motif on the floor in preparation for ritual prayers in Dharmsala, India, Friday, May 20, 2022. (Photo by Ashwini Bhatia/AP Photo) 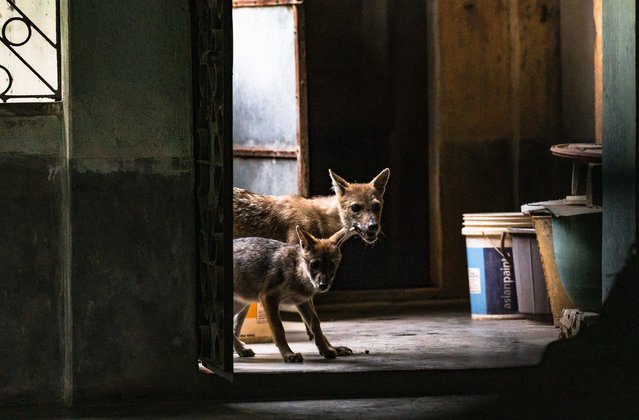 A wild golden jackals (Canis aureus) mother and her cub entered a house for food at noon. The baby was curiously sniffing all things beside him trying to enter the room of the house and her mother immediately roared and warned her. This photo was taken ahead of the International Day for Biological Diversity 2022 at Tehatta, West Bengal, India on May 21, 2022. (Photo by Soumyabrata Roy/NurPhoto via Getty Images) 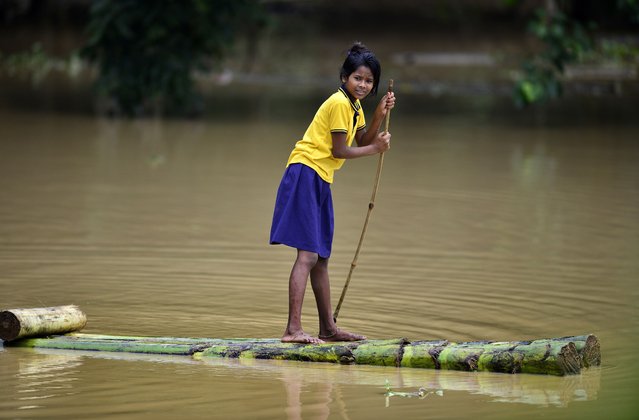 A girl floats on a makeshift raft made of banana tree wood in the flood-affected Nagaon district of Assam, India, 22 May 2022. Death toll of flood-related incidents increased to 18 people, according to statistics from the Assam State Disaster Management Authority (ASDMA). At least 839,691 people in 32 districts have been affected by the floods, the ASDMA added. (Photo by EPA/EFE/Stringer) 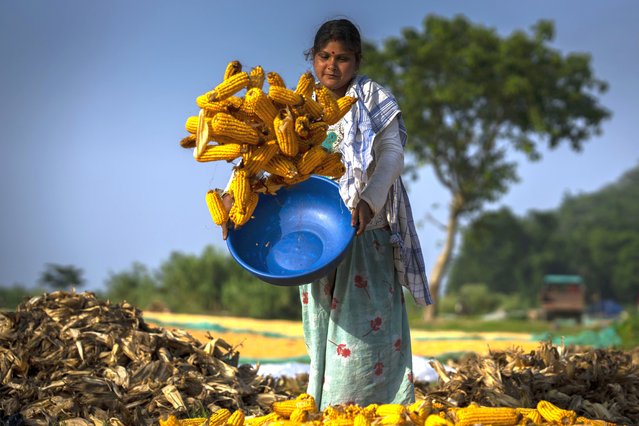 A farmer puts maize to dry in a paddy field on the outskirts of Gauhati, India, Monday, May 23, 2022. (Photo by Anupam Nath/AP Photo) 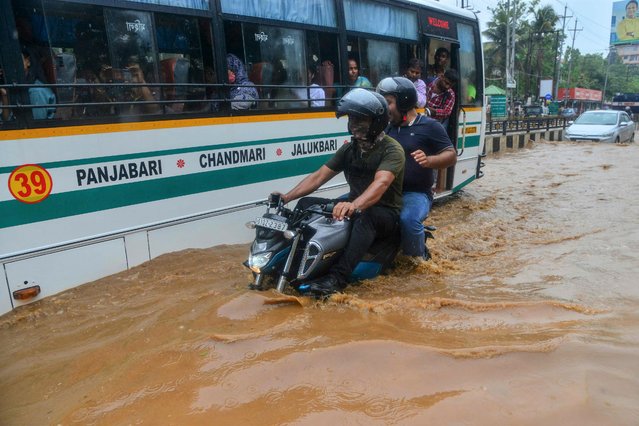 Men ride a motorbike past a bus along a waterlogged road following a heavy rainfall in Guwahati on May 25, 2022. (Photo by Biju Boro/AFP Photo) 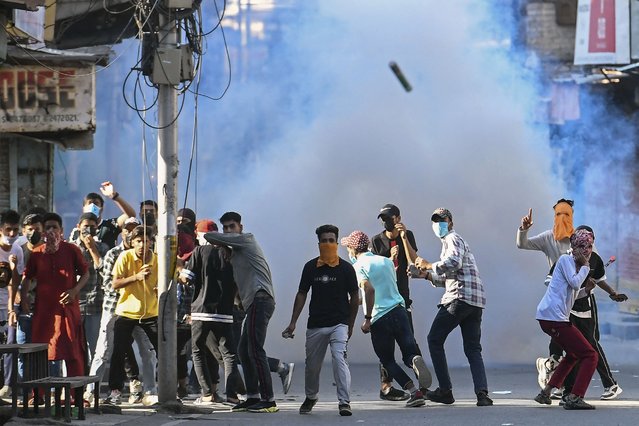 Protestors take part in a demonstration amid tear gas smoke fired by Indian security forces to disperse them in Srinagar on May 25, 2022, over the sentencing hearing of pro-independence party Jammu Kashmir Liberation Front chairman Yasin Malik. (Photo by Tauseef Mustafa/AFP Photo) 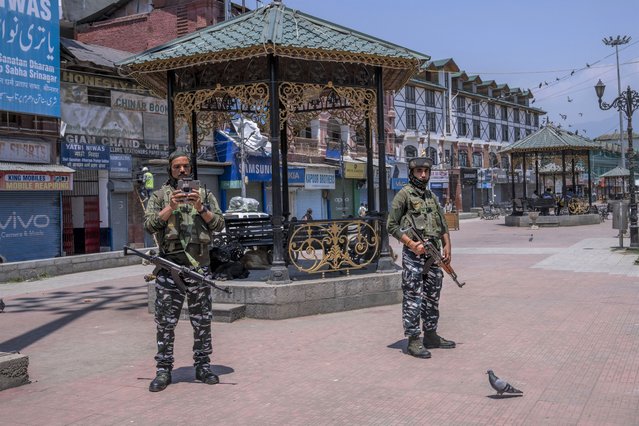 Paramilitary soldiers keep vigil with the help of a drone during shutdown in central Srinagar, Indian controlled Kashmir, Wednesday, May 25, 2022. (Photo by Dar Yasin/AP Photo) 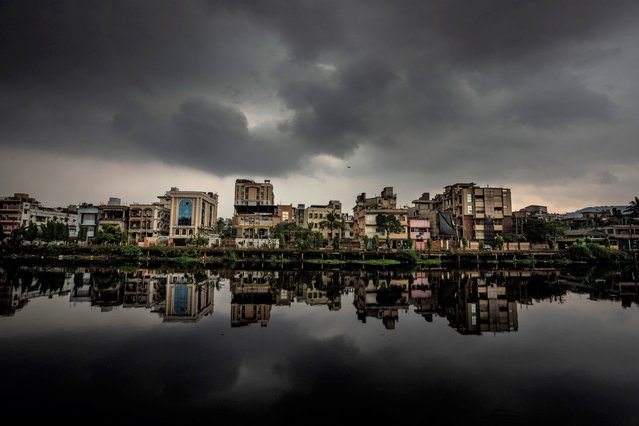 Rain clouds hover in the sky in Gauhati, India, Wednesday, May 25, 2022. (Photo by Anupam Nath/AP Photo) 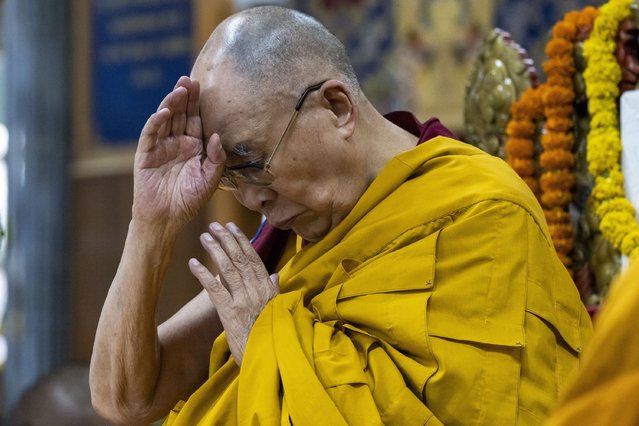 Tibetan spiritual leader the Dalai Lama gestures during a prayer session in Dharmsala, India, Wednesday, May 25, 2022. Monks of the Sakya lineage of the Tibetan Buddhism prayed for the long life of the Dalai Lama. (Photo by Ashwini Bhatia/AP Photo) 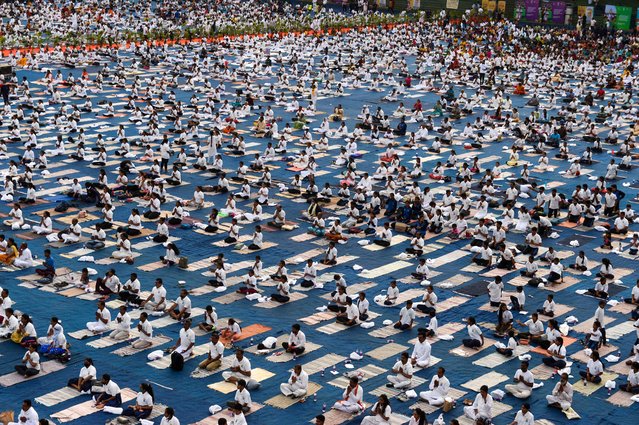 People participate in a mass yoga session at Lal Bahadur Shastri Stadium in Hyderabad on May 27, 2022. (Photo by Noah Seelam/AFP Photo) A youth cools off in the Ganges River on a hot summer afternoon in Allahabad on May 27, 2022. (Photo by Sanjay Kanojia/AFP Photo) 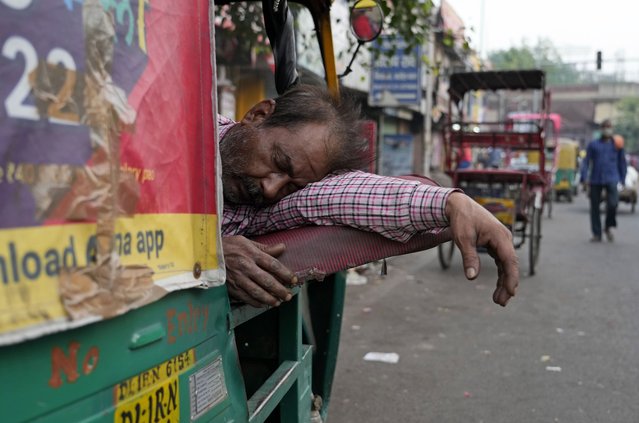