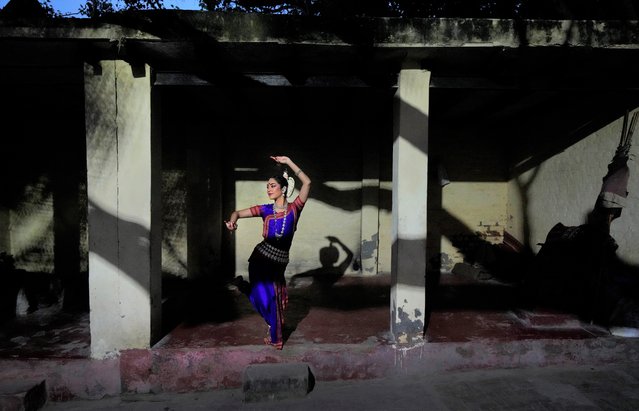 Indian classical Odissi dancer Damini Mehta, 22, poses on the ghats of the river Yamuna, in New Delhi, India, Saturday, October 2, 2021. Mehta, a professional dancer and a young entrepreneur said that she has cultivated a sense of sacred significance with the dance during the pandemic, it has helped her experience familiarity during uncertain times. (Photo by Manish Swarup/AP Photo) 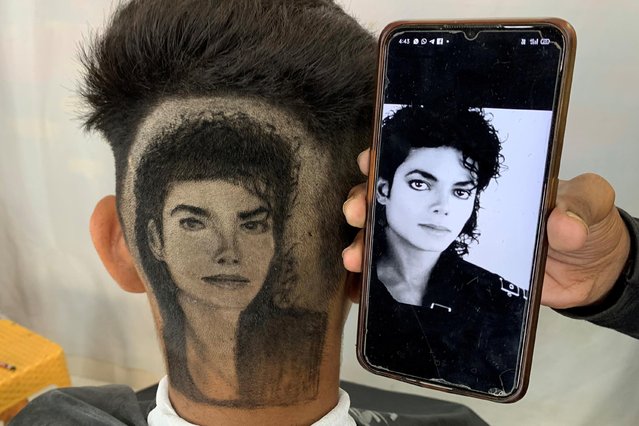 Rajwinder Singh Sidhu, 29, a barber, created this detailed portrait of Michael Jackson inside his shop in Dabwali town, in the northern state of Punjab, India, October 12, 2021. (Photo by Sunil Kataria/Reuters) 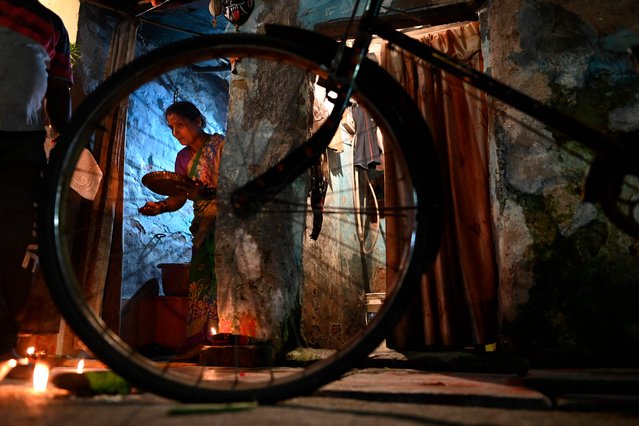 Hindu devotees perform Ayudha Puja ritual (worship of instruments) on their bicycle on the occasion of Dussehra-Vijay Dashami festival in New Delhi on October 14, 2021. (Photo by Sajjad Hussain/AFP Photo) 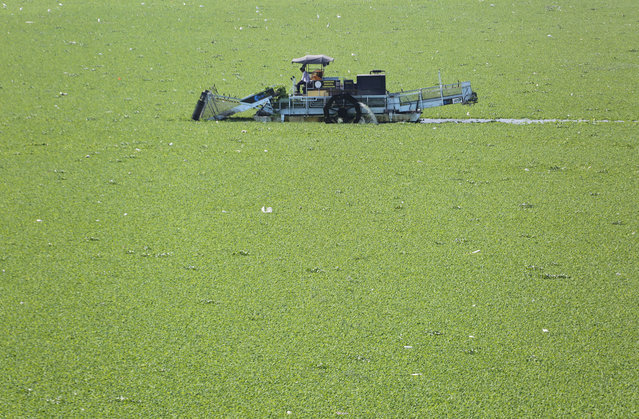 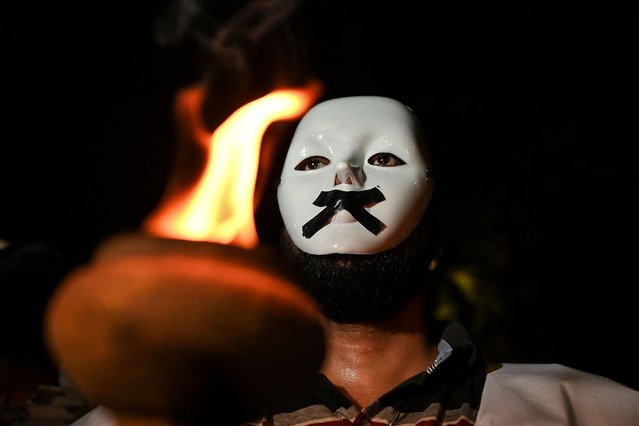 An Indian youth congress (IYC) member wearing a white mask with a taped mouth holds a torch during a protest in New Delhi on October 13, 2021, days after at least eight people died in an incident involving protesting farmers in Lakhimpur Kheri district of Uttar Pradesh state. (Photo by Sajjad Hussain/AFP Photo) 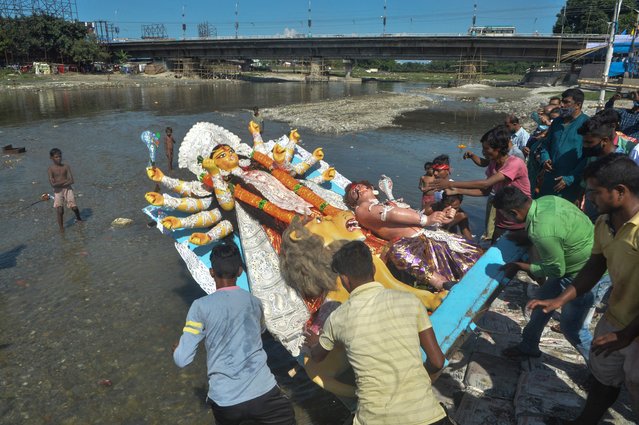 Hindu devotees immerse an idol of the ten-handed Hindu Goddess Durga in the Mahananda River during the final day of Durga Puja festival in Siliguri on October 15, 2021. (Photo by Diptendu Dutta/AFP Photo) 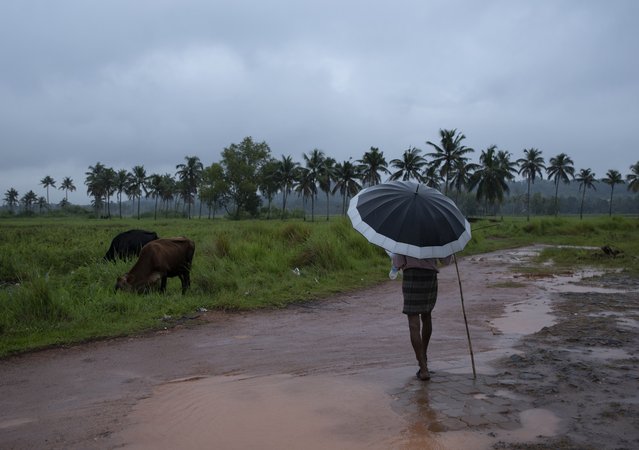 A man holds an umbrella and keeps a watch on his grazing cows on a rainy day in Kochi, Kerala state, India, Saturday, October 16, 2021. Heavy rains lashed the state Saturday, triggering flash floods and landslides across districts. (Photo by R.S. Iyer/AP Photo) 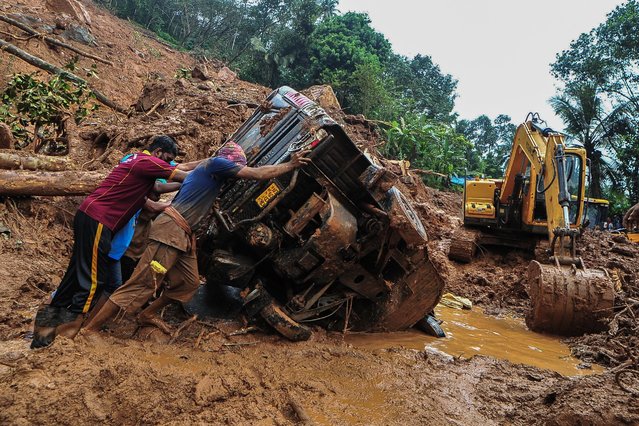 Rescue workers push a overturned vehicle stuck in the mud and debris at a site of a landslide claimed to be caused by heavy rains in Kokkayar in India's Kerala state on October 17, 2021. (Photo by AFP Photo/Stringer) 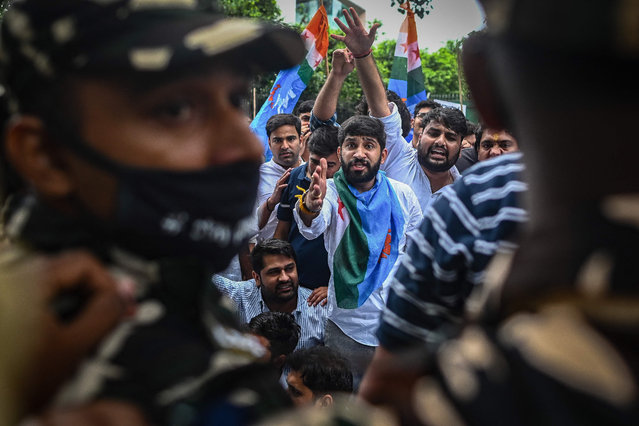 Student activists from National Students' Union of India (NSUI) shout slogans during a demonstration in New Delhi on October 18, 2021 against fresh outbreak of violence in Indian-administered Kashmir in which two labourers were killed by gunmen. (Photo by Sajjad Hussain/AFP Photo) 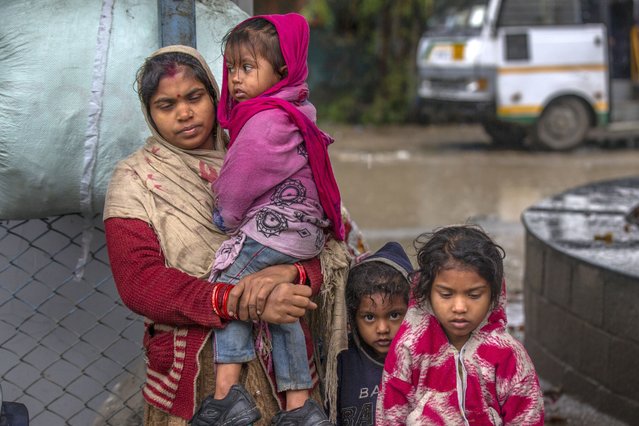 Indian migrant laborer Gunjan Kumari with her daughters waits at a government transport yard trying to leave for their homes in Srinagar, Indian controlled Kashmir on October 18, 2021. A spate of recent killings has rattled Indian-controlled Kashmir, with violence targeting local minority members and Indian civilians from outside the disputed region. Assailants shot and killed five Indian migrant workers this month increasing the death toll in targeted killings to 32 this year. (Photo by Dar Yasin/AP Photo) 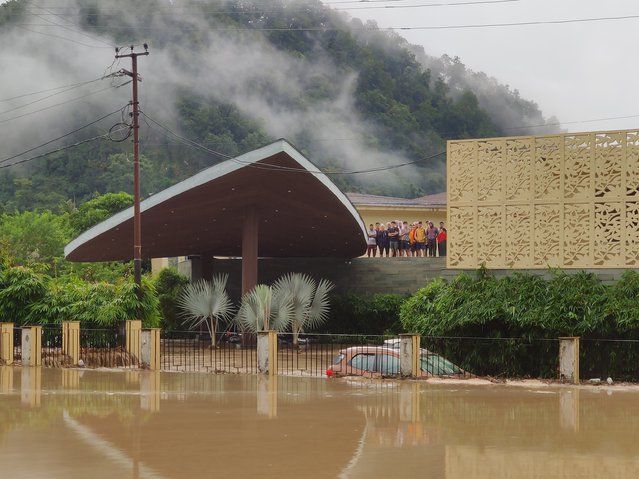 Hotel guests stand on the roof of Lemon Tree hotel, as the hotel gets flooded with the waters from an overflowing Kosi River in Jim Corbett National Park, Uttarakhand state, Tuesday, October 19, 2021. More than 20 people have died and many are missing in floods triggered by heavy rains in the northern Indian state of Uttarakhand, officials said Tuesday. (Photo by Mustafa Quraishi/AP Photo) 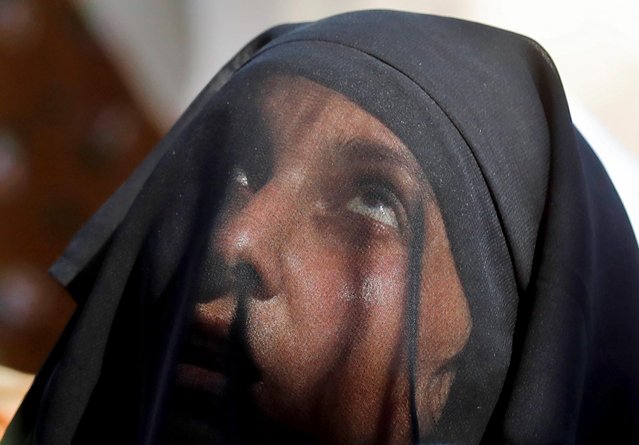 A Kashmiri Muslim woman looks up at a relic believed to be a hair from the beard of Prophet Mohammad, being displayed during the festival of Eid-e-Milad-ul-Nabi, the birth anniversary of the prophet, at Hazratbal shrine in Srinagar October 19, 2021. (Photo by Danish Ismail/Reuters) 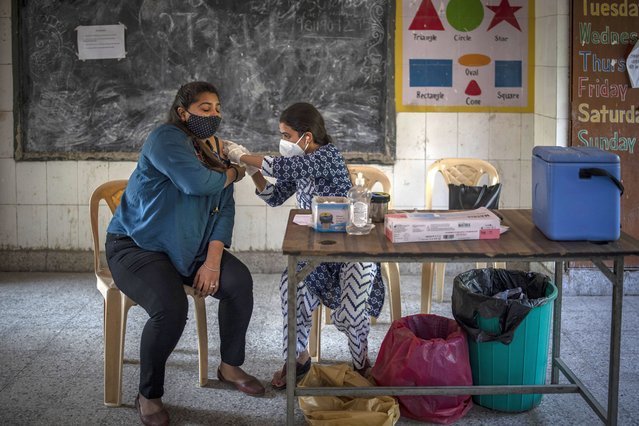 A health worker inoculates a woman during a vaccination drive against coronavirus inside a school in New Delhi, India, Wednesday, October 20, 2021. India is nearing a milestone of administering a total of one billion doses against COVID-19. (Photo by Altaf Qadri/AP Photo) 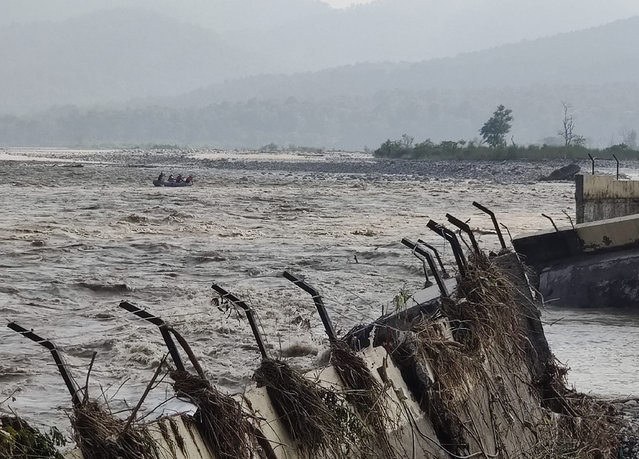 A rescue team delivers rations and essential supplies to Chukum village across the flooded Kosi river, with the broken retaining wall of the Lemon Tree hotel seen on right, in Uttarakhand state, India, Wednesday, October 20, 2021. At least 46 people have died and several are missing after floods triggered by heavy rains hit the northern Indian state of Uttarakhand, officials said Wednesday. (Photo by Mustafa Quraishi/AP Photo) 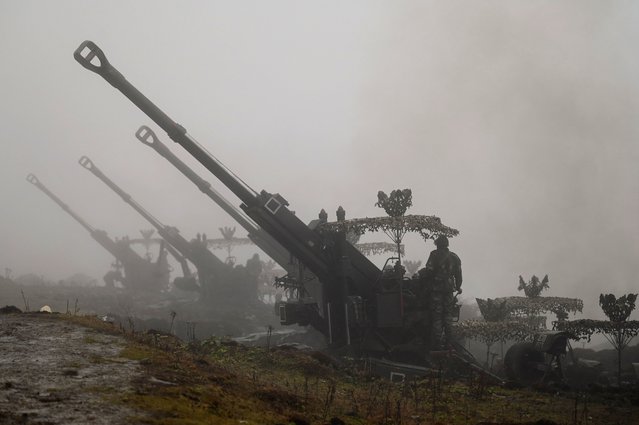 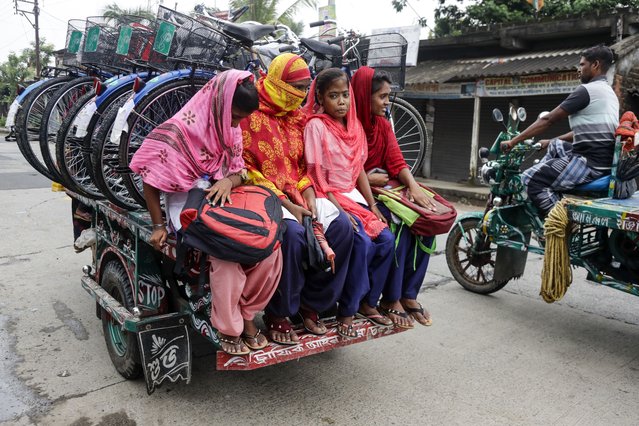 Girls ride an improvised motorbike public transport along with bicycles they received from their school under a government scheme in Malancha, South 24 Pargana district, India, Wednesday, October 20, 2021. (Photo by Bikas Das/AP Photo) 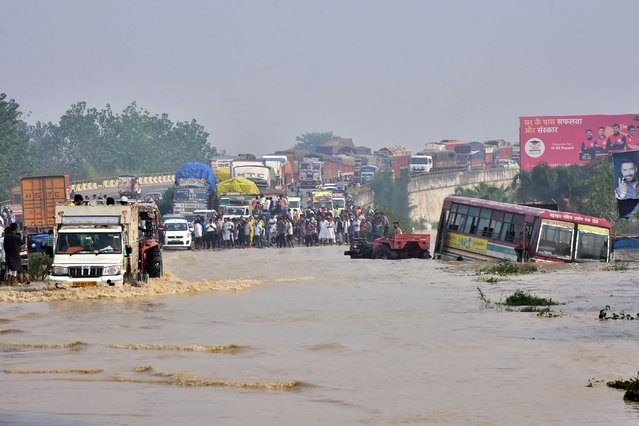 Commuters stand on a flyover on a flooded national highway after river Kosi overflowed following heavy rains near Rampur in India's Uttar Pradesh state on October 20, 2021, as the death toll from days of flooding and landslides in India and Nepal crossed 100. (Photo by AFP Photo/Stringer) 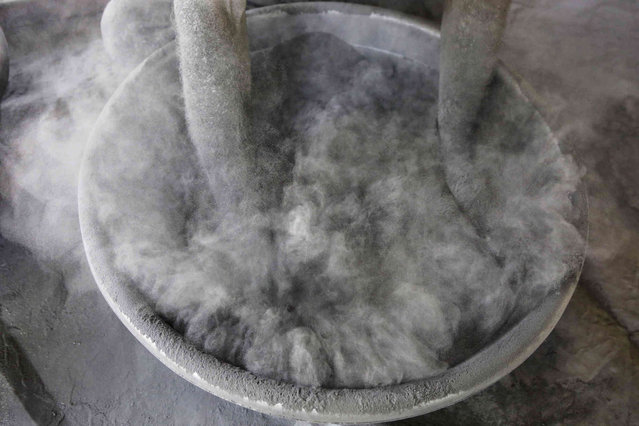 An Indian worker mixes gun powder to make firecrackers for the upcoming Hindu festival Diwali at a factory on the outskirts of Ahmedabad, India, Wednesday, October 20, 2021. Fire crackers are in huge demand in India during Diwali, the festival of lights, which will be celebrated on Nov. 4. (Photo by Ajit Solanki/AP Photo) 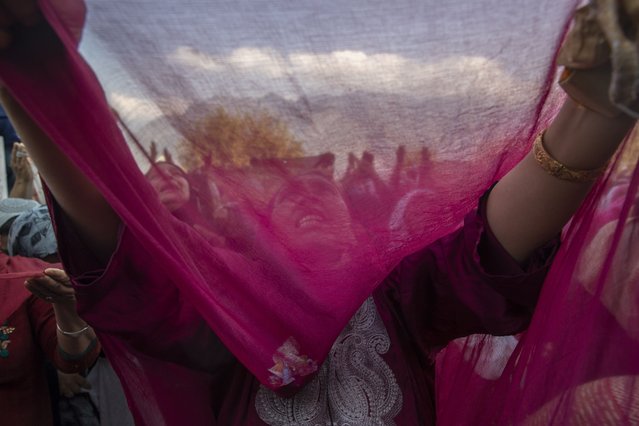 Kashmiri Muslims raise their hands in prayer as a head priest displays a relic, believed to be a hair from the beard of the Prophet Mohammad, at the Hazratbal shrine on Eid-e-Milad, the birth anniversary of the prophet, in Srinagar, Indian controlled Kashmir, Tuesday, October 19, 2021. (Photo by Dar Yasin/AP Photo) 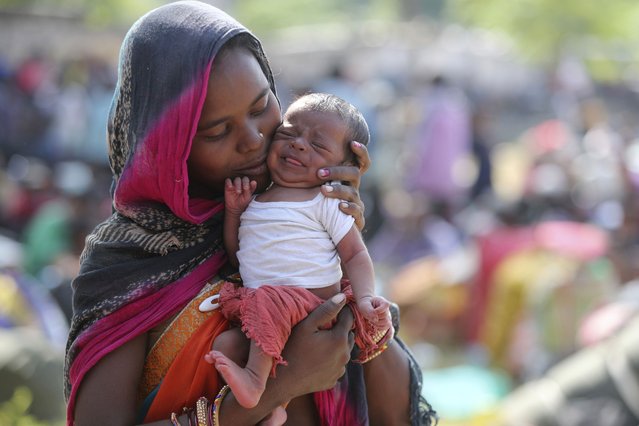 Aameen, a migrant laborer, holds her fifteen-day-old daughter Aradhana, as she waits at a railway station to return to her hometown, in Jammu, India, Thursday, October 21, 2021. Indian-controlled Kashmir has witnessed a major rise in violence targeting Indian civilians who hail from outside of the disputed Himalayan region. (Photo by Channi Anand/AP Photo)
Edit Del
22 Oct 2021 10:00:00, post received 0 comments
Publication archive:
←   →
Popular tags:
All tags
Last searches: