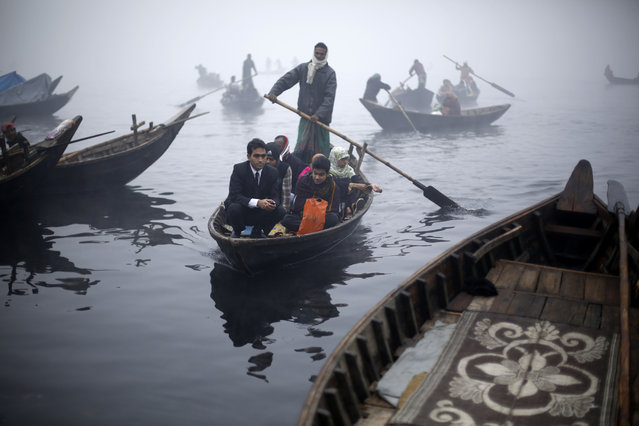 People boats are rowed across the Buriganga river during the nationwide dawn to dusk strike in Dhaka, Bangladesh, December 29, 2014. The Bangladesh Nationalist Party (BNP) led 20-party opposition alliance has called for the strike to stress their demands for new elections under a caretaker administration. Most of shops, business establishments, school and colleges remained closed during the strike. (Photo by Abir Abdullah/EPA) 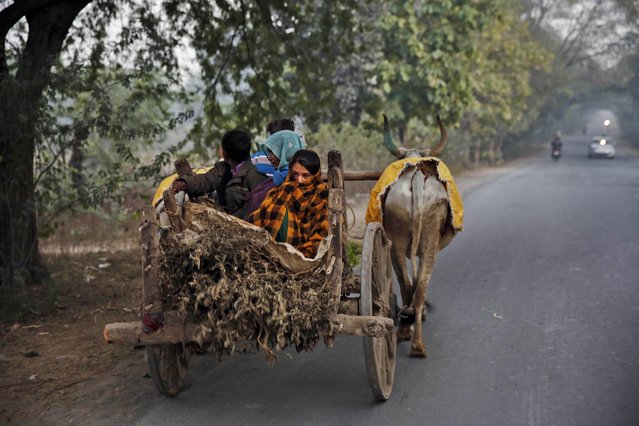 An Indian woman wrapped in a shawl travels with others on a bullock cart on a cold day at Jhansi district, in Bundelkhand, India, Monday, December 29, 2014. Most parts of north India Monday continued to shiver under biting cold with the mercury dipping several notches. (Photo by Rajesh Kumar Singh/AP Photo) 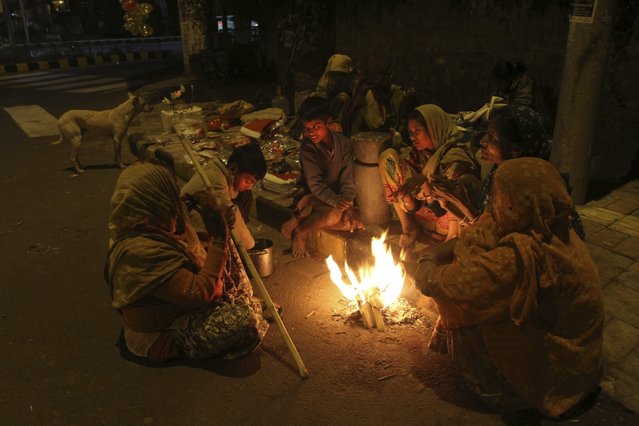 An Indian family living on a roadside keeps themselves warm by sitting around a bonfire in Ahmedabad, India, Friday, December 26, 2014. Cold wave conditions continues unabated in the northern region with fog enveloping most areas and affecting transport services. (Photo by Ajit Solanki/AP Photo) 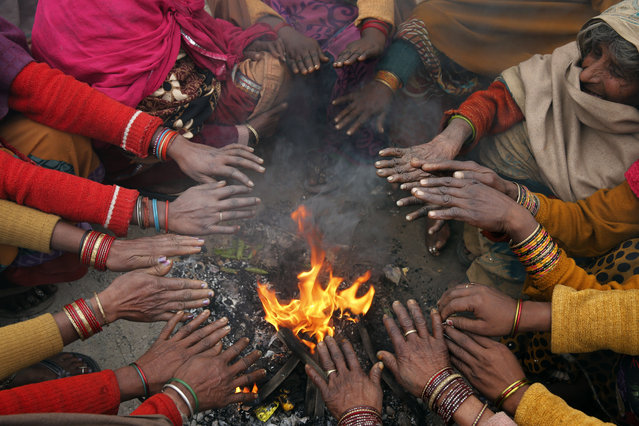 In this December 22, 2014 photo, Indian passengers warm themselves around a fire as they wait for their train to arrive on a cold morning, in Allahabad, India, Monday. Cold wave conditions intensified across northern India as temperatures dipped along with thick blankets of fog cutting out sunlight. (Photo by Rajesh Kumar Singh/AP Photo) 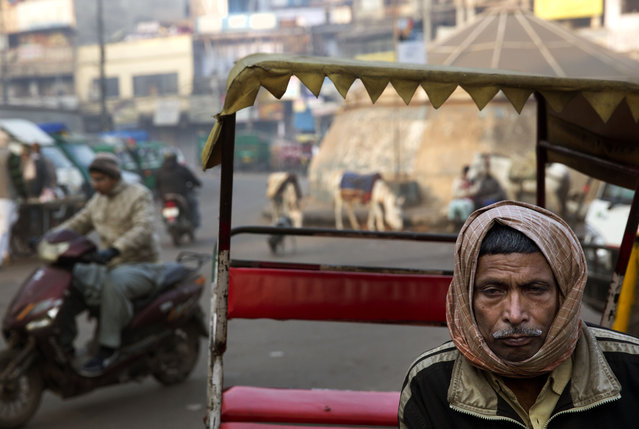 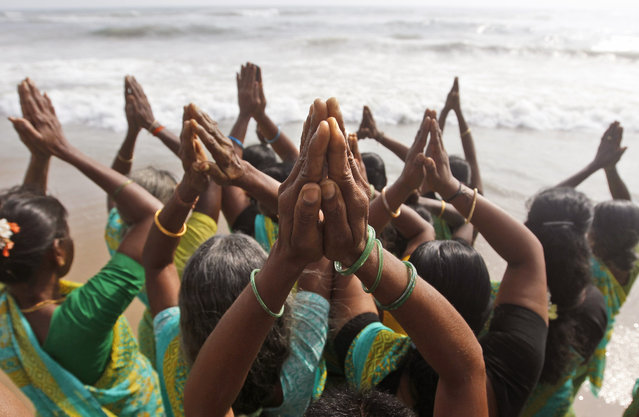 In this Friday, December 26, 2014 photo, Indian women offer prayers on the Marina Beach at the Bay of Bengal to commemorate the 10th anniversary of the 2004 Tsunami in Chennai, India. Crying onlookers took part in beachside memorials and religious services across Asia on Friday to mark the 10th anniversary of the Indian Ocean tsunami that left more than a quarter million people dead in one of modern history's worst natural disasters. (Photo by Arun Sankar K./AP Photo) 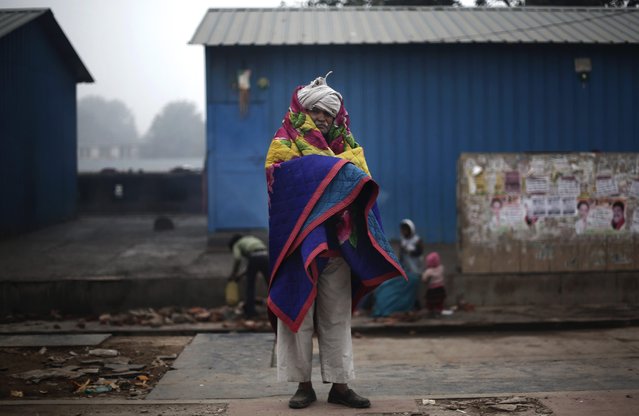 A man wrapped up in a quilt waits for a bus at a stand on a cold winter morning in New Delhi December 25, 2014. According to information posted on India's metrological department website, the minimum temperature in New Delhi on Tuesday was reported to be 6 degrees Celsius (42.8 degrees Fahrenheit). (Photo by Adnan Abidi/Reuters) 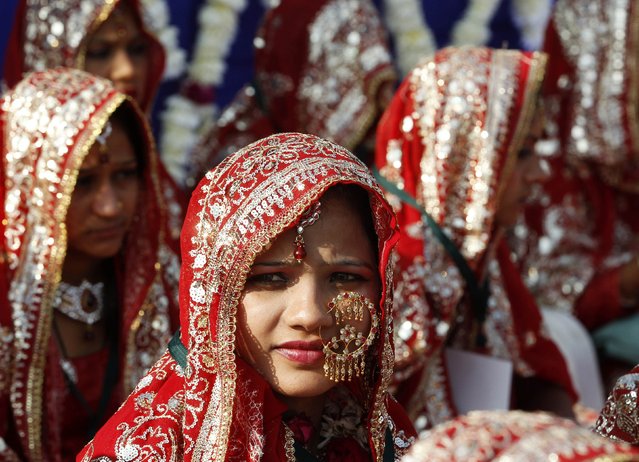 Muslim brides sit as they wait for their weddings to start during a mass marriage ceremony in the western Indian city of Ahmedabad December 25, 2014. A total of 80 Muslim couples from various parts of the city took wedding vows during the mass marriage ceremony organised by a Muslim voluntary organisation, organisers said. (Photo by Amit Dave/Reuters) 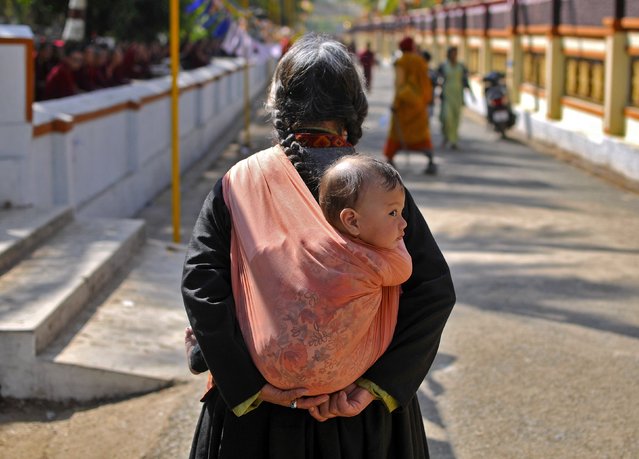 A Tibetan woman carries a child on her back, as she walks to attend the Jangchup Lamrim teachings conducted by the exiled Tibetan spiritual leader the Dalai Lama at the Gaden Jangtse Thoesam Norling Monastery at Mundgod in the southern Indian state of Karnataka December 27, 2014. (Photo by Abhishek N. Chinnappa/Reuters) 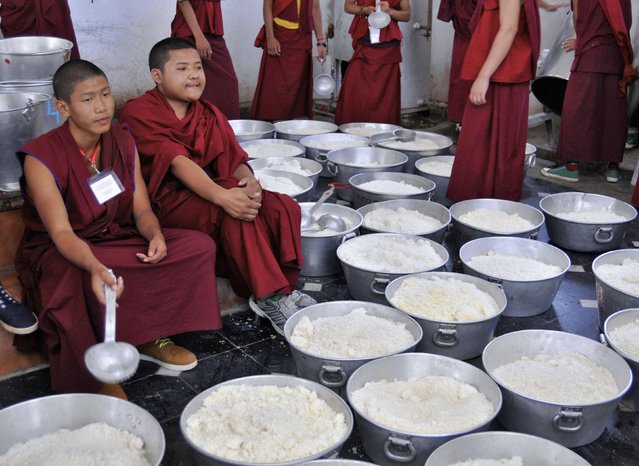 Young Buddhist monks wait to serve cooked rice to the attendees of the Jangchup Lamrim teachings conducted by the exiled Tibetan spiritual leader the Dalai Lama (unseen) at the Gaden Jangtse Thoesam Norling Monastery in Mundgod in the southern Indian state of Karnataka December 28, 2014. (Photo by Abhishek N. Chinnappa/Reuters) 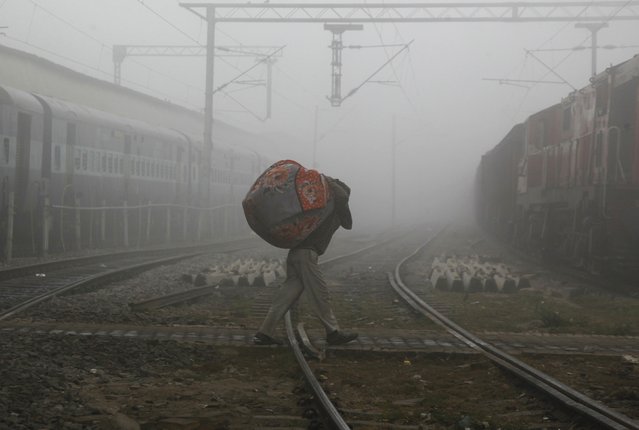 A man carries blankets as he crosses railway tracks on a foggy and cold winter morning in the northern Indian city of Allahabad December 29, 2014. (Photo by Jitendra Prakash/Reuters) 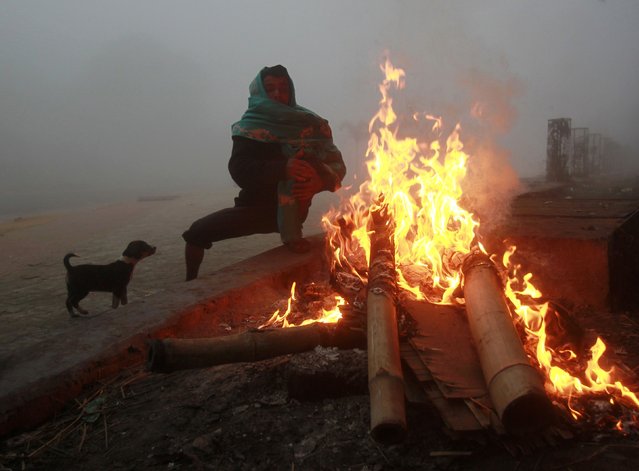 A man warms himself by a bonfire as a puppy looks on a cold and foggy morning in Agartala, capital of India's northeastern state of Tripura, December 29, 2014. (Photo by Jayanta Dey/Reuters) 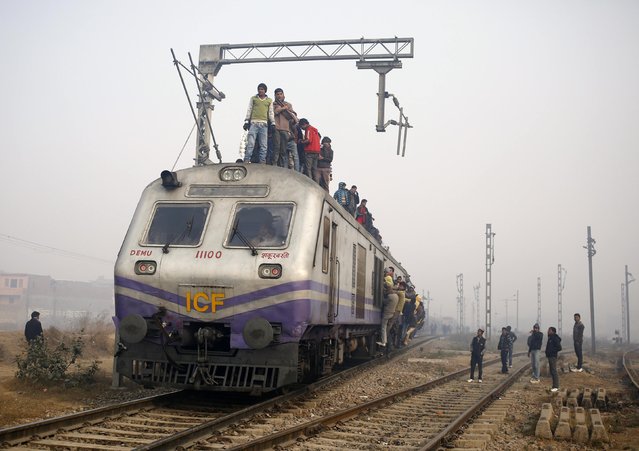 Passengers crowd atop a train as they travel on a cold winter morning at a railway station in Ghaziabad on the outskirts of New Delhi December 29, 2014. (Photo by Anindito Mukherjee/Reuters) 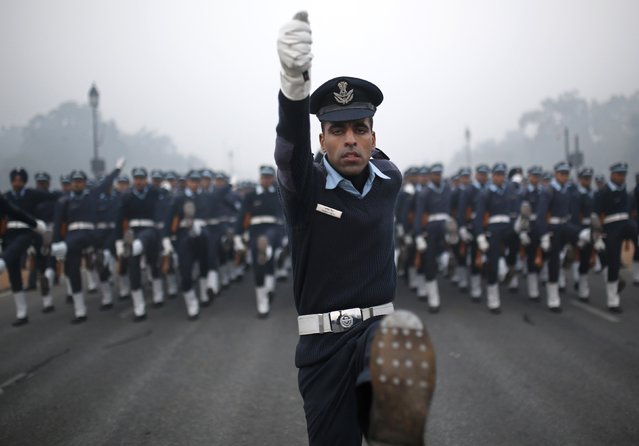 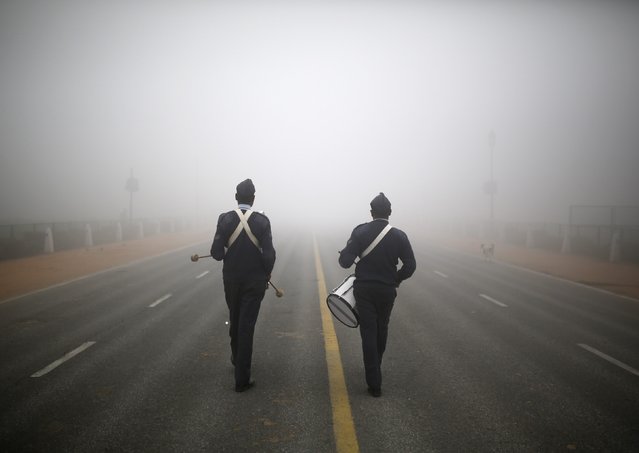 Indian Air Force band personnel perform as they rehearse for the Republic Day parade on a cold and foggy winter morning in New Delhi December 30, 2014. (Photo by Ahmad Masood/Reuters) 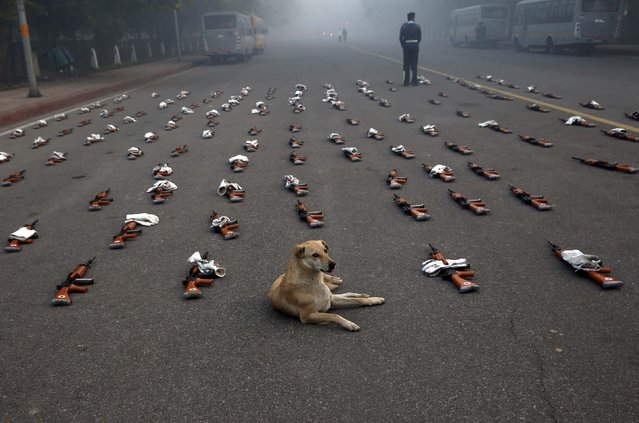 A stray dog sits between guns and gloves belonging to Indian Air Force soldiers during a break of a rehearsal for the Republic Day parade on a cold and winter morning in New Delhi December 30, 2014. (Photo by Ahmad Masood/Reuters) 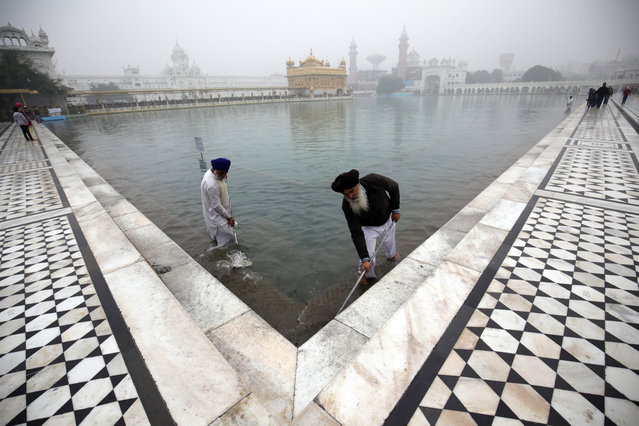 Sikh men perform the service of cleaning the “Sarowar” or the sacred pond of the Golden Temple, the holiest of Sikh shrines on the occasion of the 349th birth anniversary of the tenth Guru or master of the Sikhs, Sri Guru Gobind Singh in Amritsar, India, December 28, 2014. Guru Gobind Singh Ji was the Guru who initiated the special order or sect of the Sikhs called the Khalsa Panth. (Photo by Raminder Pal Singh/EPA) 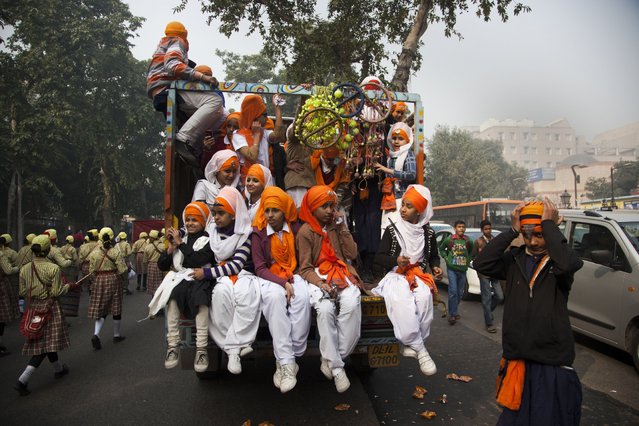 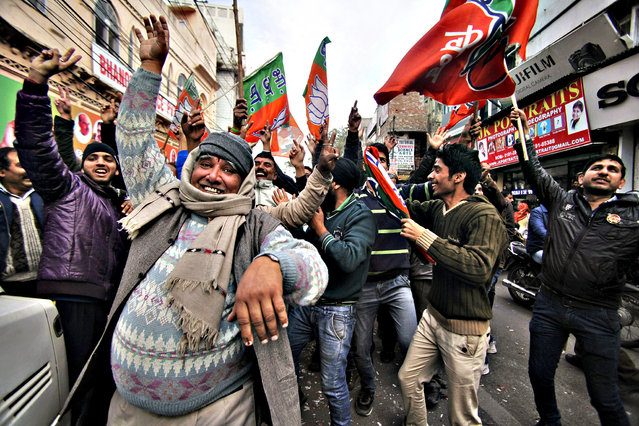 Bharatiya Janata Party (BJP) supporters dance to celebrate the news of early election result trends outside their party headquarters in Jammu, India, Tuesday, December 23, 2014. India's ruling Hindu nationalist Bharatiya Janta Party is poised to emerge as an important political player in the disputed Himalayan region of Kashmir, as votes in local elections are being counted. (Photo by Channi Anand/AP Photo) 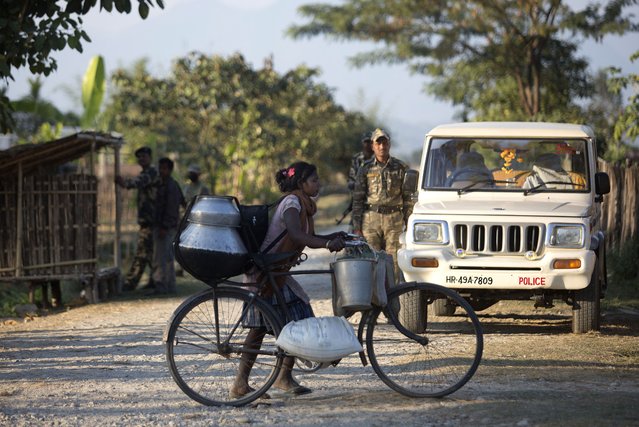 Indian policemen stand guard as an Indian tribal girl leaves for a relief shelter after her village was attacked by an indigenous separatist group, in Shamukjuli village in Sonitpur district of Indian eastern state of Assam, Wednesday, December 24, 2014. Hundreds of survivors of a brutal rebel attack that killed at least 63 people in northeastern India sought shelter Wednesday in a church and school while security forces imposed a curfew in a bid to contain the latest bout of ethnic violence. (Photo by Anupam Nath/AP Photo) 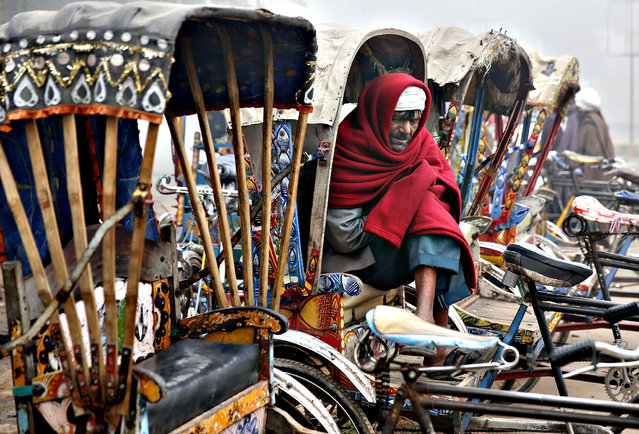 A rickshaw puller wrapped up in a blanket waits for customers on a cold morning at Allahabad, India Monday, December 22, 2014. Cold wave conditions intensified across northern India as temperatures dipped along with thick blankets of fog cutting out sunlight. (Photo by Rajesh Kumar Singh/AP Photo) 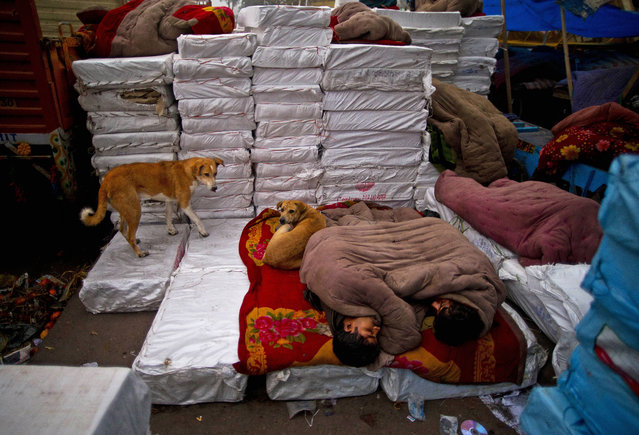