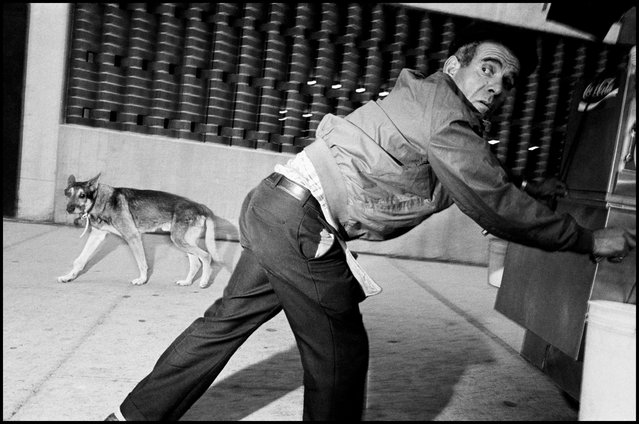 New York City, USA, 1989. Man, dog, cart. The famous agency Magnum, which has overseen some of the world’s greatest photojournalism, has commissioned its members to consider the idea of “the decisive moment”. The (More or Less) Decisive Moments print sale is on until 11pm, Friday 10 June, 2016. (Photo by Bruce Gilden/Magnum Photos) 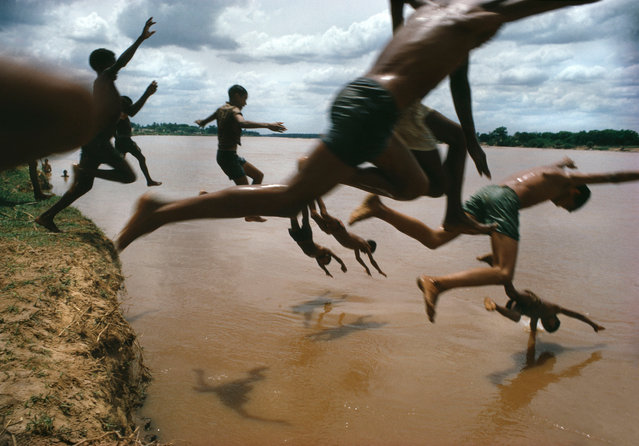 Leticia, Amazonas, Brazil, 1966. The Amazon river. “The decisive moment” is a term coined by Henri Cartier-Bresson, the French pioneer who championed composed – rather than purely instinctive – photography. Magnum photographers were invited to select images that sum up the decisive moment for them, and share their thoughts. (Photo by Bruno Barbey/Magnum Photos) 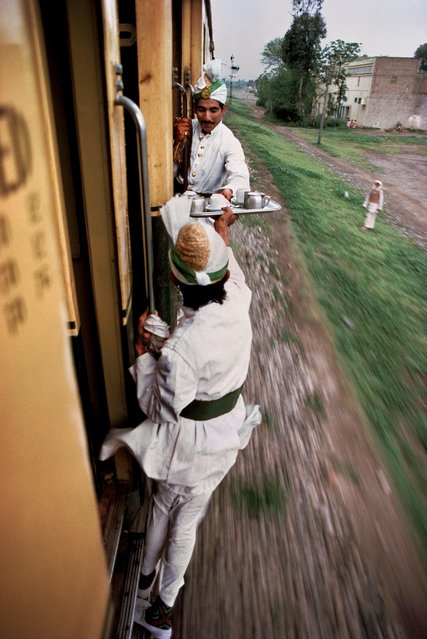 Pakistan, 1983. Breakfast tea being passed between cars on the railway between Peshawar and Lahore. Steve McCurry writes: “Tea is such an important part of Pakistan’s culture that a tea plant is on the state emblem of the country. Tea is served with every meal, for tea breaks during the workday, and for any and every social occasion. The fleeting moment captured in this image demonstrates the integral part the nation’s elixir plays in daily life, even for the travellers on this train”. (Photo by Steve McCurry/Magnum Photos) 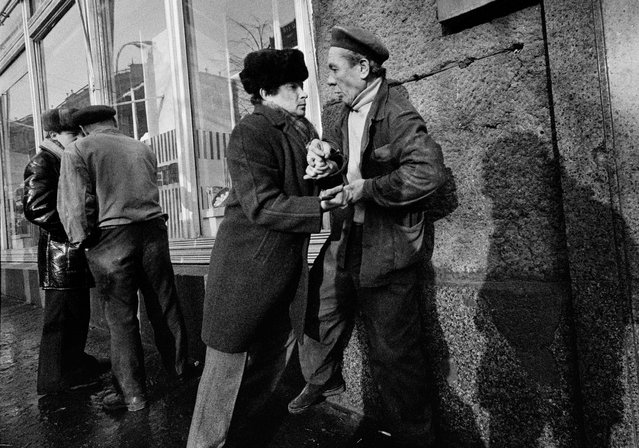 Moscow, Russia, 1981. An attempted attack. Gueorgui Pinkhassov writes: “Unfortunately, I can’t tell you any more than what you see in the photo. I, myself, didn’t see anything; I walked by without slowing my pace. My shadow with my lowered head is also captured in this moment – witnessing that I wasn’t a witness. Although this was one of my first forays into street photography, my reflexes didn’t fail me... Here, the moment decides, not you”. (Photo by Gueorgui Pinkhassov/Magnum Photos) 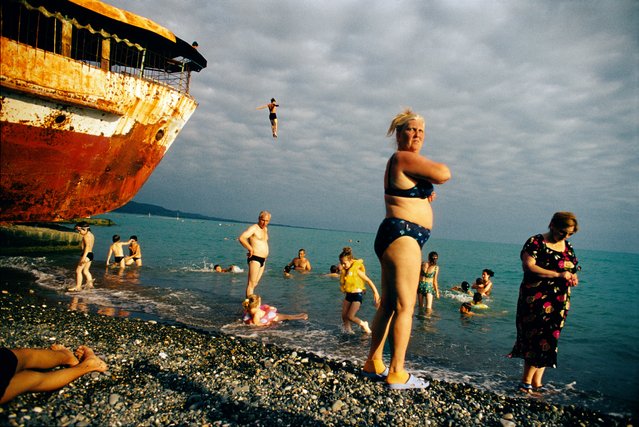 Sukhum, Abkhazia, Georgia, 2005. Sea bathers. Jonas Bendiksen writes: “When people are hurling themselves from old shipwrecks I don’t necessarily think, ‘Oh, here is a decisive moment’. Actually, I often don’t think so much at all when I photograph, it is more gut instinct working, just lots of reactions”. (Photo by Jonas Bendiksen/Magnum Photos) 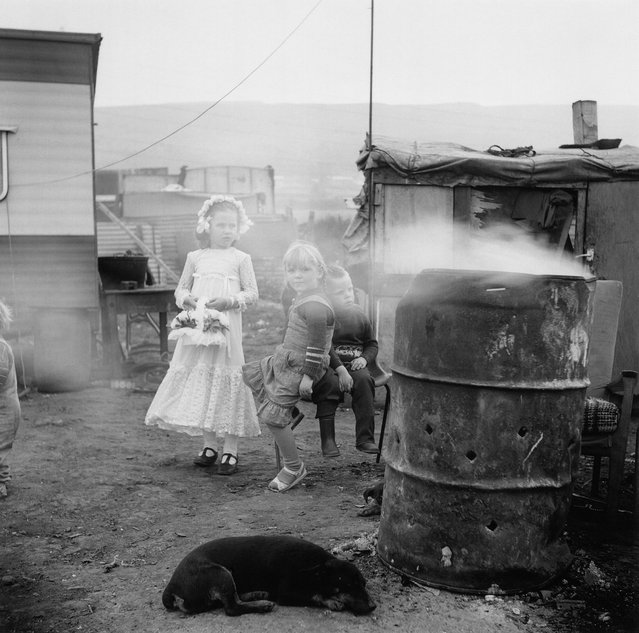 Belfast, Northern Ireland, 1986. Gypsy bridesmaid on her sister’s wedding day. Donovan Wiley writes: “I remember framing this image through the finder and feeling it was just magic, and praying the shutter release would work. I was inside the picture and gently pressed the shutter release; I heard the click – it worked, but there were many moments when it didn’t work, and I remember them fondly”. (Photo by Donovan Wylie/Magnum Photos) 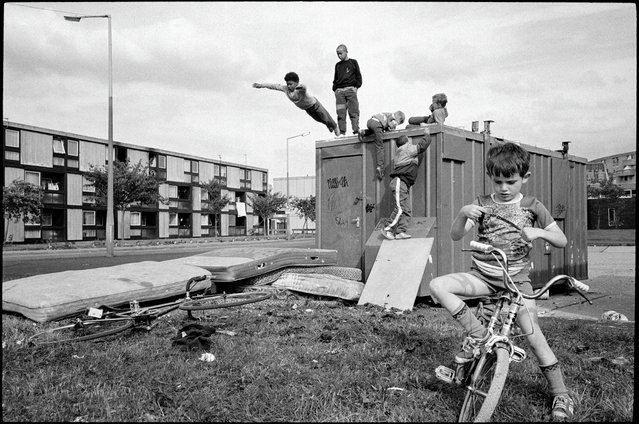 Moss Side estate, Manchester, England, 1986. Children at play. Stuart Franklin writes: “The decisive moment, when you think about it, is a one-dimensional concept. It deals with time or timing ... This includes the decisive composition, geometry, quality of light and subject. This picture chimes with the larger meaning and the spirit of Cartier-Bresson’s influence on me. I took two or three rolls of film of this scene as it unfolded, but there is only one picture that works, where all the elements come together: timing, composition, geometry and the situation as I wanted to remember it”. (Photo by Stuart Franklin/Magnum Photos) 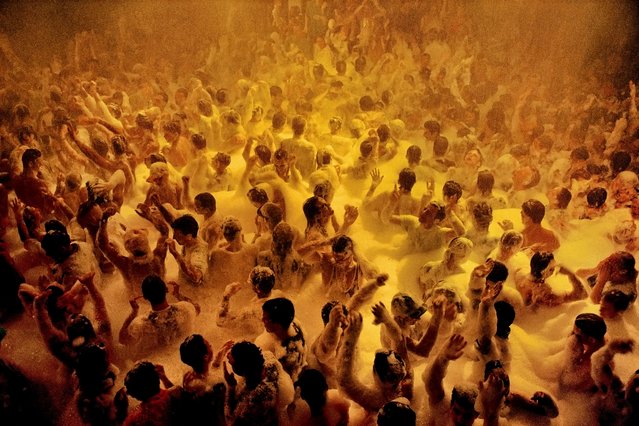 Ibiza, Spain, 1991. Soap suds dance party. David Alan Harvey writes: “The decisive moment can take a lot of clock time. This particular decisive moment took two weeks. The summer foam party at the club Amnesia in Ibiza only happens once per week ... I thought getting above it would be better to get the feeling of mass hedonism or like Dante’s Inferno ... In the end I shot one Kodachrome film frame that looks like this. The club lights flashed multiple colours at random and only this one had the feel and tone I wanted. Two weeks of time literally down to two seconds of opportunity. Worth it all”. (Photo by David Alan Harvey/Magnum Photos) 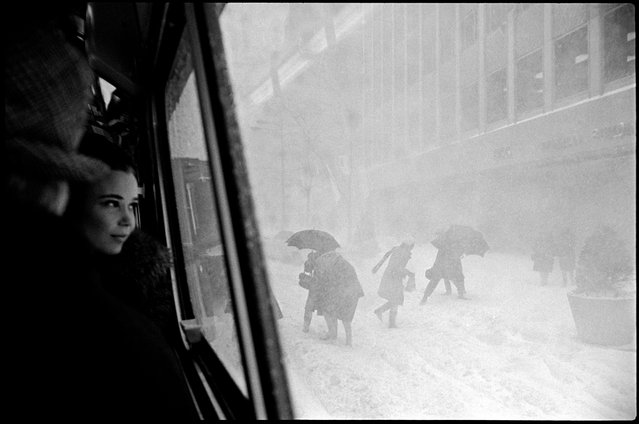 New York City, USA, 1967. Girl in bus and figures in street during snowstorm. Ruth, Erich Hartmann’s widow, writes: “Perhaps this picture should be described not as a ‘decisive moment’, but as a ‘unique moment’ ... It is unlikely that ever again on a winter’s day in New York would that same young woman be sitting in a bus near enough to where Erich was standing for him to take a picture of her that also included within the frame a well-spaced group of passengers outside struggling against the storm, some entering the bus from the snow-filled street, others leaving to face the wind and the cold”. (Photo by Erich Hartmann/Magnum Photos) 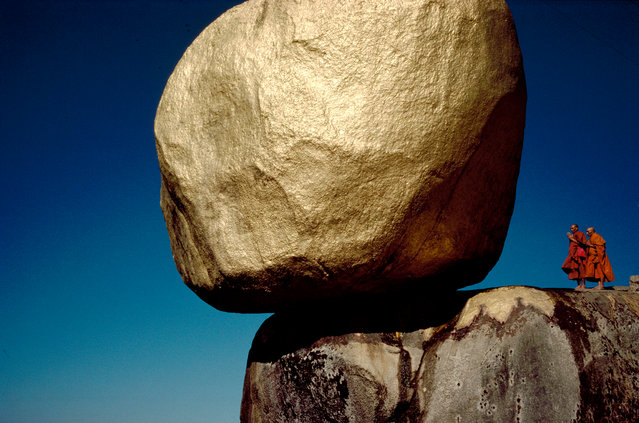 Kyaiktiyo, Burma, 1978. The Golden Rock at Shwe Pyi Daw (the Golden Country), the Buddhist holy place. Hiroji Kubota writes: “I was desperate to keep a distance from America for a while; luckily, I found Burma and its gentle and compassionate people. In the spring of 1978, on the top of the hill where I took this photo, I had two Leica bodies: the one with Tri-X and the other with Kodachrome 64. Soon after, I realised that the colour one looked very colourful and was more powerful. That was my decisive moment, to become a colour photographer”. (Photo by Hiroji Kubota/Magnum Photos) 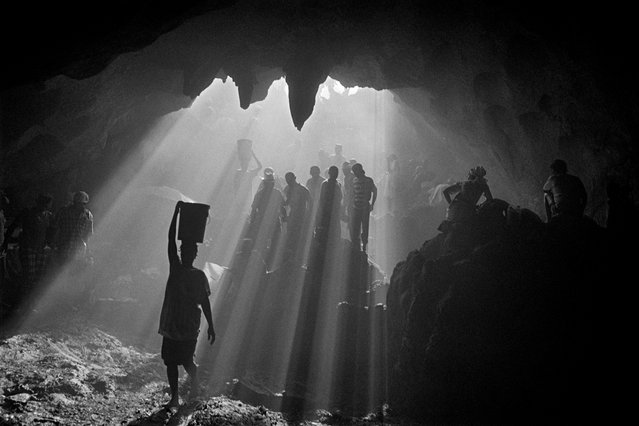 Artibonite region, Haiti, 2001. Saint Francis of Assisi’s cave. Cristina Garcia Rodero writes: “It’s that magical moment of kismet when space, time, wisdom and heart mingle and produce a unique photograph full of expression; where composition, timing, experience and emotion come together perfectly to create this sparkle of an image full of life and soul. Here, the rays of light of the sunset illuminate the darkness of the cave, caressing the bodies of pilgrims and defining their silhouettes in a harmony of faith and nature”. (Photo by Cristina Garcia Rodero/Magnum Photos) 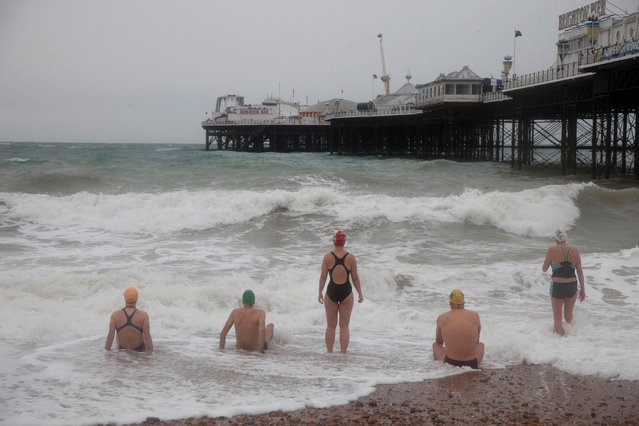 Brighton, England, 2010. Members of the Sea Swimming Club, who meet daily. Martin Parr writes: “This is the swimming club in Brighton, who go and swim in the sea every day of the year, regardless of the weather (wet suits are discouraged). You can see, here, the waves were so fierce they were experiencing their own ‘Decisive Moment’, as they pondered if they dare go into the sea or not. They did eventually sneak in, but a long leisurely dip was not on the cards that particular day”. (Photo by Martin Parr/Magnum Photos) 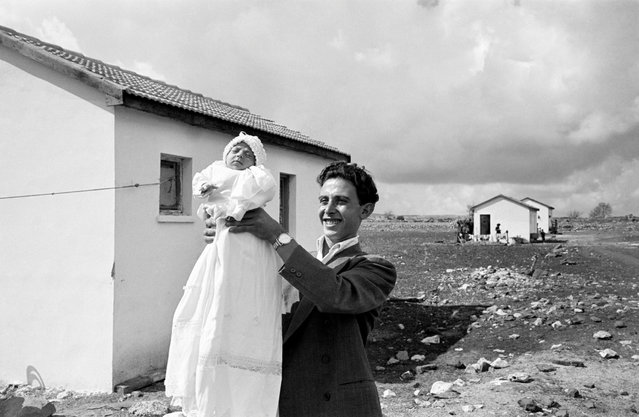 Israel, 1951. First child born in the settlement of Alma. David Seymour’s nephew, Ben Shneiderman, writes: “The joyous feelings for this first newborn in the settlement of Alma (established by a group of Italian converts to Judaism) in 1951 must have been especially strong in young Israel. Israel was itself a newborn nation, still recovering from the trauma of World War II... The white dress for daughter Miriam echoes the whitewashed new buildings behind her and the billowing clouds above. Viewers of this photo can easily assume that Chim was equally proud of the youthful spirit of Israel”. (Photo by David Seymour/Magnum Photos) 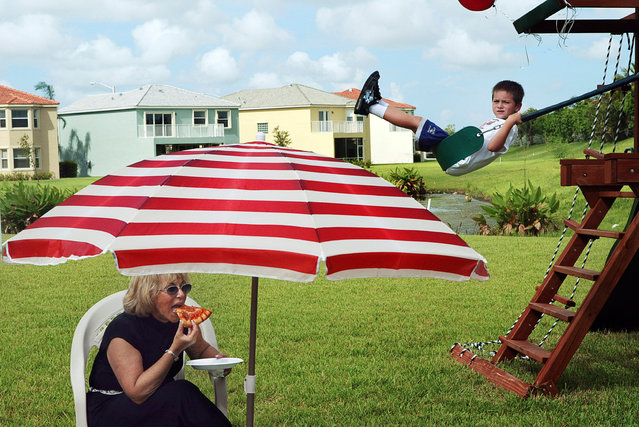 Wellington, Florida, USA, 2005. Birthday party at Olympia, a gated community. Carolyn Drake writes: “It puts me in the shoes of myself before I moved abroad in my 30s, just starting my career as a photographer. Having returned to make new images after almost a decade away, it begs me to consider how I’ve changed, how my perceptions of this country have changed, and how image making has changed ... I was at a birthday party in a gated community in Florida. I framed the image to see the two people’s separate intersecting at once”. (Photo by Carolyn Drake/Magnum Photos) 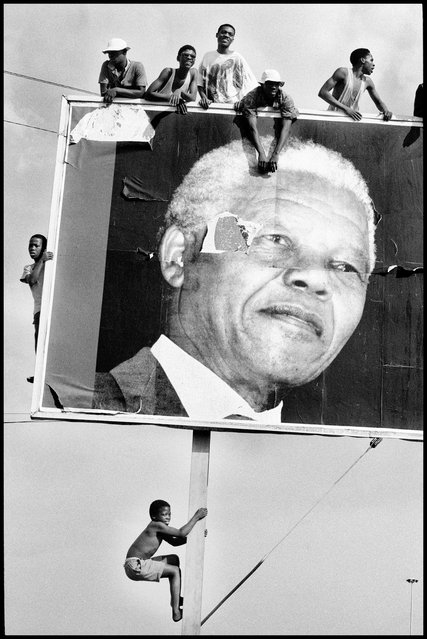 Lamontville, Natal, South Africa, 1994. Supporters climb to every vantage point whilst awaiting the arrival of Nelson Mandela. Ian Berry writes: “I went to South Africa three weeks before the election that everybody anticipated would bring the ANC and Mandela to power. Even this long before, my press accreditation was numbered over 300 ... Although, thousands of images later, I managed to get to him exclusively, this picture, perhaps not for me an HCB moment, best summed up the enthusiasm and support that Mandela invoked”. (Photo by Ian Berry/Magnum Photos) 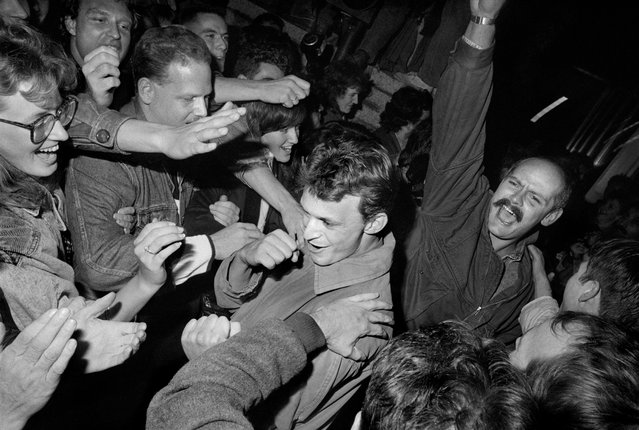 West Berlin, Germany, 9 November 1989. The fall of the Berlin Wall. Mark Power writes: “By a series of fortunate events I found myself in Berlin on the night the Wall (unexpectedly) opened. The story of how I came to be there at all is a long one, but fate dealt her cards and I was lucky ... But it was decisive on a personal level too: my derailed photographic career was put firmly back on track, and most success I’ve had since can be traced back to that one chilly night”. (Photo by Mark Power/Magnum Photos) 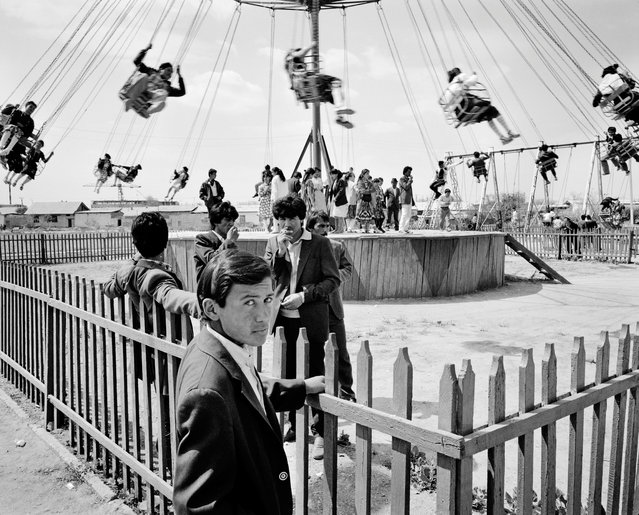 Urgench, Uzbekistan, 1 May 1989. Labour Day parade. Carl de Keyzer writes: “Timing is of the essence but a serious amount of good luck and a decent quality crystal ball are necessary”. (Photo by Carl De Keyze/Magnum Photos) 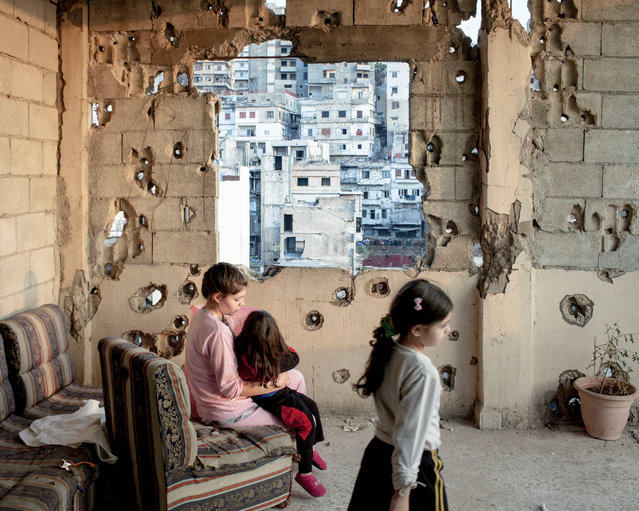 Tripoli, Lebanon, November 2013. War-torn homes. Lorenzo Meloni writes: “I spent more than a year in Tripoli’s Bab al-Tabbaneh district, documenting a politically fuelled sectarian conflict ... When I was leaving one apartment, I turned and saw the children on the chairs in front of the shattered wall; they seemed to perfectly sum up how families were living in the middle of conflict. With one foot already outside the door, I raised my camera and snapped. Photography, for me, is not really about carpe diem, but having the perseverance to be able to capture a moment that tells the wider story”. (Photo by Lorenzo Meloni/Magnum Photos) 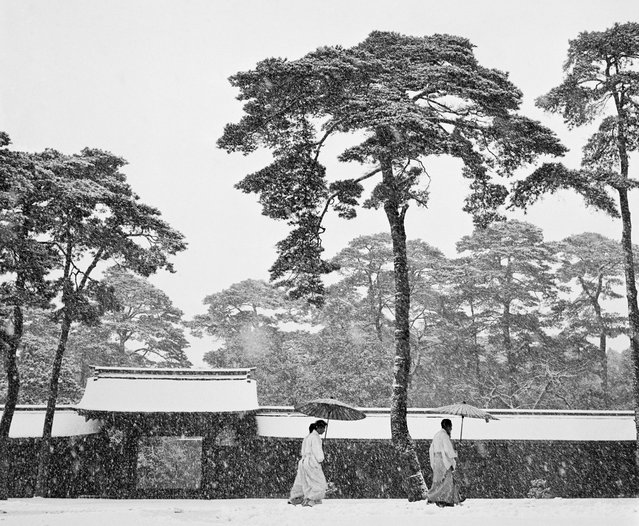 Tokyo, Japan, 1951. Courtyard of the Meiji shrine. Rosellina, Werner Bischof’s wife, wrote in her diary: “It is snowing today – Tokyo is enchanted – Werner and I visited the Meiji shrine in Tokyo. The mood is magical, the snowfall swallows the noise of the city. Everything appears just in black and white. Suddenly Werner runs away with his camera. I stop, terrified. What happened? He comes back after a little bit. Still out of breath but overjoyed he admits: I just took THE picture of Japan!”. (Photo by Werner Bischof/Magnum Photos)
Edit Del
10 Jun 2016 13:30:00, post received 0 comments
Publication archive:
←   →
Popular tags:
All tags
Last searches: