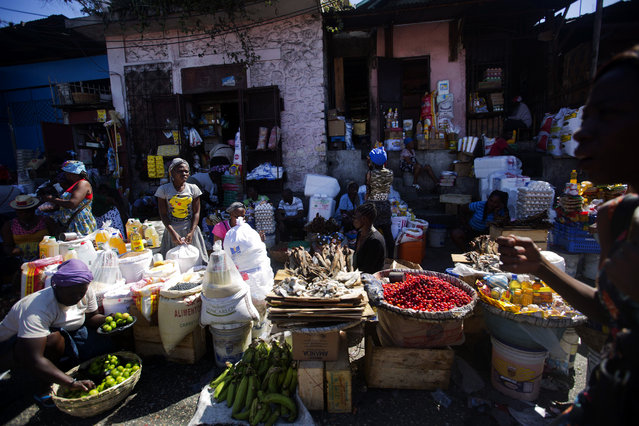 Vendors wait for clients at an open-air market in Port-au-Prince, Haiti, Monday, February 18, 2019. Businesses and government offices slowly reopened across Haiti on Monday after more than a week of violent demonstrations over prices that have doubled for food, gas and other basic goods in recent weeks and allegations of government corruption. (Photo by Dieu Nalio Chery/AP Photo) 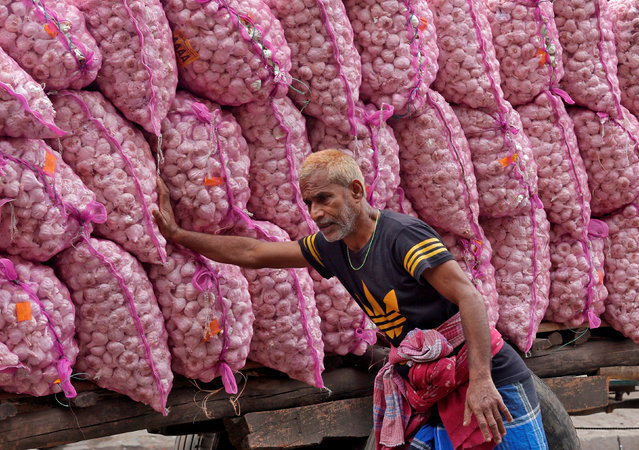 A labourer pushes a handcart loaded with garlic sacks at a wholesale market in Kolkata, India, January 28, 2019. (Photo by Rupak De Chowdhuri/Reuters) 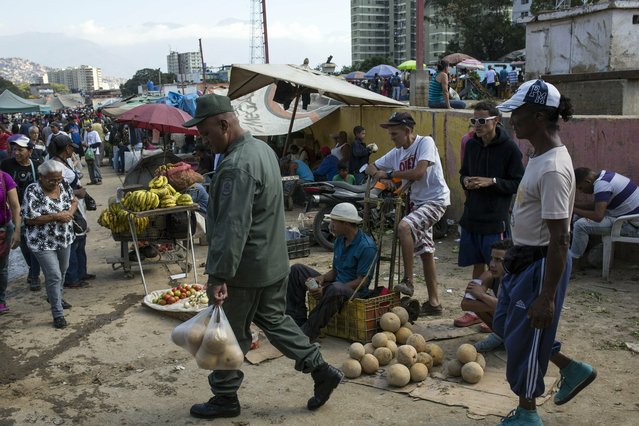 Workers and customers gather at a wholesale food market in Caracas, Venezuela, Monday, January 28, 2019. Economists agree that the longer the standoff between the U.S.-backed opposition leader Juan Guaido and President Nicolas Maduro drags on, the more regular Venezuelans are likely to suffer. (Photo by Rodrigo Abd/AP Photo) 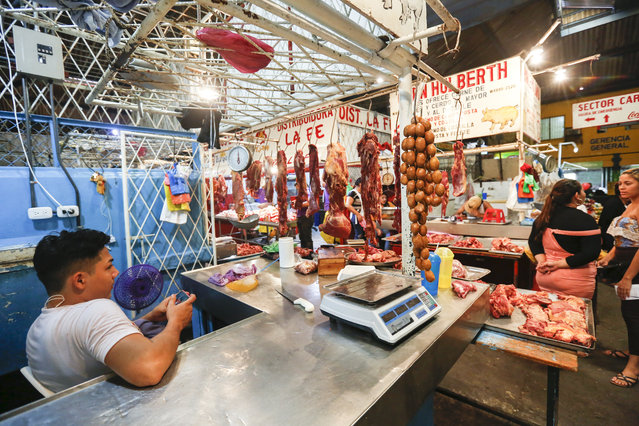 In this December 21, 2018 photo, a vendor waits for customers at a market in Managua, Nicaragua. In the streets of Managua, outward appearances suggest some degree of normality. But vendors say business has been running 25 to 30 percent below what it was last year, even in the run-up to Christmas. (Photo by Alfredo Zuniga/AP Photo) 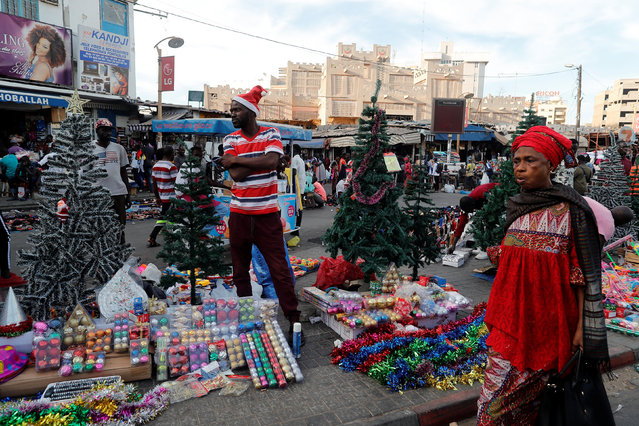 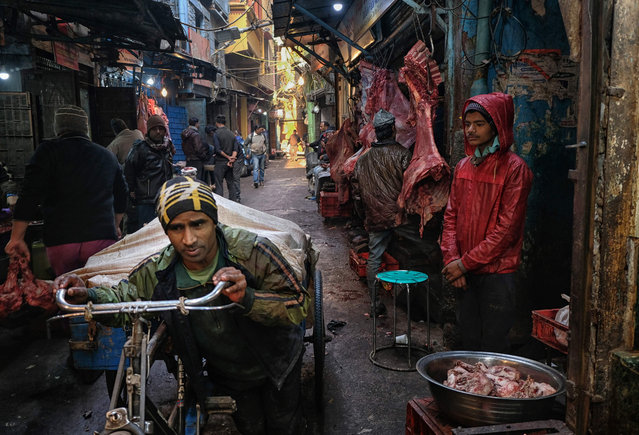 An Indian labourer pulls buffalo meat on his cycle-rickshaw as butchers wait for customers at a meat market in the old quarters of New Delhi on January 16, 2019. (Photo by Noemi Cassanelli/AFP Photo) 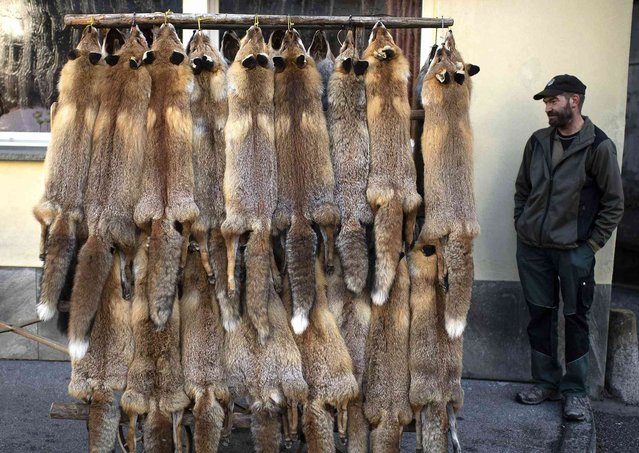 A hunter looks at fur at the traditional fur market of the hunter community of Grisons, on Saturday, March 16, 2019, in Thusis, Switzerland. (Photo by Gian Ehrenzeller/Keystone via AP Photo) 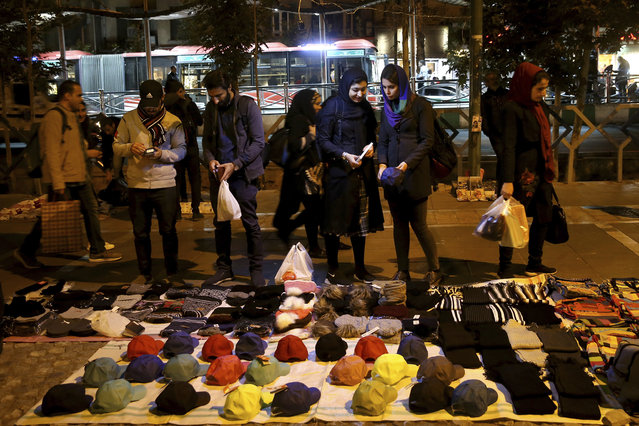 In this Monday, November 5, 2018, file photo, pedestrians look at items of a vendor in downtown Tehran, Iran. (Photo by Ebrahim Noroozi/AP Photo) 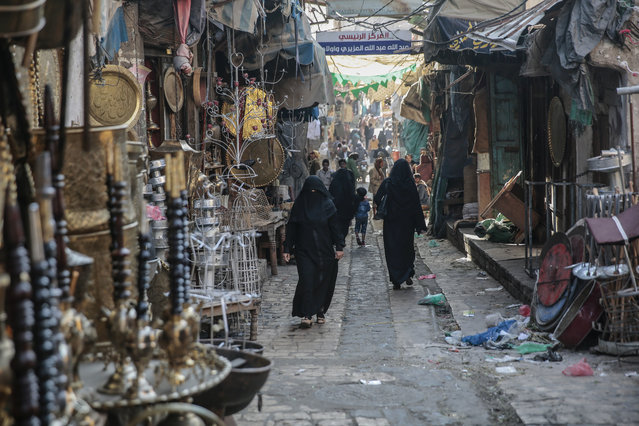 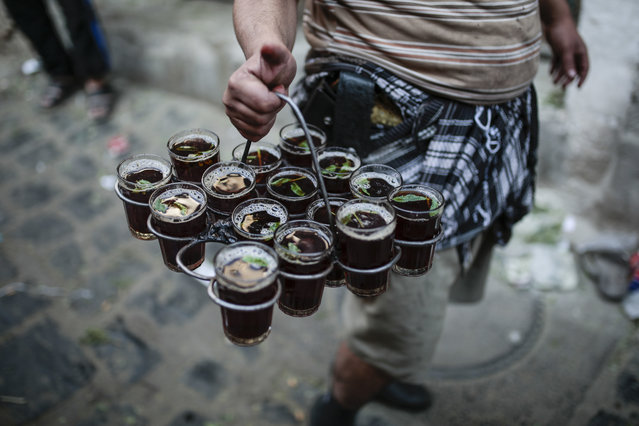 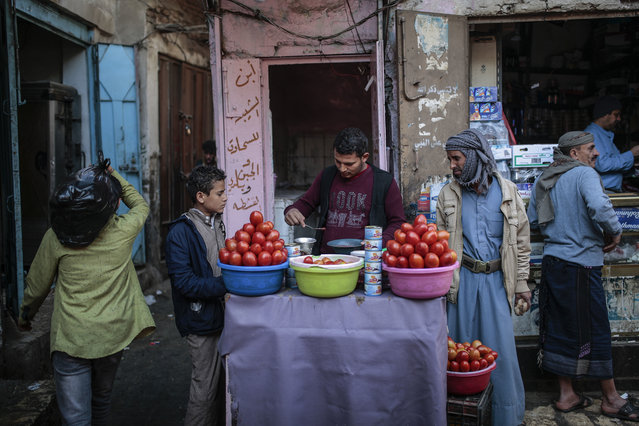 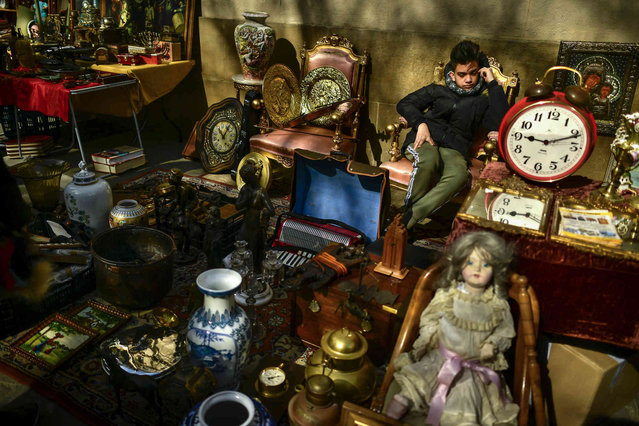 A young seller waits seated between antiques, in a corner of the old city, while people visit the antiques market “Pulgas' Market” in Pamplona northern Spain, Saturday, March 2, 2019. (Photo by Alvaro Barrientos/AP Photo) 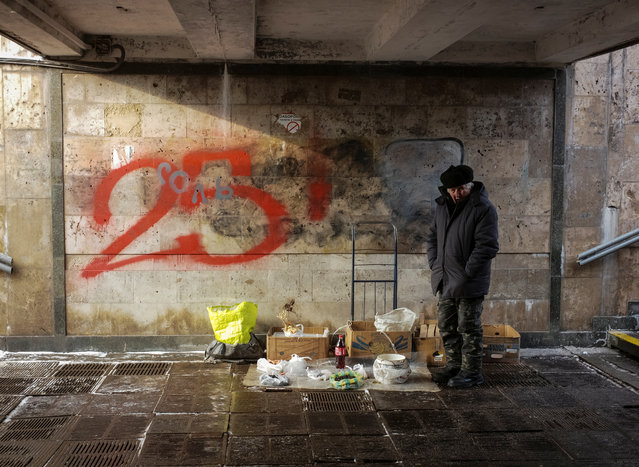 A man waits for customers as he sells home-made products on a winter day in an underpass in central Kiev, Ukraine on January 9, 2019. (Photo by Gleb Garanich/Reuters) 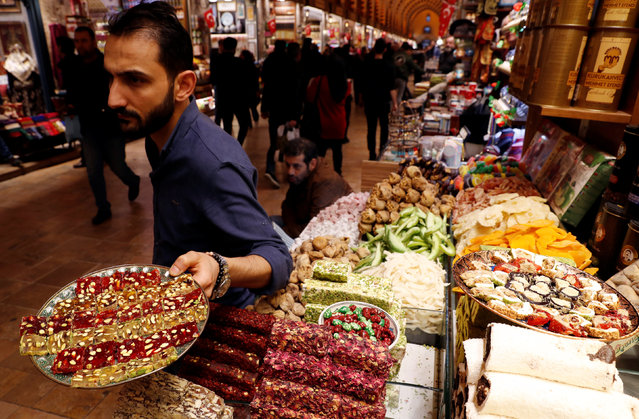 A vendor offers traditional Turkish sweets to tourists at the Spice market, also known as the Egyptian Bazaar, in Istanbul, Turkey on January 25, 2019. (Photo by Murad Sezer/Reuters) 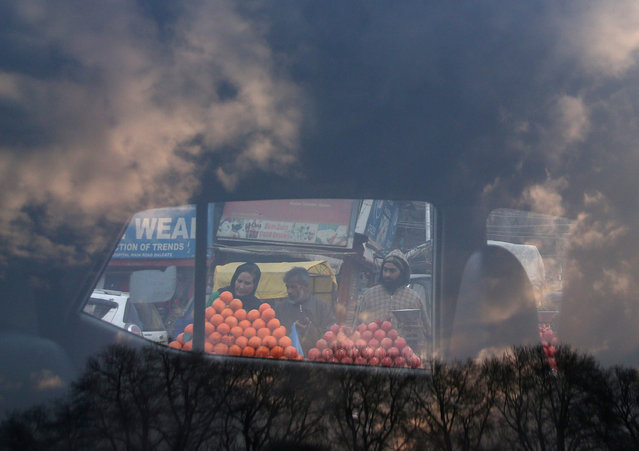 People buying fruits are seen through a window of a parked car at a market in Srinagar February 5, 2019. (Photo by Danish Ismail/Reuters) 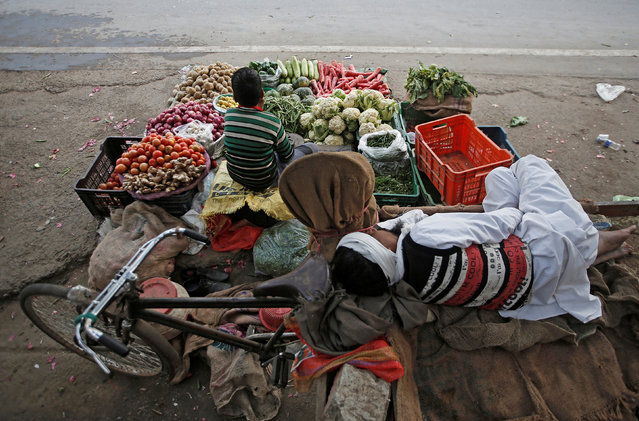 A vendor sleeps as his son waits for customers at their roadside vegetable shop in New Delhi, February 12, 2019. (Photo by Adnan Abidi/Reuters) 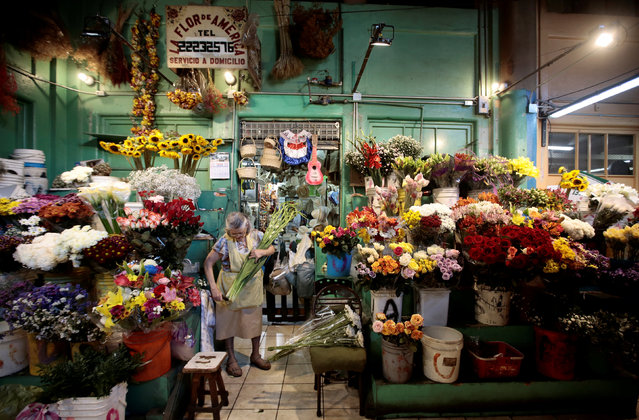 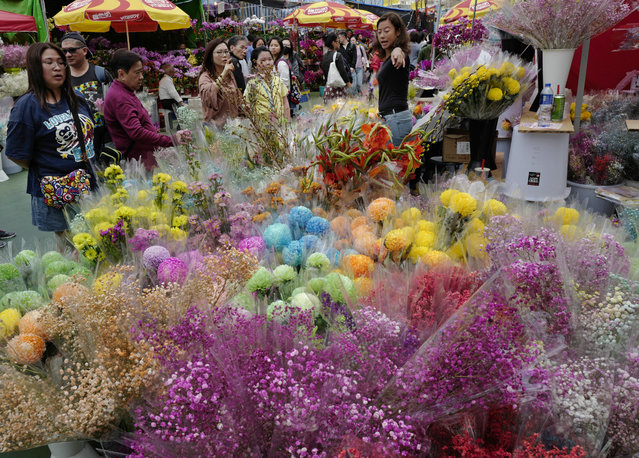 In this Monday, February 4, 2019, photo, people buy flowers at a New Year market in Hong Kong's Victoria Park. Chinese will celebrate the lunar new year on Feb. 5 this year which marks the Year of the Pig in the Chinese zodiac. (Photo by Vincent Yu/AP Photo) 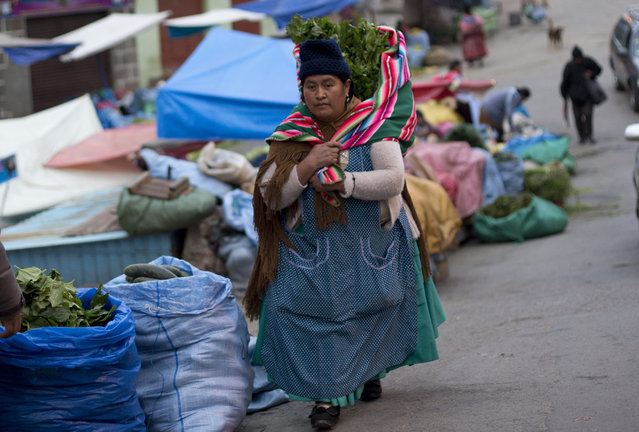 In this December 8, 2018 photo, a woman carries celery and parsley she just bought at a street market in La Paz, Bolivia. Because the capital lacks a waste water treatment plant, most of the produce at the city's markets are often contaminated due to being irrigated with sewage water. (Photo by Juan Karita/AP Photo) 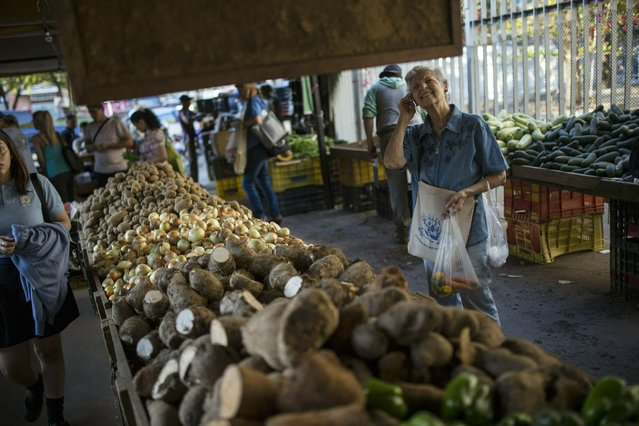 In this February 14, 2019 photo, a customer looks up at a price board at a farmers market in the middle-class district of Los Dos Caminos, in Caracas, Venezuela, in Caracas, Venezuela. Some Venezuelans manage to endure the nation’s economic meltdown by clinging to the shrinking number of well-paid jobs or by receiving some of the hundreds of millions of dollars sent home by friends and relatives abroad. (Photo by Rodrigo Abd/AP Photo) 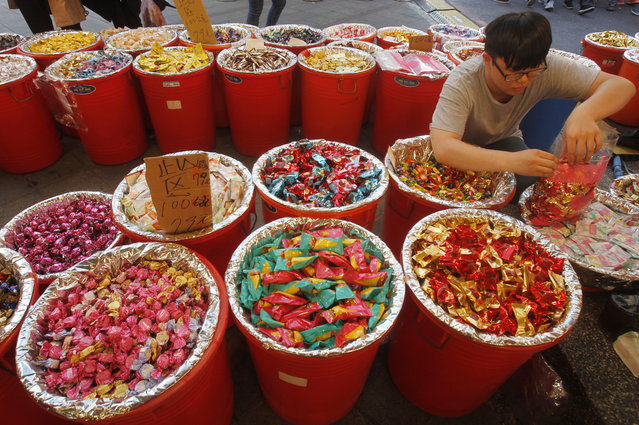 In this Tuesday, January 29, 2019, file photo, a vendor packs candies at the Dihua Street market in Taipei, Taiwan, Tuesday, Jan. 29, 2019. Taiwanese shoppers started hunting for delicacies, dried goods, and other bargains at the market ahead of the Lunar New Year celebrations which according to the lunar calendar will take place on Feb. 5. (Photo by Chiang Ying-ying/AP Photo)

Mannequin heads with beanies are placed on a table as a young girl looks at goods for sale on a sidewalk Tuesday, November 27, 2018, in Los Angeles. They seem to be everywhere on the streets of Los Angeles – pushcarts and tables filled with everything from hot dogs and tamales to toys and tools. Such sales are illegal, although the law is rarely enforced. Now, after a decade of debate and compromise, the Los Angeles City Council will consider an ordinance Wednesday that would grant permits to sidewalk vendors. (Photo by Jae C. Hong/AP Photo) 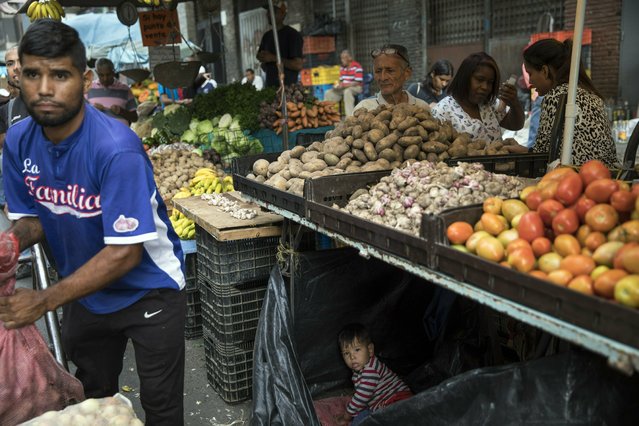 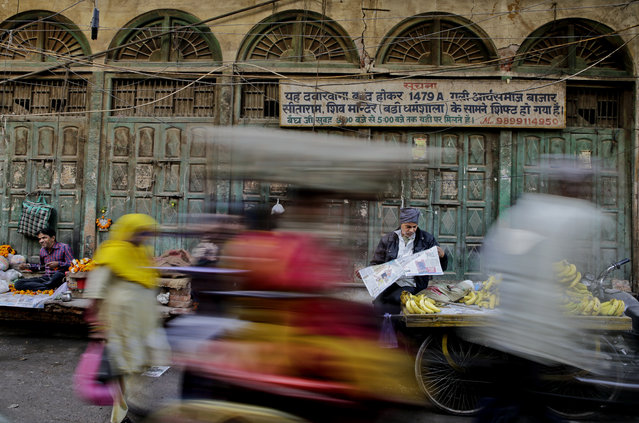 Pedestrians walk past a banana vendor reading a newspaper in a market in the old part of New Delhi, India, Saturday, December 1, 2018. Old Delhi despite being extremely crowded and dilapidated still serves as the symbolic heart of the city. (Photo by Altaf Qadri/AP Photo) 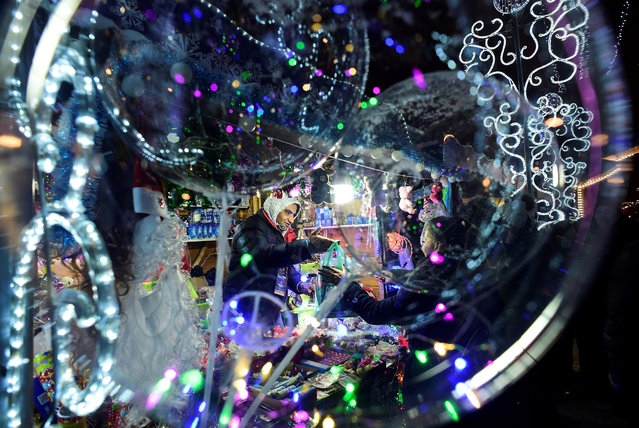