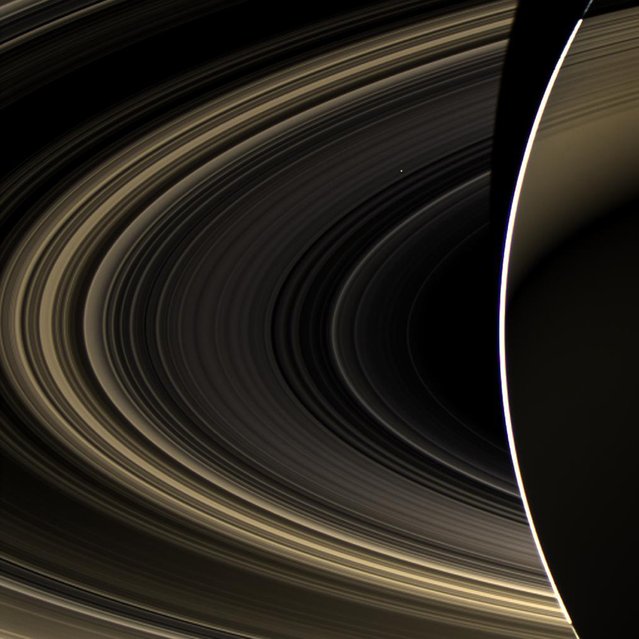 An image from NASA's Cassini orbiter shows Saturn and its rings, with the planet Venus shining as a white speck just above and to the right of the image's center. The picture was captured by Cassini's wide-angle camera on November 10, 2012, and released on March 4. (Photo by NASA/JPL-Caltech/Space Science Institute via AFP Photo) A long-exposure photo shows stars whirling above the Mars Desert Research Station, outside Hanksville in the Utah desert, on March 2. Volunteer crews use the research station to try out the tools and techniques that could be employed during a future human mission to the Red Planet. (Photo by Jim Urquhart/Reuters) 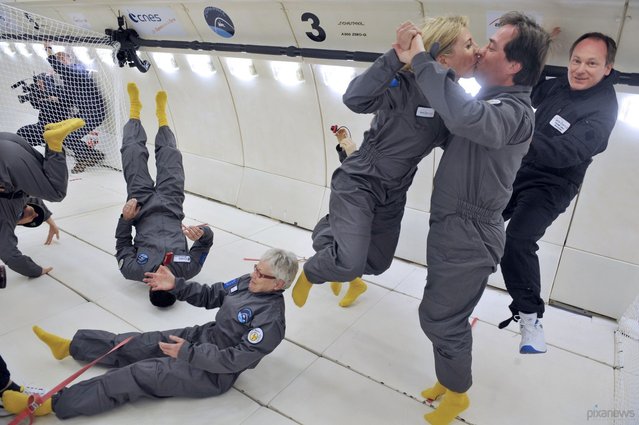 Civilian passengers in an Airbus A330 Zero-G jet enjoy moments of weightlessness on March 15, 2013 during the first zero-gravity airplane flight for paying passengers in France. All of the available slots for 2013 and 2014 were sold out, at a cost of 6,000 euros per person. The airplane ride simulates the microgravity of orbital space missions by going through parabolic flight maneuvers that counter the force of gravity. (Photo by Mehdi Fedouach/AFP Photo) 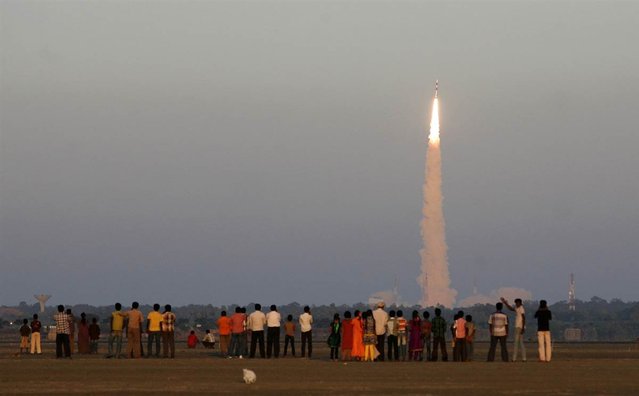 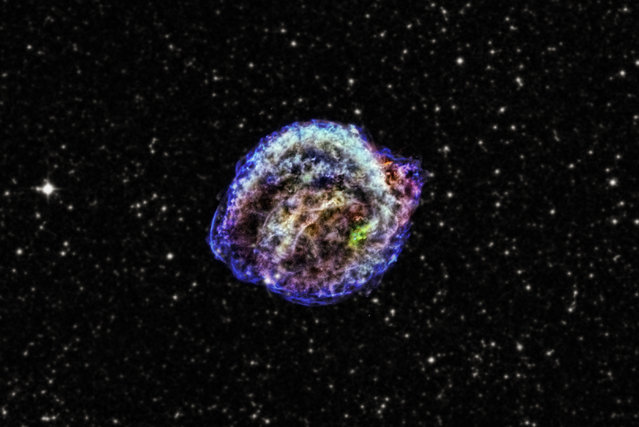 This supernova, discovered in 1604 by Johannes Kepler, belongs to an important class of objects that are used to measure the rate of expansion of the universe, known as Type 1a supernovae. The view you see here, released March 18, 2013 was produced using data from NASA's Chandra X-ray Observatory as well as infrared and optical imagery. The Chandra X-ray observations led astronomers to conclude that the supernova was triggered by interaction between a white dwarf and a red giant star. (Photo by CXC/NASA/JPL-Caltech) 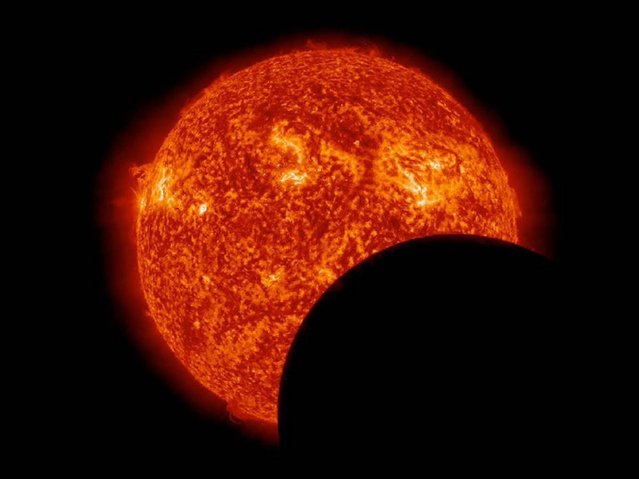 NASA's Solar Dynamics Observatory caught this view of the moon crossing in front of the sun on March 11, 2013. The transit took place during the sun-observing probe's semiannual eclipse season, a period of three weeks when SDO's view of the sun is occasionally blocked by Earth or the moon. (Photo by NASA via EPA) 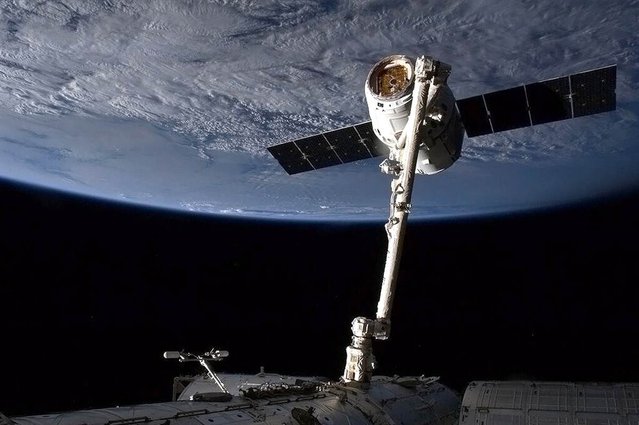 SpaceX's Dragon cargo capsule is snared by the International Space Station's robotic arm in preparation for its berthing on March 3, 2013. The unmanned capsule delivered hundreds of pounds of supplies, and brought more than a ton of cargo back to Earth on March 26. (Photo by Chris Hadfield/CSA via AFP Photo) 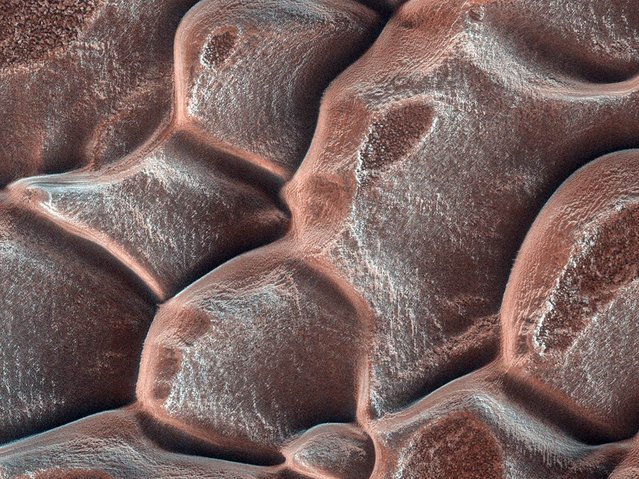 Martian sand dunes in a honeycomb pattern are covered with carbon dioxide frost in this picture from NASA's Mars Reconnaissance Orbiter. The image was acquired on Sept. 14, 2011, and made public on March 20, 2013. (Photo by NASA/JPL/University of Arizona) 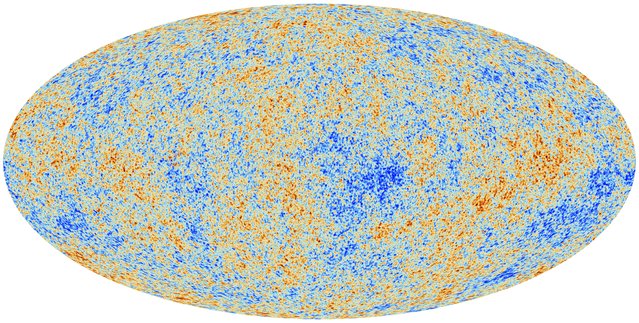 An all-sky image from the European Space Agency's Planck spacecraft, released March 21, 2013 provides the most detailed look yet at the imprint left behind by the big bang in the cosmic microwave background. Patterns of temperature fluctuations, shown in shades of red and blue, serve as a “baby picture” of the universe when it was just 370,000 years old. The image suggests that the universe is 100 million years older than scientists thought it was, with more matter and less dark energy than they previously thought. (Photo by ESA-­Planck Collaboration via AP Photo) 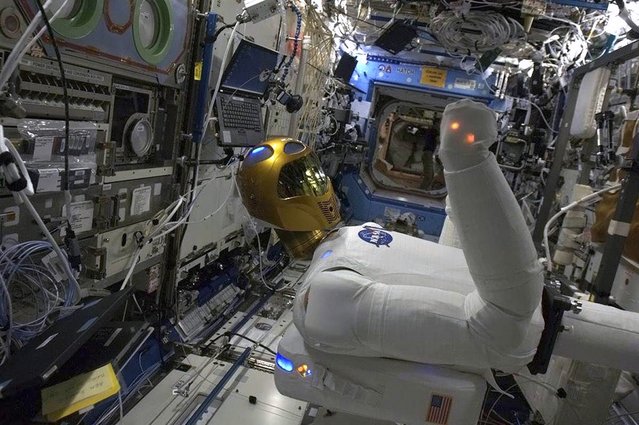 NASA's Robonaut 2, the first humanoid robot in space, is put through its paces aboard the International Space Station, as seen in a photo sent by Canadian astronaut Chris Hadfield on March 18, 2013. Robonaut was designed with the intention of eventually taking over tasks deemed too dangerous or mundane for astronauts. “It will be even more interesting when his legs are installed”, Hadfield said. (Photo by Chris Hadfield/CSA via Reuters) 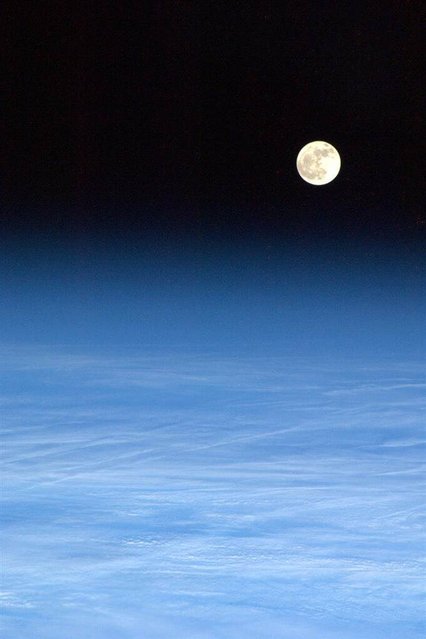 The moon rises over a light blanket of clouds in a March 4, 2013 photo taken from the International Space Station by Canadian astronaut Chris Hadfield. (Photo by Chris Hadfield/CSA via AFP Photo) 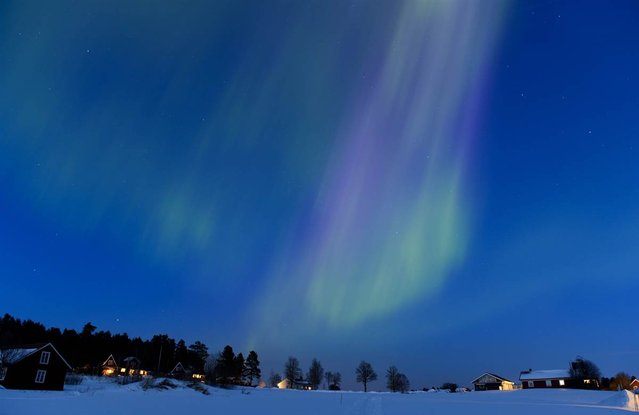 The northern lights shimmer at twilight on March 17, 2013, between the towns of Are and Ostersund in Sweden. (Photo by Jonathan Nackstrand/AFP Photo) 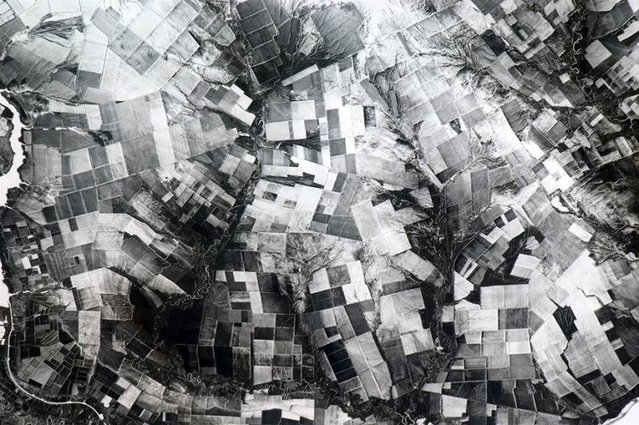 Snow-covered farmland in Central Asia looks like a complex patchwork when seen from the International Space Station. Canadian astronaut Chris Hadfield calls this picture “a monochromatic 3-D hallucination in the snow”. The photo was taken on February 25, 2013 and shared by Hadfield on March 14. (Photo by Chris Hadfield/CSA via Google+) 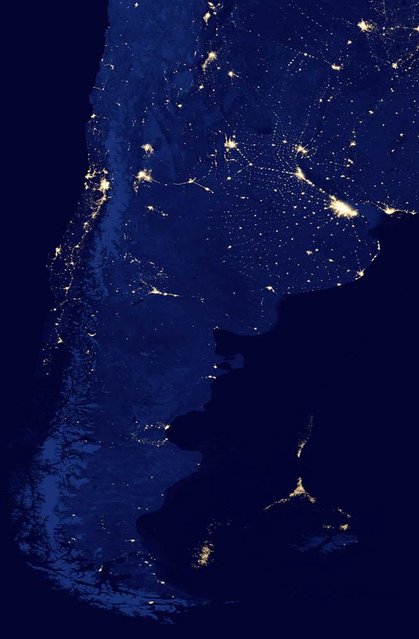 The southern tip of South America glitters at night in an image from the Suomi NPP satellite that was captured in April 2012 and made public on March 22, 2013. Off the coast, the lights of a huge fleet of shrimp boats can be seen, right along the maritime border that separates Argentina, the Falkland Islands and international waters. Scientists say this unmanaged fleet is threatening the South Atlantic marine ecosystem by depleting squid, which are key to a food chain that provides sustenance for penguins, seals, birds and whales. (Photo by NASA’s Suomi Polar-orbiting Partnership via AP) 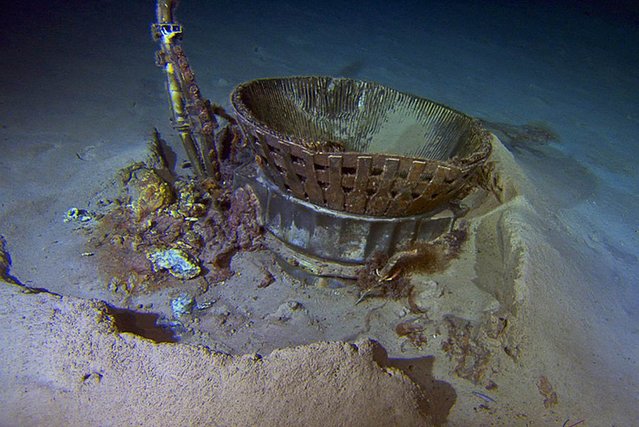 A photograph released by Bezos Expeditions on March 21 shows a thrust chamber from a Saturn 5 rocket's F-1 engine, sitting on the Atlantic Ocean bottom. Remotely operated vehicles recovered the engine components from a depth of 14,000 feet, decades after they plunged into the sea during the Apollo moon missions. The preserved engines eventually will go on display in museums in Washington, D.C., and Seattle. (Photo by Bezos Expeditions via EPA) 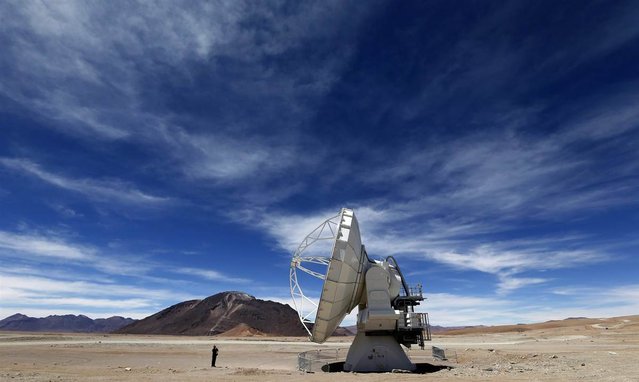