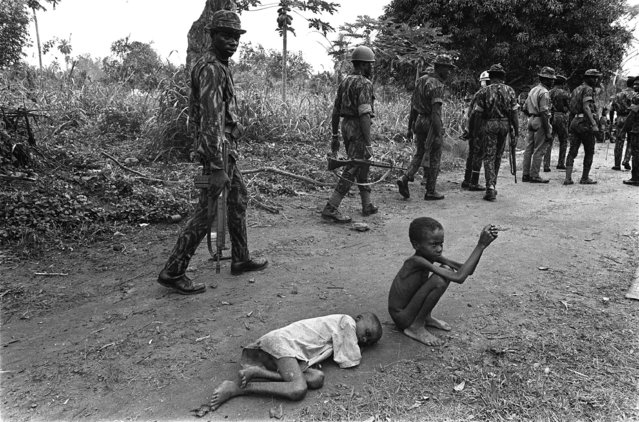 Federal Nigerian troops walk along a road near Ikot Expene, Nigeria, to the frontier with Biafra, a few miles away, October 13, 1968. On the roadside two emaciated Nigerian boys slowly die from starvation and malnutrition. (Photo by Dennis Lee Royle/AP Photo) 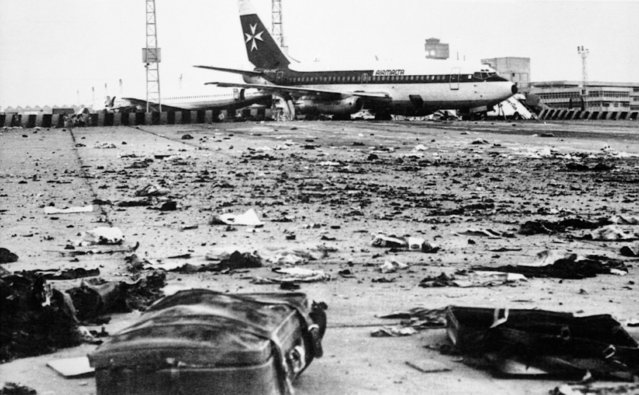 Pieces of suitcases and debris are scattered over the tarmac at Cairo international Airport, Egypt after two bombs that were in a suitcase exploded after being unloaded on October 13, 1981. The plane originated in Libya, with a stop over in Malta, before arriving in Cairo. (Photo by AP Photo/Donina) 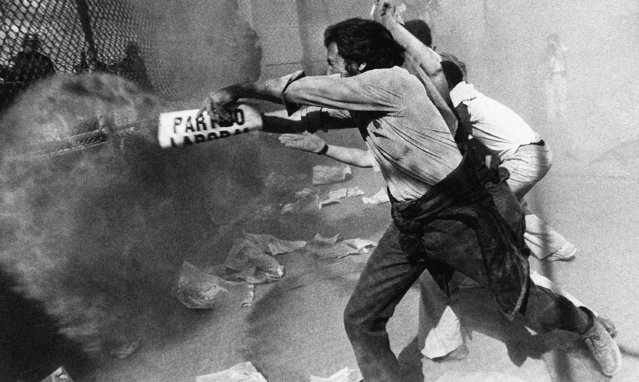 Anti-Nazi demonstrators throw dirt at a small group of Nazis who gathered for a rally in Walnut Creek, Calif., October 13, 1979. More than 800 persons demonstrated against the group of eight Nazis, including black militant Angela Davis. There were no injuries or arrests. (Photo by AP Photo) 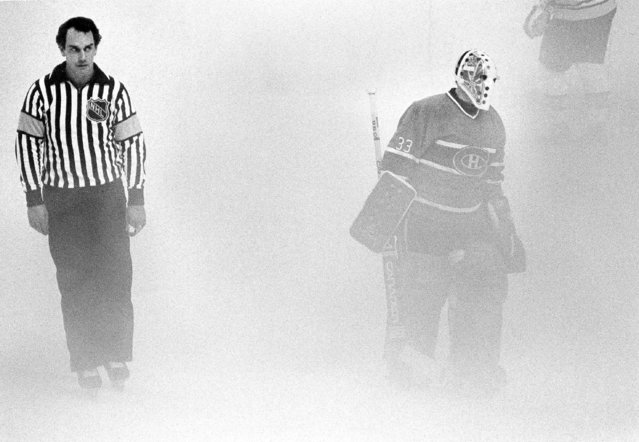 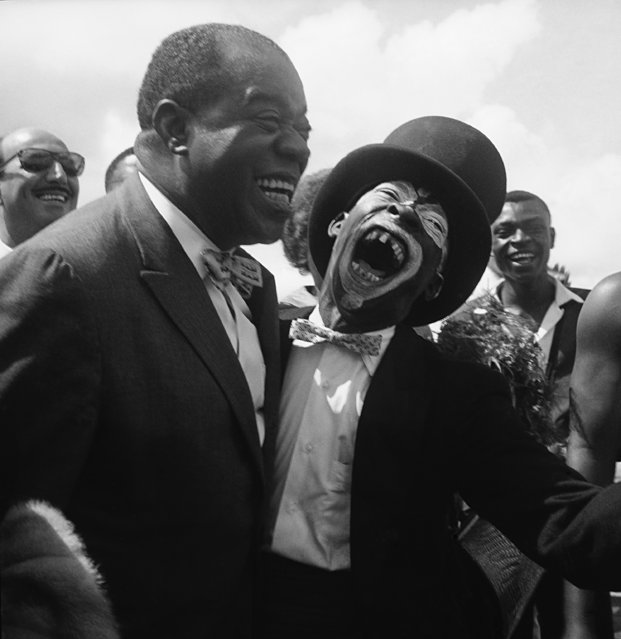 Louis Armstrong, noted jazz musician, gets a wide open greeting from Ajax Bukana, Ghana's leading jive dancer on arrival in Accra, Ghana on October 13, 1960. The top-hatted greeter was among a group which welcomed the visitor who is on a 35,000-mile concert tour of Africa. Armstrong and his band arrived in Lagos on October 18, and was given a boisterous welcome. (Photo by AP Photo) 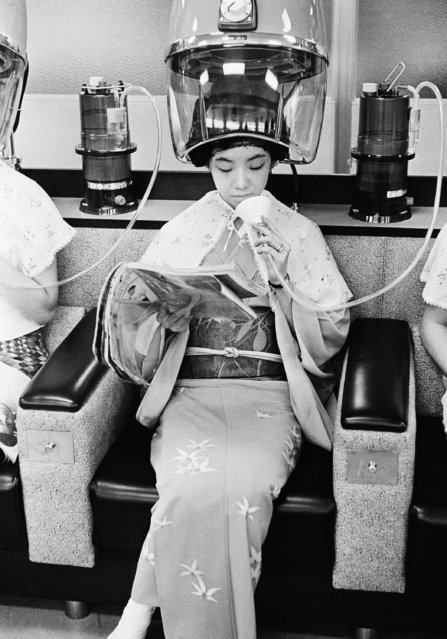 Japanese women inhale pure air from oxygen tanks at a Tokyo beauty shop while they sit under hair-driers, October 13, 1966, Tokyo, Japan. Several midget oxygen tanks are available so that customers can feel refreshed. The woman is unidentified. (Photo by AP Photo) 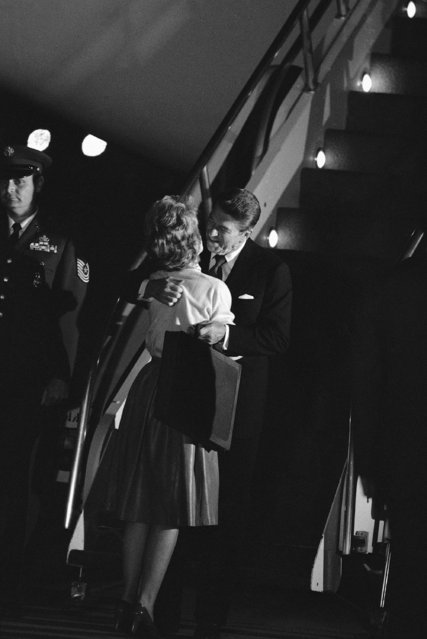 President Ronald Reagan greets First Lady Nancy Reagan at Andrews Air Force Base upon on October 13, 1984 in Maryland, his return from his whistle-stop train tour across Ohio Friday. Reagan and Nancy then left for Camp David for the weekend. (Photo by Scott Stewart/AP Photo) 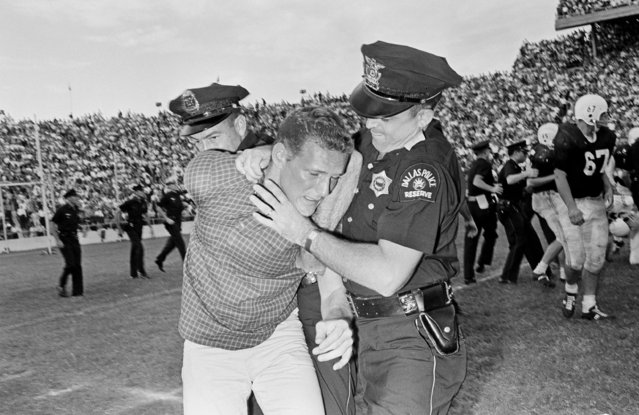 An unidentified Oklahoma fan is hustled off the playing field by two Dallas policeman in the last four seconds of play during the Oklahoma vs Texas football game in Dallas, October 13, 1962. The game almost erupted into a free-for-all fight just before the final whistle when members of both teams exchanged blows and spectators from both sides rushed onto the field. (Photo by Ferd Kaufman/AP Photo) 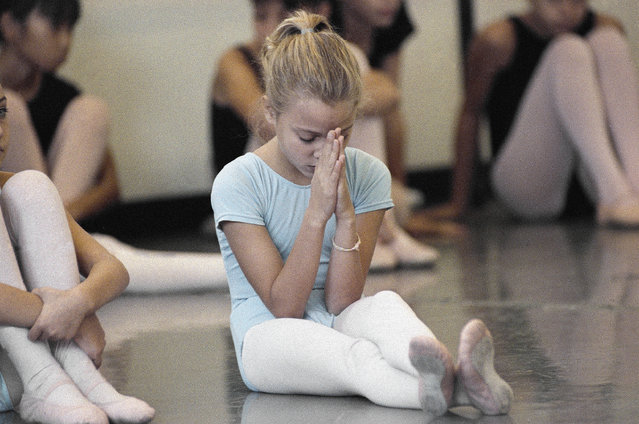 Students at the School of American Ballet in New York sit as they auditioned for roles as angels in "The Nutcracker", October 13, 1989. (Photo by Susan Ragan/AP Photo) 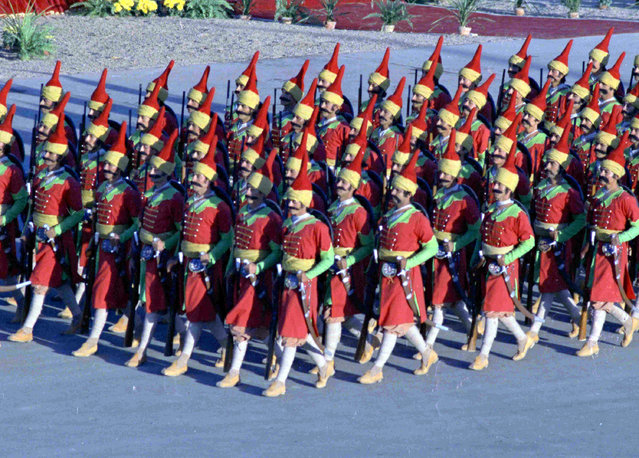 Iranian Army troops dressed as Persian warriors of the past, parade before a large gathering of the world's royalty and heads of state, at celebrations in Tehran, October 13, 1971, to mark the founding of the Persian Empire, 2,500 years ago. (Photo by AP Photo) 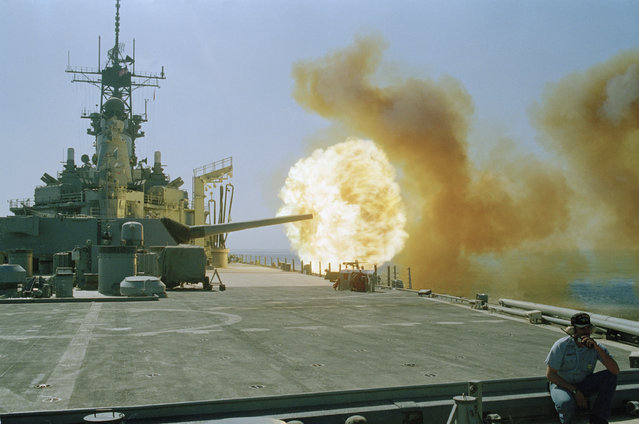 A fireball erupts from a 16-inch gun on the battleship USS Wisconsin during a live fire exercise in the Persian Gulf, October 13, 1990. The ship is in the Gulf as part of Operation Desert Shield. (Photo by John Gaps III/AP Photo) 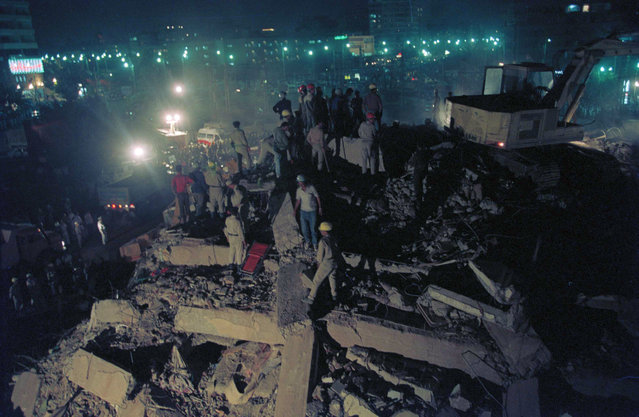 A rescue team works through the night at a collapsed building in the Cairo neighborhood of Heliopolis following the strong earthquake, October 13, 1992. Officials blamed many of the over 400 deaths and over 3,000 reported injuries in yesterday's quake on old, weak buildings and poorly constructed new ones, as well as panic stampedes. (Photo by Jerome Delay/AP Photo)
Edit Del
15 Oct 2015 08:04:00, post received 0 comments
Publication archive:
←   →
Popular tags:
All tags
Last searches: