Fact One Photo, One Country, One Year by Reuters, Part 2/5 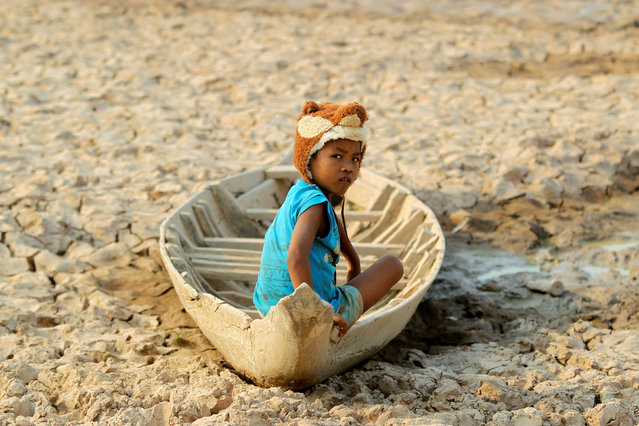 CAMBODIA: A girl sits on her boat at a Bak Angrout dried up pond at the drought-hit Kandal province in Cambodia May 13, 2016. (Photo by Samrang Pring/Reuters) 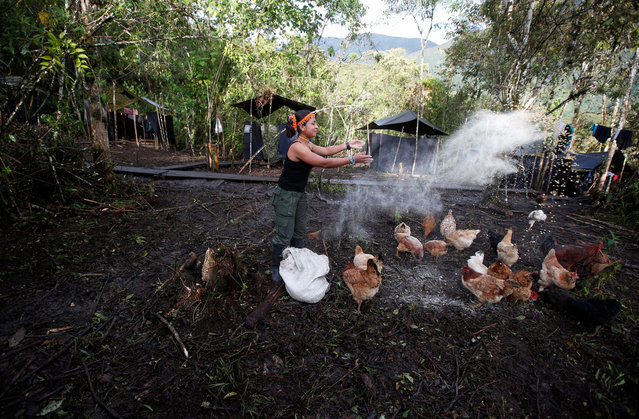 COLOMBIA: Patricia, a member of the 51st Front of the Revolutionary Armed Forces of Colombia (FARC), feeds chickens at a camp in Cordillera Oriental, Colombia, August 16, 2016. (Photo by John Vizcaino/Reuters) 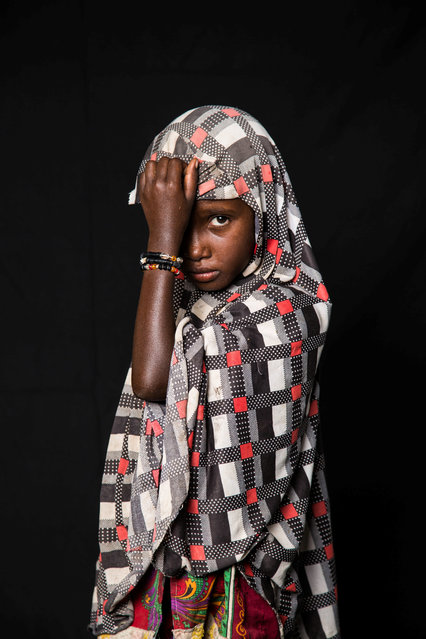 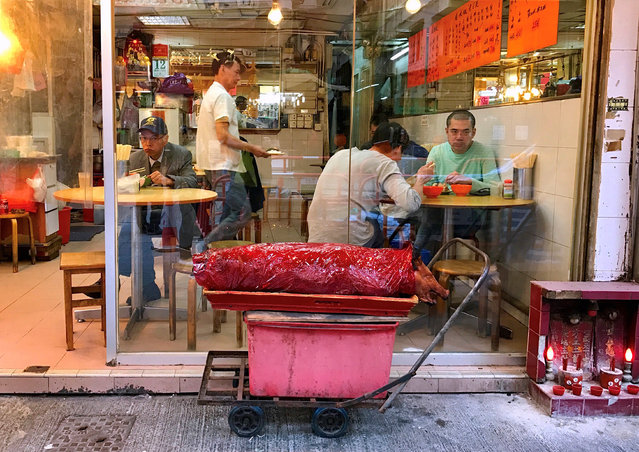 CHINA: Customers eat at a restaurant as a cooked pig sits on a cart on the street outside in Hong Kong, China, December 12, 2016. (Photo by David Gray/Reuters) 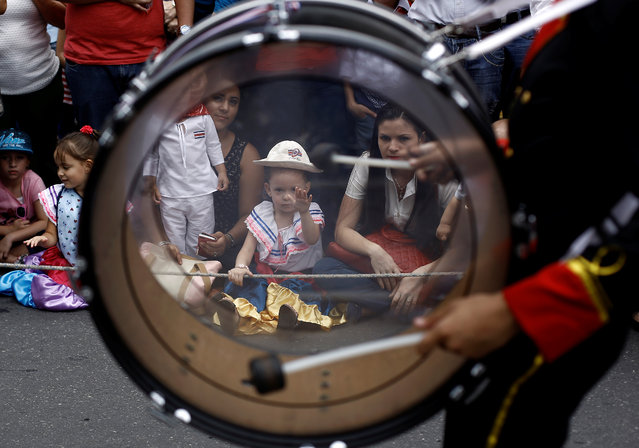 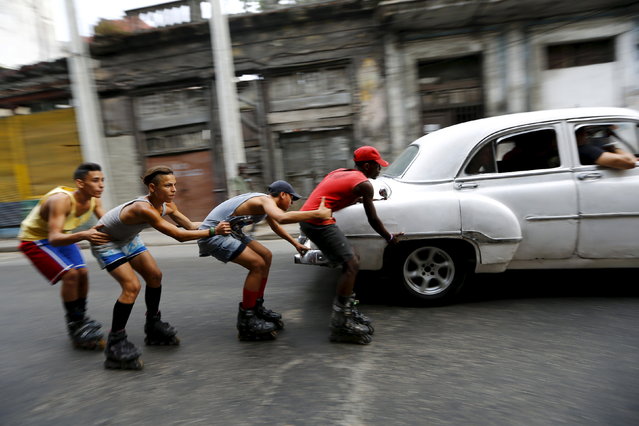 CUBA: Teenagers on roller skates hold on to each other as they are pulled by a vintage car to move along a street in Havana, Cuba March 19, 2016. (Photo by Ivan Alvarado/Reuters) 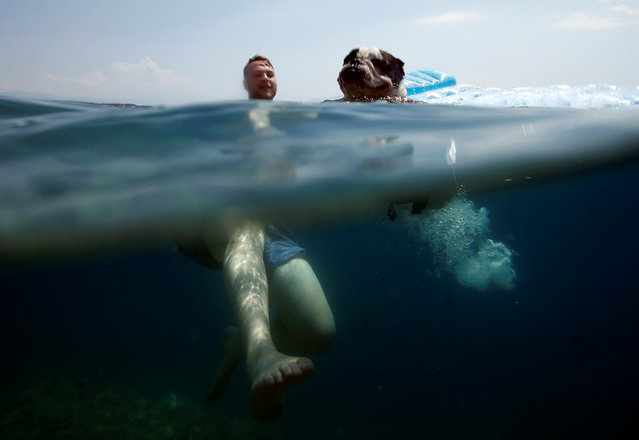 CROATIA: A man swims in the sea with his dog at dog beach and bar in Crikvenica, Croatia, July 12, 2016. The first Croatian beach bar specifically designed for dogs opens in the northern Adriatic town of Crikvenica, enabling canines and their owners to experience the joys of summertime together. Located at one of the few dog friendly beaches in the country, the bar's offer includes specially prepared ice cream, dog beer and snacks. (Photo by Antonio Bronic/Reuters) 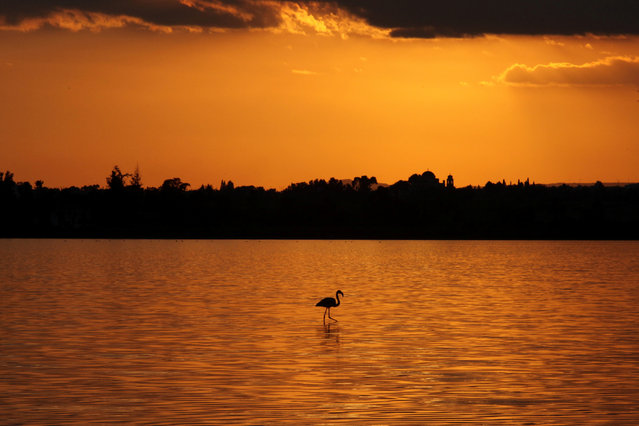 CYPRUS: A flamingo walks during the sunset in a salt lake in Larnaca, Cyprus December 11, 2016. (Photo by Yiannis Kourtoglou/Reuters) 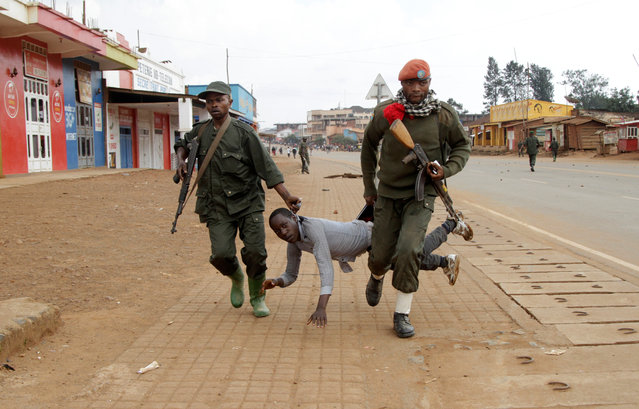 DEMOCRATIC REPUBLIC OF CONGO: Congolese soldiers arrest a civilian protesting against the government's failure to stop the killings and inter-ethnic tensions in the town of Butembo, in North Kivu province, Democratic Republic of Congo August 24, 2016. (Photo by Kenny Katombe/Reuters) 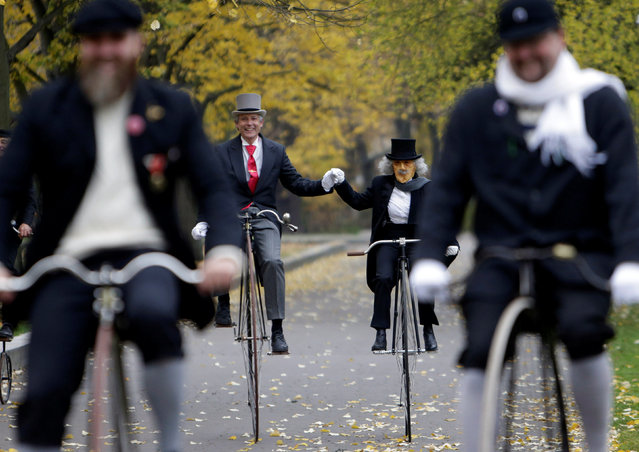 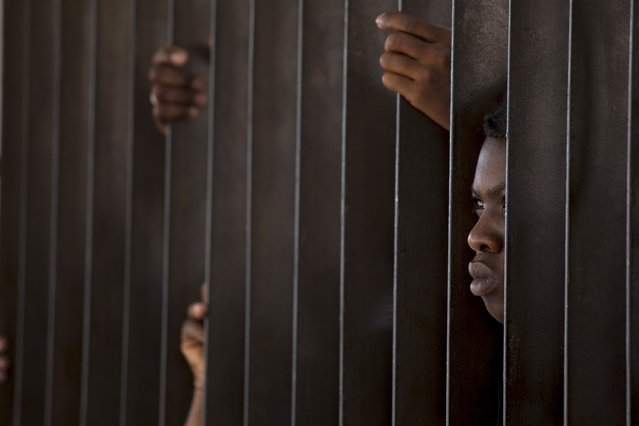 DOMINICAN REPUBLIC: A Haitian woman peeks through a fence surrounding the Ministry of Interior and Police while waiting to register in Santo Domingo, June 16, 2016. (Photo by Ricardo Rojas/Reuters) 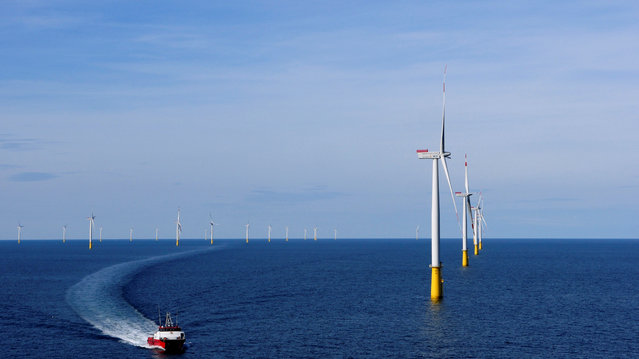 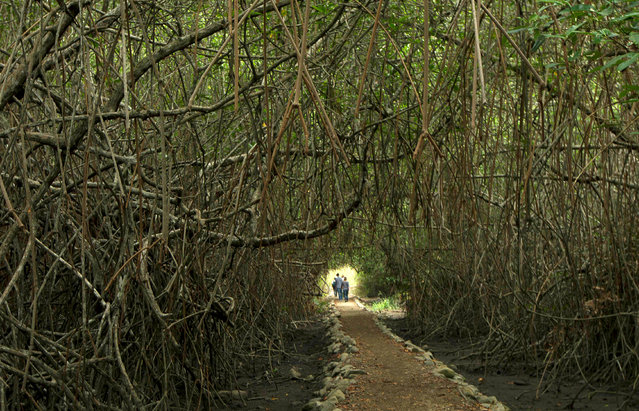 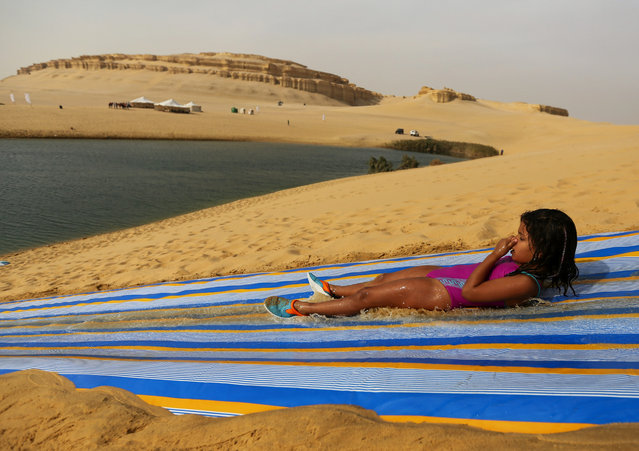 EGYPT: A girl slides down a ramp into the lake in Wadi el-Rayan Fayoum, Egypt, November 18, 2016. (Photo by Mohamed Abd El Ghany/Reuters) 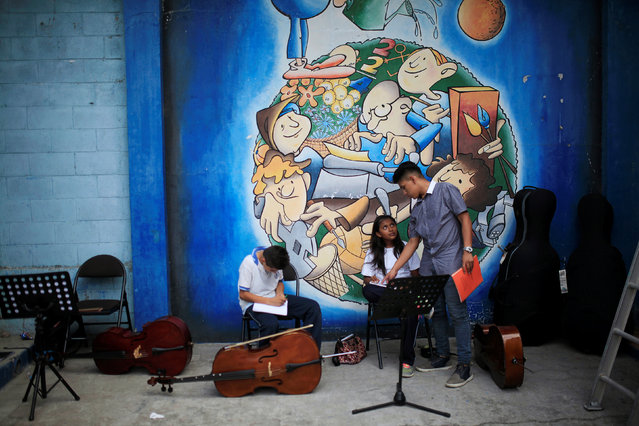 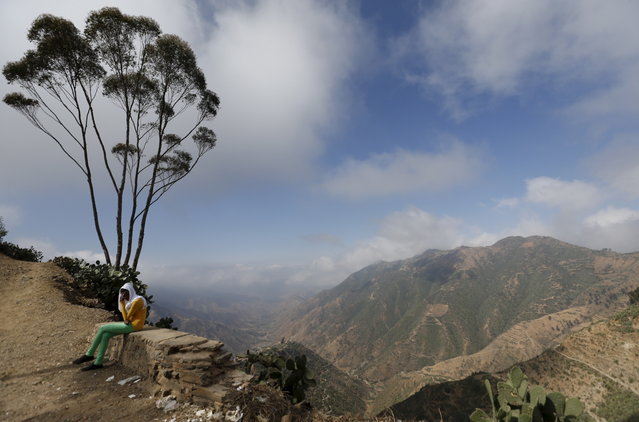 ERITREA: A woman sits next to an escarpment on the outskirts of Asmara, Eritrea, February 20, 2016. (Photo by Thomas Mukoya/Reuters) 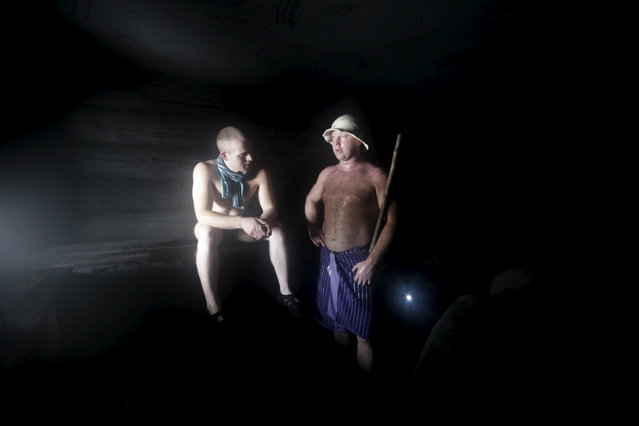 ESTONIA: People enjoy a sauna during the sauna marathon near Otepaa, Estonia, February 6, 2016. Participants have to track down and visit the given saunas in the Otepaa area as fast as possible. (Photo by Ints Kalnins/Reuters) 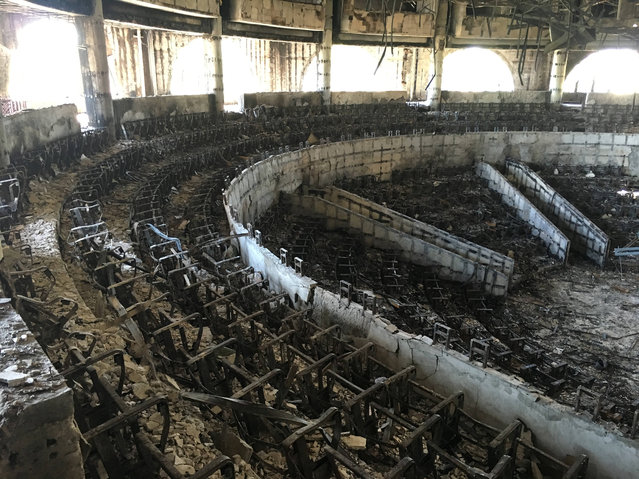 GABON: The charred interior of the parliament is seen after it was burned in post-election protests in Libreville, Gabon, September 20, 2016. (Photo by Edward McAllister/Reuters) 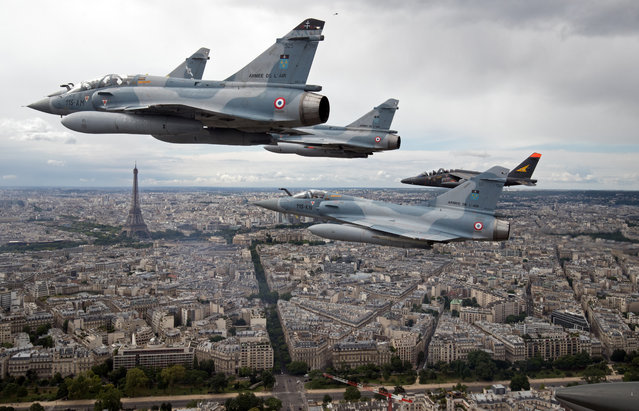 FRANCE: Four Mirage 2000C and one Alpha jet flight over Paris, France, on their way to participate in the Bastille Day military parade, July 14 2016. (Photo by Philippe Wojazer/Reuters) 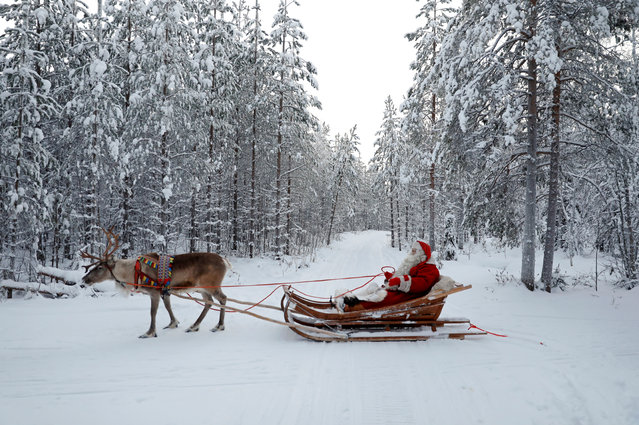 FINLAND: Santa Claus rides in his sleigh as he prepares for Christmas in the Arctic Circle near Rovaniemi, Finland December 15, 2016. (Photo by Pawel Kopczynski/Reuters) 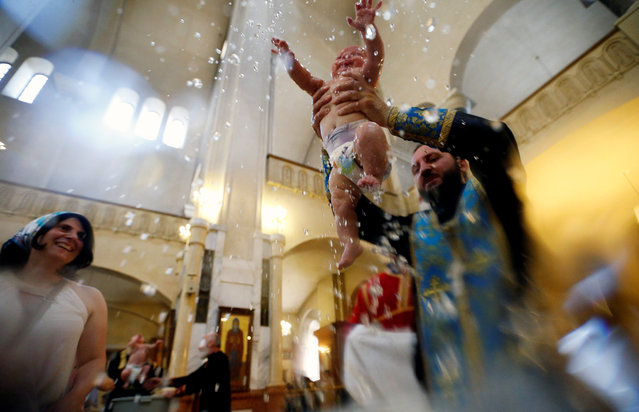 GEORGIA: A baby is baptized during a mass baptism ceremony at the Holy Trinity Cathedral in Tbilisi, Georgia July 13, 2016. (Photo by David Mdzinarishvili/Reuters) 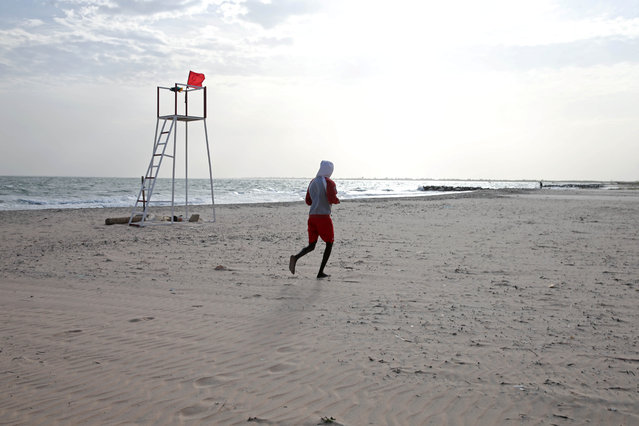 GAMBIA: A man jogs on the beach in Bakau, Gambia December 15, 2016. (Photo by Afolabi Sotunde/Reuters) 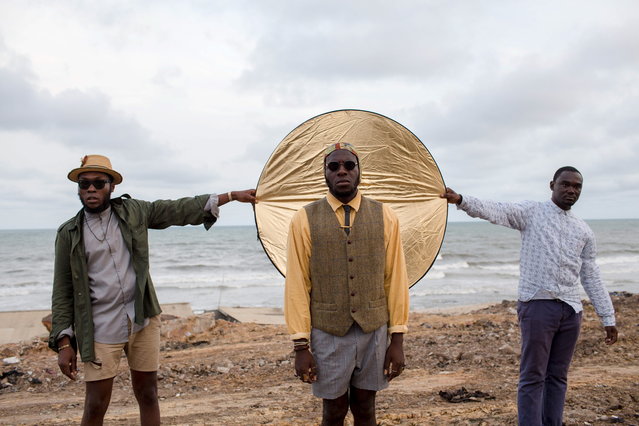 GHANA: DJ Evans Mireku Kissi (C) poses for a picture after a street performance in Jamestown, Accra, Ghana, June 12, 2015. Young artists in Ghana's capital have evolved a new style that is turning heads and challenging accepted notions of African fashion. Their passions span fine art, graphic design, music and, above all, clothes that attract notice in a city where most men wear conservative Western suits or, on special occasions, shirts made from traditional fabrics. “I like the fact that it is creating drama in the minds of the people”, Kissi said. The group publishes selfies on social media, projecting their style to an audience far beyond Accra. (Photo by Francis Kokoroko/Reuters) 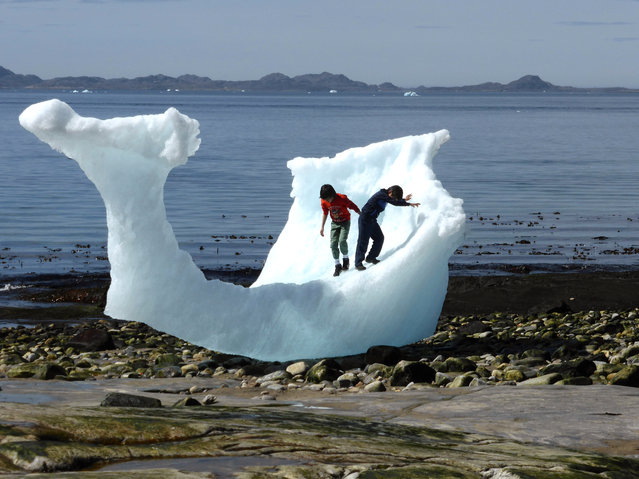 GREENLAND: Children play amid icebergs on the beach in Nuuk, Greenland, June 5, 2016. (Photo by Alister Doyle/Reuters) 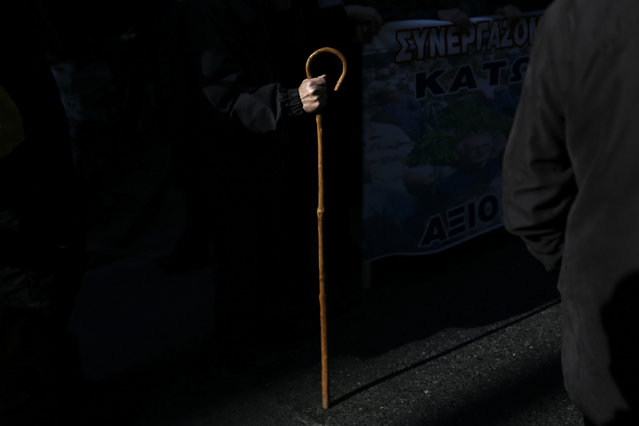 GREECE: A Greek pensioner holds a shepherd's crook during a demonstration against planned pension reforms in Athens, Greece, January 19, 2016. (Photo by Alkis Konstantinidis/Reuters) 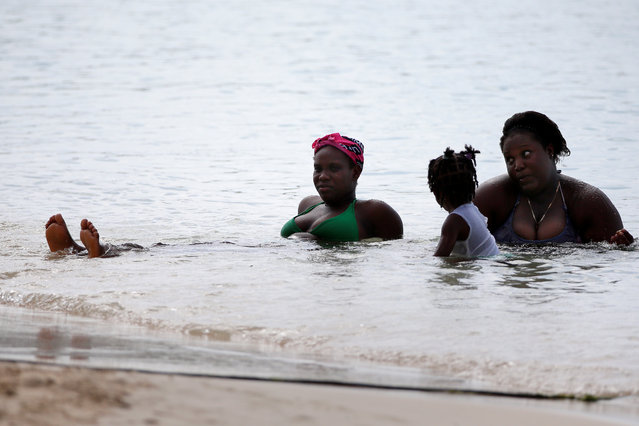