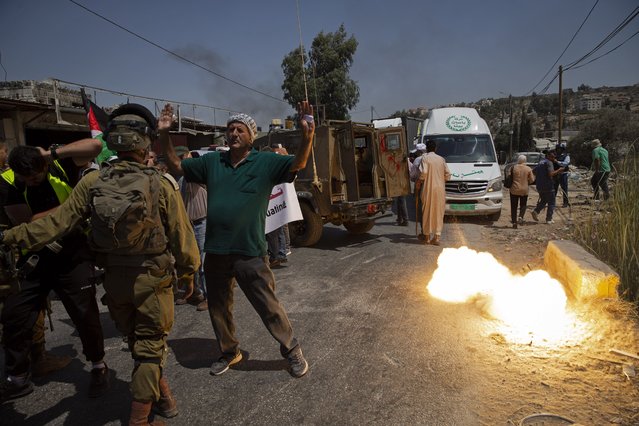 A sound grenade is fired by Israeli forces during a protest against the creation of a new road for Israeli settlers, near the Palestinian village of Beita, north of the West Bank city of Nablus, Wednesday, August 25, 2021. (Photo by Majdi Mohammed/AP Photo) 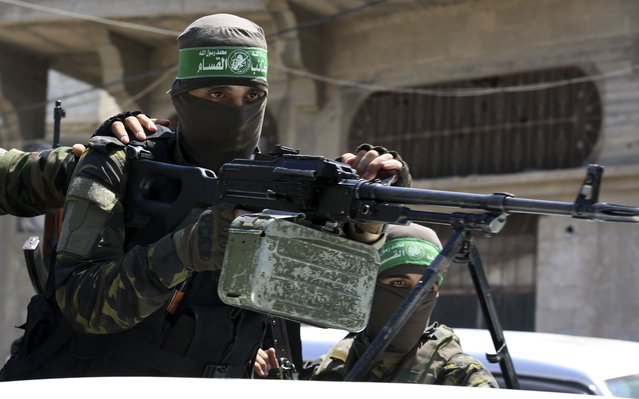 A masked militant from the Izzedine al-Qassam Brigades, a military wing of Hamas, stands behind a machine gun on a truck as mourners carry the body of Osama Dueij, 32, who was shot in the leg on Saturday during a violent demonstration on the northern border between Gaza and Israel, during his funeral procession in Jebaliya refugee camp, northern Gaza Strip, Wednesday, August 25, 2021. (Photo by Adel Hana/AP Photo) 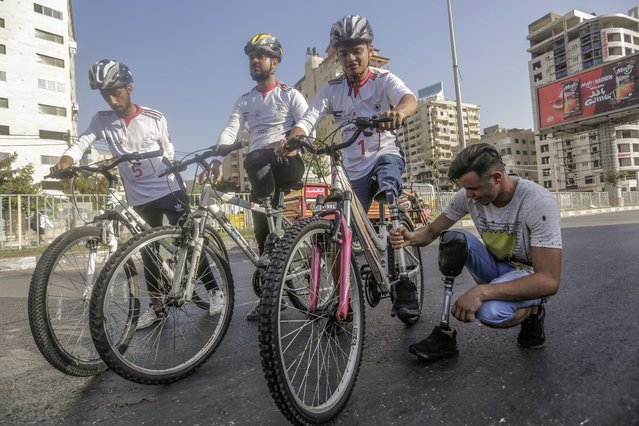 Disabled Palestinians participate in a bicycle race at Gaza sea port on August 29, 2021. Almost 50,000 Palestinians are classified as “disabled” among the 2-million population of the blockaded Gaza Strip. The number is increasing with more people injured and disabled as a result of Israel's frequent military. (Photo by Mahmoud Issa/SOPA Images/Rex Features/Shutterstock) 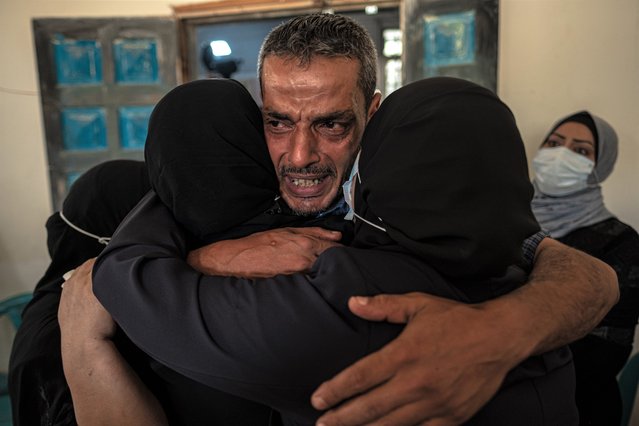 Relatives of Palestinian Omar al-Nile, 12, who was shot on Saturday during a violent demonstration on the eastern border between Gaza and Israel, mourn during his funeral on August 28, 2021 in Gaza City, Gaza. (Photo by Fatima Shbair/Getty Images) 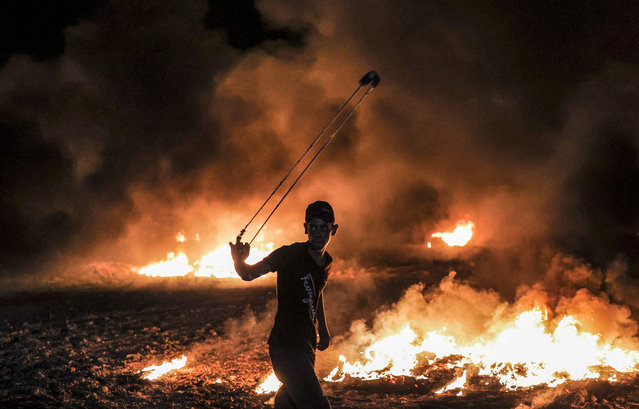 A Palestinian protester swings a slingshot near burning tyres following a demonstration along the border between the Gaza Strip and Israel east of Gaza City on August 28, 2021. (Photo by Mahmud Hams/AFP Photo) 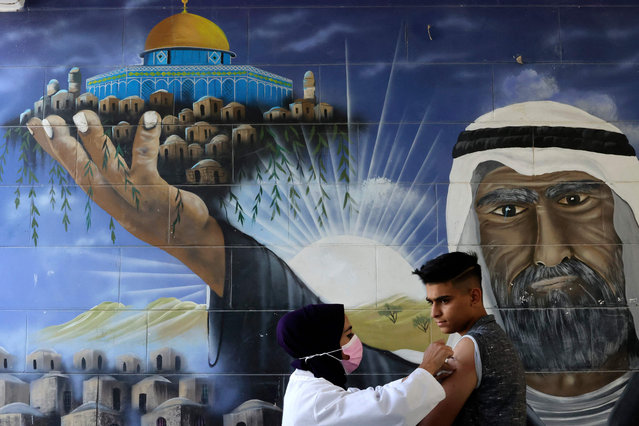 A Palestinian secondary student takes a dose of the Pfizer-BioNtech Covid-19 coronavirus vaccine, in Taffuh village, west the West Bank town of Hebron, on September 1, 2021 on the first day of the new school year. (Photo by Hazem Bader/AFP Photo) 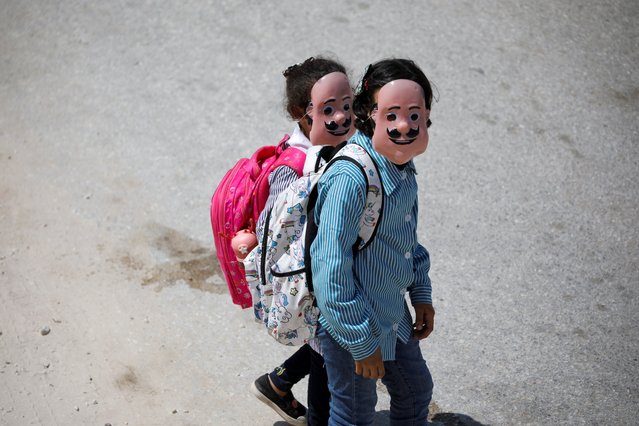 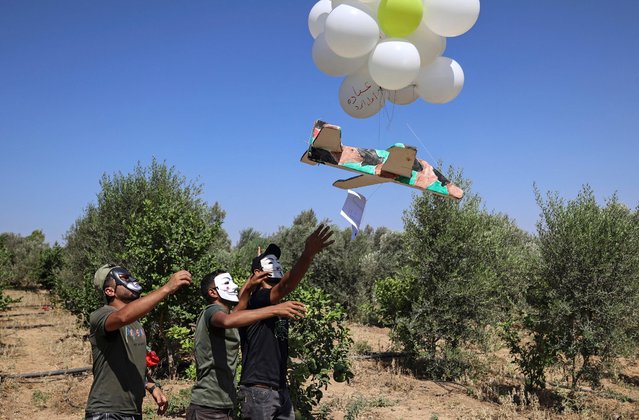 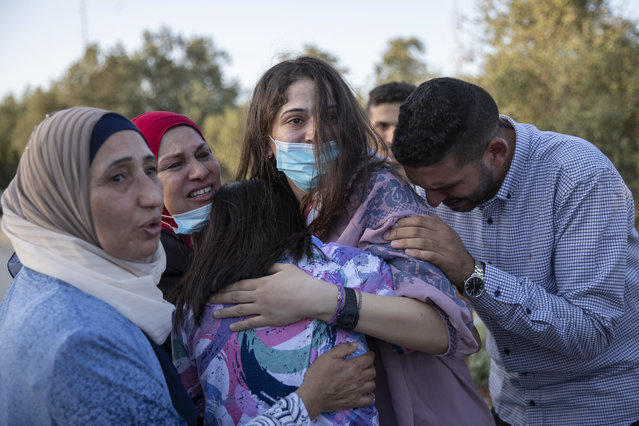 Family members and friends of released Palestinian prisoner Layan Kayed receive her outside the gate of the Israeli Salem checkpoint, in the West Bank city of Jenin, Thursday, September 9, 2021. Kayed was released from the Israeli Damon prison on Thursday after serving 15 months. (Photo by Nasser Nasser/AP Photo) 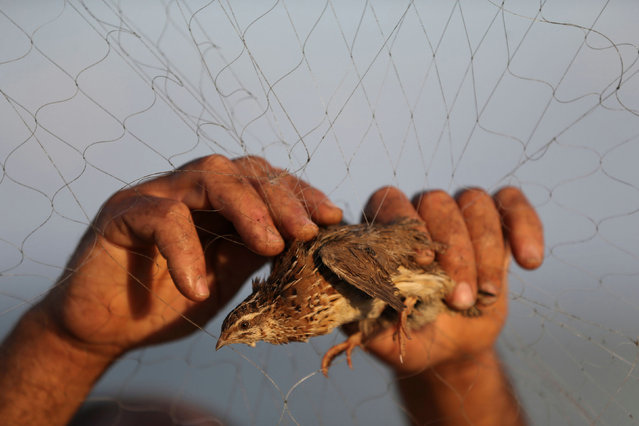 A Palestinian man takes a quail out of a net after catching it in Khan Younis, in the southern Gaza Strip, September 14, 2021. (Photo by Ibraheem Abu Mustafa/Reuters) 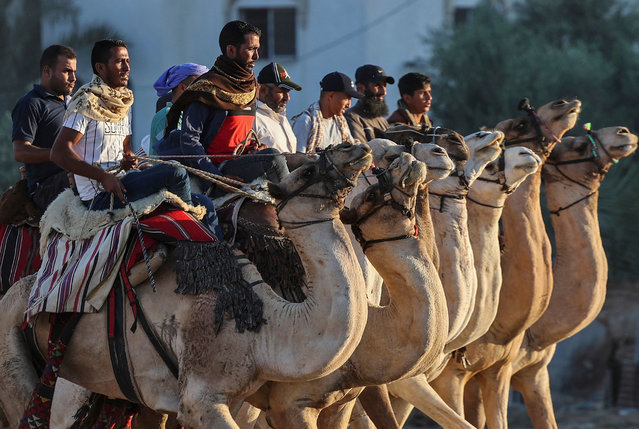 Palestinians ride camels after a local race in Rafah in the southern Gaza Strip on September 14, 2021. (Photo by Said Khatib/AFP Photo) 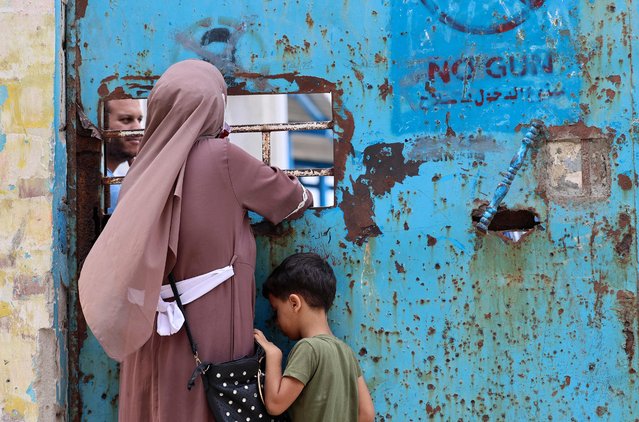 A Palestinian woman and her child stand next to a window of an aid distribution centre run by the United Nations Relief and Works Agency (UNRWA) in Gaza City, on September 16, 2021. (Photo by Mohammed Abed/AFP Photo) 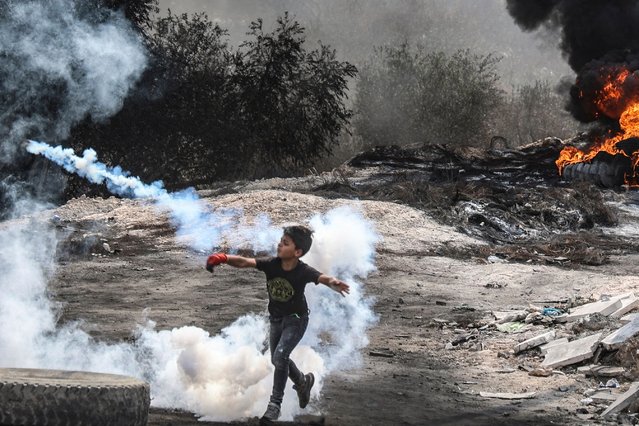 A young Palestinian boy joins fellow protesters in confrontations with Israeli security forces, following a demonstration against settlements in the West Bank village of Beita, on September 17, 2021. (Photo by Jaafar Ashtiyeh/AFP Photo) 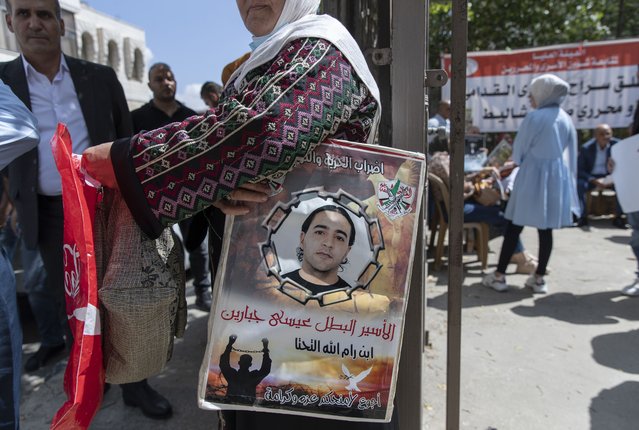 A woman holds a poster with a picture of a Palestinian prisoner that reads “the prisoner hero Issa Jabbareen, I starve for your dignity and pride” during a protest supporting prisoners, in the West Bank city of Ramallah, Tuesday, September 14, 2021. Hundreds of thousands of Palestinians have passed through a military justice system designed for a temporary occupation that is now well into its sixth decade. Nearly every Palestinian has a loved one who has been locked up in that system at some point, and imprisonment is widely seen as one of the most painful aspects of life under Israeli rule. (Photo by Nasser Nasser/AP Photo) 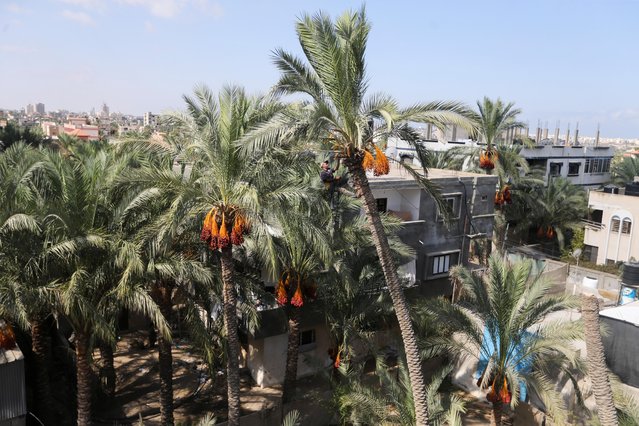 A Palestinian man harvests dates from a palm tree in Khan Younis, in the southern Gaza Strip, September 22, 2021. (Photo by Ibraheem Abu Mustafa/Reuters) 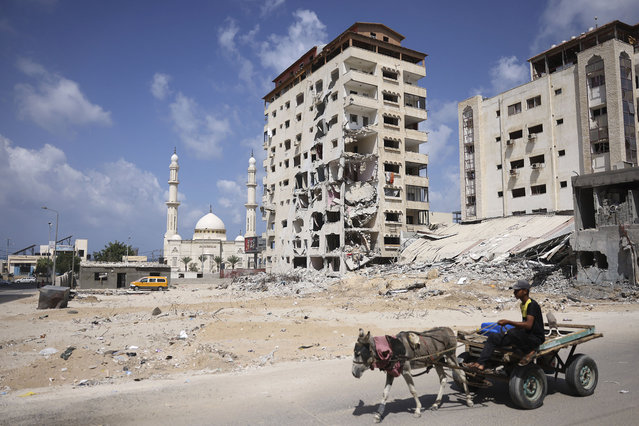 A Palestinian man rides his donkey cart past a building that was destroyed during the recent 11-day war between Israel and the Palestinian Hamas movement, in Gaza City, on September 23, 2021. (Photo by Mohammed Abed/AFP Photo) 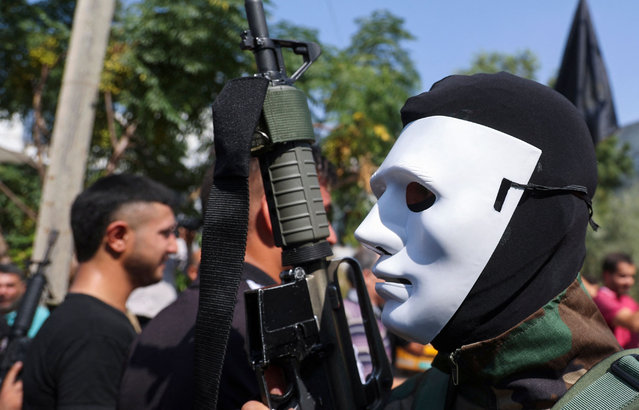 A masked Palestinian militant takes part in the funeral of member of the military wing of the Islamic Jihad group Alaa Zayoud, 22, reportedly killed in clashes with Israeli forces earlier, at his village of Silat al-Harithiyah, east of Jenin in the occupied West Bank, on September 30, 2021. (Photo by Jaafar Ashtiyeh/AFP Photo) 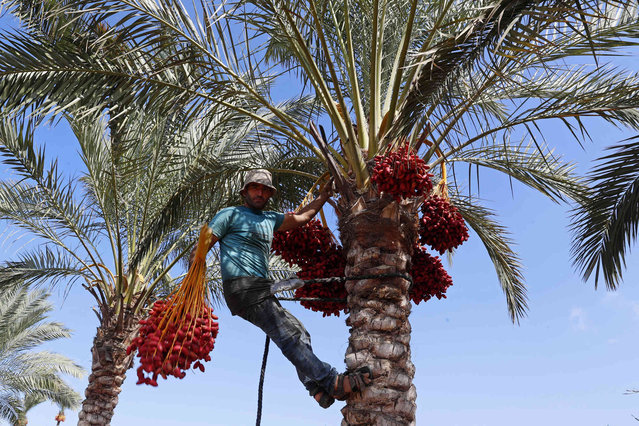 A Palestinian farm worker climbs a palm tree to harvest dates on a farm in Deir el-Balah, central Gaza Strip, Thursday, September 30, 2021. The harvesting season for dates usually starts at the beginning of October, after the first rain. The community of Deir El Balah takes its name from the word “Balah”, an Arabic word for dates. (Photo by Adel Hana/AP Photo) 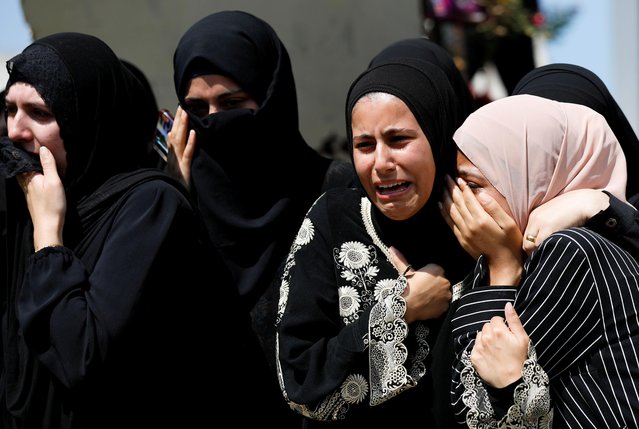 Palestinians react during the funeral of Islamic Jihad gunman Alaa Zyoud who was killed by Israeli forces during exchange of fire in a raid, near Jenin in the Israeli-occupied West Bank, September 30, 2021. (Photo by Mohamad Torokman/Reuters) 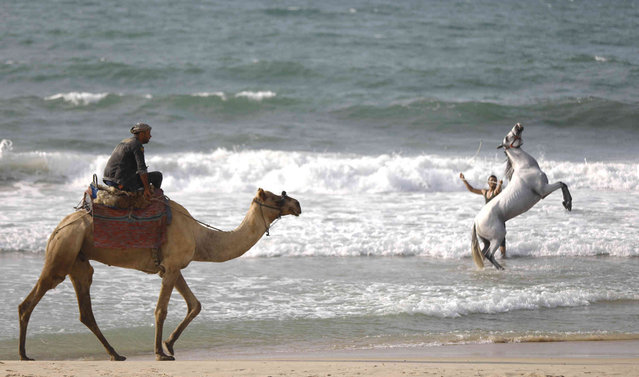 A Palestinian man plays with a horse at the beach of the Mediterranean Sea in Gaza City in the northern Gaza Strip, Friday October 1, 2021. The beach is one of the few open public spaces in this densely populated city. (Photo by Hatem Moussa/AP Photo)
Edit Del
08 Oct 2021 08:43:00, post received 0 comments
Publication archive:
←   →
Popular tags:
All tags
Last searches: