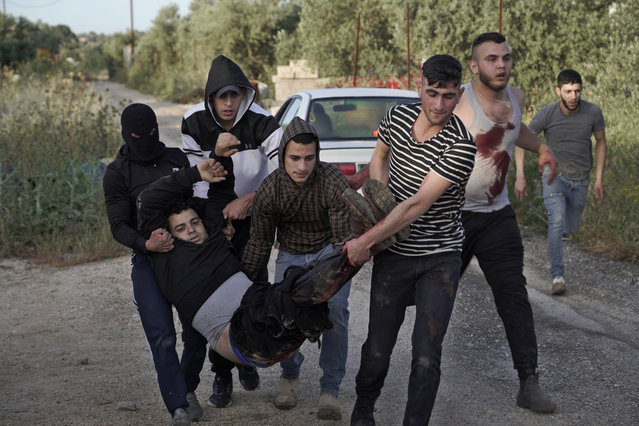 Palestinians carry a wounded man during clashes with Israeli soldiers, in the West Bank village of Silat al-Harithiya, near Jenin, Saturday, May 7, 2022, as Israeli forces demolished the home of Omar Jaradat was part of a group who shot and killed yeshiva student Yehuda Dimentman in the West Bank in Decelmer 20221. (Photo by Majdi Mohammed/AP Photo) 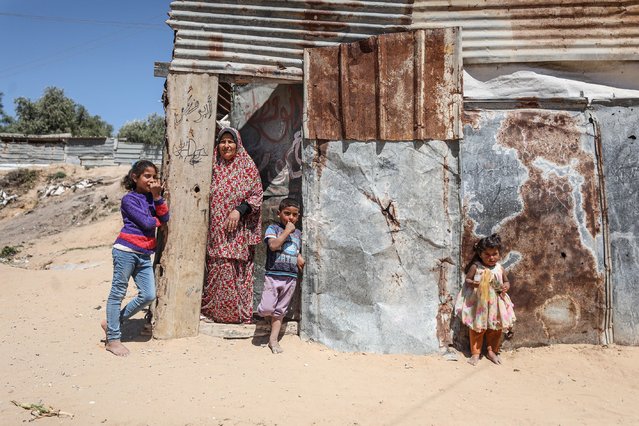 Palestinian children are seen playing on the street surrounded by makeshift houses in Om al-Nasr of northern Gaza on May 7, 2022. (Photo by Mustafa Hassona/Anadolu Agency via Getty Images) 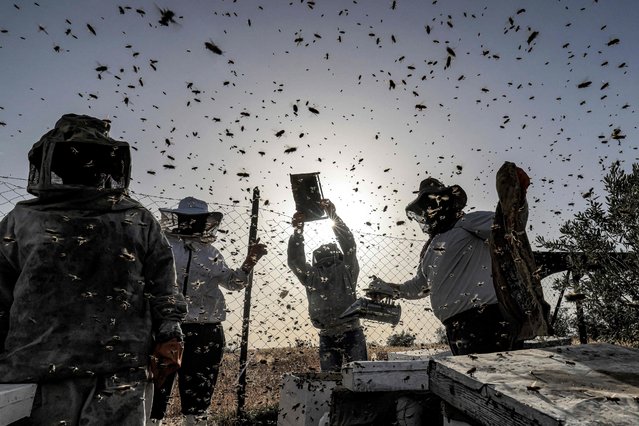 Palestinian beekeepers collect honey from beehives at an apiary during the annual harvest season in Khan Yunis in the southern Gaza Strip on May 9, 2022. (Photo by Said Khatib/AFP Photo) 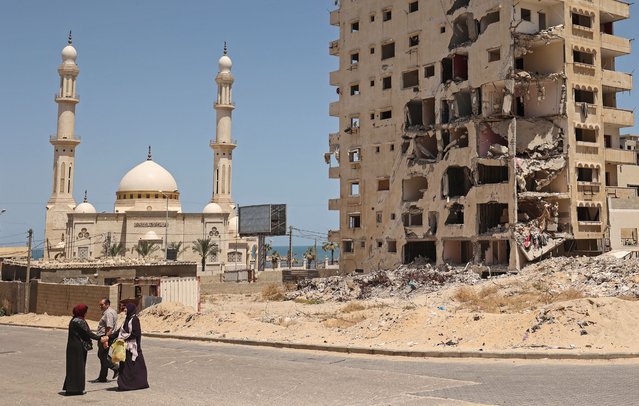 A picture taken on May 10, 2022 shows the site of Hanadi Tower on the first anniversary of the May 2021 conflict between Israel and Hamas, in Beit Lahia in the northern Gaza Strip. (Photo by Mahmud Hams/AFP Photo) Palestinian beekeepers remove bees in the process of collecting honey at a farm in the central Gaza Strip on May 11, 2022. (Photo by Ibraheem Abu Mustafa/Reuters) A Palestinian beekeeper uses smoke to calm bees in the process of collecting honey at a farm in the central Gaza Strip on May 11, 2022. (Photo by Ibraheem Abu Mustafa/Reuters) 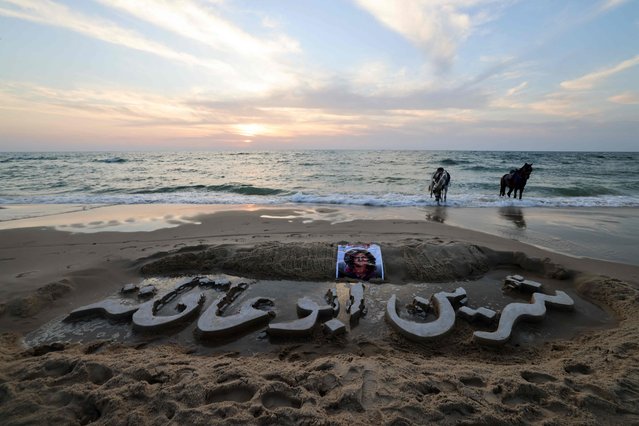 The name of slain Palestinian Al-Jazeera journalist Shireen Abu Akleh is carved in the sand, on a beach in Gaza City, on May 11, 2022. Al-Jazeera said Abu Akleh, 51, a prominent figure in the channel's Arabic news service was shot dead by Israeli troops early on May 11, 2022 as she covered a raid on Jenin refugee camp in the occupied West Bank. Israeli Prime Minister Naftali Bennett said it was “likely” that Palestinian gunfire killed her. (Photo by Mohammed Abed/AFP Photo) 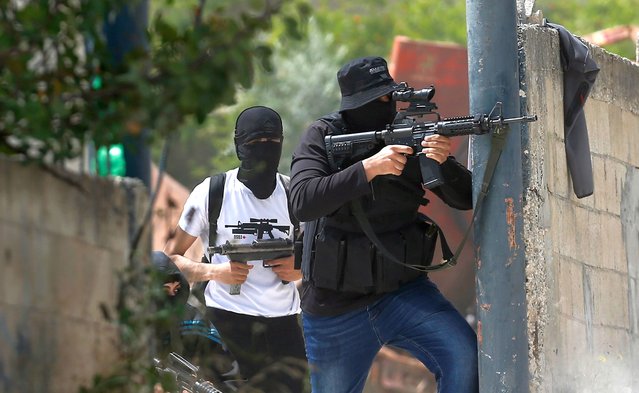 Palestinian militants take aim at Israeli troops during clashes in the West Bank city of Jenin, 13 May 2022. Armed clashes broke out between Palestinians and Israeli forces in Jenin in the West Bank on 13 May morning, as Israeli security forces raided the city. One arrest was made, seven Palestinians were injured in the operation. (Photo by Alaa Badarneh/EPA/EFE) 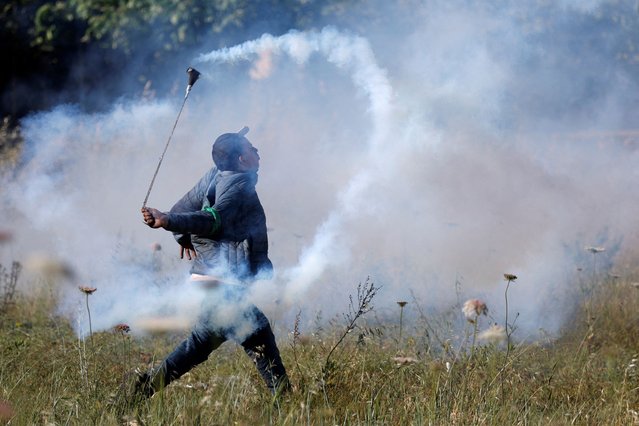 A demonstrator participates in clashes with the Israeli forces following a rally marking the 74th anniversary of Nakba or catastrophe, in Ramallah in the Israeli-occupied West Bank on May 15, 2022. (Photo by Mohamad Torokman/Reuters) 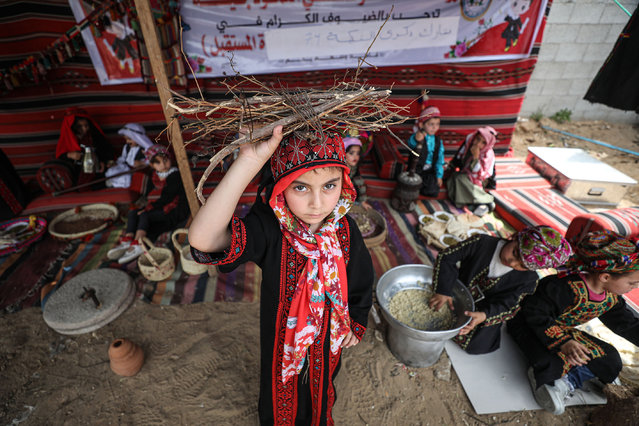 Palestinian children take part in an event to commemorate the 74th anniversary of the Nakba, also known as Day of the Catastrophe in 1948, in Beit Lahia, Gaza on May 14, 2022. (Photo by Mustafa Hassona/Anadolu Agency via Getty Images) 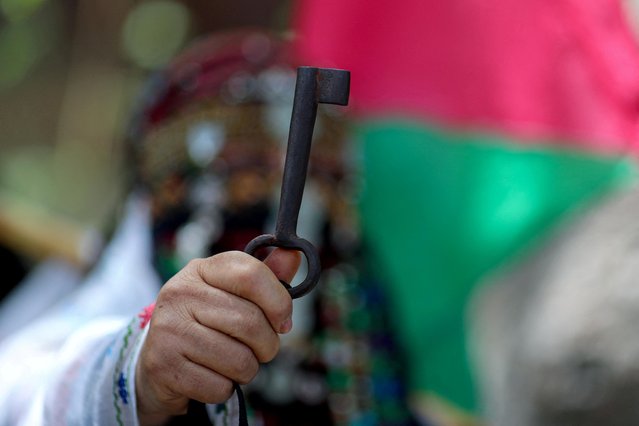 A Palestinian woman holds up a key symbolizing their demand to return to homes they fled or were expelled from in the war that led to the founding of Israel in 1948, during a rally marking the 74th anniversary of Nakba, or catastrophe, in Gaza City on May 15, 2022. (Photo by Mohammed Salem/Reuters) 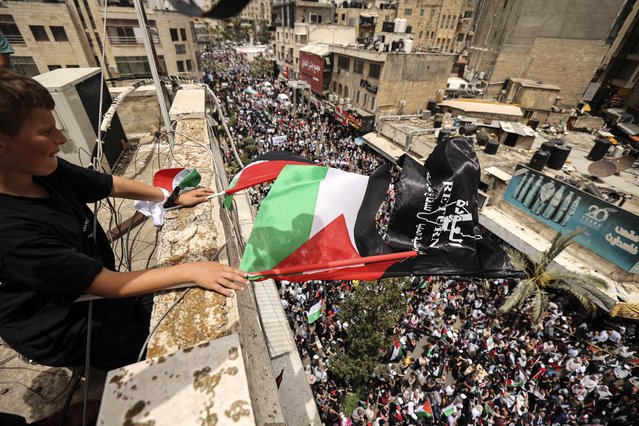 A young Palestinian waves national flags from a rooftop as people march in a rally marking the 74th anniversary of the “Nakba“ or “catastrophe”, in the occupied West Bank town of Ramallah, on May 15, 2022. Each year Palestinians commemorate the “Nakba” on May 15, the official date of Israel's creation, as a result of which more than 760,000 Palestinians were pushed into exile or driven out of their homes. (Photo by Abbas Momani/AFP Photo) 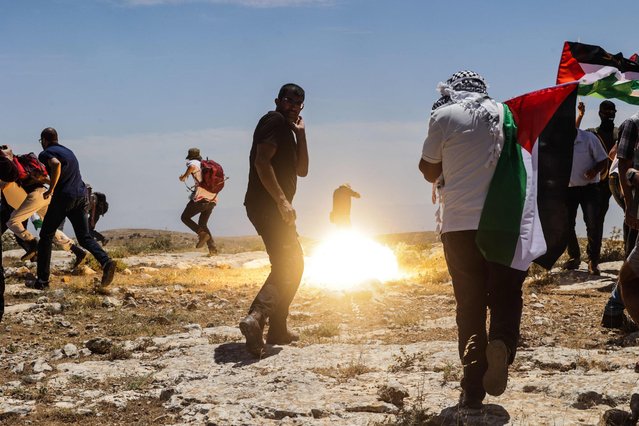 People run from tear gas fired by security forces during a demonstration by Israeli, Palestinian and foreign activists against the eviction of Palestinian villages to make way for an Israeli military training zone, in the southern hills of Yatta, south of the West Bank town of Hebron, on May 20, 2022. Israeli civil rights groups recently denounced a High Court decision that approved the eviction of roughly 1,000 Palestinian villagers to make way for a military training zone. The case of Masafer Yatta, or Firing Zone 918, an agriculture area near Hebron, has been one of Israel's longest running legal battles. (Photo by Hazem Bader/AFP Photo) 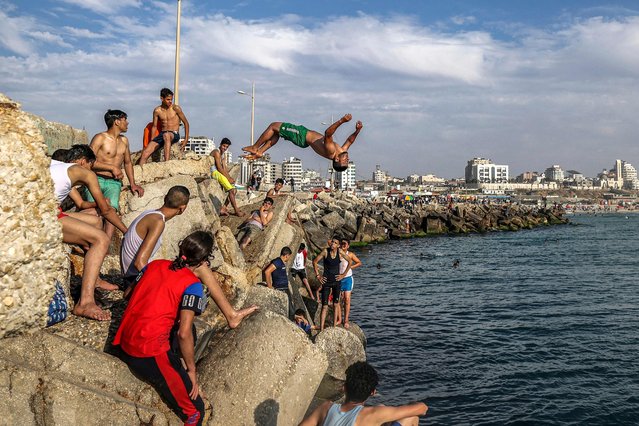 Youths watch as one performs a backflip while diving off rocks into the Mediterranean sea in Gaza City on May 20, 2022. (Photo by Mahmud Hams/AFP Photo) 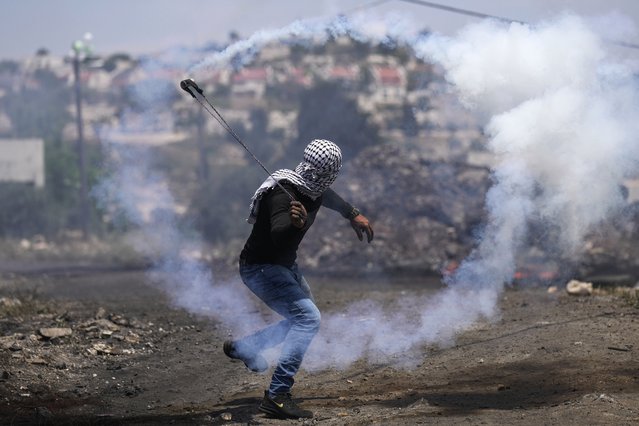 A Palestinian demonstrator hurls back a tear gas canister fired by Israeli forces during a protest against the West Bank Jewish settlements, in the West Bank village of Kafr Qaddum, Friday, May 20, 2022. (Photo by Majdi Mohammed/AP Photo) 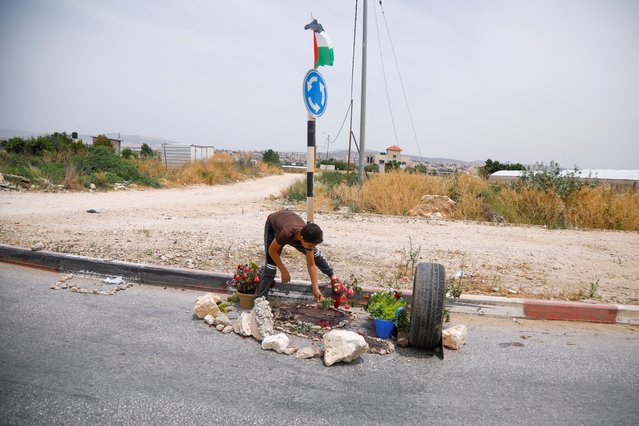 A boy places flowers at the site where Palestinian militant Amjad Al Fayed was killed in clashes during an Israeli raid, in Jenin in the Israeli-occupied West Bank on May 21, 2022. (Photo by Raneen Sawafta/Reuters) 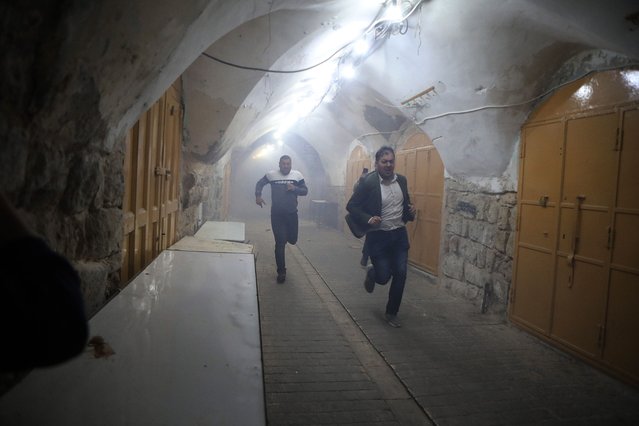 Palestinians run for cover during clash with the Israeli army in the West Bank city of Hebron on 23 May 2022, following a protest against, Israeli plans to change the status quo in the Ibrahimi Mosque, also known as “the Cave of the Patriarchs” and building an elevator to serve Jewish worshipers. (Photo by Abed Al Hashlamoun/EPA/EFE) 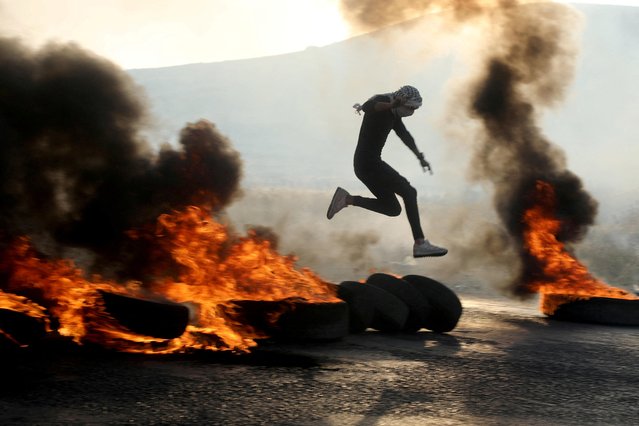 Palestinian man jumps over burning tires as people protest over tensions in Jerusalem's Al-Aqsa Mosque, at Huwara checkpoint, near Nablus in the Israeli-occupied West Bank on May 29, 2022. (Photo by Raneen Sawafta/Reuters) 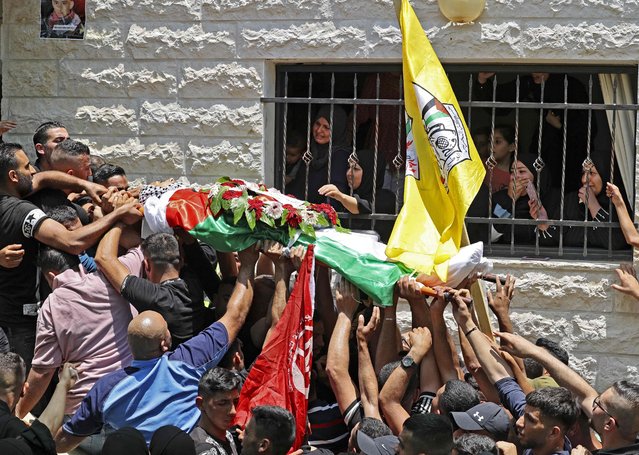 Palestinian mourners carry the body of 17-year-old Odeh Odeh, who was hit in the chest the day before by what the Palestinian health ministry said was an Israeli bullet, during his funeral in the village of Al-Madiya on June 3, 2022. The Israeli security forces have stepped up their operations in the West Bank in recent months, carrying out almost daily raids to arrest suspects after a spate of deadly attacks inside Israel. (Photo by Abbas Momani/AFP Photo) 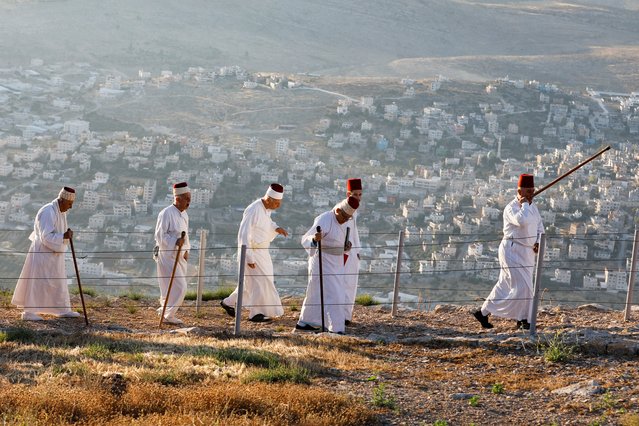