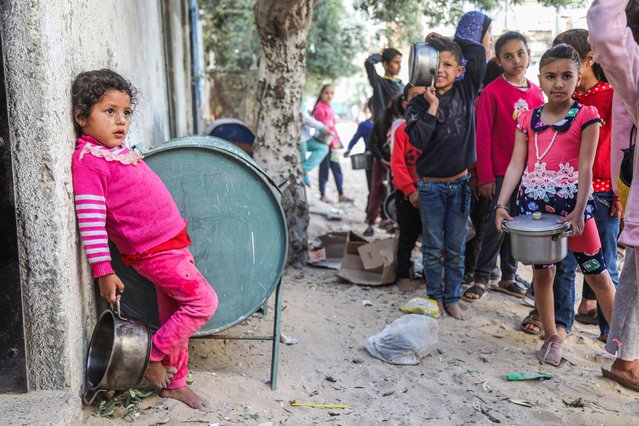 Palestinian children gather with pots and pans to get soup from a center of a local charity group that offers free food during the holy month of Ramadan in the Al-Nuseirat refugee camp, central Gaza strip on April 6, 2022. Muslims around the world especially in the holy month of Ramadan offers a lot of charity works such as free meal distribution centres, which they call “Tekeya” for poor people. (Photo by Ahmed Zakot/SOPA Images/Rex Features/Shutterstock) 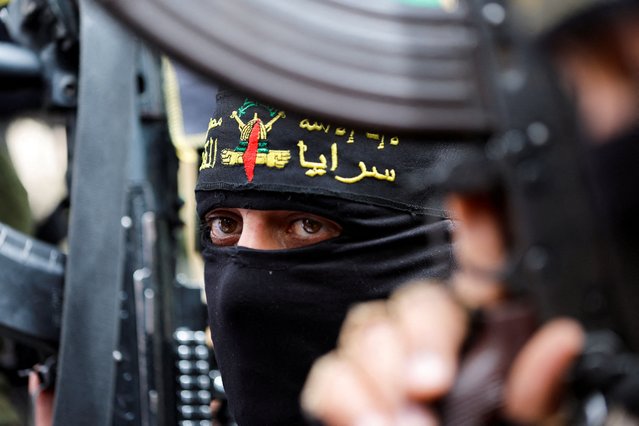 Palestinian Islamic Jihad militants take part in a rally to celebrate the shooting attacks in Israel, in Khan Younis, in the southern Gaza Strip on April 8, 2022. (Photo by Ibraheem Abu Mustafa/Reuters) 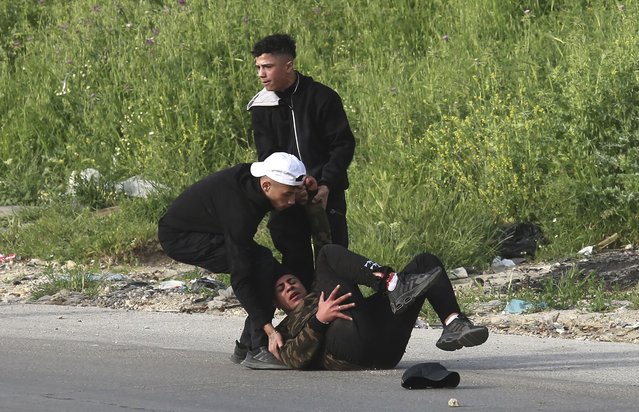 Palestinians help an injured youth during clashes with Israeli security forces on a raid to look for wanted Palestinians in Nablus city in the occupied West Bank, on April 11, 2022, following a spree of attacks in Israel that has left 14 people dead in the past three weeks. (Photo by AFP Photo/Stringer) 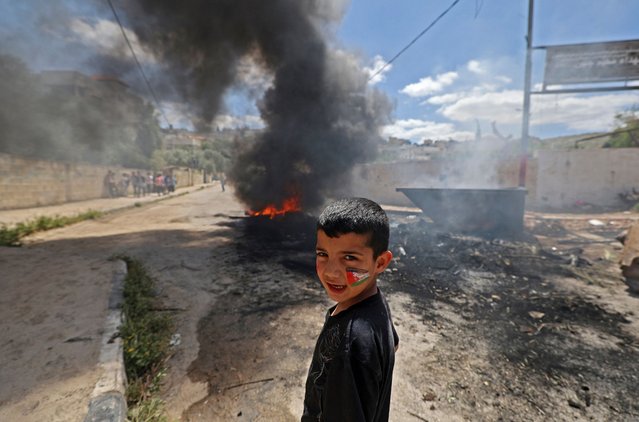 A Palestinian child stands in front of burning tyres in the refugee camp of Jenin in the occupied West Bank after an Israeli military raid on April 12, 2022. Israeli troops launched a fourth day of operations around Jenin after an assailant from the district shot and killed three people and wounded 12 in a Tel Aviv bar last week in an attack that stunned the country. (Photo by Jaafar Ashtiyeh/AFP Photo) 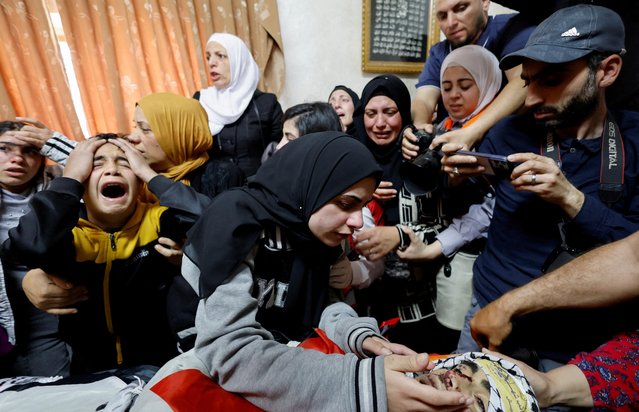 Relatives react next to the body of Palestinian Mohammed Ghoneim, who medics say was killed by Israeli forces, during his funeral near Bethlehem, in the Israeli-occupied West Bank on April 11, 2022. (Photo by Mussa Qawasma/Reuters) 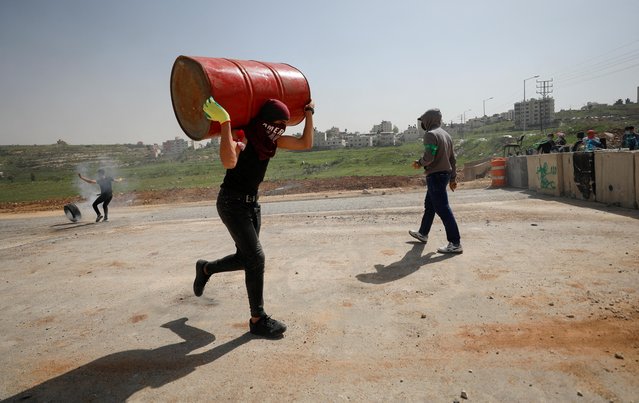 A Palestinian protester carries a barrel during clashes with Israeli forces near the Jewish settlement of Beit El, near Ramallah, in the Israeli-occupied West Bank, April 11, 2022. (Photo by Mohamad Torokman/Reuters) 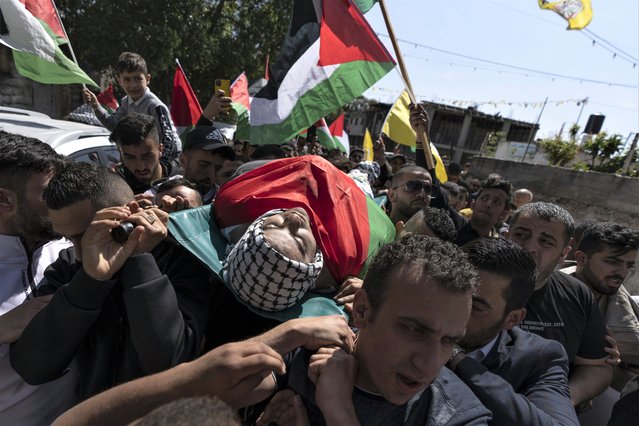 Palestinian mourners carry the body of Muhammad Assaf during his funeral in the West Bank village of Kufr Laqef, near Qalqiliya, Wednesday, April 13, 2022. Israeli forces shot and killed Assaf, 34, during clashes on Wednesday, the Palestinian Health Ministry said, as Israeli troops continued a days-long operation in the occupied West Bank in response to a spate of deadly attacks. (Photo by Nasser Nasser/AP Photo) 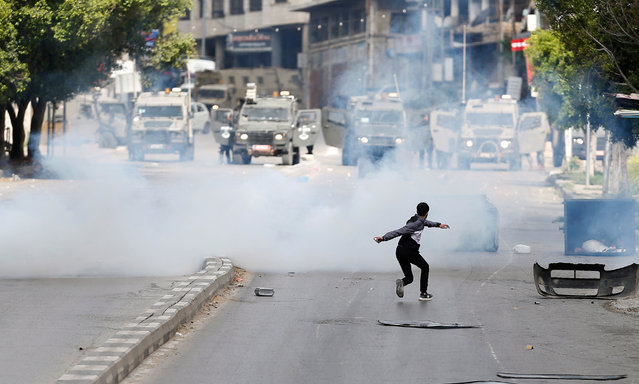 Palestinians throw stones at Israeli troops during clashes in the West Bank city of Nablus, 13 April 2022. According to Palestinian medical sources, 35-year-old Mohamed Assaf was killed during clashes with Israeli forces raiding in Nablus city earlier in the day. (Photo by Alaa Badarneh/EPA/EFE) 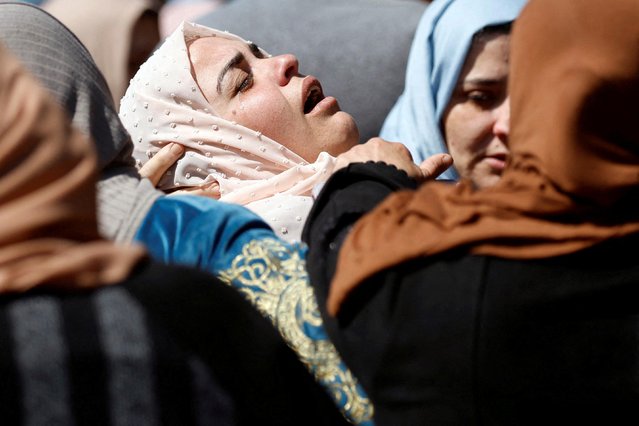 A relative reacts during the funeral of Palestinian Mohammed Assaf, who was killed by Israeli forces during clashes in a raid, according to medics, near Qalqilya in the Israeli-occupied West Bank on April 13, 2022. (Photo by Mohamad Torokman/Reuters) 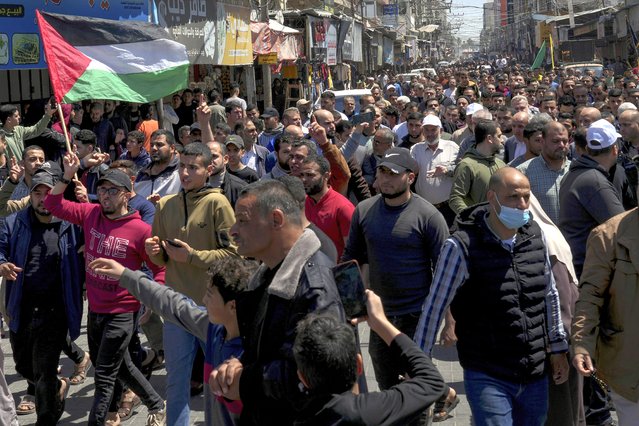 Palestinians attend a rally in solidarity with Palestinian residents of the West Bank and Jerusalem, in Gaza City, Friday, April 15, 2022. Tensions have soared in recent weeks following a series of attacks by Palestinians that killed 14 people inside Israel. Israel has carried out a wave of arrests and military operations across the occupied West Bank, setting off clashes with Palestinians. At least 25 Palestinians have been killed in the recent wave of violence, many of whom had carried out attacks or were involved in the clashes, but also an unarmed woman and a lawyer who appears to have been killed by mistake. (Photo by Adel Hana/AP Photo) 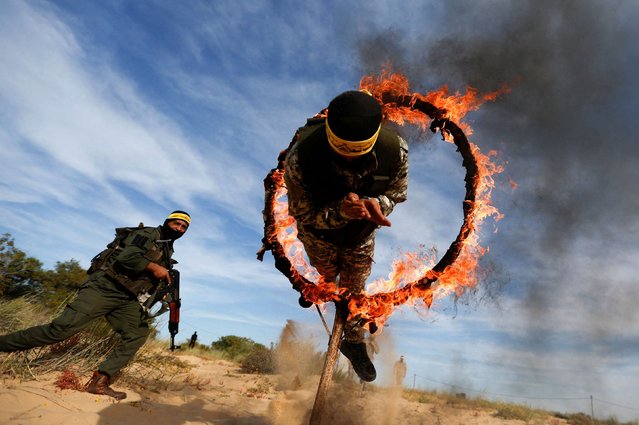 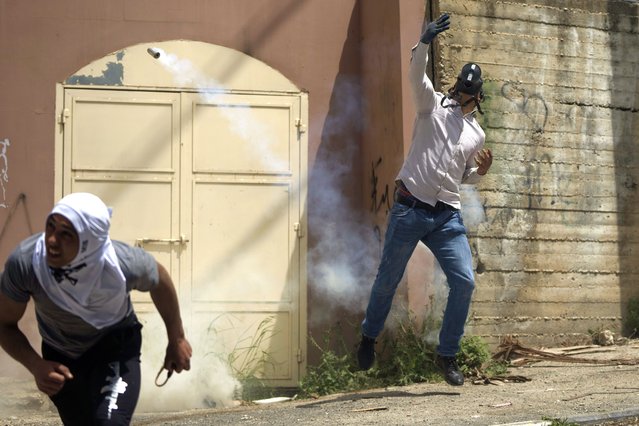 A Palestinian protester returns a teargas canister during clashes with Israeli border police in the West Bank village of Burqa, north of Nablus, Tuesday, April 19, 2022. Palestinians protesting against a settlers march toward Homesh, a settlement that was officially dismantled by Israel in 2005, clashed with Israeli border police that closed the main entrance of the village to secure the event. (Photo by Nasser Nasser/AP Photo) 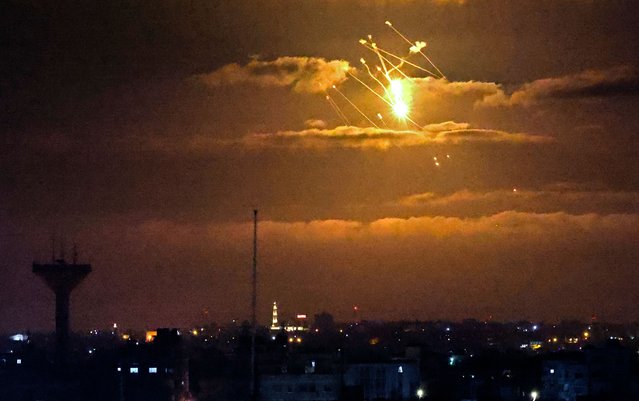 Israeli Iron Dome missiles intercept incoming missiles fired from the Gaza Strip above the Palestinian enclave, on April 21, 2022. Palestinian militants fired volleys of rockets from Gaza into Israel, which responded with air strikes in the early hours in the biggest escalation since an 11-day war last year. (Photo by Said Khatib/AFP Photo) 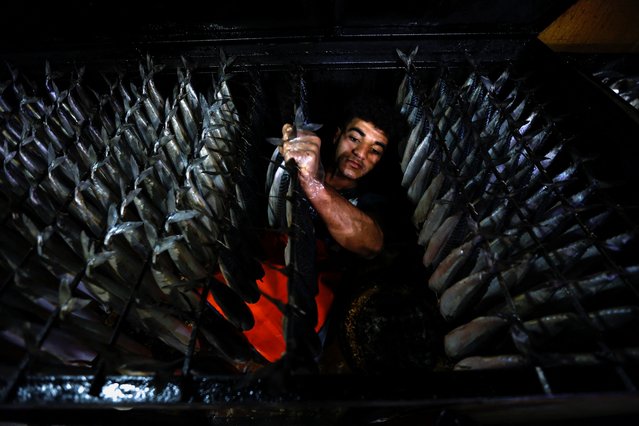 A Palestinian man prepares salted fish to be sold in a market ahead of Eid al-Fitr, in Rafah, in the southern Gaza Strip, April 26, 2022. (Photo by Ibraheem Abu Mustafa/Reuters) 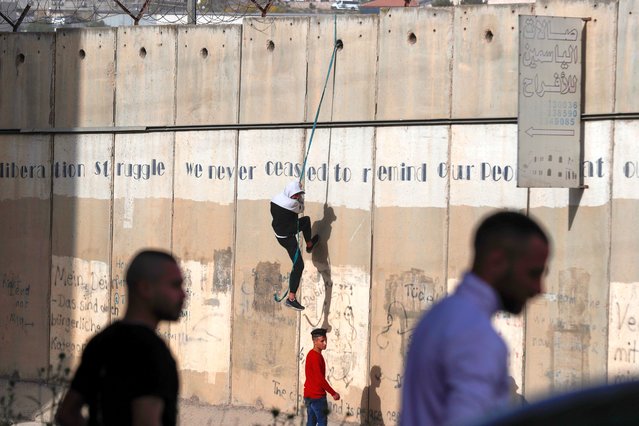 Palestinian men trying to jump over the separation barrier between the Palestinian town of A-Ram and Jerusalem, to attend the last Friday prayer of the Muslim holy month of Ramadan in Al Aqsa Mosque in Jerusalem’s old city, 29 April 2022. (Photo by Atef Safadi/EPA/EFE) 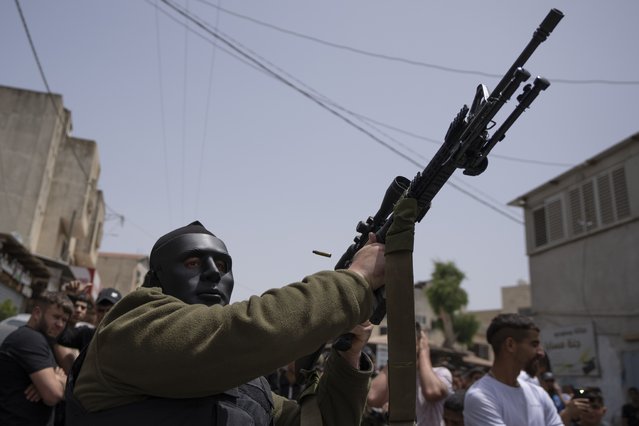 A masked Palestinian gunman shoots in the air during the funeral of Yahia Edwan, 27 at the West Bank village of Azzoun, near Qalqiliya, Saturday, April 30, 2022. Israeli troops shot and killed Edwan early Saturday, the Palestinian Health Ministry said. The Israeli army said it had opened fire after a group of suspects threw firebombs toward the soldiers. (Photo by Nasser Nasser/AP Photo) 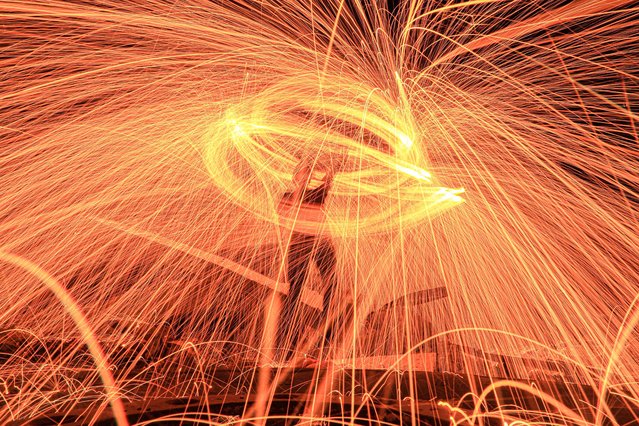 A Palestinian waves fireworks on the last day of the holy month of Ramadan in Khan Yunis in the southern Gaza Strip on May 1, 2022. (Photo by Yousef Masoud/SOPA Images/Rex Features/Shutterstock) 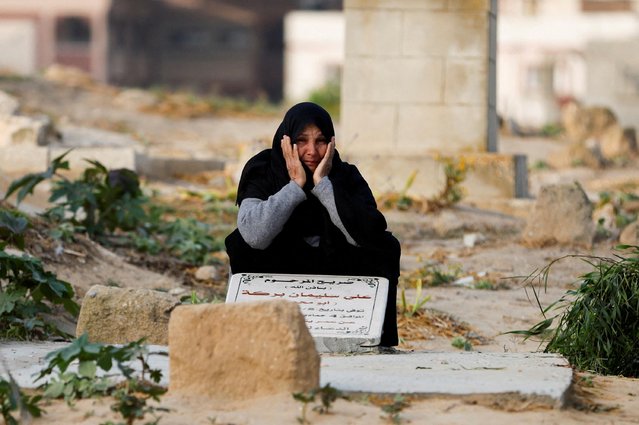 A Palestinian woman cries as she visits the grave of a relative at a cemetery, on the first day of Eid al-Fitr that marks the end of the holy fasting month of Ramadan, in Khan Younis, in the southern Gaza Strip on May 2, 2022. (Photo by Ibraheem Abu Mustafa/Reuters) 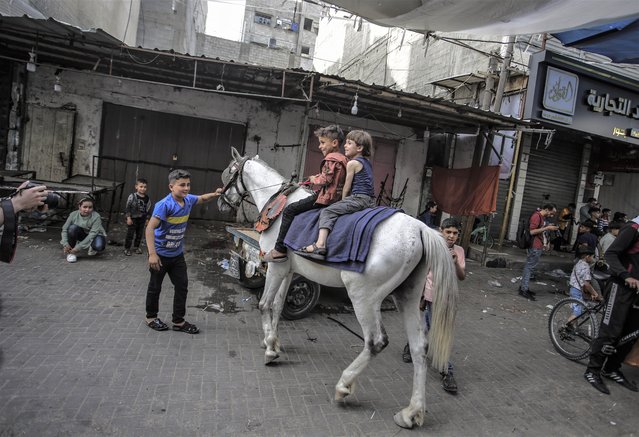 Two children ride a horse at Jabalia refugee camp as they celebrate on the second day of the feast of Eid al-Fitr, which marks the end of the Muslim holy month of Ramadan on May 3, 2022. (Photo by Mahmoud Issa/Quds Net News via ZUMA Press/Rex Features/Shutterstock)
Edit Del
14 May 2022 05:38:00, post received 0 comments
Publication archive:
←   →
Popular tags:
All tags
Last searches: