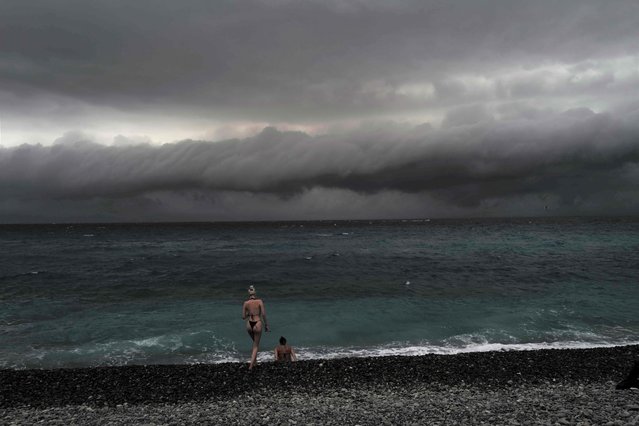 Beach-goers look at the clouds before a storm along the “Promenade des anglais” on the french riviera city of Nice, on June 28, 2022. (Photo by Valery Hache/AFP Photo) 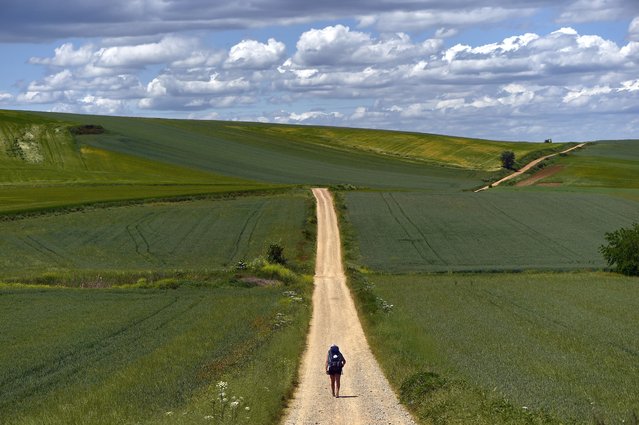 A pilgrim walks during a stage of “Camino de Santiago” or St. James Way near to Santo Domingo de La Calzada, northern Spain, Tuesday, May 31, 2022. Over centuries, villages with magnificent artwork were built along the Camino de Santiago, a 500-mile pilgrimage route crossing Spain. Today, Camino travelers are saving those towns from disappearing, rescuing the economy and vitality of hamlets that were steadily losing jobs and population. “The Camino is life”, say villagers along the route. (Photo by Alvaro Barrientos/AP Photo) 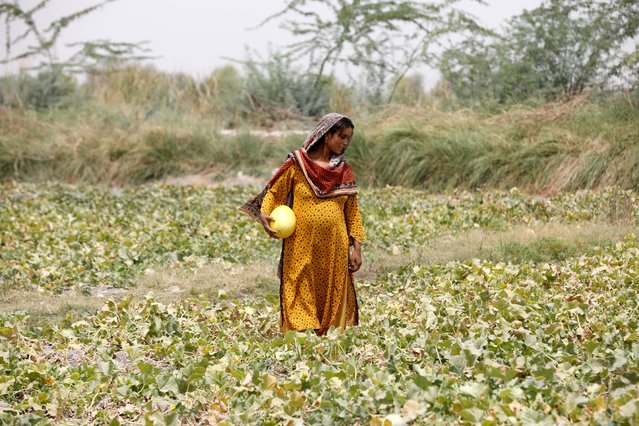 Heavily Pregnant, Sonari, collects muskmelons during a heatwave, at a farm on the outskirts of Jacobabad, Pakistan, May 17, 2022. “When the heat is coming and we're pregnant, we feel stressed”, said Sonari. (Photo by Akhtar Soomro/Reuters) 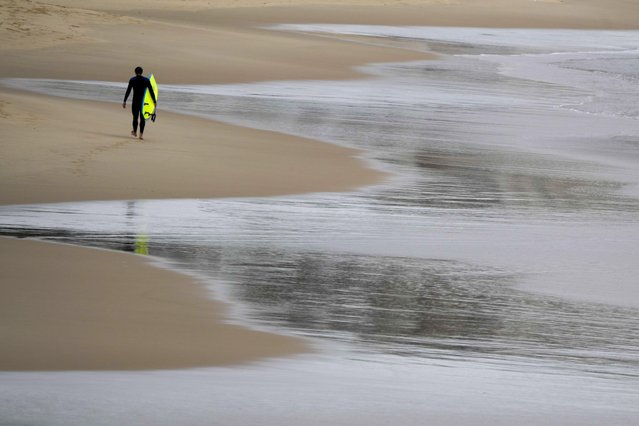 A surfer leaves the water at Bronte Beach in Sydney, Australia, Tuesday, May 24, 2022. (Photo by Mark Baker/AP Photo) 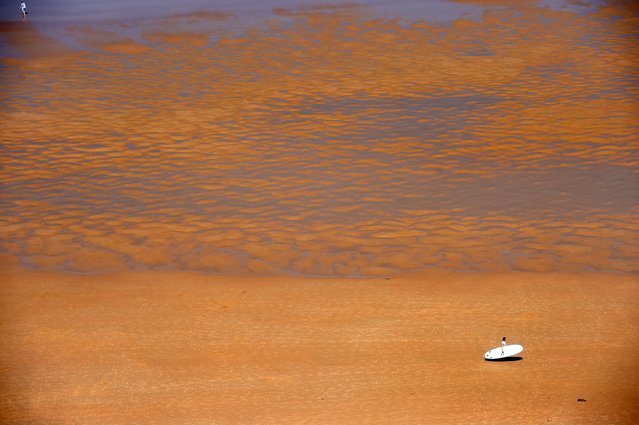 People walk on the beach of “La Plage des Basques” as they enjoy the sun and the warm weather in Biarritz, southwestern France, on May 17, 2022. (Photo by Gaizka Iroz/AFP Photo) 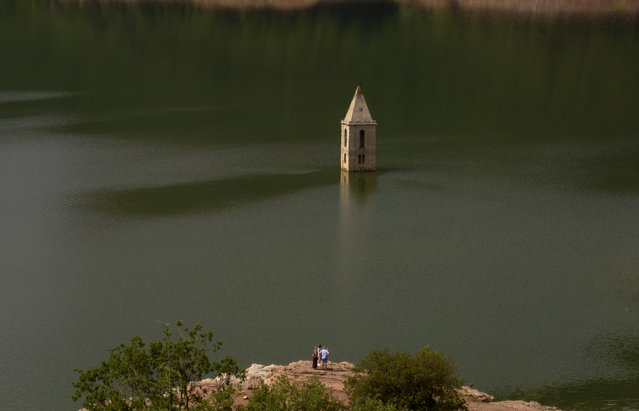 An 11th century Romanesque church, which is usually covered by water, is partially exposed in a reservoir in Vilanova de Sau, Catalonia, Spain, Monday, June 20, 2022. Spain's Ecological Transition ministry says 75% of Spanish land is vulnerable to desertification and this is increasing. (Photo by Emilio Morenatti/AP Photo) 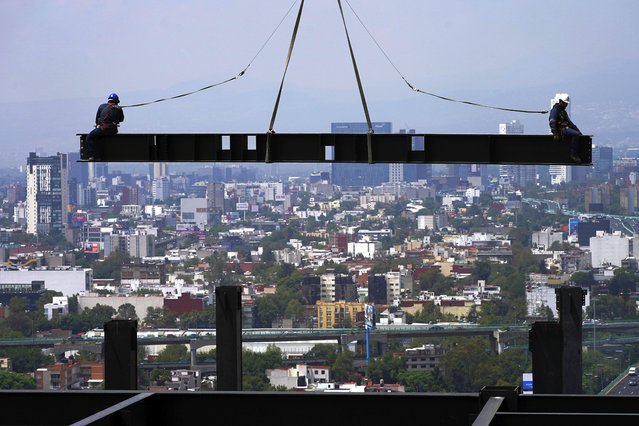 Construction workers ride on a beam hanging from a crane at the construction site of a residential high rise building in Mexico City, Friday, June 17, 2022. (Photo by Marco Ugarte/AP Photo) 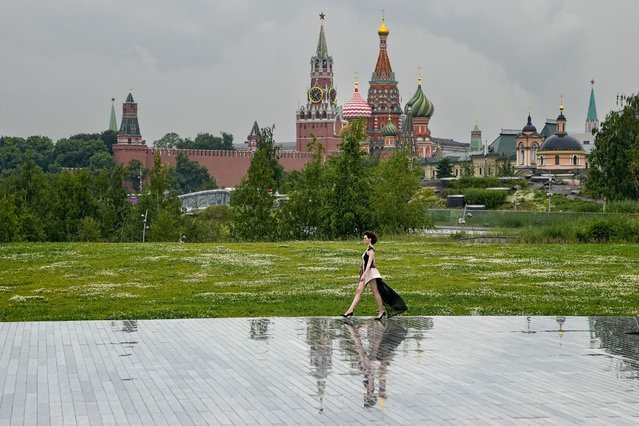 A model displays a collection by a group of Russian designers of the Moscow Art-Industrial Institute, during the Fashion Week at Zaryadye Park with the Spasskaya Tower and St. Basil's Cathedral in the background near Red Square in Moscow, Russia, Tuesday, June 21, 2022. (Photo by Alexander Zemlianichenko/AP Photo) 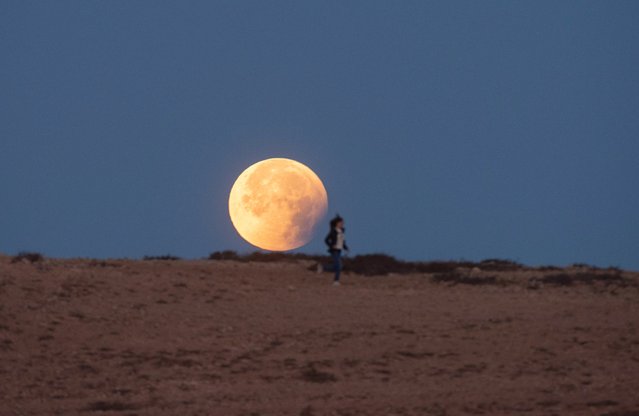 A woman runs in front the Moon during an eclipse in the village of Tindaya, Fuerteventura island, southwestern Spain, early 16 May 2022. (Photo by Carlos de Saa/EPA/EFE) 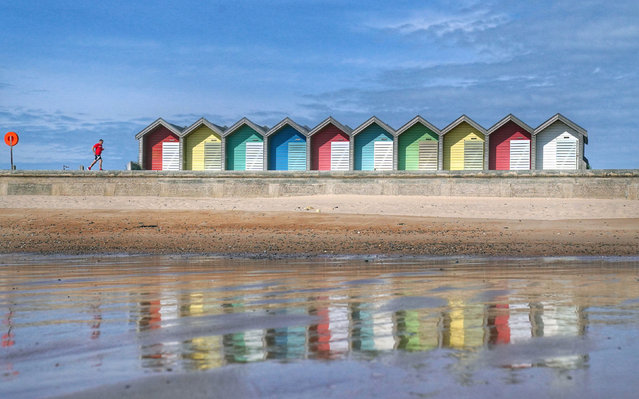 A runner out in the sunshine at Blyth beach in Northumberland on Thursday, June 16, 2022, on what is forecast to be the hottest day of the year so far. (Photo by Owen Humphreys/PA Images via Getty Images) 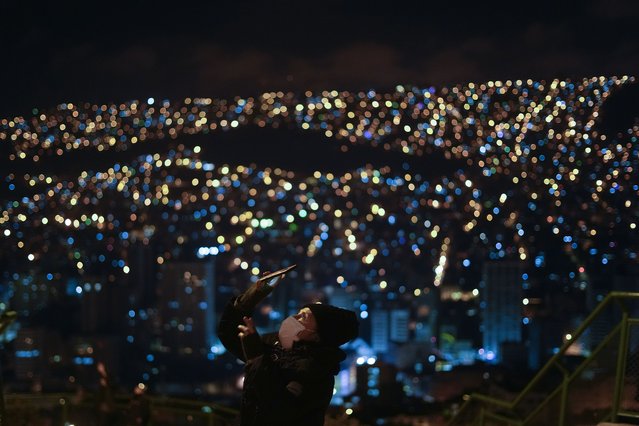 A woman takes a photo of the first blood moon lunar eclipse of the year at the Killi Killi lookout in La Paz, Bolivia, Sunday, May 15, 2022. (Photo by Juan Karita/AP Photo) 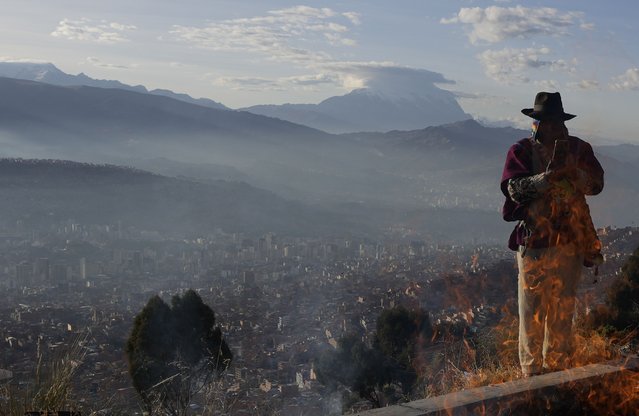 An Andean spiritual leader takes a photo with a smartphone during a New Year's ritual in El Alto, Bolivia, Tuesday, June 21, 2022. Aymara Indigenous communities are celebrating the 5,530th Andean New Year referred to as “Willka Kuti” or return of the sun in Aymara, coinciding with the southern hemisphere's June 21 winter solstice. (Photo by Juan Karita/AP Photo) 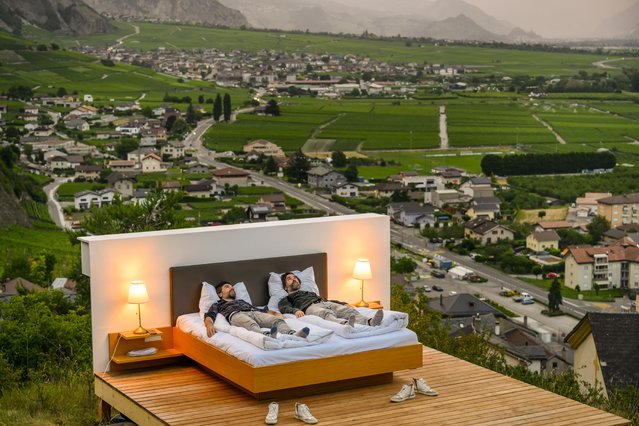 Swiss conceptual artists Frank and Patrik Riklin pose in their “idyllic” suite located on the heights of a hill, part of the project “Null Stern Hotel”, in Saillon, Switzerland, 15 June 2022. The Swiss conceptual artists Frank and Patrik Riklin and hotelier Daniel Charbonnier, who created since 2016 the “Null Stern Hotel” (Zero Star Hotel) launch an “anti-idyllic” version of their hotel concept. For the artists the current world situation lead to reflection on the urgency and necessity of a radical change in society. The “anti-idyllic” and the three idyllic “zero real estate” suites are open from 01 July to 18 September in the Saillon landscape. (Photo by Jean-Christophe Bott/EPA/EFE) 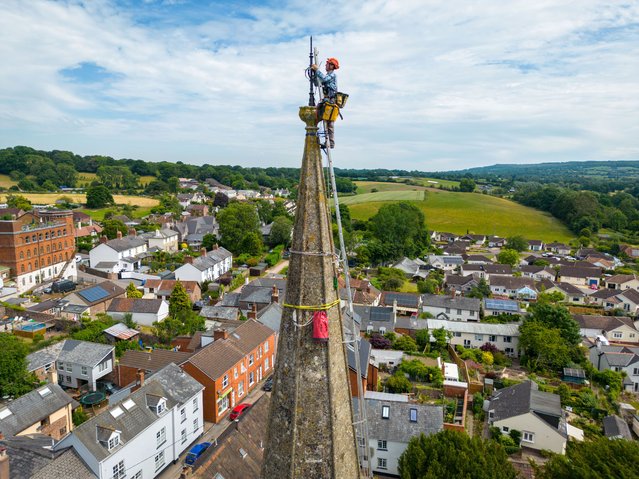 Arthur Needham from Vitruvius Building Conservation paints the lightning conductor on the steeple as part of restoration work at the top of St Mary’s Church, on June 23, 2022 in Uffculme, United Kingdom. (Photo by Finnbarr Webster/Getty Images) 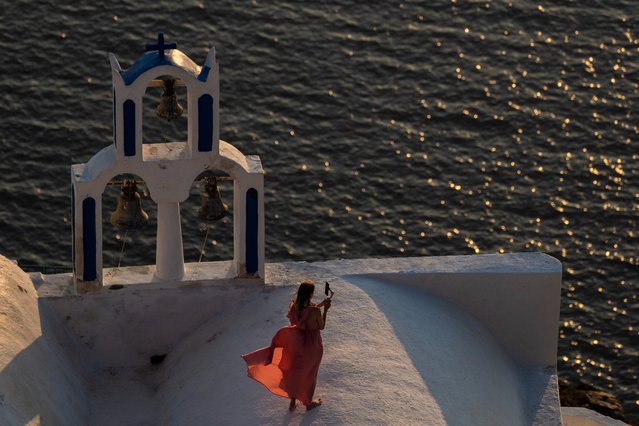 A woman takes pictures as she stands on the top of a Greek Orthodox Church while the sun sets in the Aegean Sea, in Santorini, Greece's Cyclades island, on Wednesday, June 15, 2022. (Photo by Petros Giannakouris/AP Photo)
Edit Del
04 Aug 2022 04:50:00, post received 0 comments
Publication archive:
←   →
Popular tags:
All tags
Last searches: