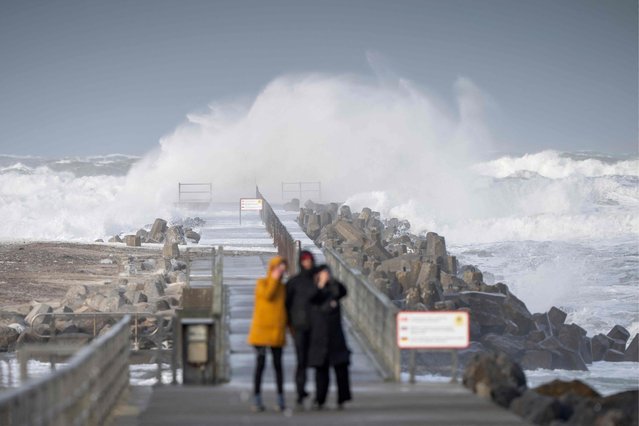 People walk on a wooden bridge on the coast of the North Sea amid spume as gusts of storm hit Noerre Vorupoer in North Jutland in Denmark, on January 27, 2022 (Photo by Bo Amstrup/Ritzau Scanpix via AFP Photo) 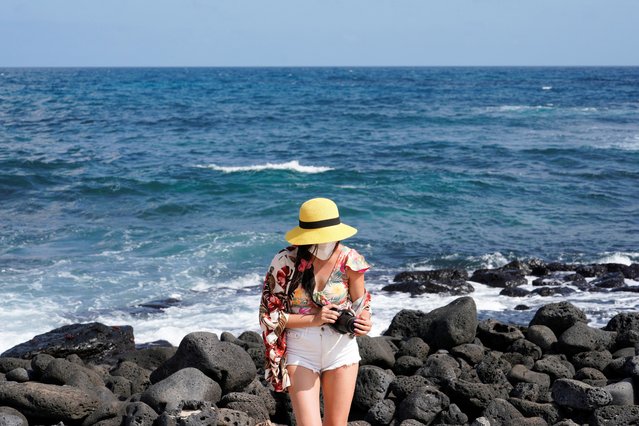 A tourist stands in front of the Pacific Ocean on Santa Cruz Island, after Ecuador announced the expansion of a marine reserve that will encompass 198,000 square kilometres (around 76,448 square miles), in the Galapagos Islands, Ecuador, January 16, 2022. (Photo by Santiago Arcos/Reuters) 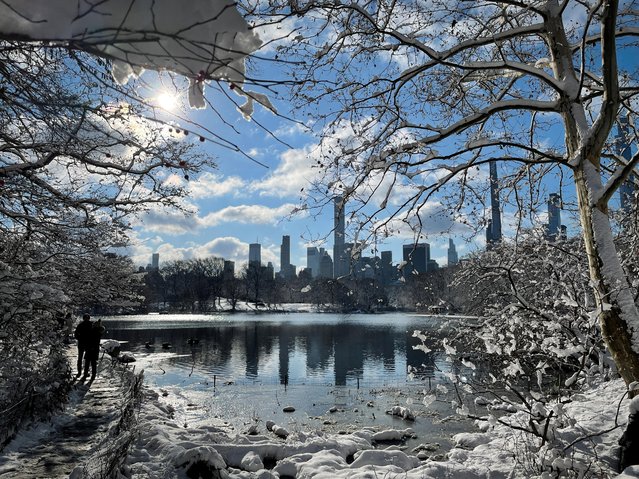 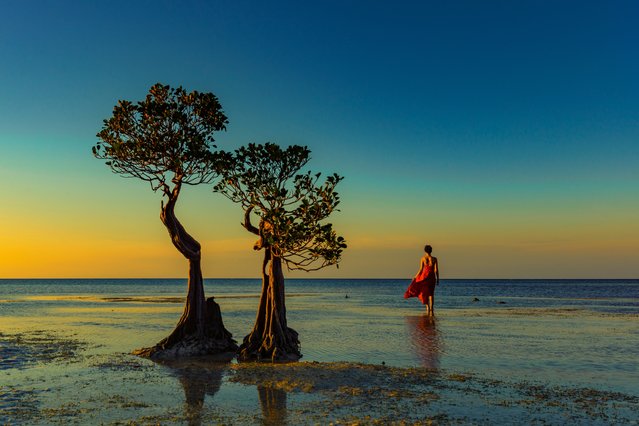 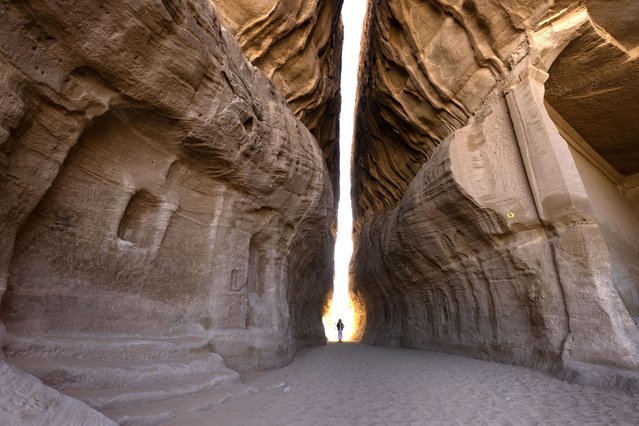 A partial view shows an ancient Nabataean carved tomb at the archaeological site of al-Hijr (Hegra), near the northwestern Saudi city of al-Ula, on January 31, 2022. Dating back to the first century BC, the archaeological site, which is now open to tourists, includes 111 tombs most of which boast a decorated facade, cave drawings and even some pre-Nabataean inscriptions. (Photo by Thomas Samson/AFP Photo) 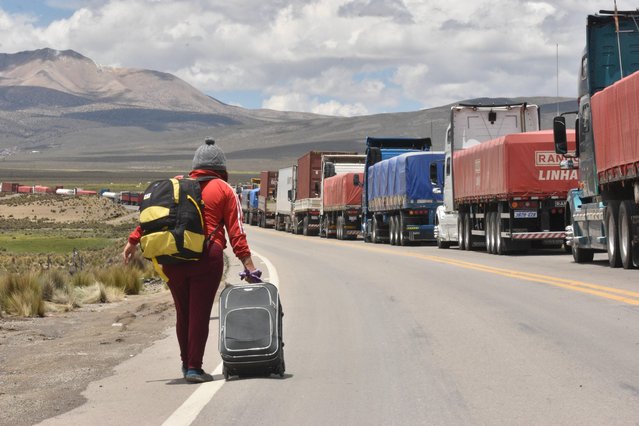 Dozens of trucks wait to cross the border into Chile, in Tambo Quemado, Bolivia, 13 January 2022. A commission from the Government of Bolivia arrived at Tambo Quemado, the main border post with Chile, to deliver food and medical support to hundreds of carriers who have been waiting for days to take Covid-19 tests on the Chilean side. (Photo by EPA-EFE/Stringer) 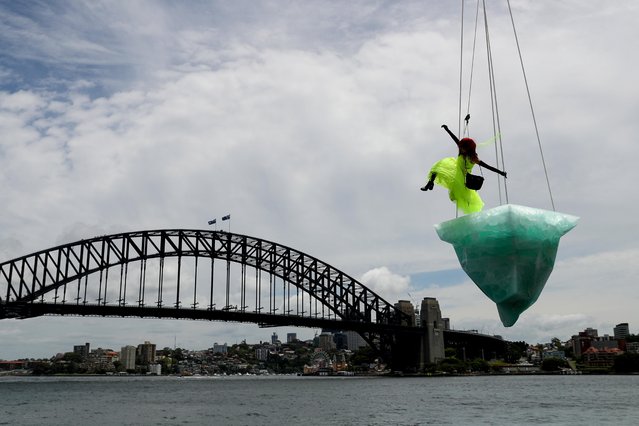 Vicki Van Hout performs atop a 2.7 tonne iceberg suspended above Sydney Harbour during the opening show of the Sydney Festival production ​Thaw, in Sydney, Australia, 14 January 2022. (Photo by Brendon Thorne/EPA/EFE) 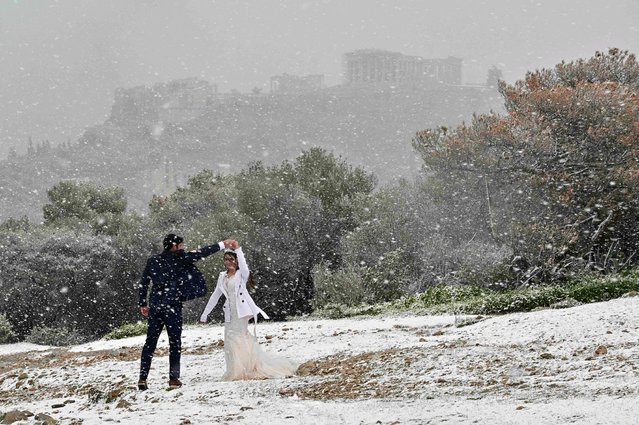 A newlywed couple from the US enjoys a snowfall during a photo shooting near the Acropolis in Athens on January 24, 2022. Schools are closed in greatest Athens area, as Greece exepriences a cold.weather front with heavy snowfalls and very low temperatures. (Photo by Louisa Gouliamaki/AFP Photo) 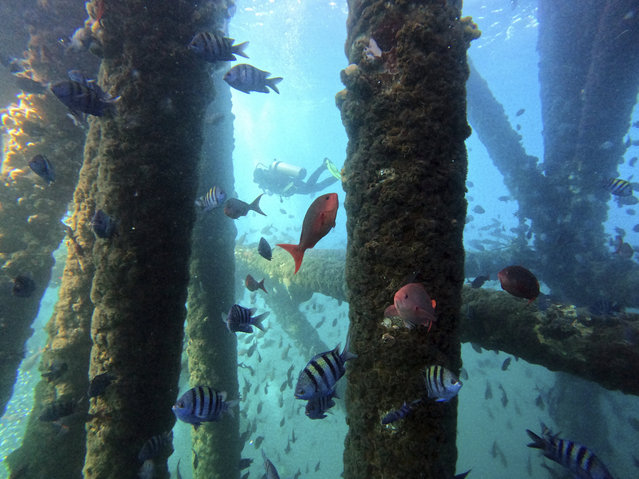 A man dives near an old oil platform during a tour organized by the Chelonia Dive Center in Los Organos in northern Peru, Friday, December 31, 2021. (Photo by Rodrigo Abd/AP Photo) 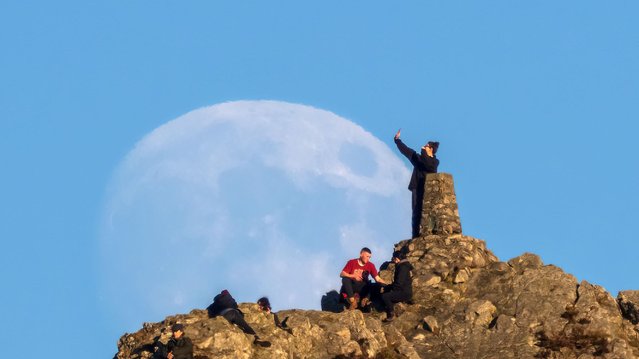 Thrill-seekers clamber up Manstone Rock in Shropshire in the West Midlands region of England on January 15, 2022 to take selfies on the rock formation known as Devil’s Chair. According to legend, the rocks were brought there by the devil himself. (Photo by Andrew Fusek-Peters/South West News Service) 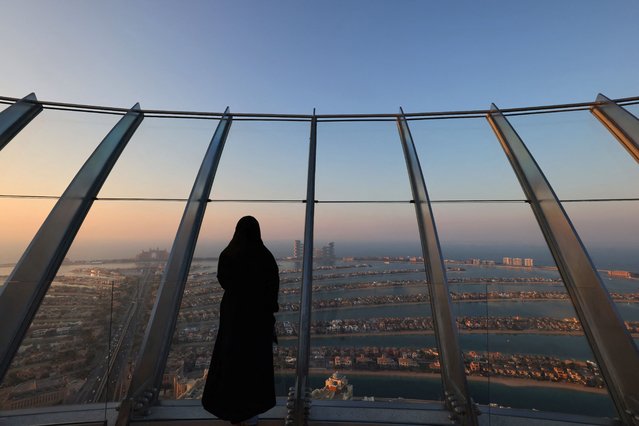 A woman stands at “the View at Palm” overlooking the Palm Jumeirah in the Gulf emirate of Dubai on January 10, 2022. (Photo by Giuseppe Cacace/AFP Photo) 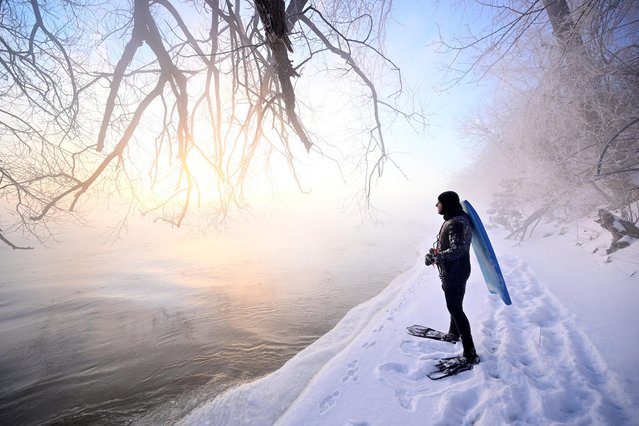 Carlos Hebert Plante prepares to dive into freezing waters to use his boogie board as extreme cold weather hits Montreal, Canada. It was minus 22 celsius as the sun was rising above the St. Lawrence river. The standing wave is behind the Habitat 67, an apartment building. January 21, 2022. (Photo by Bernard Brault/Reuters) 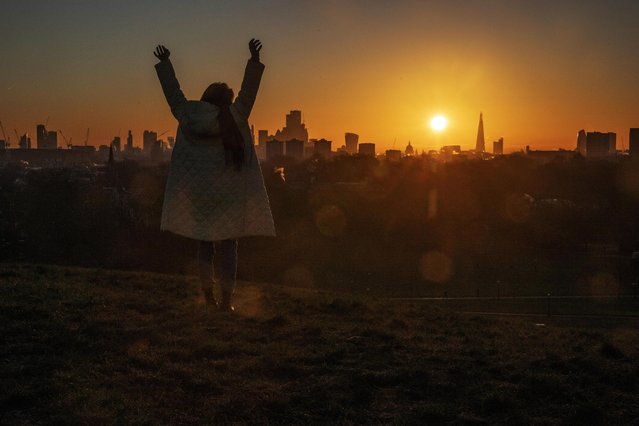 Early morning walkers at Primrose Hill, in London, enjoy a view of the sun rising over the Shard, St Paul’s and the City on January 21, 2022. (Photo by Jack Hill/The Times) 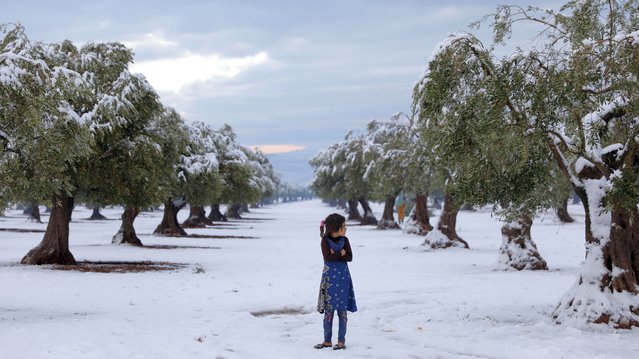 An internally displaced child atands at snow-covered Salat Zagrous Camp for internally displaced Syrians, in the Afrin District, Aleppo Governorate, northern Syria, 19 January 2022. A strong snowstorm and torrential rains hit several camps of displaced people in northwestern Syria on 19 January, causing roadblocks, destroying hundreds of tents and forcing dozens of families to abandon the area. United Nations Deputy Regional Humanitarian Coordinator for the Syria crisis Mark Cutts called for helping people urgently mainly in the Afrin and Azaz areas after camps in the area were cut off and many tents were buried in snow. (Photo by Yahya Nemah/EPA/EFE) 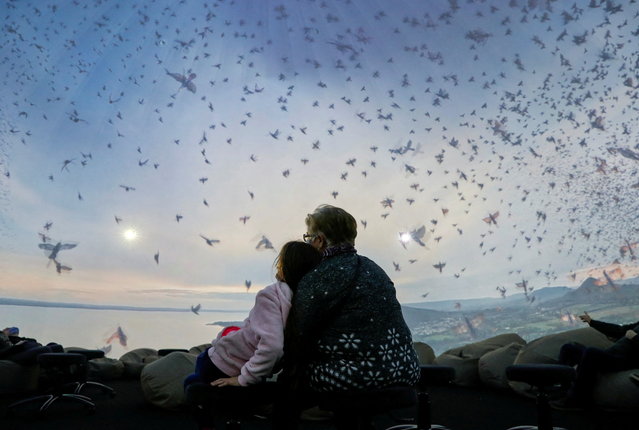