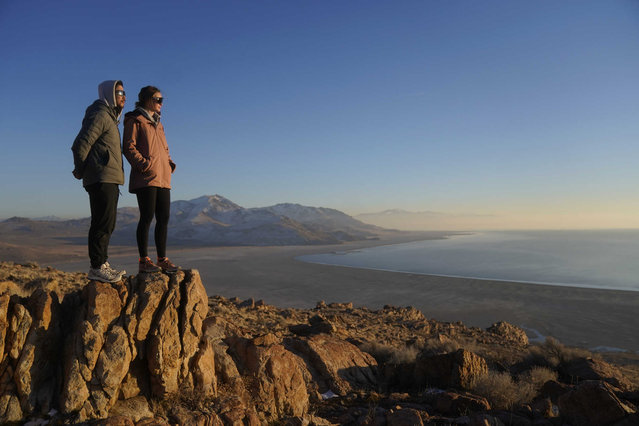 Antelope Island State Park visitors view the the receding edge of the Great Salt Lake Friday, January 28, 2022, at Antelope Island, Utah. The largest natural lake west of the Mississippi is shrinking past its lowest levels in recorded history, raising fears about toxic dust, ecological collapse and economic consequences. But the Great Salt Lake may have some new allies: conservative Republican lawmakers. (Photo by Rick Bowmer/AP Photo) 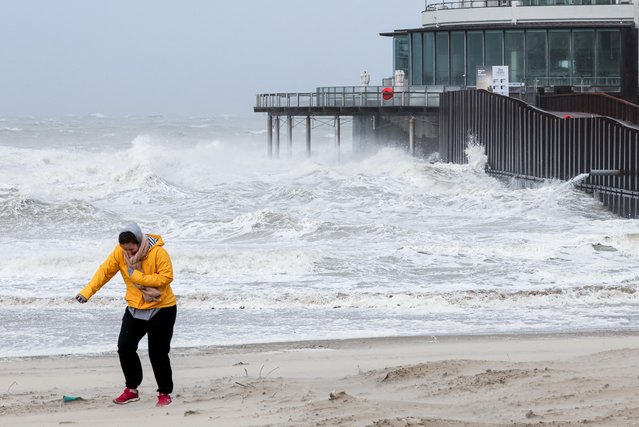 A person walks as waves break on the beach in the wake of Storm Eunice in Blankenberge, Belgium, February 18, 2022. (Photo by Yves Herman/Reuters) 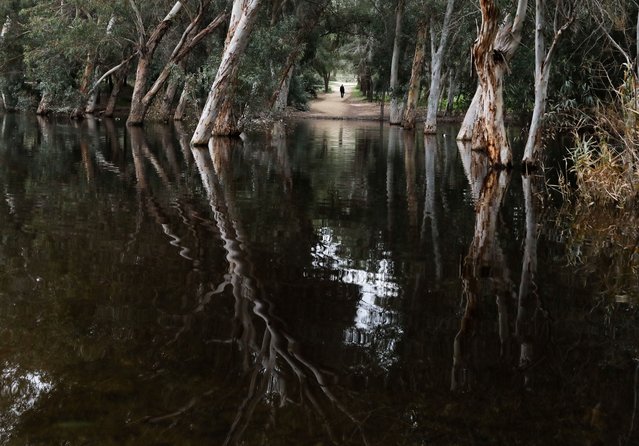 A man walks along Athalassas Park Lake in Nicosia, Cyprus on February 21, 2022. (Photo by Yiannis Kourtoglou/Reuters) 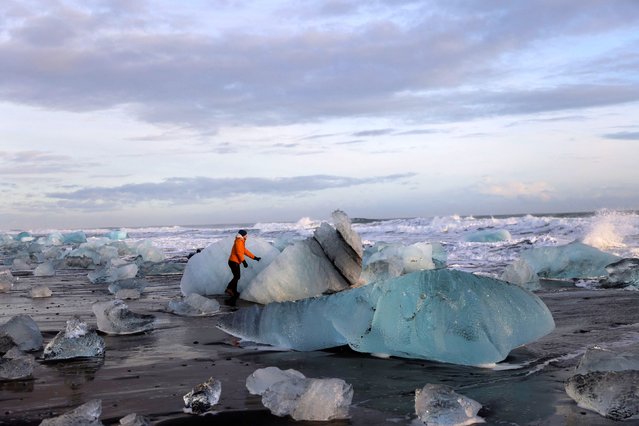 A tourist looks at the blocks of ice that have broken off Jokulsarlon glacier lagoon at Diamond beach during the winter in the southern coast of Iceland on February 17, 2022. (Photo by Nacho Doce/Reuters) 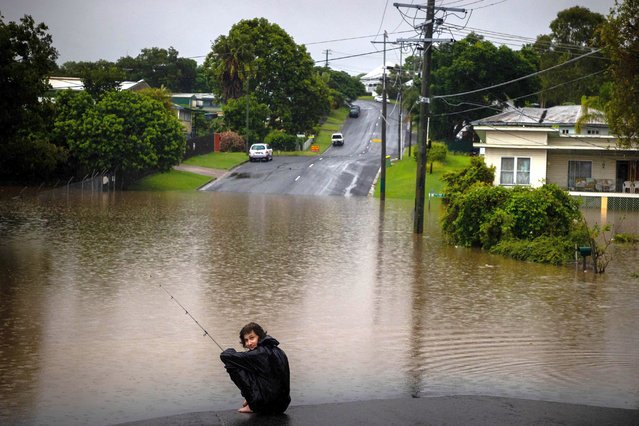 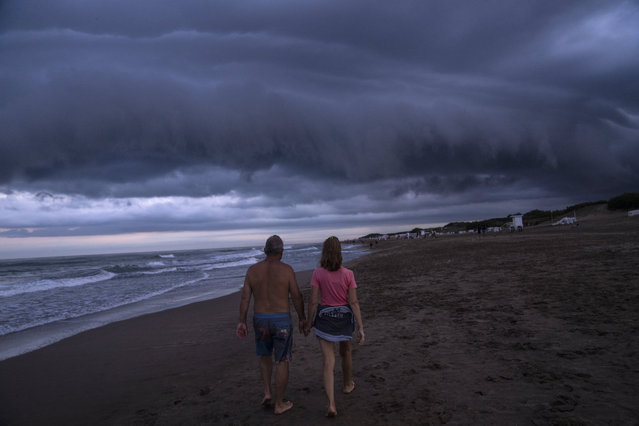 A couple walks on the beach during a rainy afternoon in Carilo, Argentina, Sunday, February 27, 2022. (Photo by Rodrigo Abd/AP Photo) 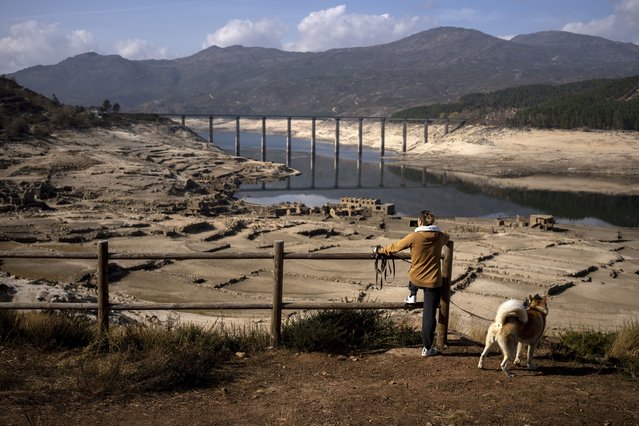 A man photographs the old village of Aceredo, submerged three decades ago when a hydropower dam flooded the valley and emerged now due to drought at the Lindoso reservoir, in northwestern Spain, Saturday, February 12, 2022. With rainfall levels this winter at one-third of the average in recent years, large swaths of Spain are experiencing extreme or prolonged drought. The situation is similar in neighboring Portugal, where 45% of the country was enduring “severe” or “extreme” drought conditions by the end of January, according to authorities. (Photo by Emilio Morenatti/AP Photo) 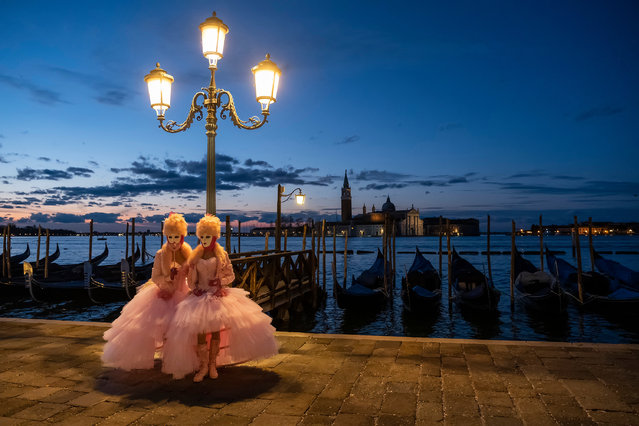 Masked revelers pose in St. Mark's Square on February 27, 2022 in Venice, Italy. The theme for the 2022 edition of the Venice Carnival is “Remember the Future” and will run from February 12 to March 1, 2022. (Photo by Stefano Mazzola/Getty Images) 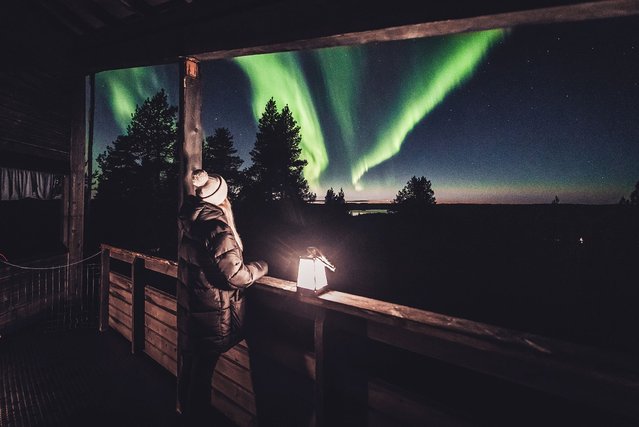 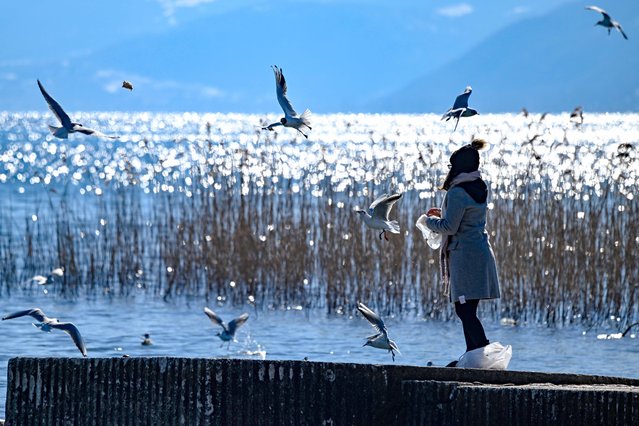 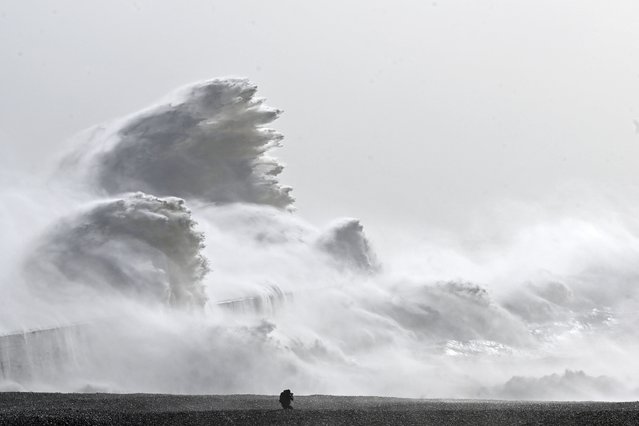 A photographer kneels on the beach as waves crash over Newhaven harbour wall in Newhaven, southern England on February 18, 2022, as Storm Eunice brings high winds across the country. Britain put the army on standby Friday and schools closed as forecasters issued two rare “red weather” warnings of “danger to life” from fearsome winds and flooding due to the approaching storm Eunice. (Photo by Glyn Kirk/AFP Photo) 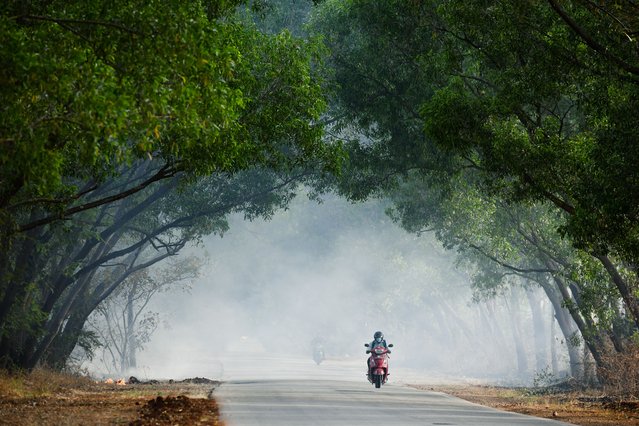 A motorist rides along a road past a thick plume of smoke from burning leaves on the outskirts of Bangalore on March 2, 2022. (Photo by Manjunath Kiran/AFP Photo) 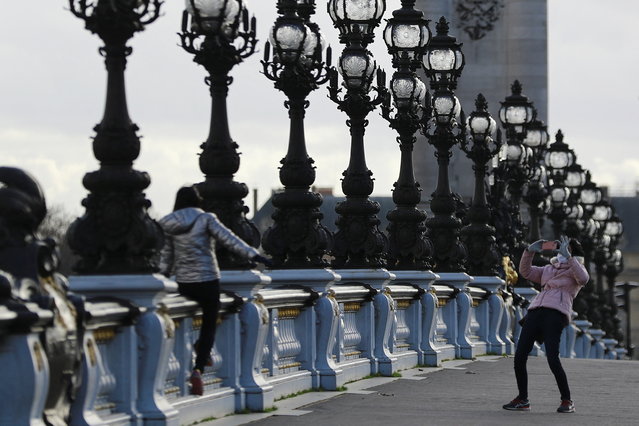