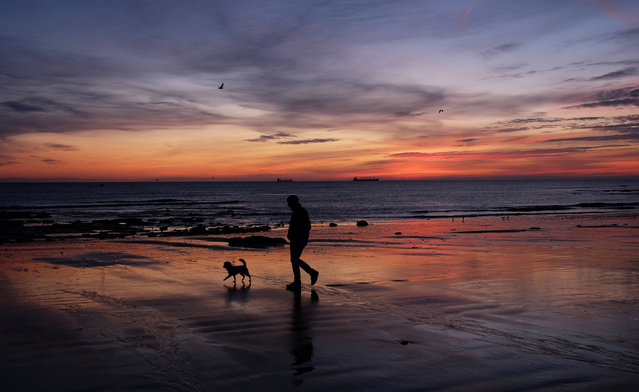 The sun rises over Whitley Bay in Northumberland, England on November 15, 2017. (Photo by Owen Humphreys/PA Images via Getty Images) 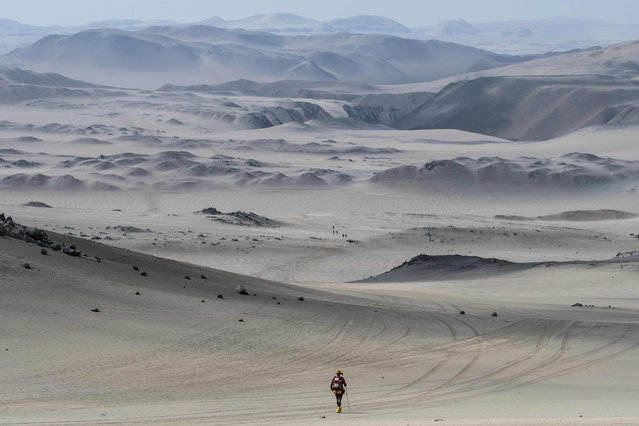 Competitors take part in the second stage of the first edition of the Marathon des Sables Peru between Coyungo and Samaca in the Ica Desert on November 29, 2017. Competitors compete in the race of approximately 250 kms, which is divided into six stages through the Ica Desert at a free pace and in self-sufficiency conditions from November 28 to December 4, 2017. (Photo by Jean-Philippe Ksiazek/AFP Photo) 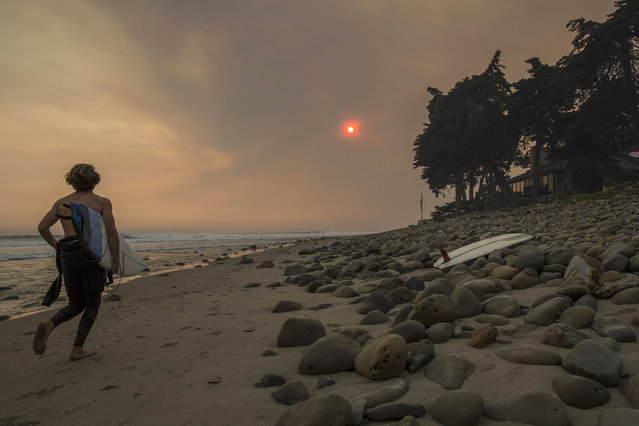 A smoke-filled sky filters sunlight to orange around a surfer as the Thomas Fire continues to grow and threaten communities from Carpinteria to Santa Barbara on December 12, 2017 in Carpinteria, California. The Thomas Fire has spread across 365 miles so far and destroyed about 800 structures since it began on December 5 in Ojai, California. (Photo by David McNew/Getty Images) 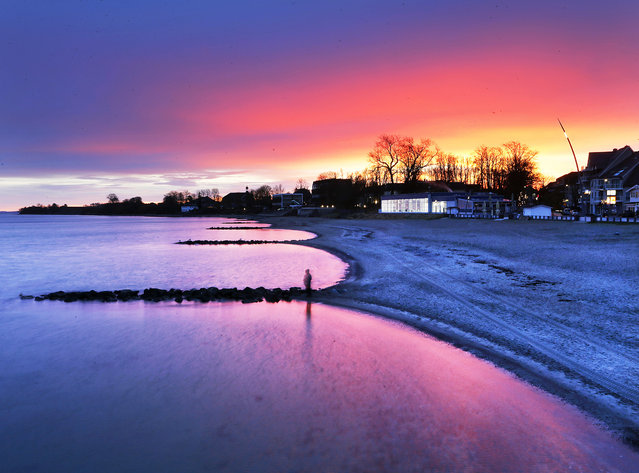 A woman stands at the shore of the Baltic Sea in Niendorf, northern Germany, just before sunrise on Wednesday, December 27, 2017. (Photo by Michael Probst/AP Photo) 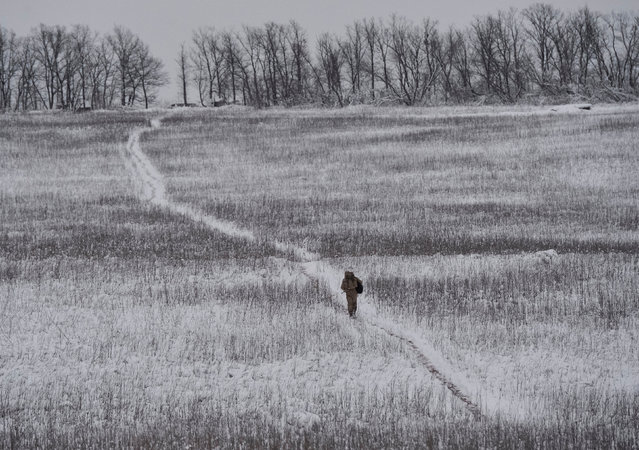 A Ukrainian serviceman is seen as he walks near the government-held village of Travneve, Ukraine, November 23, 2017. (Photo by Oleksandr Klymenko/Reuters) 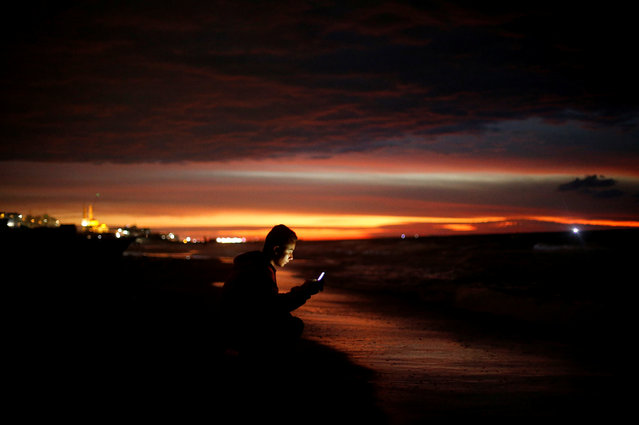 A Palestinian youth uses his mobile phone as he sits on a beach in the northern Gaza Strip on November 24, 2017. (Photo by Mohammed Salem/Reuters) 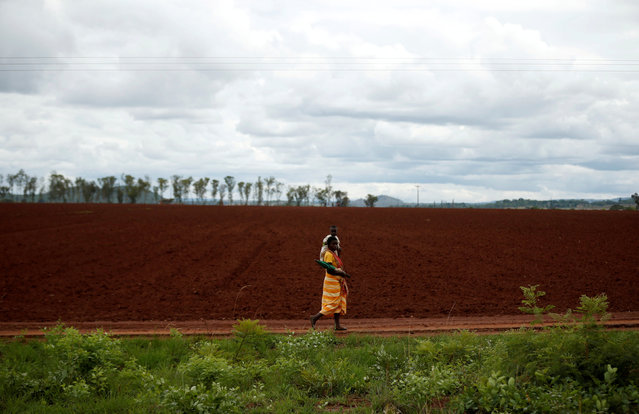 A Women carries a child as she walks past farm land at Chipfumbi outside Harare, Zimbabwe, November 28, 2017. (Photo by Siphiwe Sibeko/Reuters) 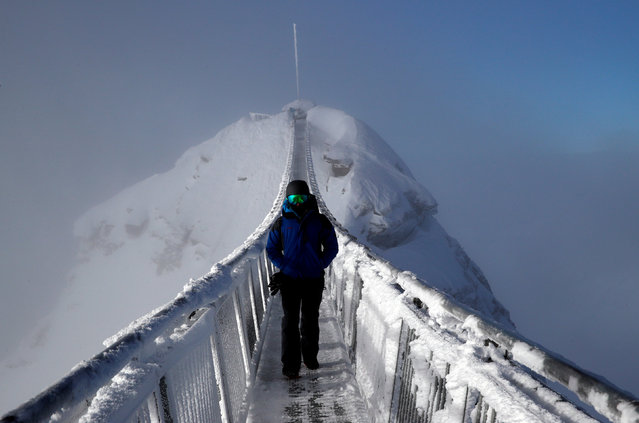 A snowboarder walks on the Peak Walk bridge at Glacier 3000 in Les Diablerets, Switzerland on December 20, 2017. (Photo by Denis Balibouse/Reuters) 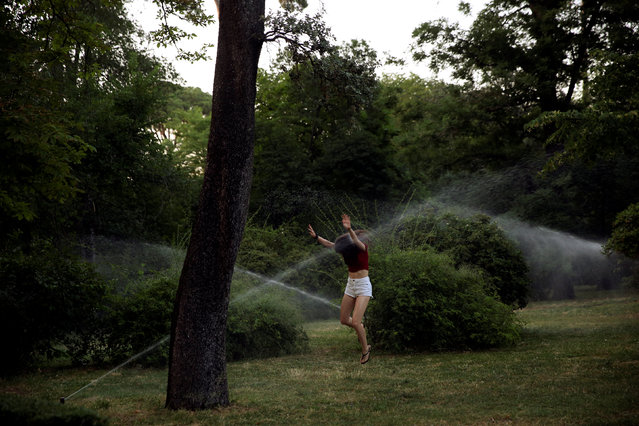 A young girl jumps in between water sprinklers in Retiro park in Madrid, Spain, June 14, 2017. (Photo by Susana Vera/Reuters) 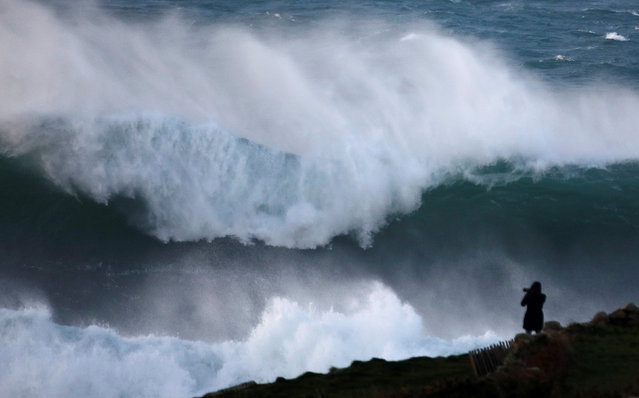 A photographer takes pictures of waves breaking on the Brittany coast at Audierne in western France, December 27, 2017. (Photo by Mal Langsdon/Reuters) 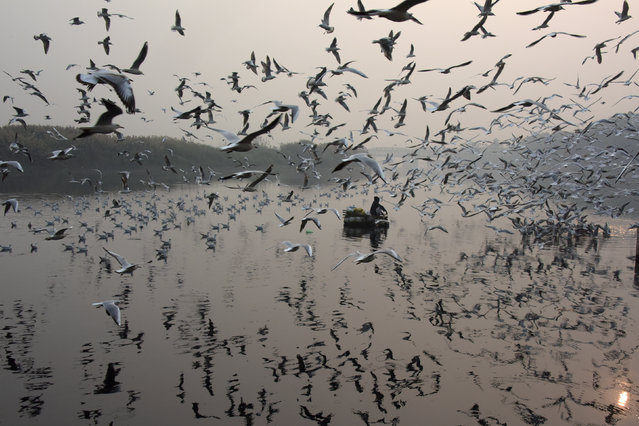 An Indian man feeds seagulls on the Yamuna River in New Delhi on November 15, 2017. (Photo by Dominique Faget/AFP Photo) 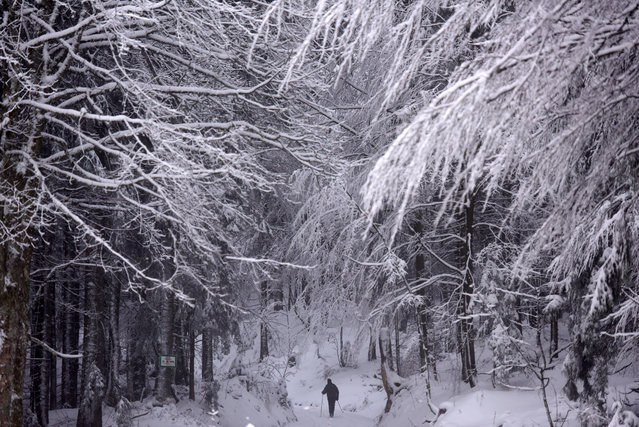 A cross-country skier makes his way through the snow on November 26, 2017 near Hofsgrund on the Schauinsland mountain in the Black Forest, southwestern Germany. (Photo by Patrick Seeger/AFP Photo/DPA) 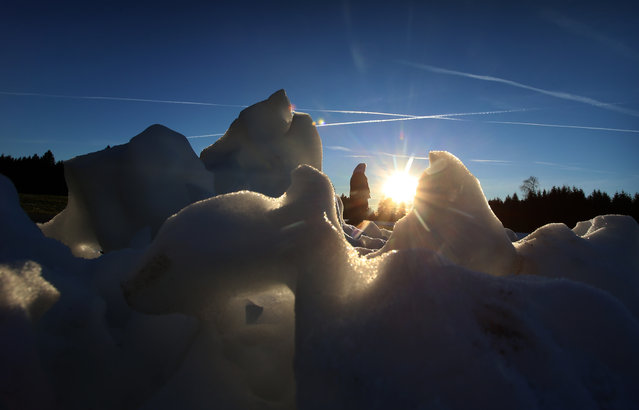 A picture taken on December 25, 2017 shows a woman walking as the sun shines over a snow-covered landscape near Ruderatshofen, southern Germany. (Photo by Karl-Josef Hildenbrand/AFP Photo/DPA) 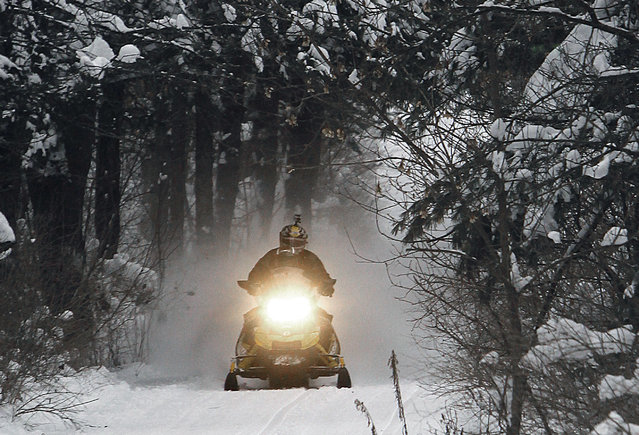 In this December 31, 2012 file photo, a snowmobile travels a newly-groomed trail in East Montpelier, Vt. With plenty of fresh snow covering much of northern New England, the 2017 winter snowmobile season is off to a good start. (Photo by Toby Talbot/AP Photo) 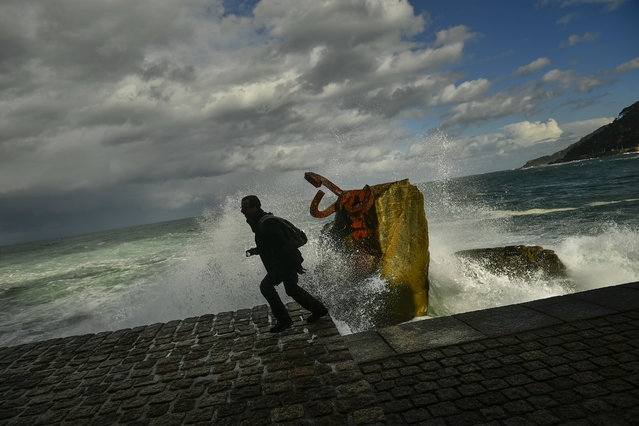 A man runs as a giant wave crashes against the sea defences during a high tide in San Sebastian, northern Spain, Monday, December11, 2017. Spain and Portugal have issued warnings of high winds and heavy rain as a storm reaches the Iberian Peninsula from the Atlantic. (Photo by Alvaro Barrientos/AP Photo) 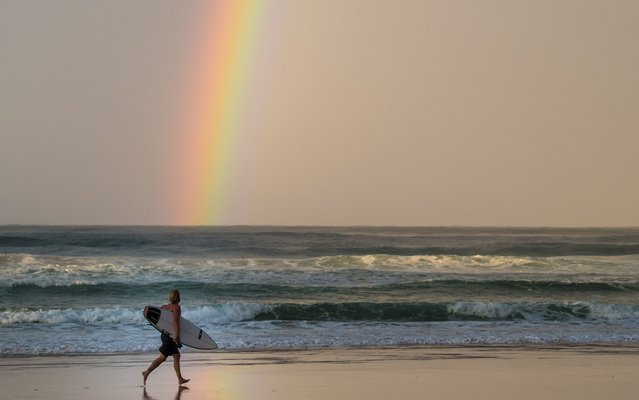 A surfer on Coolangatta beach, Queensland, Australia with a rainbow in the background on December 5, 2017. (Photo by James Gourley/Rex Features/Shutterstock) 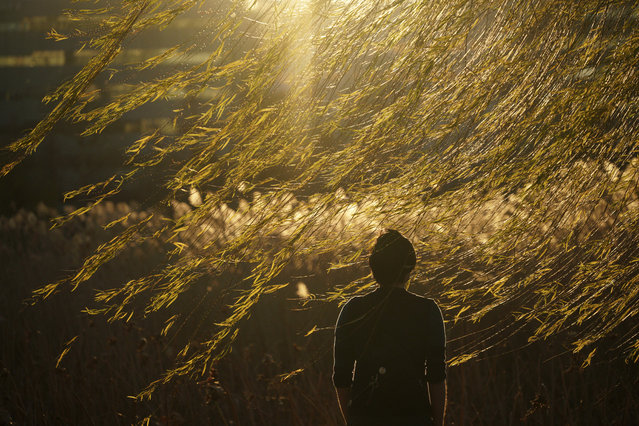 As the sun lights the leaves on a tree branch, a man looks into a lake at the Ueno Park at dusk in Tokyo Wednesday, December 27, 2017. (Photo by Eugene Hoshiko)/AP Photo 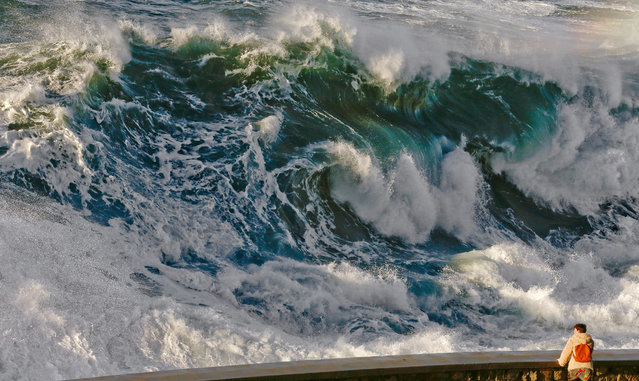 A man watches the huge waves which brakes at the Paseo Nuevo's promenade in San Sebastian, Basque Country, Spain on 11 January 2016 where the wind has reached to 90 km/h and have been registred waves of eight kilometres due to the bad weather. (Photo by Juan Herrero/EPA/EFE) 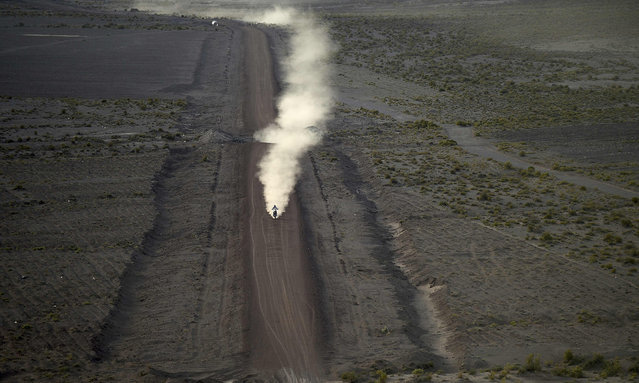