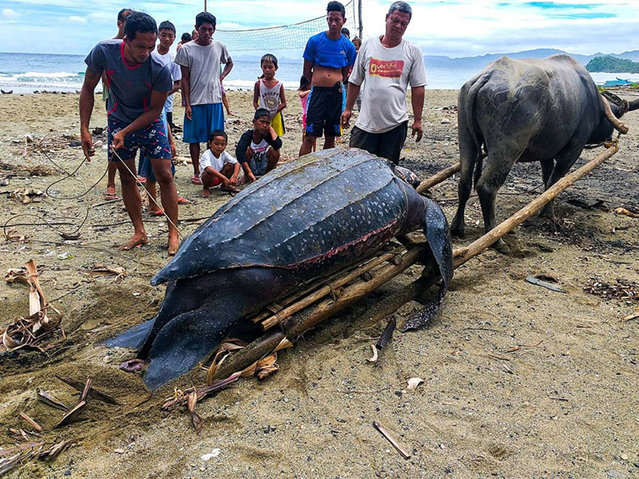 A handout photo made available by the Department of Environment and Natural Resources (DENR) of the Philippines shows villagers looking at a dead giant leatherback sea turtle which was found along a shoreline of Barangay Caraosan, in the coastal town of Bula, Camarines Sur province, Philippines, 29 July 2019 (issued 30 July 2019). According to reports, the leatherback sea turtle was already dead and entangled with a rope when it was found. Investigators believed that there was an attempt to catch the marine animal but the catchers might have backed off because of its weight. The environment department is conducting an information campaign to educate public awareness on protecting wildlife. (Photo by Department of Environment and Natural Resources/EPA/EFE) 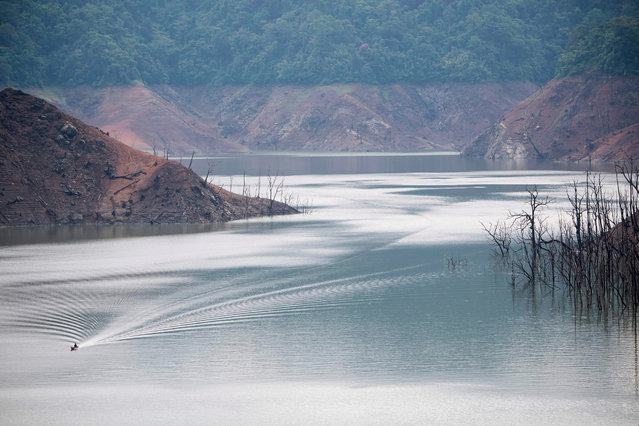 This photo taken on June 27, 2019 shows a fisherman of the Dumagat tribe commuting on a boat at Angat Dam in Norzagaray, Bulacan. Angat dam supplies Metro Manila and nearby provinces with water. Manila has been hit by its worst water shortage in years, leaving bucket-bearing families to wait hours for a fill up from tanker trucks and some hospitals to turn away less urgent cases. (Photo by Noel Celis/AFP Photo) 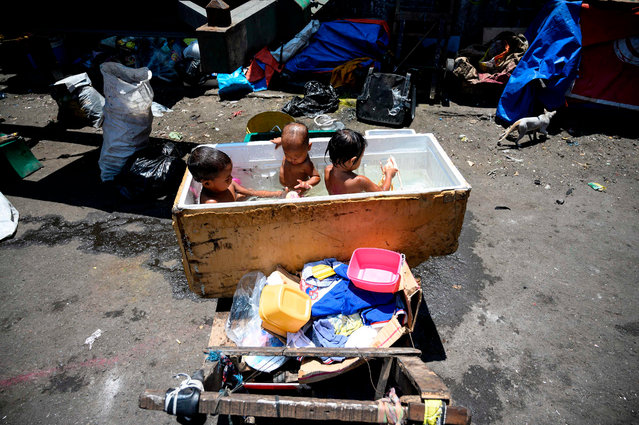 Children bathe in a makeshift tub from a discarded refrigerator in Manila on June 9, 2019. (Photo by Noel Celis/AFP Photo) 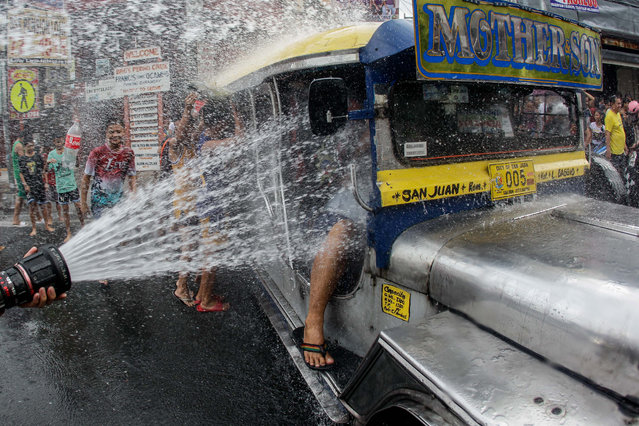 People riding in a jeepney are doused with water during the “Wattah-Wattah Festival” celebrated on Saint John the Baptist' Feast Day in San Juan City, east of Manila, Philippines, 24 June 2019. Local residents and visitors celebrate by dousing each other with water and with good cheer in honor of the city's patron saint John the Baptist, who is popularly known in Catholicism as the one who baptized Jesus Christ. (Photo by Mark R. Cristino/EPA/EFE) 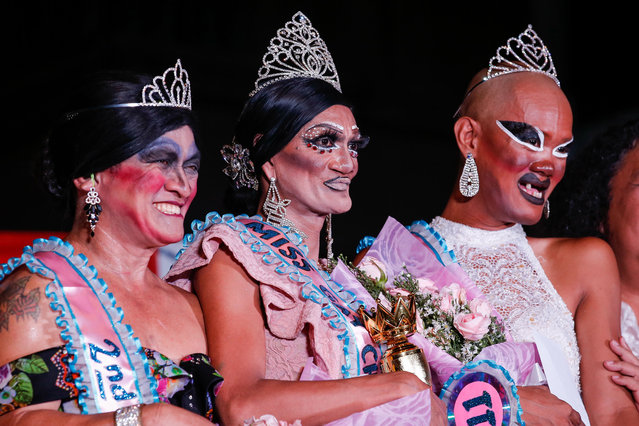 Joel Pedrigal (C) alias “Angel Locsin” poses for pictures with Rolando Picazo (L) alias “Chamcey Supot” and Ariel Bacierra (R) alias “Bea Bunda” after winning the Miss Gay Chararat 2019, a gay beauty contest in Makati, south of Manila, Philippines, early 11 June 2019. Bacierra and Picazo came in second and third, respectively. The pageant is a project of the Committee on Cultural Affairs and Barangay Council in San Antonio, Makati as part of their one week festival honoring Saint Anthony of Padua and in celebration of the LGBT (lesbian, gay, bisexual and transgender) Pride month. Gay beauty pageants have been organized in the Philippines since the late 1970s. Contestants come from different backgrounds and professions with ages ranging from fourteen to more than sixty years old. In recent years, the country saw how gay pageants evolved from being part of local festivities to mainstream social spectacles at the national and even international level. Contestants regard pageants as opportunities to express their creativity, to create awareness against discrimination and to advocate for the recognition of their legal rights. Despite the strides made to break gender stereotypes, the LGBT community in the Philippines still feels that much has to be done to achieve acceptance and equality in a conservative and religiously-biased society. LGBT groups have continuously called for equal rights including legalization of same-s*x marriage and the passage of the Anti-Discrimination Bill. At the end of June, thousands of members and supporters of the LGBT community are expected to join the LGBT Pride March. (Photo by Mark R. Cristino/EPA/EFE) 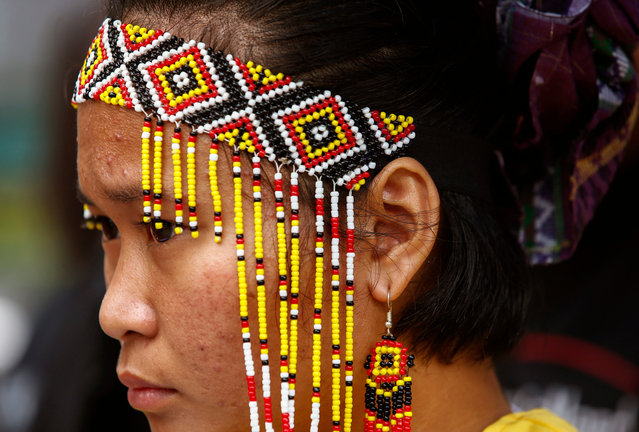 A Manobo indigenous person participates in a rally held by human rights advocates and representatives from Filipino indigenous tribes outside the Armed Forces of the Philippines camp in Quezon City, Philippines, 09 August 2019. The rally marked International Day of the World's Indigenous Peoples. The protesters called for an end to the harassment of indigenous groups by government security forces and an end to the damage done to indigenous lands by private firms. (Photo by Rolex dela Peña/EPA/EFE) 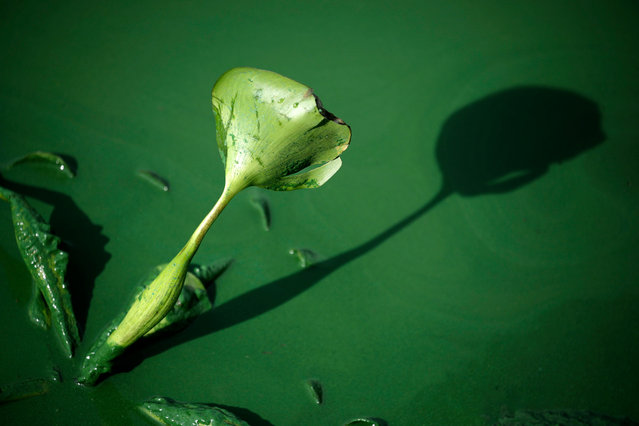 Green algae is visible on the waters of Laguna lake in Muntinlupa city, south of Manila, Philippines, 10 June 2019. The Muntinlupa City Health Office said they received complaints from residents of foul stench attributed to decaying algae along the banks of Laguna Lake, but according to environmental experts, the algae is beneficial to aquatic populations as it is food for the fishes. (Photo by Francis R. Malasig/EPA/EFE) 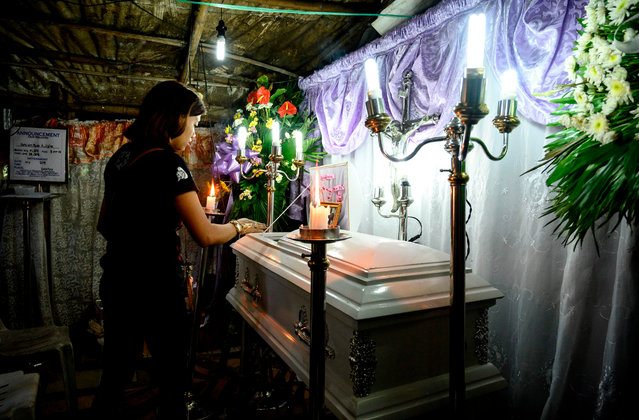 The mother views the coffin of her 3 year old baby Kateleen Myca Ulpina, killed during a sting operation conducted by the police, is seen during her wake in Rodriguez, Rizal, east of Manila on July 5, 2019. A Philippine senator who initially led President Rodrigo Duterte's deadly drug war sparked outrage when he dismissed the killing of a toddler in a police anti-narcotics operation with an expletive and as collateral damage. (Photo by Noel Celis/AFP Photo) 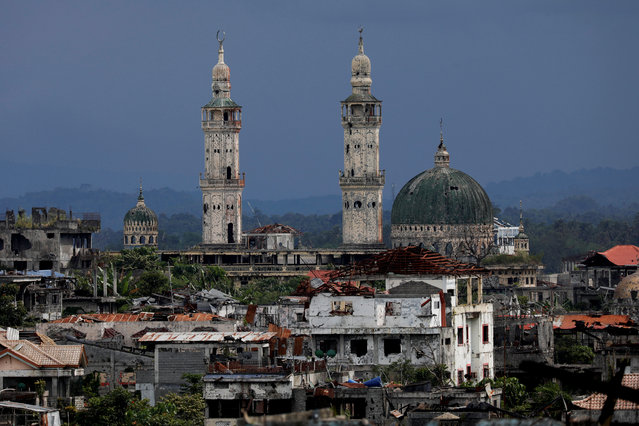 Dilapidated structures are seen at the most affected war-torn area of Marawi City, Lanao del Sur province, Philippines, May 11, 2019. The area remains abandoned two years since pro-Islamic State militants began their attacks on May 23, 2017. Marawi was once one of the most picturesque cities in the Philippines. About half of it is now charred concrete and skeletons of buildings, the effects of 154 days of air strikes and artillery by the military, and booby traps the rebels laid everywhere to keep them at bay. (Photo by Eloisa Lopez/Reuters) 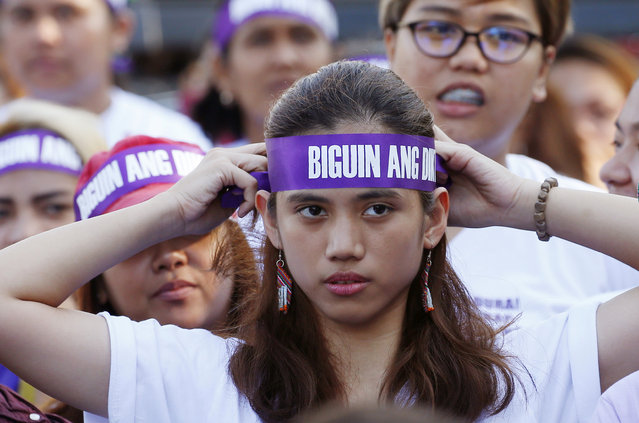 In this March 8, 2018, file photo, a protester adjusts her headband reading “Frustrate the dictatorship!” during a rally at a Manila square to mark International Women's Day which largely turns out to be an anti-government event in Manila, Philippines. The Philippine president signed Tuesday, July 16, 2019 a bill into law penalizing a range of acts of sexual harassment including catcalling, wolf-whistling and persistent telling of sexual jokes, which pro-women's groups have accused him of committing. (Photo by Bullit Marquez/AP Photo/File) 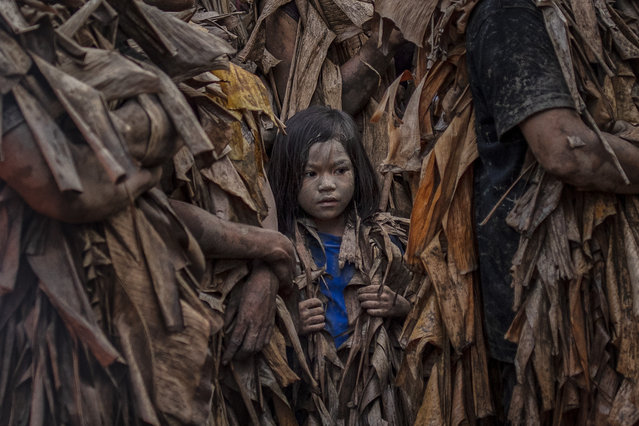 Devotees covered in mud and dried banana leaves take part in the Taong Putik (“mud people”) Festival on June 24, 2019 in the village of Bibiclat in Aliaga town, Nueva Ecija province, Philippines. Each year, the residents of Bibiclat village in Aliaga town celebrate the Feast of Saint John by covering themselves in mud, dried banana leaves, vines, and twigs as part of a little-known Catholic festival. According to locals, the Taong Putik festival (literally meaning “mud people festival”), traces its history from the Pacific War and reenacts how rain stopped the execution of 14 villagers by Japanese soldiers in 1944. The townsfolk considered this as a miracle from Saint John, and every year since then the villagers roll in mud to show their gratitude to the saint. The Feast Day of Saint John the Baptist is celebrated throughout the country every June 24. The Philippines is the only Southeast Asian country with a predominantly Catholic majority. (Photo by Ezra Acayan/Getty Images) 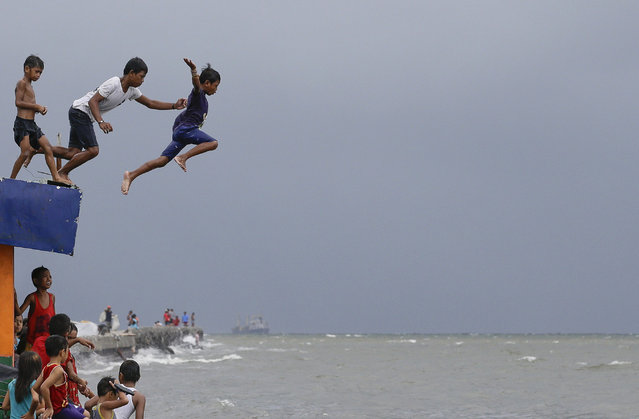 Boys jump into the water despite strong waves after a strong downpour at Manila's bay, Philippines, Wednesday, July 17, 2019. Schools in metropolitan Manila have been suspended as Tropical Storm Danas, locally named Falcon, continue to enhance the southwest monsoon as it maintains its strength bringing heavy rains over parts of Luzon and Visayas according to the Philippine Atmospheric Geophysical and Astronomical Services Administration. (Photo by Aaron Favila/AP Photo) 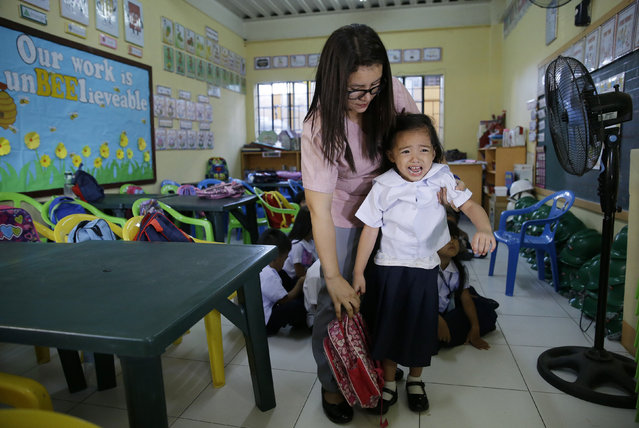 A Filipino teacher tries to prevent a crying student from getting out of the classroom during the first day of school at the President Corazon C. Aquino Elementary School in metropolitan Manila, Philippines on Monday, June 3, 2019. About 27 million students are expected to troop back to schools amid perennial problems like overcrowded classrooms and lack of teachers and desks. (Photo by Aaron Favila/AP Photo) A commuter holding his shoes rides on a tricyle through a flooded street, caused by a heavy downpour brought about by the southwest moonson, in Manila on August 2, 2019. (Photo by Ted Aljibe/AFP Photo) 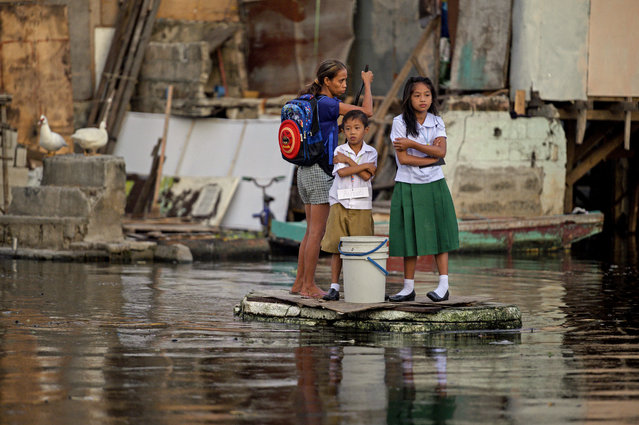 Elementary students, living on flooded Artex Compound, ride on makeshift boat to attend the first day of school in Panghulo 1 Elementary School in Malabon, north of Manila on June 3, 2019. Twenty three million students will be trooping back to their respective schools nationwide. (Photo by Noel Celis/AFP Photo) 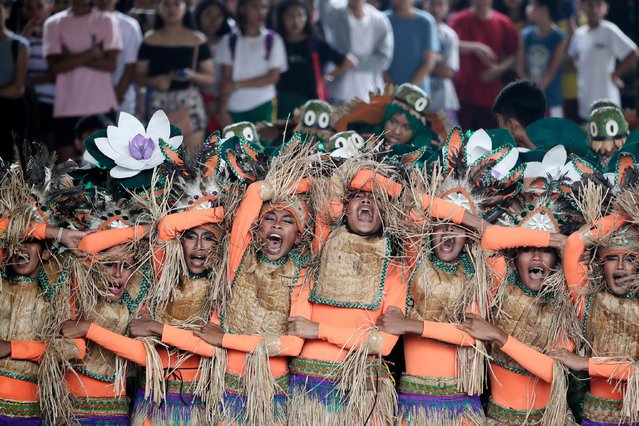 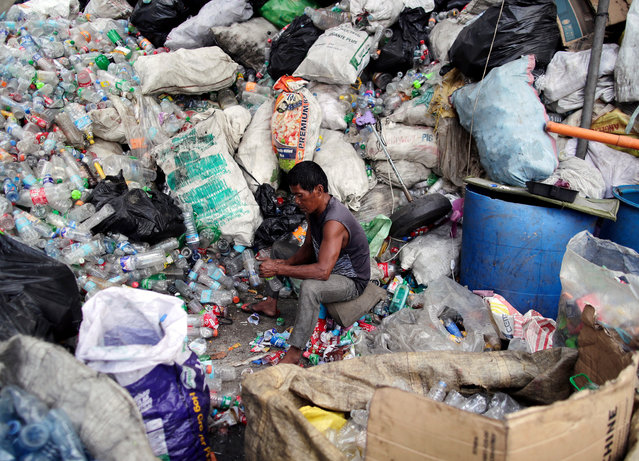 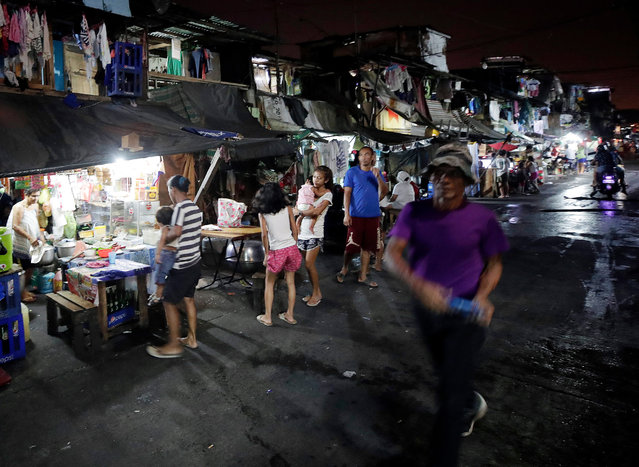 Filipino informal settlers are seen in front of shanties at a slum area in Manila, Philippines, 28 February 2019 (issued 13 June 2019). The metropolitan area of Manila has the largest slum area in the world, home to some four million people, a third of the inhabitants of the city, according to studies conducted by humanitarian organizations. (Photo by Francis R. Malasig/EPA/EFE) 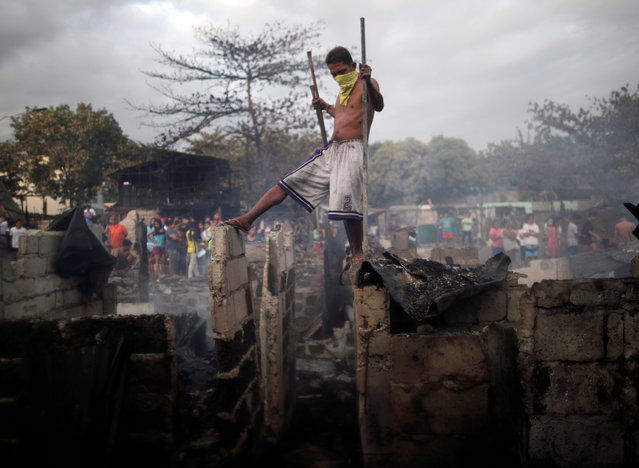 A Filipino informal settler manuevers on top of burnt shanties after a fire at a slum area in Paranaque city, south of Manila, Philippines, 22 February 2019 (issued 13 June 2019). The metropolitan area of Manila has the largest slum area in the world, home to some four million people, a third of the inhabitants of the city, according to studies conducted by humanitarian organization. (Photo by Francis R. Malasig/EPA/EFE) 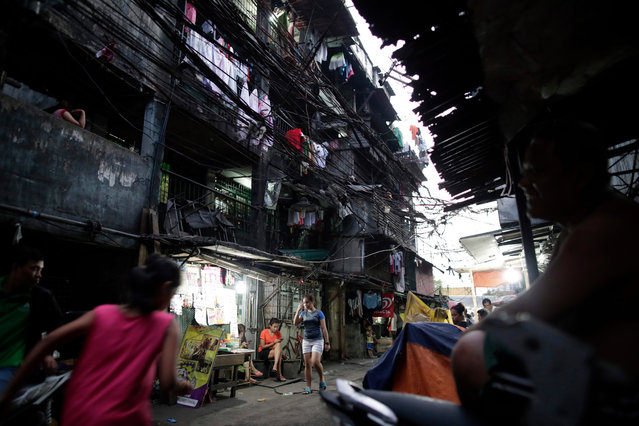 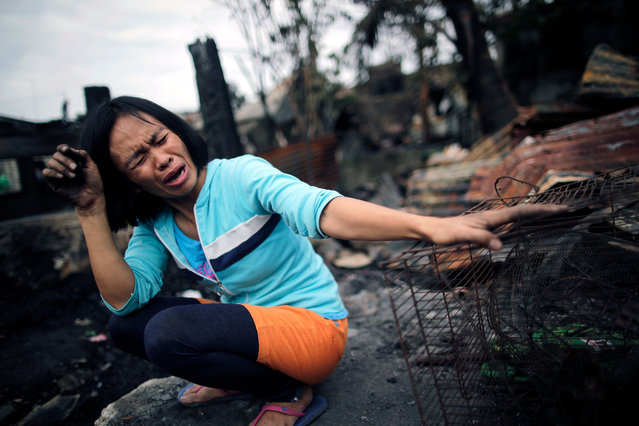 A Filipino informal settler cries next to her burnt home after a fire at a shantytown in Paranaque city, south of Manila, Philippines, 23 February 2019 (issued 13 June 2019). (Photo by Francis R. Malasig/EPA/EFE) 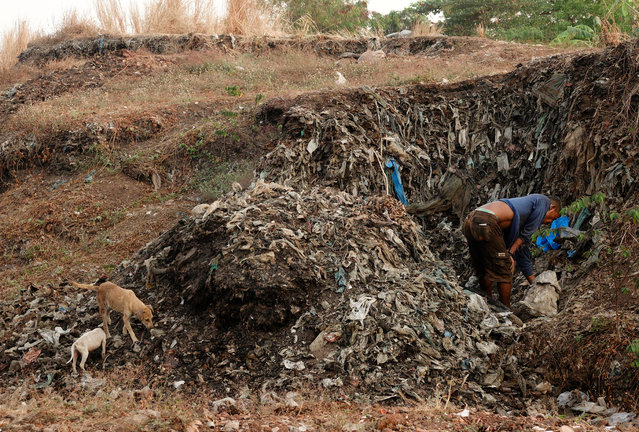 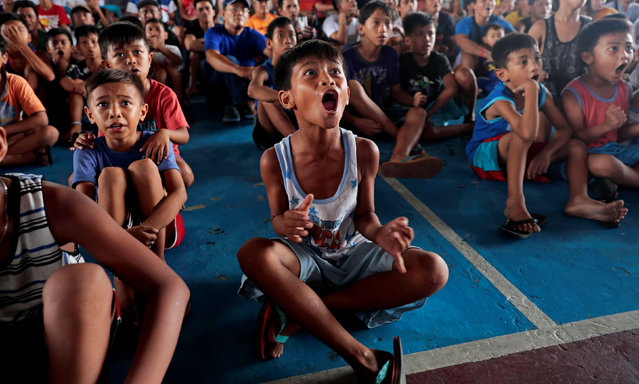