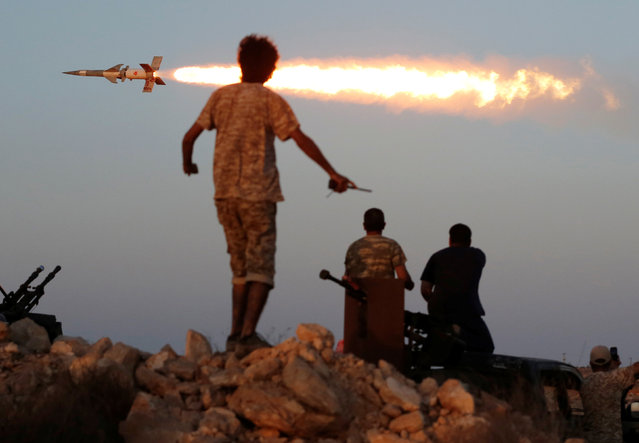 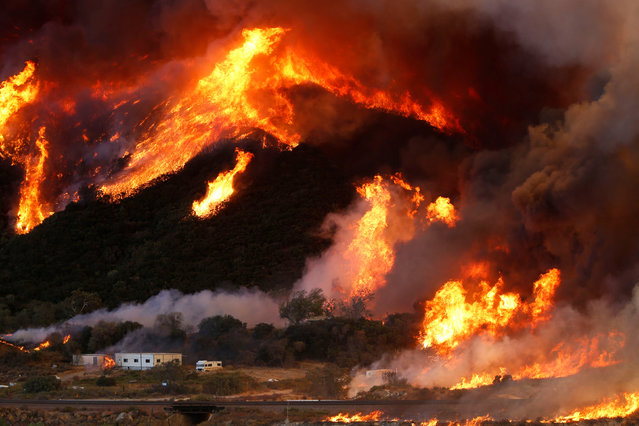 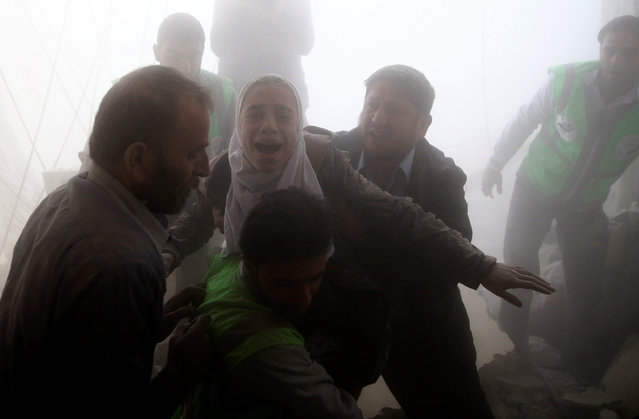 Men evacuate a girl from a site hit by an airstrike in the rebel-held Douma neighbourhood of Damascus, Syria November 7, 2016. (Photo by Bassam Khabieh/Reuters) 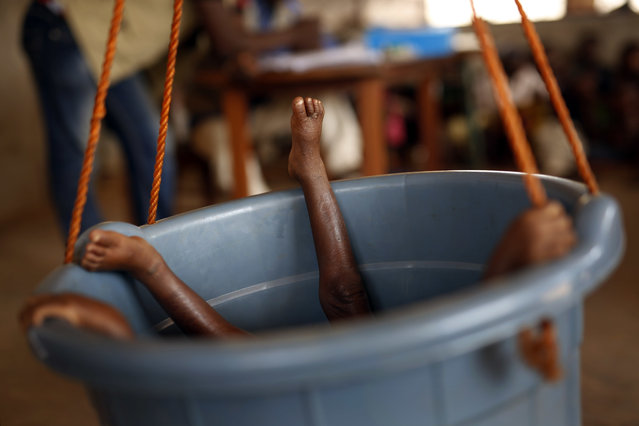 A young child lies in a bucket to be weighed by nurses in Bangui, Central African Republic, on February 11, 2016. The United Nations World Food Program estimates that nearly half the country - 2.5 million people - are facing hunger as more than two years of violence have severely disrupted the country's agriculture and health care sectors. (Photo by Jerome Delay/AP Photo) 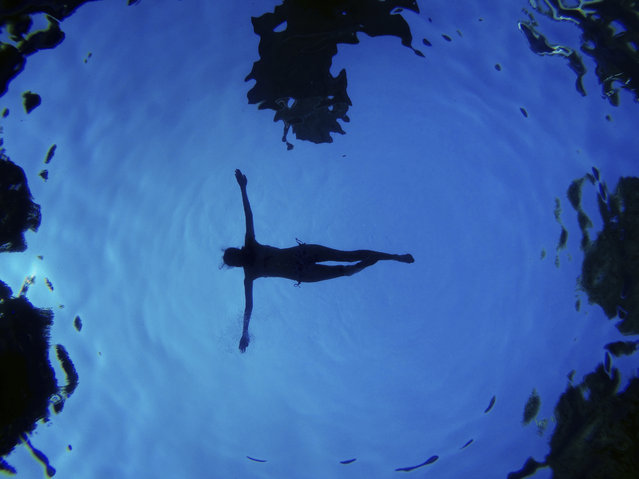 In this underwater picture a woman floats in a swimming pool during a summer day in Madrid, Spain, August 28, 2016. (Photo by Daniel Ochoa de Olza/AP Photo) 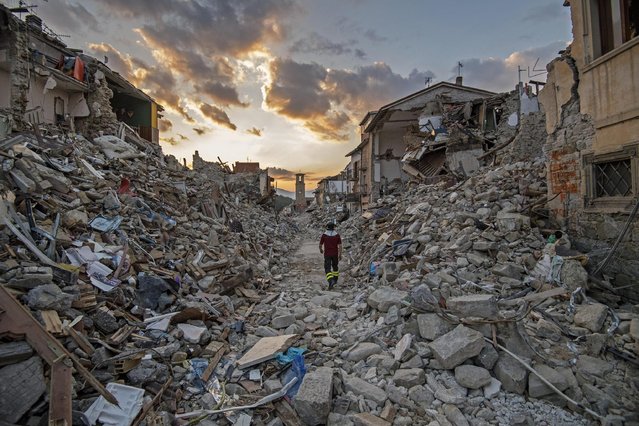 Rescue teams continue their operations in the rubble of the largely destroyed Lazio mountain village of Amatrice, Italy, 01 September 2016. A devastating 6.0 magnitude earthquake early morning of 24 August left a total of 293 dead, according to official sources. (Photo by Alessandro Di Meo/EPA) 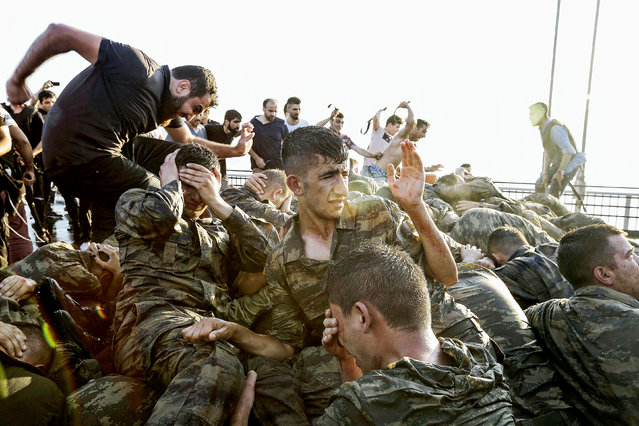 Soliders involved in the coup attempt surrender on Bosphorus bridge on July 16, 2016 in Istanbul, Turkey. Istanbul's bridges across the Bosphorus, the strait separating the European and Asian sides of the city, have been closed to traffic. Turkish President Recep Tayyip Erdogan has denounced an army coup attempt, that has left atleast 90 dead 1154 injured in overnight clashes in Istanbul and Ankara. (Photo by Gokhan Tan/Getty Images) 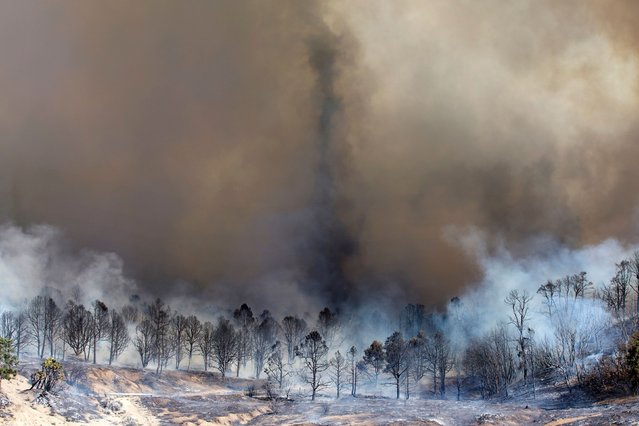 Smoke rises from a burned out grove of trees at the Blue Cut wildfire in Wrightwood, California on August 17, 2016. A rapidly spreading fire raging east of Los Angeles forced the evacuation of more than 82,000 people as the governor of California declared a state of emergency. (Photo by Jonathan Alcorn/AFP Photo) 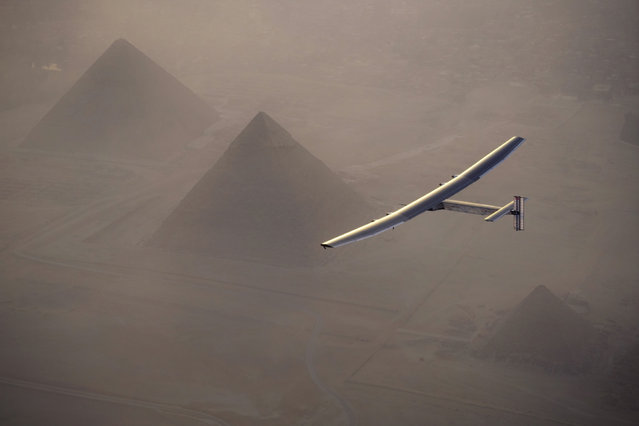 The flash of an exploding stunt grenade is seen while an University of Witwatersrand student jumps on a falling policeman while another policeman discharged his rubber bullet loaded rifle during a running battle with the police forces on campus during a mass demonstration on October 4, 2016 in Johannesburg. South African police fired rubber bullets, stun grenades and teargas at student protesters in Johannesburg as authorities tried to re-open the prestigious Wits University after weeks of demonstrations. The university, along with many campuses across South Africa, has been closed for at least two weeks during protests over tuition fees, with violent clashes regularly erupting between students, police and private security guards. (Photo by Marco Longari/AFP Photo) 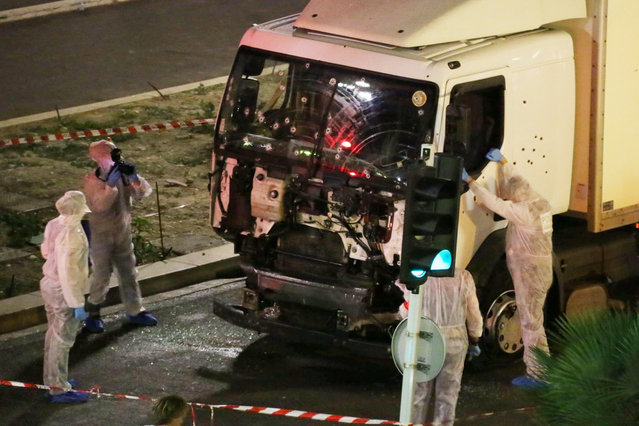 Authorities investigate a truck after it plowed through Bastille Day revelers in the French resort city of Nice, France, Thursday, July 14, 2016. France was ravaged by its third attack in two years when a large white truck mowed through revelers gathered for Bastille Day fireworks in Nice, killing at dozens of people as it bore down on the crowd for more than a mile along the Riviera city's famed seaside promenade. (Photo by Sasha Goldsmith via AP Photo) 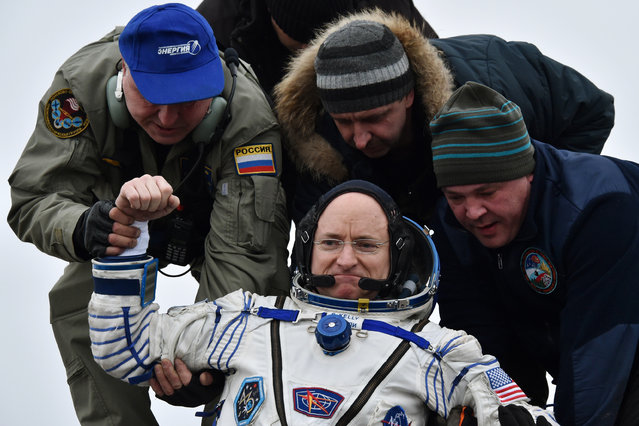 Ground personnel help International Space Station (ISS) crew member Scott Kelly of the U.S. to get off the Soyuz TMA-18M space capsule after landing near the town of Dzhezkazgan, Kazakhstan, Wednesday, March 2, 2016. U.S. astronaut Kelly and Russian cosmonaut Mikhail Kornienko returned to Earth on Wednesday after spending almost a year in space in a ground-breaking experiment foreshadowing a potential manned mission to Mars. (Photo by Krill Kudryavtsev/Pool Photo via AP Photo) 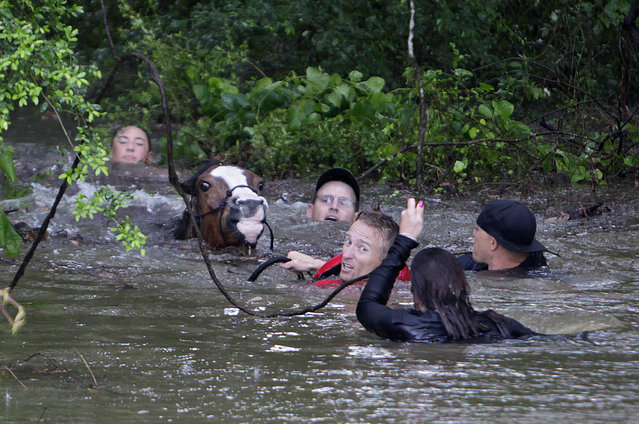 Justin Nelzen, in red vest, joins others as they work to rescue up to 70 horses along Cypresswood Drive near Humble along Cypress Creek, Monday, April 18, 2016, in Houston. More than a foot of rain fell Monday in parts of Houston, submerging scores of subdivisions and several major interstate highways, forcing the closure of schools and knocking out power to thousands of residents who were urged to shelter in place. (Photo by Mark Mulligan/Houston Chronicle via AP Photo) 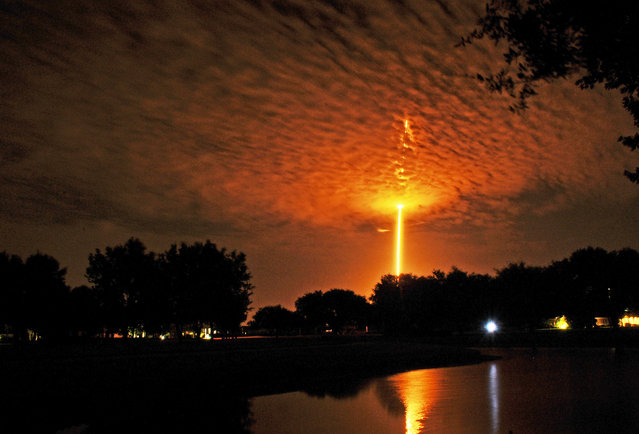 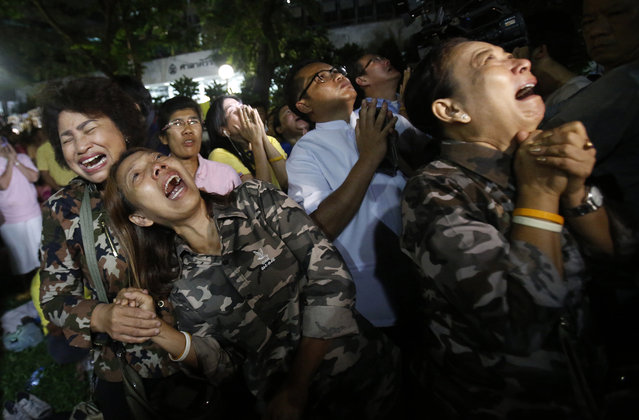 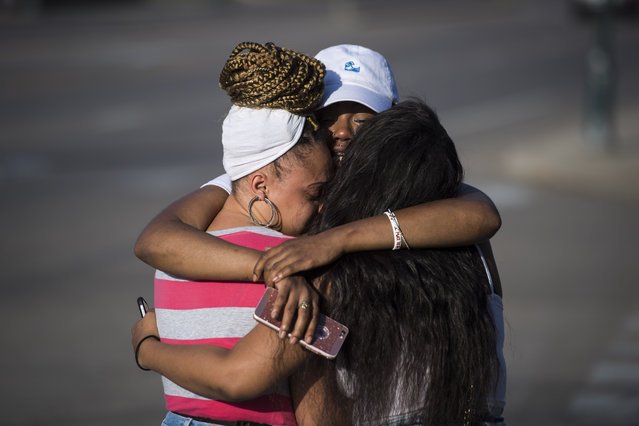 Allysza Castile, the younger sister of Philando Castile, center, is hugged by her best friends near a roadside vigil where Castile was fatally shot in Falcon Heights, Minn. on Saturday July 09, 2016. Philando Castile was shot and killed after a traffic stop by police in Falcon Heights, Wednesday night. A video shot by Diamond Reynolds of the shooting went viral. (Photo by Jabin Botsford/The Washington Post) 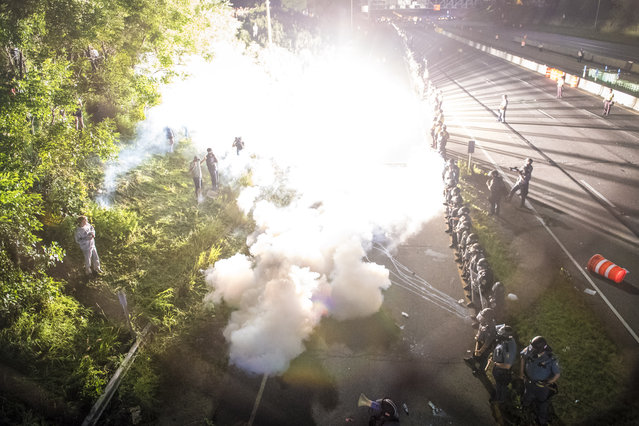 Officers shoot gas, stun grenades, and pepper spray at demonstrators blocking I-94 near the Dale St. exit during a protest for Philando Castile in Falcon Heights, Minn. on Saturday July 09, 2016. Philando Castile was shot and killed after a traffic stop by police in Falcon Heights, Wednesday night. A video shot by Diamond Reynolds of the shooting went viral. (Photo by Jabin Botsford/The Washington Post) 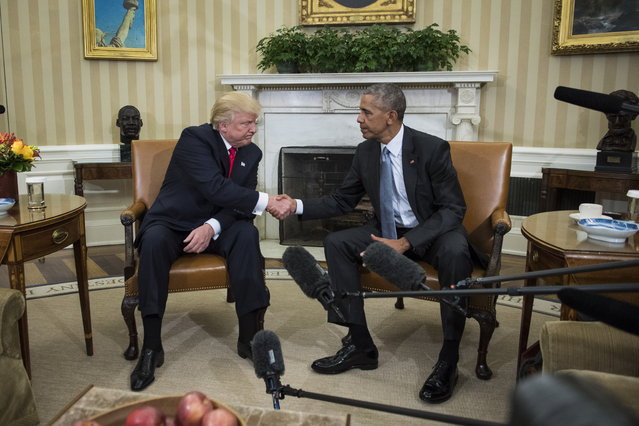 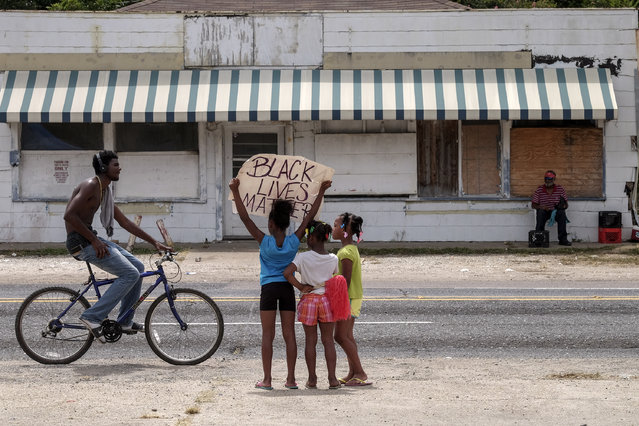 Dakeria Anderson, 9, protests with the help of her sisters D'liyah, 6, and D'anyriah, 8, across the street from the Triple S market where Alton Sterling wash shot and killed in Baton Rouge, LA, on July 11, 2016. The girls father, Dewayne Anderson said that he had been protesting since the beginning and the girls wanted to know what it was all about. The other side of the sign reads: no justice no peace. (Photo by Bonnie Jo Mount/The Washington Post) 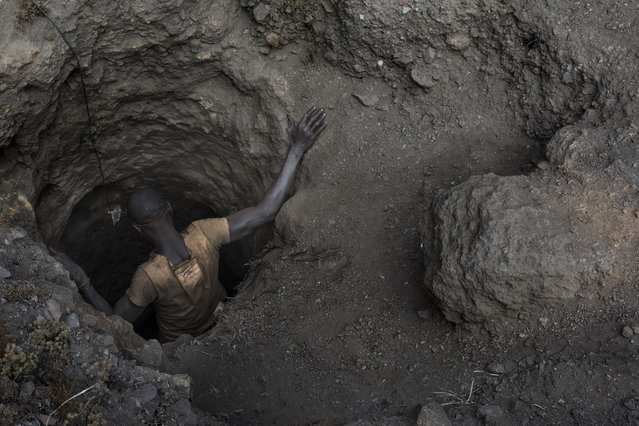 A “creuseur”, or digger, descends into a tunnel at the mine in Kawama, Democratic Republic of Congo on June 8, 2016. The cobalt that is extracted is sold to a Chinese company, CDM, that is a direct supplier to Apple and Samsung. Cobalt is used in the batteries for electric cars and mobile phones. Working conditions are dangerous with no safety equipment or structural support for the tunnels. The diggers are paid on average US$2-3/day. (Photo by Michael Robinson Chavez/The Washington Post) Officers with the Metropolitan Police Department's 6th District work a shooting scene in northeast Washington DC on August 27, 2016. A woman, center, was shot in her right leg at the Kenilworth Parkside apartment complex. Police recruitment numbers are down in the District and departments throughout the country. (Photo by Michael Robinson Chavez/The Washington Post) 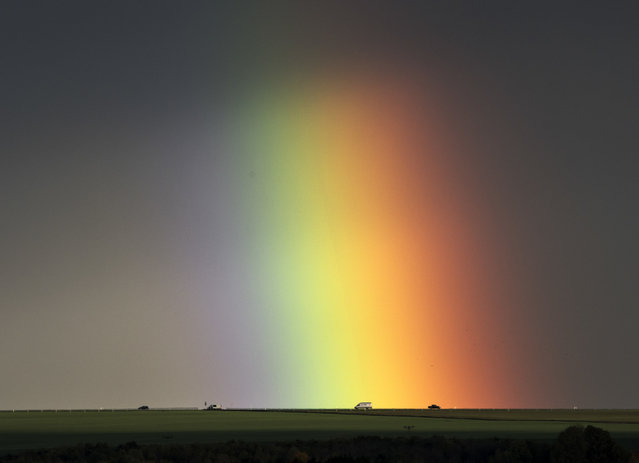 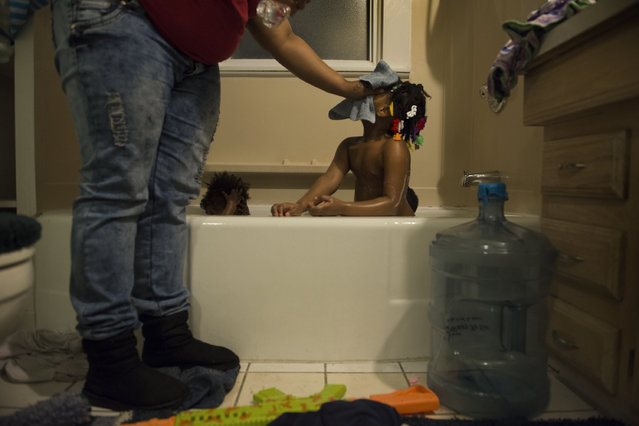 Nakeyja Cade bathes her three children in boiled bottled water after her one-year-old daughter Zariyah Cade (center left) had a blood test scoring high in lead content in Flint, MI on March 1, 2016. The working single mother of three says Zariyah started having seizures months after she was born and believes that the lead in the water is responsible. Her 3-yr-old son was tested and his levels are not as high. She has yet to test her 50year-old daughter and herself. After trying three different water filters, water in the house is testing high for lead. The City of Flint, through a series of maneuvers, went from using drinking water from Detroit to water from the Flint river. The Flint river water has now been shown to contain trihalomethanes, a chlorine byproduct linked to cancer and other diseases. A study by the Hurley Medical Center stated the proportion of infants and children had an extremely above-average levels of lead in their blood which had nearly doubled since the city switched its water source. (Photo by Linda Davidson/The Washington Post) The Smithsonian Institute's National Museum of African American History and Culture, NMAAHC, sits near the Washington Monument on Tuesday, August 9, 2016, in Washington, DC. The Museum will open to the public September 24 of this year, 2016. (Photo by Jahi Chikwendiu/The Washington Post) 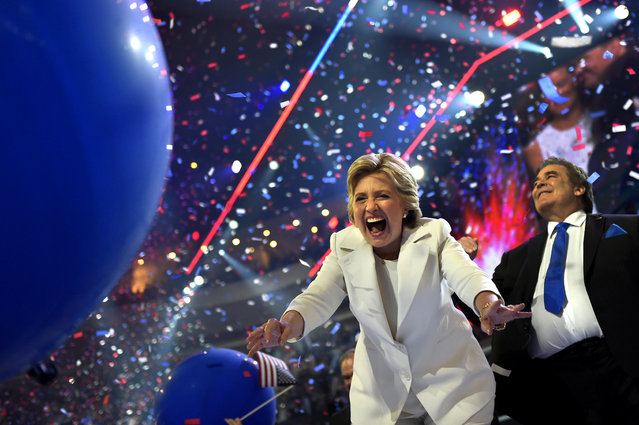 Hillary Clinton celebrates on stage after accepting the Presidential nomination at the Democratic National Convention in Philadelphia on July 28, 2016. (Photo by Michael Robinson Chavez/The Washington Post) 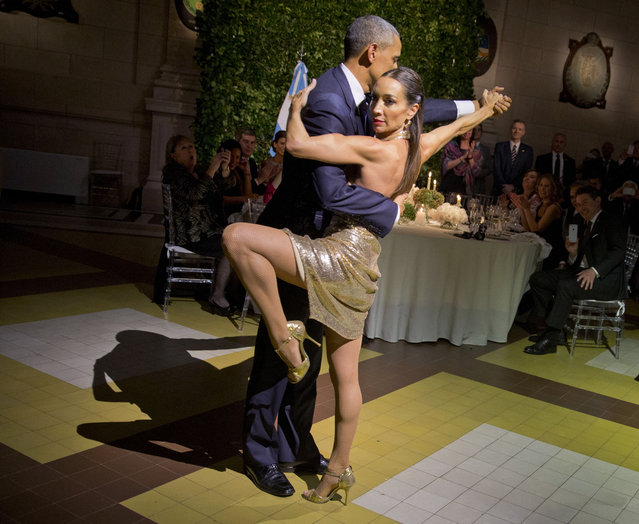 President Barack Obama with does the tango with a dancer during the State Dinner at the Centro Cultural Kirchner, Wednesday, March 23, 2016, in Buenos Aires, Argentina. (Photo by Pablo Martinez Monsivais/AP Photo) 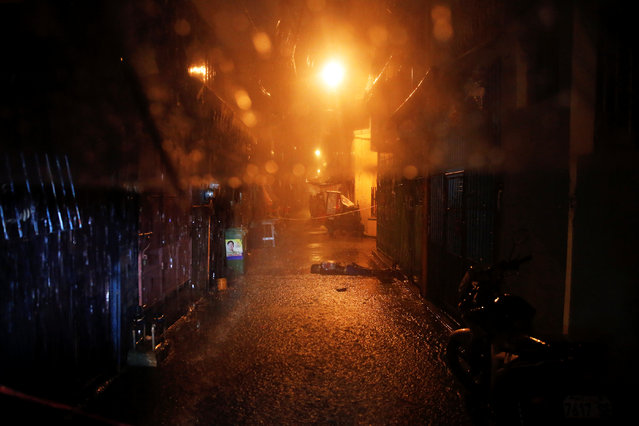 Heavy rain pours as the body of a man killed by unidentified gunmen riding motorcycles is left in a narrow alley in Manila, Philippines early October 11, 2016. (Photo by Damir Sagolj/Reuters) 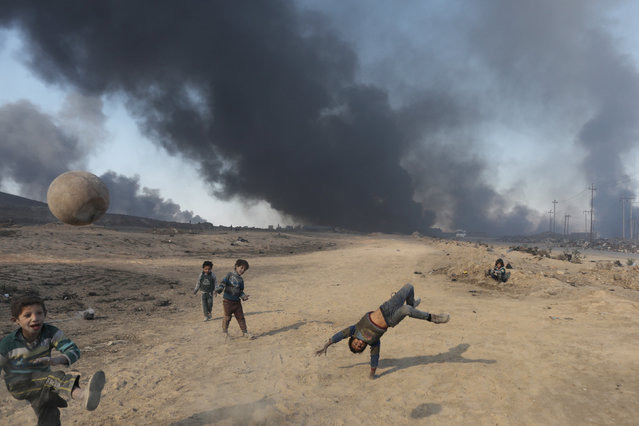