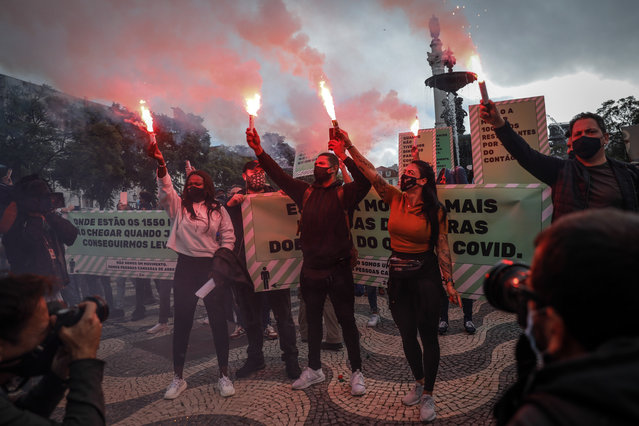 Hospitality workers during a protest demanding support during the coronavirus crisis in Lisbon, Portugal, 14 November 2020. (Photo by Rodrigo Antunes/EPA/EFE) 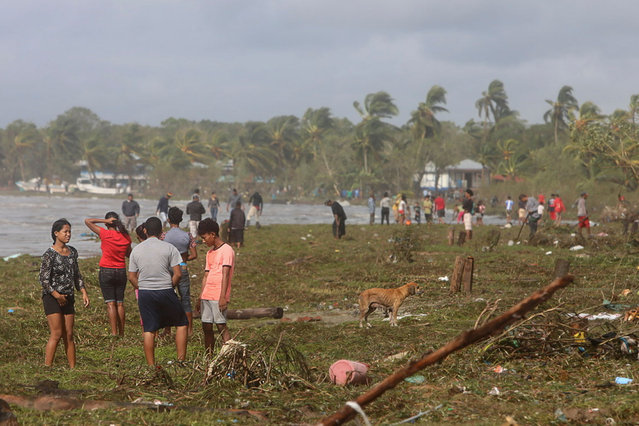 Locals look at damages caused by the passage of Hurricane Eta in Puerto Cabezas, Nicaragua, on November 4, 2020. Hurricane Eta slowed to tropical storm speeds on Wednesday morning even as it pummeled Nicaragua, killing two people there and one in neighboring Honduras, while unleashing fierce winds and heavy downpours. (Photo by Inti Ocon/AFP Photo) 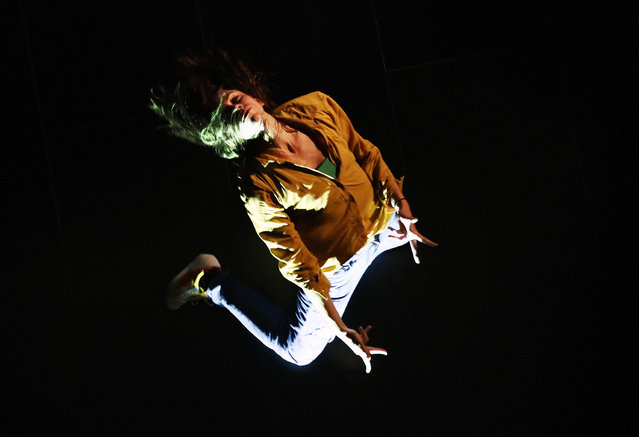 Romanian modern dance artist Smaranda Gabudeanu performs, as seen from above the floor, during a multimedia-dance project entitled “Alienation” inside the building of the Museum of Recent Art (MARe) in Bucharest, Romania, 05 November 2020. The performance “Alienation or the desire for intimacy” is an international project realized through the collaboration between artists from Romania, Sweden and Northern Ireland, within the Durational Performance of Contemporary Dance. The multimedia performance, consisting of scenes inspired by the words alienation, desire and intimacy, was produced by PETEC ( a Romanian contemporary art platform) in partnership with Lava-Dansproduktion, being co-financed by the Administration of the National Cultural Fund of Romania and Konstnarsnamnden (The Swedish Arts Grants Committee). The official premiere will take place online, on Sunday 08 November 2020. (Photo by Robert Ghement/EPA/EFE) 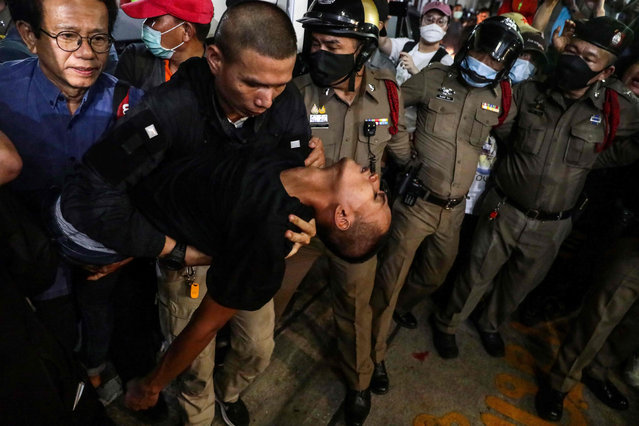 Pro-democracy activist Panupong “Mike” Jadnok (C) is carried into a hospital vehicle after arriving at Prachachuen police station in Bangkok on October 30, 2020, following his release from the Bangkok Remand Prison. (Photo by Jack Taylor/AFP Photo) 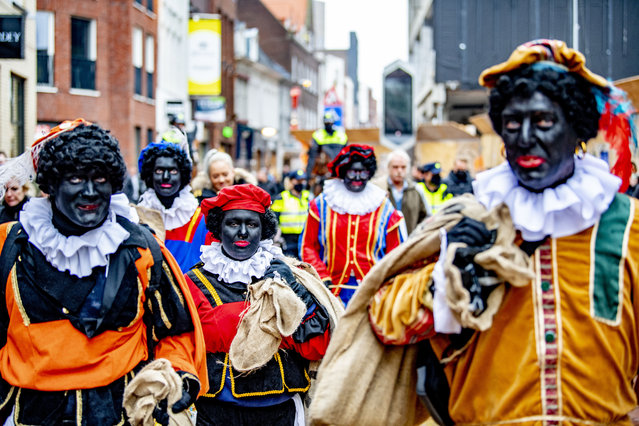 Supporters of the anti-Islam movement Pegida, dressed as the traditional Zwarte Piet, demonstrate for the preservation of Zwarte Piet. Initially, Kick Out Zwarte Piet (KOZP) would also come to Eindhoven, The Netherlands on November 22, 2020. But the action group announced on Saturday that it would cancel the demonstration due to the arrival of Pegida. In Eindhoven, there is a lot of police on Sunday for the demonstration of the extreme right-wing group Pegida, which is demonstrating for the preservation of Zwarte Piet. There are many police vans and there are also officers on horseback. The Pegida activists on the Town Hall Square are often dressed as traditional Zwarte Piet and hand out gingerbread cookies to passers-by. (Photo by Robin Utrecht/Rex Features/Shutterstock) 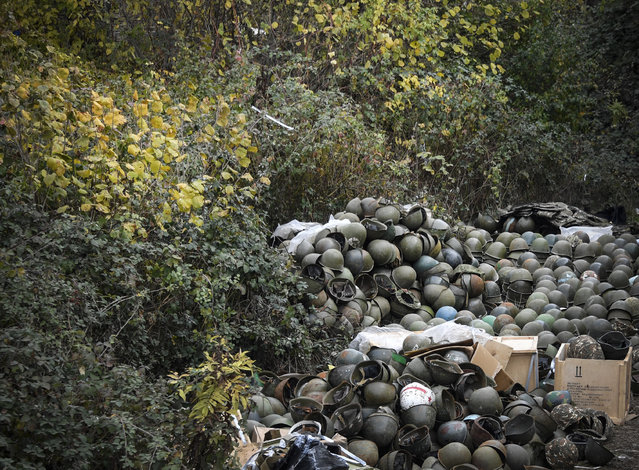 A pile of Armenian army helmets lie on the ground close to an Armenian Army barracks, where soldiers say there is no indoors storage space left, on November 15, 2020, outside of the zone of the the region's administrative centre of Stepanakert, where a Russian peacekeeping contingent deployed this week. Azerbaijan said on November 15, 2020, it had agreed to extend a deadline for Armenia to withdraw from a disputed district as part of a peace accord that ended six weeks of fierce fighting over the Nagorno-Karabakh region. Armenia lost around 2300 dead during the military conflict over this breakaway region. (Photo by Alexander Nemenov/AFP Photo) 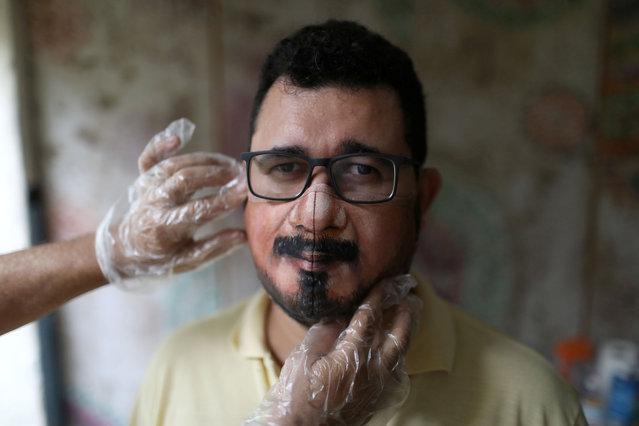 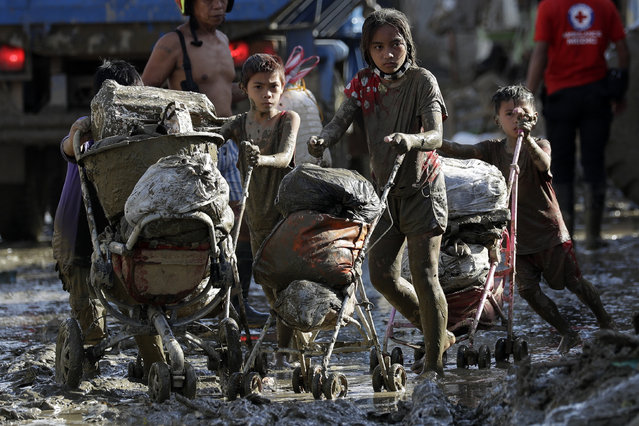 Residents push baby strollers full of belongings they retrieved from their damaged homes at their village damaged by Typhoon Vamco in Rodriguez, Rizal province, Philippines on Tuesday, November 17, 2020. Typhoon Vamco left dozens of people dead as it swelled rivers and flooded low-lying areas while it passed over the capital and storm-battered northeast Philippines. (Photo by Aaron Favila/AP Photo) 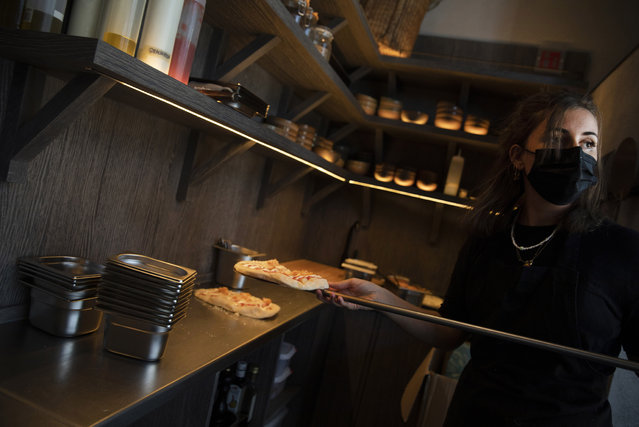 A member of staff prepares to put a pizzette into an oven as she prepares take-away orders at Sergio Herman's Le Pristine restaurant in Antwerp, Belgium, Friday, November 6, 2020. Of all the many challenges the pandemic throws up for all kinds of professions, this one has been particularly tough: How to put a three-star chef into a takeout box. (Photo by Virginia Mayo/AP Photo) 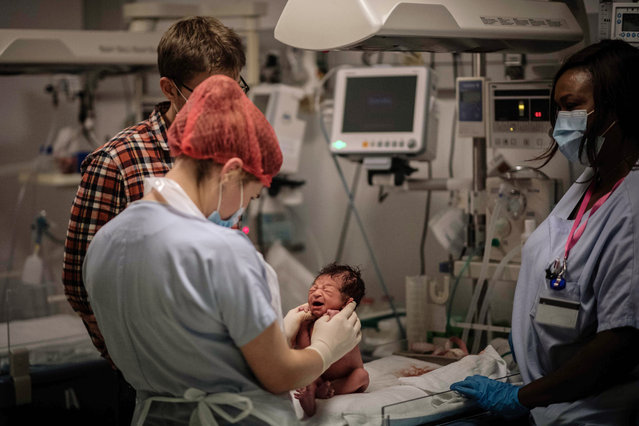 Nurses look after a newborn, during the Covid-19 pandemic, novel coronavirus at the maternity of the Diaconesses hospital in Paris, on November 17, 2020. (Photo by Martin Bureau/AFP Photo) 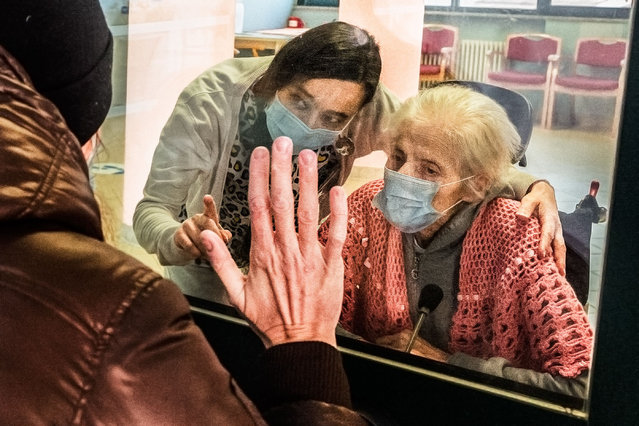 RSA with protective glass that allows guests to meet relatives in the COVID19 emergency Casa Madonna della Fiducia in Calolziocorte in the province of Lecco, Italy on November 28, 2020. (Photo by Carlo Cozzoli/IPA/Rex Features/Shutterstock) 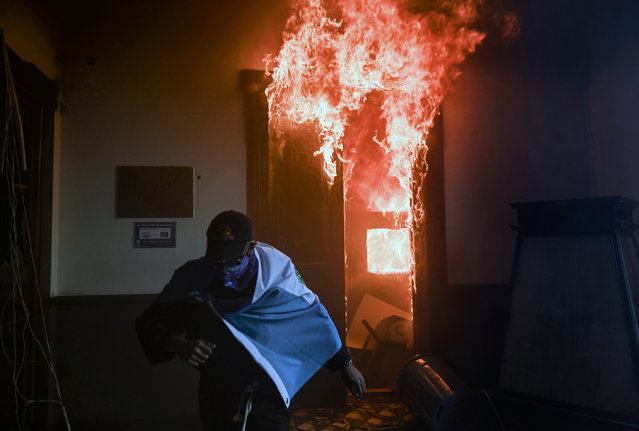 A demonstrator runs after setting on fire an office of the Congress building during a protest demanding the resignation of Guatemalan President Alejandro Giammattei, in Guatemala City on November 21, 2020. The Vice President of Guatemala, Guillermo Castillo, asked President Alejandro Giammattei to resign together for “the good of the country”, after the 2021 budget -the largest in history, which generates indebtedness and rejection among Guatemalans- was approved in Congress. (Photo by Johan Ordóñez/AFP Photo) 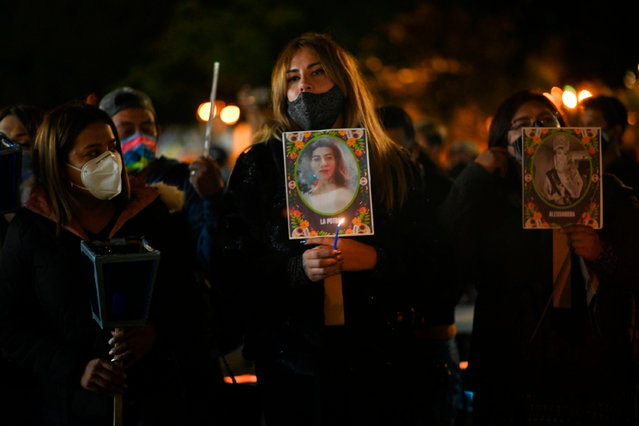 People hold photos during a vigil in memory of women murdered before the International Day of No Violence Against Women at Constitution Square in Guatemala City on November 24, 2020. According to the Guatemalan Women's Group, to date some 444 women have been murdered in 2020. (Photo by Johan Ordonez/AFP Photo) 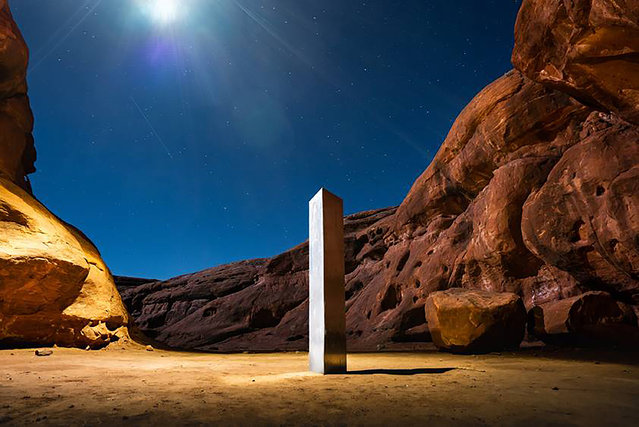 A monolith placed in the Utah wilderness in November 2020. New clues have surfaced in the disappearance of the gleaming monolith that seemed to melt away as mysteriously as it appeared in the red-rock desert. A Colorado photographer told a TV station in Salt Lake City that he saw four men push over the hollow, stainless steel structure last Friday night. (Photo by Terrance Siemon/AP Photo) 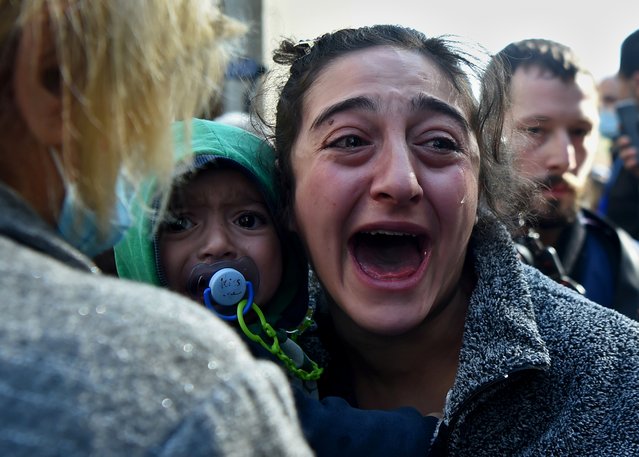 A woman holding a child reacts during an opposition rally to demand the resignation of Armenian Prime Minister Nikol Pashinyan following the signing of a deal to end the military conflict over the Nagorno-Karabakh region, in Yerevan, Armenia on November 11, 2020. (Photo by Lusi Sargsyan/Photolure via Reuters) 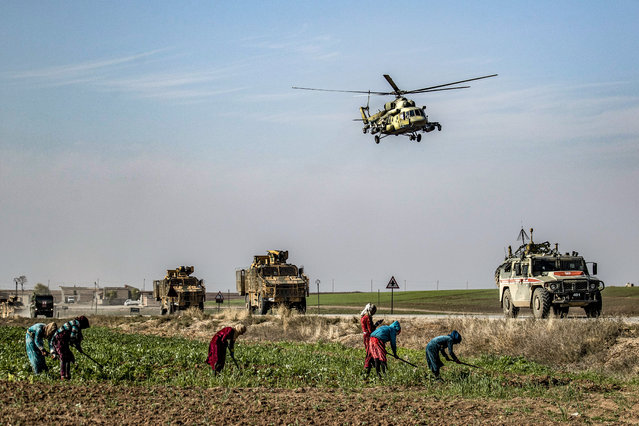 A Russian Mil Mi-17 military helicopter flies over a joint Russian-Turkish military patrol convoy in the countryside near Darbasiyah along the border with Turkey in Syria's northeastern Hasakah province on November 30, 2020. (Photo by Delil Souleiman/AFP Photo) 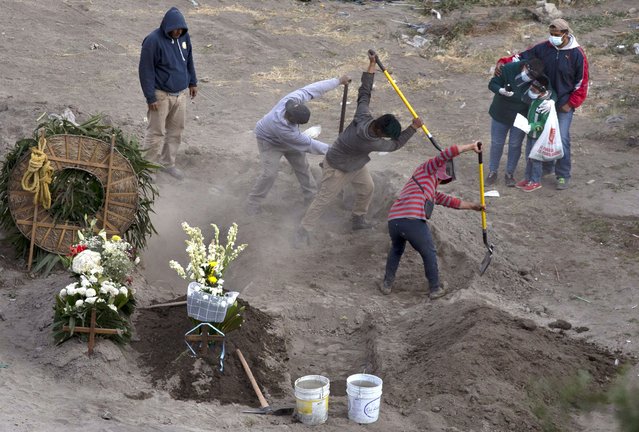 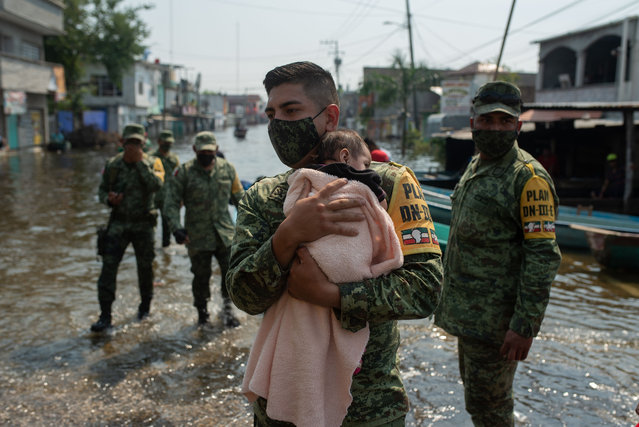 A Mexican soldier carries a baby on a flooded street after heavy rains in Villahermosa, state of Tabasco, Mexico, on November 11, 2020. (Photo by Angel Hernandez/AFP Photo) 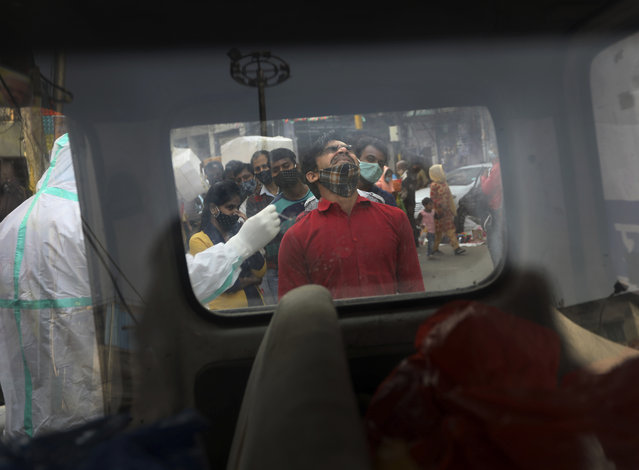 A health worker takes a sample to test for COVID-19 at a marketplace in New Delhi, India, Thursday, November 19, 2020. With Americans, Britons and Canadians now rolling up their sleeves to receive coronavirus vaccines, the route out of the pandemic now seems clear to many in the West, even if the rollout will take many months. But for poorer countries, the road will be far longer and rougher. (Photo by Manish Swarup/AP Photo) 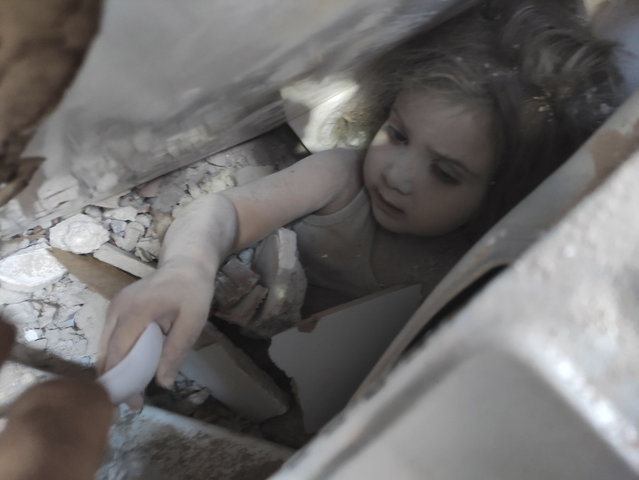 In this photo provided by the Turkish Gendarmerie, Ayda Gezgin is tended to by a member of rescue services in the rubble of her collapsed building, in Izmir, Turkey, Tuesday, November 3, 2020. Rescuers in the Turkish coastal city pulled Gezgin out alive from the rubble, some four days (91 hours) after a strong earthquake hit Turkey and Greece. The girl was taken into an ambulance, wrapped in a thermal blanket, amid the sounds of cheers and applause from rescue workers. (Photo by Turkish Gendarmerie via AP Photo)
Edit Del
17 Feb 2021 09:53:00, post received 0 comments
Publication archive:
←   →
Popular tags:
All tags
Last searches: