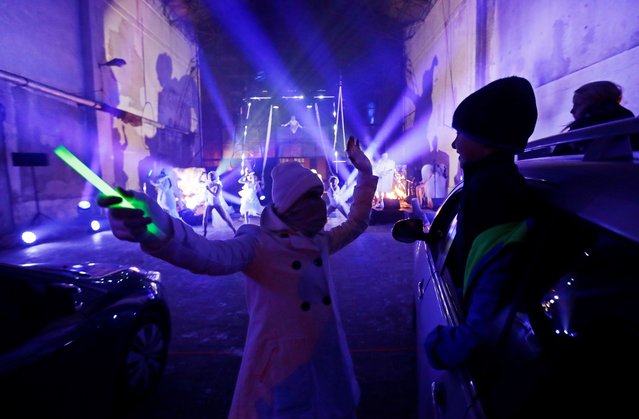 People watch a performance on the eve of Saint Nicholas Day from their cars at a drive-thru theater amid the coronavirus disease (COVID-19) outbreak in Prague, Czech Republic, December 5, 2020. (Photo by David W. Cerny/Reuters) 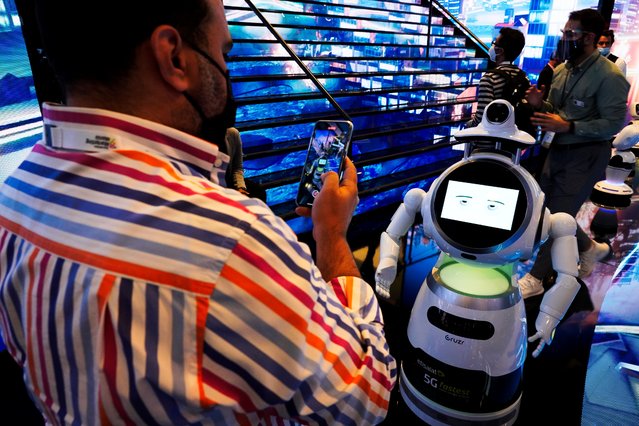 A man takes a video of a robot at the GITEX technology summit in Dubai, United Arab Emirates, Monday, December 7, 2020. As the coronavirus pandemic still causes smaller crowds than normal at Dubai events, this year's annual GITEX summit got a boost from Israelis who traveled to the UAE for the event after the recent normalization deal between the two countries. (Photo by Jon Gambrell/AP Photo) 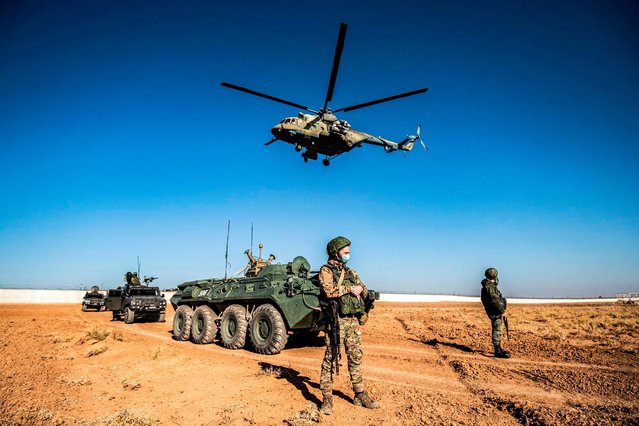 A Russian Mil Mi-17 military helicopter flies by soldiers and military vehicles during a joint Russian-Turkish patrol in the eastern countryside of the town of Darbasiyah near the border with Turkey in Syria's northeastern Hasakah province on December 7, 2020. (Photo by Delil Souleiman/AFP Photo) 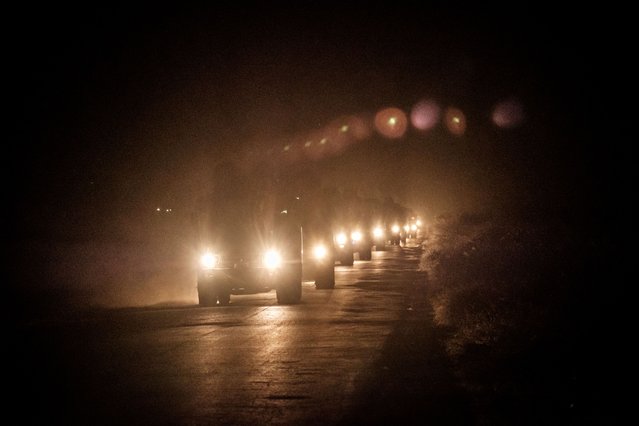 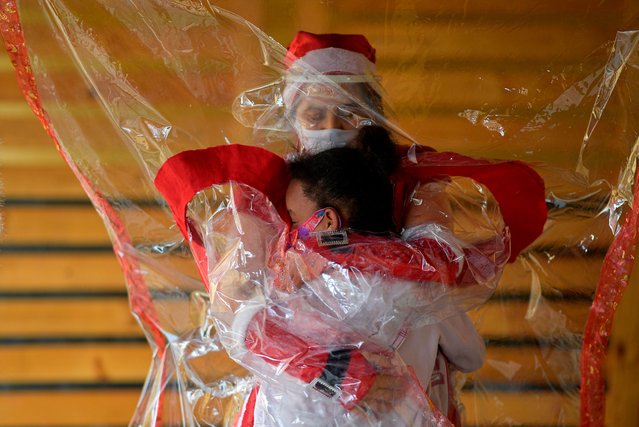 Volunteer Fatima Sanson, dressed up as Mrs. Claus, embraces a needy child in Belo Horizonte, Minas Gerais state, Brazil on December 7, 2020. Fatima Sanson delivers gifts and hugs to needy children every Christmas, but due to the coronavirus pandemic, this year she built an embrace curtain to allow children to touch her, keeping everyone safe. (Photo by Douglas Magno/AFP Photo) 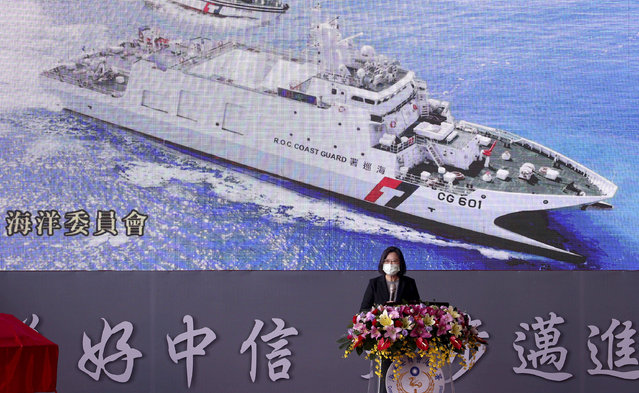 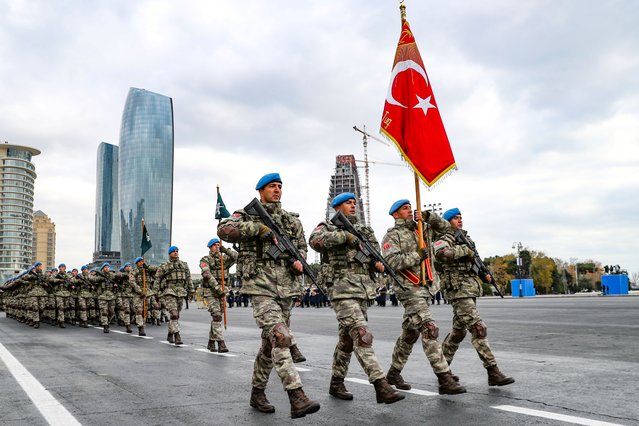 Members of a Turkish forces commando brigade take part in a military parade in which Turkey's President Recep Tayyip Erdogan and Azerbaijan's President Ilham Aliyev, looked on in Baku, Azerbaijan, Thursday, December 10, 2020. The massive parade was held in celebration of the peace deal with Armenia over Nagorno-Karabakh that saw Azerbaijan reclaim much of the separatist region along with surrounding areas. (Photo by AP Photo/Stringer) 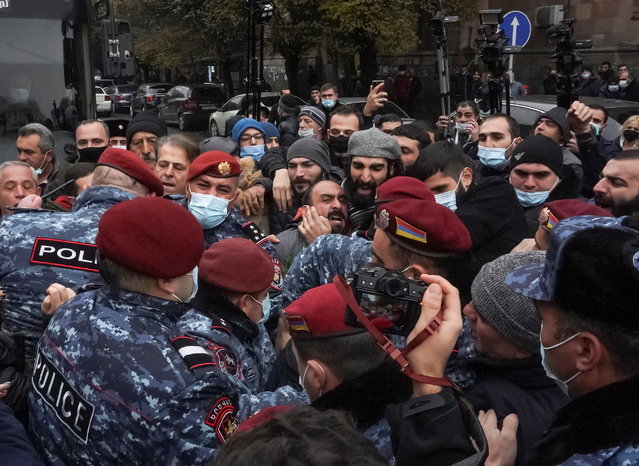 Armenian law enforcement officers scuffle with opposition protesters during a rally to demand the resignation of Prime Minister Nikol Pashinyan, following the signing of a deal to end a military conflict over Nagorno-Karabakh, in Yerevan, Armenia on December 10, 2020. (Photo by Artem Mikryukov/Reuters) 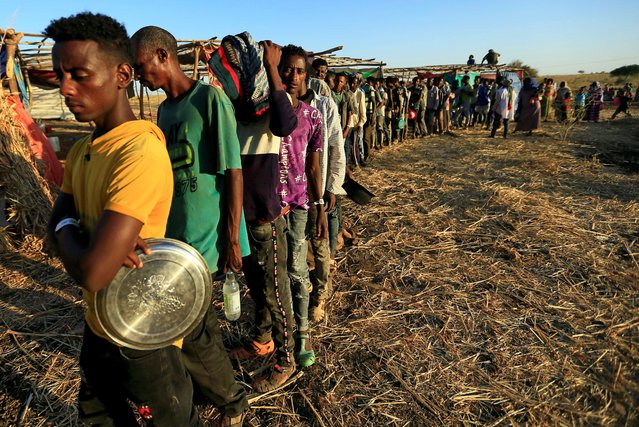 Ethiopian refugees who fled Tigray region, queue to receive food aid within the Um-Rakoba camp in Al-Qadarif state, on the border, in Sudan on December 11, 2020. (Photo by Mohamed Nureldin Abdallah/Reuters) 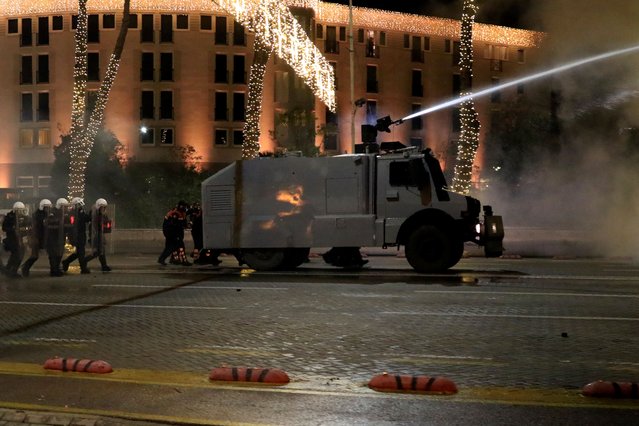 A police water cannon operates against protesters during clashes in Tirana, Friday, December 11, 2020. Albanian demonstrators clashed in the third day on Friday protesting for the death of a 25-year-old man shot dead by a police officer. (Photo by Hektor Pustina/AP Photo) 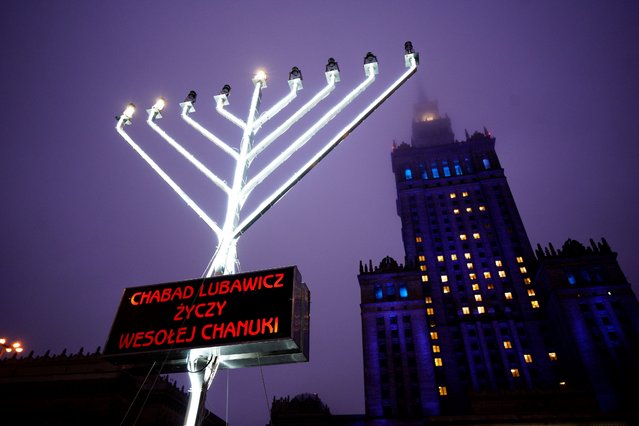 A large menorah is seen in front of the Palace of Culture and Sciences in Warsaw, Poland on December 11, 2020. From December 10 until 18 the Jewish festival of Hannukah will be celebrated. Jewish people used to make up nearly 30 percent of the city's populatin before the Second World War. (Photo by Jaap Arriens/NurPhoto via Getty Images) 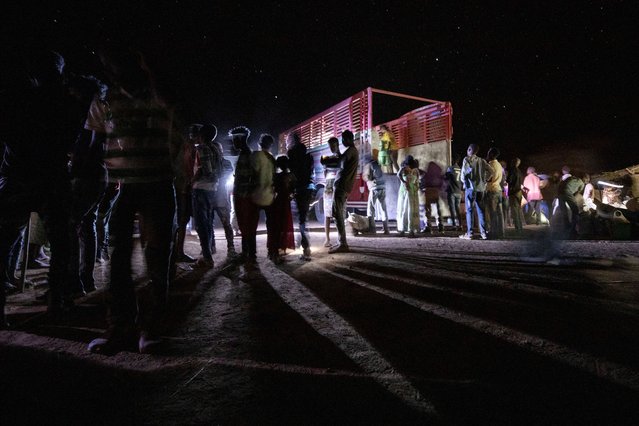 People who fled the conflict in the Tigray region of Ethiopia gather their belongings after their arrival from Village 8, the transit center near the Lugdi border crossing, at Umm Rakouba refugee camp in Qadarif, eastern Sudan, Sunday December 13, 2020. Convoys carrying over 500 Tigrinyan refugees arrived in Umm Rakouba, the only official refugee camp on Sunday. (Photo by Nariman El-Mofty/AP Photo) 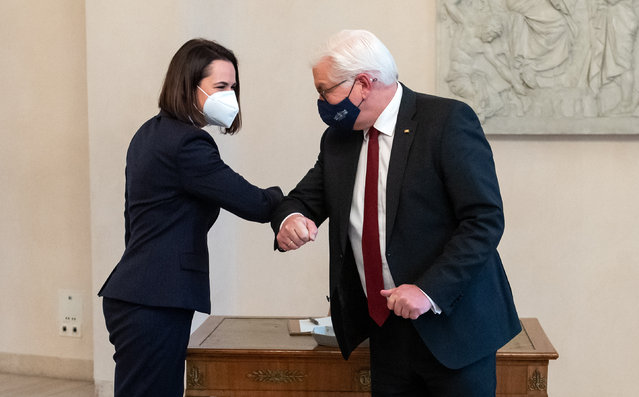 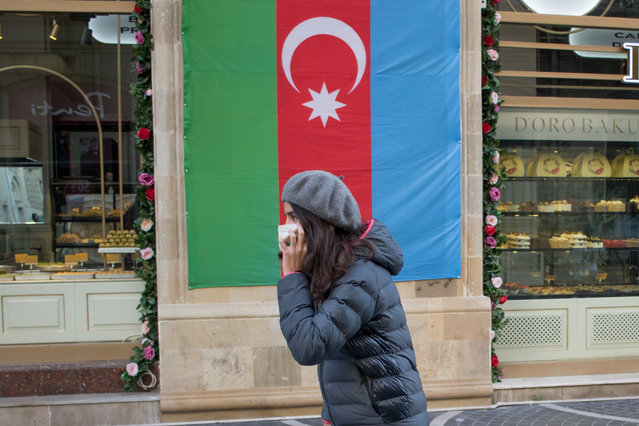 Citizens walk in front of the Azerbaijan flag on December 14, 2020 in Baku, Azerbaijan. The country's cafes and restaurants are closed through Jan 18th, and all stores besides grocers and pharmacies will be limited to delivery. Travel is restricted between cities, and an SMS-based permission system was reimposed, whereby people need to request permission to run essential errands. Azerbaijan hopes the measures will curb a spike in covid-19 cases that started in October. (Photo by Aziz Karimov/Getty Images) 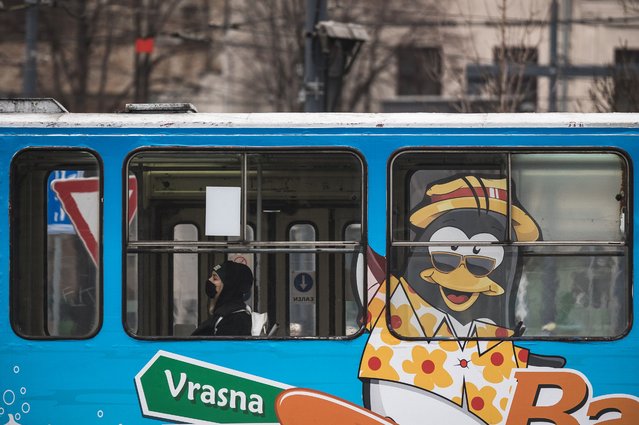 A commuter wears a protective face mask during a tram ride during the COVID-19 pandemic in Belgrade, on December 14, 2020. Serbia is witnessing a rise in coronavirus infections prompting the government to consider new restrictions. (Photo by Andrej Isakovic/AFP Photo) 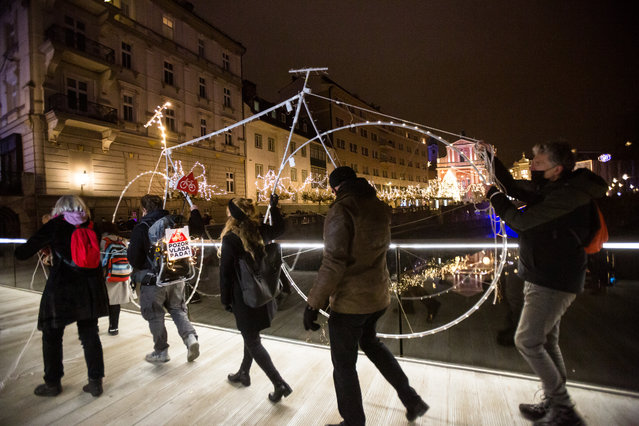 Protesters carry a figure of a large bicycle decorated with lights as a symbol of anti-government protest to a bridge over Ljubljanica river in Ljubljana, Slovenia on December 18, 2020. Amid growing instability in the government of Janez Jansa, the anti-government protests in Ljubljana continued. On Friday, protesters strung up a lighted bicycle, a symbol of protests, over the Ljubljanica River in the city center and strolled through the streets carrying banners. In order to respect the covid-19 epidemic restrictions that are subject to very big fines the protest was small, but creative. (Photo by Luka Dakskobler/SOPA Images/LightRocket via Getty Images) 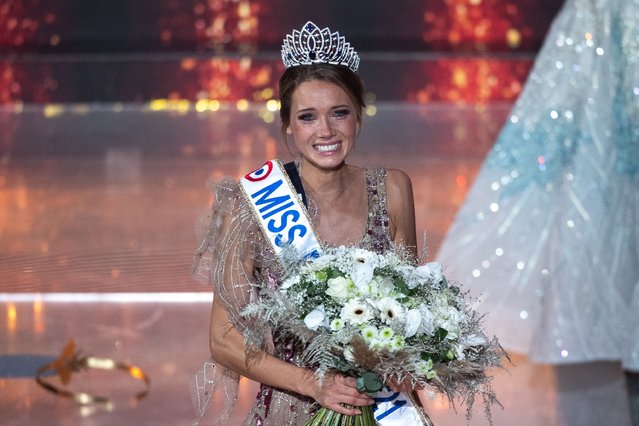 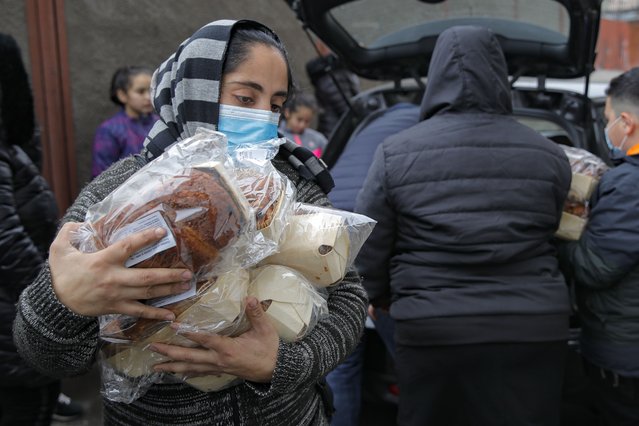 A woman carries traditional Christmas sweets in Bucharest, Romania, Thursday, December 24, 2020. Several poor families received food from donors on Christmas eve in one of the poorest areas of the Romanian capital. (Photo by Vadim Ghirda/AP Photo) 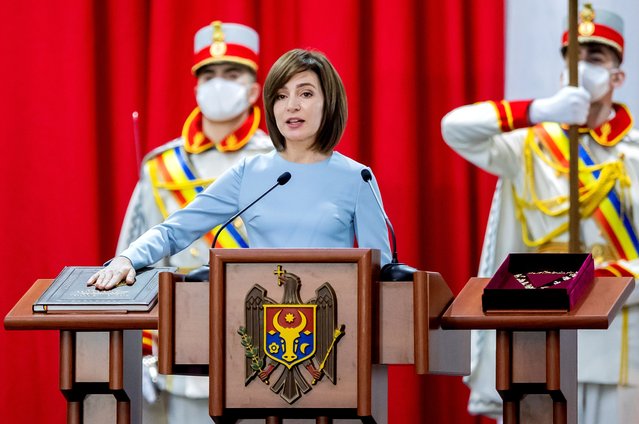 Moldova's President-elect Maia Sandu takes the oath of office during her inauguration ceremony in Chisinau on December 24, 2020. (Photo by Reuters/Stringer) 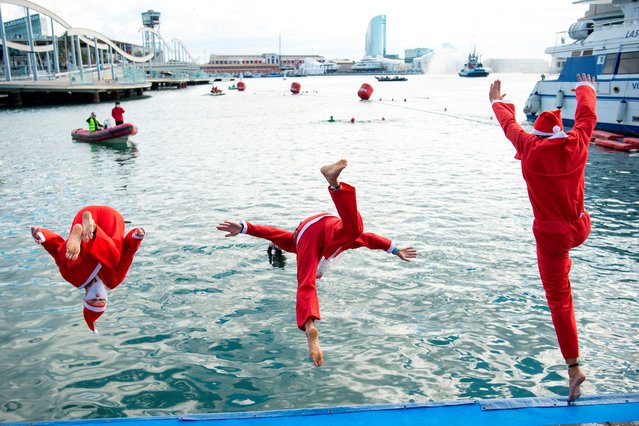 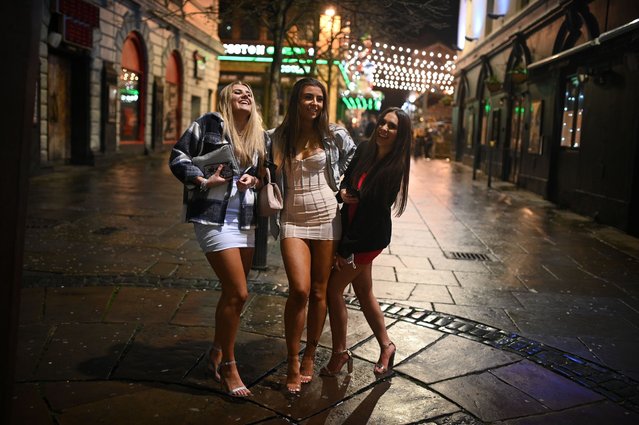 Revellers enjoy a night out in central Liverpool, northwest England, on December 30, 2020 before hightened Tier 3 restrictions closing hospitality venues, and bars indoor and outdoor socialising between households are imposed in the city amid surging cases of the novel coronavirus. Tighter coronavirus restrictions will be extended across England from on December 30 the British government announced, with a new Covid-19 variant blamed for a rapid surge in cases. Liverpool enters Tier 3, which closes hospitality venues, and bars indoor and outdoor socialising between households with the highest Tier 4 rules, which require all non-essential shops, hairdressers as well as leisure and entertainment venues to close, will now apply to more than 44 million people. (Photo by Oli Scarff/AFP Photo)
Edit Del
01 Mar 2021 08:47:00, post received 0 comments
Publication archive:
←   →
Popular tags:
All tags
Last searches: