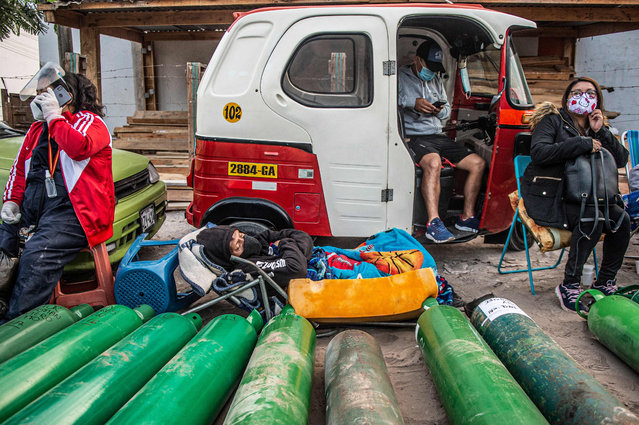 People camp as they wait to refill empty oxygen cylinders in Villa El Salvador, on the southern outskirts of Lima, on February 25, 2021, amid the COVID-19 coronavirus pandemic. Relatives of COVID-19 patients are desperate for oxygen to keep their loved ones alive during a fierce second wave of the pandemic in Peru. (Photo by Ernesto Benavides/AFP Photo) 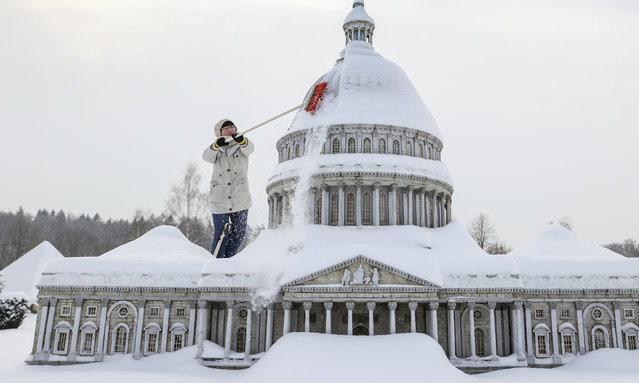 A staff member clears snow from the Washington D.C. Capitol in Miniworld, Lichtenstein, Germany on February 9, 2021. There are over 100 world-famous monuments on a scale of 1:25 in the amusement park. Almost 2 million people have already visited the mini world. (Photo by Jan Woitas/dpa-Zentralbild/dpa) 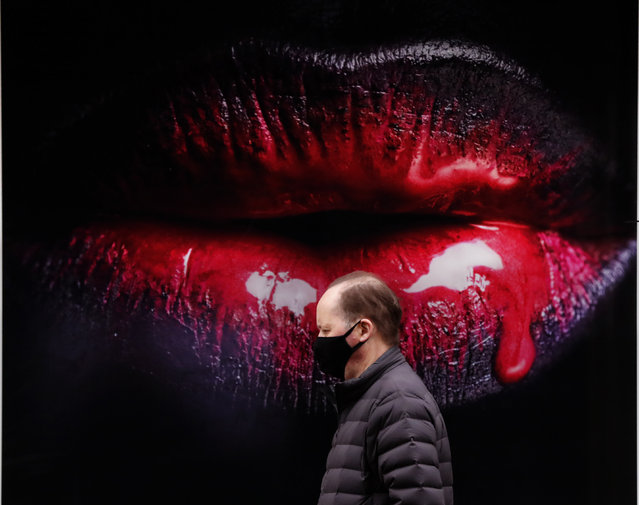 A man wearing a face covering due to the COVID-19 pandemic walks past a poster in a shop in London, Wednesday, February 17, 2021. (Photo by Frank Augstein/AP Photo) 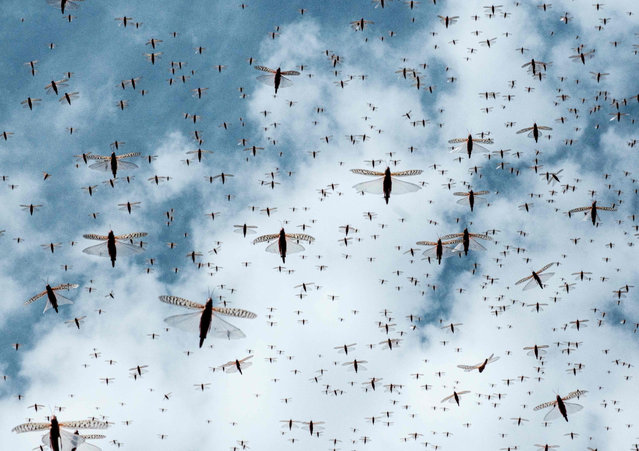 A picuture taken on February 9, 2021, shows a swarm of desert locust fly after an aircraft sprayed pesticide in Meru, Kenya. New swarms of desert locusts are threatening the livelihoods of millions of people in the Horn of Africa and Yemen despite a year of control efforts, the United Nations has warned. (Photo by Yasuyoshi Chiba/AFP Photo) 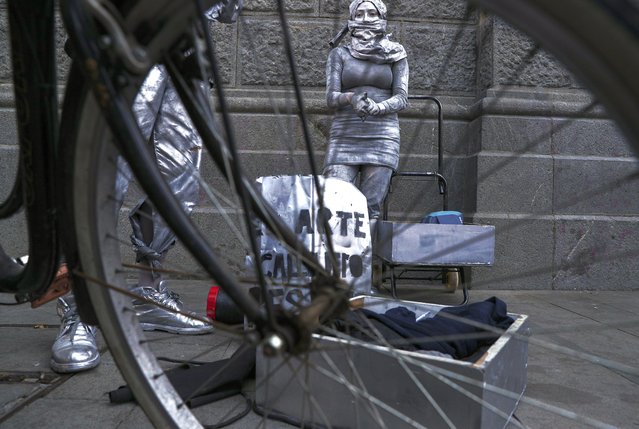 Street performers prepare for a presentation in remembrance of street juggler Francisco Martinez at Plaza de Armas in downtown Santiago, Chile, Monday, February 8, 2021. Martinez was fatally shot on Feb. 6 by a police officer in the southern tourist town of Panguipulli, setting off protests over alleged police violence in Chile. (Photo by Esteban Felix/AP Photo) 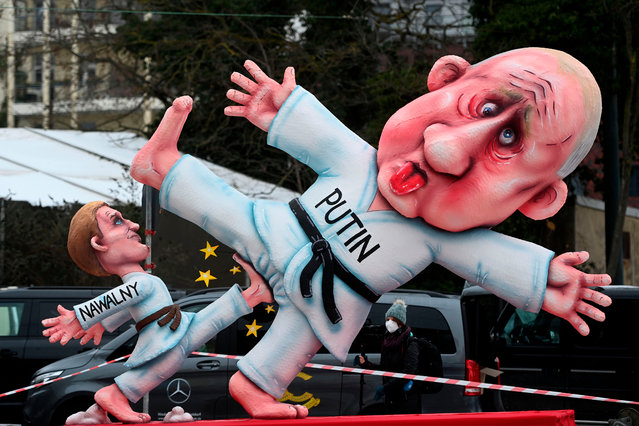 A carnival float depicting Russian opposition leader Alexei Navalny (L) dressed as a judoka kicking the balls of Russian President Vladimir Putin is seen during a slimmed down version of the traditional Rose Monday parade on February 15, 2021 in Duesseldorf, western Germany. Due to the novel coronavirus COVID-19 pandemic, traditional parades and festivities in Germany's carnival hotspots, mainly situated in the Rhineland region, had to be canceled or modified to conform to the rules and restrictions in order to limit the spread of the virus. (Photo by Ina Fassbender/AFP Photo) 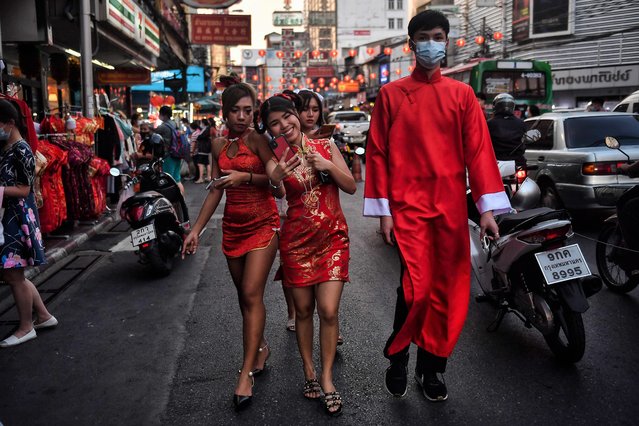 People wear traditional Chinese outfits as they walk in Chinatown in Bangkok on February 11, 2021, ahead of the start of the Lunar New Year, which ushers in the Year of the Ox on February 12. (Photo by Lillian Suwanrumpha/AFP Photo) 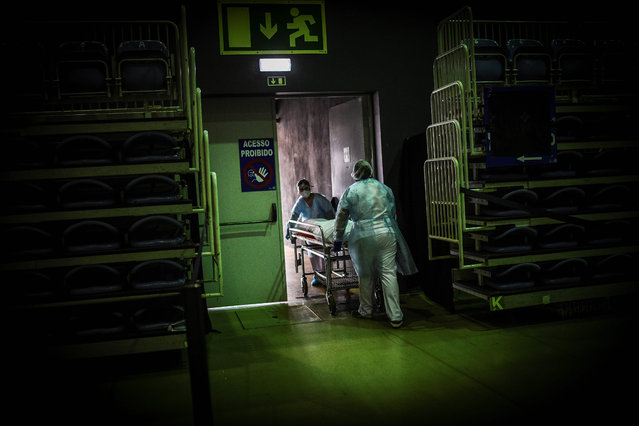 Health workers carry the body of a Covid-19 victim on a stretcher at the Portimao Arena sports pavilion converted in a field hospital for Covid-19 patients at Portimao, in the Algarve region, on February 9, 2021. (Photo by Patricia de Melo Moreira/AFP Photo) 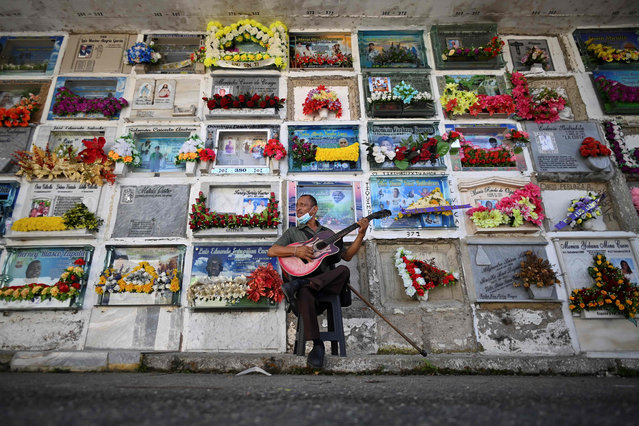 Javier Giraldo, 57, a musican who has played his guitar for 30 years in burials, is seen at the cemetery in Buenaventura, Colombia, on February 10, 2021. Since December, 2020, Buenaventura has been suffering a blood and fire dispute between members of the La Local armed group, which split into two substructures known as Shotas and Espartanos, that are now facing each other to death for the control of drug trafficking. (Photo by Luis Robayo/AFP Photo) 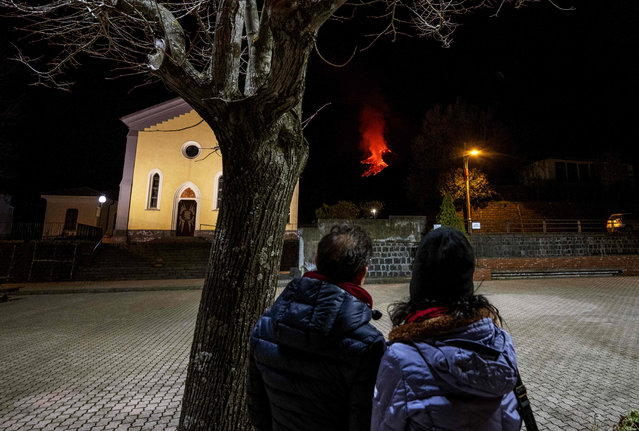 This photo taken late on February 24, 2021 in Zafferana Etnea, Sicily, shows watching lava flowing along the sides of the southern crater of the Etna volcano as a new eruptive episode of tall lava fountains, known as paroxysm, occurs. (Photo by Giovanni Isolino/AFP Photo) 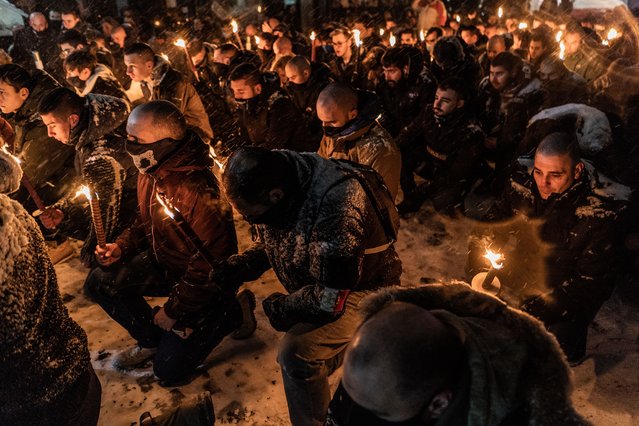 Ultra-Nationalists carry torches and knee on their knees in memory of General Hristo Lukov near the house he once lived as snow falls on February 13, 2021 in Sofia, Bulgaria. The Lukov March is an event held annually in Sofia since 2003, with the exception of 2020 when it was successfully banned, in honour of a pro-Nazi general and draws neo-Nazis from across Europe. The Lukov March is the subject of an online petition entitled “u201cStop fascist manifestations in the Bulgarian public space”u201d. (Photo by Hristo Rusev/Getty Images) 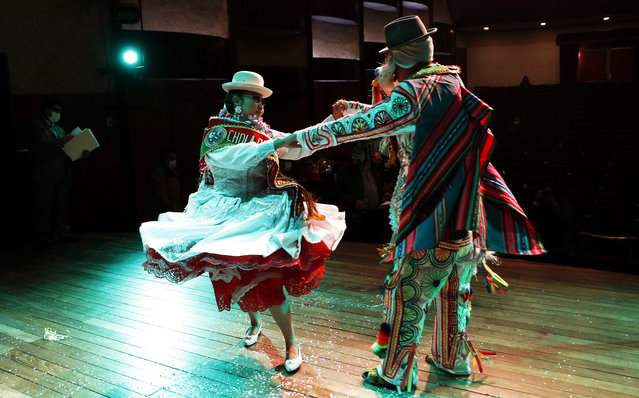 Contestants dance during the election of the three main beloved Carnival characters: Chuta, Pepino and Chola, all of whom represent gaiety in La Paz, Bolivia, Monday, February 8, 2021. The winning trio of Carnival must be adept at spreading happiness and never tire of dancing, however due to the COVID-19 pandemic, their performances will be broadcast online. (Photo by Juan Karita/AP Photo) 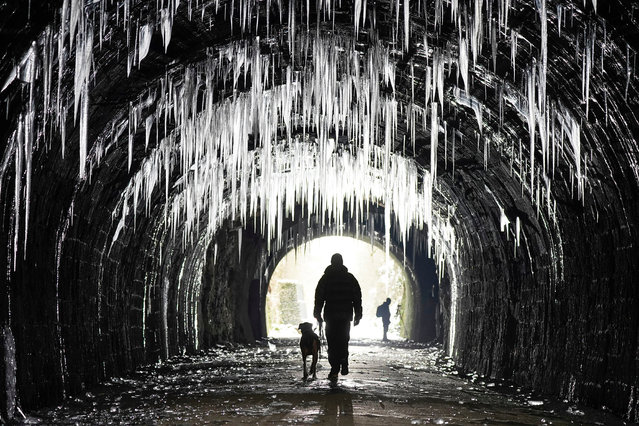 Icicles hang from the roof of the Hopton Tunnel on the High Peak Trail in Derbyshire on February 12, 2021 in Matlock, England. Hopton Tunnel is former railway tunnel near the village of Hopton, Derbyshire. The rail line was closed in 1967 and is now part of the High Peak walking and cycling trail. Many areas of the uk has seen freezing temperatures and high winds in the South West coastal regions as the cold snap continues. (Photo by Christopher Furlong/Getty Images) 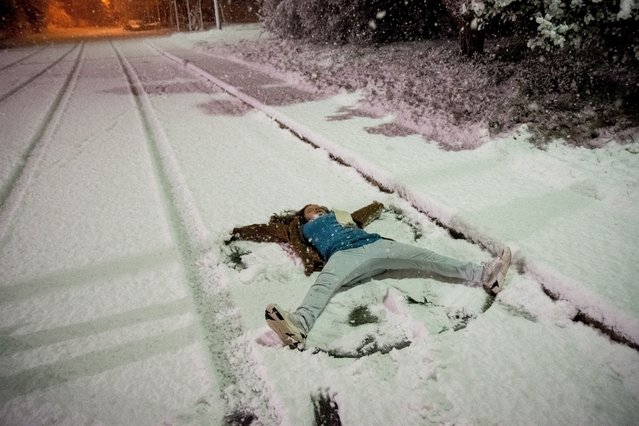 People are playing with the snow in Athens, Greece, on February 15, 2021. The snowfall called “Medea” showed up in the area of Zografou in Athens, Greece. (Photo by Nikolas Kokovlis/NurPhoto via Getty Images) 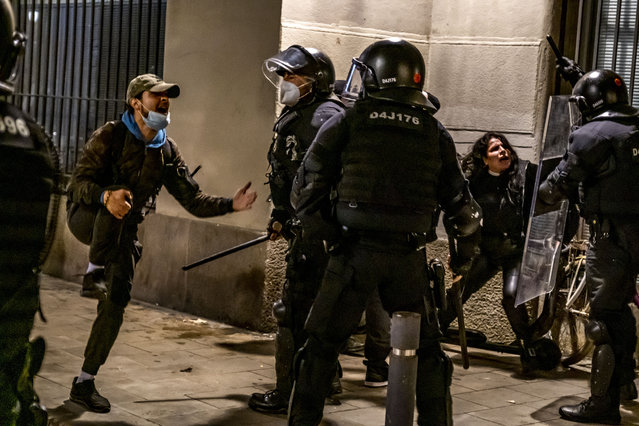 Agents of the mossos d'esquadra arresting protesters, during the demonstration in Barcelona, Spain on February 21, 2021. Sixth night of protests and riots in response to the arrest and imprisonment of rapper Pablo Hasel accused of exalting terrorism and insulting the crown in the content of the lyrics of his songs. (Photo by Paco Freire/SOPA Images/Rex Features/Shutterstock) 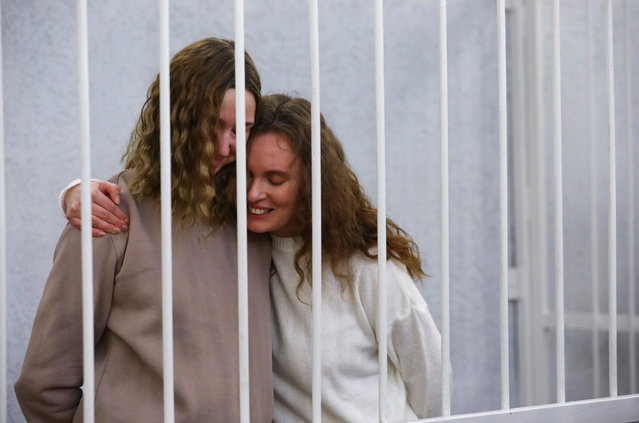 Belsat journalists Katerina Bakhvalova (R) (Andreeva) and Daria Chultsova (L), embrace each other in a cage before the start of a trial in Minsk, Belarus, 09 February 2021. Both journalists were detained in November 2020, when they were reporting on anti-government protests. They face up to three years in prison on charges of organizing and preparing actions that grossly violate public order. (Photo by Reuters/Stringer) A child waits for the welcome party at the Ruapekapeka Pa commemorations on February 03, 2021 in Waitangi, New Zealand. (Photo by Fiona Goodall/Getty Images) 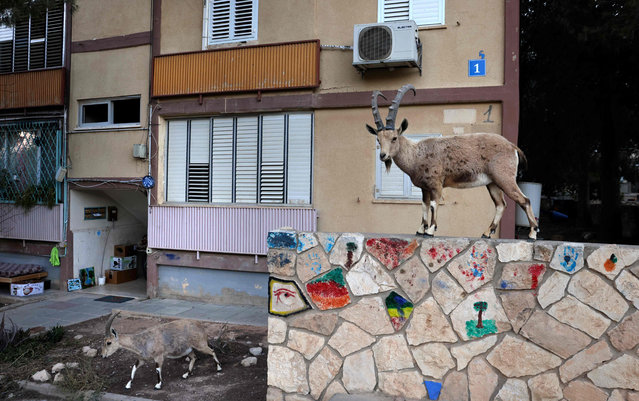 Nubian ibexes walk in a street during a national lockdown due to the Covid-19 pandemic crisis in the southern Israeli city of Mitzpe Ramon in the Negev desert on February 4, 2021. (Photo by Menahem Kahana/AFP Photo) 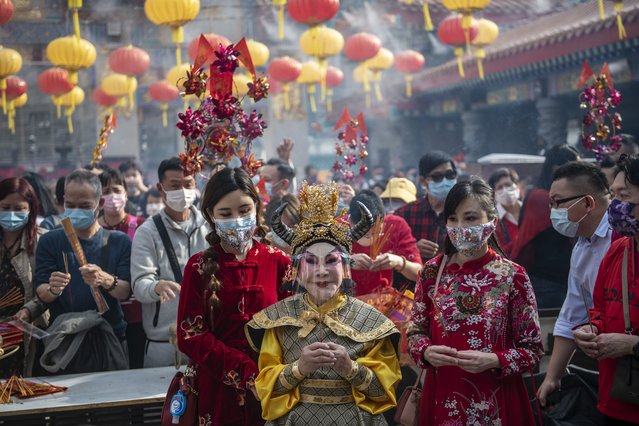 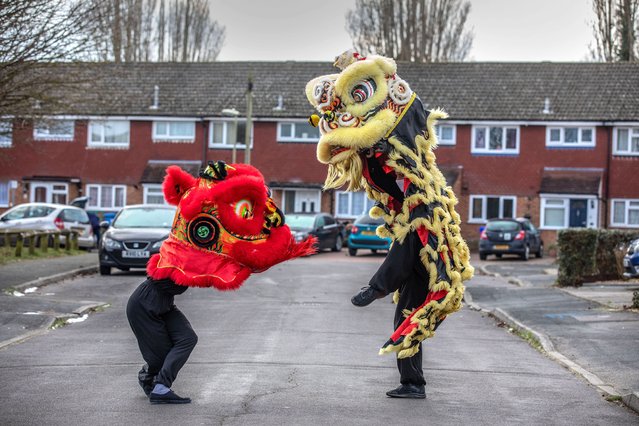