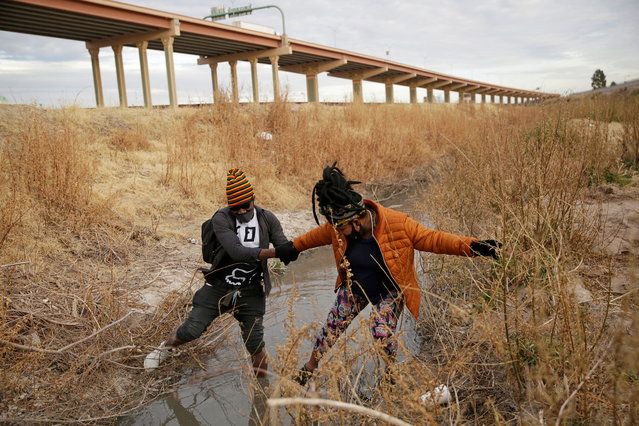 Migrants cross the Rio Bravo river to turn themselves in to request for asylum in El Paso, Texas, U.S., as seen from Ciudad Juarez, Mexico on February 1, 2021. (Photo by Jose Luis Gonzalez/Reuters) 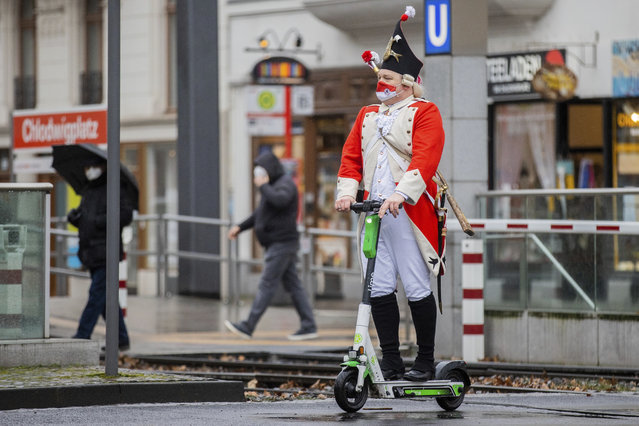 A carnival reveller rides an electric scooter near the Severinstor gate in Cologne, Germany, Monday, February 15, 2021. Because of the coronavirus pandemic the traditional carnival parade in the city are canceled. (Photo by Rolf Vennenbernd/dpa via AP Photo) 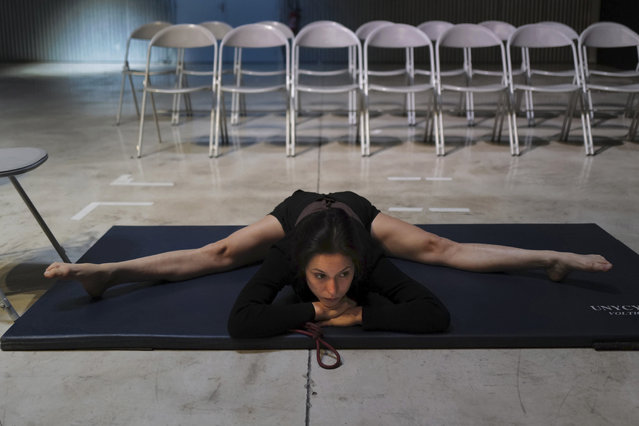 Performer Alice Rende from Brazil stretches prior to performing “Passages”, a contortionism creation in a space delimited by a Plexiglas box during the BIAC, International Circus Arts Biennale, in Marseille, south of France, Thursday, February 4, 2021. (Photo by Francois Mori/AP Photo) 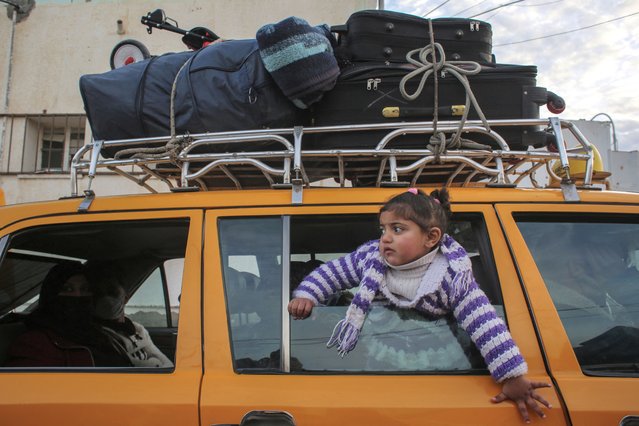 A girl looks on through the window of a vehicle whose top is loaded with suitcases, while waiting at the Rafah border crossing's departure area to travel from the Gaza Strip into Egypt, on February 9, 2021, which reopened after an Egyptian announcement to let through incoming traffic until further notice. Egypt on February 9 opened its border crossing “indefinitely” with Gaza – the Israeli-blockaded Palestinian enclave – against the backdrop of Palestinian political unity talks in Cairo continue, a security source said. (Photo by Said Khatib/AFP Photo) 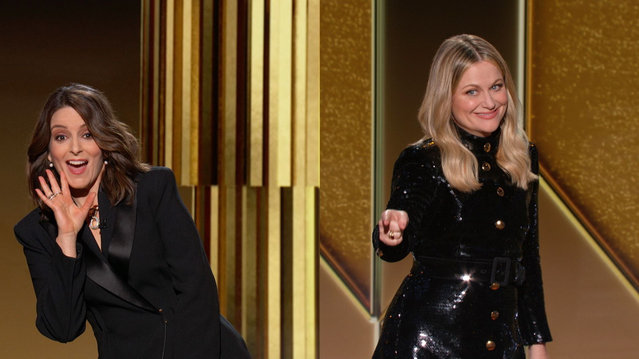 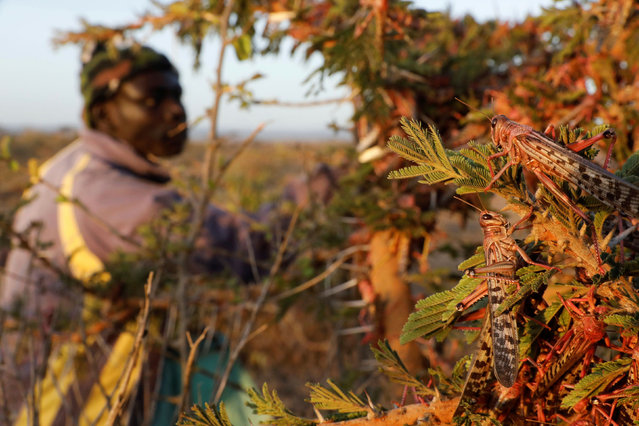 A man harvests desert locusts, near the town of Rumuruti, Kenya, February 1, 2021. (Photo by Baz Ratner/Reuters) Mother and daughter volunteers Niki, right, and Rachel practice their pancake tossing technique in the streets of Wimborne model town and gardens before taking part in the Wimborne Minster virtual pancake race, in Wimborne, England, Tuesday February 16, 2021. Although a physical race cannot take place this year due to the coronavirus restrictions, Wimborne Minster has invited people to film themselves tossing a pancake for 30 seconds and posting it to Facebook. (Photo by Andrew Matthews/PA Wire via AP Photo) 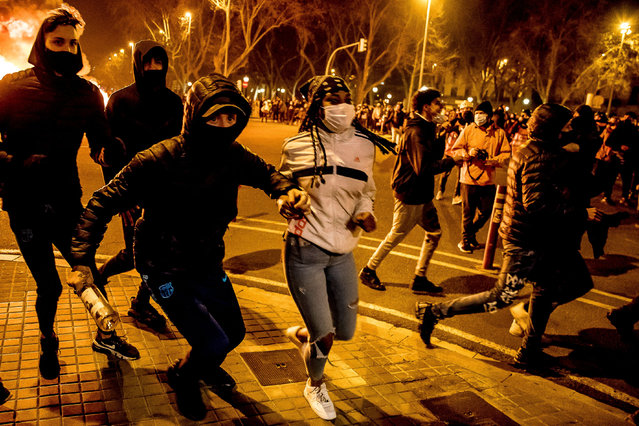 People clash with riot police during a demonstration against the imprisonment of rapper Pablo Hasel, in Barcelona, Spain, on February 19, 2021. Violent street protests over the imprisonment of a rapper have erupted for a fourth straight night in Spain. (Photo by Albert Llop/NurPhoto/Rex Features/Shutterstock) 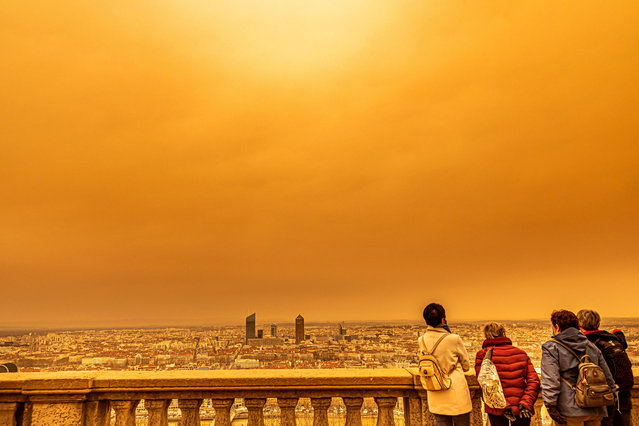 People looking the panoramic view of Lyon from fourviere in the morning with a yellowish-orange sky over the city of Lyon, France on February 6, 2021. This exceptional meteorological phenomenon is linked to a powerful southerly flow that brings spring temperatures and also brings up a large concentration of Saharan dust suspended in the atmosphere. (Photo by Konrad K./SIPA Press/Rex Features/Shutterstock) 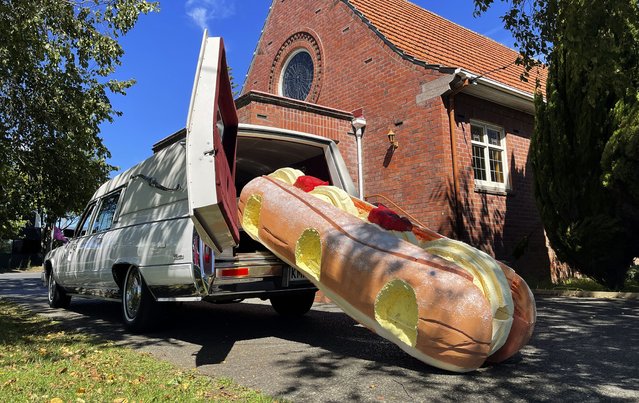 This photo provided by Ross Hall, shows a cream doughnut shaped coffin for the funeral of Phil McLean outside a church in Tauranga, New Zealand on February 17, 2021. Auckland company Dying Art makes unique custom caskets which reflect the people who will eventually lay inside them, whether it's a love for fire engines, a cream doughnut or Lego. (Photo by Ross Hall via AP Photo) 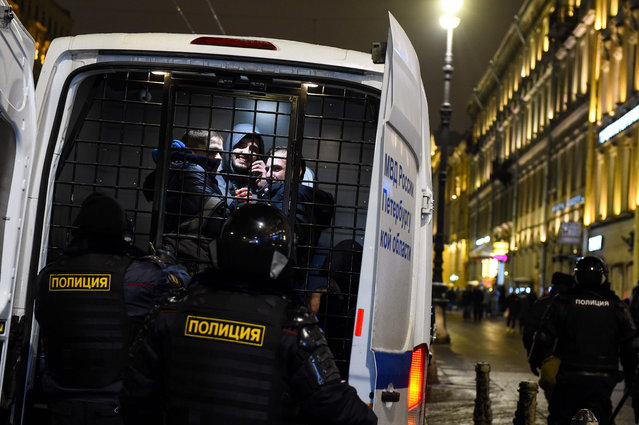 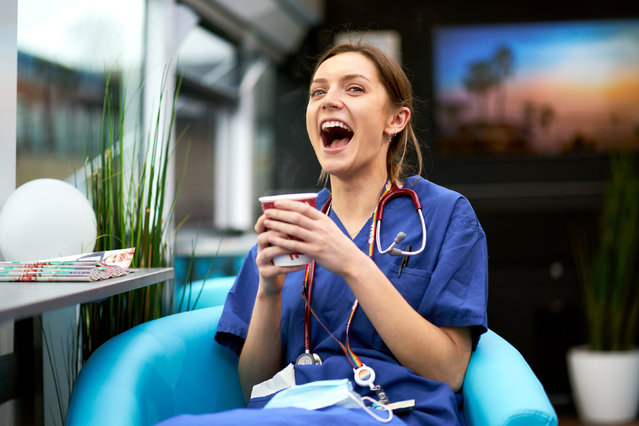 A health worker enjoys a hot drink onboard the Well-being bus at Homerton University hospital in London on February 3, 2021. The bus, which is staffed by volunteer aircrew, is providing free drinks and snacks to NHS staff at the hospital as part of project wingman. (Photo by John Walton/PA Images via Getty Images) 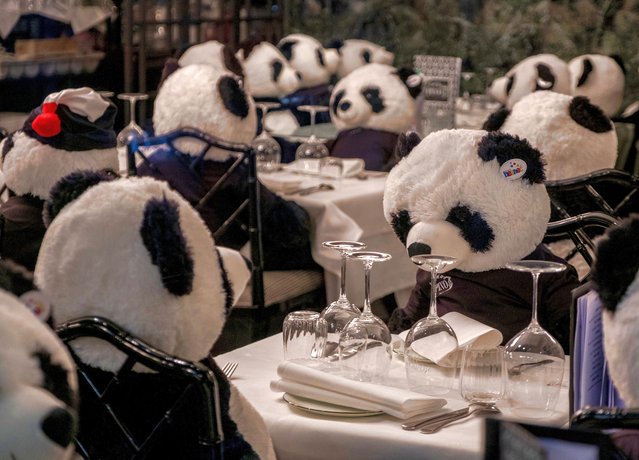 People celebrate the Lunar New Year holiday in Chinatown on February 12, 2021 in New York City. Friday marks the 2021 Lunar New Year, also referred to as Chinese New Year. This year will be recognized as the “Year of the Ox”, named after the second zodiac animal. (Photo by Angela Weiss/AFP Photo) 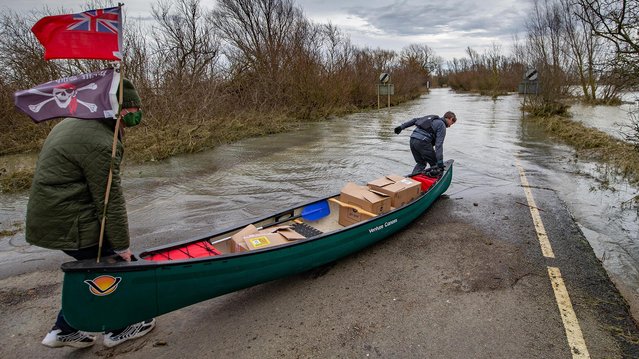 Valentine’s Day meals were delivered by canoe from the Lamb and Flag pub to customers across the Welney Washes on the Cambridgeshire-Norfolk border, United Kingdom on February 14, 2021 where flooding has closed the road. (Photo by Terry Harris/The Times) 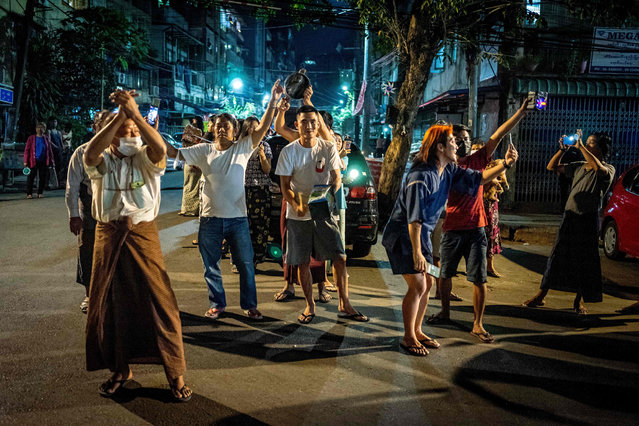 In this photo taken on February 3, 2021 people take part in a noise campaign on the street after calls for protest went out on social media in Yangon as Myanmar's ousted leader Aung San Suu Kyi was formally charged on Wednesday two days after she was detained in a military coup. (Photo by AFP Photo/Stringer) 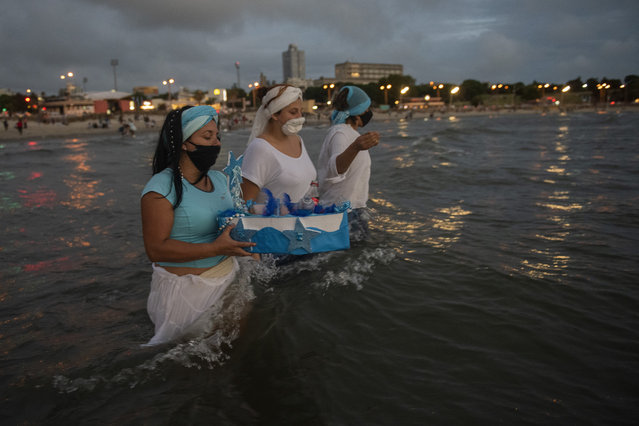 Locals carry an offering during a ritual for the African sea goddess Yemanja at Ramirez Beach in Montevideo, Uruguay, Tuesday, February 2, 2021. Worshippers showed up at Ramirez Beach on Yemanja's feast day, bearing candles, flowers, and fruit though the authorities had asked them not to go because of the COVID-19 pandemic. (Photo by Matilde Campodonico/AP Photo) 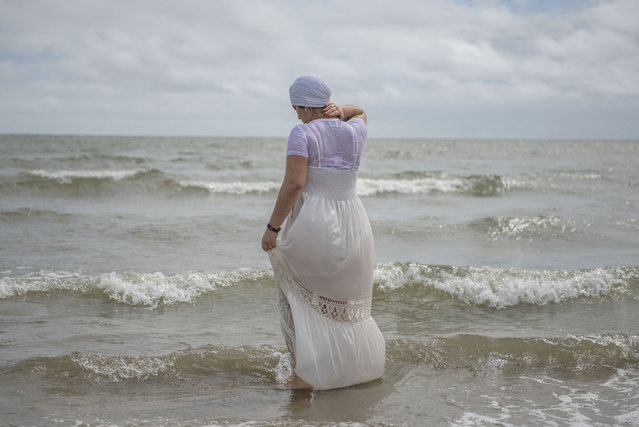 A woman participates in a ritual for the African sea goddess Yemanja at Ramirez Beach in Montevideo, Uruguay, Tuesday, February 2, 2021. (Photo by Matilde Campodonico/AP Photo) 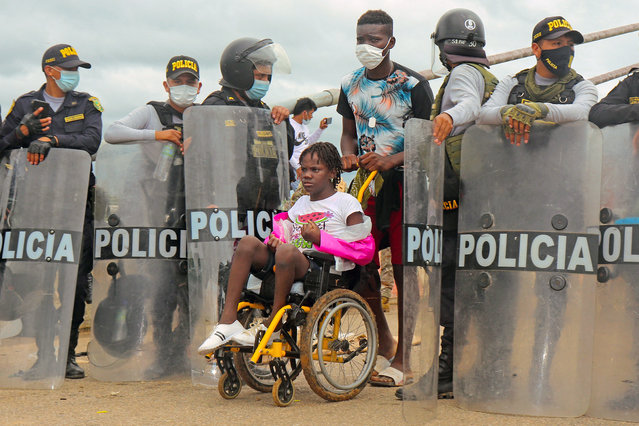 Police open the way to a woman on a wheelchair as a crowd of mix nationality migrants attempt to cross into Peru by the Friendship Bridge on the border with Brazil, 1,600 kilometers southeast of Lima, on February 16, 2021. Some 450 migrants, mostly Haitians, spent six days stranded on Wednesday trying unsuccessfully to enter Peru from Brazil via a border bridge in the Amazon, guarded by military and police, an AFP reporter observed. (Photo by Radio Madre de Dios/AFP Photo) 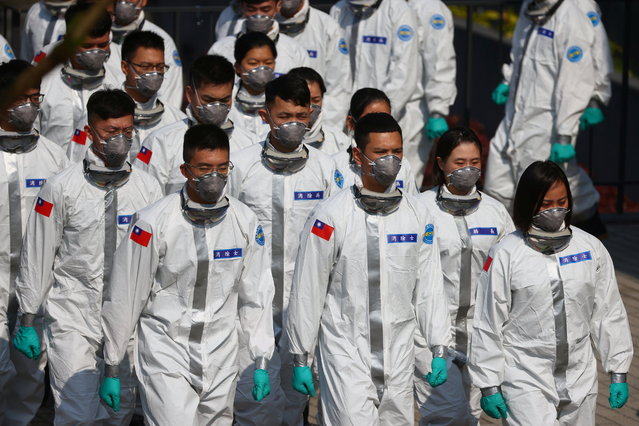