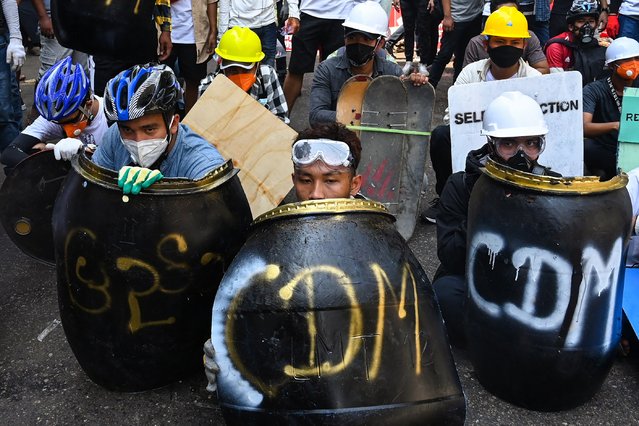 Protesters take cover behind homemade shields during a demonstration against the military coup in Yangon on February 28, 2021. (Photo by Sai Aung Main/AFP Photo) 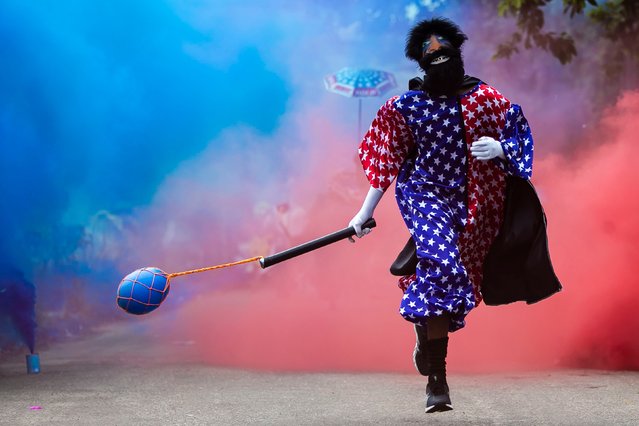 A member of a traditional “Bate-Bola” group, an annual cultural festivity which takes place during the carnival period, celebrates at the street in a suburb in Rio de Janeiro, Brazil, on February 14, 2021. Rio’s city government officially suspended the annual world famous Carnival and its associated street parties due to the COVID-19 pandemic but many traditional parties still took place illegally in defiance of the measures. (Photo by Carl De Souza/AFP Photo) 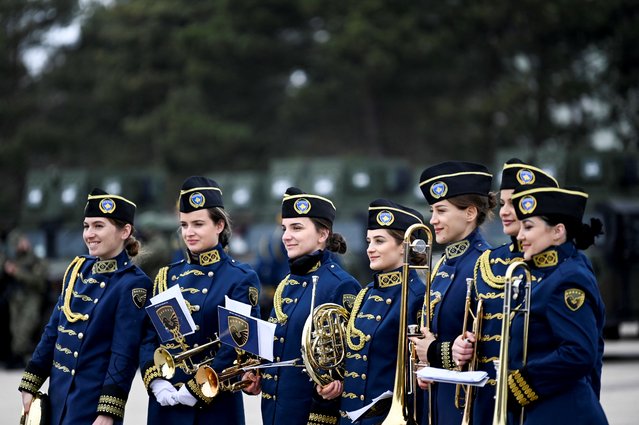 Members of Kosovo Security Forces (KSF) ceremonial band attend a ceremony to mark the 13th anniversary of Kosovo's declaration of independence in Pristina on February 17, 2021. (Photo by Armend Nimani/AFP Photo) 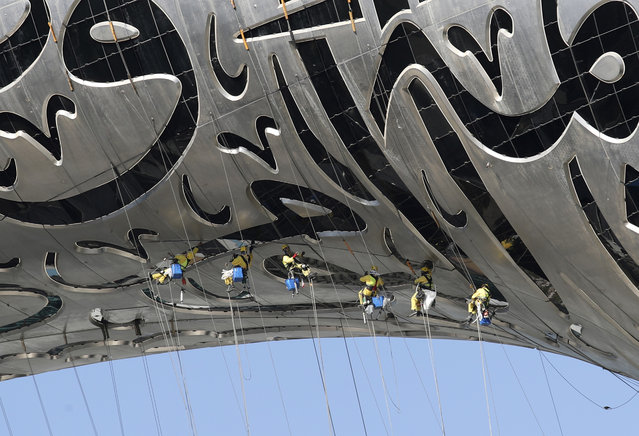 Laborers hang from The Museum of the Future, a museum of innovation and design currently under construction in Dubai, United Arab Emirates, Tuesday, February 2, 2021. (Photo by Kamran Jebreili/AP Photo) 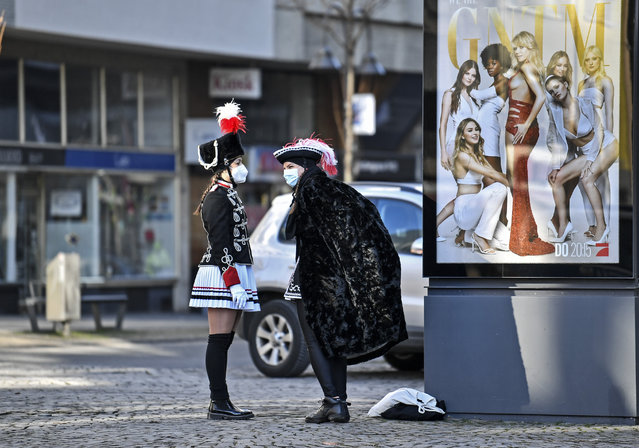 Two women in costumes stand beside an advertising for “Germany's next top model” TV show at the “Alter Markt” where normally tens of thousands of revelers dressed in carnival costumes would celebrate the start of the street carnival in Cologne, Germany, Thursday, February 11, 2021. This year all carnival celebrations are banned due to the coronavirus pandemic. (Photo by Martin Meissner/AP Photo) 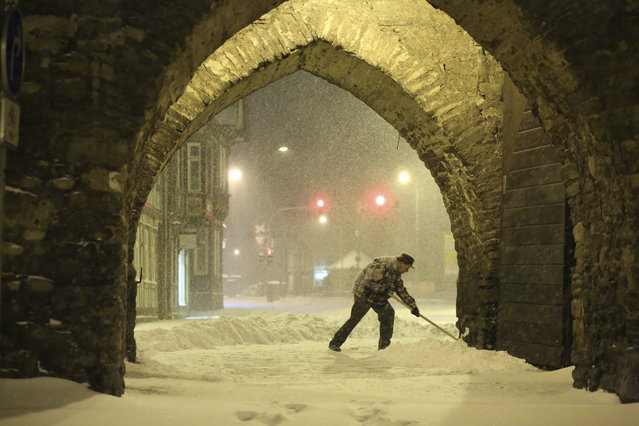 A resident shovels snow under an archway in Wernigerode, Germany, early Sunday morning, February 7, 2021. Low Tristan has caused huge amounts of snow in the Harz mountains, like here in Wernigerode. (Photo by Matthias Bein/dpa via AP Photo) 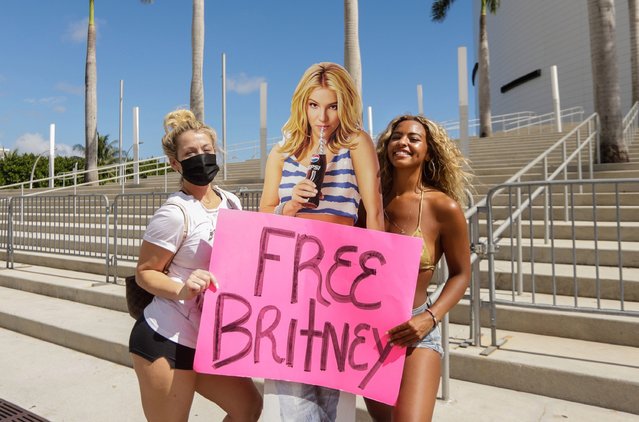 Supporters of Britney Spears holds a sign during a #FreeBritney protest outside American Airlines Arena on February 11, 2021 in Miami, Florida. Spears was placed in a conservatorship managed by her father, Jamie Spears, and an attorney, which controls her assets and business dealings, following her involuntary hospitalization for mental care in 2008. (Photo by John Parra/Getty Images) 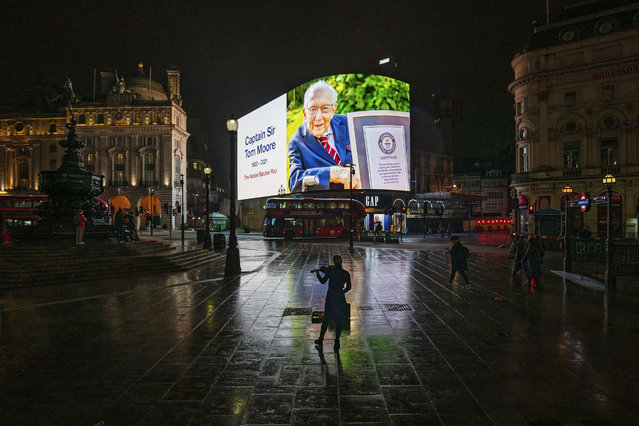 A woman plays the violin as a tribute to Captain Sir Tom Moore is displayed in Piccadilly Circus, London, Tuesday, February 2, 2021. The British World War II veteran who walked into the hearts of a nation in lockdown as he shuffled up and down his garden to raise money for health care workers has died after testing positive for COVID-19. Capt. Tom Moore was 100-years-old. (Photo by Aaron Chown/PA via AP Photo) 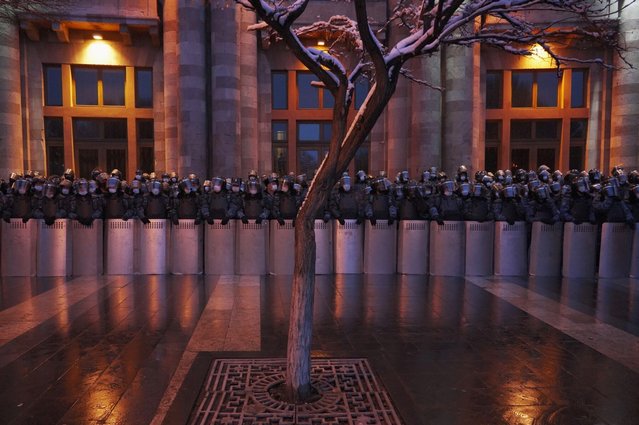 Armenian law enforcement officers stand guard outside the government office during an opposition rally to demand the resignation of Prime Minister Nikol Pashinyan in Yerevan, Armenia on February 20, 2021. (Photo by Artem Mikryukov/Reuters) 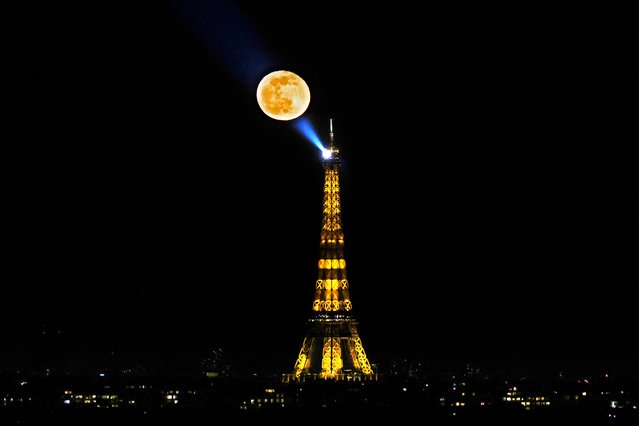 The waning gibbous moon appears in the sky following the weekend's full “Snow Moon”, near the Eiffel Tower in Paris, on February 28, 2021. (Photo by Thomas Coex/AFP Photo) 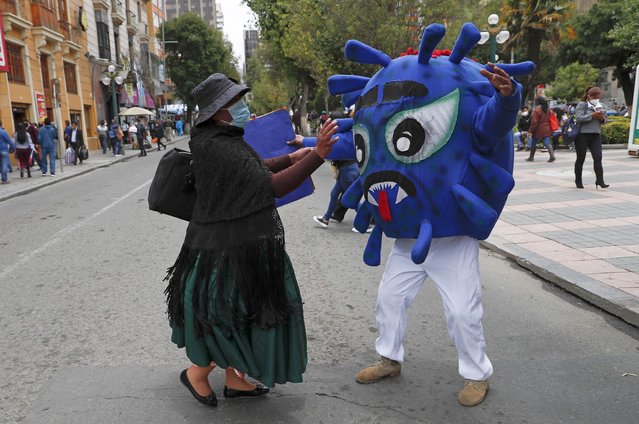 A police officer dressed in a costume representing the COVID-19 virus tries to hug a pedestrian, who resists, along Paseo El Prado as part of an awareness campaign about the spread of the new coronavirus in La Paz, Bolivia, Wednesday, February 10, 2021. (Photo by Juan Karita/AP Photo) 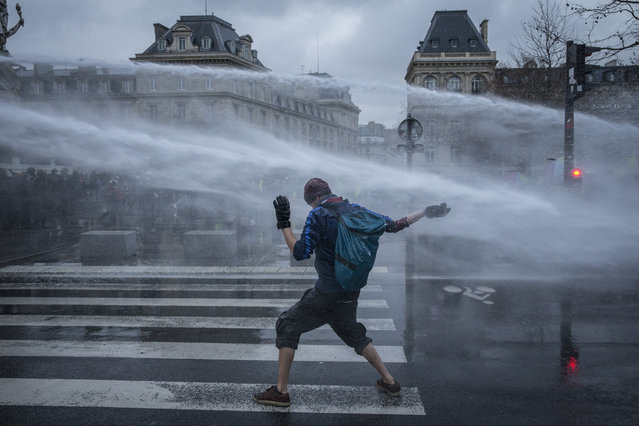 A truck-mounted water cannon sprays a protester during a demonstration against the Global Security Bill on January 30, 2021 at the Place de la République in Paris, France. France's lawmakers passed and adopted the bill known as article 24 of the “comprehensive security” law prohibiting the dissemination of images of the police, alarming journalists and activists saying civil liberties and press freedom could be compromised. Several MPs have criticised the bill's implications and President Macron has come under fire from national journalism unions and the UN for the law and police accountability. (Photo by Kiran Ridley/Getty Images) 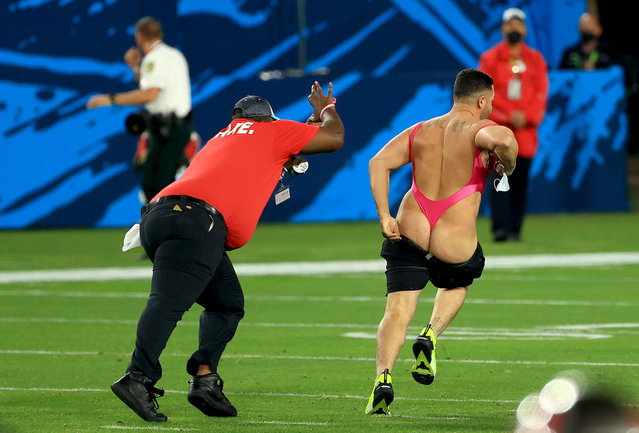 A fan runs on the field during the fourth quarter of Super Bowl LV between the Tampa Bay Buccaneers and the Kansas City Chiefs at Raymond James Stadium on February 07, 2021 in Tampa, Florida. (Photo by Mike Ehrmann/Getty Images) 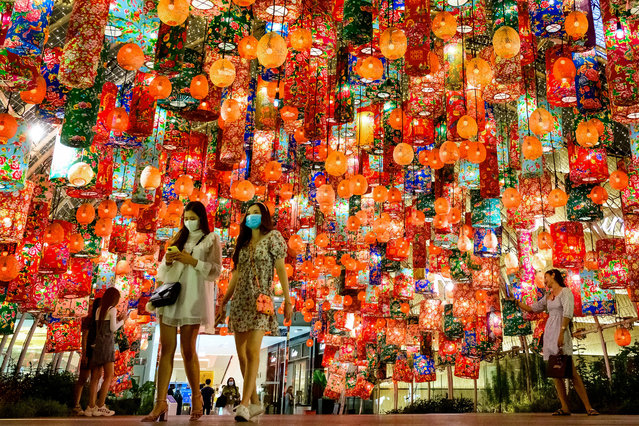 People walk under festive decorations for the upcoming Lunar New Year outside a shopping mall in Bangkok on February 3, 2021. (Photo by Mladen Antonov/AFP Photo) 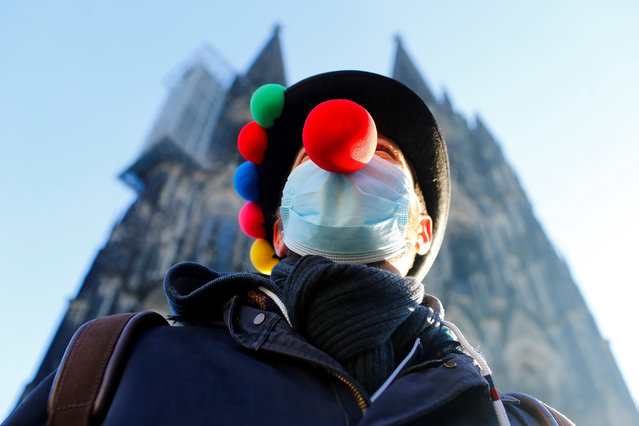 A lonesome reveller poses in front of Cologne Cathedral after carnival festivities were cancelled due to the coronavirus disease (COVID-19) pandemic in Cologne, Germany, February 11, 2021. (Photo by Thilo Schmuelgen/Reuters) 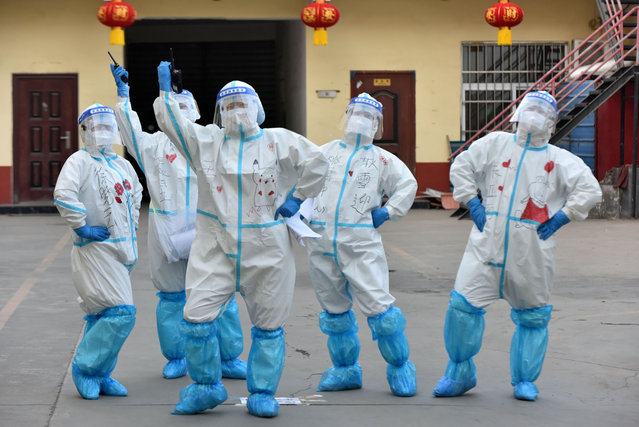 Medical workers cheer for residents who will conclude quarantine at a hotel and return home for Spring Festival holiday on February 7, 2021 in Shijiazhuang, Hebei Province of China. (Photo by Ren Quanjun/VCG via Getty Images) 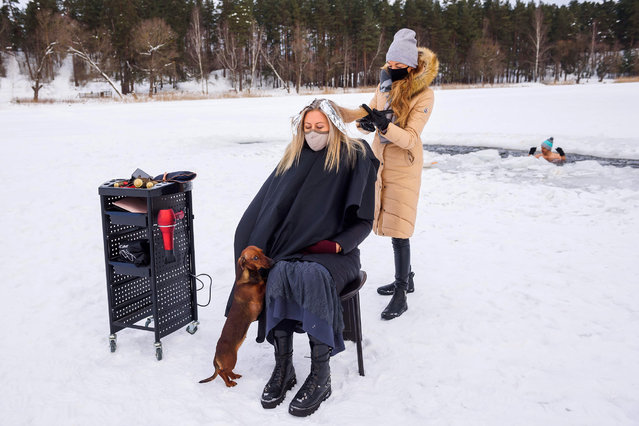 An hairdresser cuts hair on the frozen lake Babelitis while a winter swimmer enjoy swimming in an ice hole on February 15, 2021, in Riga, Latvia, as hairdressers are not allowed to work due to the new coronavirus COVID-19 pandemic. (Photo by Gints Ivuskans/AFP Photo) 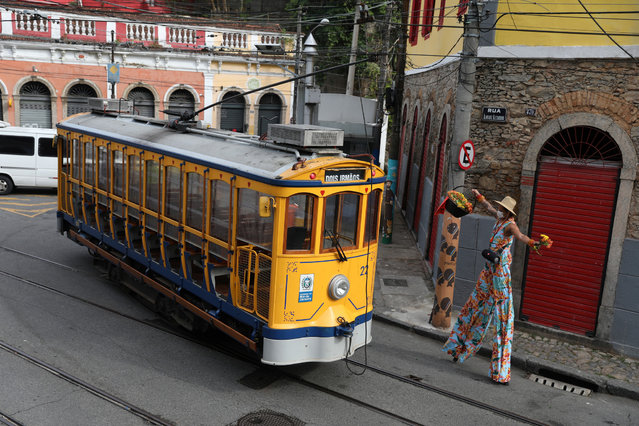 Anilson Costa, reveller of the annual block party “Ceu na Terra”, walks along the Santa Teresa neighborhood where the block party used to be celebrated, as Carnival celebrations have been canceled, amid the coronavirus disease (COVID-19) pandemic, in Rio de Janeiro, Brazil on February 12, 2021. (Photo by Pilar Olivares/Reuters) 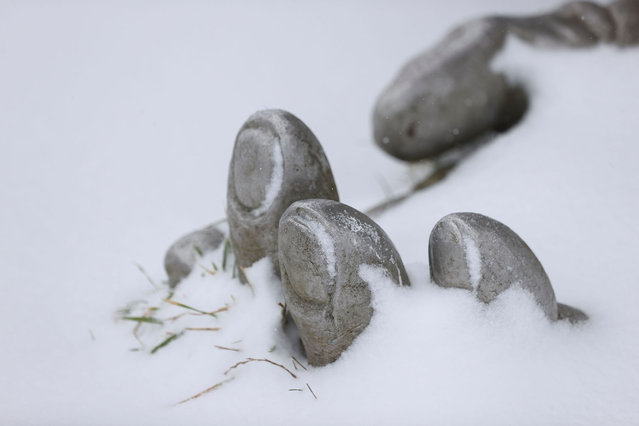 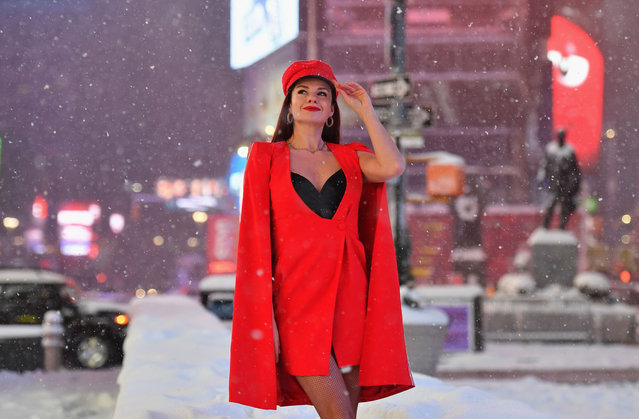 A woman poses in the snow at Times Square during a winter storm on February 1, 2021 in New York City. A powerful winter storm is set to dump feet of snow along a stretch of the US east coast including New York City on February 1, 2021, after blanketing the nation's capital. The National Weather Service issued storm warnings from Virginia to Maine – a swathe home to tens of millions of people – and forecast snowfall of 18 to 24 inches (45-60 centimeters) in southern New York, northeastern New Jersey and parts of southwest Connecticut. (Photo by Angela Weiss/AFP Photo)
Edit Del
16 Jan 2022 03:58:00, post received 0 comments
Publication archive:
←   →
Popular tags:
All tags
Last searches: