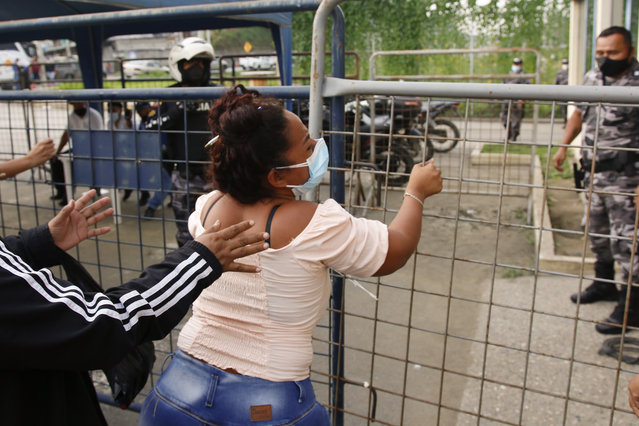 A relative of an inmate grabs a fence outside the Centro de Privación de Libertad Zona 8 prison where riots broke out in Guayaquil, Ecuador, Tuesday, February 23, 2021. Deadly riots broke out in prisons in three cities across the country due to fights between rival gangs, according to police. (Photo by Angel Dejesus/AP Photo) 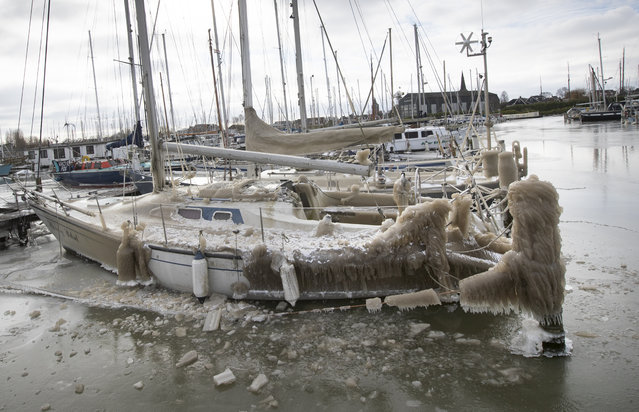 Icicles form on a ship in the marina of Monnickendam, Netherlands, Tuesday, February 9, 2021. With freezing temperatures forecast for more than a week in the Netherlands, ice fever is sweeping the nation, offering a welcome respite from grim coronavirus news while also creating a challenge for authorities trying to uphold social distancing measures. (Photo by Peter Dejong/AP Photo) 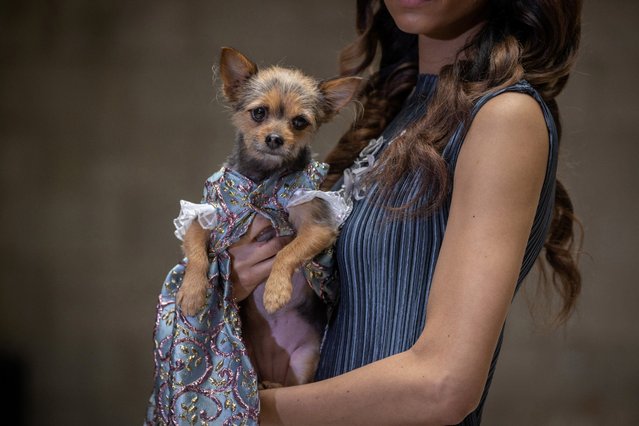 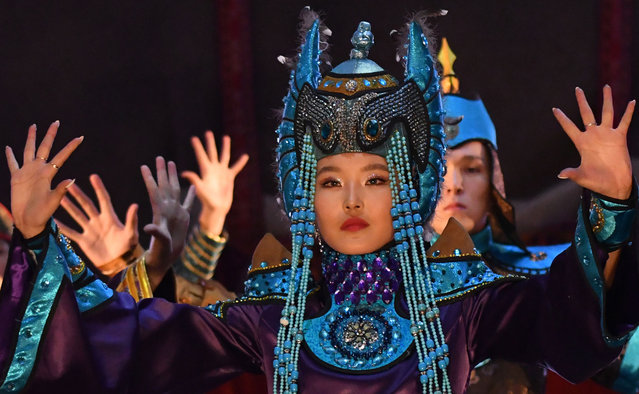 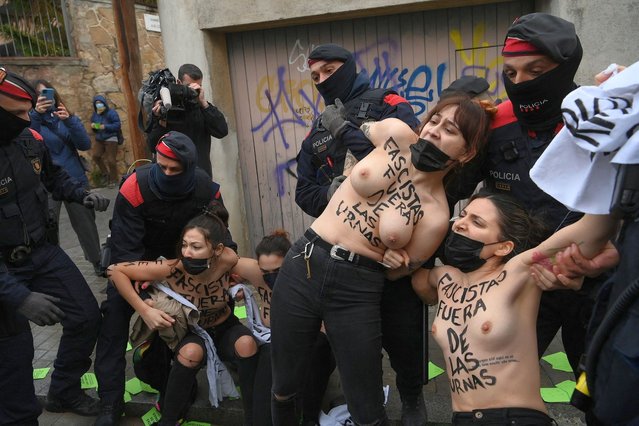 Femen activists with their bare chests reading “Fascists out of ballot boxes” are held back by Catalan regional police forces Mossos d'Esquadra as they protest against far-right Vox party candidates in Barcelona during regional elections in Catalonia on February 14, 2021. Catalonia is voting in an election overshadowed by the pandemic which Madrid hopes will unseat the region's ruling separatists more than three years after a failed bid to break away from Spain. (Photo by Lluis Gene/AFP Photo/Profimedia) 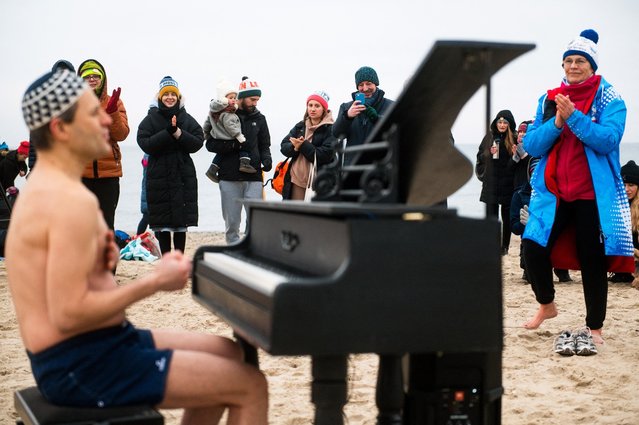 Bystanders applaud for Polish pianist Tomasz Szwelnik, dressed only in swim shorts, as he performs during the charity event “Sea of Angels” for Mikolaj Charuk, a disabled 16-year-old pianist from Gdansk, at the beach in Sopot, Poland, on February 28, 2021. The performance was intended to raise money for the surgery of Mikolaj, who was born without a femur and who collects for his surgery to fully live and develop. The gathered people, accompanied by the piano music, entered the sea for a good cause. (Photo by Mateusz Slodkowski/AFP Photo/Profimedia) 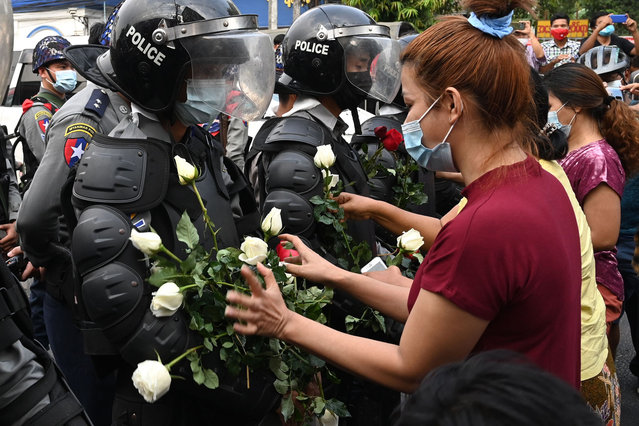 A protester gives bouquets of flowers to a line of riot police during a demonstration against the military coup in Yangon on February 6, 2021. (Photo by AFP Photo/Stringer) 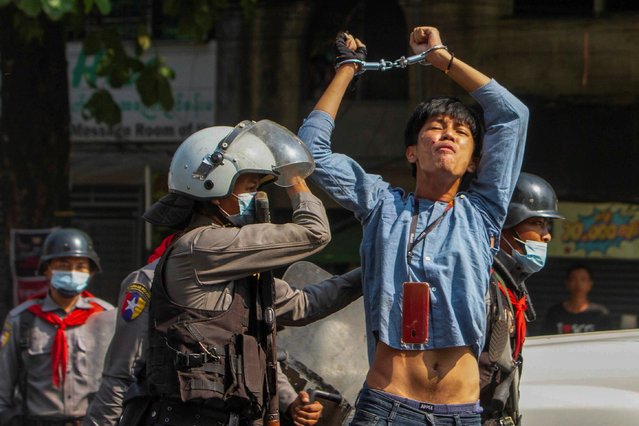 A pro-democracy protester is detained by riot police during a rally against the military coup in Yangon, Myanmar, February 27, 2021. (Photo by Reuters/Stringer) 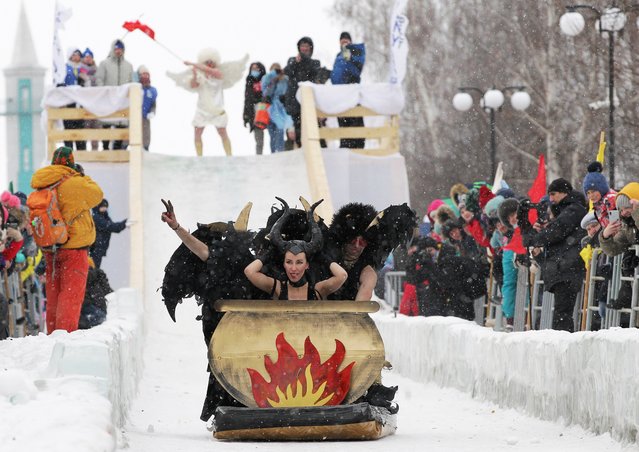 Participants ride down a slope during the “Sunnyfest” festival of unusual sledges in the town of Mamadysh in the Republic of Tatarstan, Russia on February 6, 2021. (Photo by Alexey Nasyrov/Reuters) 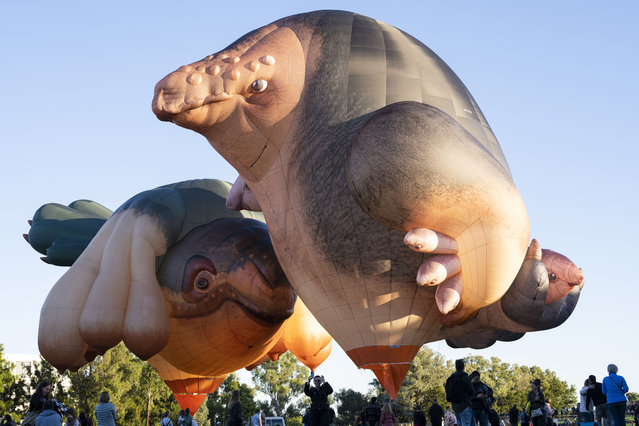 People watch the Skywhale and Skylwahlepapa hover during the world premiere on February 7, 2021 in Canberra, Australia. Skywhalepapa is the latest hot air balloon creation by artist Patricia Piccinini and is a companion piece to Skywhale. Skywhalepapa is as tall as a seven-story building and used 3.6km of fabric in the construction of the envelope. The 1.5m wide fabric was cut into 2343 panels to create the balloon. (Photo by Jamila Toderas/Getty Images) 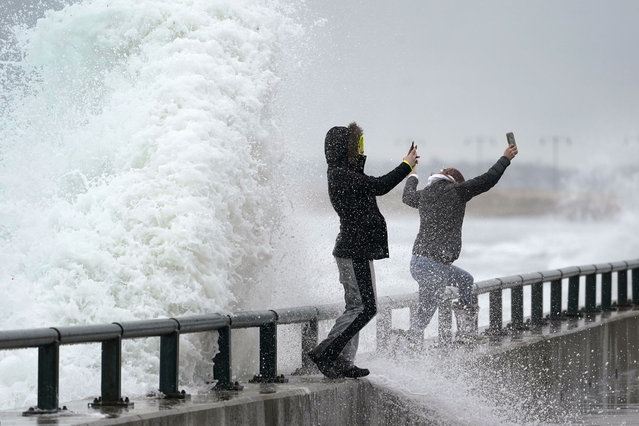 Two women jump off a seawall as they photograph rough surf along Lynn Shore Reservation in the aftermath of a snowstorm, Tuesday, February 2, 2021, in Lynn, Mass. A sprawling, lumbering winter storm has walloped the Eastern U.S., shutting down coronavirus vaccination sites, closing schools and halting transit. (Photo by Elise Amendola/AP Photo) 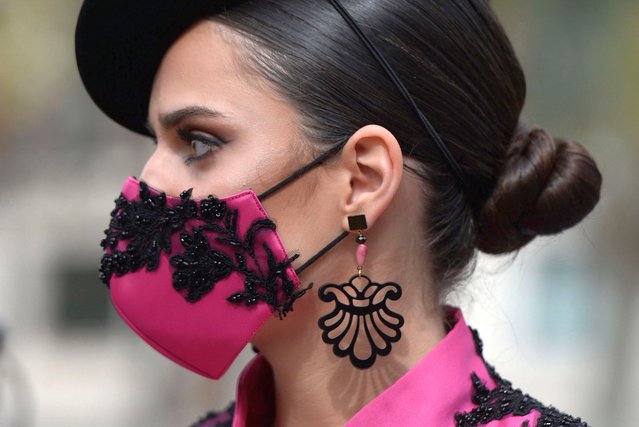 A model dressed in a flamenco dress takes part in a protest to shed light on the difficulties the flamenco fashion sector is facing over coronavirus restrictions, in Seville on February 26, 2021. (Photo by Cristina Quicler/AFP Photo) 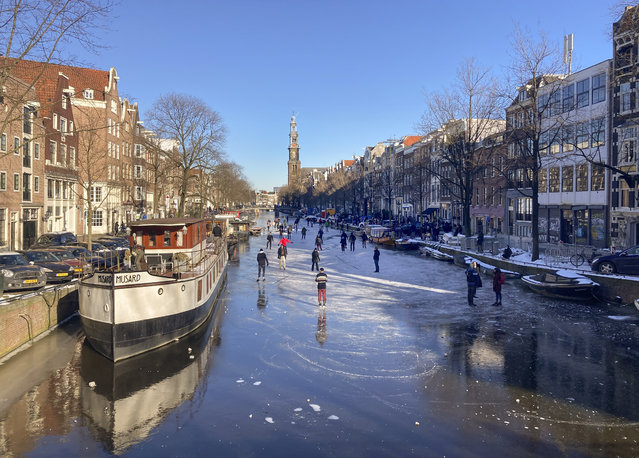 Dozens of skaters took to the frozen surface of Amsterdam's historic Prinsengracht canal in Amsterdam, Netherlands, Saturday, February 13, 2021, as the deep freeze gripping Europe briefly made it possible to skate on a small section of the canal for the first time since 2018. People skated and walked on a small stretch of ice between two bridges close to the landmark Westerkerk before growing cracks in the ice forced all but the most daring off the ice. in Amsterdam, Netherlands, Saturday, Feb. 13, 2021. (Photo by Mike Corder/AP Photo) 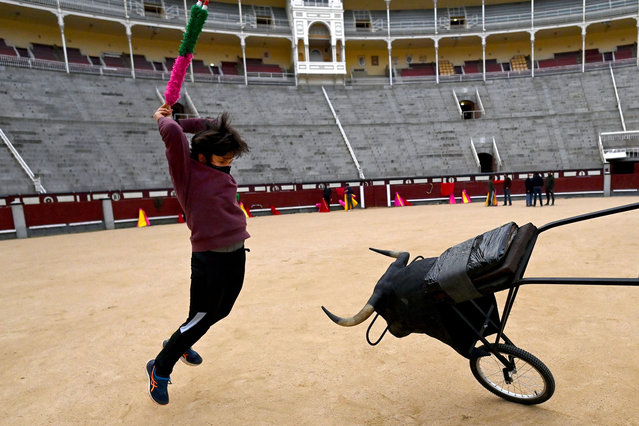 A pupil practices at the Bullfighting School in Las Ventas bullring in Madrid on February 4, 2021. (Photo by Gabriel Bouys/AFP Photo) 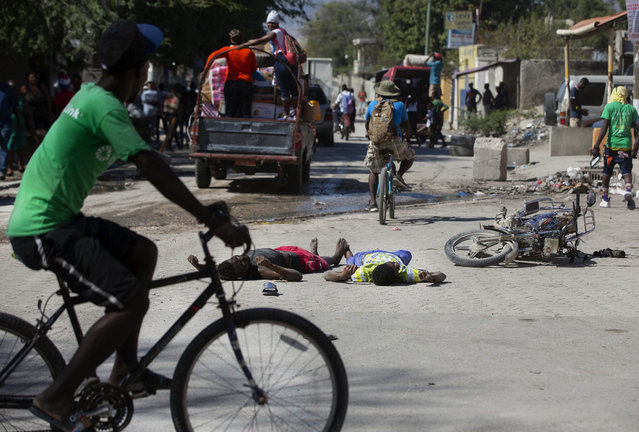 The bodies of two inmates lie on the street outside the Croix-des-Bouquets Civil Prison after an attempted breakout, in Port-au-Prince, Haiti, Thursday, February 25, 2021. At least seven people were killed and one injured after eyewitnesses told The Associated Press that several inmates tried to escape from the prison in Haiti’s capital. (Photo by Dieu Nalio Chery/AP Photo) 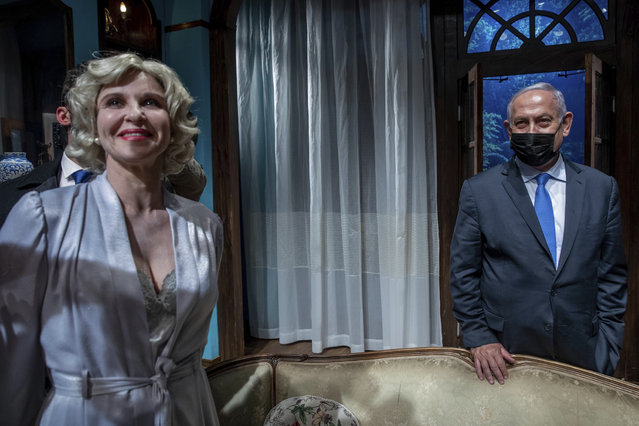 Israeli Prime Minister Benjamin Netanyahu meets Israeli actress Carmit Mesilati Kaplan, right, during a visit to the Khan theater ahead of the re-opening of the culture sector, in Jerusalem on Tuesday, February 23, 2021. (Photo by Ohad Zwigenberg/Pool Photo via AP Photo) 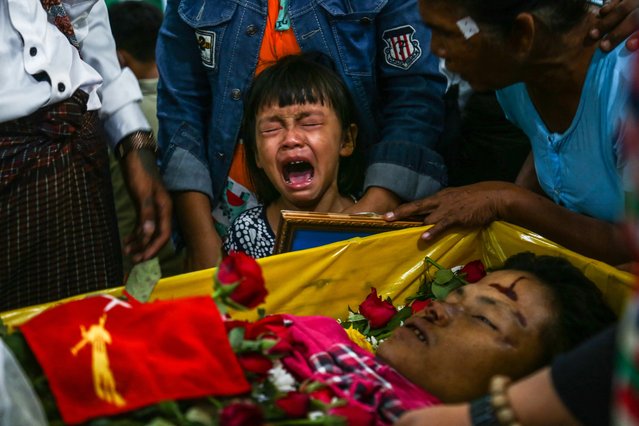 The daughter of Zwee Htet Soe, a protester who died during a demonstration against the military coup on March 3, cries during her father's funeral in Yangon on March 5, 2021. (Photo by AFP Photo/Stringer) 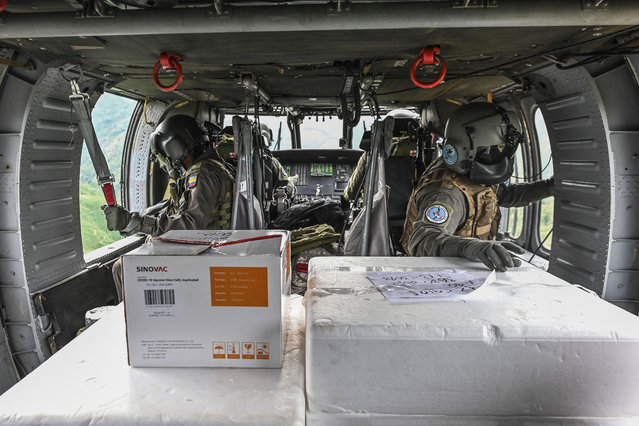 Colombian Air Force members fly on a Black Hawk helicopter as they transport a container with Sinovac vaccines against COVID-19 to be distributed in the rural areas of Antioquia, Colombia, on March 10, 2021. (Photo by Joaquin Sarmiento/AFP Photo) 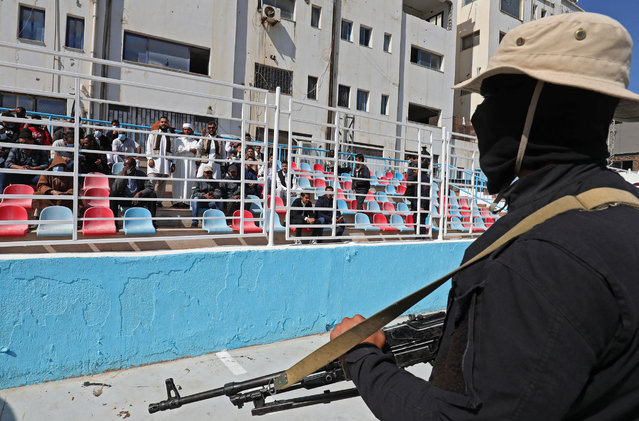 The relatives of prisoners of war, loyal to the forces of Libya's eastern military strongman Khalifa Haftar, wait for their release by the new Libyan unity government on March 31, 2021 in the port city of Zawiya, 50 kilometres (30 miles) west of the Libyan capital Tripoli, following the latest peace deal between the North African country's former rival governments. The two sides have completed more than one prisoner swap this year as Libya's eastern administration officially handed over power to a new executive that is meant to unify the war-torn country and steer it towards elections late this year. The Government of National Unity (GNU), selected through a UN-supported process, is the latest internationally backed bid to end a decade of chaos in the North African nation and unite rival administrations. (Photo by Mahmud Turkia/AFP Photo)
Edit Del
18 Jan 2022 07:22:00, post received 0 comments
Publication archive:
←   →
Popular tags:
All tags
Last searches: