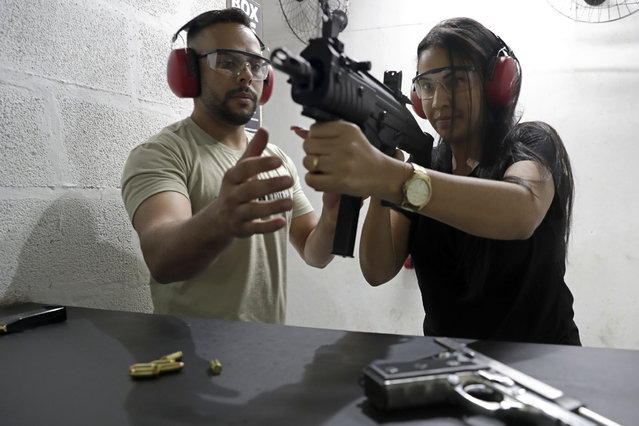 Gisely Nunes learns to handle a submachine gun from an instructor at the Valparaiso Shooting Club on the outskirts of Brasilia, Brazil, Saturday, March 6, 2021. Newly-issued gun decrees, which have worried public security analysts, are to take effect by mid-April unless the Brazilian congress or courts intervene. (Photo by Eraldo Peres/AP Photo) 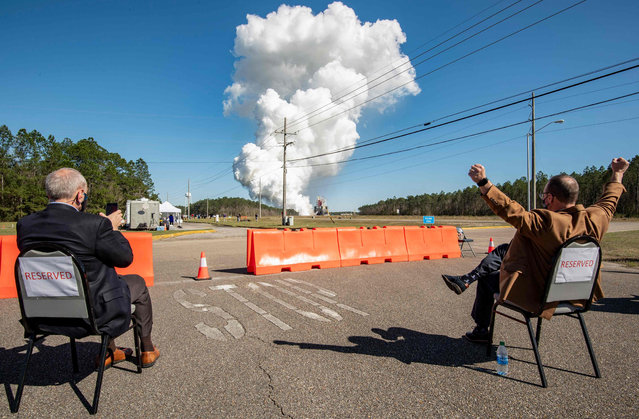 Acting NASA Administrator Steve Jurczyk, left, and Rick Gilbrech, director of NASA's Stennis Space Center, right, watch as the core stage for the first flight of NASAs Space Launch System rocket undergoes a second hot fire test in the B-2 Test Stand, Thursday, March 18, 2021, at NASAs Stennis Space Center near Bay St. Louis, Mississippi. The four RS-25 engines fired for the full-duration of 8 minutes during the test and generated 1.6 million pounds of thrust. The hot fire test is the final stage of the Green Run test series, a comprehensive assessment of the Space Launch Systems core stage prior to launching the Artemis I mission to the Moon. (Photo by NASA/Robert Markowitz via Getty Images) 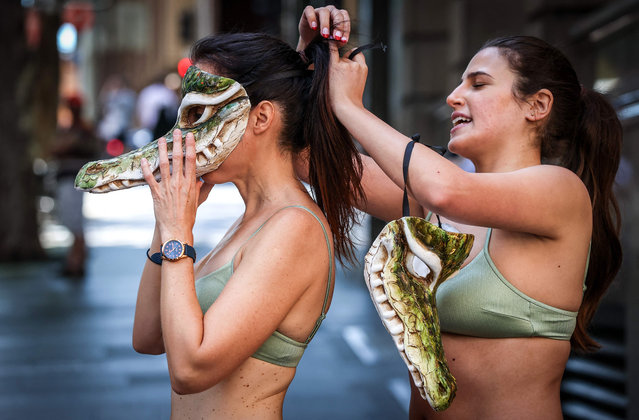 Activists from the animal rights group PETA wearing bikinis and crocodile masks assist each other outside a store of the French fashion label Hermes in Sydney on March 4, 2021, as they protest against their use of crocodile skins and the recent purchases by Hermes and LVMH of crocodile farms in Australia's Northern Territory. (Photo by David Gray/AFP Photo) 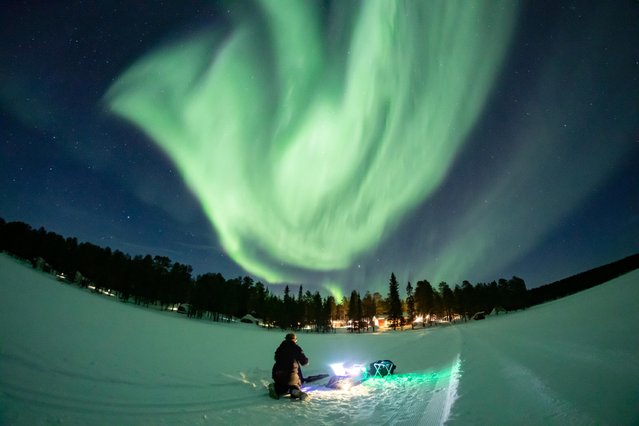 The Aurora Borealis (Northern Lights) are seen over the sky in Torassieppi in Lapland, Finland on March 2, 2021. (Photo by Alexander Kuznetsov/Reuters) 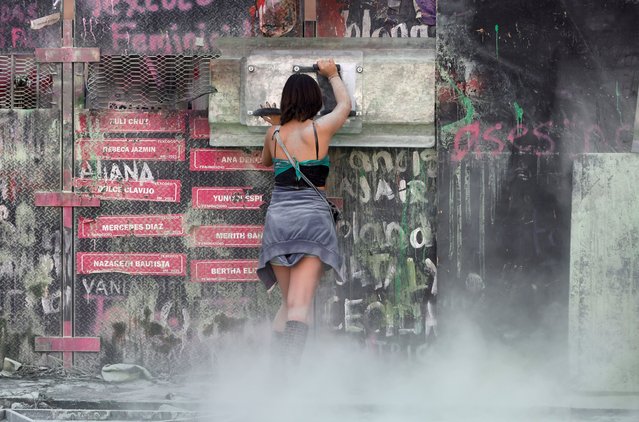 A woman pushes a shield towards fences placed outside the National Palace during a protest on International Women's Day, in Mexico City, Mexico, March 8, 2021. (Photo by Carlos Jasso/Reuters) 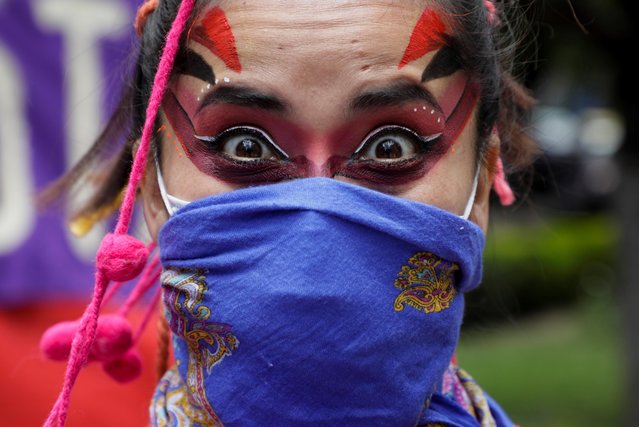 A woman with a painted face takes part in a protest to mark International Women's Day in La Paz, Bolivia, March 8, 2021. (Photo by David Mercado/Reuters) 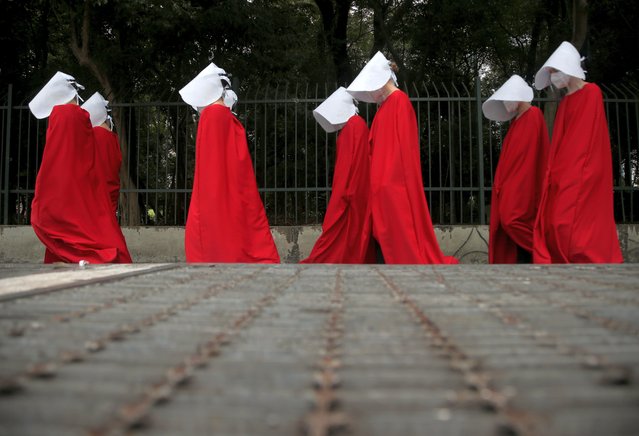 Activists dressed in Handmaid's Tale costumes walk as they take part in a demonstration to mark International Women's Day in Sao Paulo, Brazil on March 8, 2021. (Photo by Carla Carniel/Reuters) 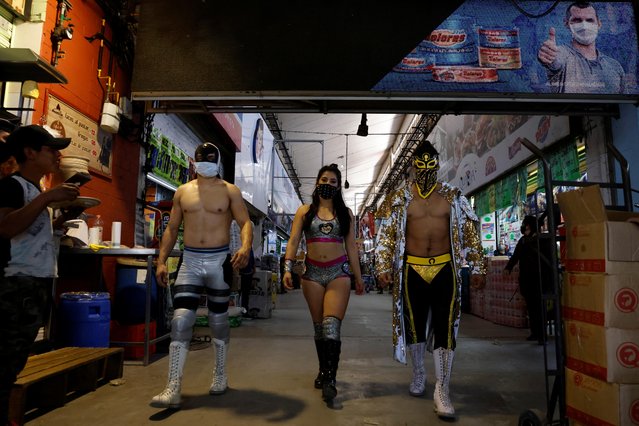 Lucha libre wrestlers, Sussy love, Bandido, and Gravity along with others arrive to encourage mask-less people to wear masks to aid the prevention against the coronavirus at the Central Abastos market, in Mexico City, Mexico on March 10, 2021. (Photo by Carlos Jasso/Reuters) 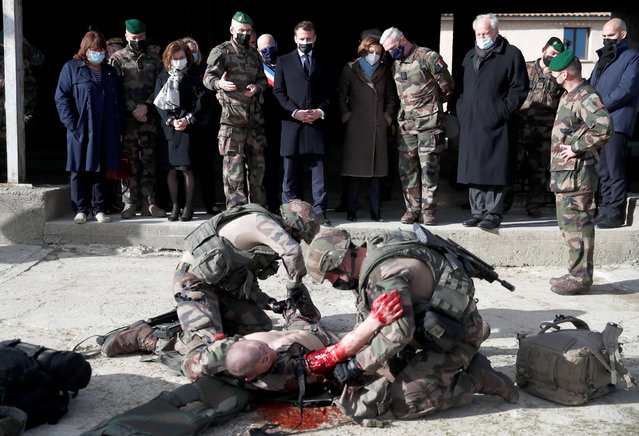 French President Emmanuel Macron watches as soldiers show their skills during a visit at the Ferme du Cuin, the training center of the 4th Regiment of the Foreign Legion, in Saint-Gauderic, France, March 12, 2021. (Photo by Stephane Mahe/Pool via Reuters) 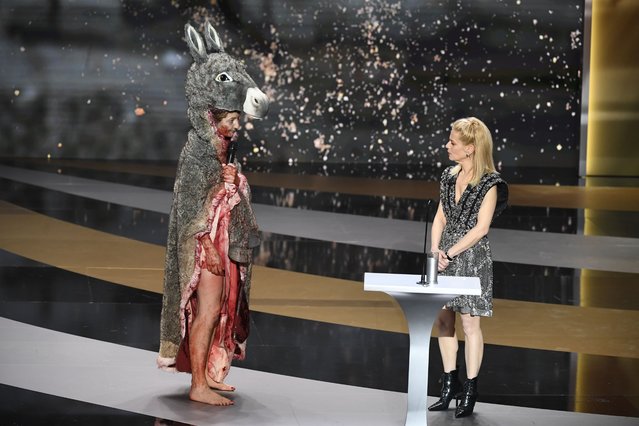 Actress Corinne Masiero, wearing a “Peau d'Ane” costume, delivers a speech on stage next to Master of Ceremony Marina Fois during the 46th Cesar Awards ceremony at the Olympia concert hall in Paris, France, March 12, 2021. (Photo by Bertrand Guay/Pool via Reuters) 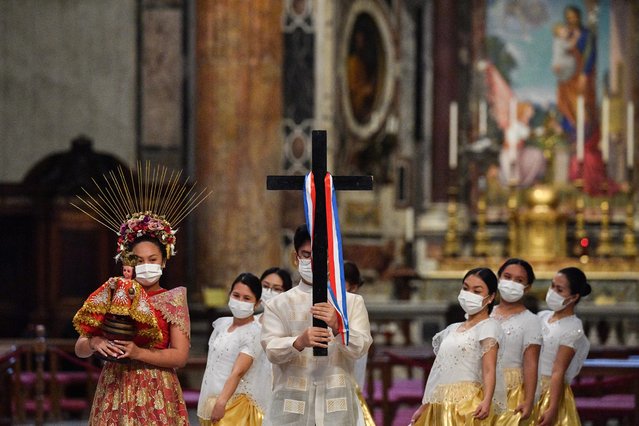 Members of the Philippine community arrive to take part in a mass held by Pope Francis to mark 500 years of Christianity in the Philippines, in St. Peter’s Basilica at the Vatican, March 14, 2021. (Photo by Tiziana Fabi/Pool via Reuters) 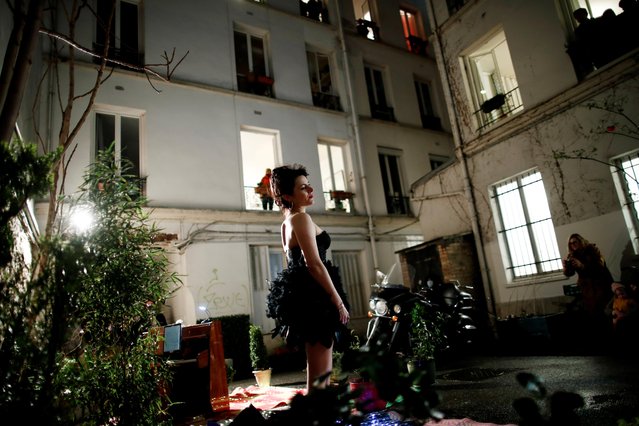 Opera singer Marthe Alexandre performs in front of a gathering of neighbors in a courtyard during the outbreak of the coronavirus disease (COVID-19) in Paris, France, March 12, 2021. (Photo by Benoit Tessier/Reuters) 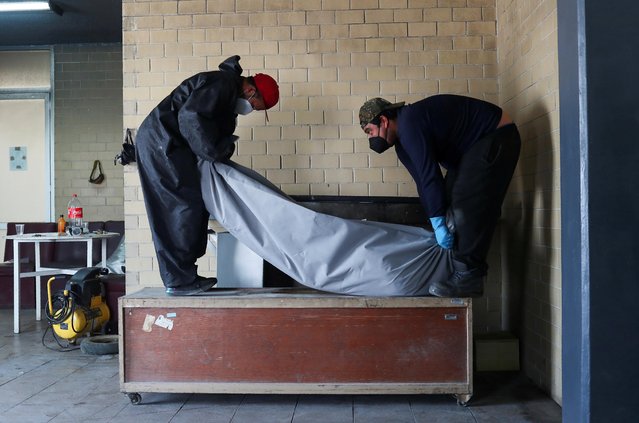 Crematorium employees move a body before the cremation of a person who died of the coronavirus disease (COVID-19), at the Municipal Cemetery in Nezahualcoyotl, State of Mexico, Mexico on March 12, 2021. (Photo by Henry Romero/Reuters) 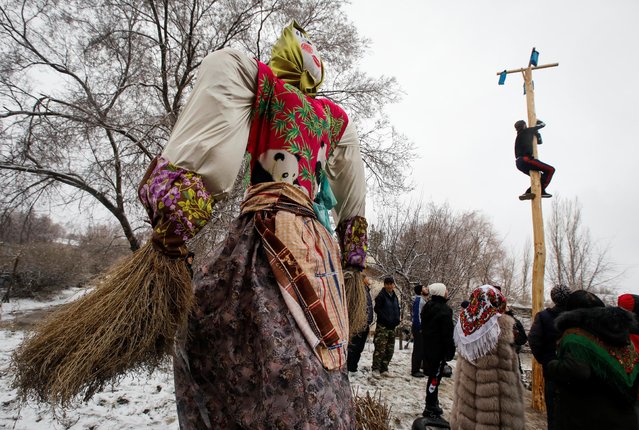 A man climbs up a wooden pole to get a prize next to an effigy of Lady Maslenitsa during celebrations of Maslenitsa, also known as Pancake Week, which is a pagan holiday marking the end of winter, in the village of Sokuluk, Kyrgyzstan, March 14, 2021. (Photo by Vladimir Pirogov/Reuters) 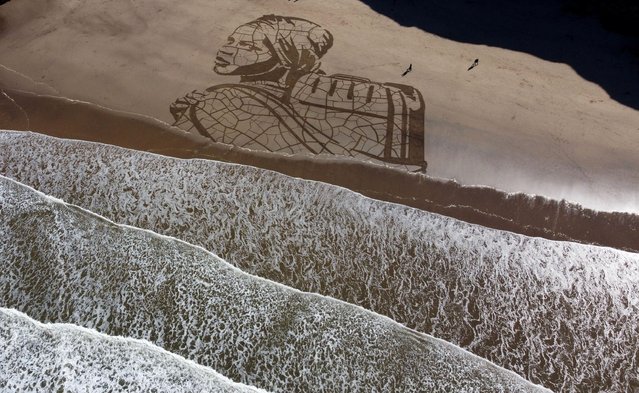 WaterAid and Sand In Your Eye giant sand portrait is seen on Whitby Beach, Britain on March 15, 2021. The 60m wide drawing by artist Jamie Wardley shows a child carrying water on dry, cracked ground next to the rising tide, to highlight the impact climate change is having on people's access to water. WaterAid have released a new report “Turn the Tide: The State of The World's Water 2021” by Nadiya Hussain. (Photo by Lee Smith/Reuters) 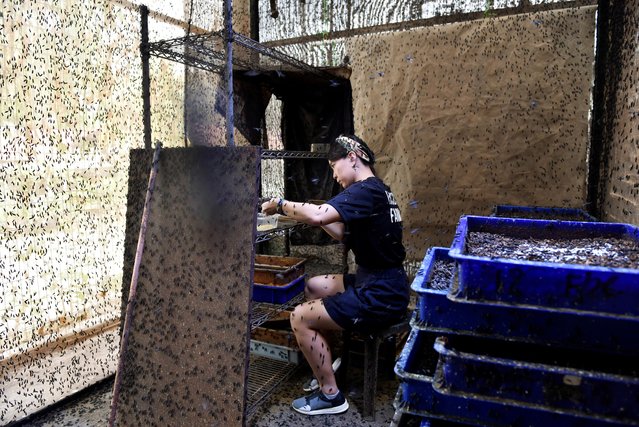 Chua Kai-Ning, 25, chief marketing officer and co-founder of Insectta, demonstrates to Reuters how the eggs from black soldier flies (Hermetia Illucens) are harvested in the mating chamber in Singapore on March 3, 2021. (Photo by Caroline Chia/Reuters) 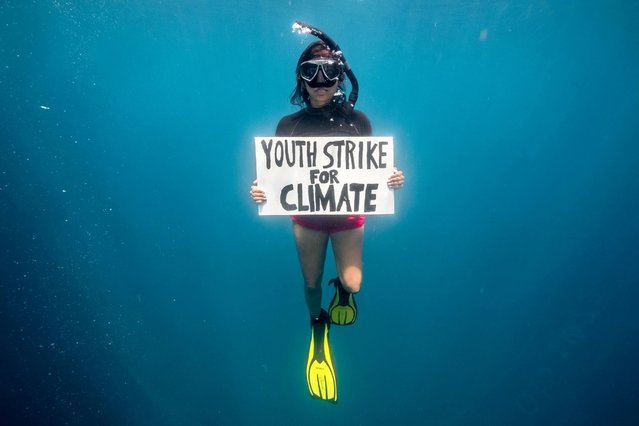 Mauritian scientist and climate change activist Shaama Sandooyea 24, holds a placard reading Youth Strike For Climate, during an underwater protest at the Saya de Malha Bank to highlight the need to protect the world's largest seagrass meadow within the Mascarene plateau, Mauritius on March 6, 2021. (Photo by Christophe Van Der Perre/Reuters) 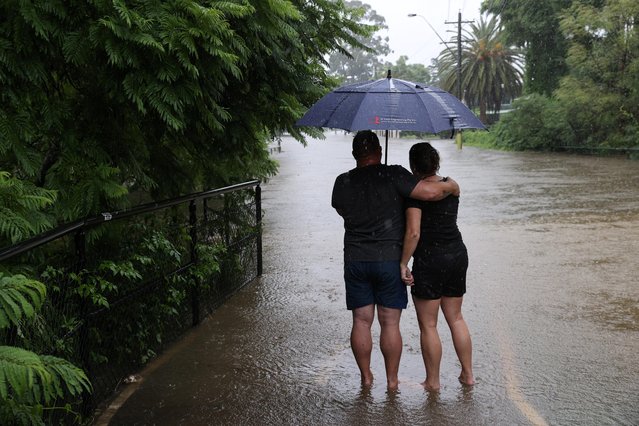 Local residents look in the direction of their flooded home as the state of New South Wales experiences widespread flooding and severe weather, in Sydney, Australia, March 21, 2021. (Photo by Loren Elliott/Reuters) 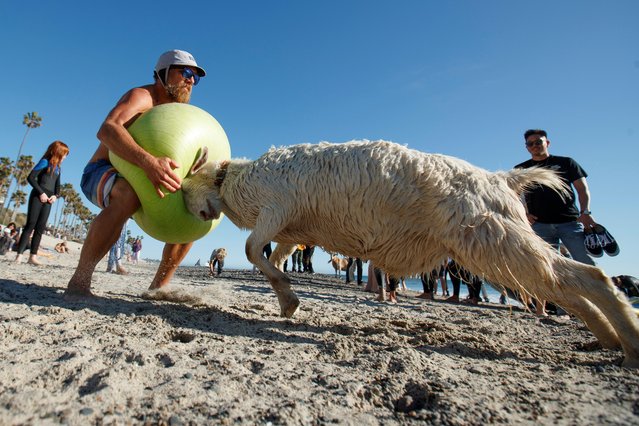 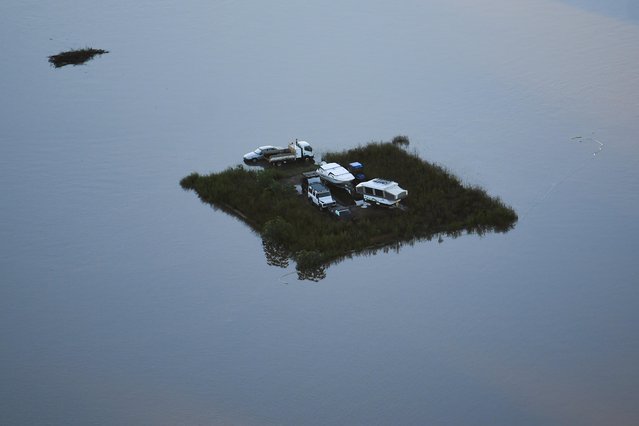