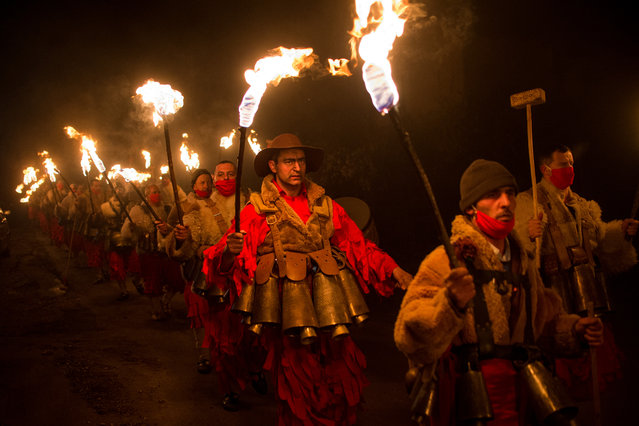 Bulgarian dancers wearing costumes perform a ritual dance with flaming torches during the Kukeri Carnival in the village of Dolna Sekirna, western Bulgaria, on January 13, 2021. The Kukeri Carnival is a festival of brightly colored masks and costumes which marks the beginning of Spring. Every participant makes his own multi-colored personal mask, covered with beads, ribbons and woolen tassels. The heavy swaying of the main mummer is meant to represent wheat heavy with grain, and the bells tied around the waist are intended to drive away the evil spirits and the sickness. (Photo by Nikolay Doychinov/AFP Photo) 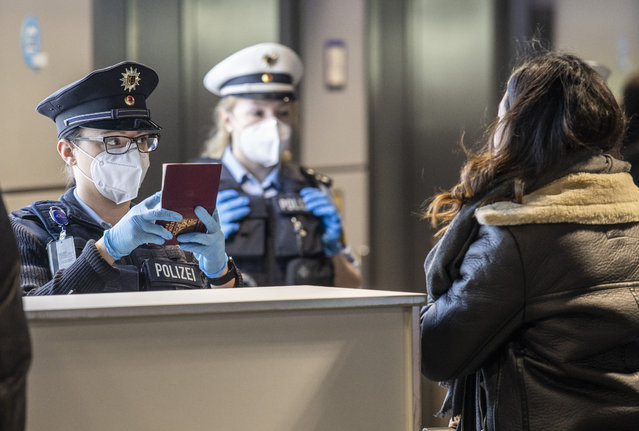 In this Sunday, January 24, 2021 file photo, officers of the German Federal Police check passengers arriving by plane from Prague at the Frankfurt Airport in Frankfurt, Germany. The European Union's executive body proposed Monday Jan. 25, 2021, that the bloc's 27 nations impose more travel restrictions to counter the worrying spread of new coronavirus variants but make sure to keep goods and workers moving across EU borders. (Photo by Boris Roessler/dpa via AP Photo, File) 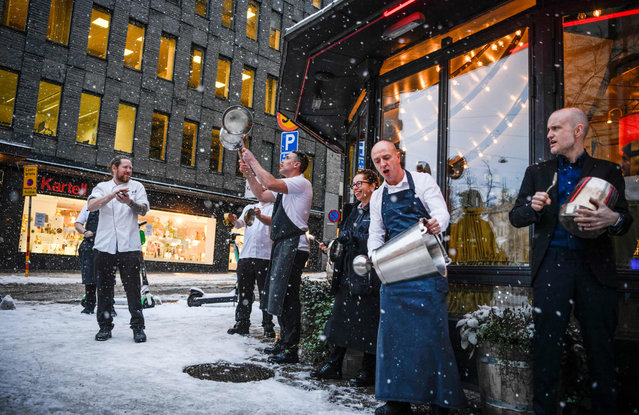 Restaurant owners and their staff make noise to protest against restrictions due to the corona (Covid-19) pandemic, outside a restaurant in central Stockholm, Sweden, on January 14, 2021. Serving alcohol at restaurants after 8 pm is not allowed until January 25, and a maximum of four guests are allowed to sit together. (Photo by Carl-Olof Zimmerman/TT News Agency/AFP Photo) 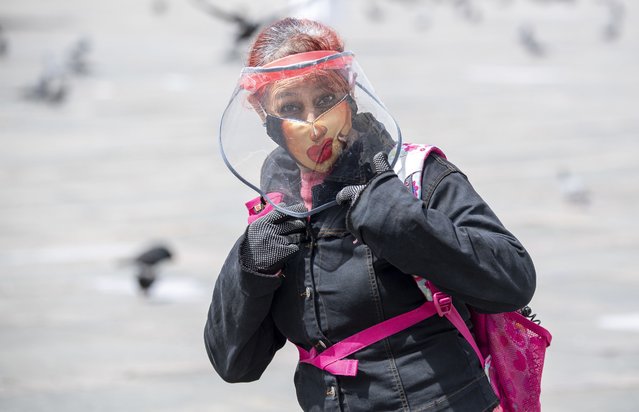 A woman wears a face mask and shield in Bogota on January 26, 2021, amid the new coronavirus pandemic. (Photo by Juan Barreto/AFP Photo) 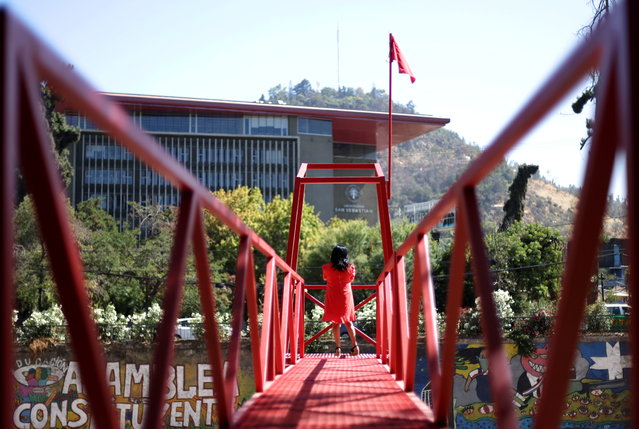 A woman stands at an urban intervention by chilean artist Ivan Navarro called “Rio de sangre” (Blood river), a tribute to the coronavirus disease (COVID-19) victims and in memory of the people that were thrown into the river before and during the Chilean dictatorship, during Santiago a Mil International Theatre Festival in Santiago, Chile, January 12, 2021. (Photo by Ivan Alvarado/Reuters) 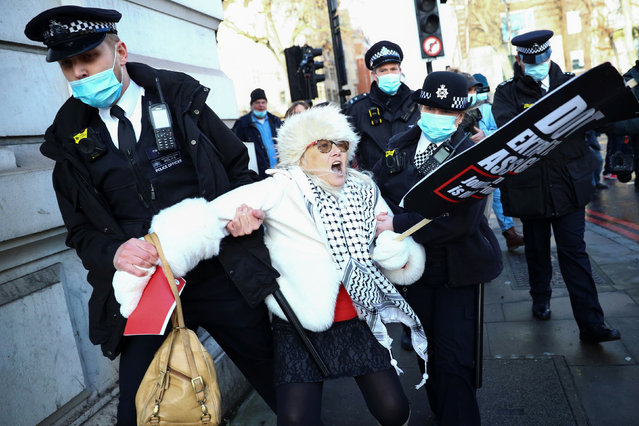 Police officers detain a woman holding a placard outside the Westminster Magistrates Court as Julian Assange's lawyers seek bail for their client in London, Britain on January 6, 2021. (Photo by Hannah McKay/Reuters) 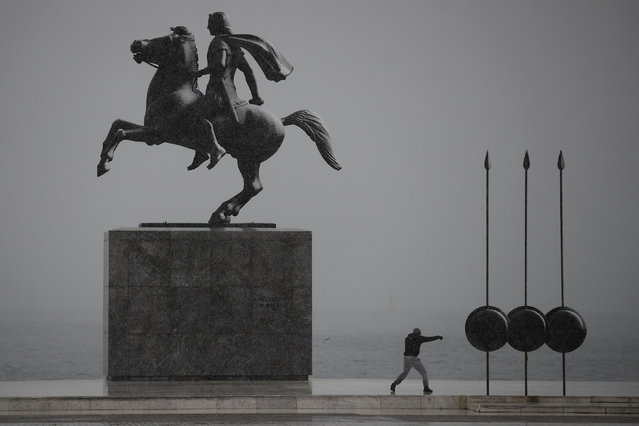 A man exercises in a snowy landscape near the statue of Alexander the Great at the seafront of Thessaloniki, Greece, 16 January 2021. (Photo by Dimitris Tosidis/EPA/EFE) 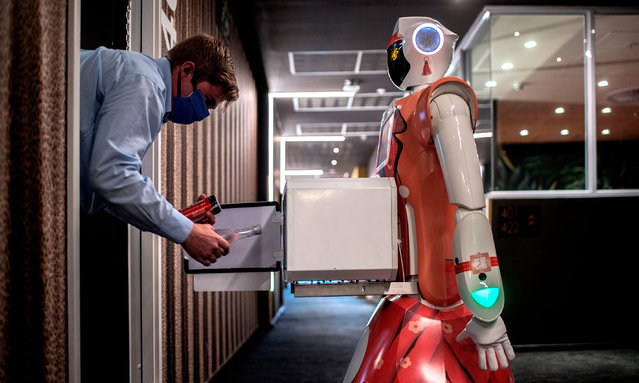 A technician by CTRL Robotics company performs a test of room service function of a robot in the Sky Hotel in Sandton, South Africa, on January 29, 2021. (Photo by Luca Sola/AFP Photo) 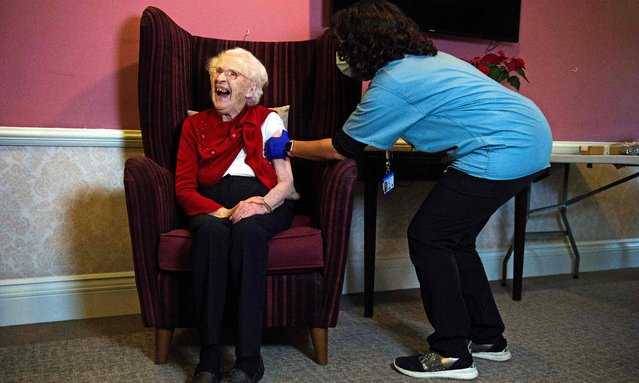 One hundred year-old Ellen Prosser, known as Nell, receives the Oxford/AstraZeneca COVID-19 vaccine from Dr Nikki Kanani at the Sunrise Care Home in Sidcup, south east London on January 7, 2021. A mass rollout by GP practices of the Oxford/AstraZeneca Covid-19 vaccine has begun, as hospitals across the United Kingdom face rising numbers of seriously ill patients. (Photo by Kirsty O'Connor/Pool via AFP Photo) 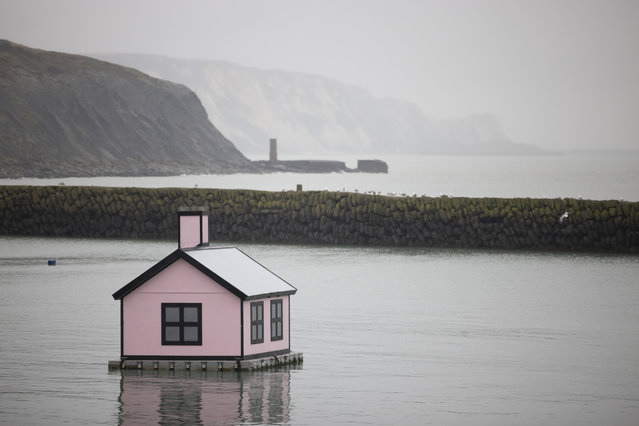 Artwork by Richard Woods in the harbor on January 13, 2021 in Folkestone, United Kingdom. On Monday January 4th England entered its third lockdown due to the Coronavirus pandemic. Schools and colleges moved to online learning, mixing with people outside households and bubbles was curtailed and non-essential food shops closed. (Photo by Dan Kitwood/Getty Images) 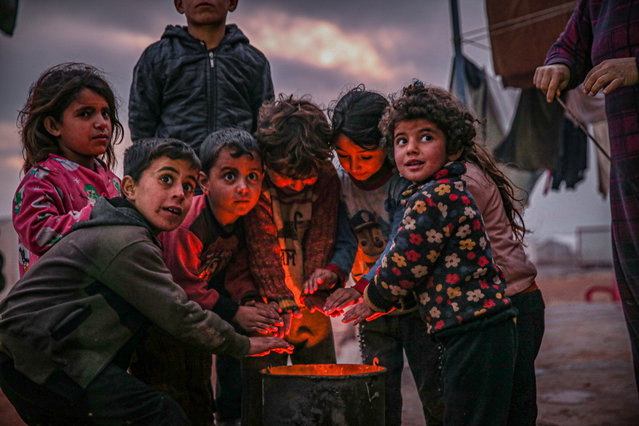 Syrian kids try to get warm around fire near their makeshift tentas rain and cold weather, which was effective tents in Kafr Lusin district where infrastructure services were insufficient, made the lives of the residents difficult during winter season in northern Idlib, Syria on January 31, 2021. (Photo by Muhammed Said/Anadolu Agency via Getty Images) 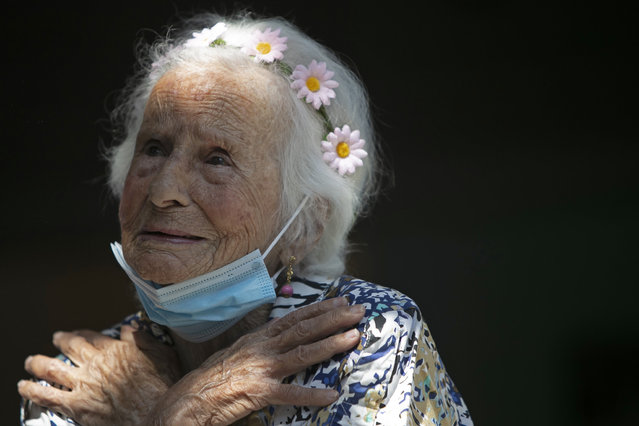 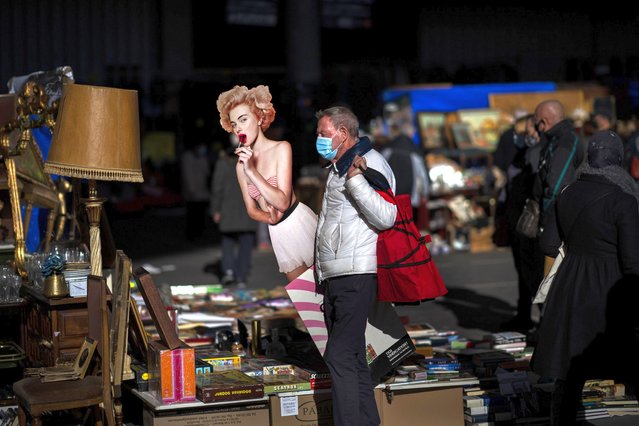 A man wearing a face mask carries an advert showing a photo of a woman after buying it at a second hand market in Barcelona, Spain, Wednesday, January 27, 2021. With nearly 2.5 million infections and 55,400 deaths for COVID-19 since the beginning of the pandemic, Spain ranks among the worst-hit countries by the coronavirus in Europe. (Photo by Emilio Morenatti/AP Photo) 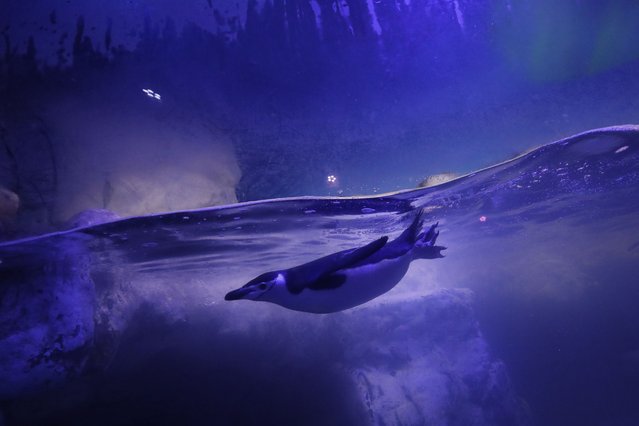 A penguin swims in an enclosure housing gentoo and chinstrap penguins at Mexico City's Inbursa Aquarium on January 13, 2021. (Photo by Rebecca Blackwell/AP Photo) 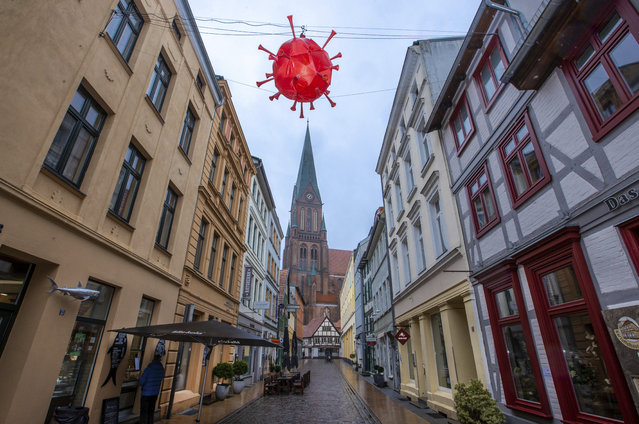 A homemade, luminous representation of the coronavirus hangs above a shopping street in front of the tower of Schwerin Cathedral during the lockdown in Schwerin, Germany, Tuesday, January 5, 2021. A local fishmonger in the almost deserted street built and hung the lantern in the image of the virus. The German Chancellor and the Minister Presidents of the federal states discuss an extension of the lockdown to contain the corona pandemic. (Photo by Jens Buettner/dpa via AP Photo) 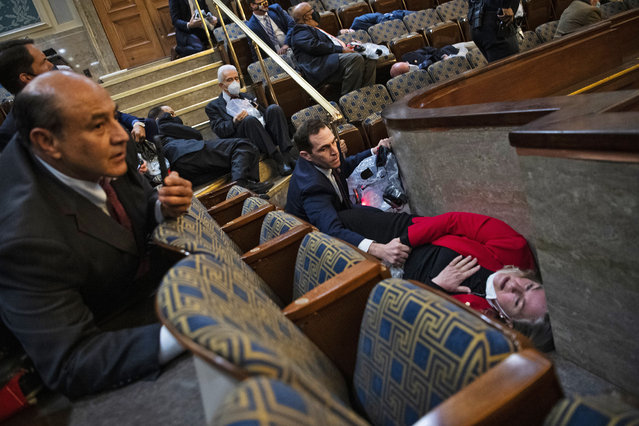 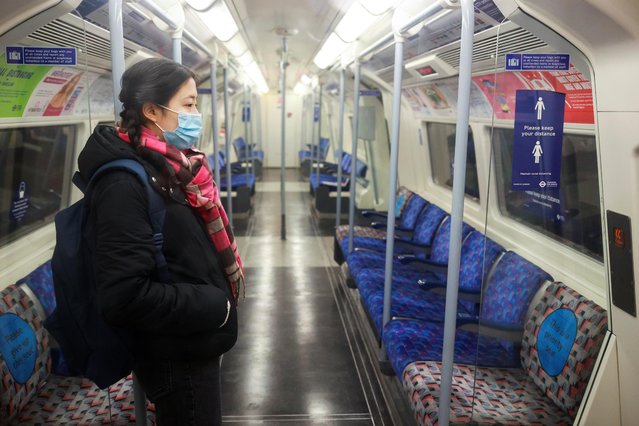 A woman stand inside an almost deserted underground train, amid the coronavirus disease (COVID-19) outbreak, in London, Britain, January 5, 2021. (Photo by Hannah McKay/Reuters) 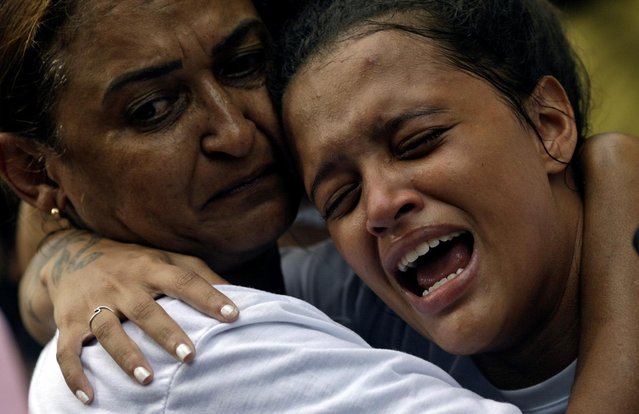 Vitoria, daughter of Marcelo Guimaraes, who according to residents was shot to death by police in an armored vehicle while riding a motorcycle next to Cidade de Deus slum, mourns during his burial in Rio de Janeiro, Brazil on January 5, 2021. (Photo by Ricardo Moraes/Reuters) 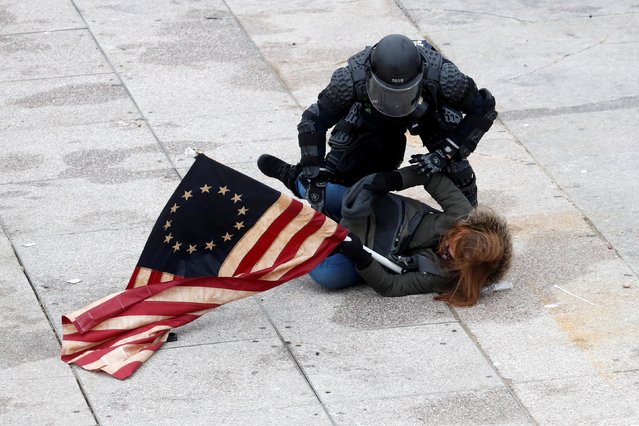 A police officer detains a pro-Trump protester as mobs storm the U.S. Capitol, during a rally to contest the certification of the 2020 U.S. presidential election results by the U.S. Congress, at the U.S. Capitol Building in Washington, U.S, January 6, 2021. (Photo by Shannon Stapleton/Reuters) 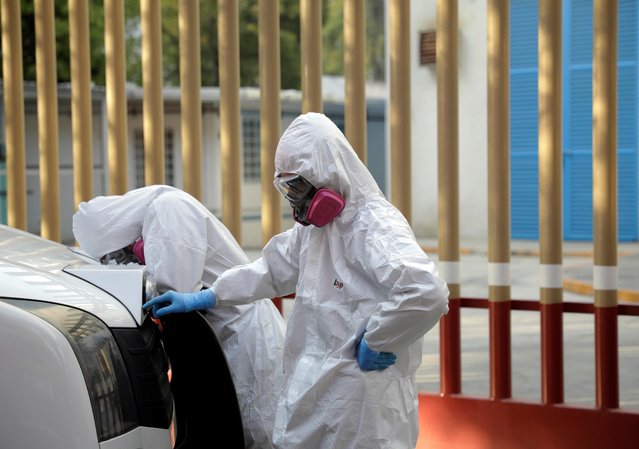 Paramedics wait outside the General Hospital for an available hospital bed for their patient showing symptoms of the coronavirus to be admitted, in Mexico City, January 7, 2021. Surging COVID cases and deaths in Mexico City are pushing hospitals and healthcare workers to the brink. (Photo by Luis Cortes/Reuters)
Edit Del
06 Jan 2022 07:24:00, post received 0 comments
Publication archive:
←   →
Popular tags:
All tags
Last searches: