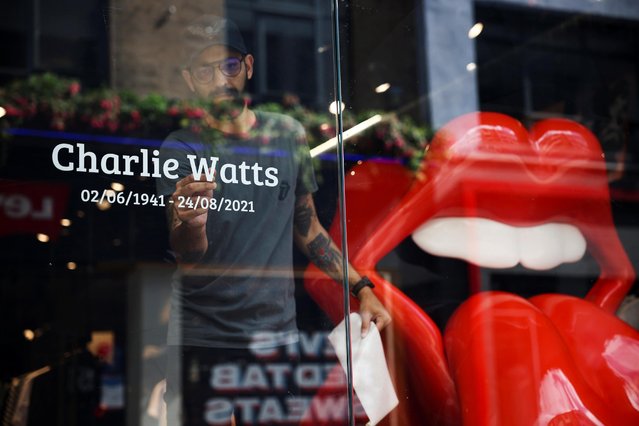 An employee of RS No. 9 Carnaby, a Rolling Stones branded shop, places a tribute to Rolling Stones drummer Charlie Watts on the window of the store following the death of the drummer, in London, Britain, August 25 2021. (Photo by Henry Nicholls/Reuters) 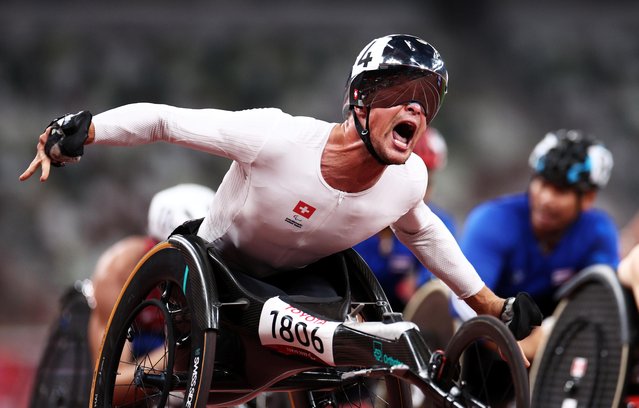 Marcel Hug of Team Switzerland celebrates after winning gold in the Men’s 5000m - T54 Final on day 4 of the Tokyo 2020 Paralympic Games at Olympic Stadium on August 28, 2021 in Tokyo, Japan. (Photo by Lisi Niesner/Reuters) 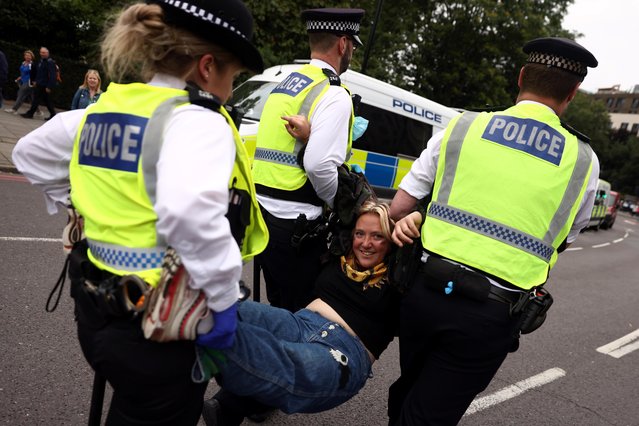 Police officers remove an Extinction Rebellion climate demonstrator from the roadblock by Tower Bridge during a protest in London, Britain, August 30, 2021. (Photo by Tom Nicholson/Reuters) 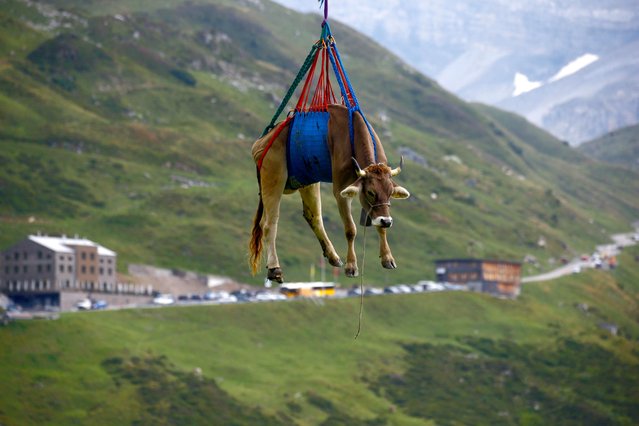 A cow is transported by a helicopter after its summer sojourn in the high Swiss Alpine meadows near the Klausenpass, Switzerland on August 27, 2021. (Photo by Arnd Wiegmann/Reuters) 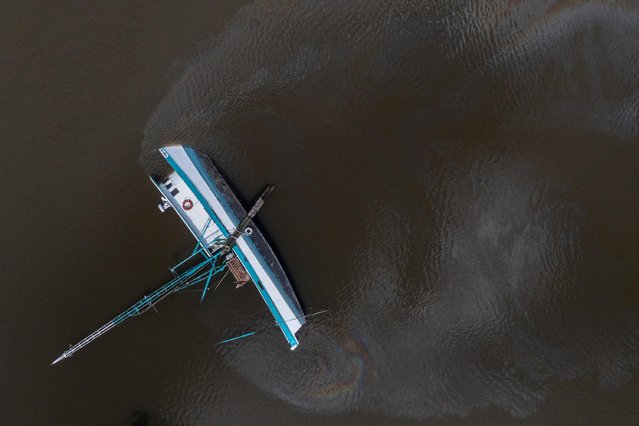 Fuel leaks from a capsized boat along Bayou Lafourche in the aftermath of Hurricane Ida in Galliano, Louisiana, U.S., August 31, 2021. Picture taken with a drone. (Photo by Adrees Latif/Reuters) 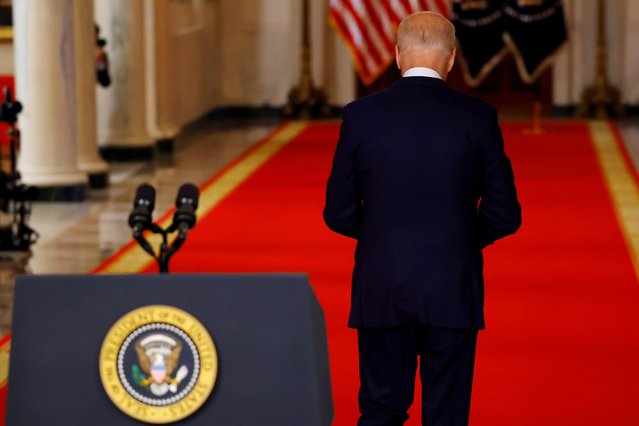 U.S. President Joe Biden departs after delivering remarks on Afghanistan during a speech in the State Dining Room at the White House in Washington, U.S., August 31, 2021. (Photo by Carlos Barria/Reuters) 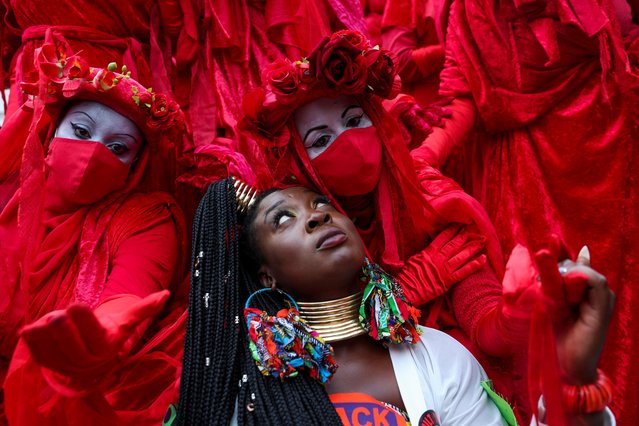 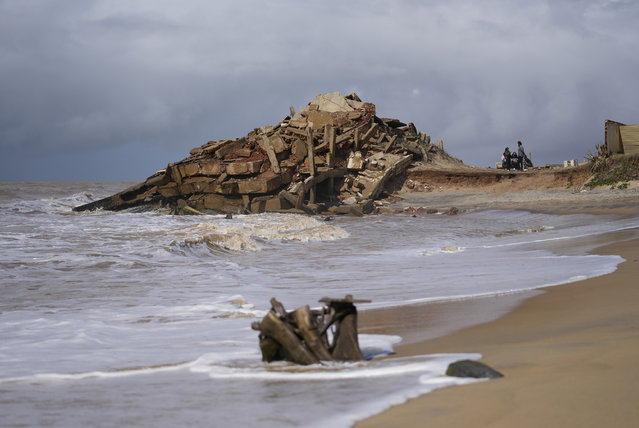 The ruins of the Predio do Julinho hotel, that collapsed in 2008 due encroachment by the sea, lay on the beachfront in Atafona, Rio de Janeiro state, Brazil, Tuesday, August 17, 2021. The hotel is among more than 500 other building that have fallen victim to the encroaching Atlantic Ocean, so far. (Photo by Silvia Izquierdo/AP Photo) 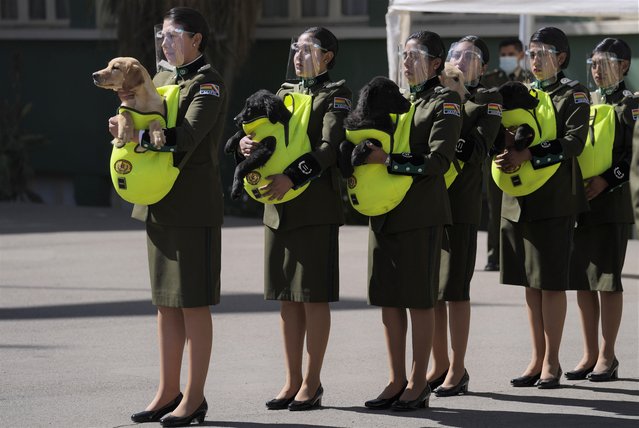 Police officers introduce a litter of golden retriever puppies to be trained as police dogs during a ceremony at the National Police Academy in La Paz, Bolivia, Monday, August 16, 2021, the date of the feast day for Saint Roch, considered the patron saint of dogs, among other things. (Photo by Juan Karita/AP Photo) 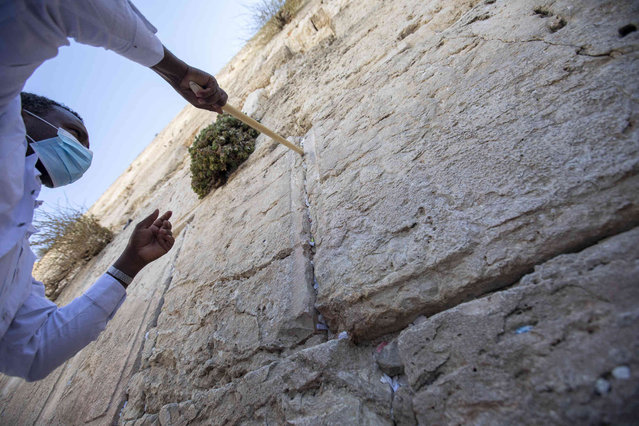 A worker removes prayer notes left by visitors in gaps between stones at the Western Wall, the holiest site where Jews can pray in Jerusalem's old city, ahead of Rosh Hashana, the Jewish new year, Wednesday, August 25, 2021. The notes are buried in a nearby cemetery according to Jewish tradition. (Photo by Ariel Schalit/AP Photo) 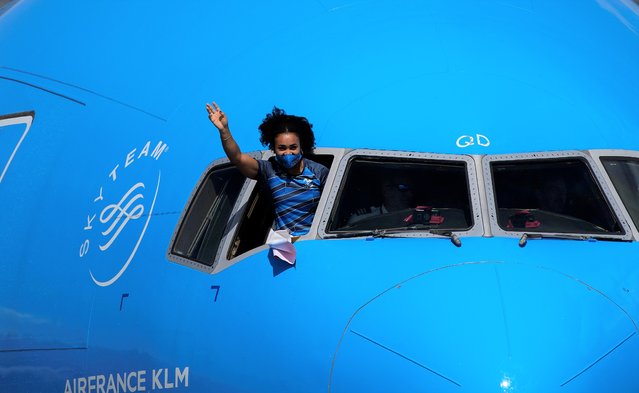 Olympian athlete Neisi Dajomes Barrera, who won the gold in women's weightlifting 76kg at the 2020 Tokyo Olympics, waves from the cockpit of a plane as she arrives to Quito, Ecuador, Wednesday, August 4, 2021. Dajomes Barrera is the first woman from Ecuador to win a gold medal at an Olympics. (Photo by Dolores Ochoa/AP Photo) 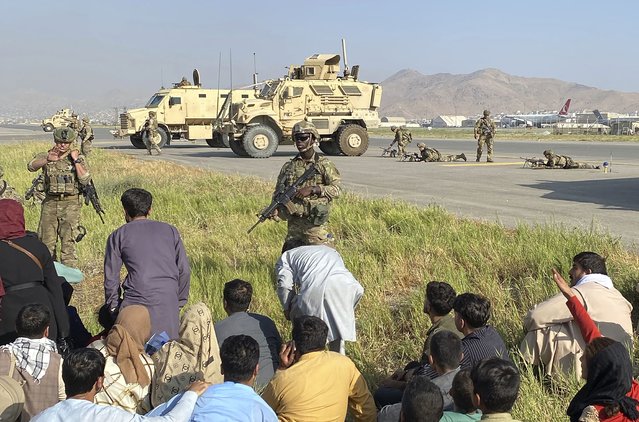 U.S soldiers stand guard along a perimeter at the international airport in Kabul, Afghanistan, Monday, August 16, 2021. On Monday, the U.S. military and officials focus was on Kabul's airport, where thousands of Afghans trapped by the sudden Taliban takeover rushed the tarmac and clung to U.S. military planes deployed to fly out staffers of the U.S. Embassy, which shut down Sunday, and others. (Photo by Shekib Rahmani/AP Photo) 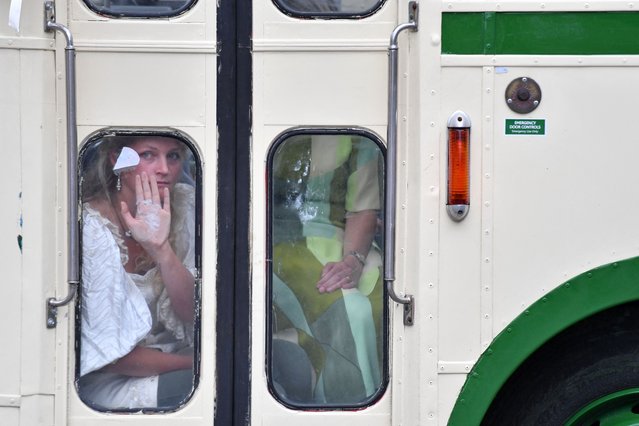 A protester shows her glued palm against a window, as police officers surround a vehicle parked across the road by climate activists from the Extinction Rebellion group, blocking the road over London Bridge in central London on August 31, 2021 during the group's “Impossible Rebellion” series of actions. Climate change demonstrators from environmental activist group Extinction Rebellion continued with their latest round of protests in central London, promising two weeks of disruption. (Photo by Justin Tallis/AFP Photo) 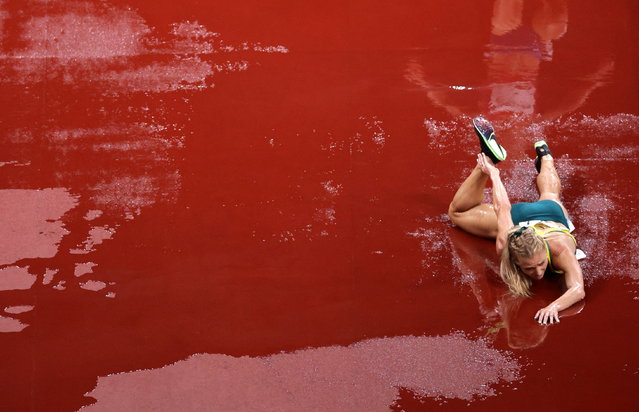 Australia's Genevieve Gregson gets injured during the women's 3000m steeplechase final during the Tokyo 2020 Olympic Games at the Olympic Stadium in Tokyo on August 4, 2021. (Photo by Hannah Mckay/Reuters) 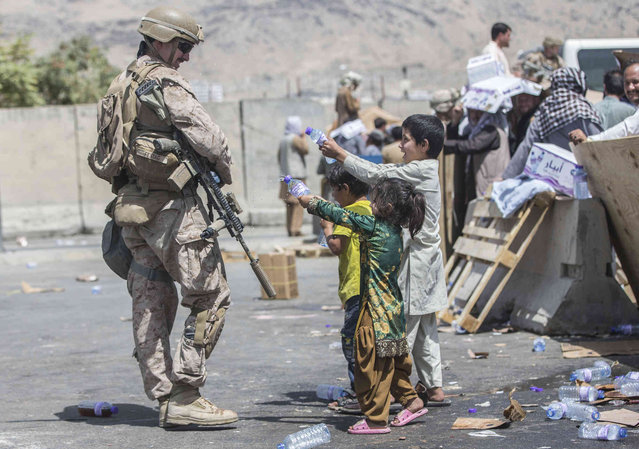 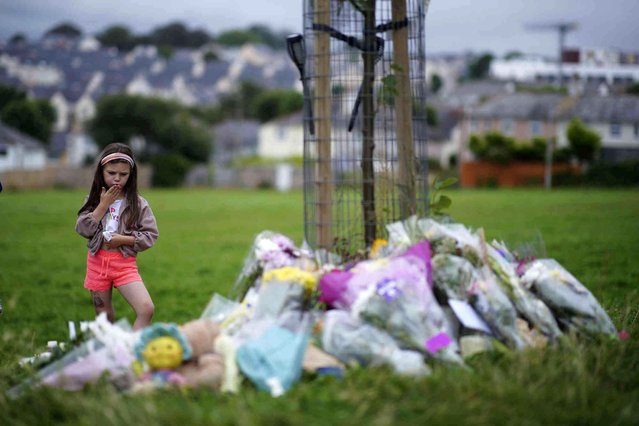 A young girl blows a kiss as she looks at floral tributes at the scene of a shooting in the Keyham area of Plymouth, England, Saturday, August 14, 2021. Britain’s police watchdog says it has launched an investigation into why a 22-year-old man who fatally shot five people in southwestern England was given back his confiscated gun and gun license. Police have said Jake Davison killed his mother and four other people, including a 3-year-old girl, before taking his own life in Plymouth. (Photo by Ben Birchall/PA Wire via AP Photo) 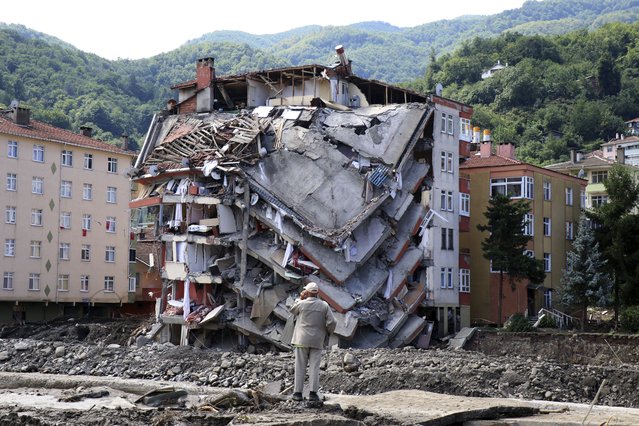 A man looks at destroyed building, in Bozkurt town of Kastamonu province, Turkey, Saturday, August 14, 2021. The death toll from severe floods and mudslides in coastal Turkey has climbed to at least 44, the country's emergency and disaster agency said Saturday. Torrential rains that pounded the Black Sea provinces of Bartin, Kastamonu and Sinop on Wednesday caused flooding that demolished homes, severed at least five bridges, swept away cars and rendered numerous roads unpassable. (Photo by AP Photo/Stringer) 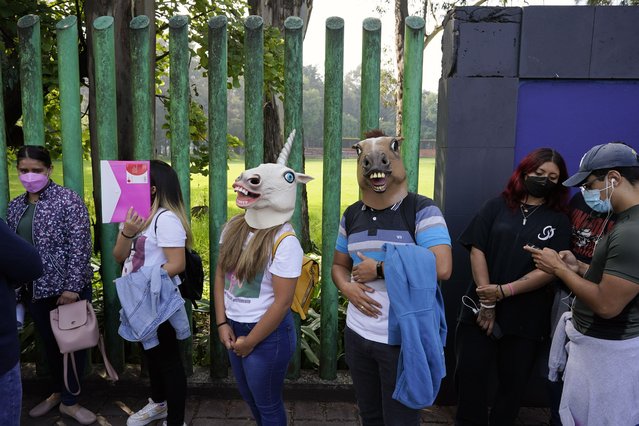 Youths, some wearing masks, wait in line to be vaccinated with the Pfizer vaccine for COVID-19 during a vaccination campaign for people between ages18-29 in Mexico City, Thursday, August 19, 2021. Xochimilco encouraged youths to arrive in costumes and compete for prizes if they were coming for their first shot. (Photo by Eduardo Verdugo/AP Photo) 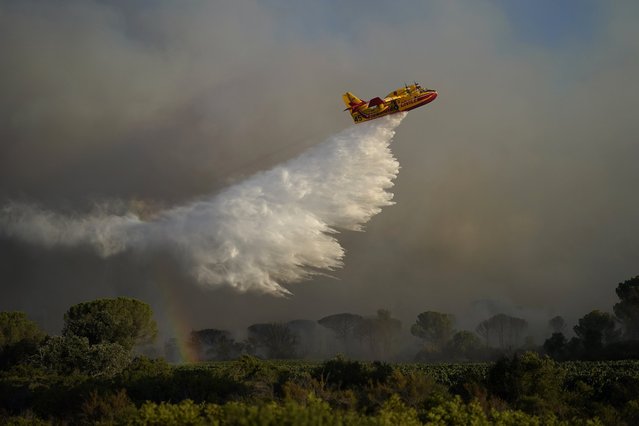 A water-dumping aircraft dumps water on a wildfire near Le Luc, southern France, Tuesday, August 17, 2021. Thousands of people fled homes, campgrounds and hotels near the French Riviera on Tuesday as firefighters battled a blaze that raced through nearby forests, sending smoke pouring down wooded slopes toward vineyards in the picturesque area. (Photo by Daniel Cole/AP Photo) 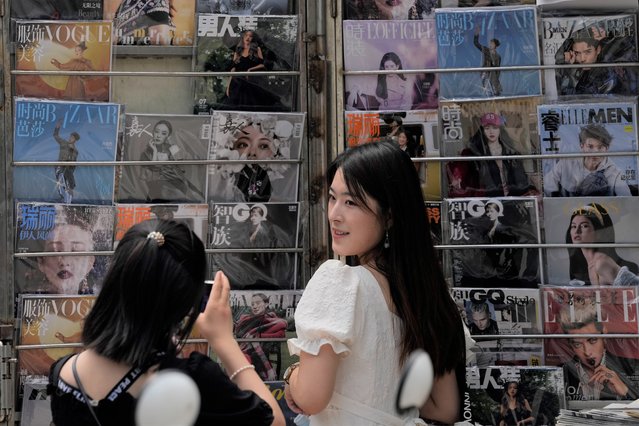 A woman poses for a photo near magazines showing celebrities at a newsstand in Beijing on August 1, 2021. Hugely popular online games and celebrity culture are the latest targets in the ruling Communist Party's campaign to encourage China's public to align their lives with its political and economic goals. (Photo by Ng Han Guan/AP Photo)
Edit Del
21 Apr 2022 06:13:00, post received 0 comments
Publication archive:
←   →
Popular tags:
All tags
Last searches: