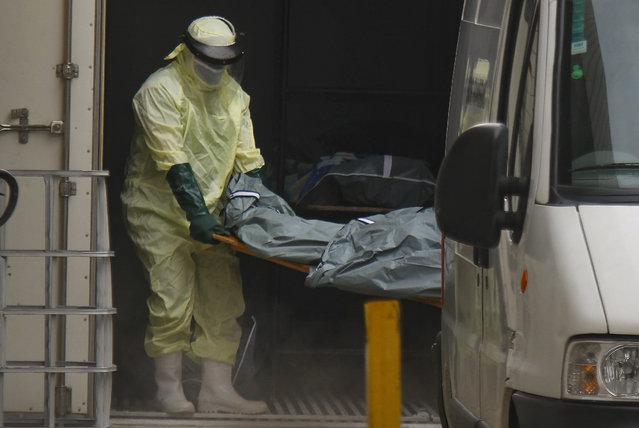 Health workers remove the body of a COVID-19 victim from a container, being used as a makeshift morgue, to turn over to a family outside the Joao Lucio public Hospital in Manaus, Amazonas state, Brazil, Monday, January 4, 2021. (Photo by Edmar Barros/AP Photo) 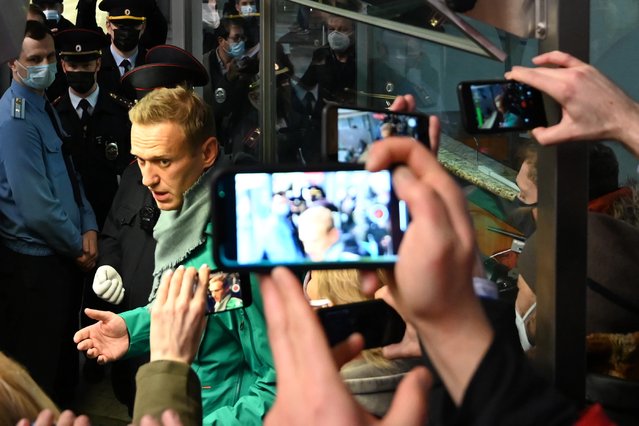 Russian opposition leader Alexei Navalny is seen at the passport control point at Moscow's Sheremetyevo airport on January 17, 2021. Russian police detained Kremlin critic Alexei Navalny at a Moscow airport shortly after he landed on a flight from Berlin, an AFP journalist at the scene said. (Photo by Kirill Kudryavtsev/AFP Photo) 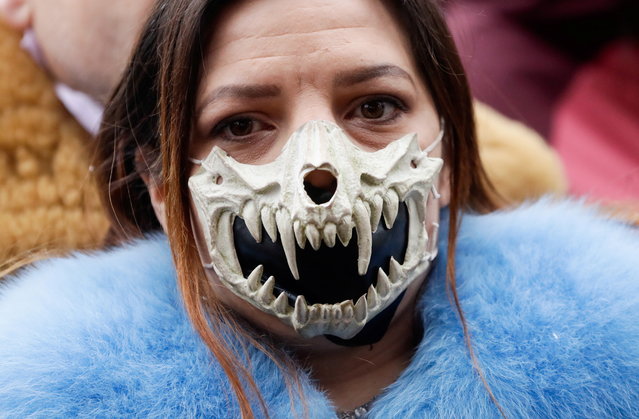 A demonstrator wears a mask during a protest against the Czech government's restrictions, as the spread of the coronavirus disease (COVID-19) continues, at the Old Town Square in Prague, Czech Republic on January 10, 2021. (Photo by David W. Cerny/Reuters) 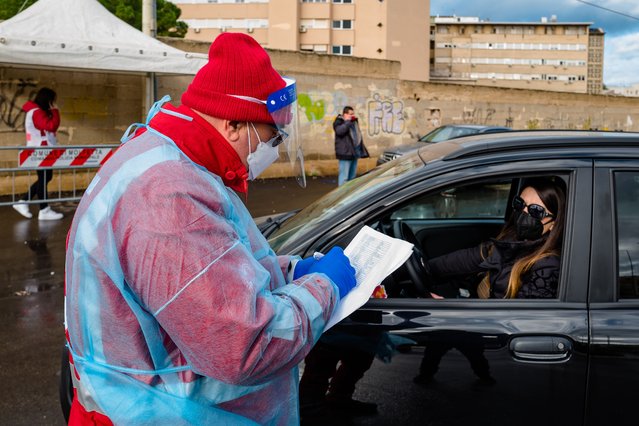 A Croce Rossa volunteer checks the name of the patient who has to carry out the swab in the car, at the Hospital of Molfetta on January 2, 2021. From 9 November, at the Molfetta hospital, the drive through station (on board the car) is always active for swabs with the collaboration of volunteers who facilitate and order the traffic of cars with positive patients or patients who have have already been quarantined at home and are waiting for the last swab which certifies recovery from the virus. With the increase in the number of Covid-19 cases, waiting times for those who need to carry out swabs have significantly reduced. (Photo by Davide Pischettola/NurPhoto via Getty Images) 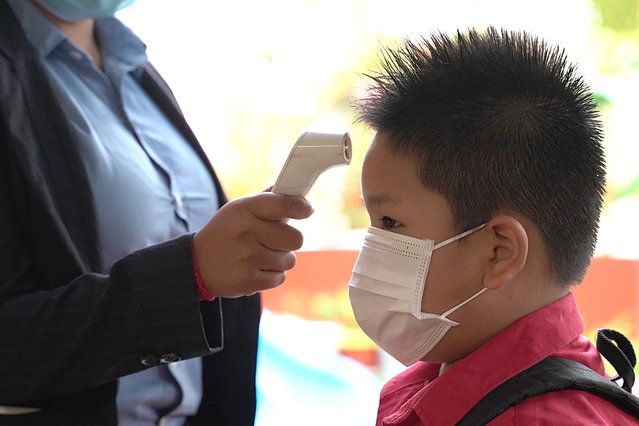 A student from the Sovannaphumi school wearing a face mask has his temperature checked as Cambodia reopen schools and museums after months of shutdown due to surging of the coronavirus disease (COVID-19) in Phnom Penh, Cambodia, January 4, 2021. (Photo by Cindy Liu/Reuters) 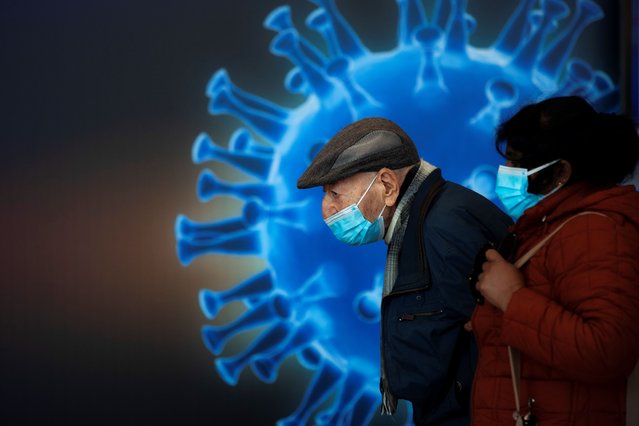 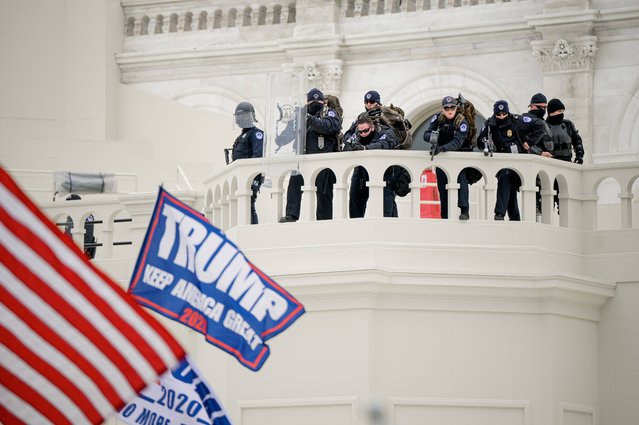 Police keep a watch on demonstrators who tried to break through a police barrier, Wednesday, January 6, 2021, at the Capitol in Washington. (Photo by Joel Marklund/Imago) 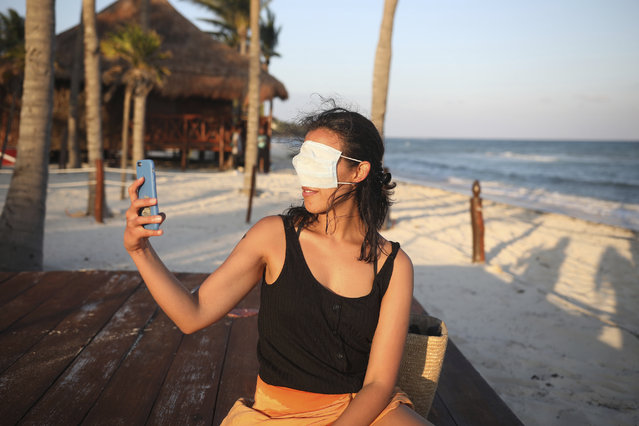 Mexico City resident Romina Montoya takes a playful selfie wearing a protective face mask over her eyes and nose, in Playa del Carmen, Quintana Roo state, Mexico, Wednesday, January 6, 2021. Concern is spreading that the critical winter holiday tourism success could be fleeting because it came as COVID-19 infections in both Mexico and the United States were reaching new heights. (Photo by Emilio Espejel/AP Photo) 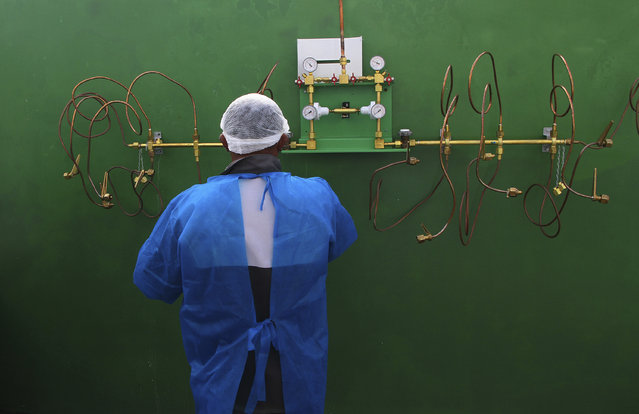 A health worker stands in front of an empty oxygen tank station, the only station at Joventina Dias Hospital, a small clinic in Manaus, Brazil, Friday, January 15, 2021. Hospital staff and relatives of COVID-19 patients rushed to provide facilities with oxygen tanks just flown into the city as doctors chose which patients would breathe amid dwindling stocks and an effort to airlift some of them to other states. (Photo by Edmar Barros/AP Photo) 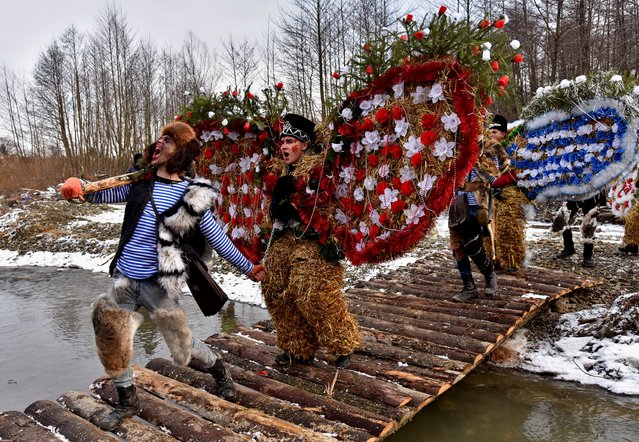 Local residents dressed in costumes perform during celebrations for Malanka traditional holiday, which is celebrated on the day of St. Basil and St. Melania, in the settlement of Krasnoilsk in Chernivtsi Region, Ukraine January 14, 2021. During the celebrations youngsters and adults wear traditional, carnival costumes, masks and visit local houses while singing carols, playing pranks or performing short plays. (Photo by Pavlo Palamarchuk/Reuters) 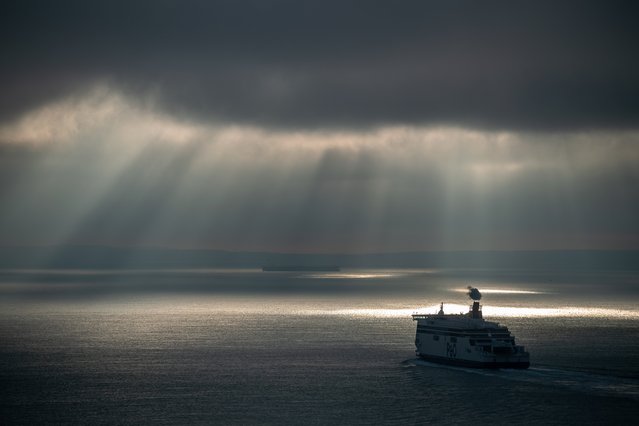 The first boats and ferries depart the port of Dover on January 1, 2021 in Dover, United Kingdom. Lorry drivers turned up to the port this morning for some of the first boats to leave the United Kingdom since the countrys official departure from the European Union. January 1st 2021 marks the first day of the UK's future outside the European Union. (Photo by Chris J. Ratcliffe/Getty Images) 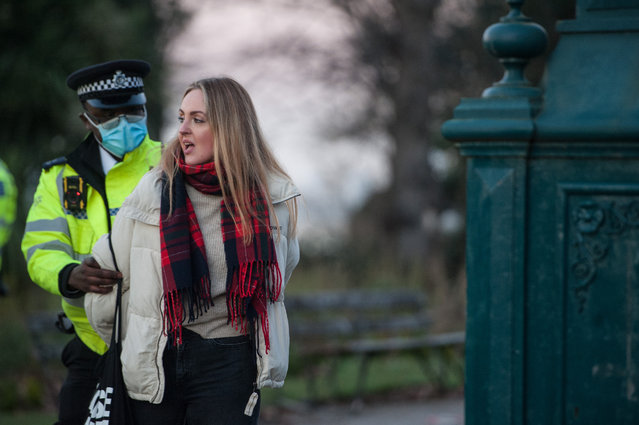 Police detain several anti lockdown protestors in Brockwell park Brixton whom had initially gathered near Windrush square before heading into the park on January 9, 2021 in London, England. Chief Medical Officer Chris Whitty has filmed an advert for HM Government warning that people should stay home as the COVID-19 virus is spreading across the country. Despite these warnings the protest group StandUpX are demonstrating against coronavirus lockdown measures and vaccines. ( Photo by Guy Smallman/Getty Images) 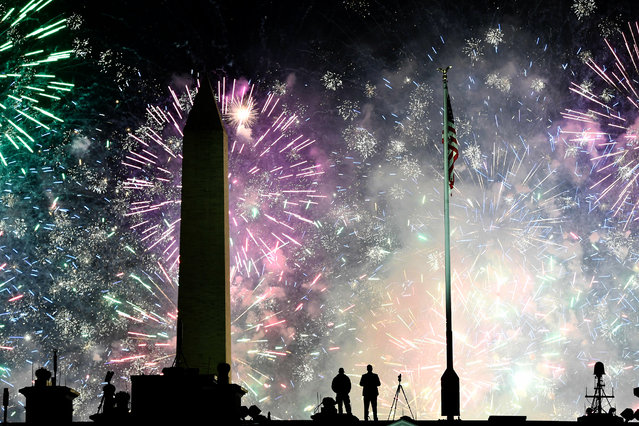 Fireworks are seen above the White House at the end of the Inauguration day for US President Joe Biden in Washington, DC, on January 20, 2021. (Photo by Patrick T. Fallon/AFP Photo) 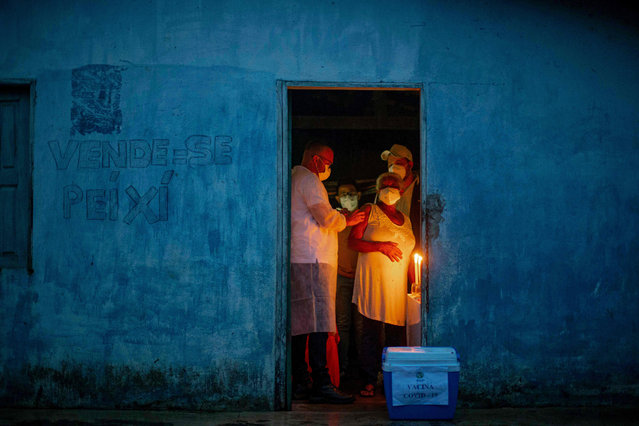 Health professional Raimunda Nonata, 70, is inoculated with the Sinovac Biotech's CoronaVac vaccine against COVID-19 inside her house becoming the first Quilombola (traditional Afro-descendent community member) to be vaccinated at the community Quilombo Marajupena, city of Cachoeira do Piria, Para state, Brazil, on January 19, 2021. The community of Quilombo Marajupena, 260km far-away from Belem, capital of Para, doesn't have access to electricity. (Photo by Tarso Sarraf/AFP Photo) 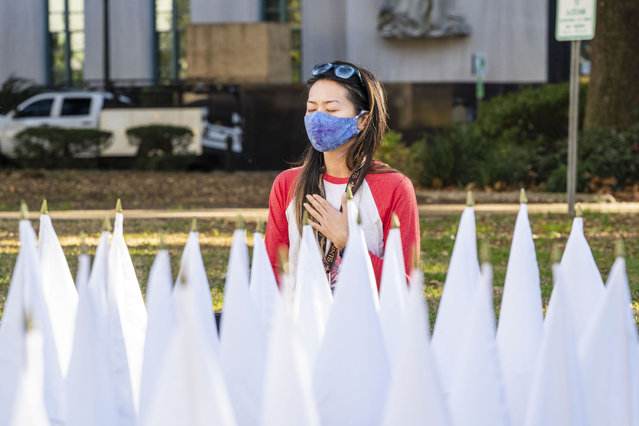 A woman visits the COVID-19 memorial in Lafayette Square on January 19, 2021 in New Orleans, Louisiana. The City placed white flags in the park to commemorate the nearly 700 New Orleanians lost to COVID-19. (Photo by Erika Goldring/Getty Images) 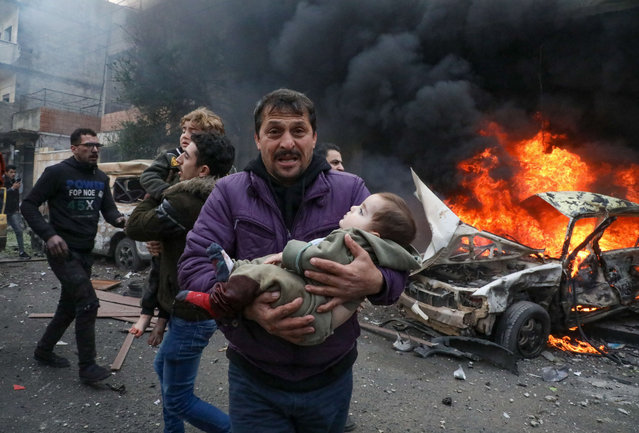 Civilians carry a young victim at the scene of an explosion in the town of Azaz in the rebel-controlled northern countryside of Syria's Aleppo province,on January 31, 2021. A car bomb killed at least four people, including three civilians, in the Turkish-held northern town of Azaz in war-torn Syria today, a war monitor said. The attack, which occurred near a cultural centre, also wounded more than 22 others, the Britain-based Syrian Observatory for Human Rights said. (Photo by Nayef Al-Aboud/AFP Photo) 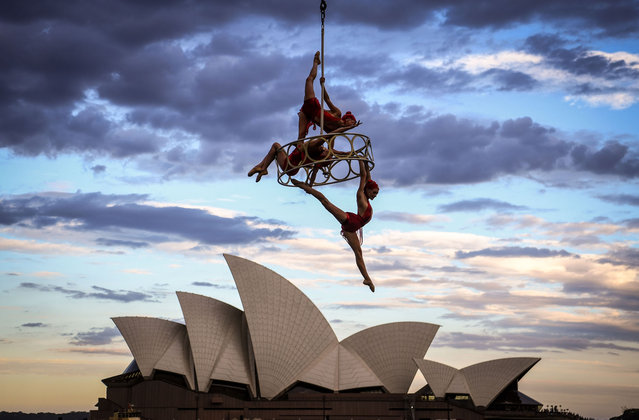 Trapeze performers hang from a cable in front of the Sydney Opera House as part of an Australia Day show titled the “Wedding of the Winds” on January 26, 2021 in Sydney, Australia. Australia Day, formerly known as Foundation Day, is the official national day of Australia and is celebrated annually on January 26 to commemorate the arrival of the First Fleet to Sydney in 1788. Indigenous Australians refer to the day as 'Invasion Day' and there is growing support to change the date to one which can be celebrated by all Australians. (Photo by James D. Morgan/Getty Images) 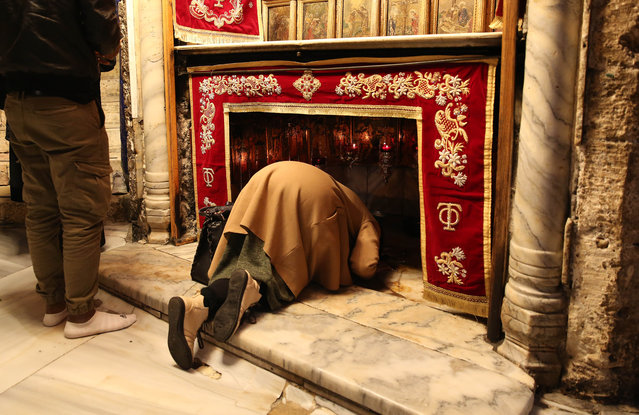 A faithful prays in the Church of the Nativity to attend Eastern Christmas celebrations in the West Bank city of Bethlehem, 06 January 2021. (Photo by Abed Al Hashlamoun/EPA/EFE) 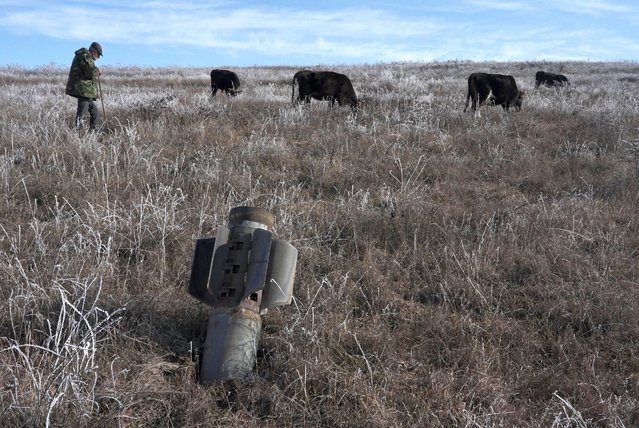 A man shepherds his cows near a rocket case left after a military conflict over Nagorno-Karabakh region, outside Stepanakert, Azerbaijan on January 6, 2021. (Photo by Artem Mikryukov/Reuters) 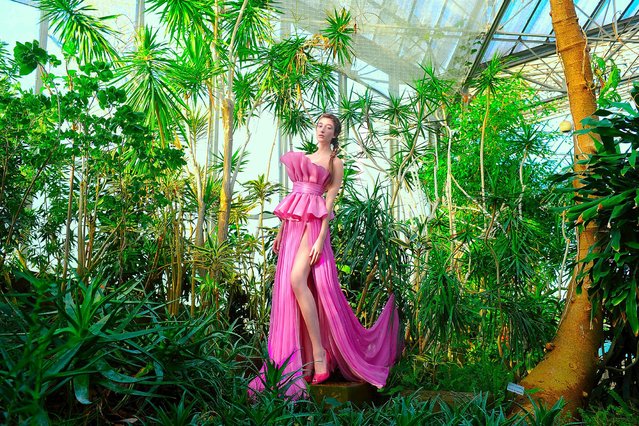