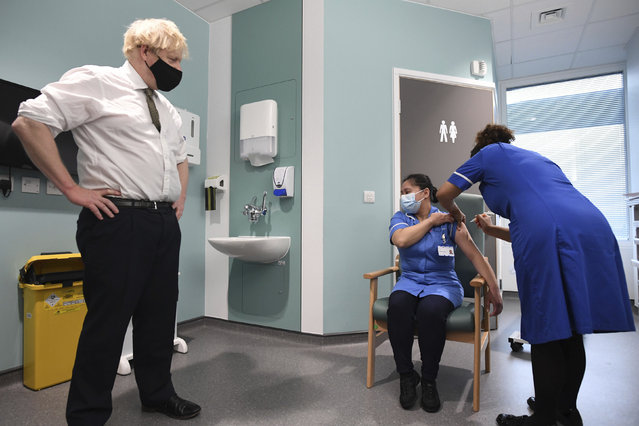 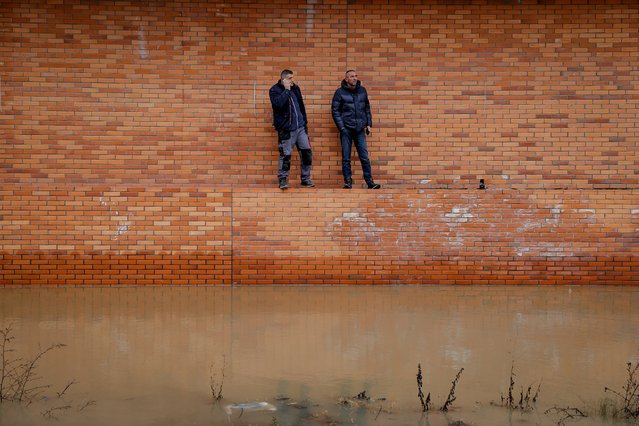 Local residents look on at flood water in the town of Fushe Kosove, Kosovo, 11 January 2021. Due to heavy rain showers many areas were flooded across Kosovo. (Photo by Valdrin Xhemaj/EPA/EFE) 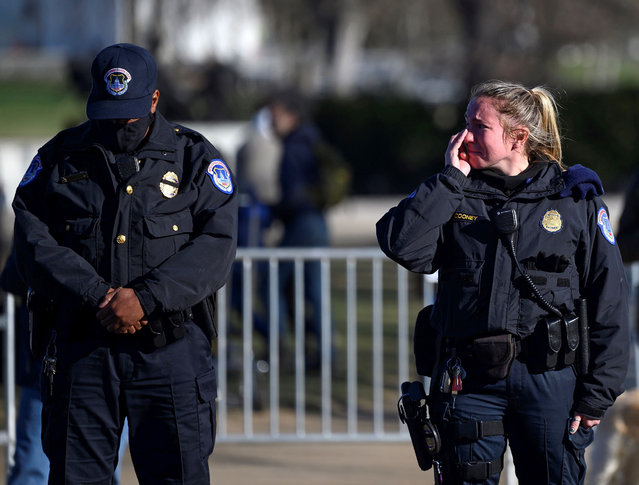 US Capital police react after the casket with fallen police officer, Brian Sicknick, passed during a funeral procession in Washington, DC on January 10, 2021. US Capitol Police officer Sicknick was reportedly struck in the head with a fire extinguisher on Wednesday while struggling with the rioters who swarmed through the halls of Congress and passed from his injuries. Donald Trump faced fresh calls Sunday from some members of his own party to resign over the violent incursion into the US Capitol, as the threat builds for a historic second impeachment effort in his final 10 days in the White House. (Photo by Andrew Caballero-Reynolds/AFP Photo) 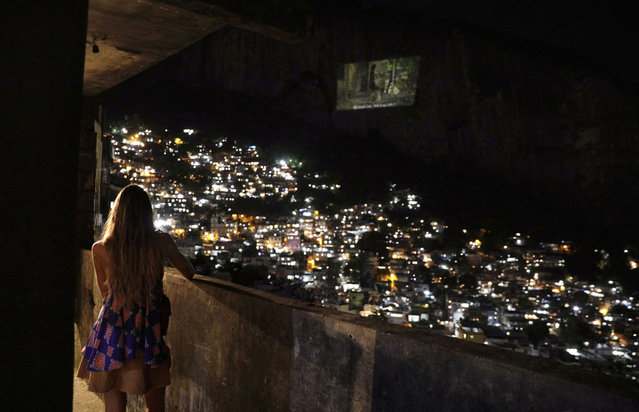 A woman watches a movie during the Projeta Rocinha cultural project which projects movies, music clips and a health campaign on the rocks of Dois Irmaos mountain atop Rocinha slum amid the coronavirus disease (COVID-19) outbreak, in Rio de Janeiro, Brazil on January 24, 2021. (Photo by Ricardo Moraes/Reuters) 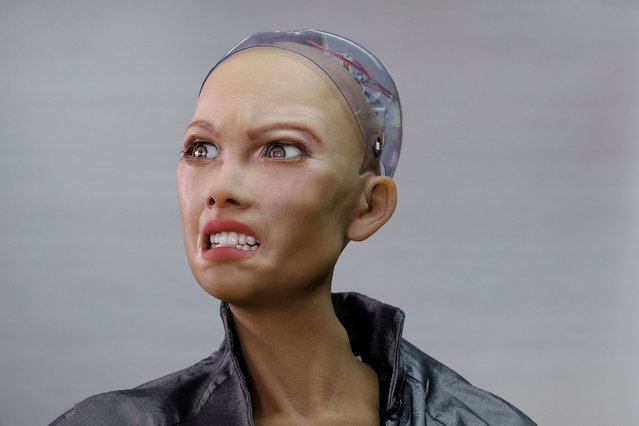 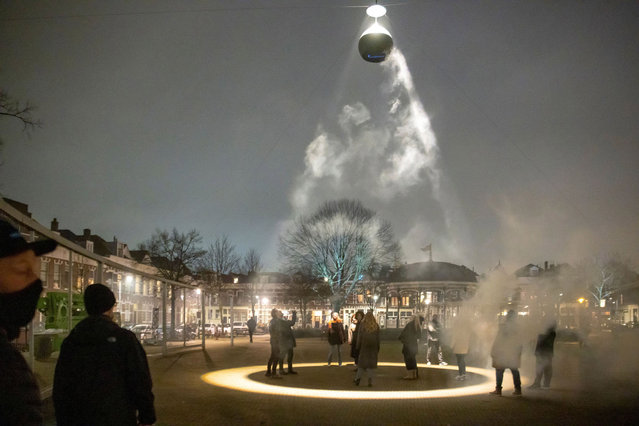 The Urban Sun, an art project launched by Dutch designer Daan Roosegaarde is seen on a square in Rotterdam, amid the coronavirus disease (COVID-19) outbreak in the Netherlands on January 27, 2021. (Photo by Hilde Verweij/Reuters) 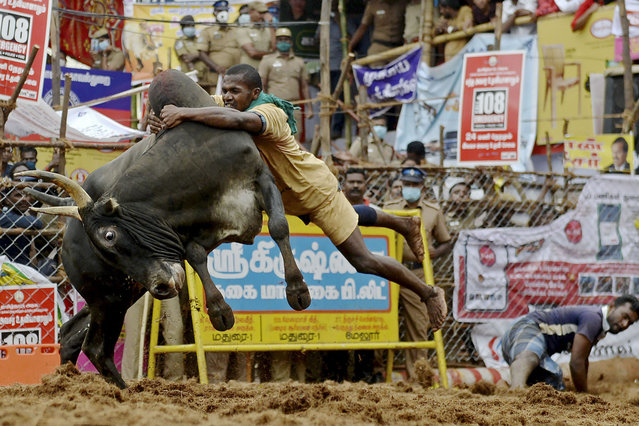 A participant tries to control a bull during an annual bull-taming festival “Jallikattu” in Palamedu village on the outskirts of Madurai on January 15, 2021. (Photo by Arun Sankar/AFP Photo) 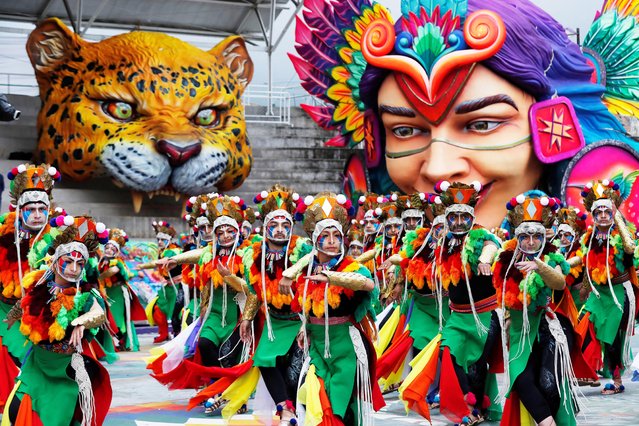 Artists and dancers perform during the virtual presentation of the traditional Great Day of the Carnival of Blacks and Whites, in Pasto, Colombia, 06 January 2021. The carnival, which is a Cultural and Intangible Heritage of Humanity, has not been held in the streets with the public because of the pandemic. With broadcasts on television and social networks, its organizers seek to preserve the tradition of the region. (Photo by Mauricio Duenas Castaneda/EPA/EFE) 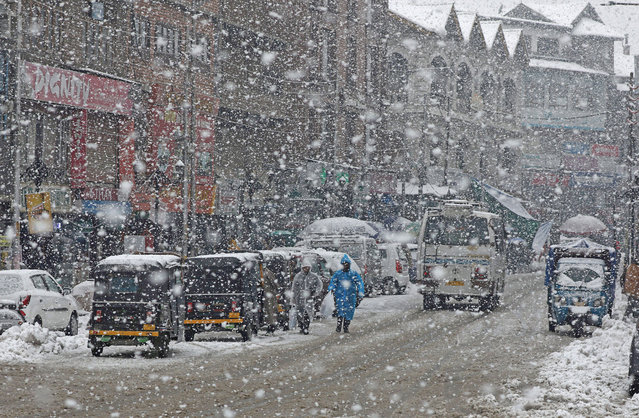 Motorists with their vehicles drive in fresh snowfall in Srinagar, the summer capital of Indian Kashmir, 04 January 2021. The plains and upper reaches of Indian Kashmir experienced moderate to heavy snowfall. Air flight operations at the Srinagar airport and the vehicular traffic on Srinagar-Jammu highway, the only link road connecting Indian Kashmir with rest of India has been suspended due to the heavy snowfalls, local media reported. (Photo by Farooq Khan/EPA/EFE) 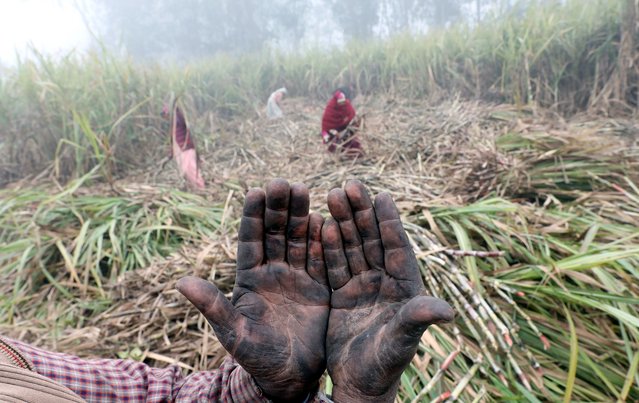 An Indian farmer showis his hands after days long work during the sugarcane harvesting in a village near the Moradabad district of Uttar Pradesh, India, 30 December 2020 (issued 04 January 2021). Uttar Pradesh is the main sugarcane-growing state in India, followed by Maharashtra, The sugarcane agriculture is an important sector in Indian economy because it provides raw material for sugar, alcohol, paper, chemicals and cattle feed with providing the employment and livelihood to millions of sugarcane growers across India. (Photo by Harish Tyagi/EPA/EFE) 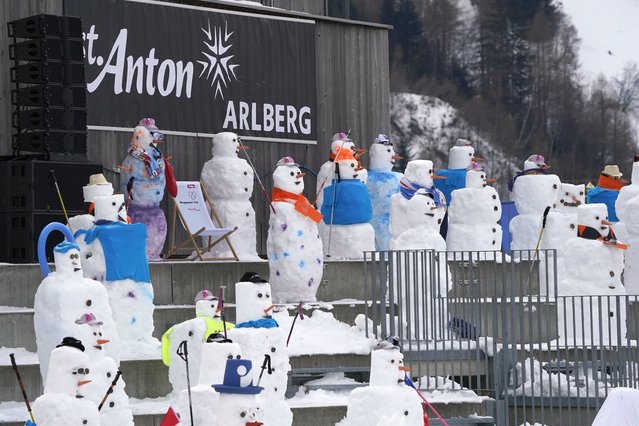 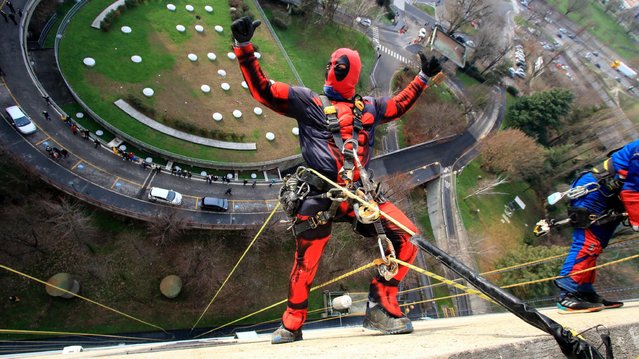 An acrobat dressed as Marvel's Deadpool rappels down the roof to greet the children of the pediatrics ward and the Covid-19 patients of the San Paolo Hospital, in Milan, Italy, 09 January 2021. (Photo by Paolo Salmoirago/EPA/EFE) 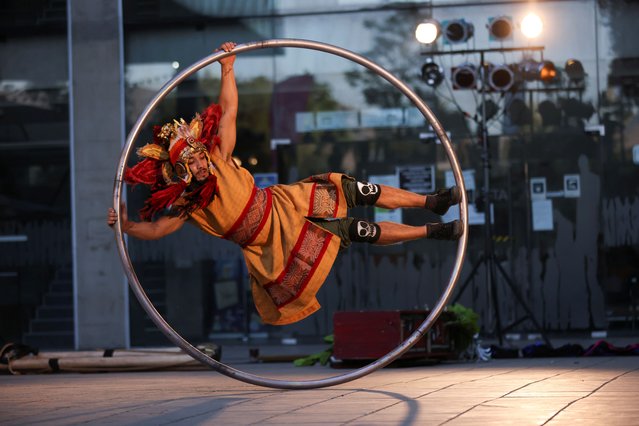 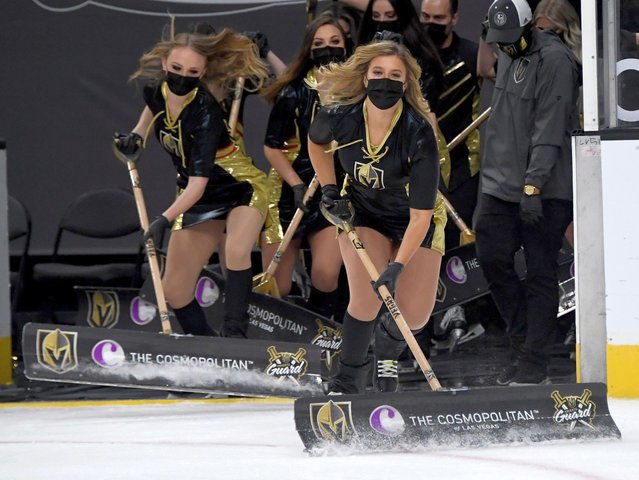 Members of the Knights Guard clean the ice during the Vegas Golden Knights' game against the Anaheim Ducks at T-Mobile Arena on January 14, 2021 in Las Vegas, Nevada. The Golden Knights defeated the Ducks 5-2. (Photo by Ethan Miller/Getty images/Profimedia) 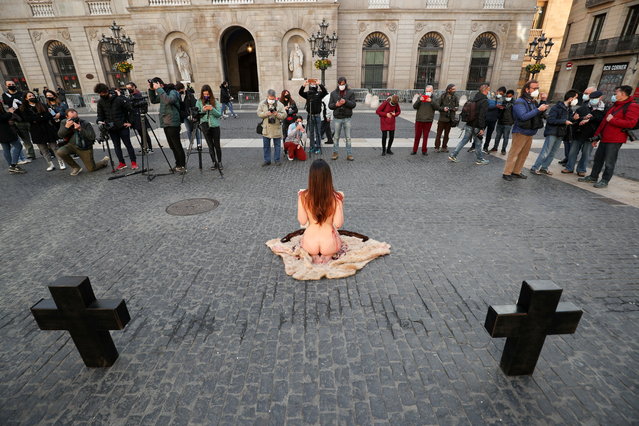 A naked animal rights activist performs during a protest against the use of fur and leather, at Sant Jaume Square in Barcelona, Spain on January 21, 2021. (Photo by Albert Gea/Reuters) 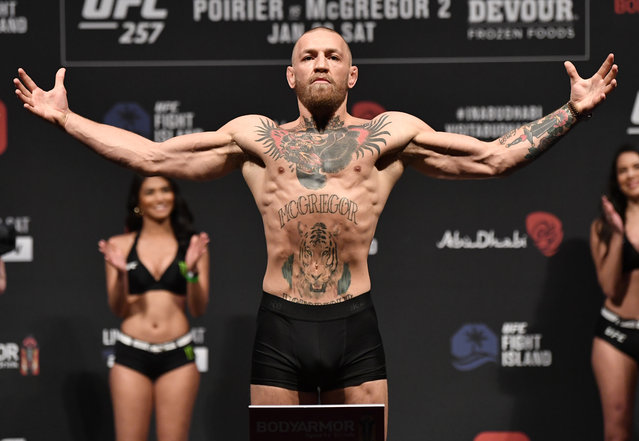 Conor McGregor of Ireland poses on the scale during the UFC 257 weigh-in at Etihad Arena on UFC Fight Island on January 22, 2021 in Abu Dhabi, United Arab Emirates. (Photo by Jeff Bottari/Handout Photo via USA TODAY Sports) 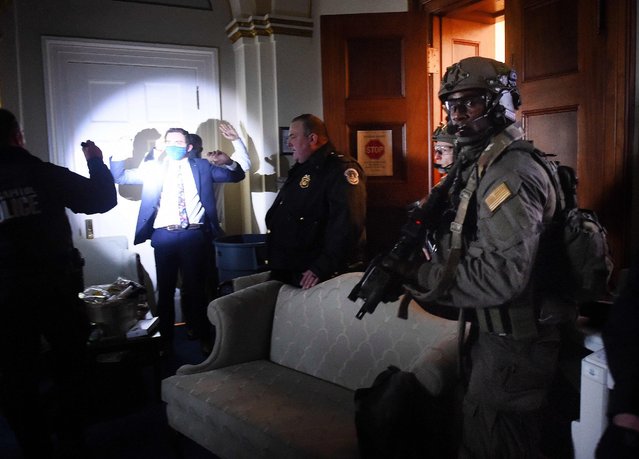 Congress staffers hold up their hands while Capitol Police Swat teams check everyone in the room as they secure the floor of Trump suporters in Washington, DC on January 6, 2021. Donald Trump's supporters stormed a session of Congress held today, January 6, to certify Joe Biden's election win, triggering unprecedented chaos and violence at the heart of American democracy and accusations the president was attempting a coup. (Photo by Olivier Douliery/AFP Photo) 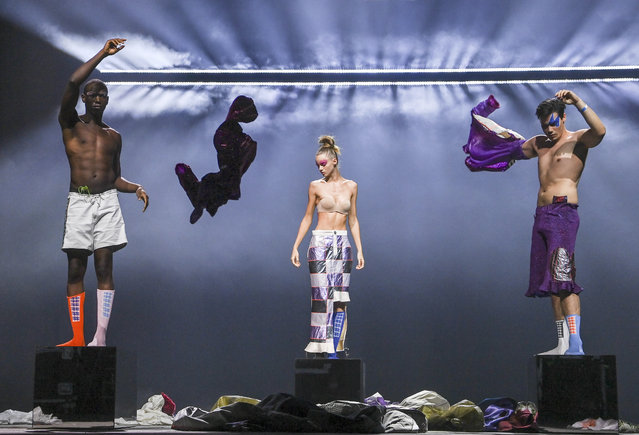 Models show off at the “Fashion Open Studio x MBFW” in creations of the label #Damur for the fall/winter season 2021/2022 during the Mercedes-Benz Fashion Week at Kraftwerk, which they take off for a video recording in Berlin, Germany, Tuesday, January 19, 2021. This year the Berlin Fashion Week takes place on the internet, the shows are shown online because of the pandemic. (Photo by Jens Kalaene/dpa via AP Photo) 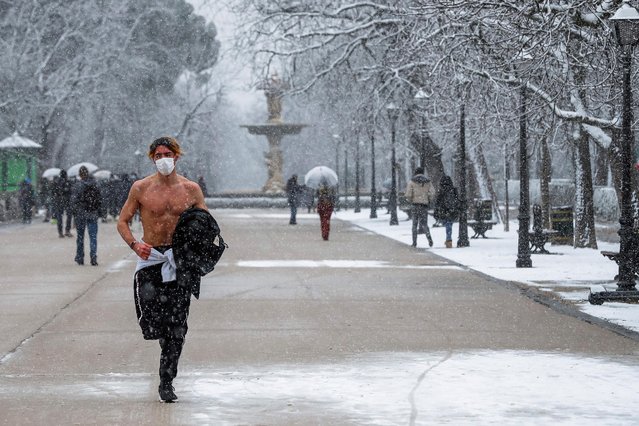 A shirtless runner excercises during a heavy snowfall at El Retiro Park, in Madrid, Spain, 07 January 2021. A warning has been issued across the country due to storm Filomena that has caused a big drop in temperatures and snowfalls throughout Spain, except for the Canary Islands. (Photo by Emilio Naranjo/EPA/EFE) 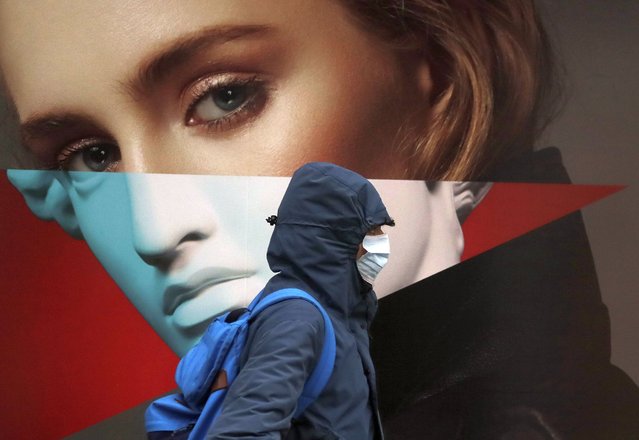