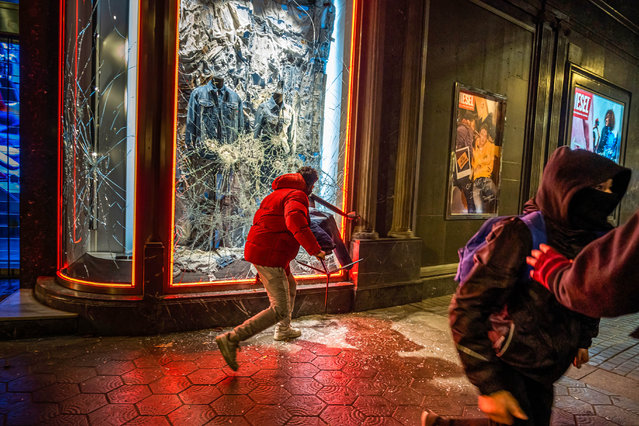 Protestors break the window of the Diesel store on Passeig de Gràcia in Barcelona, Spain on February 20, 2021 during the demonstration in response to the arrest and imprisonment of rapper Pablo Hasél who is accused of exalting terrorism and insulting the crown with the content of the lyrics of his songs. (Photo by Paco Freire/SOPA Images/Rex Features/Shutterstock) 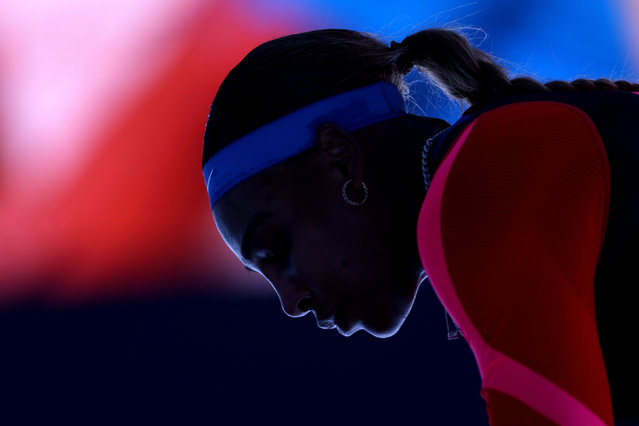 Serena Williams during her second round match against Serbia’s Nina Stojanovic at the Australian Open in Melbourne, Australia on February 10, 2021. (Photo by Loren Elliott/Reuters) 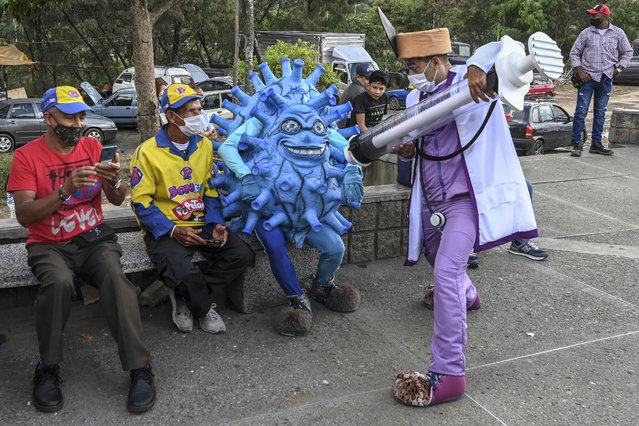 Artists perform during a campaign to promote vaccination against COVID-19 amid the novel coronavirus pandemic, in Medellin, Colombia, on February 19, 2021. (Photo by Joaquin Sarmiento/AFP Photo) 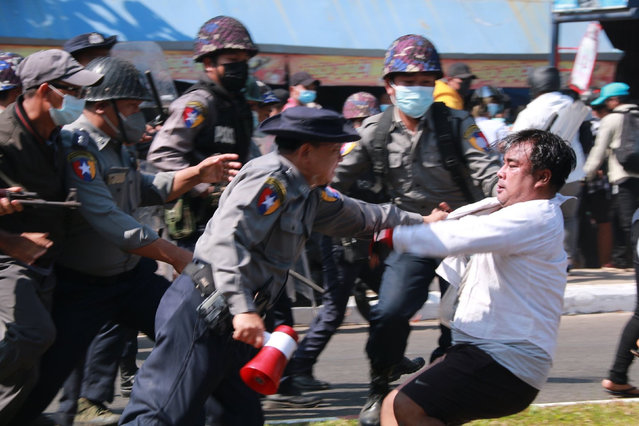 Police arrest a protester during a demonstration against the military coup in Mawlamyine in Mon State on February 12, 2021. (Photo by AFP Photo/Stringer) 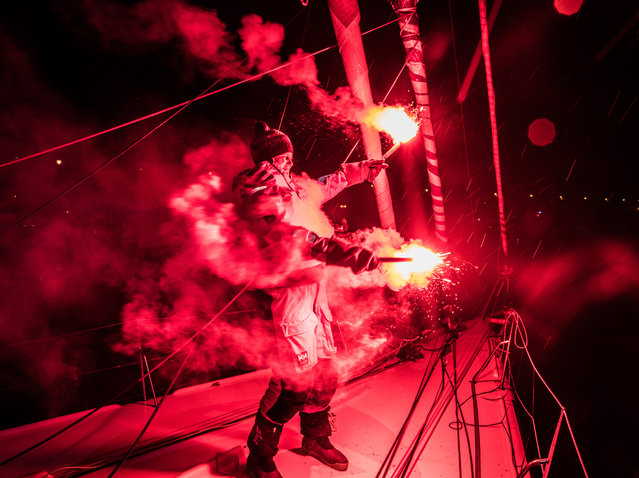 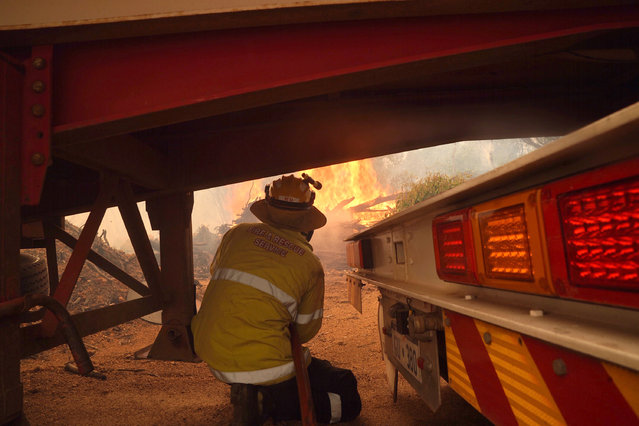 In this photo provided by Department of Fire and Emergency Services, a firefighter shelters under a truck and trailer as he works at a fire near Wooroloo, northeast of Perth, Australia, Tuesday, February. 2, 2021. An out-of-control wildfire burning northeast of the Australian west coast city of Perth has destroyed dozens of homes and was threatening more. (Photo by Evan Collis/DFES via AP Photo) 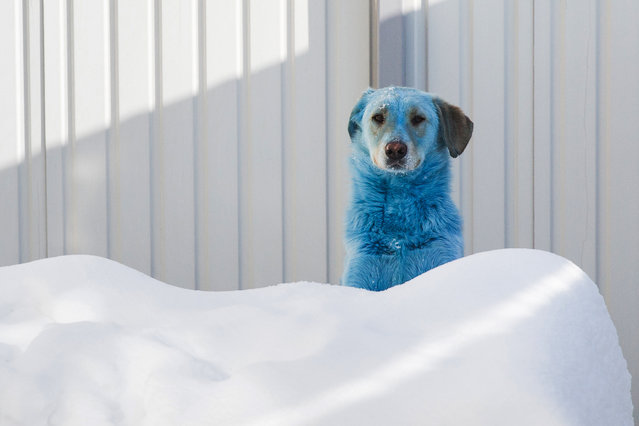 A dog at the Zoozashchita-NN veterinary clinic in Nizhny Novgorod, Russia on February 19, 2021. On February 13, 13 stray dogs with bright blue fur were found and caught at the Dzerzhinskoye Steklo (Dzerzhinsk Glass) factory producing acrylic glass and prussic acid in the city of Dzerzhinsk. The dogs' fur tested positive for the Prussian blue pigment; now the dogs are under supervision at the Zoozashchita-NN vet clinic in Nizhny Novgorod. (Photo by Mikhail Solunin/TASS) 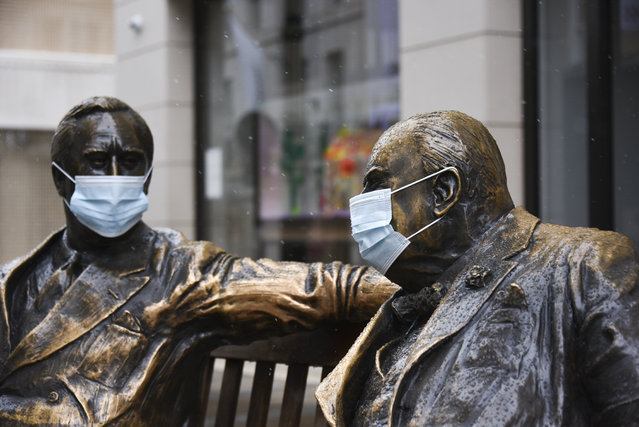 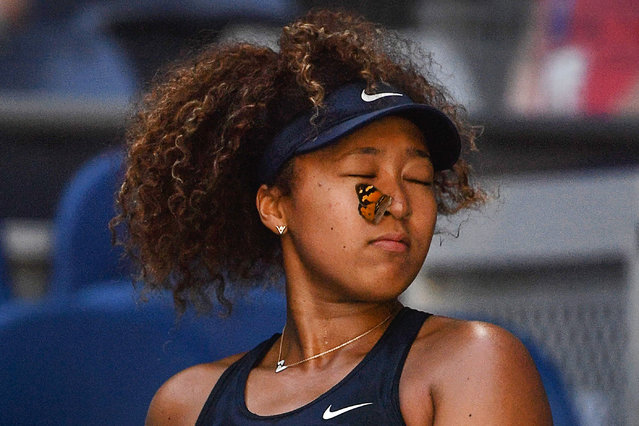 A butterfly lands on Japan's Naomi Osaka as she plays against Tunisia's Ons Jabeur during their women's singles match on day five of the Australian Open tennis tournament in Melbourne on February 12, 2021. (Photo by Paul Crock/AFP Photo) 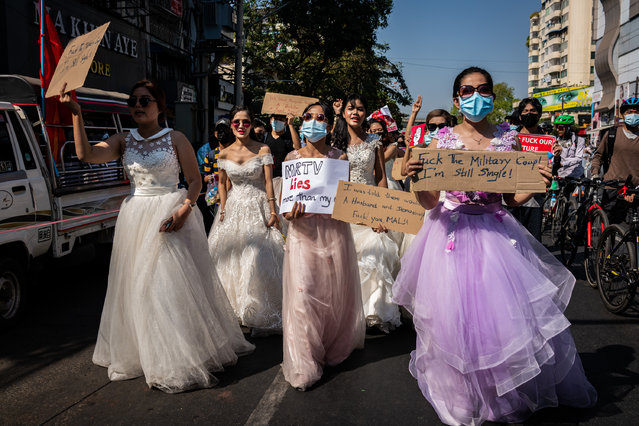 Protesters dressed in bridal costumes take part in a march against the military coup on February 10, 2021 in Yangon, Myanmar. Myanmar declared martial law in parts of the country, including its two largest cities, as massive protests continued to draw people to the streets a week after the country's military junta staged a coup against the elected National League For Democracy (NLD) government and detained de-facto leader Aung San Suu Kyi. Police fired rubber bullets, tear gas, and water cannon to disperse protesters at demonstrations across the country, and at least two people were in critical condition from the injuries sustained. (Photo by Hkun Lat/Getty Images) 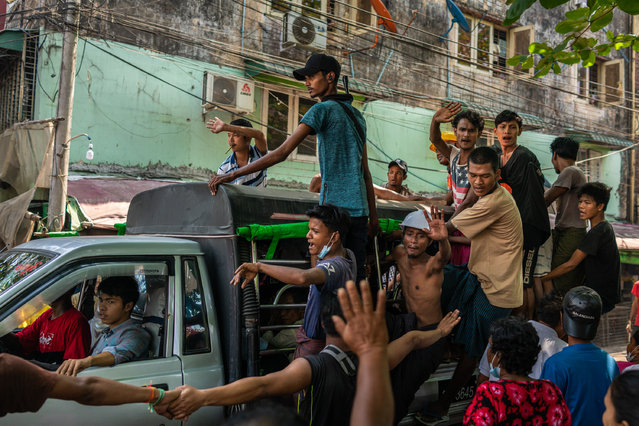 Residents of the Thein Phyu Train Station ward transport detained pro-military supporters, who the residents said had used weapons such as slingshots against them, on February 25, 2021 in Yangon, Myanmar. Supporters of the military junta that staged a coup against Aung San Suu Kyi's National League for Democracy (NLD) government marched in Yangon on Thursday. Some supporters carried knives and other weapons, and clashed with residents who support the deposed NLD. They also attacked members of the media, local news reports said. (Photo by Hkun Lat/Getty Images) 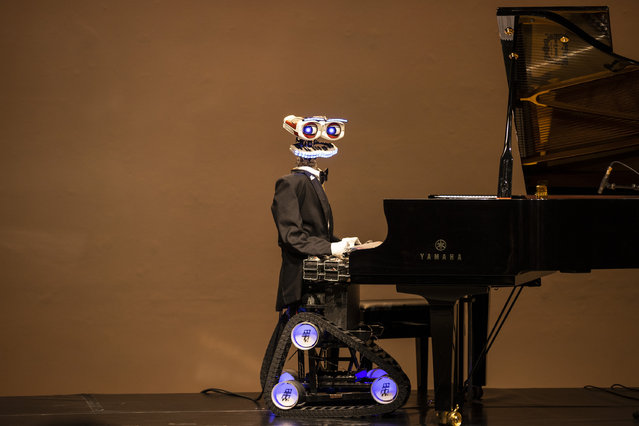 The online show Guess who I Play With Tonight with the robot TeoTronico in Milan, Italy on February 14, 2021. (Photo by Francesco Bozzo/Rex Features/Shutterstock) 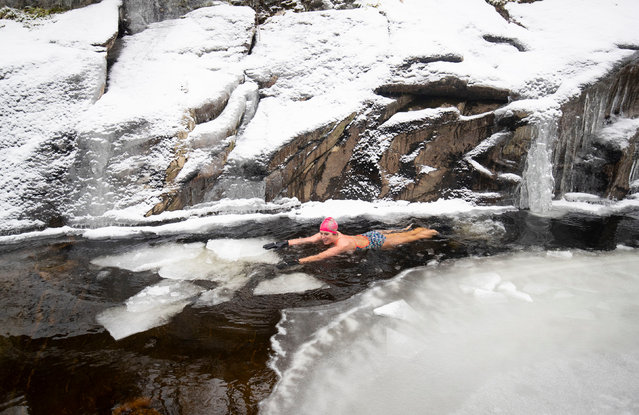 Alice Goodridge, from Newtonmore, swims the frozen waters of the River Calder in Glen Banchor in the Cairngorms National Park, United Kingdom on Thursday February 4, 2021. (Photo by Jane Barlow/PA Images via Getty Images) 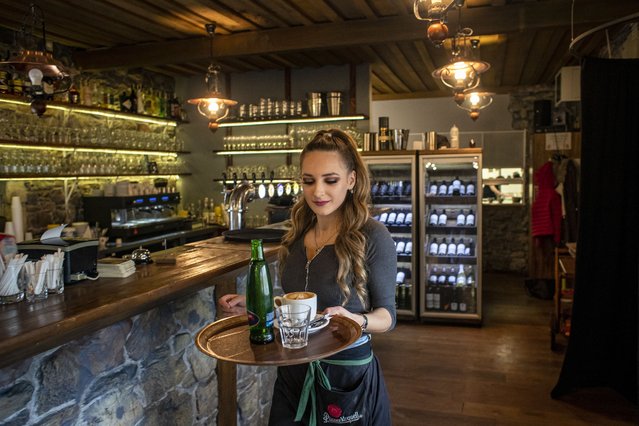 A waitress brings drinks to customers at Seberak restaurant in Prague, Czech Republic, 04 February 2021. Jakub Olbert, owner of Seberak restaurant and co-founder of Chcipl pes movement, opened his restaurant in protest against Czech government's coronavirus measures. The Czech government decided all restaurants closed from 18 December 2020 due to restrictions in connection with the COVID-19 pandemic caused by the SARS-CoV-2 coronavirus. (Photo by Martin Divisek/EPA/EFE) 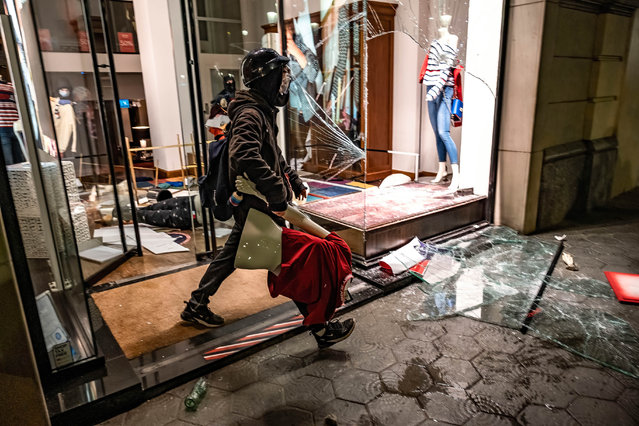 Looters are seen leaving the stores on Passeig de Gràcia taking a large number of articles of clothing during the demonstration in Barcelona, Spain on February 20, 2021. Fifth night of protests and riots in response to the arrest and imprisonment of rapper Pablo Hasel accused of exalting terrorism and insulting the crown for the content of the lyrics of his songs. (Photo by Paco Freire/SOPA Images/Rex Features/Shutterstock) 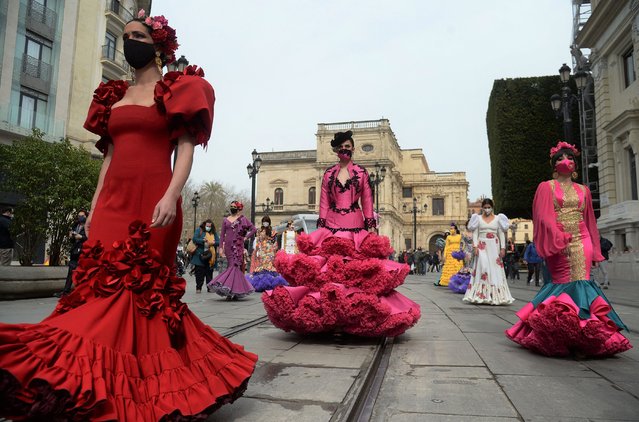 Models and dancers dressed in flamenco dresses march during a protest to shed light on the difficulties the flamenco fashion sector is facing over coronavirus restrictions, in Seville on February 26, 2021. (Photo by Cristina Quicler/AFP Photo) 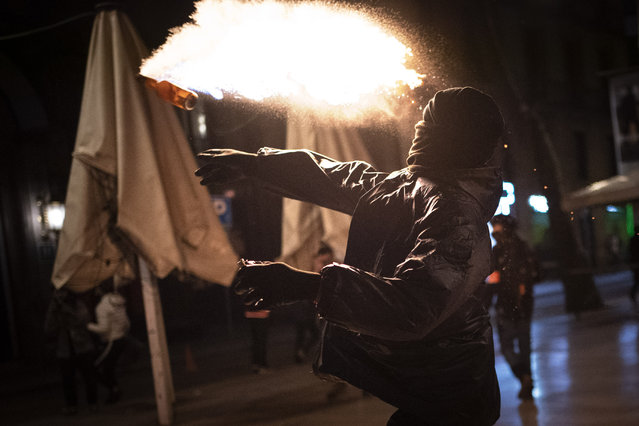 A protestor throws a molotov cocktail at police during clashes following a protest condemning the arrest of rap singer PPablo Hasél in Barcelona, Spain, Saturday, February 27, 2021. After a few days of calm, protests have again turned violent in Barcelona as supporters for a jailed Spanish rapper went back to the streets. (Photo by Emilio Morenatti/AP Photo) 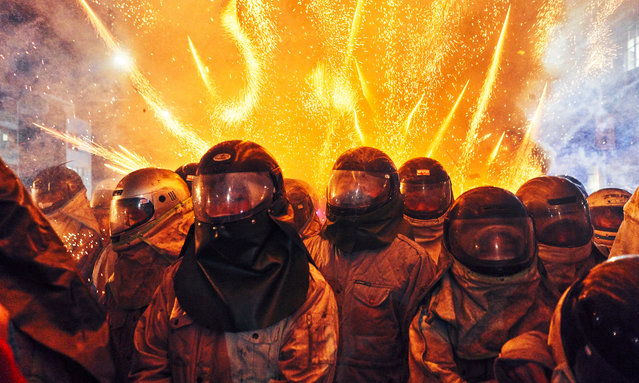 Participants of the Yanshui Beehive Fireworks Festival, with their backs to the fireworks, as the large cart of fireworks go off on February 26, 2021 in Tainan, Taiwan. The Yanshui Beehive Fireworks Festival is an annual tradition held on the 15th day after the beginning of the Lunar New Year in Tainan City for over 130 years. Located in Yanshui District, it is regarded as one of the most dangerous fireworks festivals in the world. Participants wear motorcycle helmets, fire-retardant clothing and thick gloves, with hundreds of thousands of firecrackers going off at the same time. According to Taiwan's Tourism Bureau, the 'beehive fireworks' festival started in 1885 as a request to the gods to spare the area from a cholera outbreak that was making its way through the villages. Future generations followed this tradition. It is believed that the “baptism of fireworks” gets rid of calamities while bringing good fortune in the new lunar year. (Photo by An Rong Xu/Getty Images) 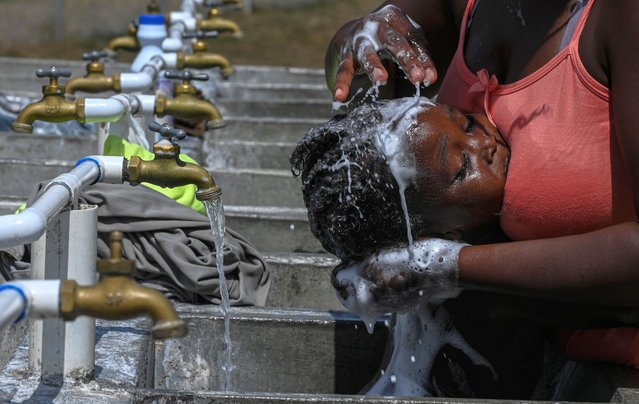 A migrant bathes his child at the San Vicente Migrants Reception Station (SRM) in Meteti, Darien Province, in Panama on February 9, 2021. Migrants from Haiti and several African countries are stranded at the Panama-Colombia border, while the Central American country is expecting a new wave of migrants. (Photo by Luis Acosta/AFP Photo) 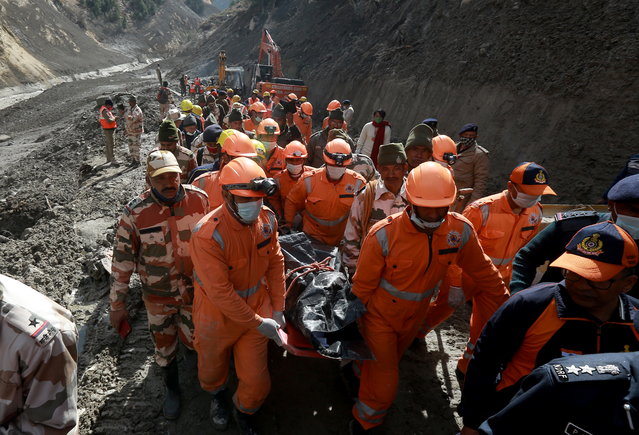 Members of National Disaster Response Force (NDRF) carry the body of a victim after recovering it from the debris during a rescue operation outside a tunnel after a part of a glacier broke away, in Tapovan in the northern state of Uttarakhand, India, February 9, 2021. (Photo by Reuters/Stringer)
Edit Del
11 Jan 2022 07:20:00, post received 0 comments
Publication archive:
←   →
Popular tags:
All tags
Last searches: