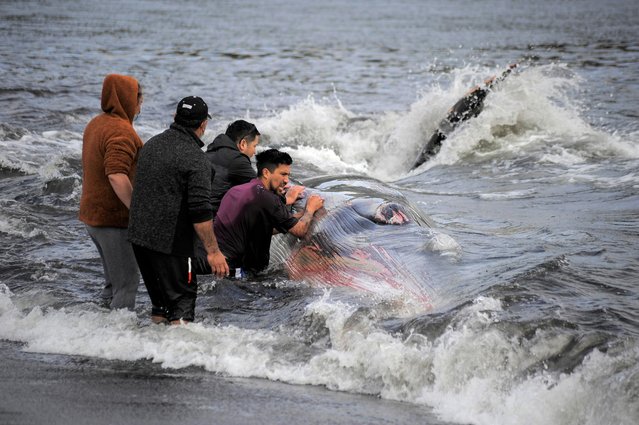 People try to return a whale to the sea after it beached itself at the shores of the fisherman's cove Lenga, near Hualpen, Chile on November 26, 2021. (Photo by Jose Luis Saavedra/Reuters) 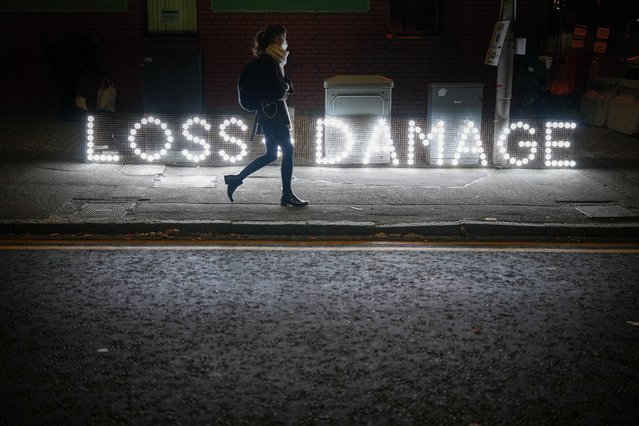 An LED installation by artist collective Still/Moving greets delegates leaving at the end of Energy Day at the COP26 climate summit at the SEC on November 04, 2021 in Glasgow, Scotland. Today COP26 will focus on accelerating the global transition to clean energy. The 2021 climate summit in Glasgow is the 26th “Conference of the Parties” and represents a gathering of all the countries signed on to the U.N. Framework Convention on Climate Change and the Paris Climate Agreement. The aim of this year's conference is to commit countries to net zero carbon emissions by 2050. (Photo by Christopher Furlong/Getty Images) 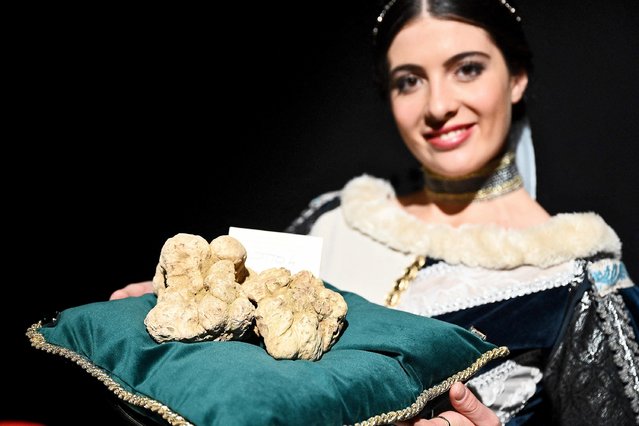 A hostess poses with a white truffle weighing 830 grams prior the to 22nd World White Truffle auction in Alba, northern Italy, on November 14, 2021. Every year for 90 years, the city of Alba hosts for nearly two months a large white truffles fair during which the auction takes place. The 830 grams truffle was auctioned in Hong Kong for 100.000 euros. (Photo by Vincenzo Pinto/AFP Photo) 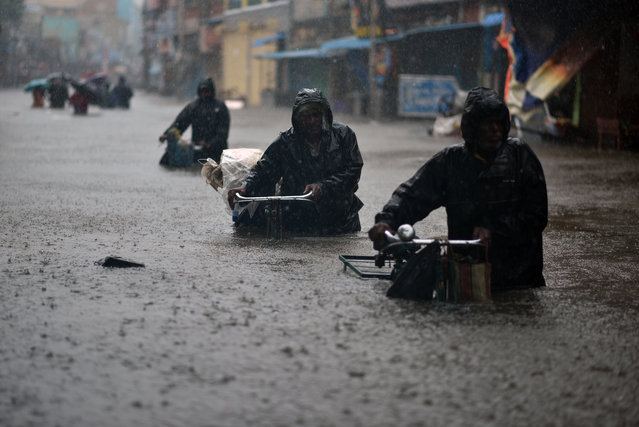 People wade with their bicycles through a waterlogged road during incessant heavy rains, in Chennai, India, 11 November 2021. The India Meteorological Department (IMD) has withdrawn red alert for extremely heavy rainfall, yet red alert remains for heavy to very heavy rainfall and high wind speed is still active in Chennai. Tamil Nadu reports 14 deaths due to heavy rains and waterlogging in several places. According to the Intergovernmental Panel on Climate Change (IPCC)'s new report, major coastal cities like Mumbai, Kochi, Visakhapatnam, and Chennai can go underwater by three feet by the end of the century. Coastal regions will see continued sea-level rise throughout the 21st century, leading to more frequent and severe coastal flooding in low-lying areas. More than 200 scientists told the UN Climate Change Conference COP 26 summit on 11 November 2021 to take immediate action to halt global warming as they warn in an open letter that some climate change impacts were irreversible for generations. (Photo by Idrees Mohammed/EPA/EFE) 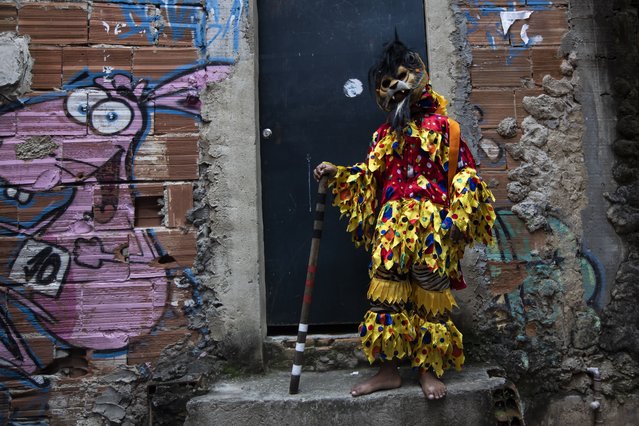 A boy dressed as a clown waits for the start of the meeting of the Kings' Revelry groups in the Santa Marta favela, as part of cultural events celebrating Black Awareness month, in Rio de Janeiro, Brazil, Saturday, November 13, 2021. (Photo by Bruna Prado/AP Photo) 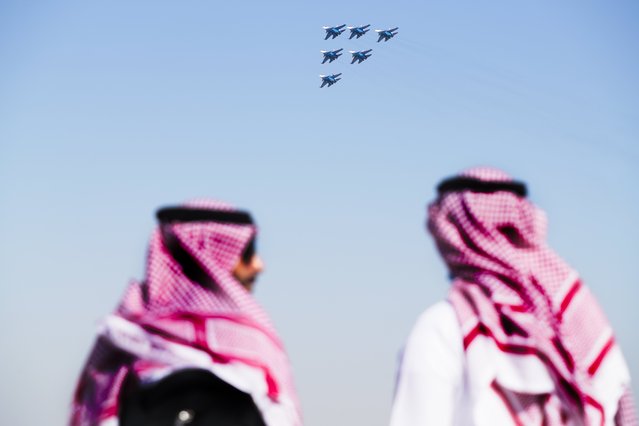 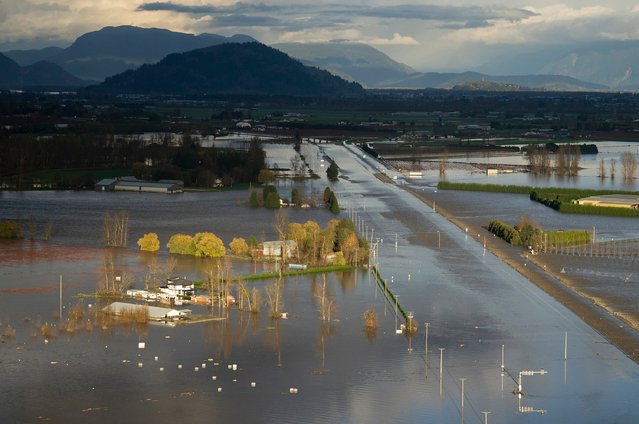 Rising flood water surround a home and cover Highway 1 in Abbotsford, British Columbia, Tuesday, November 16, 2021. Abbotsford Mayor Henry Braun said impassable highways were creating havoc in his city as police and firefighters tried to get people to evacuation centers. Sunny skies followed two days of torrential storms that dumped the typical amount of rain that the city gets in all of November, but the mayor said the water was still rising and Highway 1 would be cut shut down for some time. (Photo by Jonathan Hayward/The Canadian Press via AP Photo) 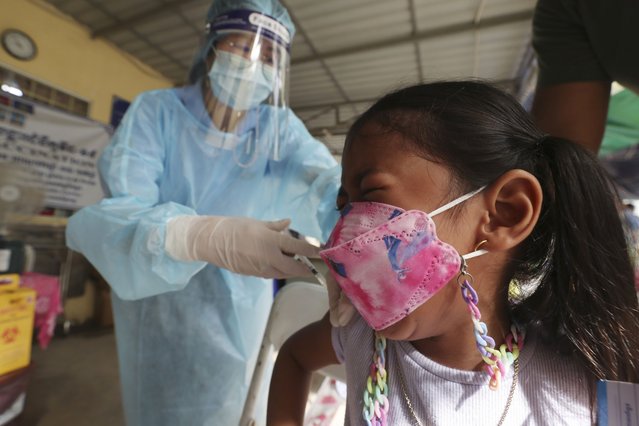 A young girl receives a shot of the Sinovac's COVID-19 vaccine at a Krang Thnong health center outside Phnom Penh, Cambodia, Monday, November 1, 2021. Cambodia on Monday began vaccinating 5-year-old children against the coronavirus as its leader announced the official reopening of the country, including the phased reentry of tourists. (Photo by Heng Sinith/AP Photo) 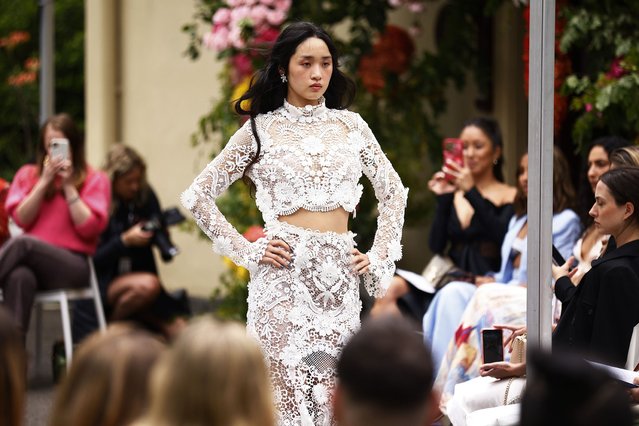 A model walks the runway during the Secret Garden Runway on November 15, 2021 in Melbourne, Australia. (Photo by Daniel Pockett/Getty Images) 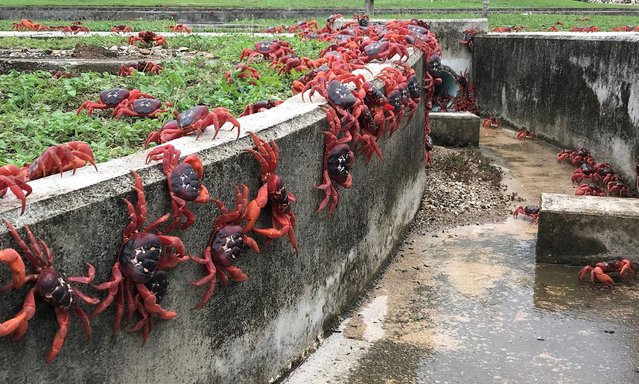 In this handout image provided by Parks Australia, thousands of red crabs are seen walking in a drain on November 23, 2021 in Christmas Island. The annual migration of red crabs begins with first rains of the wet season on Christmas Island, usually around October or November. Millions of the red crabs make their way across the island to the ocean to mate and spawn. (Photo by Parks Australia via Getty Images) 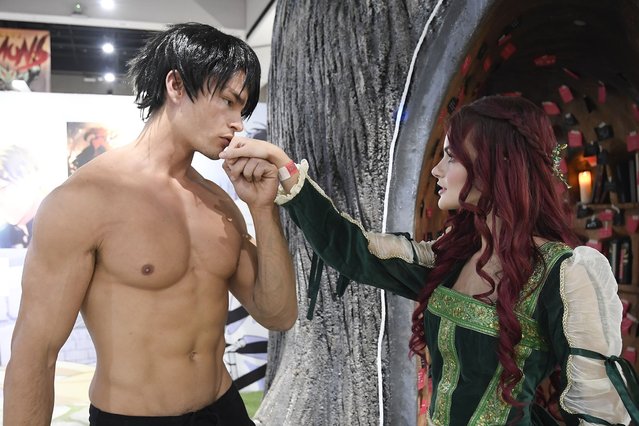 Actors pose as they promote the series “Under the Oak Tree” in the exhibit hall on Day 2 of Comic-Con International on Saturday November 27, 2021, in San Diego. (Photo by Denis Poroy/Invision/AP Photo) 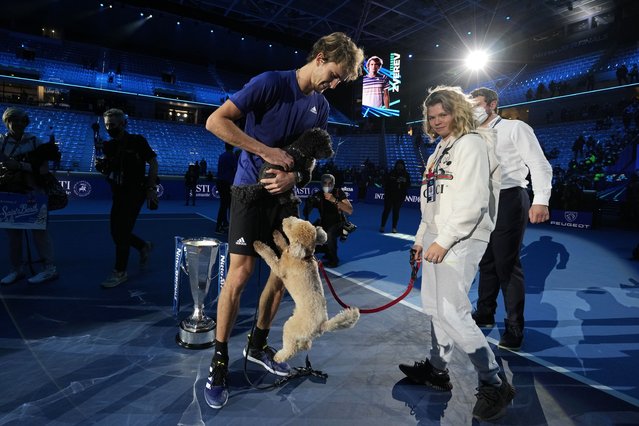 U.S. first lady Jill Biden waves when arriving for her flight to Naples after attending events on the sidelines of the G20 summit in Rome, Monday, November 1, 2021. (Photo by Alessandra Tarantino/AP Photo) 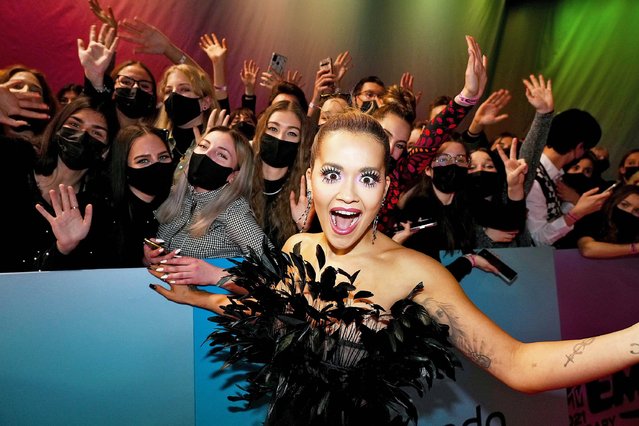 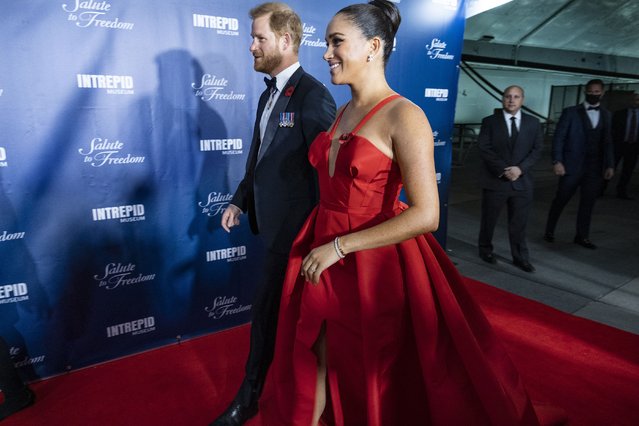 Prince Harry and Meghan Markle, Duke and Duchess of Sussex, arrive at the Intrepid Sea, Air & Space Museum for the Salute to Freedom Gala Wednesday, November 10, 2021, in New York. The Duchess of Sussex has apologized for misleading a British court about the extent of her cooperation with the authors of a sympathetic book about her and Prince Harry. The former Meghan Markle sued a U.K. newspaper for publishing a letter she wrote to her estranged father, Thomas Markle. (Photo by Craig Ruttle/AP Photo) 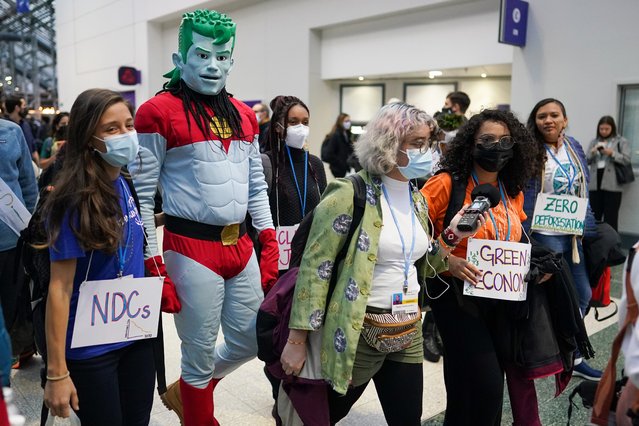 Environmental campaigners walk through the central concourse on day twelve of the COP26 at SECC on November 11, 2021 in Glasgow, Scotland. Day twelve of the 2021 COP26 climate summit in Glasgow will focus on advancing action in the places we live, from communities to cities and regions. This is the 26th “Conference of the Parties” and represents a gathering of all the countries signed on to the U.N. Framework Convention on Climate Change and the Paris Climate Agreement. The aim of this year's conference is to commit countries to net-zero carbon emissions by 2050. (Photo by Ian Forsyth/Getty Images) 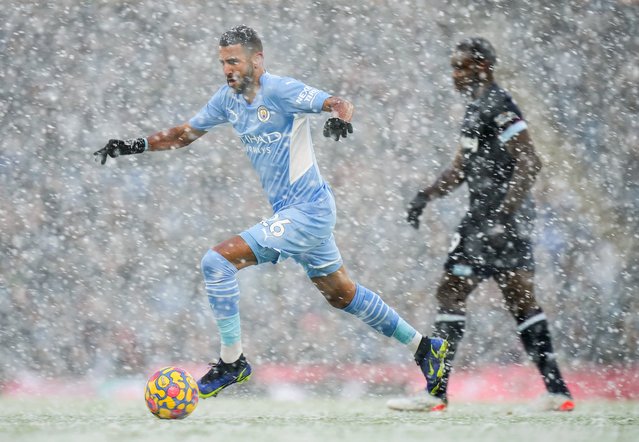 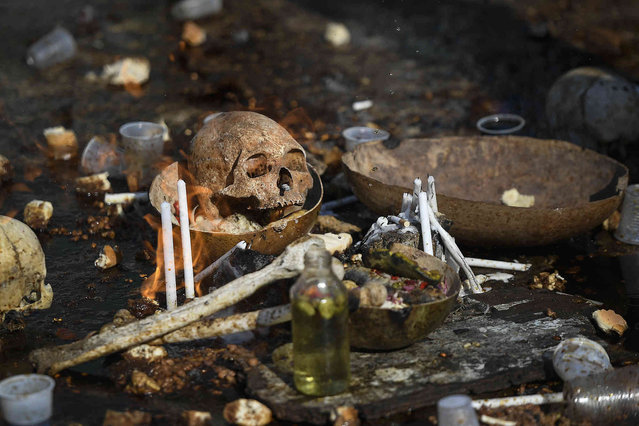 A skull sits on the ground as part of an altar during ceremoies honoring the Haitian Voodoo spirit of Baron Samdi and Gede at the National Cemetery in Port-au-Prince, Haiti, Monday, November 1 2021. Followers of Voodoo join the Fete Gede celebration of the spirits, equivalent to the Roman Catholic festivity of the Day of the Dead and All Saints Day. (Photo by Matias Delacroix/AP Photo) 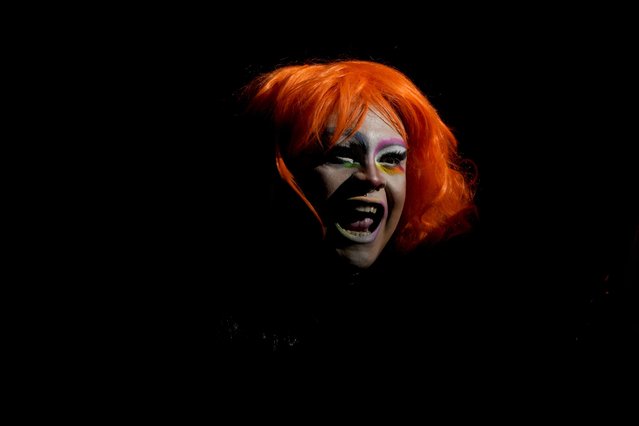 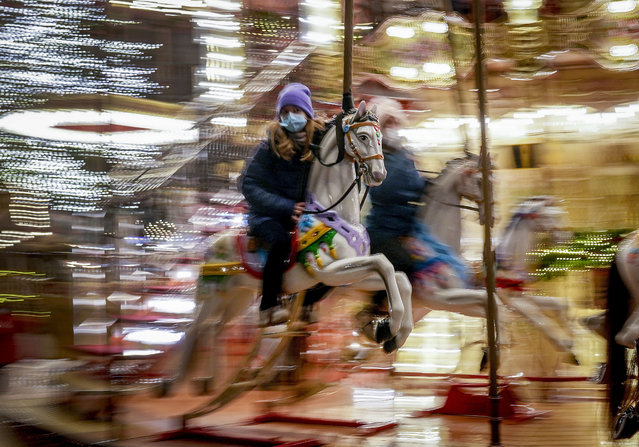 A girl rides on a merry-go-round on the first day of the Christmas market in Frankfurt, Germany, Monday, November 22, 2021. Despite the pandemic inconveniences, stall owners selling ornaments, roasted chestnuts and other holiday-themed items in Frankfurt and other European cities are relieved to be open at all for their first Christmas market in two years, especially with new restrictions taking effect in Germany, Austria and other countries as COVID-19 infections hit record highs. (Photo by Michael Probst/AP Photo)
Edit Del
13 Jul 2022 05:39:00, post received 0 comments
Publication archive:
←   →
Popular tags:
All tags
Last searches: