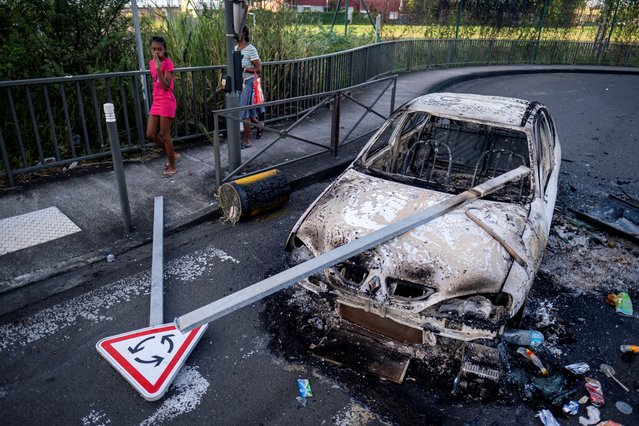 A girl reacts as she walks past a street barricade with a burned car after unrest triggered by coronavirus disease (COVID-19) curbs, which has already rocked the nearby island of Guadeloupe, in Fort-De-France, Martinique on November 26, 2021. (Photo by Ricardo Arduengo/Reuters) 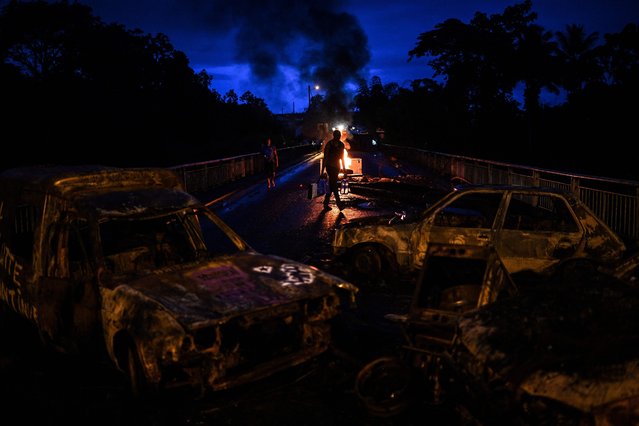 A man carries bottles of water through a road block on fire made of burnt vehicles and debris on his way to the cut-off locality of La Boucan in Sainte-Rose, in the French Caribbean island of Guadeloupe on November 30, 2021, as France's minister for overseas territories left Guadeloupe at an impasse over ways to end more than a week of violent protests sparked by Covid-19 restrictions. Unrest in the former colonial outpost began with a protest over compulsory Covid-19 vaccinations for health workers, but quickly ballooned into a broader revolt over living conditions, and spread to next door Martinique. (Photo by Christophe Archambault/AFP Photo) 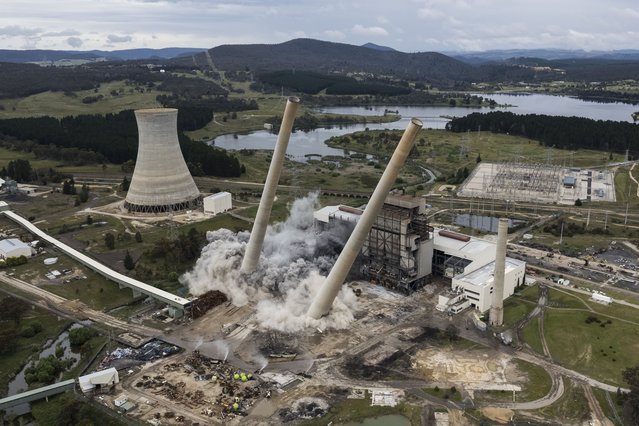 In this aerial view a controlled blast demolishes part of the old Wallerawang Powerstation on November 24, 2021 in Lithgow, Australia. Two large chimney stacks at Wallerawang Power Station were demolished by controlled blast this morning. The demolition is part of plans by to rejuvenate the decommissioned power station into a multi-use area. The Wallerawang Power Station was closed in 2014, with the site acquired by Greenspot in 2020, which plans to develop a large grid-scale battery on the old power station site. (Photo by Brook Mitchell/Getty Images) 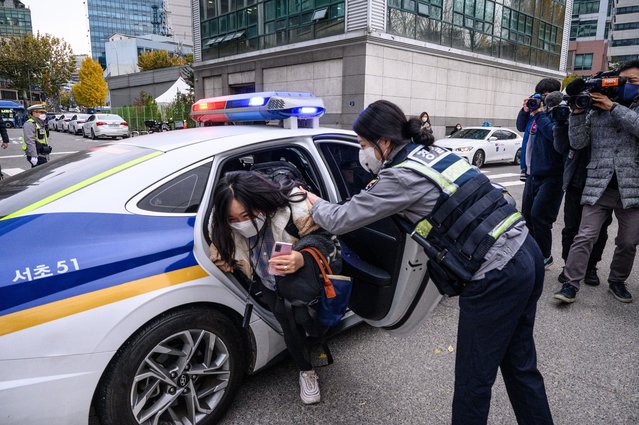 A student arrives with a police escort to sit for the annual university entrance exams outside the Ehwa Girls Foreign Language High School in Seoul on November 18, 2021. About 510,000 high school seniors and graduates across the country are expected to take the College Scholastic Ability Test. (Photo by Anthony Wallace/AFP Photo) 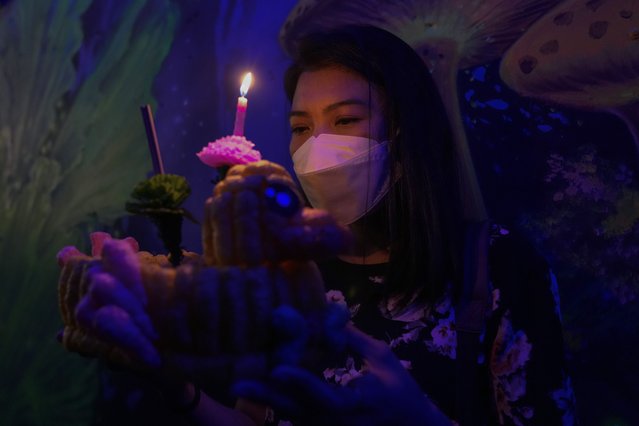 A Thai woman prays before floating a krathong, a small boat made of corn and decorated with banana leaves and flowers, into a Ong Ang canal during Loy Krathong festival in Bangkok, Thailand, Friday, November 19, 2021. Thais believe that the candle-lit boats launched during the charming and popular Loy Krathong festival can carry the year's misfortunes away with them, but workers must clean up the waterways afterward to keep them from getting clogged and polluted. (Photo by Sakchai Lalit/AP Photo) 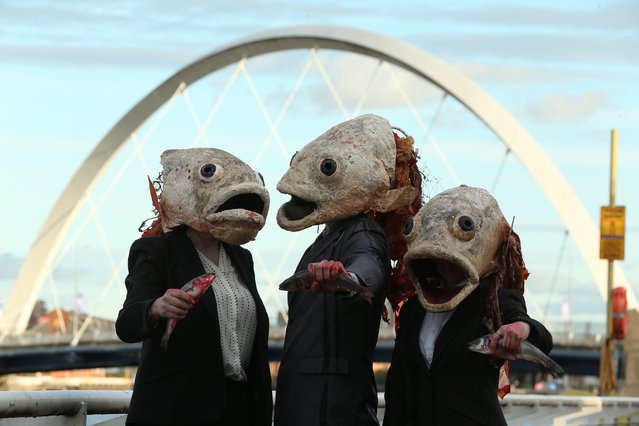 Environmental activists participate in a protest on the sidelines of the UN Climate Change Conference in Glasgow, Britain, 04 November 2021. The COP26 climate conference is being held until November 12 in the Scottish city of Glasgow. (Photo by Robert Perry/EPA/EFE) 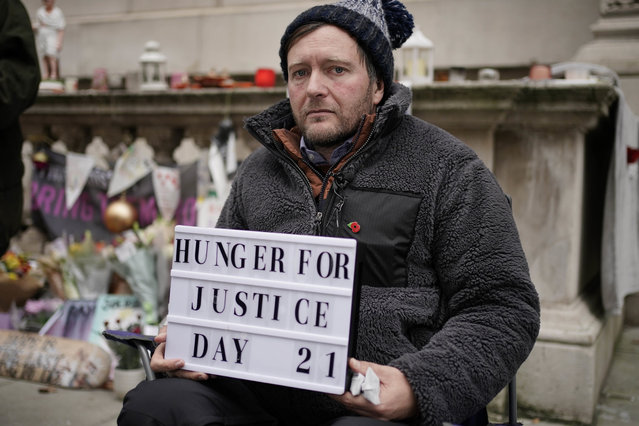 Richard Ratcliffe, the husband of Iranian detainee Nazanin Zaghari-Ratcliffe, poses for the media in London, Saturday, November 13, 2021. The husband of a British-Iranian woman who has been detained for more than five years in Iran says he is ending his hunger strike outside Britain’s Foreign Office after 21 days. Ratcliffe has been sleeping in a tent outside the Foreign Office to pressure the British government to secure the release of his wife and other British-Iranian nationals. (Photo by Aaron Chown/PA Wire via AP Photo) 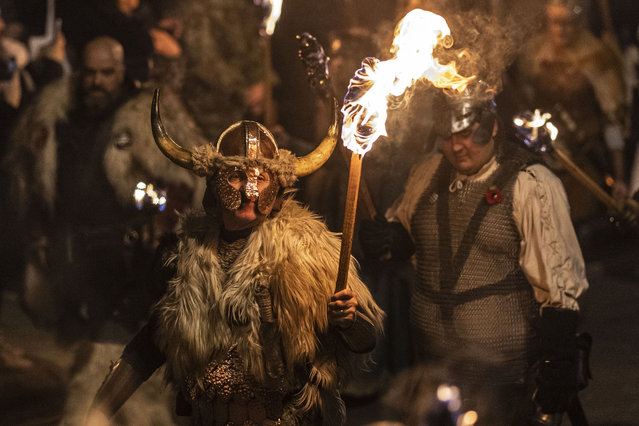 People take part in the parade at the annual Lewes Bonfire Night Celebrations on November 5, 2021 in Lewes, England. The event commemorates the memory of the seventeen Protestant martyrs as Bonfire Societies parade through the narrow streets. The evening comes to an end with the burning of effigies, or “guys” usually representing Guy Fawkes, who died in 1605 after an unsuccessful attempt to blow up The Houses of Parliament, and other topical figures. The annual parade was cancelled last year due to the Covid-19 pandemic. (Photo by Dan Kitwood/Getty Images) 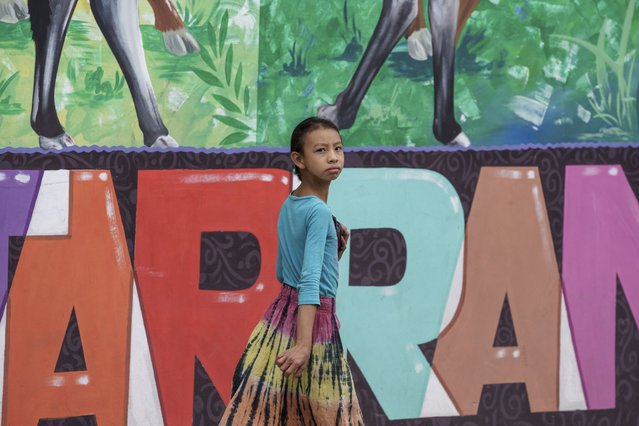 A girl walks past a mural in Cantarranas, Honduras, Saturday, November 27, 2021, one day ahead of the general elections. Political related violence prior to Sunday’s elections has reached unprecedented levels with close to 30 murders considered to have been motivated by or involving politicians. Francisco Gaitan, the mayor of Cantarranas who was seeking his fifth re-election was murdered on Nov. 13. (Photo by Moises Castillo/AP Photo) 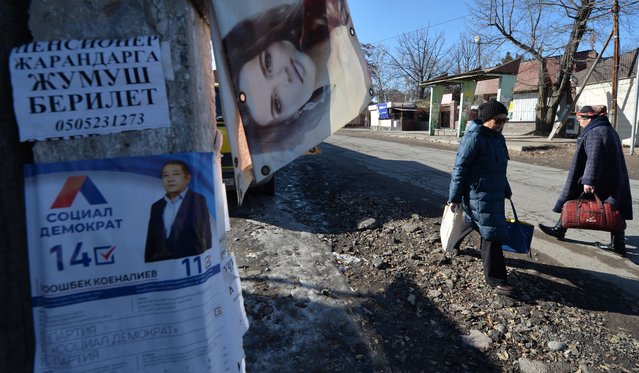 Women walk along a street near a campaign poster of a candidate in the upcoming parliamentary election in the village of Tash-Dobo, some 25km from Bishkek, on November 24, 2021. (Photo by Vyacheslav Oseledko/AFP Photo) 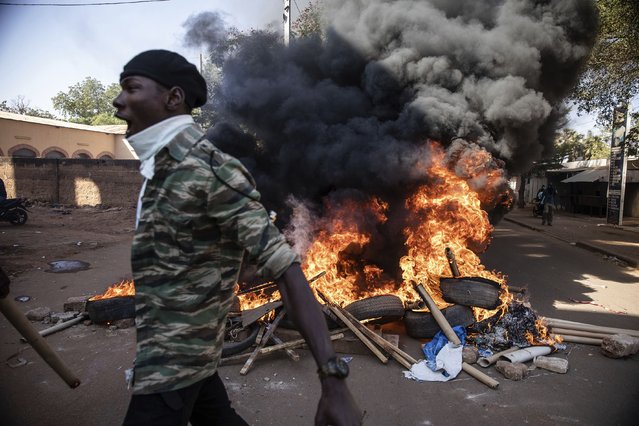 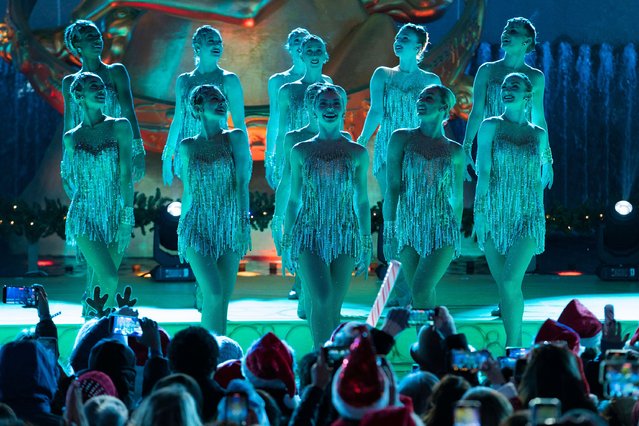 The Rockettes perform at the Rockefeller Center Christmas tree lighting ceremony in New York, US on November 30, 2021. (Photo by Ralph Bavaro/NBC/NBCU Photo Bank via Getty Images) 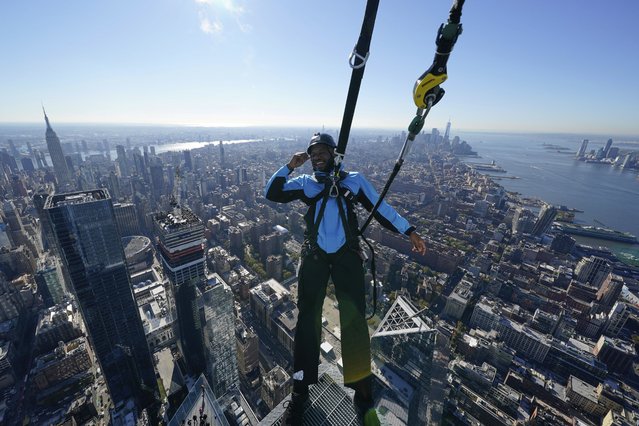 Climb guide Jason Johnson leans off the edge at the top of City Climb, a new attraction at 30 Hudson Yards in New York, Wednesday, November 3, 2021. The attraction opening Tuesday, Nov. 9 gives thrill-seekers a unique perspective on New York City from almost 1,300 feet up. At the top, a safety harness allows the climber to lean out over New York City and enjoy a panoramic view in the fresh air, unimpeded by glass. (Photo by Seth Wenig/AP Photo) 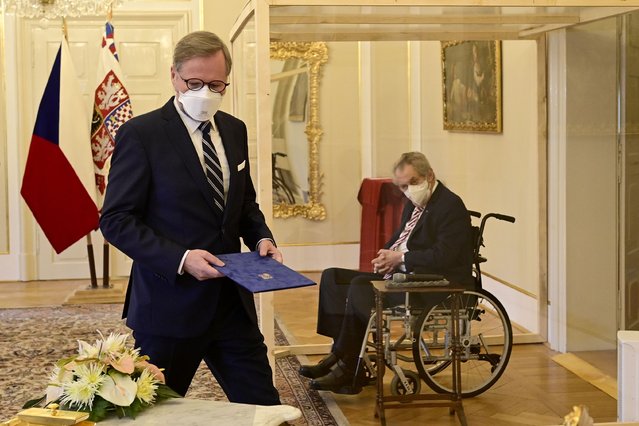 Czech President Milos Zeman, right, in a transparent cube because he tested positive to COVID-19, appoints ODS leader Petr Fiala, left, as Czech Prime Minister at the Lany manor, near Prague, Sunday, November 28, 2021. The Czech president has sworn in Petr Fiala as the country’s new prime minister following last month’s parliamentary election. Milos Zeman and Fiala, the leader of the coalition that captured most votes in the Oct 8-9 vote were separated by a clear screen during the ceremony at the presidential chateau in Lany, west of Prague, after the president tested positive for the coronavirus and must isolate. (Photo by Roman Vondrous/CTK via AP Photo) 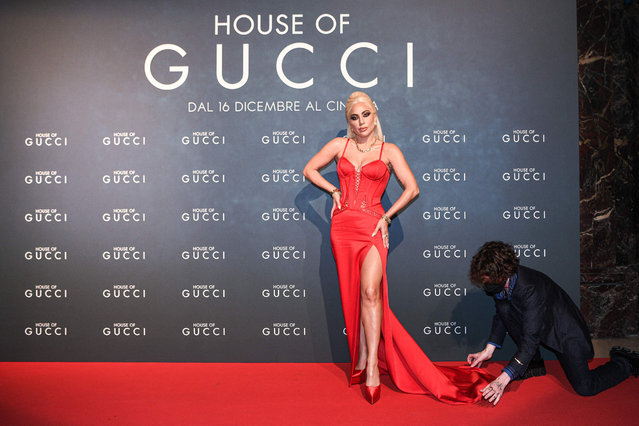 American singer and actor Lady Gaga poses on the red carpet ahead of the premiere of the film “House of Gucci”, in Milan, Italy, on November 13, 2021. (Photo by Piero Cruciatti/AFP Photo) 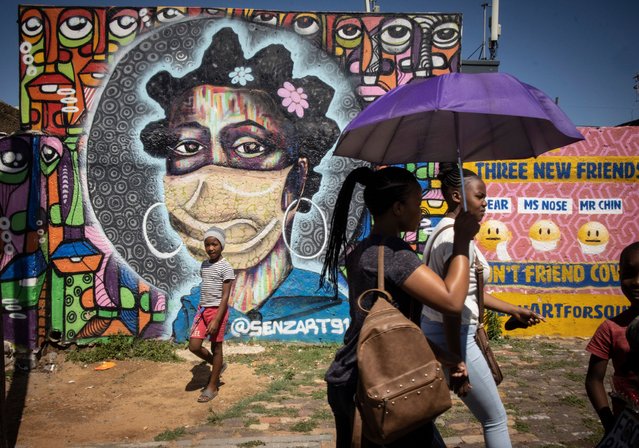 Soweto residents walk in front of an informative graffiti art work educating local Soweto residents about the dangers of the coronavirus, Johannesburg, South Africa, 30 November 2021. South Africa's government is considering mandatory vaccinations for all citizens as it tries to educate and vaccinated its population after the new Omicron variant of SARS-CoV-2, the virus that causes COVID-19, was detected. Several countries banned travel with Southern African countries including South Africa due to the Omicron variant. (Photo by Kim Ludbrook/EPA/EFE) 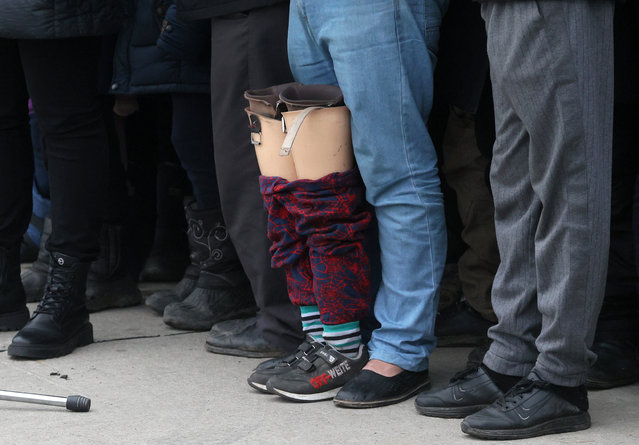 Migrants during a meeting with Belarus’ President Alexander Lukashenko by the Bruzgi Transport and Logistics Centre, some 1.5 km northeast of Kuznica Bialostocka-Bruzgi border crossing on the Belarusian-Polish border on November 26, 2021. The migrant crisis on the border of Belarus with Poland, Lithuania, and Latvia escalated on November 8. (Photo by Sergei Bobylev/TASS)
Edit Del
13 Jul 2022 05:50:00, post received 0 comments
Publication archive:
←   →
Popular tags:
All tags
Last searches: